Henrik Larsen talked about his modeling and sculpting routine, working with materials and the choice of the perfect rendering tool. 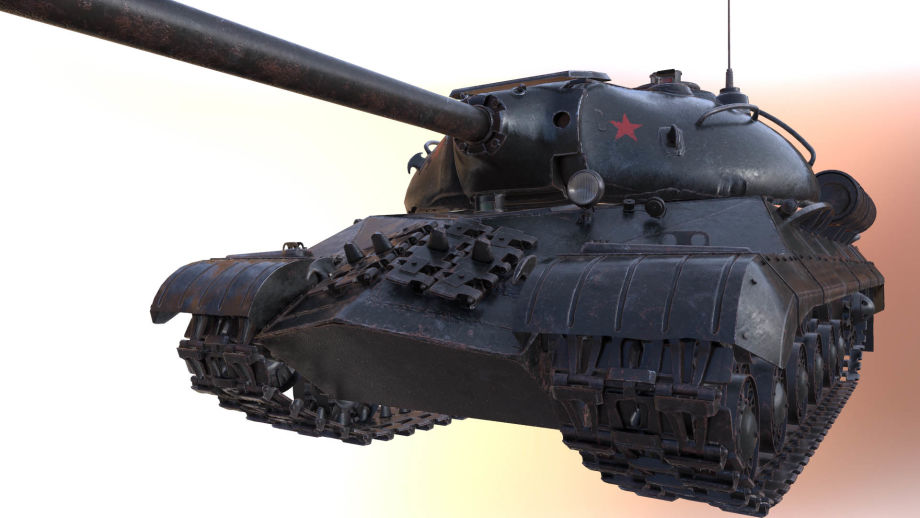 My name is Henrik Larsen, and I’m a 3D Environment Artist.  The project I began was to recreate a 1945 IS-3 Russian WWII tank in every little detail and for that, I used 3DS Max, ZBrush, Marmoset Toolbag 2, and Substance Painter 2. 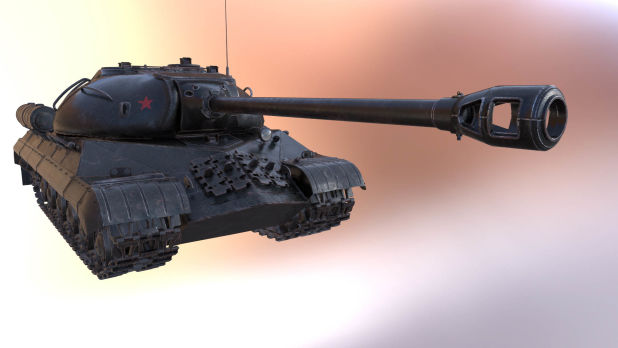 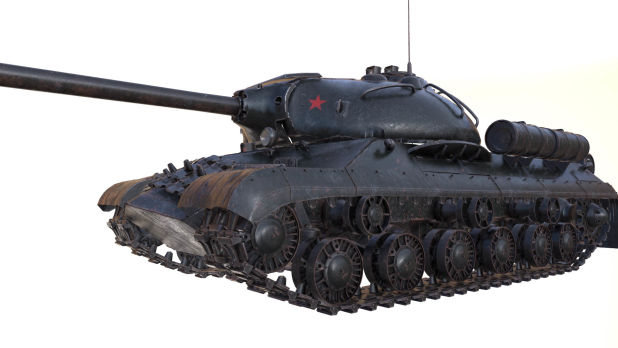 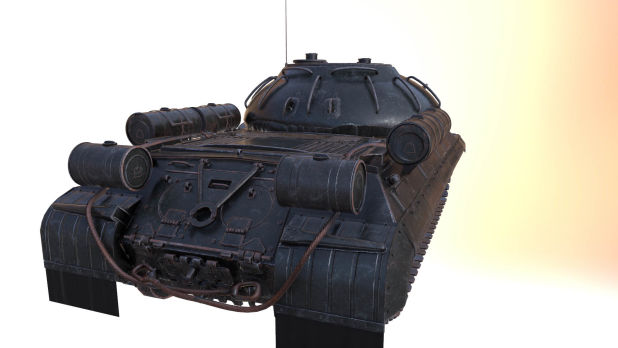 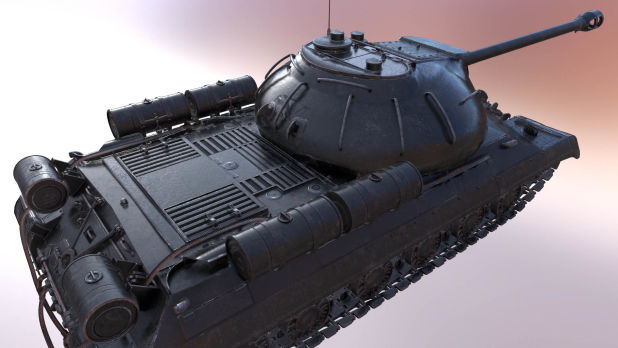 So, for a project of this kind, it always starts with collecting references.  A tank, at a glance, is a tank – an item.  But it really isn’t.  It is more like a small world in itself.  Anything is, really, if you go deep enough with the details.  There are thousands of items that altogether makes a whole, and each one of those things has to be spot on, and for the tank, there would be around 500+.

First step is blue prints: side view, top, bottom, front and back, and then lined up in the view ports.  At this stage, it is crucial that they can all be overlaid and match exactly, so as not to run into errors later on.  There can be minor differences that will get sorted out later when all the elements are in place, and that is common enough. 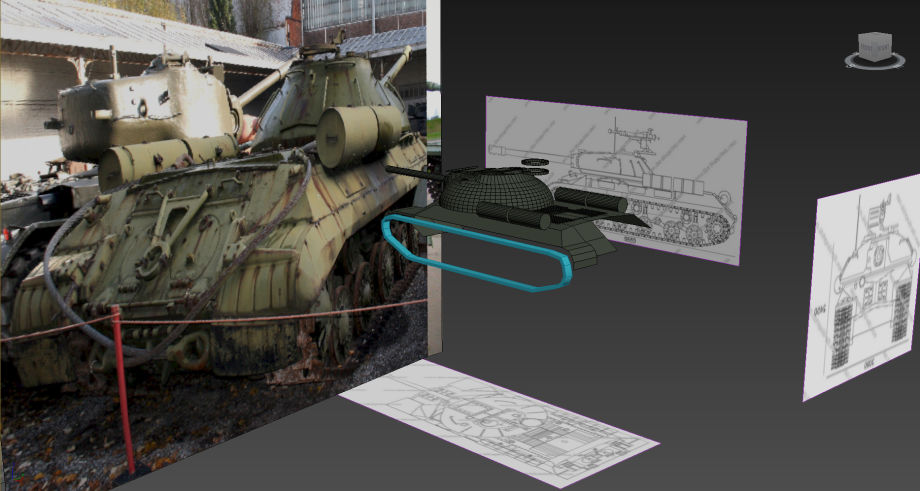 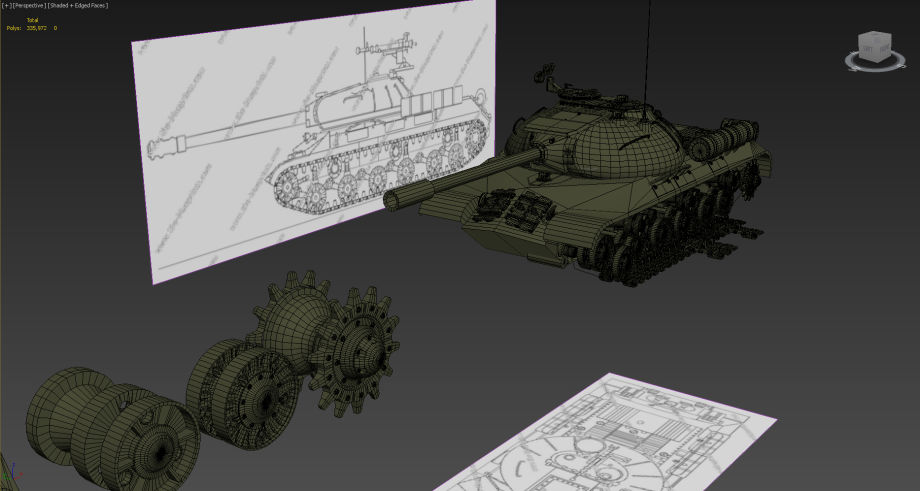 After that, it is a hunt for photographic references.  Here it is Google and a lot of browsing.  All in all, I ended up with a couple of hundreds images and found I needed more all the time.  Nothing can be guesswork, so everything – down to the bolts, had to have some reference.  For instance – the wheels.  What do they look like from the front, side and back?  What do they look like weathered?  What is behind the wheels?  What happens to the paint and metal, and in what areas?  This is often an ongoing part of a project like this and is quite time-consuming.  It can be tricky finding photos of something specific, but it’s part of the process, and if you look long enough, you will find it. 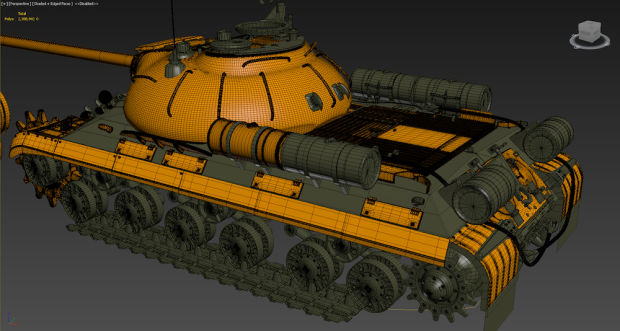 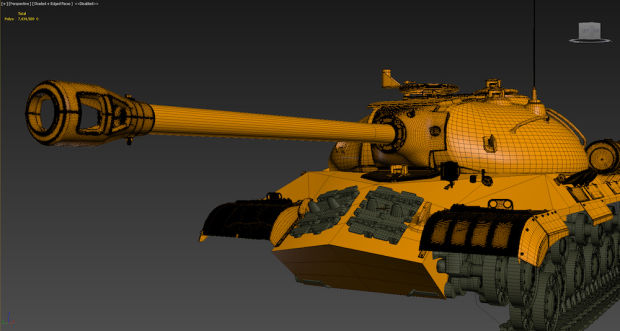 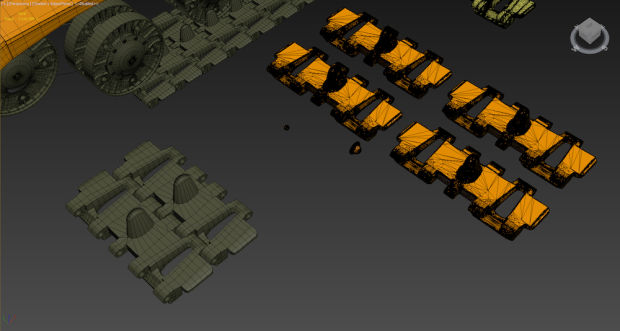 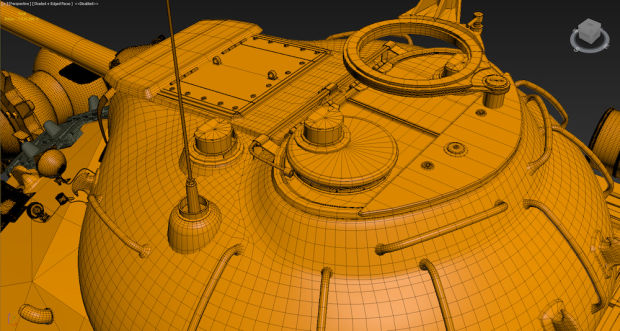 After that initial stage, it continues with a quick blocking-out of the main areas.  For instance the tracks, which at an early stage merely would be a very rough shape for placement.  Following that, the body itself is the next stage – the turret, the side panels, barrel, fuel tanks. wheels and various items, such as spare tracks on the front and back, lamp, antenna, and grills on the back – all as basic shapes (rectangles and spheres).  Nothing is detailed or fancy yet.  This is just to get something down to work around, and to place the parts of the tank at a time where there isn’t too much to undo, if needed.  In fact, it is quite important to get this right since later on it can be quite a puzzle to undo. 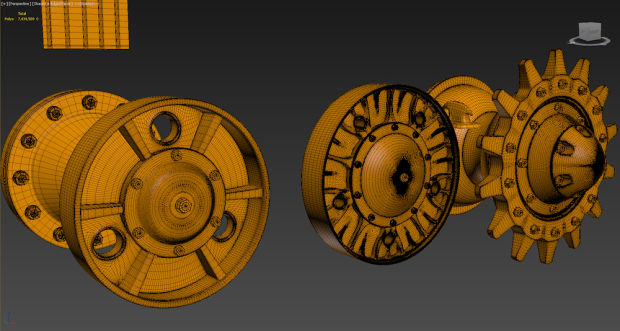 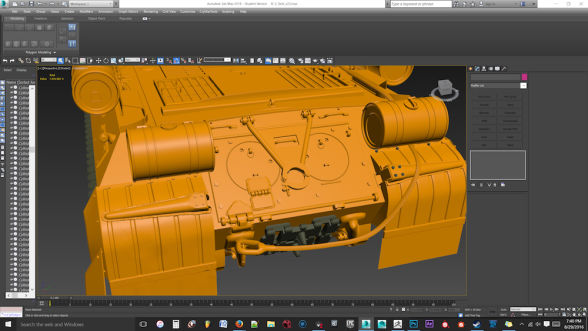 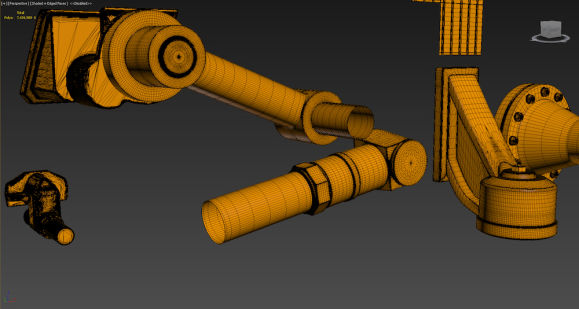 Once this is done, a mid-version is created piece by piece.  At this point, it is crucial that you’re really looking at what something looks like.  Often enough there are simple shapes behind what can look complex, and at this point, it is good to spot exactly what is going on.  The turret is a good example of this: it isn’t a dome shape in itself.  It is a dome that has been pulled forward – almost like a drop, and shaped to serve as a guide for the barrel guard.  There are ‘cuts’ in the metal – almost like a cheese scraper, having crudely sliced through the chunk of metal.  Here, the blue prints stops being useful until later, and by now it’s time to bring in the photographs.  Cross-reference all the time.  Ask yourself, “is this really how it looks?”

During this, it’s good to work smartly.  Can you make an item once, and re-use it?  The treads is one part, which was textured in 4 different variants, so as not to get obvious texture repetition.  That can then be mixed up on the tread line itself and rotated, and mirrored for further variation.  The wheels were made once, per wheel, and then rotated, and copied to the other side. 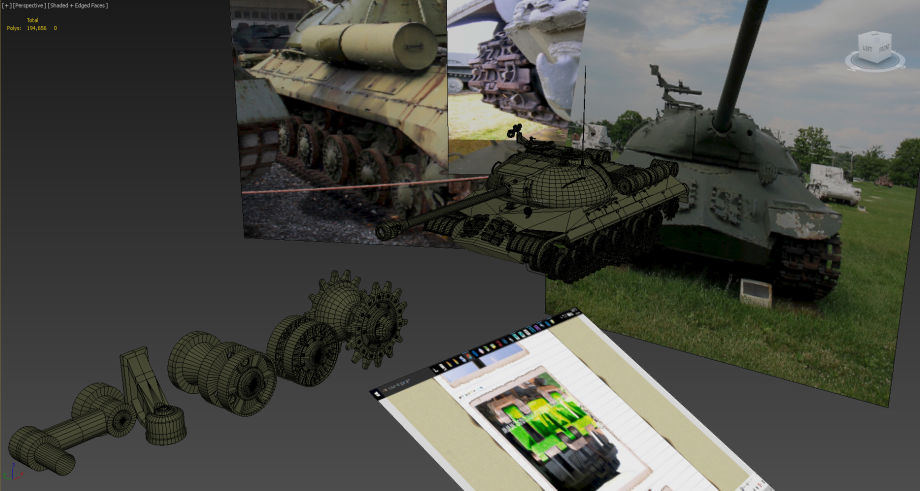 The most complicated parts of the production were the treads.  As stated above, there is usually a ‘simple’ geometry idea behind a piece, since it naturally had to be produced by people, and in a wartime situation.  So what was the pattern of the treads?  Well, first off, they had to link together.  So looking at it, they are basically one long cylinder that has been cut into sections, followed by some quite unique cut-outs.  It was these cutouts that were challenging to nail down, and by it’s nature, it all had to fit.  It was also a challenge to find good reference shots of all the various parts of the treads that weren’t in too much shade, but were clearly lit. 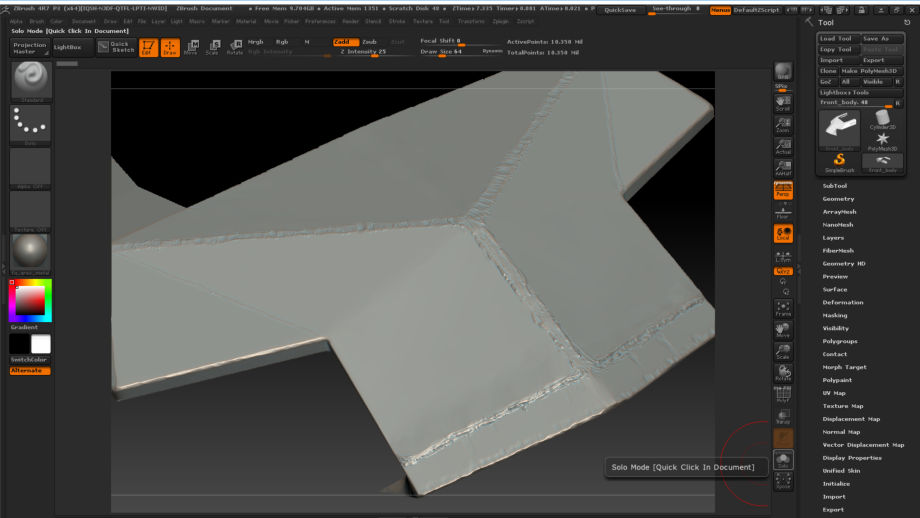 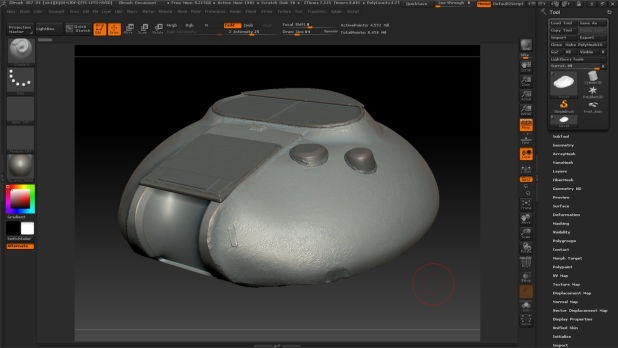 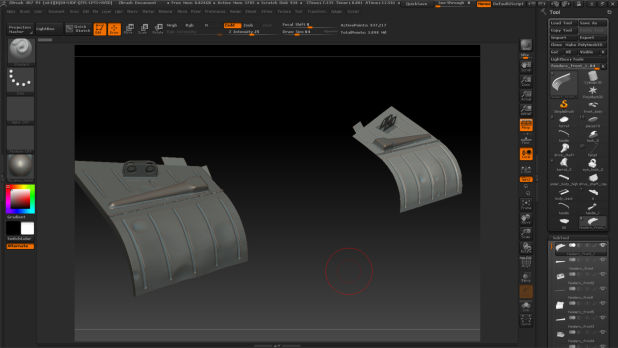 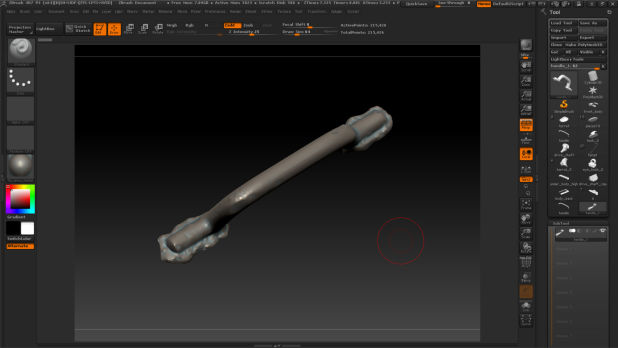 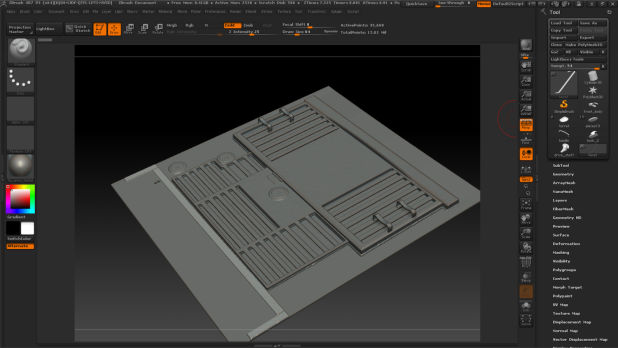 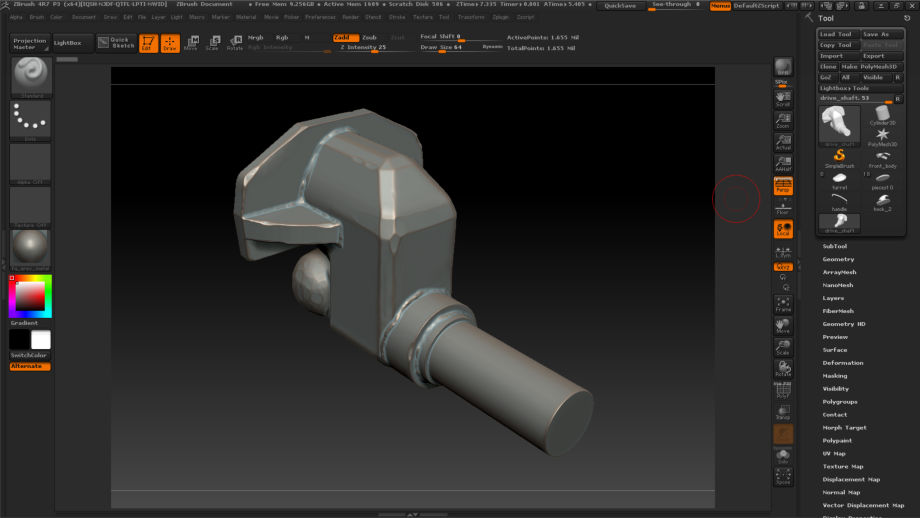 Other than that, many of the pieces were made in a base high-poly, and then brought into ZBrush for some weathering.  The turret, for instance, has a lot of wear, scrapes and dings.  Everything during the war was done roughly.  There are huge, visible welds where the metal looks to have been applied in globs, and that had to be captured just like so.  Anything that was ‘stuck’ to the tank had large visible welds, and therefore anything like that, was detailed in that fashion – so hooks, handles and any attachment.  It is something that often in 3D is ‘stuck’ into an item, but it is then often what breaks the illusion and instantly screams fake.

The materials were created in Substance Painter 2.  There are many textures for this model, as it is highly detailed.  Once you have a certain part of the tank at a certain amount of detail, you are really bound to produce the rest with similar attention to detail.

The whole tank was broken into texturing areas; the treads, the barrel, muzzle, turret, under body, front body, rear, turret pieces, side panels, wheel type and so forth.

I made the material from scratch as a base paint, slightly off and weathered brown/black/green, and made an underlying rust and steel to show through on edges and corners.  I wanted the paint to be thin, so as to have a bit of that metallic shine showing through just slightly.  For that, I based it off a museum image of an IS-3, that was black and mildly weathered.  During my reference collecting, the surviving tanks are in all sorts of colors and state of maintenance, so it was a matter of picking a look.  Some were painted all over with bright, green paint – heavily applied.  Others were desert colored, having been used in the 1960s, and others still almost rusted to a solid red.  I liked that you still could see what it was, and for anything else, it would have been too bland of a look to have gone with either the bright green, or the sand. 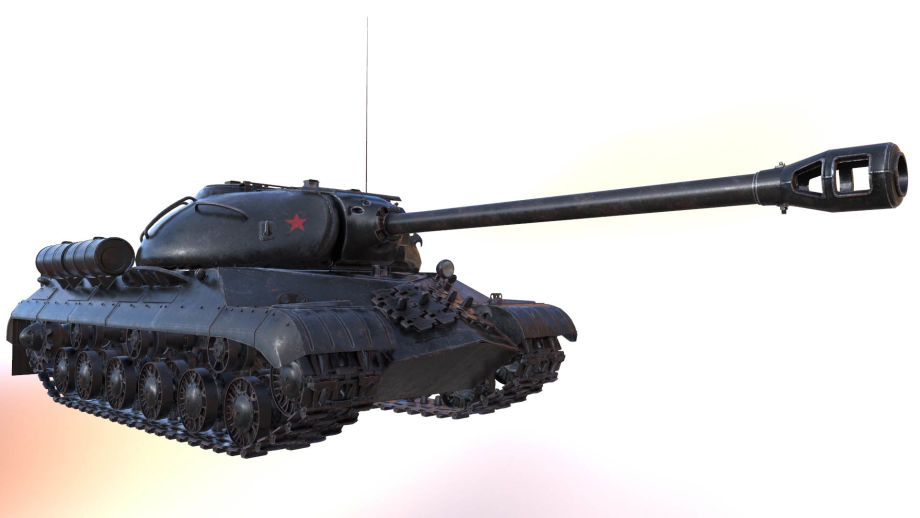 As for building these textures, I would say referring to photo references is key.  Where does weathering appear?  There are a lot of subtle, underlying colors going on in even something so ‘simple’ as black paint.  There is de-coloration, scrapes, different wear, glossy areas, and matte areas, metal imperfections, dirt painted over, rust, and exposed bright metal.  For the materials in general, it is layering, done very carefully.  For the glass, it is two planes doubled up to give a more ‘dulled’ look, and took some tweaking in Marmoset to get just right.

Marmoset was ideal for this.  It provides very flexible lighting, and is in general perfect for presentation shots.  I could, with very few tweaks, bring the textures from Substance Painter 2 into Marmoset and get very realistic results.  Lighting, of course, changes everything about how an object looks and feels, so for this I picked a natural light that with a few variations, show the tank’s true colors. 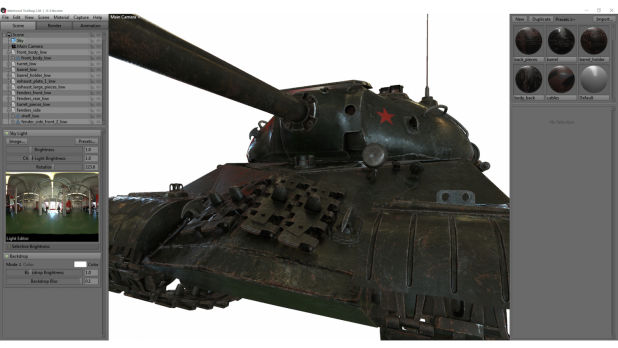 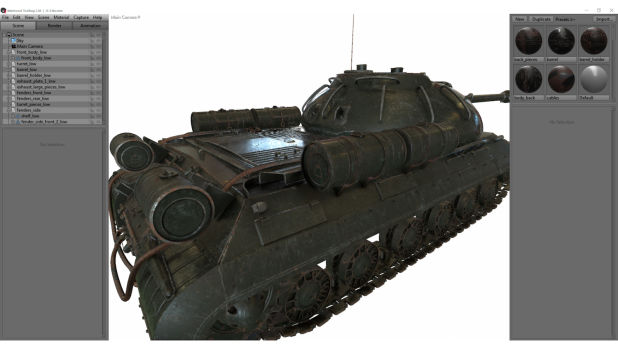 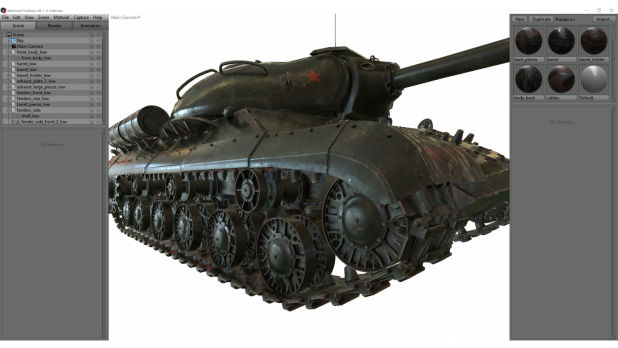 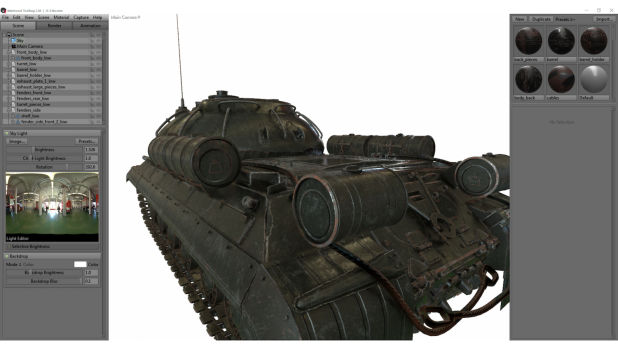 So, I hope I’ve explained as much of the process as I can.  It was a great project, and I hated to see it go.  By the time I was done, I knew the whole tank in my head – down to the amount of bolts, and their individual placement, and no longer looked at it as ‘a tank’, but a world of details and pieces.

Thanks so much for looking, and reading. 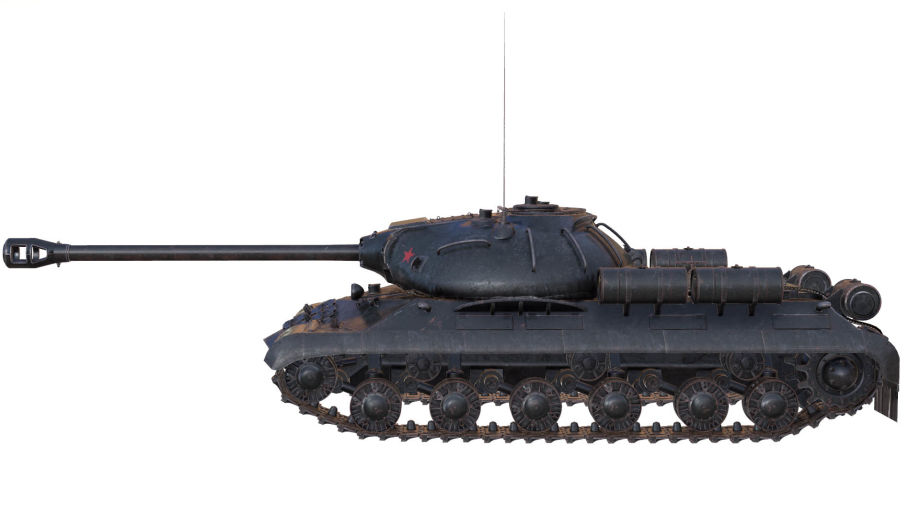