Allegorithmic talked to a talented artist, Jonathan Benainous, who is currently working on Ghost Recon: Wildlands at Ubisoft Paris. He gave a

Allegorithmic talked to a talented artist, Jonathan Benainous, who is currently working on Ghost Recon: Wildlands at Ubisoft Paris. He gave a detailed breakdown of his work and discussed his tools of choice.

I’m Jonathan Benainous. I currently work at Ubisoft Paris as Senior Environment Artist on the game Ghost Recon: Wildlands. I am in charge of  worldbuilding, terraforming, asset creation (buildings, rocks…), textures, etc. on my portion of the game. 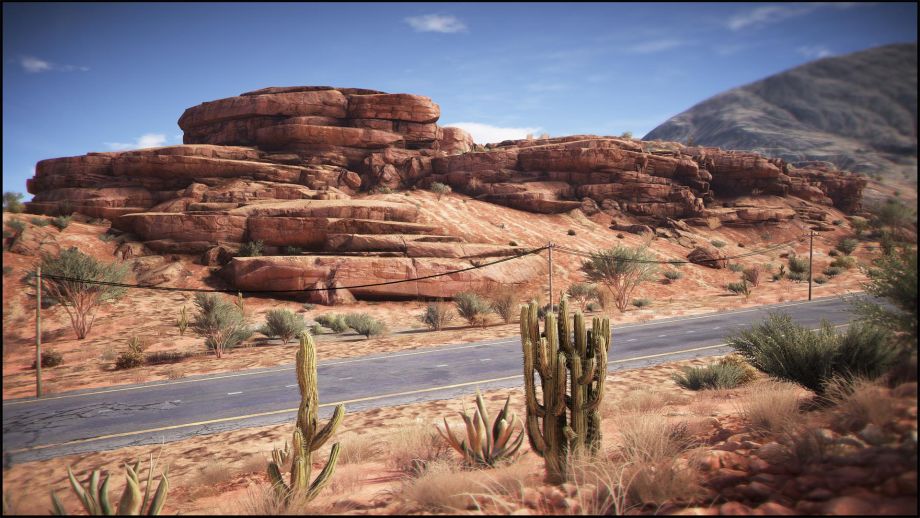 What is your background?

I started about 10 years ago after I finished my studies in applied arts at LISAA in Paris. I initially wanted to work in the film industry, but I realised that the area of Video Games offered more opportunities. I made a start with video games as a 2D concept intern. I rapidly went on to 3D because that was what I initially wanted to do. As I showed what I was able to do, I got spotted by Neko Entertainment where I worked on PS2, DS and Wii games. I then went on at Quantic Dream, where I stayed for about 6 years as Environment Artist. There, I worked on games like Heavy Rain, Project Kara and Beyond: Two Souls. During these years I perfected my skills, as the team was for a big part made out of professionals who came from the film industry. They had deep knowledge of imagery and paid close attention to details. 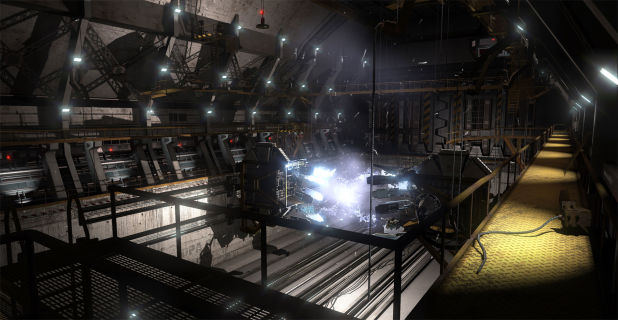 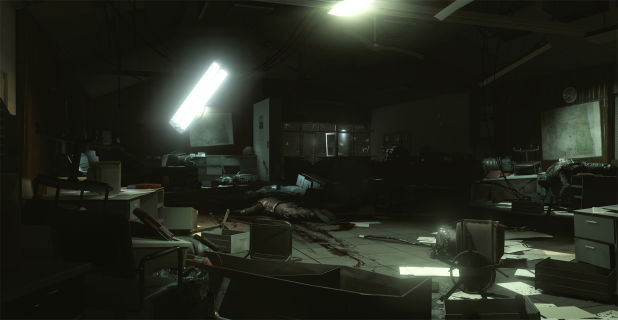 So it actually made sense with your initial idea to work in cinema?

Yes, it somehow overlapped with my initial goal, and this mix of both worlds suited me well. It was a good compromise and it allowed me to make great progress. Beyond: Two Souls was made like a movie. It was filmed in motion capture with real actors (Ellen Page and Willem Dafoe), and we had the ability to graphically push things very far with a team that knew their job extremely well.

I was then contacted by Guerrilla Games, a studio based in Amsterdam in the Netherlands, and who notably made the entire Killzone series. I worked there for a year as Senior Environment Artist on their next release, Horizon: Zero Dawn. I was in charge of the design of Building blocks as well as the construction of buildings, but also of the cities made from these elements. I also worked with the team on a visual benchmark of the cities so as to determine the overall visual quality. 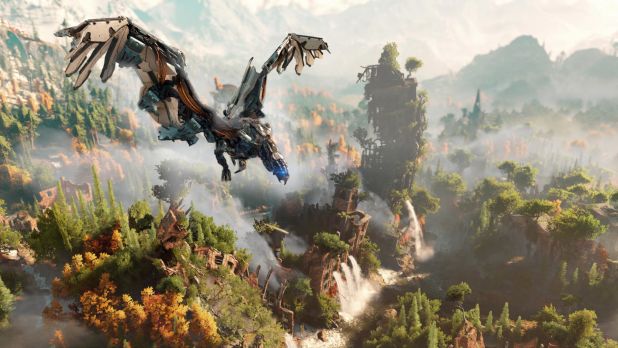 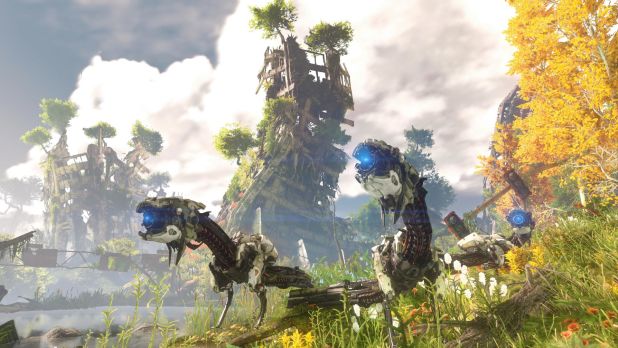 When I came back to France last April, I had in the meanwhile been contacted by Ubisoft Paris, who were searching for a Senior Environment Artist to work on their new launch, Ghost Recon: Wildlands. I’ve been working there for nine months now and things go very well. In addition to my work as an Environment Artist I also play a role of Coordinator, and I’m sometimes led to supervise other artists to ensure graphic consistency on portions of the game. The goal is to ensure that the Art Director’s vision is followed. At Ubisoft, I have the opportunity to give my point of view, to propose things, and I’m fortunate to have the freedom to take initiatives. 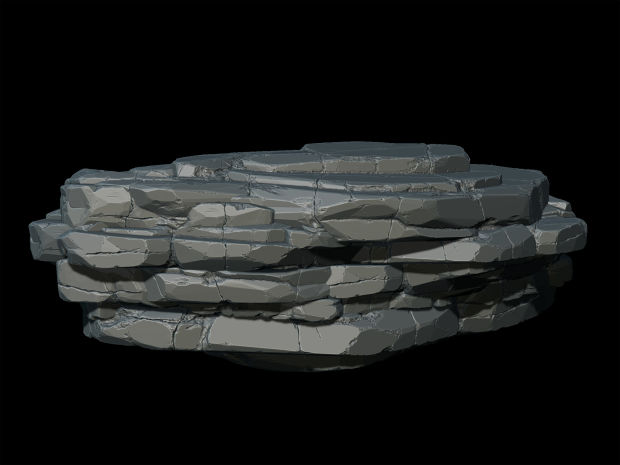 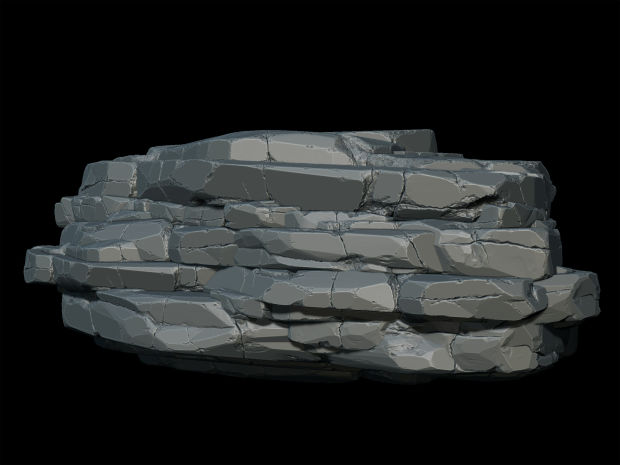 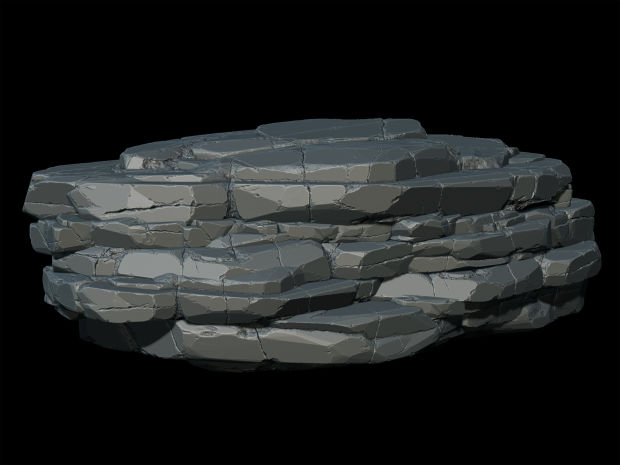 What have been your sources of inspiration?

I come from a school of applied arts, and I’ve always been very sensitive to the universe of Japanimation. All series that are a little sci-fi, such as Akira and the creations of Katsuhiro Otomo, fascinate me. Anything that has a “mech” kind of touch, like Evangelion, also inspires me. Japan offers always more crazy things and I love the universes that they manage to create. I also like European artists, such as H.R. Giger and his work on Alien.

Did these inspirations influence you in your work?

They’re rather areas of interest than inspiration for my work. In the video game world, you’re led to work with an art direction; this constrains us to adapt. For example, Heavy Rain remained a quite realistic game; There are no robots or things like that. It’s rather in my free time that I have fun trying things that I can’t do on a daily basis working on these games.

Could you tell us a bit more about your projects in your spare time?

Yes, I recently worked on a sci-fi helmet project. I love working on hard surfaces and I saw many impressive hardsurface works made with ZBrush, especially the works of Michael Pavlovich, Vitaly Bulgarov and Mike Andrew Nash. That is why I started working on this helmet project with the aim of learning everything I was able to learn and push quality as far as I could.

So it was more of a personal challenge in the end?

Yes, you could say that. When I was working at Guerrilla Games, they were very focused on sci-fi, robots, mechs, etc. and Horizon: Zero Dawn of course is a game that takes place in a post-apocalyptic world inhabited by mechanical creatures. So basically every day I saw incredible works of mechs, which triggered a real desire in me to improve myself in that domain, as my position as Environment Artist didn’t allow me to do so.

So I agreed that in my free time I would work on this project with the idea of improving my skills and making a nice project. I found myself studying every night, watching tutorials, doing exercises and trying to understand the mechanics of ZBrush for hardsurface. In fact, it’s very difficult because there are plenty of small hidden options in ZBrush; an artist who makes characters and an artist who makes hardsurface can have a completely different use and approach of ZBrush. So I had to relearn how to use it for hardsurface because my knowledge was essentially focused on organic work, like sculpting trees for example. I therefore started from scratch and once I felt ready, I started sketching directly in 3D with ZBrush to find interesting shapes. After various iterations, I ended up with a model that seemed interesting.

The goal of this project was to offer a CG image, push quality to the top and have the most beautiful rendering possible without the constraints of a video game project. Finally, it led me to make an article for 3D Artist. I had the chance to make their cover and write an article based on the technique, as well as a tutorial that explains how I created this helmet, step by step, from the design to the final image.

This was the first part of my project. I then contacted Allegorithmic with the idea of transforming this CG image into a real time asset. I had a strong desire to improve myself in the use of your software as they represent the future of real-time texturing for me. I had been paying close attention to Allegorithmic’s products for a long time as to me they are a revolution in the field. At Quantic Dreams, audits were made on the first versions of Substance Designer and I always had an eye on it as I found the nodal system very interesting. Precisely at Quantic, I worked for almost 6 years with the nodal system as we were using Hypershade in Maya. So even before starting with Substance Painter, I thought Substance Designer would be a good starting point as I already was familiar with the nodal system. The helmet seemed the perfect asset to start improving my skills in Substance Designer and see how far I was able to go in real-time imagery. 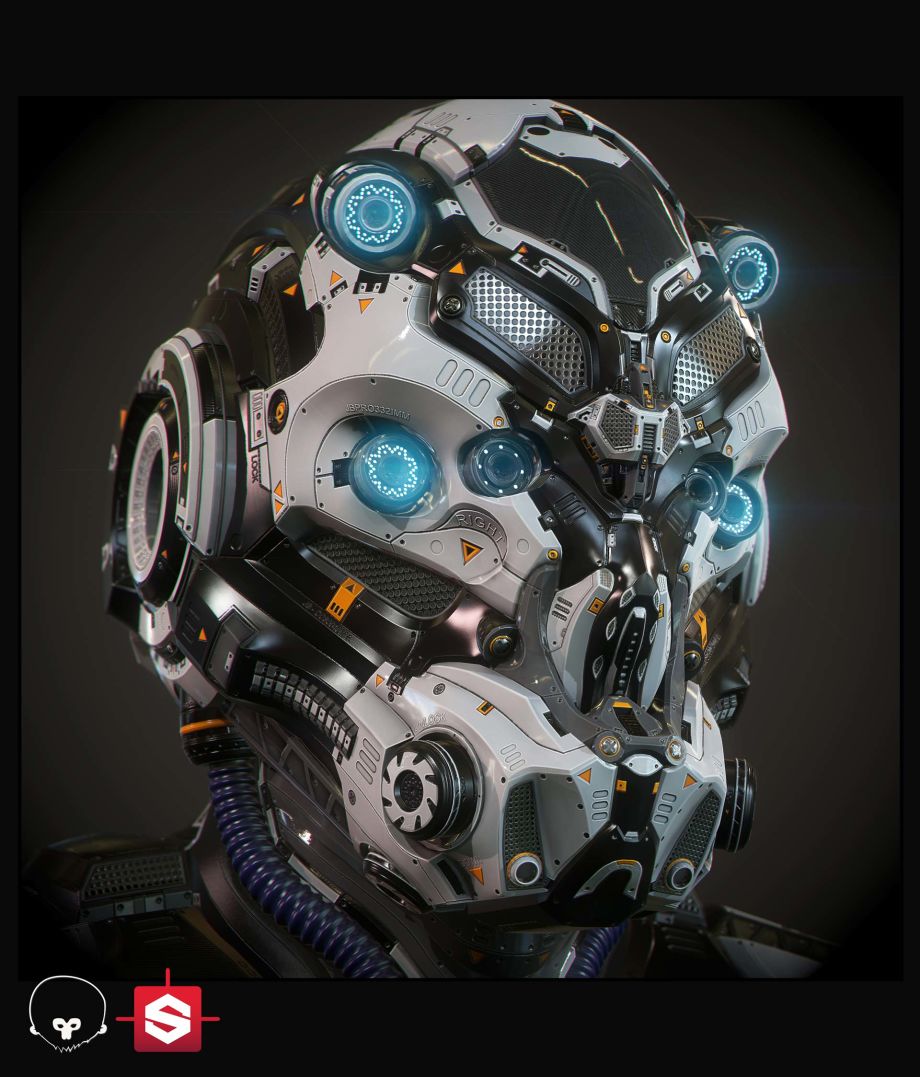 Can you tell us more about your workflow with Substance Designer on this project?

My process was quite simple. Once I had finished my model, I proceeded with baking in Substance Designer. For the model, I had two 4k UV sets. I worked a lot using color masks. So the convert UV to SVG baker allowed me to generate exactly the masks I needed. I assigned different colors to all my pieces to be able to pre-visualize where I was going to apply my materials later on. So initially I set up everything by working on the masks and colors. The aim was to have my normal map with my elements separated by colors. I was then able to work separately on the materials, which I finally integrated by replacing my uniform colors and my blends with my materials and multimaterial blends.

I actually just finished a new article for 3D Artist, in which I explain my workflow on this part of the project. Half of this article will explain in detail my use of Substance Designer.

I finished this project a few months ago and it allowed me to greatly improve my skills in Substance Designer while trying to have a nice rendering with a cool asset. With Substance Designer I was able to make three versions of the helmet. Once I completed the white version and it was true to the initial CG model, I wanted to make adaptations. So I did a black version with Red LEDs, and a military version. With this last version, I wanted to push it a step further with Substance. I decided to add damage, rust, dust, etc. I wanted this helmet to have a story; It might have been a guy wearing an armour who just came back from combat, or a guy who has been dropped on a planet and is all by himself so his armour is being damaged over time. I had fun telling a lot of small stories around this asset. I added the logo and name of Tetra Vaal, the factory that manufactures the robots in the sci-fi movie Chappie. Its Director, Neill Blomkamp, also directed the movie District 9. The logo is that of the factory and the police officer robots. It is therefore a reference to Tetra Vaal, as if this helmet could be a variation that they made. 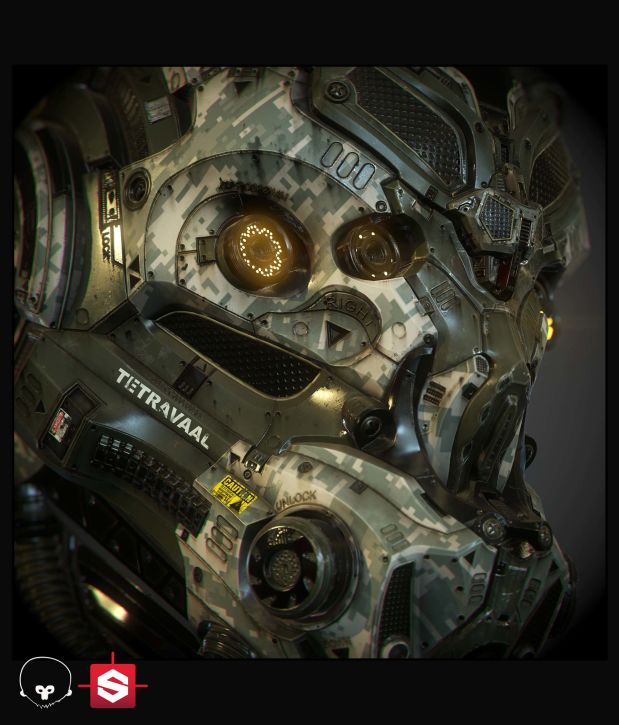 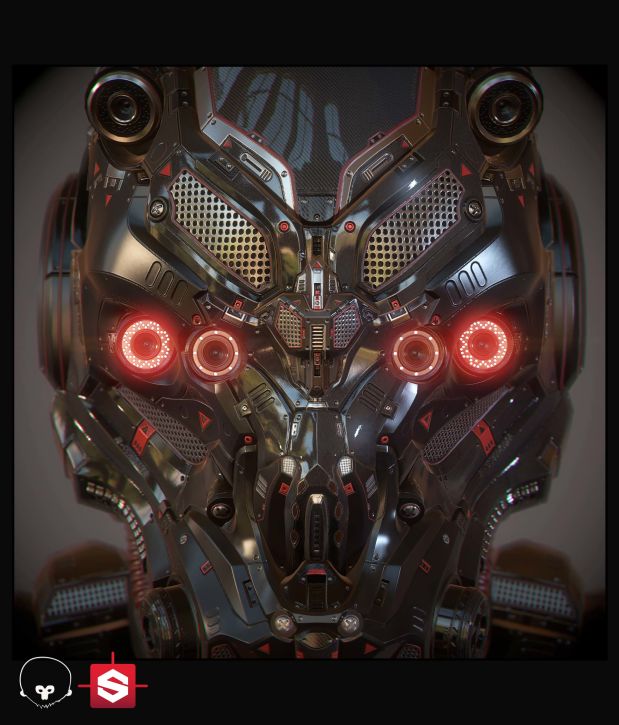 How did your use of Substance change your approach to texturing?

It may sound very simple, but the features that allow you to extract color masks, convert them to masks and reblend it all are extremely useful and enable you to do many things. For me, the ability to control masks in Substance is key. These color masks have changed everything in my approach to texturing and how I separate my elements. Likewise, the generators that allow you to make the rocks from squares, for example, are incredible. Sometimes I study some shaders and I’m astonished at how someone managed to create a pattern of rocks from a simple square.

I was able to learn a great amount of things on this helmet project, but I still have to improve myself. I often see people who offer new approaches, visions, and uses of Designer and it’s really exciting and motivating for the future.

What was your biggest challenge and how did you face it?

My biggest challenge was to create something as “physically based” as possible. At Quantic Dream I worked rather old gen, so not yet using PBR. At Guerrilla Games, they already used PBR engines but my work was more focused on pre-production and the construction of the game, so I couldn’t yet experience PBR more than that. It has only been since I’m at Ubisoft that I’m really familiarizing myself with it. Because I started this helmet project when I was still at Guerilla Games, it was a big challenge to assimilate all these new procedures. I had to pay attention to every detail in order to have something physically correct and as realistic as possible. I still make some mistakes, so for me it’s a continuous learning process.