Alex Kish talked about the project Neo Oblivion, a recreation of the Ayleid ruins from The Elder Scrolls IV: Oblivion made during one of the bootcamps at Vertex School.

Hi, my name is Alex Kish and I’m an environment artist. I’ve been interested in 3D art for a long time. I previously was in industrial design and was fascinated by cinematic projects like Alex Romans Third and Seventh. Eventually, I wound up using Unreal Engine through my work and went down the rabbit hole of creating environments.

Enrolling in the Bootcamp

Up until joining the bootcamp, I was learning through YouTube videos and various tutorials. Those are great resources and have helped me learn a great deal. But still working through problems and finding the exact resource you need takes time and slows things down. I joined the bootcamp as a way of speeding up the process. My hope was to work through each step of creating an environment and get tips and feedback from professionals all the way through. 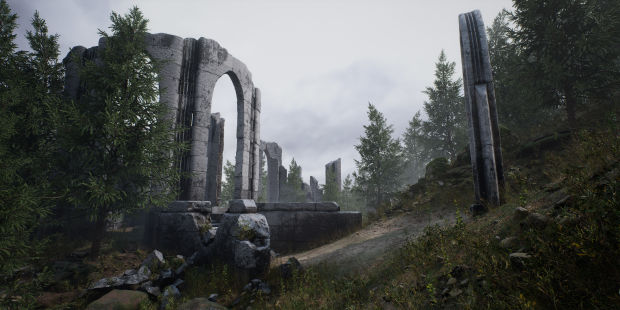 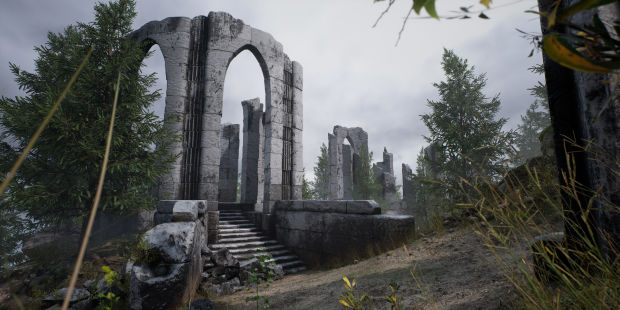 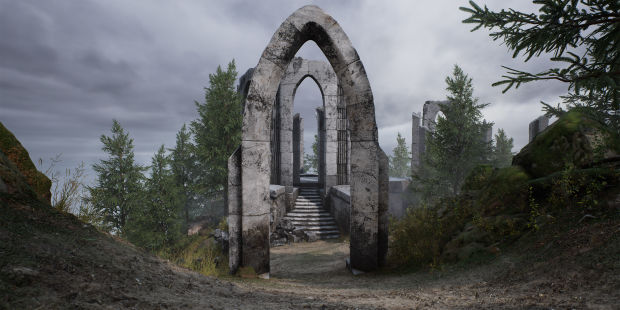 Neo Oblivion: About the Project

For this project, I wanted to recreate an existing game environment and I wanted it to be a game that was somewhat older and could be brought up to newer graphics. I wanted to pick a game that was important to me and I’ve been a big fan of the Elder Scrolls starting with Oblivion. It was the first Elder Scrolls game that I played and I put a lot of hours into it and it was the first game where I just spent time exploring the environment. 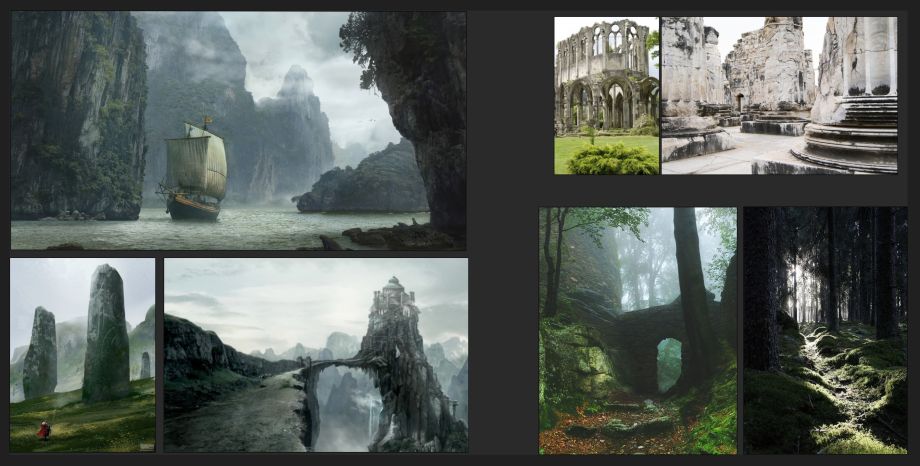 One goal was to closely replicate the layout in Oblivion. I was inspired by Wiktor Ohman’s Counter-Strike scene where he used in game images to photoscan the environment and use that as a blueprint for placement of the elements in the scene.

I used Reality Capture and a large number of high-resolution screenshots to scan the scene. Reality Capture makes this process quite straightforward but, I did run into a strange problem. The center of each tower was so similar that it confused the reconstruction and I got some Esher-like results with staircases coming from strange places. I fixed that by just removing some images from the center of one of the towers. 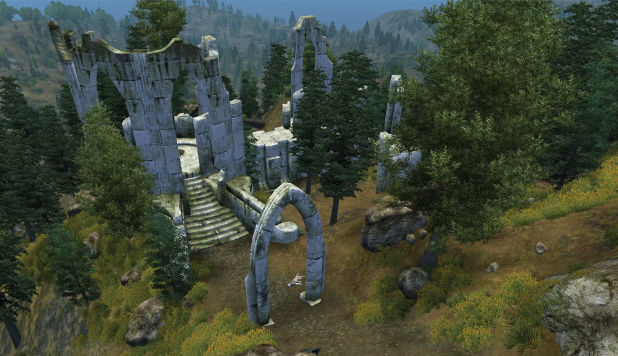 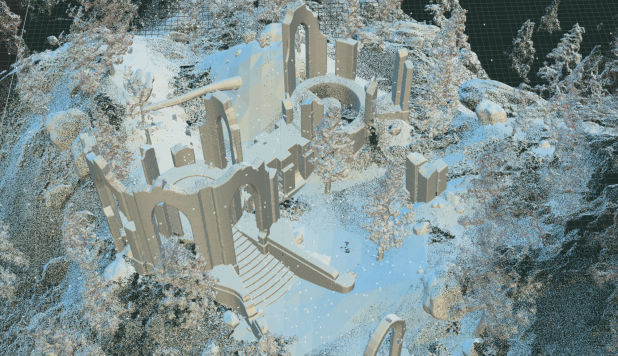 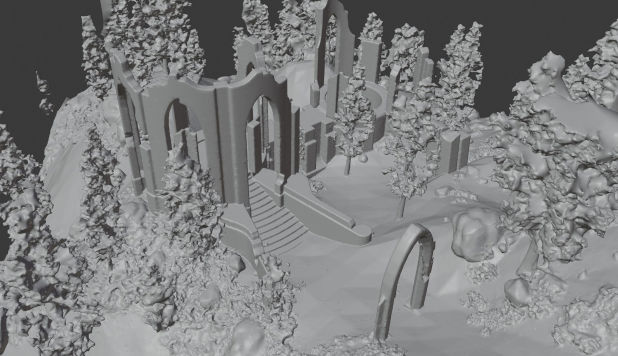 Once I had the 3D scan I used it as a guide mesh that I built on in Blender. For the base meshes, I only needed simple shapes with smooth surfaces. I also created cutter geometry to control where the blocks separated. From there I went into Houdini to create the edge wear. The wear was created using VDB nodes to smooth the corners with noise to break up the shapes. I did the effect in two levels, first overall for the main corners, and a second time after splitting the ruin into blocks. I also added some position randomness so that the blocks were not perfectly stacked. 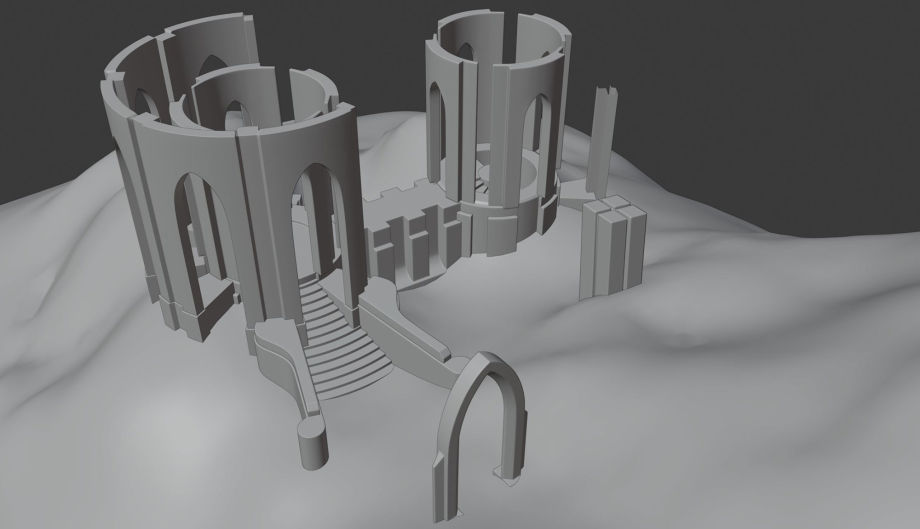 Houdini was used for both high and low poly. After generating the high poly of the ruins, I fed the geometry into poly reduce and auto UV nodes. Being able to auto-generate assets in this way speeds up the production. Most of the scene has traditional optimizations, like LODs for the foliage and a distance fade on the ground tessellation. 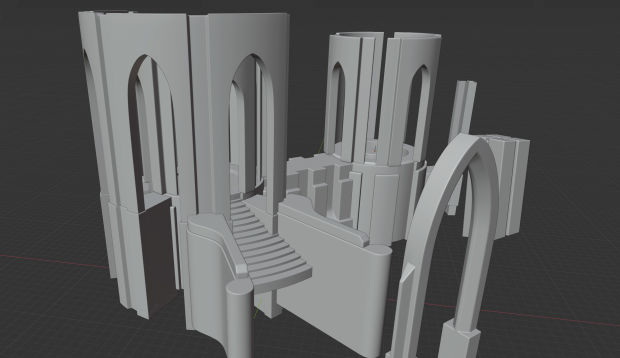 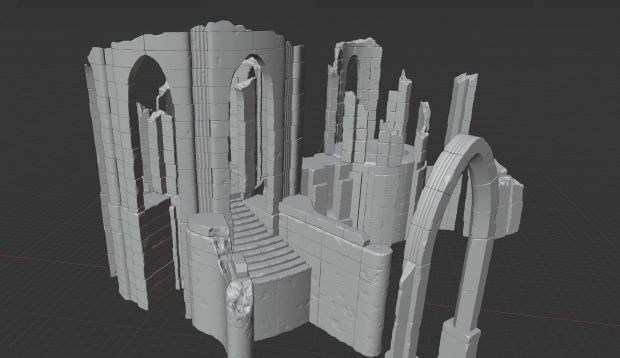 For the majority of the foliage I used Megascans objects, however, the trees were built inside of SpeedTree. The process was pretty standard, I started with Megascans textures and then used the leaf cards to build off of branch geometry. For the ground foliage, I used reference of forest paths to pick similar plants and replicate their layout. The wind for the trees was set up inside of SpeedTree and brought into UE4.

For the lighting, I wanted something that matched the ominous feel of the ruins, with the clouds and fog playing a significant role in the mood of the scene. The lighting setup is incredibly simple. I'm just using a directional light and a skylight, both are set to stationary. The skylight has a value of 1 with an unaltered hdri plugged in and the sun is set to 3. To get the right feel for the clouds I edited the power and multiplier in the sky sphere shader to make the darker clouds stand out more. Fog cards are placed behind foreground objects to get control over the contrast between foreground and background elements. Ambient occlusion played a large role in the scene for the trees and foliage. I’m using a blend of both screen space and material based AO to get the shading on the trees.

I learned a number of things during this project. It was my first time using reality capture and Houdini. Since completing this project I’ve found several occasions to use both photogrammetry and procedural Houdini workflows in other projects. I had great help from my mentors and classmates during the bootcamp. We spent time going through scenes and discussing the issues that we had and getting a specific focus on the areas we were struggling with. I want to thank my mentors Ryan Kingslien and John Waynick. It was great having everyone work together and contribute their skills to helping everyone improve.

Looking Back at Older Games

The great thing about a game like Oblivion is the gameplay itself. At the same time, when going back and playing some of the old games we love it can take a while to get used to the older graphics. New game engines and hardware are opening the door for incredibly immersive experiences. I’m not sure what the next Elder Scrolls game will look like, but I look forward to it! I’m just happy to have the tools and hardware to make environments of my own.