Gustavo Medeiros briefly talked about the production of his stylized character Pouch Hunter made in ZBrush, Maya, Substance Painter, and Marmoset Toolbag.

My name is Gustavo Medeiros, I'm a 3D Character Artist. I studied at a school here in Brazil called Melies and I took many online classes and workshops with Rafa Souza, Glauco Longhi, and Henrique Rainha. I've studied a lot on my own, using works of artists that greatly inspire (Glauco Longhi, Gio Nakpil, Raf Grassetti, Bruno Camara, Rafa Souza, Sam Poirier).

I didn't contribute to any big project yet, but I participated in the production of Diablo Immortal a bit. Previously, I worked for advertising here in Brazil for a long time, but now I work in the game industry. I worked for Wildlife Studios (Brazil), Roart Digital and now I am working for a studio called Monomyto – we are doing a great mobile game called Gunstars that's going to launch at the beginning of the next year.

Since I was a kid, I always drew everything, made characters, and recreated things that I saw on the screen, in games, movies... At first, I didn't know that I could turn this passion into my profession. When I did some research, I found a lot of information about concept art and thought "that's it, I wanna be a concept artist."  I took a lot of drawing classes and was looking forward to improving my drawing skills and then my mentor suggested that I take a sculpture workshop to improve my artistic view. So I took one with Glauco Longhi, and damn, I discovered what I was going to do for the rest of my life – be a sculptor. After that, I discovered 3D, and for me, it became a mix of traditional art and technology, which is another thing I always loved! 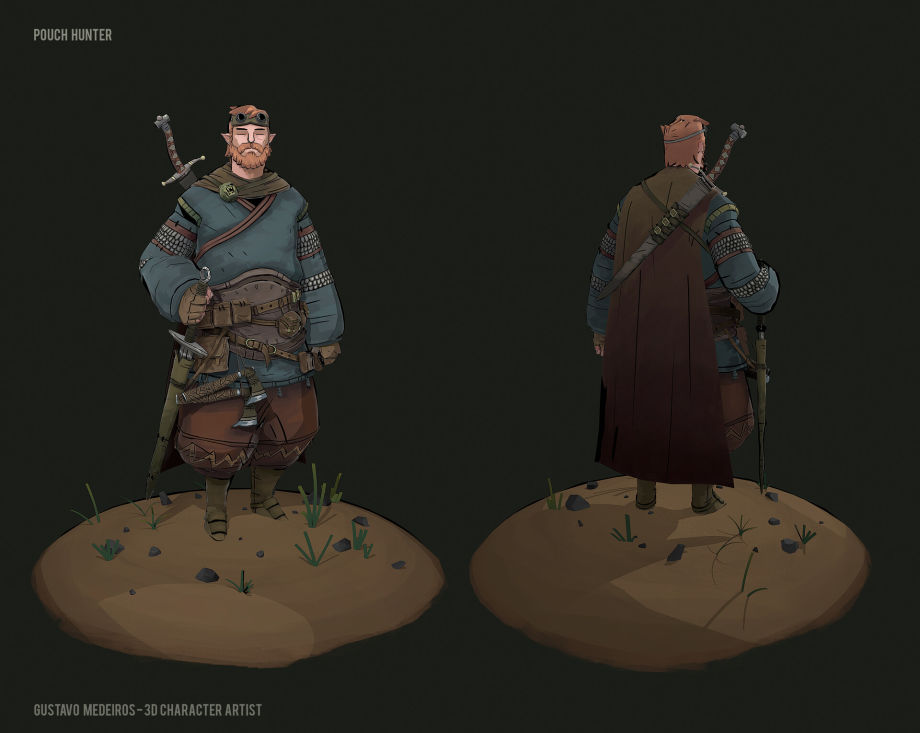 I was studying anatomy and looking for something stylized to make while I did my studies. I found Conner Fawcett's work some time ago and created a folder with almost all of his works. It was too hard to pick one of them, he is an amazing artist. Finally, I chose the Pouch Hunter – I love his style that reminds me of Mike Mignola's work and I knew it would be a challenge for me to translate his concept into 3D. 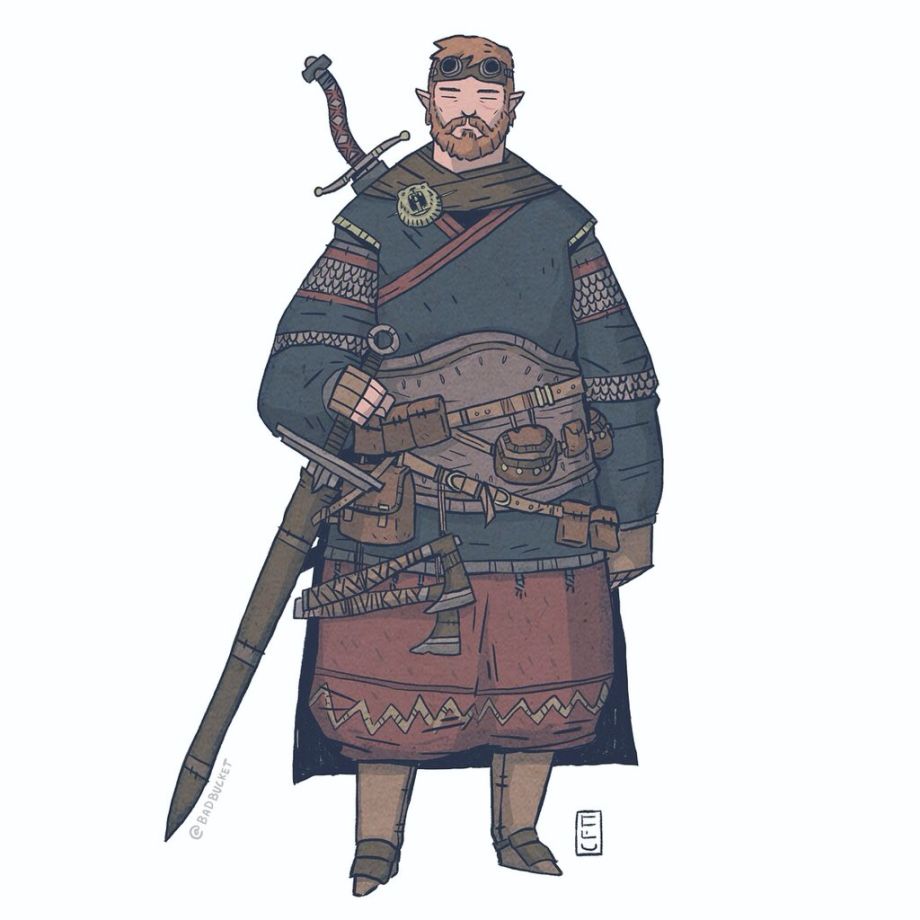 The first step for me was research. I take time to find references for the style I want to reach, stylization, real-life references for some parts. If you need, you can add more references during the whole process! Here are some of the references that I used for this project: 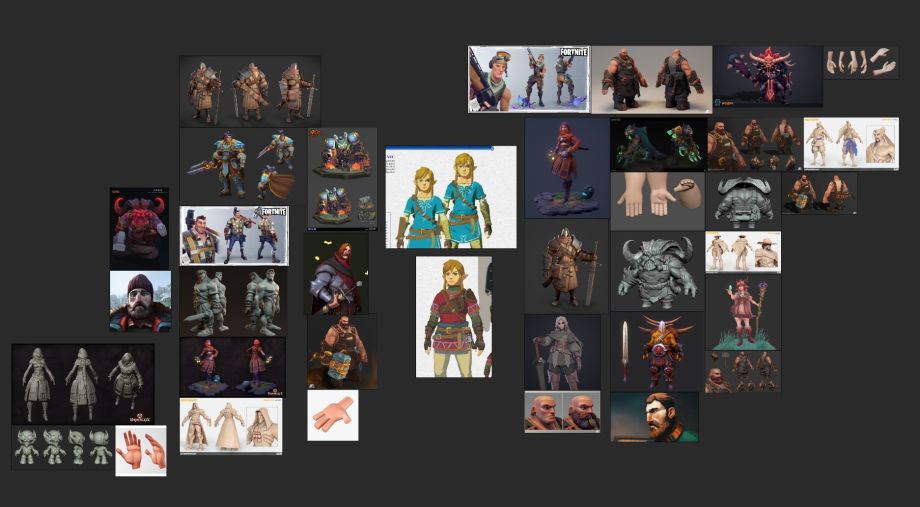 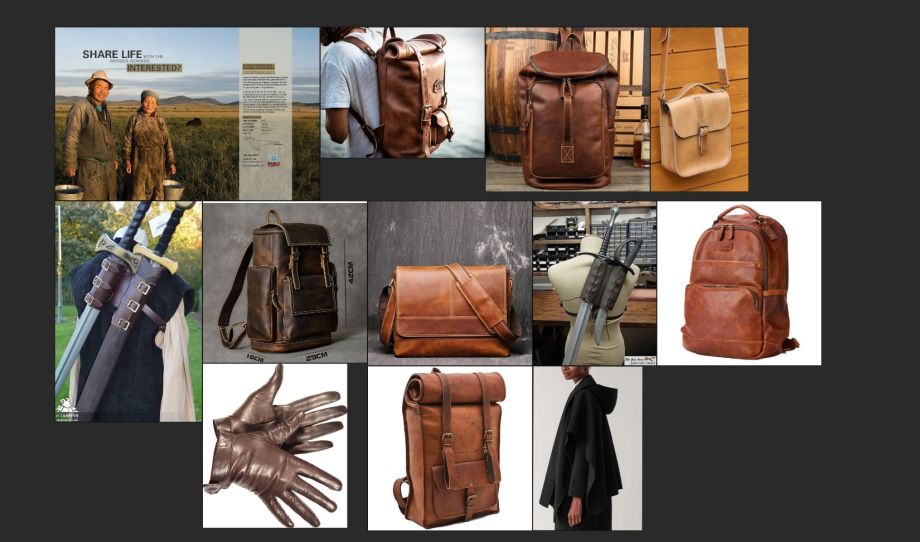 I always use PureRef to organize all my references.

At first, I started blocking everything, trying to find good proportions and a silhouette. Making some comparisons in Photoshop can help you a lot in this step! 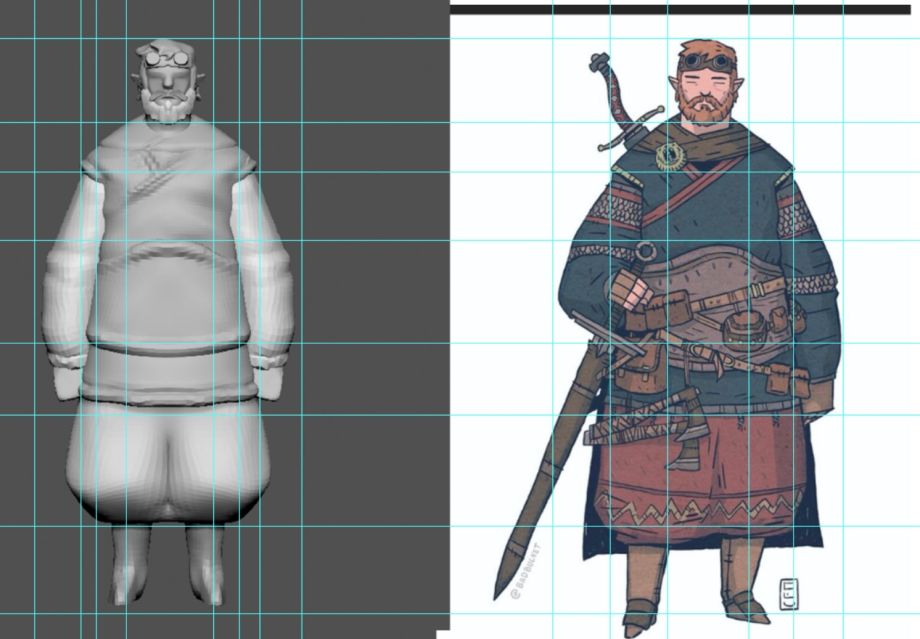 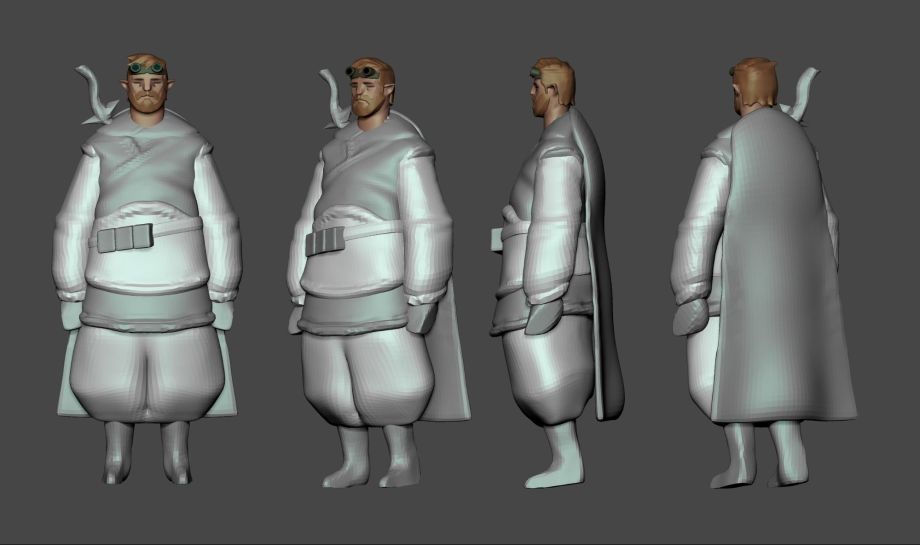 I usually block the organic parts in ZBrush and some assets in Maya. 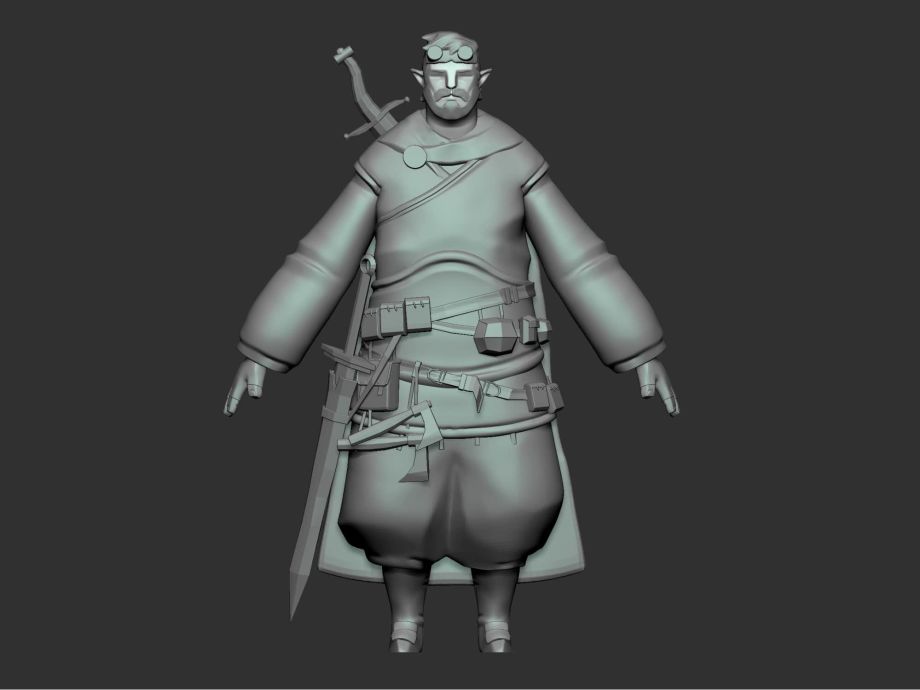 After that, I start refining everything. If I have any issues, I usually do some paintover in Photoshop to solve the design problems, doubts, or simply for self-feedback! 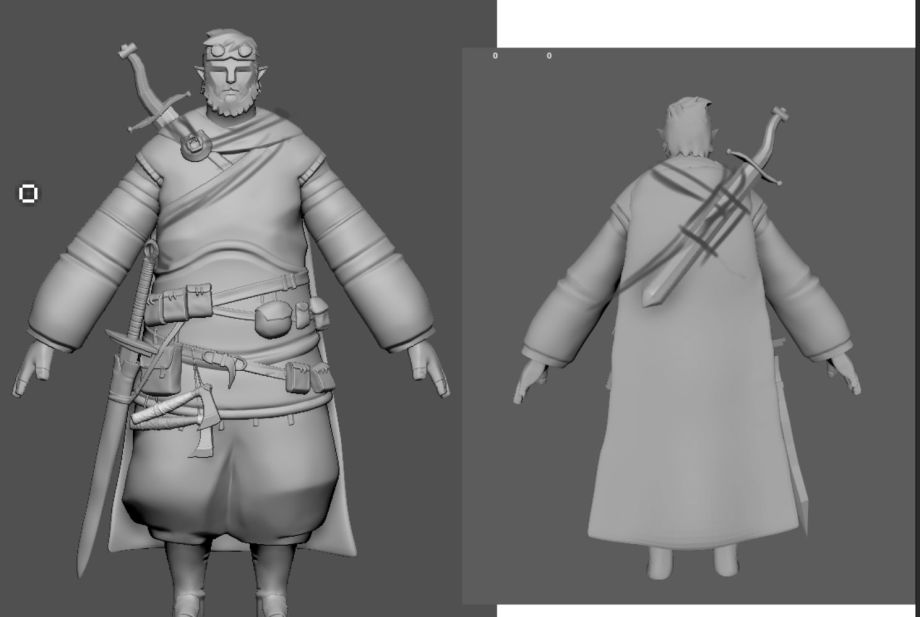 For the outfit, I used the same approach – started with a rough blockout finding a silhouette, and then refined the asset. For the pockets, I made one of them, then duplicated and created some variations to avoid making everything look the same.

Here is the progress, from blockout to high poly: 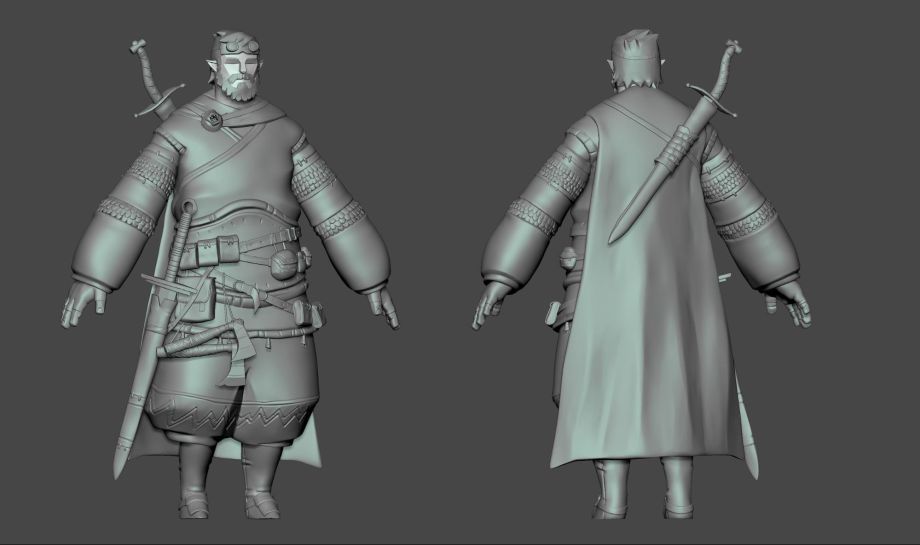 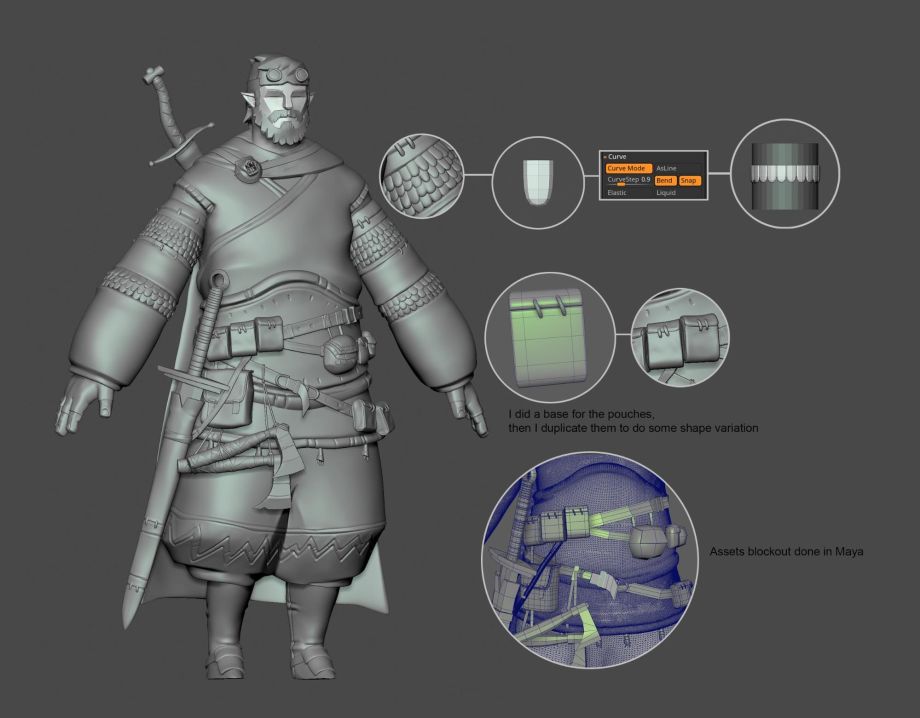 In this part of the process, I wanted to do achieve optimized and clean topology. In total, I had 26.4k tris. There is no secret here, I just duplicated the topology of the pouches and things that were almost the same and added one or more edges. Coming back to the pouches, as you can see, they are almost the same! 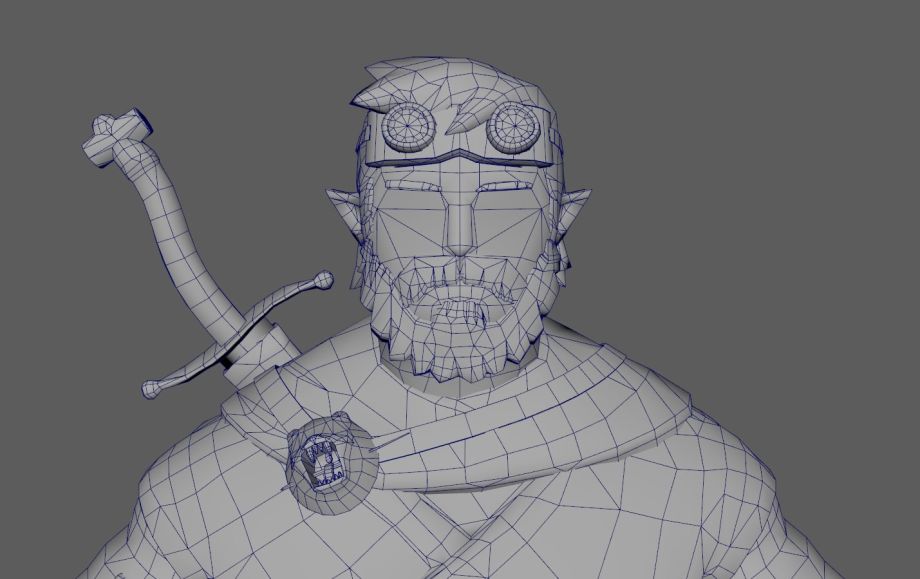 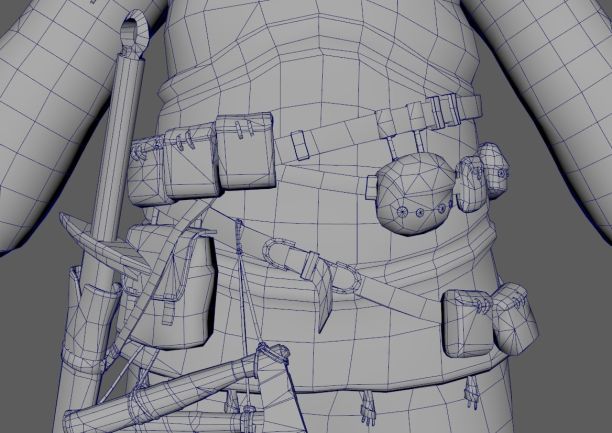 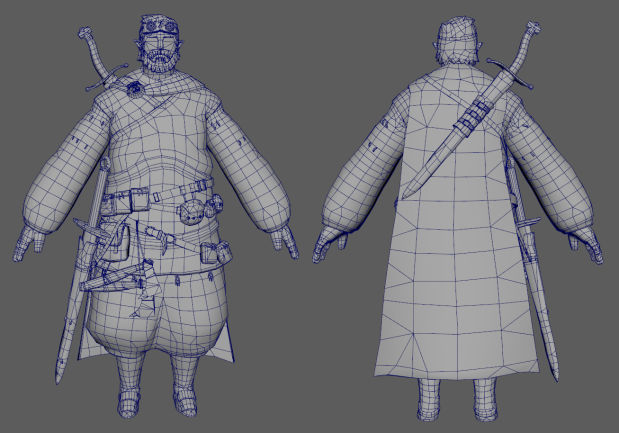 If you need specific examples, you can search for more information on topology, Polycount Wiki page is a good source. And if you want to examine the model closer, you can find it on Sketchfab.

I optimized UVs and created 2 maps just like for a mobile game. I used Maya for almost all the process and UVLayout for some UV organization. I didn't mirror UVs in this project because I wanted to give each part different details. 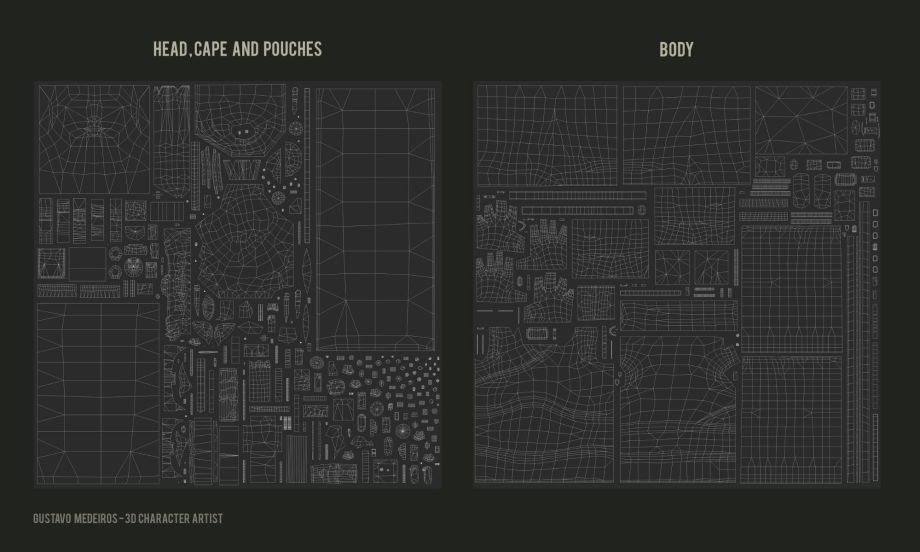 I tried to maintain the same texel density for everything: 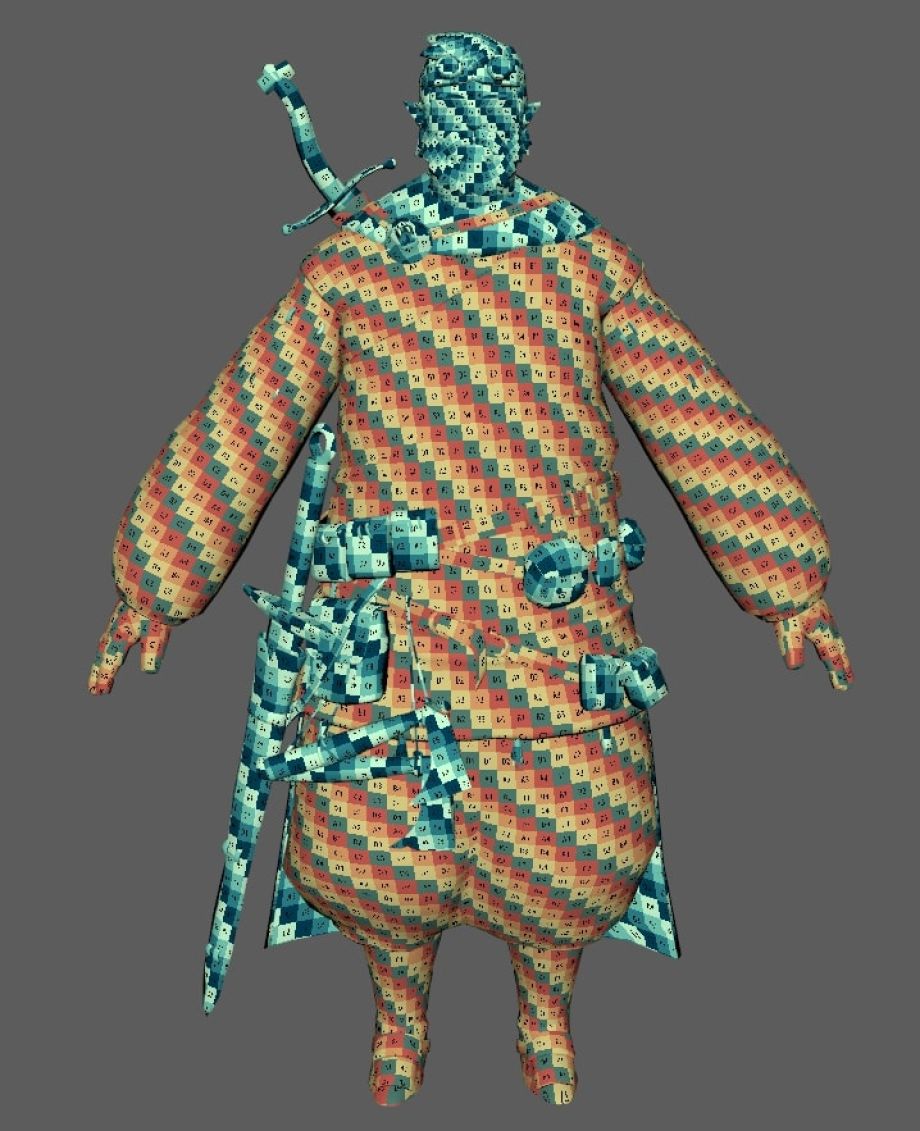 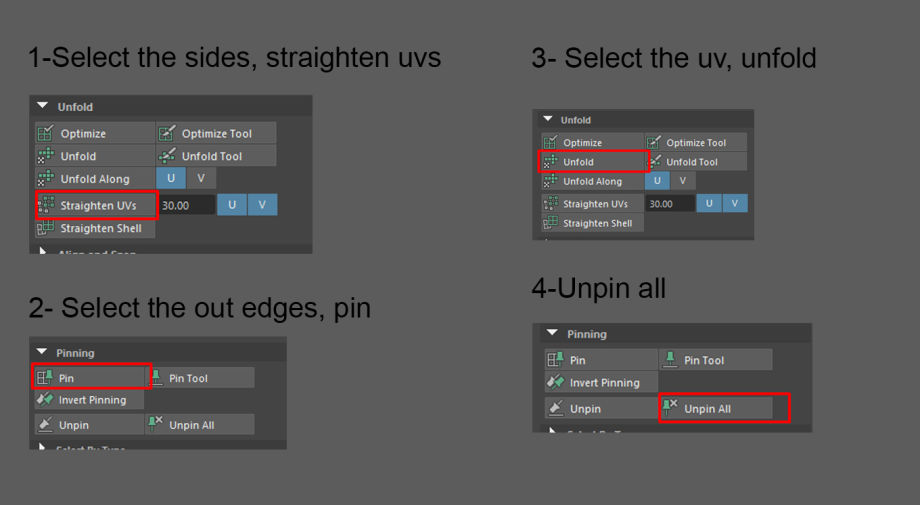 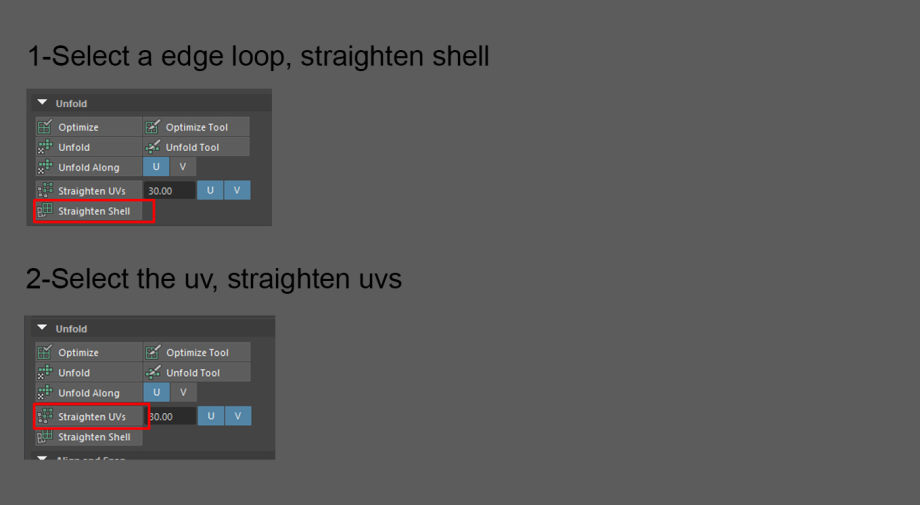 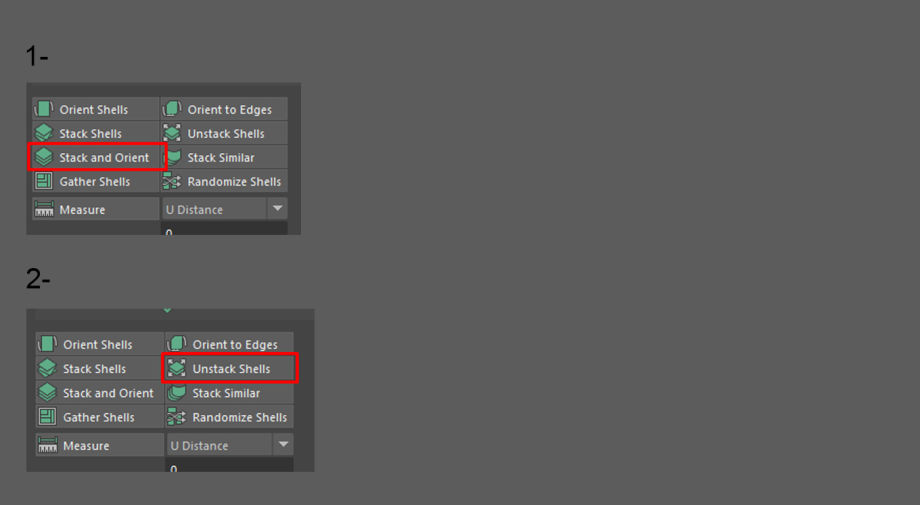 I used Marmoset for this part of the process, but before baking, we need to prepare the model: 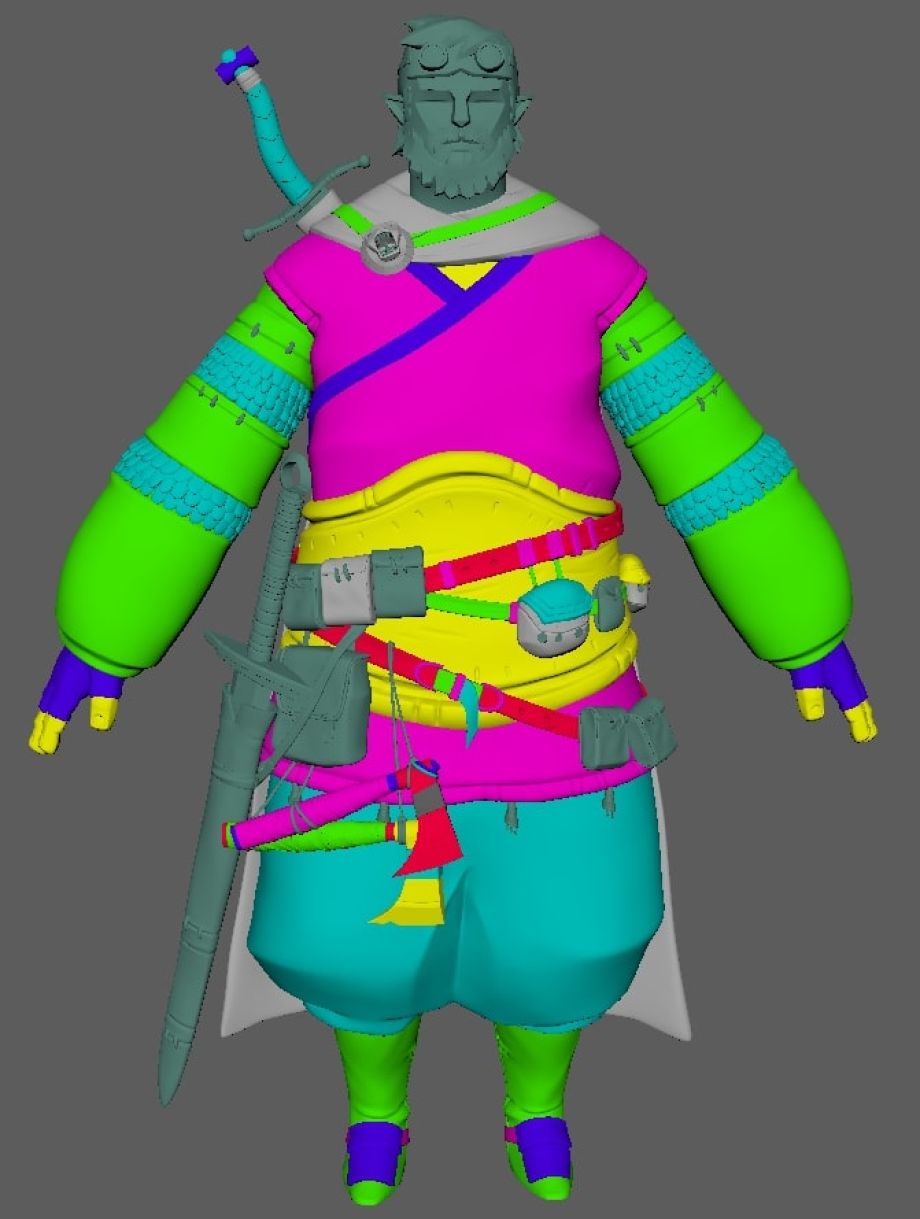 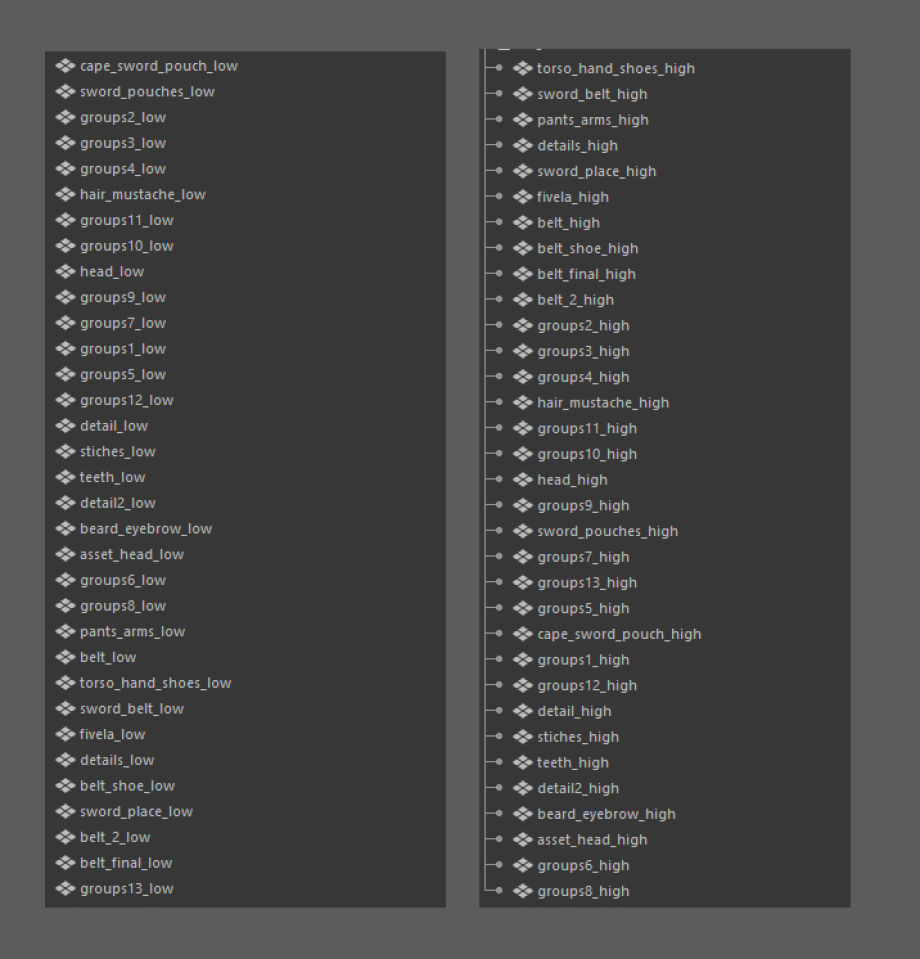 Here are some maps that I generated in Marmoset Toolbag. If you want to know more about baking in Toolbag, there is a lot of good information on their website. 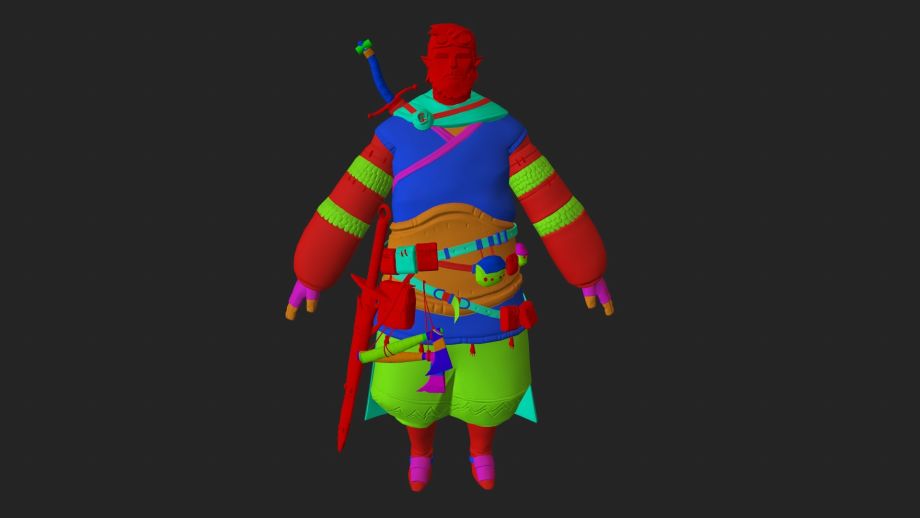 Make sure that your final bake is clean without any artifacts. I love the baking process in Toolbag because I can see everything in the viewport, paint the skew to adjust normals, adjust the cage in real-time, and see quick results. 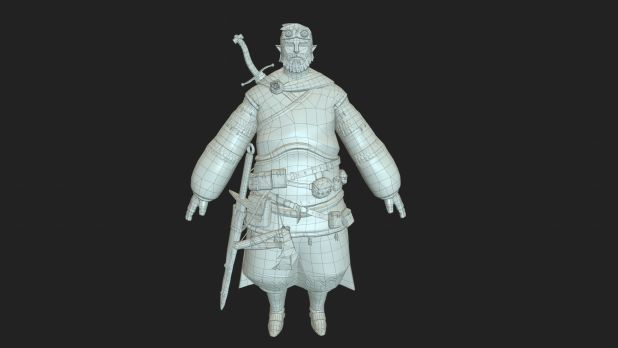 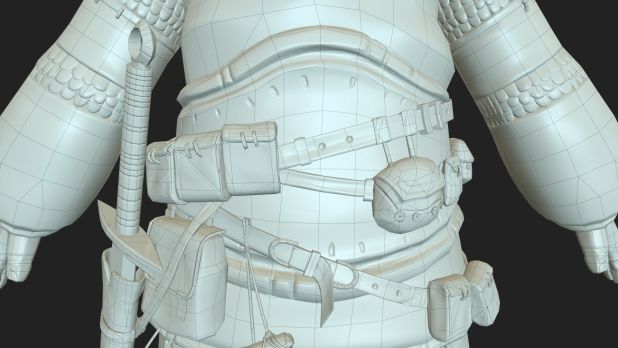 I did almost everything in Substance Painter and some parts like the cape in 3D Coat because I wanted to create a specific gradient with some brushes, and I thought I could do it more easily in 3D Coat. I didn't use the colors from the concept art and made my own interpretation instead. I did a lot of tests until I reached a good result! Here're some images of the process: 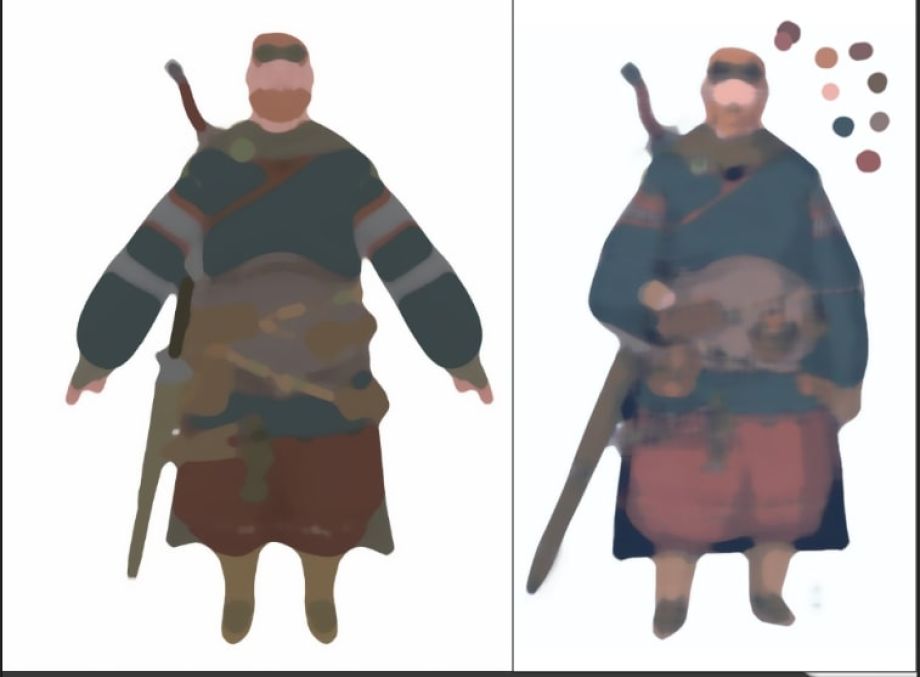 I started with some kind of color blockout, giving a pure color to every asset to find a cool palette for the project. Then, I move on to refining the palette and details. At the beginning of the project, I was going for PBR, with roughness and metallic maps, but when I began testing everything in Toolbag, unfortunately, it wasn't working. I did more research to find some stylized games I like and decided to use a kind of cel-shading effect. I found a custom shader for Toolbag. It already had an outline but it wasn't enough for me, so I started to paint the lines in the texture. I think it worked well for the project!

I'm not a rigging/animation guy, I really don't like this part of the process, but I wanted to give the character some atmosphere, make him look like a playable character from a stylized game. I used auto rigging (advanced skeleton) and created a simple Idle animation, always paying attention to the silhouette of the pose. 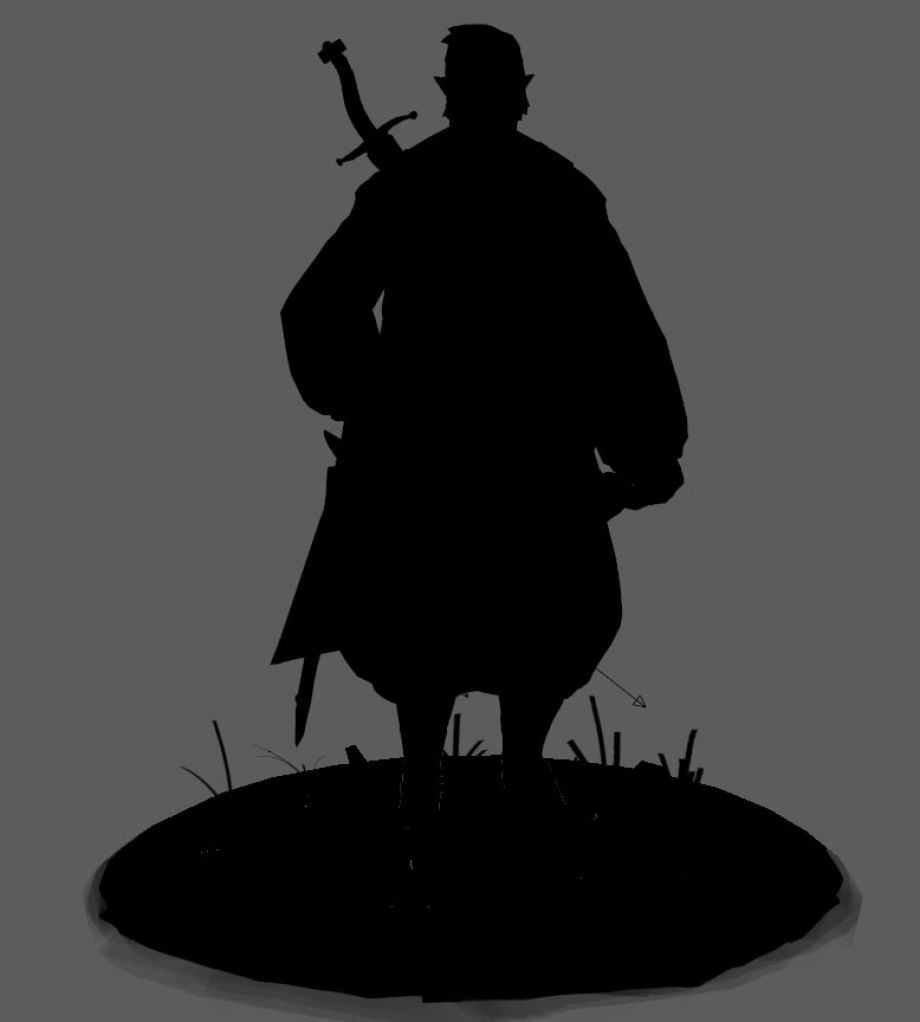 For the wind effect, I placed some joints and controllers and animated them, no secrets, quite simple:

I used Marmoset Toolbag. With the custom shader mentioned above, I used just one source of light to make everything visible and create cool shadows. 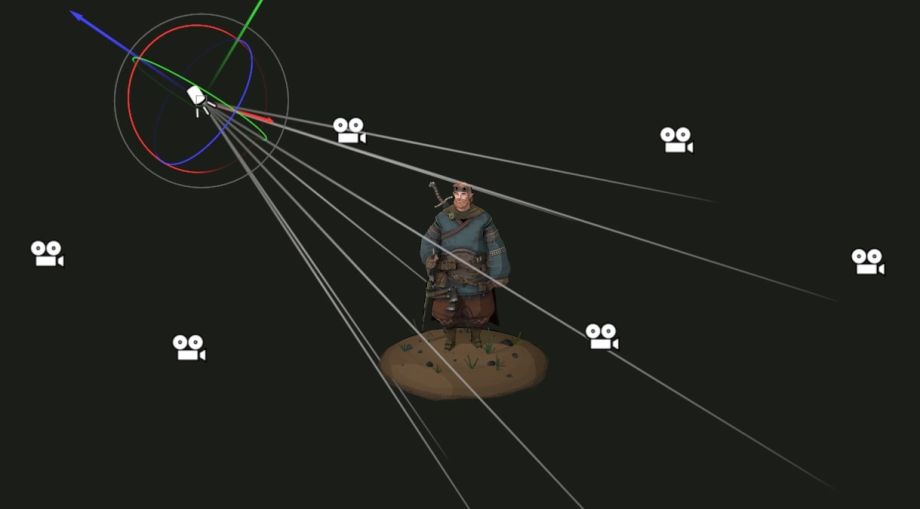 I created a camera for each shot – this way if I need to change something I can generate the same image with the fixes!

In this project, there is no post-production. When presenting stylized characters, the trick is to pay attention to the silhouette, pose, colors, and some details like the wind I did. These are simple things but worth the time.

The most challenging part of the project was texturing. I re-did it a hundred times. At the same time, for me, it was a discovering process, I explored what I wanted to reach with this project, what style I'd use, and so I tested a lot of things to find the ones that'd fit in the project. While working on the character, I learned a lot about the color palette, composition, stylized sculpting, and more.

Now, I'm looking for something new – I'm exploring more realistic stuff and taking a different direction with my job. I want to make some creatures and more realistic real-time characters. Below is a sneak peek at what I have been doing! 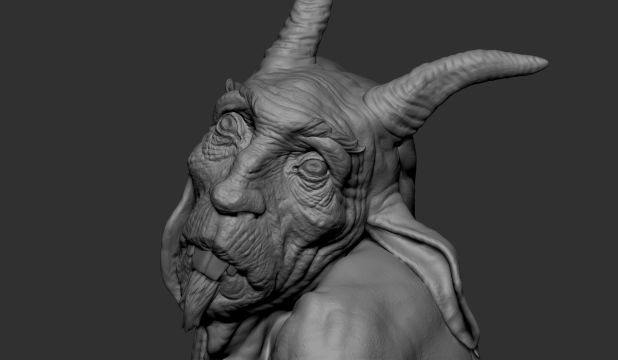 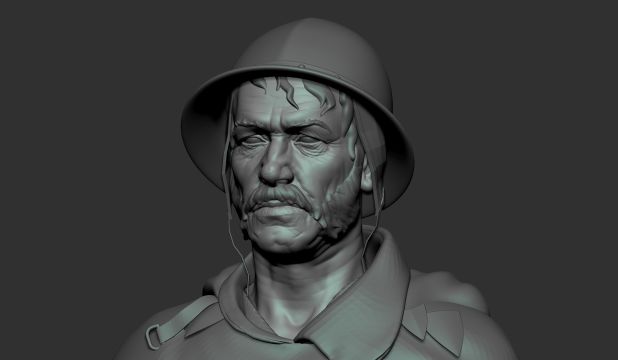 Thanks for reading this making-of, if you have any questions, let me know and I’ll be glad to help!