Dmitriy Bely did a breakdown of his Chainsaw prop inspired by Wolfenstein II: idea search and weapon design, modeling, texturing, presentation in Marmoset Toolbag, and more.

Hello, artists! My name is Dmitriy Bely. I'm 21 years old, and I'm from Russia. I was introduced to 3D graphics about 7 years ago. At school, I learned what 3D was, became interested in it, and studied it on my own. My path in 3D was almost immediately directed towards the game development industry, and I love it. Joining the outsourcing studio 5518 Studios a year ago was a significant step. Their team of experts and just good people helped me learn a lot of new things that I had not worked with before. Recently, I received a bachelor's degree at the National University of Science and Technology MISIS in Moscow. And now I'm preparing for the next stages of my life and career.

I like games and I enjoy working on some of them. I think it's funny that artists get tired of graphics in the process of working, but like many people take a break from work by playing the games they make. 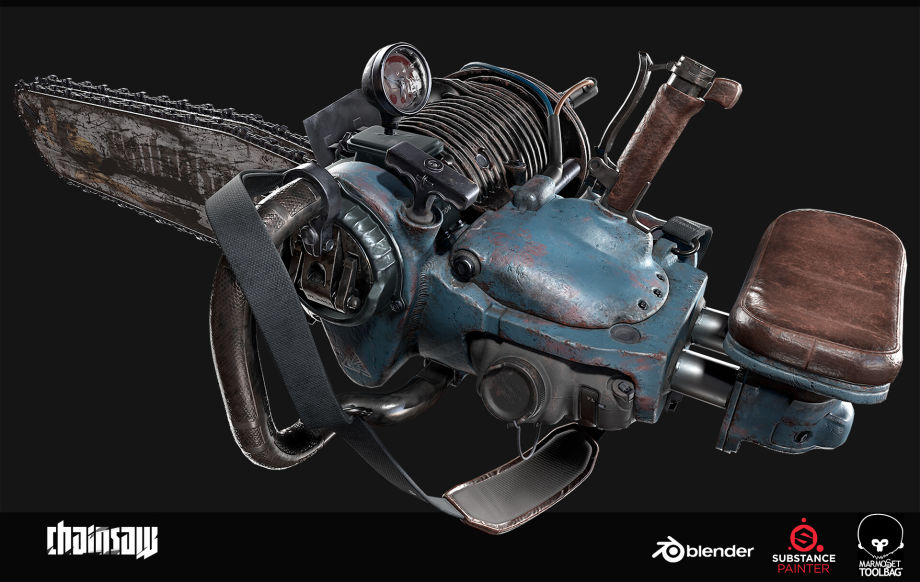 Before starting the Chainsaw project, I wanted to make a high-quality gaming asset. It all started with the fact that I wanted to hone my skills with the ZBrush + polish pipeline. To start, I photographed a real Husqvarna saw and did rough photogrammetry to quickly get a crude dummy. 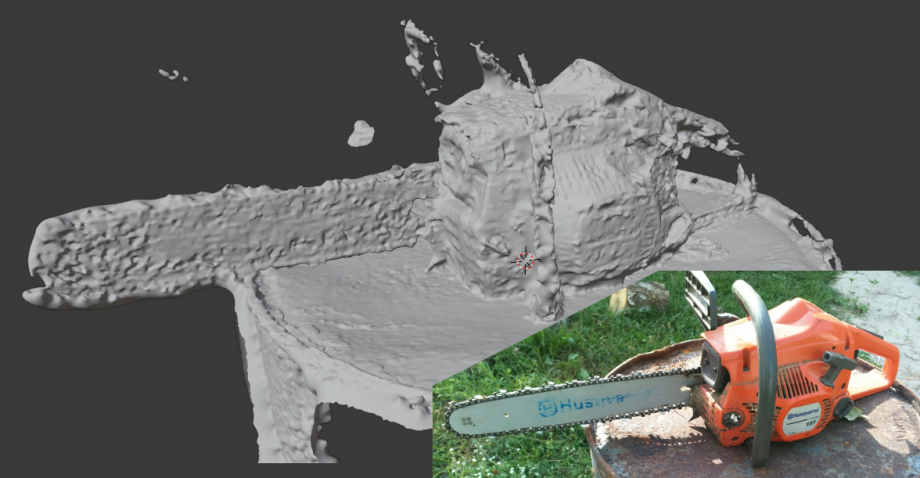 Then, I practiced working on the model in ZBrush and Blender. (The picture doesn't show all the parts I managed to finish. Some of them were lost because I didn't think I would need them anymore). But when I first showed the work in progress to my friend, he said something like: "Dima, you will spend a lot of time and effort making a good model, but it will be boring and not interesting".

At this point, it was decided to make a unique design of the saw. I have long wanted to try my hand at concept design. I thought of the game Wolfenstein (II). I really liked the restart of the universe, the design in this game is incomparable. I dream of working on this series one day.

Inspired by this, I once again reviewed my artbook from Dark Horse, and also collected some web links for style reference. I have subscribed to many artists from MachineGames and reviewed their work in detail on Artstation. And then, I started working on my own project.

NOTE: There are a lot of cool artists around, so you need to think the idea of the project through to stand out.

I collect references in several stages. At the very beginning, I find general information about the subject. I am looking for images of similar works, as well as style reference. After the blockout stage, I collect the links and images again. Now, I will focus on finding the details and what the mechanisms look like in reality. 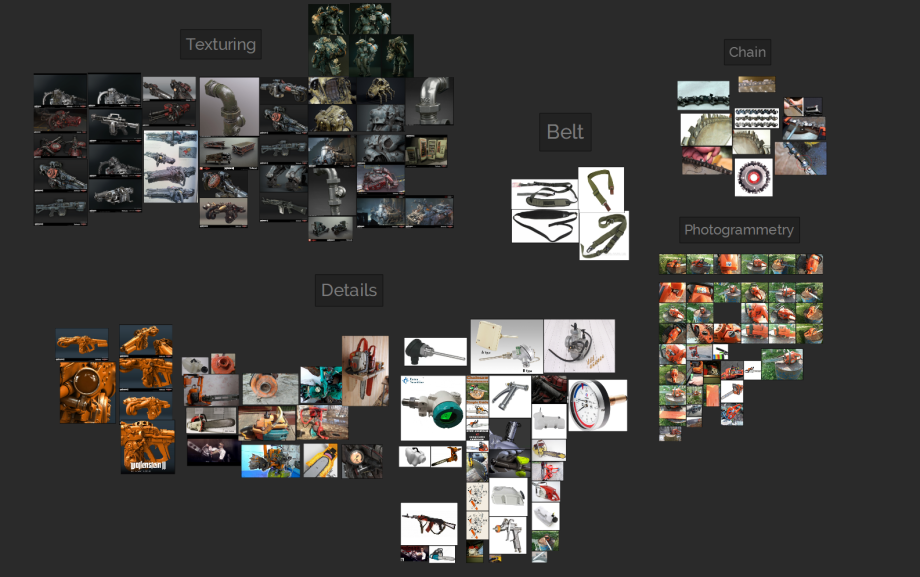 Blockout and Base Design

At the blockout stage, I first recreated the main components of the mechanism. I took the general idea and functionality directly from the existing saw.

It helped me a lot that I had previously studied in detail how a real chainsaw worked. All the main components of the structure have been preserved in the project, only the surface forms have been changed. 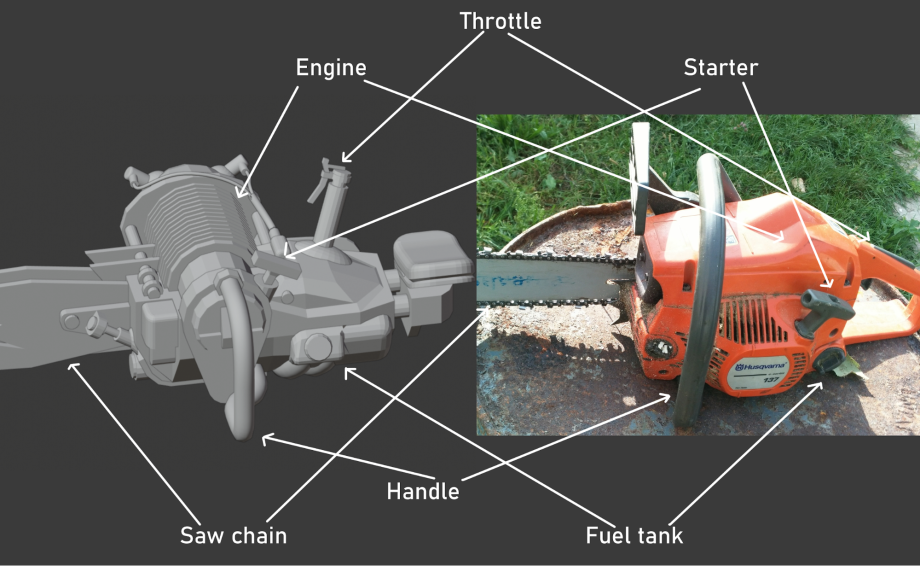 At the same time, I was thinking about design. During the initial stages, I pay attention to two key parameters: mass balance and silhouette. Let's start with the silhouette. This is the first thing the eye reads when looking at any object. The silhouette should be divided into sections with different line characters. The outer part of the object should not become a simple line.

As for the masses, here is a simple (but not always easy to implement) rule. The model is divided into three main types of objects by volume: large, medium, and small. The correct percentage ratio, as well as an interesting combination of areas with various details, will allow you to create an interesting design.

My approach to modeling is based on the following stages. I take the blocking elements. Then, I refine the forms and add details. After I finalized the mid poly, I can proceed in any order to create a high poly or a low poly. These stages go in parallel. It is often more convenient to do the high poly first. Sometimes some details strongly change the shape of the mid poly – for example, large folds on the skin – and you can pre-plan these moments for the low poly and avoid returning to them. This approach greatly saves time and simplifies the process of retopology. 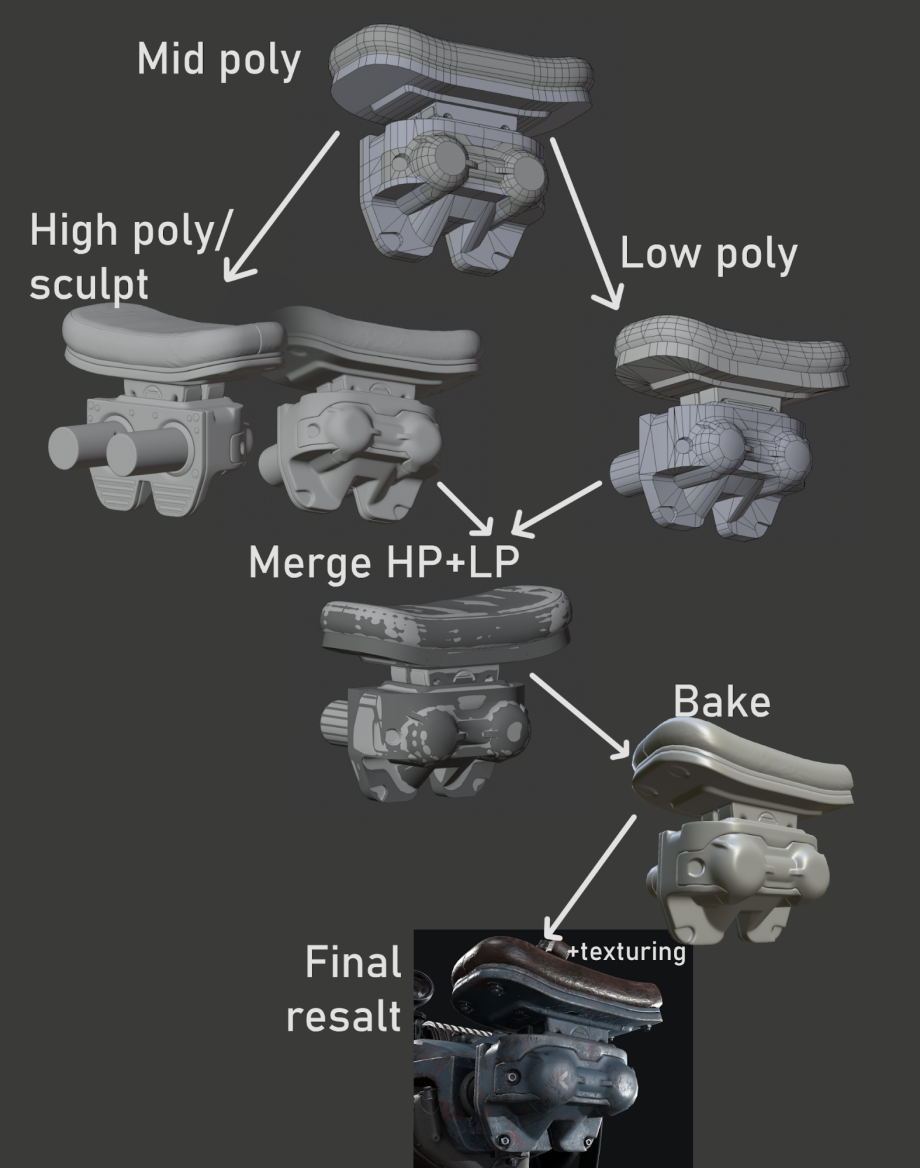 Working with UVs in this project was practically no different from standard practices. At the beginning, I set the seams and unfolded the parts. After that, I moved UVs to Rizom and slightly modified them: aligned the edges of the shells along the axes, set up overlaps. After that, I returned to Blender and made the layout in it. The saw model is divided into several UV sets of different resolutions. To stick unify them, I stuck to a single texel density value.

NOTE:  I used the Texel Density Checker addon to check and adjust the texture resolution.

With regard to modeling, the shape of the belt is simple enough that most of it can be done procedurally. To do this, I added the usual Bezier curve and positioned it on the saw. Then, I added a few more key points and adjusted its shape. Then, I gave it some volume. At first, it got the shape of a tube, but you can also make it flat and adjust the thickness a little. In the end, I set up the correct turns of the segments – Ctrl+T hotkey.

For the chain, I used the usual approach. First, I created an element that would repeat itself. I added an array modifier to it to extend the chain. Then I added a curve modifier and configured the chain curvature along the curve. In order for the chain to accurately encircle the neighboring part, I copied one loop from the block and separated it into a new object. I added a sub-split modifier for smoothness and then converted the resulting loop into a curve – Alt+C hotkey.

For the initial segment of the chain consisting of several links, I made a UV scan in advance and compiled it in an atlas. This has accelerated and simplified my further work at the baking and texturing stages.

Most of the high poly versions of all objects were created in ZBrush. At first, I take the mid poly and work with its UV. UV islands will later be converted to polygroups, and I'll mark them up so that the seams pass through the model's facets. Next, I upload the model to ZBrush and use auto seam with UV. Then I increase the number of polygons using dynamesh and get the final result through a number of different polishing modes in combination with masks. This principle is well described by Simon Fuchs in his cool Military Radio tutorial. I even use the interface settings from this course.

Some details were further refined with brushes. I also use a layer system to easily manage various details. For large surfaces, I use the alpha with microfracture. This allows me to quickly achieve an acceptable result. Then, I slightly modify the surface in the manual mode. This is not the best method for detailing, but it saves a lot of time. 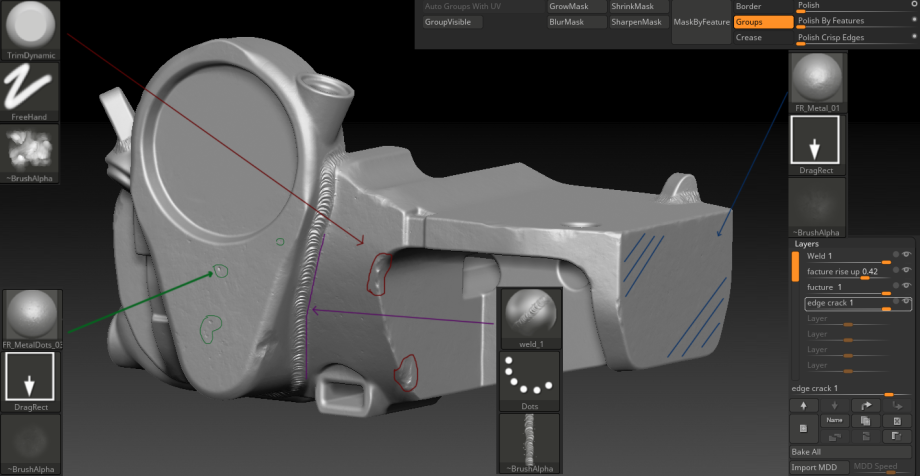 NOTE: I used the GoZ (GoB) addon. It allows me to transfer a model to ZBrush and back to Blender with a single key.

The body material has the following structure. First, I assign a metal material, usually steel, focusing on what material engineers would use in the production of a particular part. Then, I set up a group with paint. I make some variety in the roughness map. Then, edit colors: make slightly different shades on the edges, add a light overall gradient from bottom to top. This increases the readability of the model. Then comes the setting of decorations, rust, dust, scratches, scuffs. The texture follows the logic of the layer order and repeats the actual production and exploitation of similar items in real life.

NOTE: Add color spots, it's hard to look at a grayscale model.

I used different alpha masks to finalize the textures of metal, paint, and leather. Usually, I take a photo I like from a website like textures.com, convert it to black and white, and play with the levels parameter.

NOTE: Set the alpha aspect ratio to 1x1 in advance, otherwise it will be distorted in SP.

Some textures have a more complex structure. For their realistic reproduction, it is worth studying the structure of the prototype in detail. For example, the leather material. It has textured pores, in the depth of which more dust accumulates and where their glossiness is at zero. In places of contact, the skin is rubbed and also becomes rough but lighter. Dry skin on the creases may crack. The more such nuances you note, the more realistic it turns out to reproduce the material.

NOTE: Analyze smart materials. Inside, you can find some interesting layers that can later be used separately from the main material.

The lighting setup is close to the standard lighting scheme. According to their purposes, lights can be divided into the following categories:

The most important quality of the light is how easily it allows you to read the shape of an object. The light should emphasize the curves and design solutions in the model.

As for working with shadows, I adhere to the following rule: one source of illumination is a point light - from it comes the main shadow. I would like to disable other shadows altogether, but then the model starts to " glow”. As a solution, I add size to the other sources, and the shadows become soft, blurry, and less noticeable.

It was a difficult project for me. I tried to show the top of my current skills and even touch upon something I had not worked much with before, such as design.

Since I was working full-time during this project, I had very little free time – just a couple of hours on a weekday and a little more on weekends. In order to organize the work a cording to the available time, I wrote down all the stages in a notepad, divided them into parts relative to the model elements, and prescribed the approximate time I planned to allocate for this task. For example: Modeling-belt-1.5 h. Thus, I got lists for each element. In general, I can say that for various reasons I was running out of time. But reference points kept my working mood up and helped me track my progress.

I also experienced a lot of psychological stress. When the first idea (pre-project) tuned out unsuccessful, I strongly wanted to quit the project and do something else, but it's a good thing everything happened this way.

Thanks to my friends Stanislav Teslenko and Artyom Antipov who helped me with high-quality feedback and moral support.

I will be happy to talk to you and listen to your comments or suggestions. You can contact me here: