Thaine Lyman: I started at Activision, spending 17 years there in a variety of roles. I originally joined them as a lawyer, then moved into production. I spent about a decade on Call of Duty; I was a Senior Producer, an Executive Producer, then VP of Production on a bunch of games, and finally, I worked for 5 years on Destiny among other projects.

Then in April 2015, I joined Wargaming. I took what I thought was the big move from LA to San Francisco. And then about 6 months later, I was offered the opportunity to work on World of Tanks PC as the Executive Producer. I then moved from San Francisco to Cyprus theoretically, but I was really spending a lot of my time in Minsk. And now I’m the General Manager of Wargaming Mobile, having made the full-move to Minsk this time.

The Decision to Port WoT Blitz to Switch

World of Tanks Blitz has always been a “mobile-first” game designed for portable platforms, but it’s a very non-typical mobile game – much more of a “mobile console” game as our CEO Victor Kislyi likes to call it. High action, a real “gamer’s game” and not the typical “alarm clock simulator” that many mobile products are – hit a button, harvest a resource, wait 3 hours to hit another button again.

The Nintendo Switch, as the world’s first true mobile console system, is the perfect platform for the game’s expansion as there’s a lot of overlap in terms of playstyle and audience. We have a goal: to make World of Tanks Blitz accessible to every player worldwide, no matter their platform preference. By launching on the Switch, we’re hoping that a whole new bunch of budding tankers become part of our ever-growing community!

As I touched on before, the Switch and World of Tanks Blitz have a lot of the same core values: we’re both firm believers that our players should be able to play when they want, whenever they want. Also, the Switch is one of the most successful and rapidly-growing platforms out there right now, and to be the first Wargaming title on there... well, we take great pride in that. 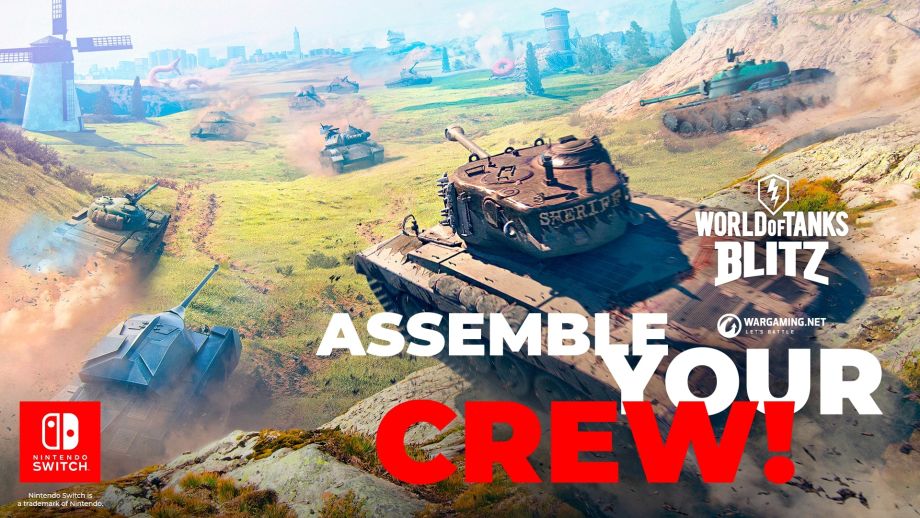 Specifics of the Platform

We spend a lot of our time and effort improving and optimizing our game so that every one of our approximately 29,000 different mobile devices can run Blitz as best as it can. Adding the Switch to our platforms isn’t such a big challenge as it’s just one more device added to our diversity, but it means a whole heap of new people can play the game we’re so passionate about. In terms of limitations, compared to many mobile devices that can run Blitz, the Nintendo Switch has pretty great specs.

Our team has worked on multiple ports of Blitz now for various platforms and each one features cross-play, so we have a wealth of experience in that regard. Of course, there are some intricacies of the Switch, so it took us some time to digest all that information so we could utilize some of the console’s unique features. Obviously, getting accustomed to a new platform can take some time, but Nintendo have been really supportive throughout our year-long journey.

The Switch is slightly unusual in its setup; it has a powerful GPU, but a low-frequency CPU. This meant we had to change some of the game’s architecture to make sure it was optimized for the platform, just as we do for all other devices we support. Most of the optimization was done around splitting different functionality between different CPU cores to ensure a stable performance at 30FPS. To give an example, we moved particle simulation into a separate thread.

We will continue to optimize the game on the Switch and every other platform. For the Switch specifically, we are looking into further graphical improvements, implementing inverted controls and custom control options, as well as something a little bit more challenging, but we don’t want to give away what that is just yet. 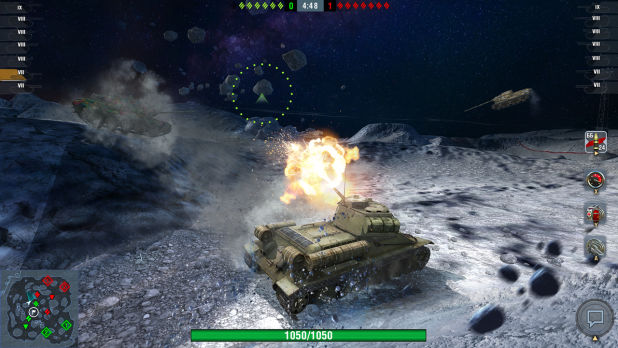 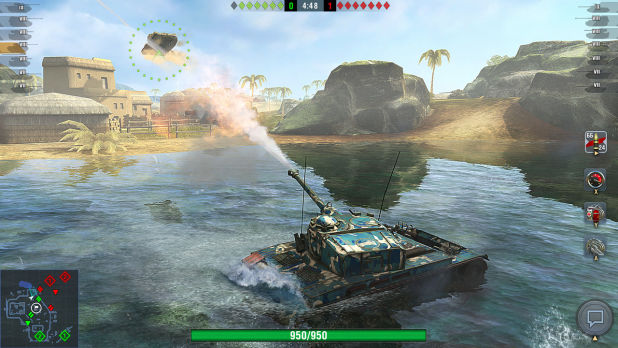 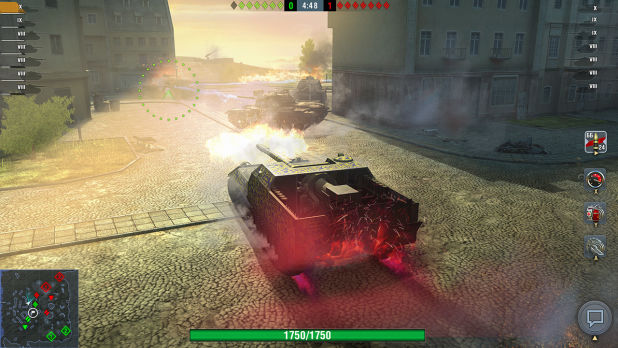 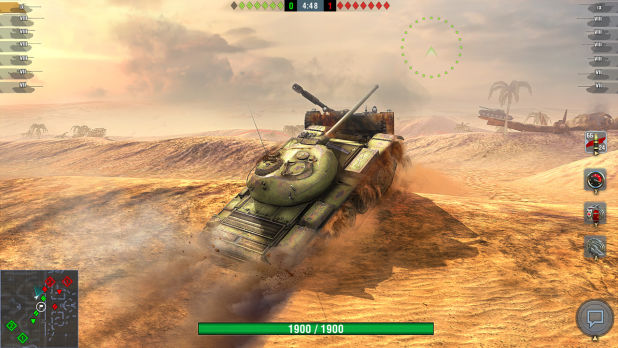 Who Worked on the Switch Version?

The Nintendo Switch version of World of Tanks Blitz was fully developed in-house. We have 240 people in our studio, 200 of which are involved in the development of the game. We do have some of those people in a few different office locations, so we do “distributed development,” but we haven’t really used much outsourcing. The development for the Switch version took about a year, and our team has continued to support the game continuously with frequent updates for our other platforms. At various points in development, we had up to 30 people from the team working on the Switch version.

Funnily enough though, the Switch version initially started as a passion project for some of our development team. They really wanted to get to know and understand the platform and see if they could make it work. Once we saw what they were able to do with it, we quickly made it an “official” project and started to grow the team to support the development.

We have developed the support of the gyroscope specifically for the Switch. It wasn’t without its challenges, namely gyro aiming. We held several playtests to find the best sensitivity setting. It just so happened that it became so convenient to aim with the gyroscope that you sometimes forgot about controlling the camera with the right analogue stick. 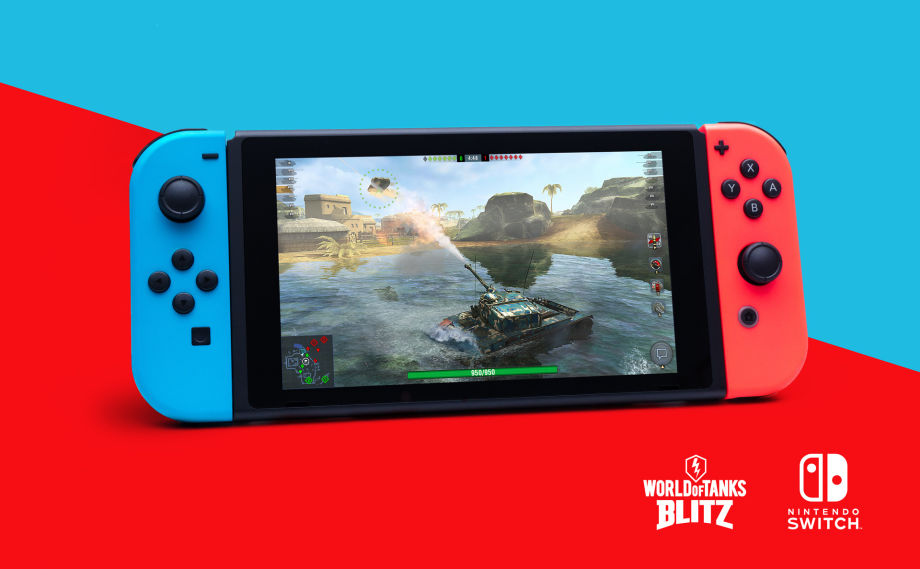 Also, joystick support. Our game has quite a complex in-game menu and it’s quite the task to assign every menu section or command to a joystick. We used to have joystick support before on mobile, but you could only use it in battle. In between battles, players would use touch controls. This solution worked well for mobile.

On the subject of joysticks, one thing that we have to make sure of is that the controls feel amazing no matter if you’re using keyboard and mouse, touchscreen controls, or the Joy-Cons. What’s a shooter without great controls after all? Our players expect the controls to feel natural and responsive, as well as easy-to-use. That’s why we make sure they’re as perfect as can be from the outset.  We’ll always keep tweaking and adapting them based on user feedback and data, of course, but we feel really good about the controls now and we’re excited to see so many new users, who never played Blitz before, coming on and enjoying themselves by playing the game for the first time on the Switch.