Dmitry Svetlov from Odd-Meter talked about their new project INDIKA that's being made in UE4 and their experience of developing their own game as an aspiring indie studio.

Dmitry Svetlov: Our studio is over 10 years old. But for many years, we were mainly engaged in archvis — we made 3D graphics for architects and developers. At one time, we got very excited about becoming the first studio in Russia to offer architectural presentations in VR, so we ordered the first Oculus devkit and one of our employees started to study Unity. Then we switched to Unreal, found out that in UE4 you could make a full-fledged game without writing a single line of code, and decided to try our hands at a game project (as people who have optimized and released a VR game for PlayStation, we can confidently say that you indeed can do that without code).

By that time, I already had some experience in indie game development and although it did not result in anything good, it proved that I wanted to move in this direction. This is when the idea of our VR game SACRALITH: The Archer's Tale appeared and was implemented. The success (although modest) of SACRALITH instilled confidence in ourselves.

Now our studio is working on the second game, while the entire archivis has been moved to remote work. The core team consists of 7 people, each with their own area of expertise – I am the team lead and art director, and with me, there are a game designer, programmer, animator, 3D modeler, level designer, level artist. We also have a freelance character modeler, screenwriter, and sound designer, plus some other people who work remotely from time to time.

Previously, taking photos required complex expensive equipment and theoretical and practical knowledge, while the creative component was somewhere in the background. Nowadays when anyone can take technically superior photos, the artistic and meaningful value of the shots comes to the fore. The same thing happens in game development. After studying Unreal for a month, anyone can assemble an almost photorealistic scene in the engine, customize a character, add destructibility, artificial intelligence. The difficulty lies elsewhere — to give meaning to all of this. It becomes more interesting that way, both for the player and for the developer.

Speaking of the coming technologies, we are very inspired by the presentation of Unreal Engine 5 – if we understood everything correctly, the process of preparing assets can be greatly simplified. I also constantly read news about the introduction of AI technologies in literally every process. Just today, I read about procedural facial animation driven by AI. I believe that soon we'll get access to working mockups without complex systems.

In fact, INDIKA is a horror game. First of all, though, we've set the task not to scare the player, but to tell the story in a "language" unusual for the genre. We have written a long script, the rest was actually built around it. As for the context, aesthetically and dramatically, the Russian Empire and the Russian Orthodox Church are a poorly-developed territory in the gaming industry. For us, however,  it is a topic we understand and can relate to. I've always liked looking for beauty – or at least aesthetics – in those "places" where one usually finds something else.

Events take place in an alternative fictional Russia at the turn of the 20th century. INDIKA is a story about a young nun who talks to and wants to get rid of an imp, and about a fugitive convict who believes he can speak with God. The story is boring and dreary, inspired by the works of Dostoevsky and Gogol. From a dramatic point of view, we are trying to find a unique touch – after all, we are a small studio and can afford an unconventional approach, without regard to economic expediency. 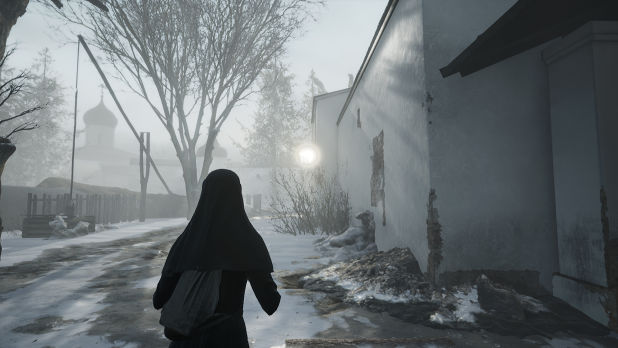 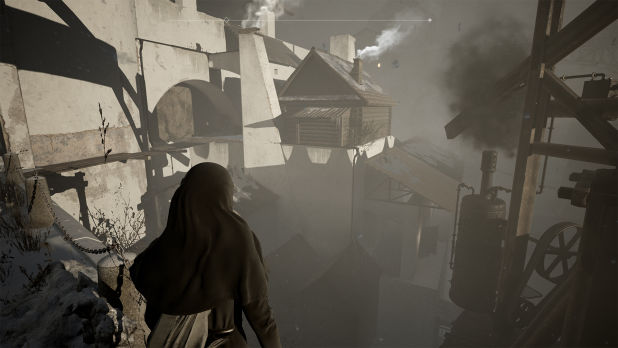 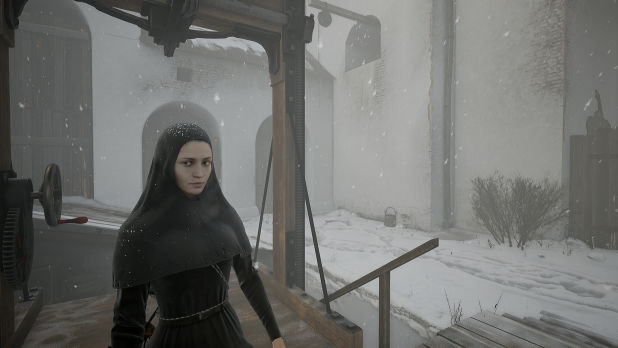 The events you see in the gameplay video take place in an industrial area of a fictional city. Our process of creating the world is quite traditional. Based on the plot, artists draw many sketches. From these sketches, our level designer assembles a blockmesh in Unreal, our modeler creates the necessary geometry, and the level artist turns it all into the final location. 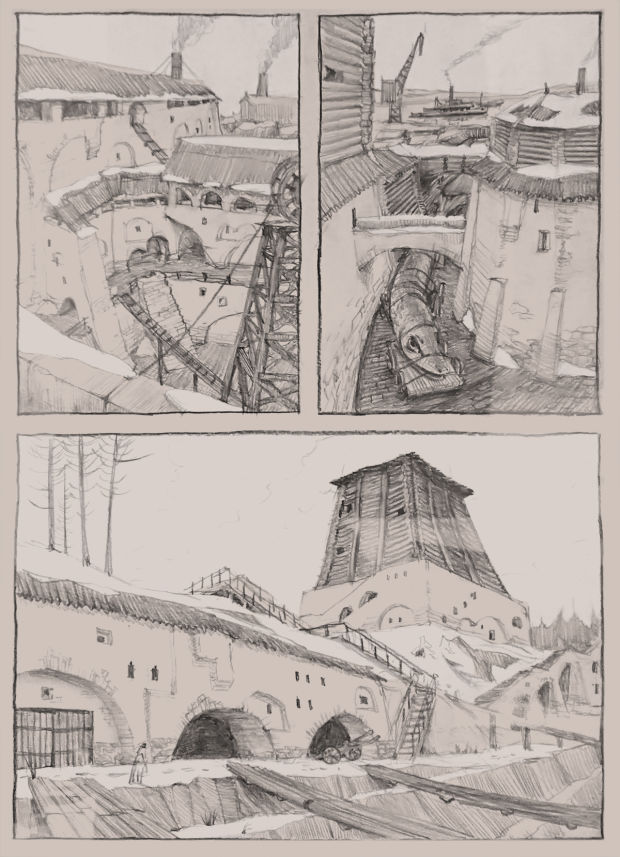 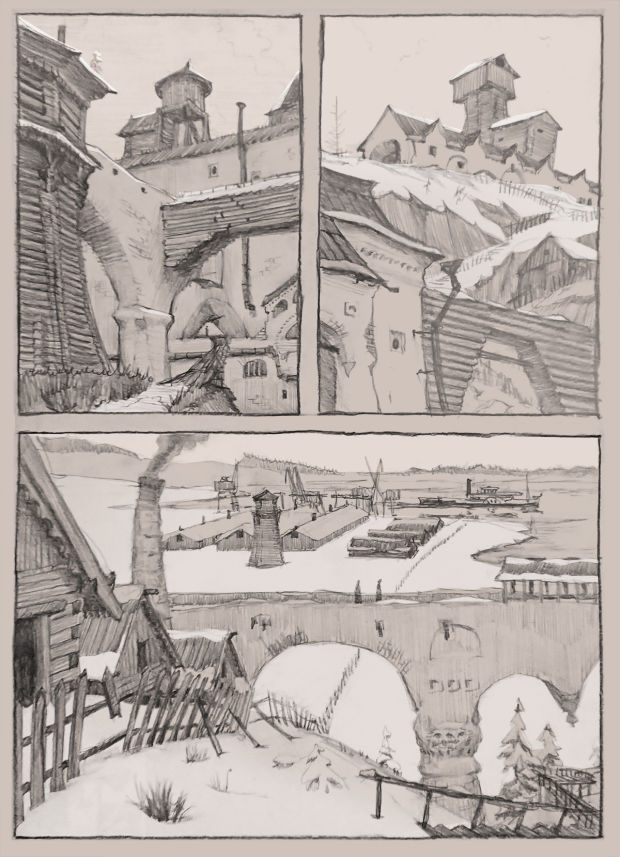 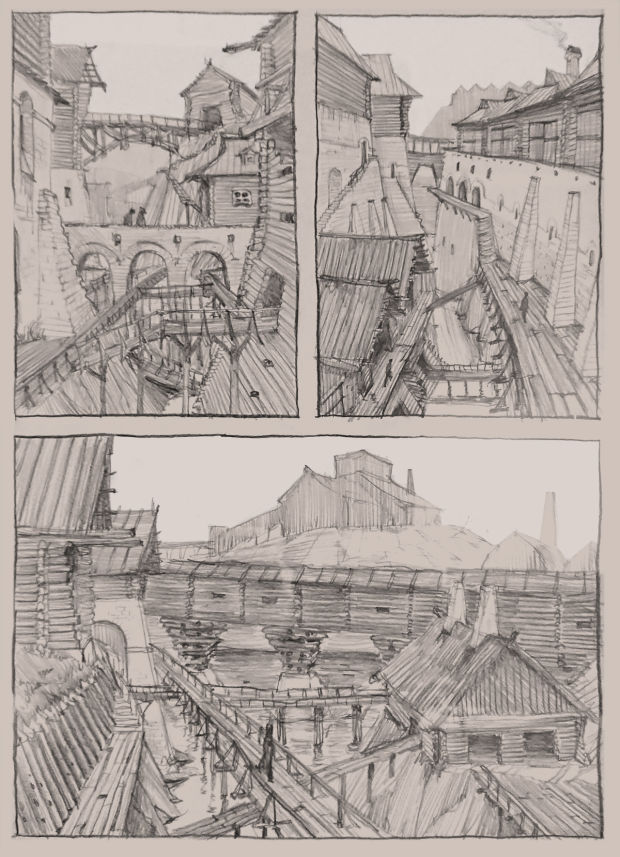 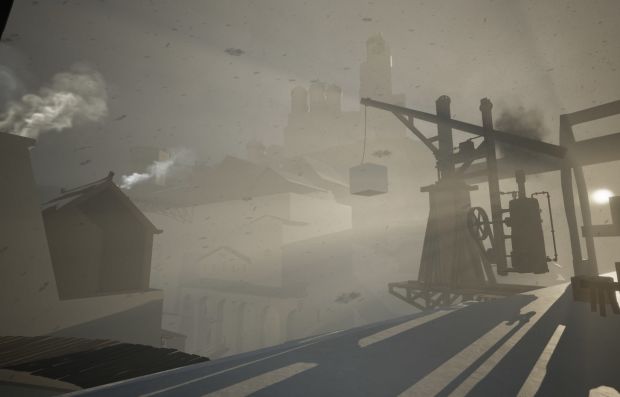 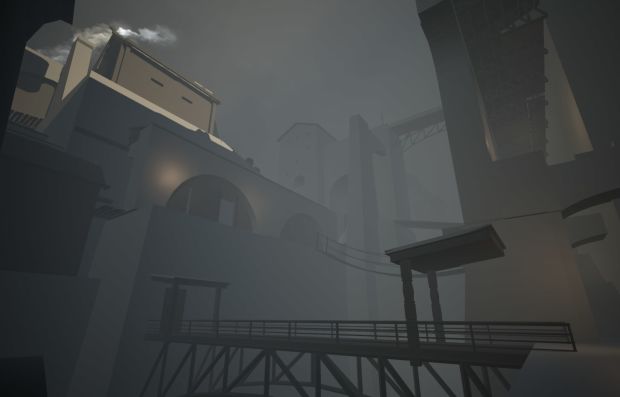 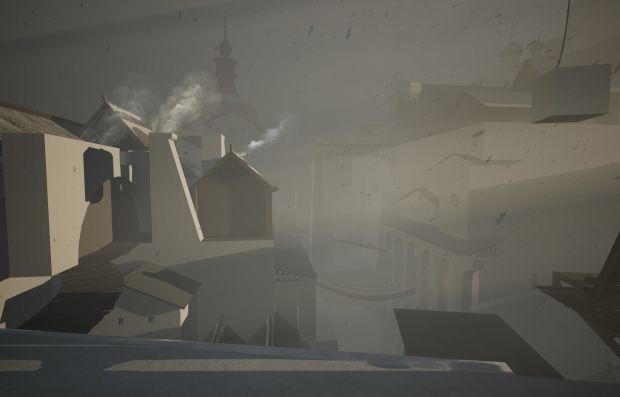 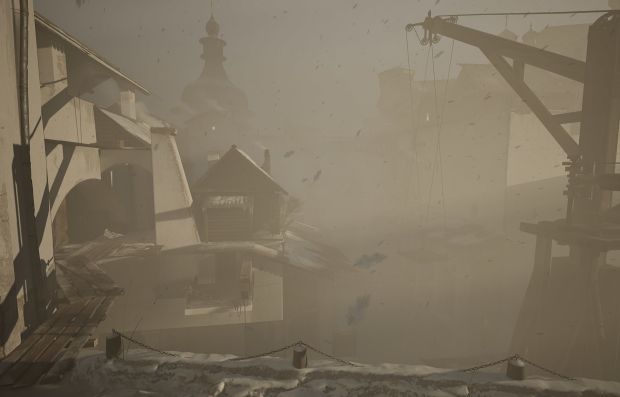 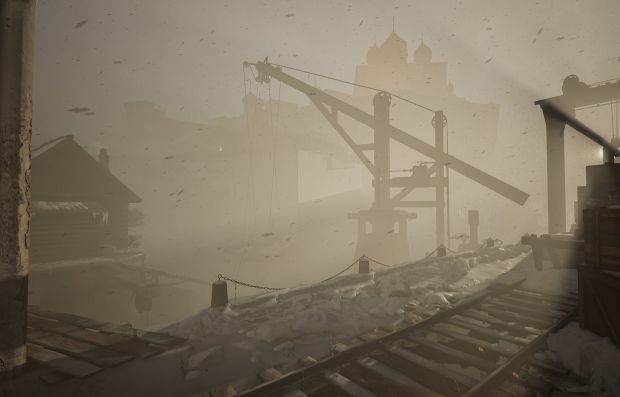 Most of the geometry is modeled from scratch. For texturing, we use Megascans as well as take a few models from their library for props, plus buy some stock models. In Unreal, we've set up quite complex master materials that allow us to use vertex paint for applying dirt, rot, and snow. For materials, we use a combined technique — tiling textures with baked masks and normal maps. This approach allows us to maintain high texel density and save on geometry.

In general, our architectural background helps in the design of both interiors and exteriors, although at first, it seemed like it was doing the opposite. We constantly wanted to make diluted minimalistic forms and with the knowledge of how actual structures are built, fictional buildings caused professional panic because: from the architectural point of view, they wouldn't stay up! – or – this staircase wouldn't work! For optimization, we use the LOD generation system in Unreal, it does its job perfectly. Maintaining the general style is really important. In this regard, materials play a key role. The model can come from any source, with any polygon count, – but if you set up materials correctly and adjust the saturation and colors, it will fit in. 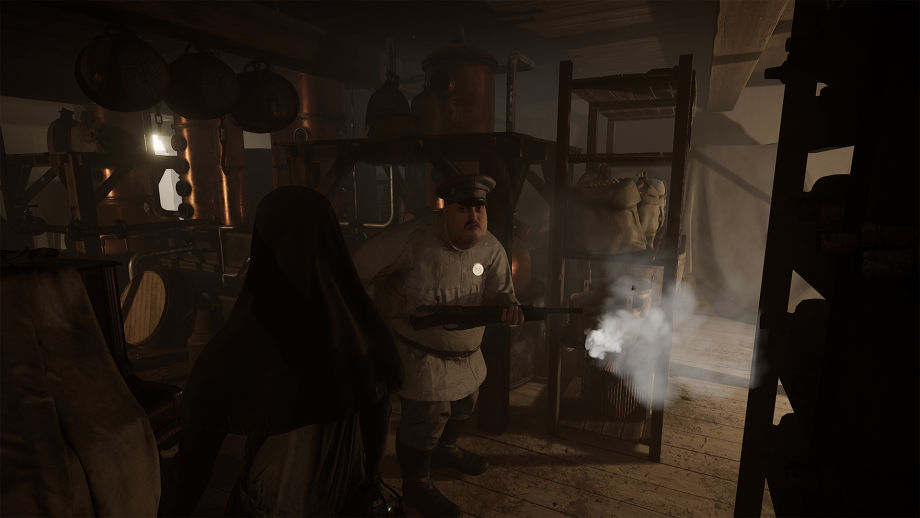 For facial and body animation, we use a mockup as a base. But each animation must be finished manually and some are remade from scratch. Initially, we wanted to make the body and the facial animation at the same time from the movements of one actor. We built an indie version of the head rig from a snowboard helmet and a GoPro for use with the Dynamixyz facial mockup system. But in the end, we created all the facial expressions from my movements and heavily refined them by hand. It is very difficult to foresee everything at once.

We spent the most time working on the clothes of the female lead character and it took us 47 iterations to get them right. We use Unreal's tool to adjust the fabric. The basic setup is easy, but it took us months to make everything look good. We've also tried the "Japanese" approach creating basic animation for fabric with bones, then adding simulation.  We've tried to use all sorts of variations of the model itself and fake the results, but something always went wrong – the fabric behaved ugly, or with sudden movements, it fell through the body, or the simulation lowered the performance.

We tried to create a dull oppressive atmosphere, so we deliberately did not use supporting fake lights that make the picture rich and dramatic. On the street, there is only one HDRi. All right, there are fake lights in a couple of places, but you never know where they are. With candles, it's also simple – a pair of sinusoids multiplied together to set the intensity and position of the light source. 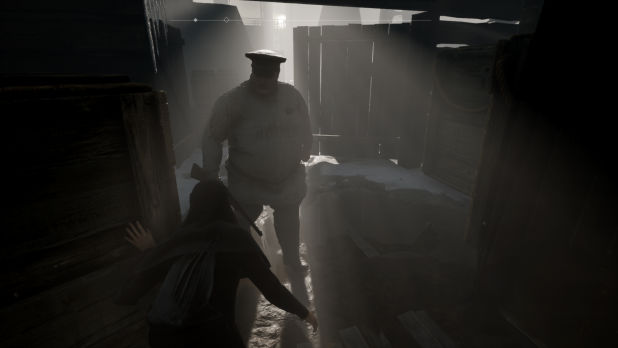 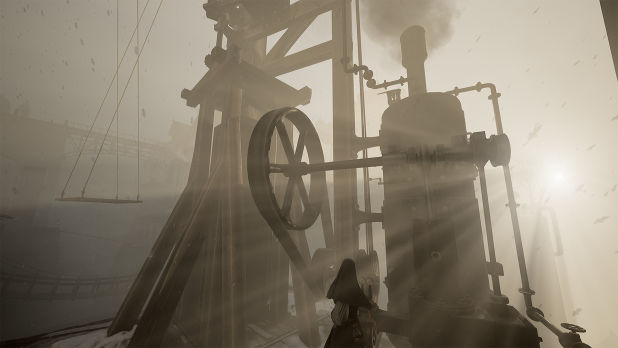 Even when we were working on the archvis projects, we compared the quality of graphics (it was the main priority at that time) in Unreal and Unity, and the choice was obviously in favor of Unreal. In my opinion, the challenges of game development mainly come from the creative aspects — it is difficult to make the game interesting. The main tool that helps deal with technical difficulties is Google. Almost any problem has already been come across and solved by someone. We do not use plugins, regular Unreal tools are enough for our purposes.

For us, the main difficulty is finding the right people. It is not that easy to find experienced people in our genre in Russia, so we have to look for very talented ones instead.

For the game release, we're planning to find a publisher. There are already many proposals, we are choosing the closest in spirit. The game is planned to be released in 2022. We are planning a release it on PC and consoles. 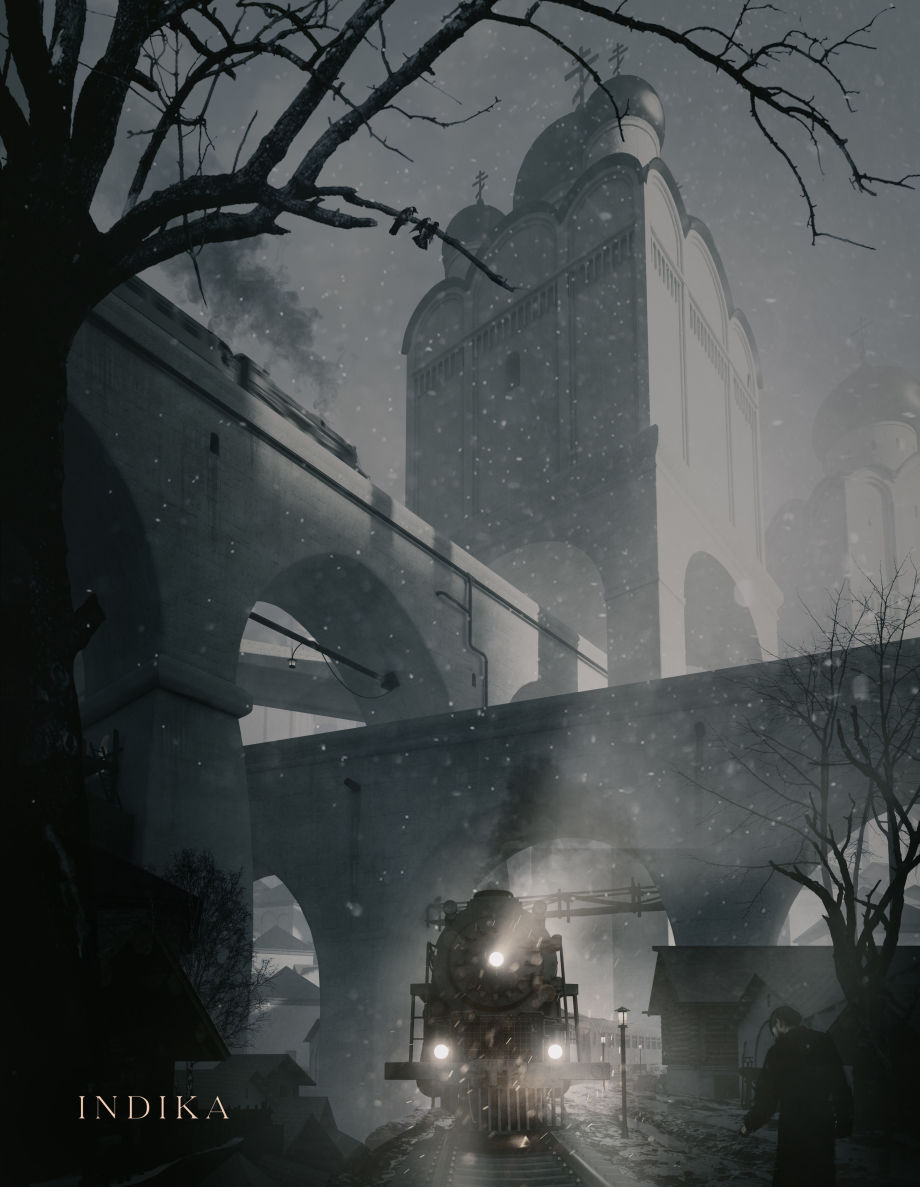