Marko "Zets" Prpic talked about the tool he's been working on that allows to quickly generate terrains in Blender.

Hello to all the 80.lv fans and followers. My name is Marko Prpic AKA Zets. People who are reading this article, among those who have heard of me, most probably know me as the guy behind the IFCC and Boonika projects.

I studied at the University of Zagreb, Faculty of Textile Technology, and worked as a designer and art director at various companies, mostly advertising agencies. That is where I saw some of the possibilities that 3D offers.

I am also very interested in Concept Art (thanks to Bjon Hurri) and in all forms of creative expression. In the past, I did graffiti/street art, painting, and sculpture. I like doing some weird videos from time to time and even experimenting with sounds and music. I love creating.

What Do You Think About Current Terrain Tools?

I am one of the biggest Gaea fans. I haven't tried others and I don't know if they are better or not. I will stick with Gaea because I am a big fan of its creator Dax Pandhi who is an amazing individual. It is incredible what he and his team have managed to pull off.

I was missing speed a lot. Doing a node setup every time from the beginning was killing my creative process. I needed something that would work fast and allow for unlimited variations and modifications. When I realized that it wouldn't be just a few-hours job, I decided to go all-in and build something that would be useful to others as well.

The node setup is really complex and I have even used some of the nodes in a very unusual way so I could achieve the result I wanted. The good thing that most of the nodes are grouped and framed which allows the beginners to start with moving sliders left and right. Math nodes and RGB Mix nodes play a very important role, as well as the Color Ramp various texture nodes. Simplicity is the key and that's what Terrain Mixer offers. Everyone who watched my short tutorials with understanding can now use 'Material Mixer' the way I am using it. I am still not ready to offer it as an addon with the custom UI element/shelf inside Blender's UI because there are at least 10 more major features to be added before the end of the year. 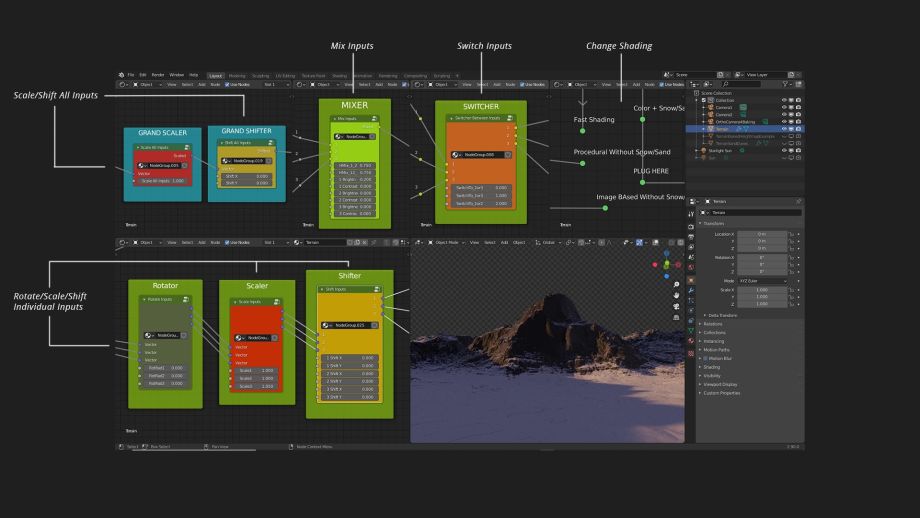 Advanced Blender users will feel right at home. Beginners won't have to worry about Cycles and nodes too much because all they have to do is move sliders. The package contains visualizations that explain the main functions. Those with a deeper knowledge of how nodes work will be able to introduce their own witchery to the workflow.

There are seven 8K heightmaps and seven 8K diffuse textures and a lot more will be added in the future, as well as some other treats which will make the creation of complex terrains a lot easier. Adding maps is super easy because they live inside the Image Texture node.

I am a software junky. I think I tried 90% of all the 3D software out there and I know about those that I haven't through the experience of my friends and colleagues. Blender is a beast, but a really friendly beast. No one expected that it would live so long and go this far. Remember, it has been here since 1994, and its future didn't seem that bright at some point. But Mr. Ton Roosendaal and the people surrounding him never gave up. Of course, being an open-source software gives it an advantage over all the other competitors. Not every open-source project is a successful one, but those that are, like Blender and WordPress, can literally change the face of the industry. I love Blender (but I still want to learn Houdini), and not only because it's free. B3D just works much better than we deserve.

As mentioned above, the addon will happen but I don't want to rush it. I know from experience that it is never wise to get involved in more than one can handle because it will only cause problems. The most important thing for me is to teach people how easy it is to use it in its current state. Good addons are fancy and useful solutions and that's why we love them, but in this particular case, no matter how well we do it, it will never be as simple as the raw node setup within the Terrain Mixer .blend.