80.lv had a chance to talk with Rick Lesley from Runic Games and discuss the production of the amazing levels of Zelda-like project Hob.

My name is Rick Lesley, and I was a Senior Level Designer on Hob. Before Hob, I was fortunate to work on games including Middle-Earth: Shadow of Mordor, Forza 5 and Blacklight: Retribution. As a lifelong gamer, I decided to pursue game design professionally during my time at Michigan State University, where they had just introduced a specialization in Game Design and Development. I was able to start learning about game design and get some experience in Unity, back before it had really taken off. When I moved to Seattle after graduation, there was a studio called The Amazing Society that was looking for designers with Unity experience, and it was a matter of being in the right place at the right time and having that background in Unity from college. 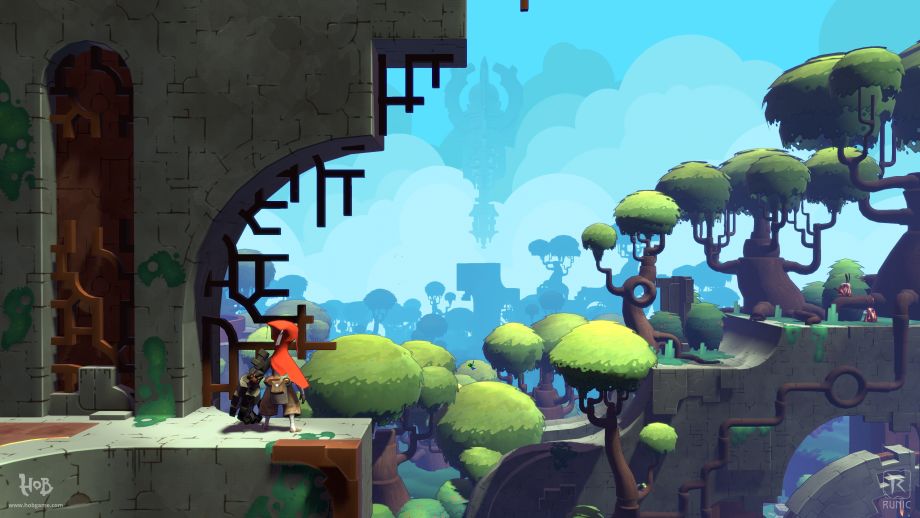 The Levels of Hob

I joined Runic after the release of the Torchlight games, but I’m happy to shed light on our level design process for Hob! Hob, overall, evolved quite a bit from when I first joined Runic to when we launched. We went through many ideas for the world structure and ultimately ended up with the more open-world structure you see in the final game. Since we were experimenting and iterating so much, it meant that we had to be quick on our toes!

We had to be willing to build out an area to a rough state and make a judgment call about what would work and what wouldn’t. If it didn’t work, we moved on as quickly as possible. This has positives and negatives to it; it allowed us to build the whole world into a rough, and somewhat playable, state very quickly, but it also meant that there was a good amount of content that was thrown out, and some content was harder to go back to and polish toward the end of production. On top of this, there were some game progression reworks that came in late, and it made for a pretty chaotic world to build. Seems fitting, looking back on it! 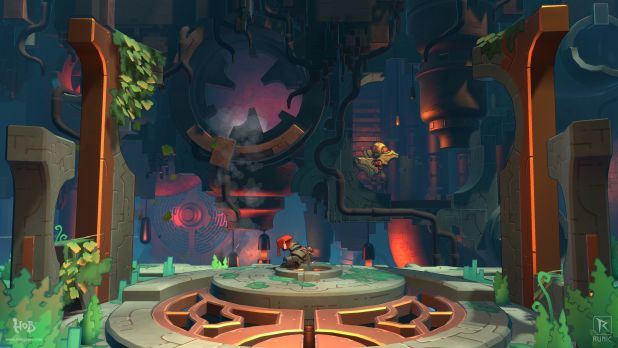 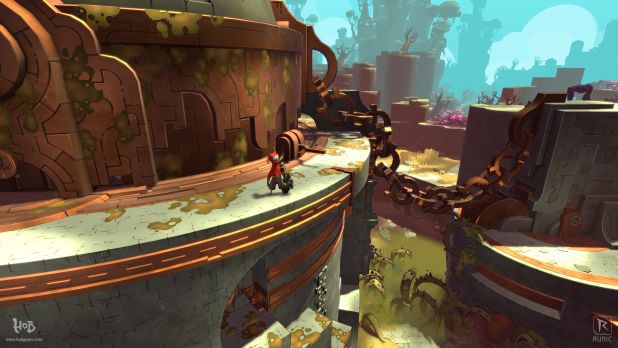 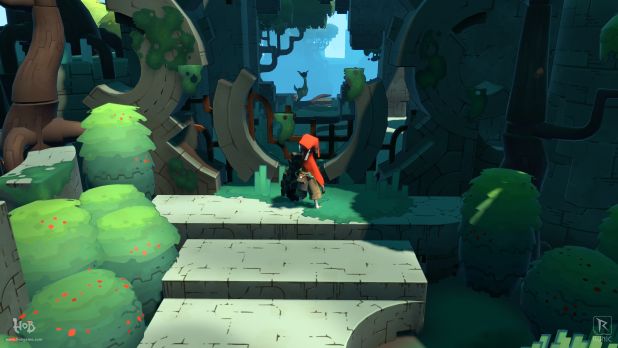 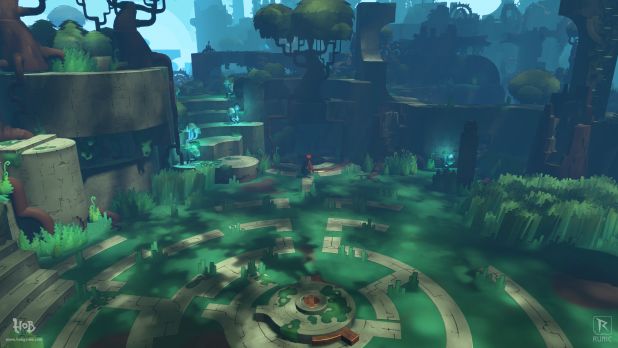 It was very difficult! Honestly, we were tweaking and polishing the narrative and general progression right up until ship. We relied heavily on playtest feedback to help us identify what was being visually communicated well and what was too vague. But this came with its own challenges. One week we’d have a group of players who would make it through the whole game without getting stuck at all, and finish in record time, and the next week we’d have people who were constantly lost and needing help. It was a balancing act of trying to nail the right amount of info to give players, so they’d have an idea of where to go next, without feeling like we were holding their hands the whole time. Overall, we were pretty happy with players’ interpretations of the story moments in the game, even the more abstract narrative moments like our ‘lore’ rooms.

As a team, we would establish a theme or style for each unique zone, leaning heavily on concept art and the main mechanics planned for the space. From there, once we each took on our own areas, it was more of a personal preference for blockouts. Early on, I personally liked to use the most basic shapes as possible to get the point across at first, which allowed for quick and efficient iterations. I tended to grab co-workers and have them playtest my areas as soon as they were functional. It’s also helpful to add some placeholder combat to the basic spaces, so you can gauge what fighting within the geometry of the space feels like. Too cramped? Too open? Too much verticality?

These are some of the things I’d watch for in early playtesting of space. I took the approach to fail early and fail often, to really hone in on what would work. I think if you can create a space that is fun and interesting for players before any art has been applied to it, it will be that much stronger once it has been polished and fully decorated. 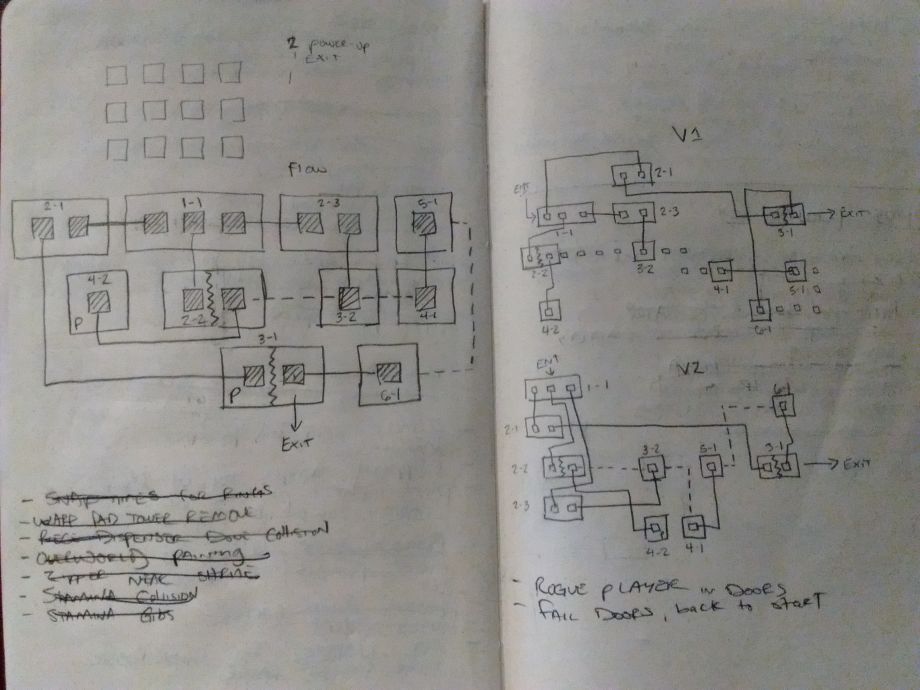 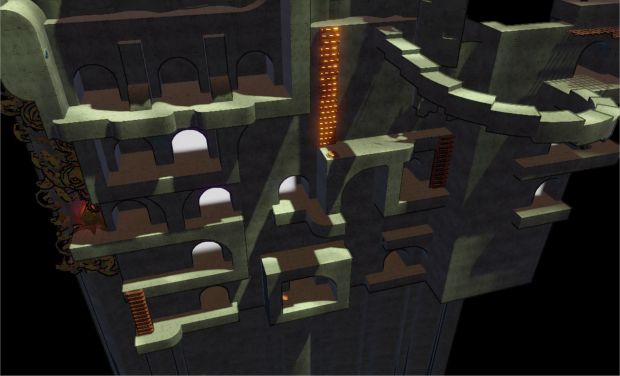 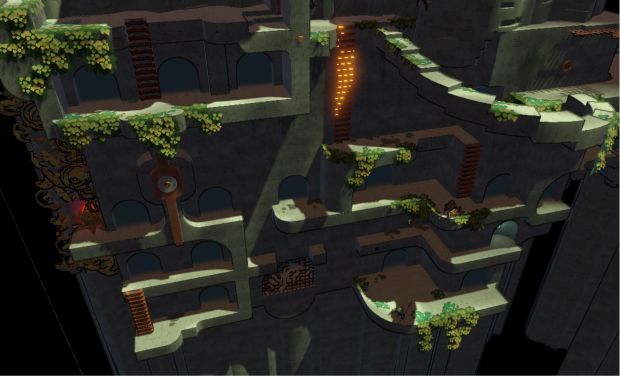 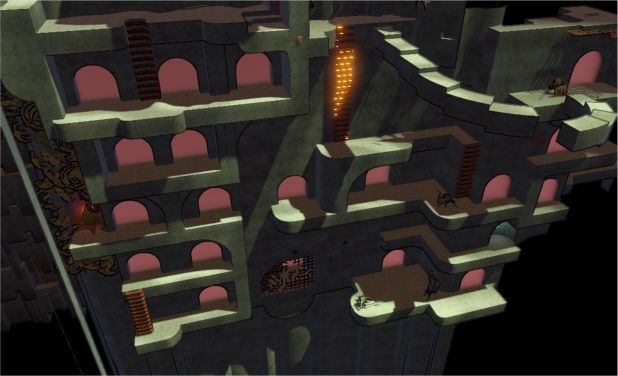 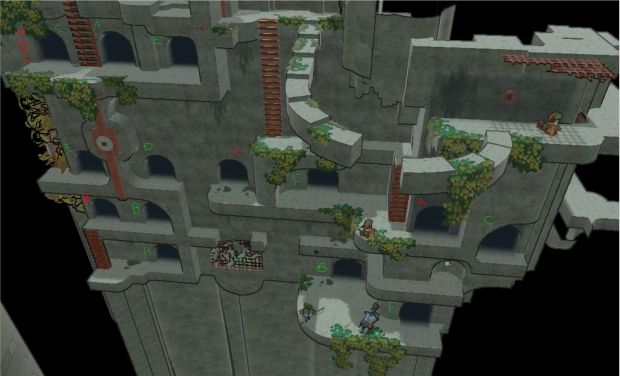 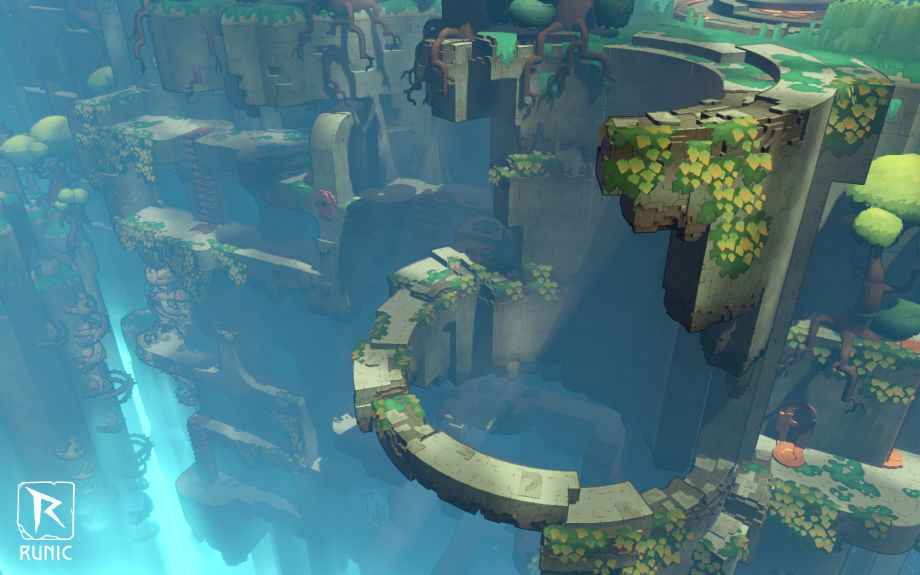 This was a particularly tricky part of development. As a level designer, you always have to be thinking about the camera! It was increasingly difficult with multiple people building different spaces that were adjacent to each other, trying to make them work together. Luckily we were a very small design team, so we were in constant communication with each other while working in nearby areas.

For the most part, we tried to limit custom cameras as much as possible and to design areas in a way that complemented the camera design, but some areas did need a specific framing for a particular scene/puzzle. We went through many different solutions to camera issues, with a lot of testing and bug fixing, and landed on the dithering effect that you can see on the foliage in the game. 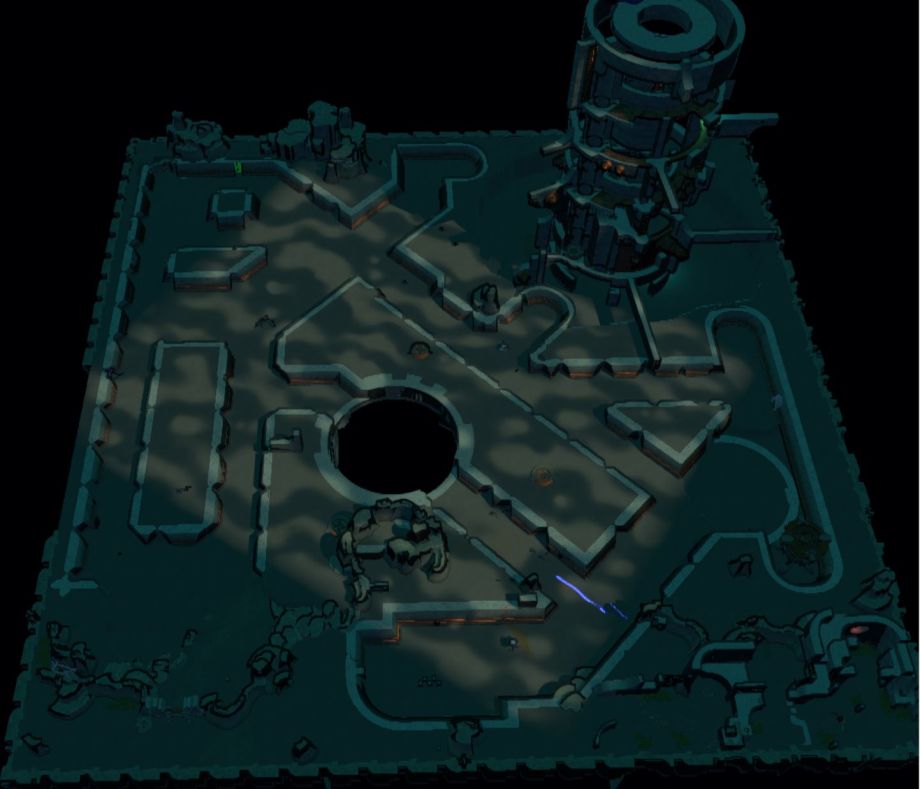 When building an area, we were always cognizant of players’ experiences prior to entering the new space, and what sort of gameplay should immediately follow. We tried to give the player a lot of environmental hints about mechanics to come down the road, as early as possible. Maybe a player wouldn’t understand what a Grapple Point was when they first saw it, but once they got their Grapple Glove they would hopefully be reminded of something they saw earlier in the game, and be motivated to go back to the previous areas and explore again, now with their new glove ability.

In the zones where players receive new glove abilities, we focused on building the entire zone specifically around that ability. For instance, in the Electric Zone, there are Warp Pads visible as soon as you enter the zone. A lot of the puzzles in the zone utilize the Warp Glove, to further reinforce the language of the ability. We wanted people to immediately understand what it meant to see Warp Pads in an area, and I think we did a pretty good job of communicating that.

The puzzles were prototyped and tested very early on, to get them as polished and enjoyable as possible. This involved a lot of playtesting. For the higher level elements, like secret pick-ups, we opted for a more organic approach to testing those – we just didn’t tell anyone! It was really beneficial to see if players were able to find those secret locations naturally rather than us telling them they existed. It helped us identify problematic areas and adjust accordingly. 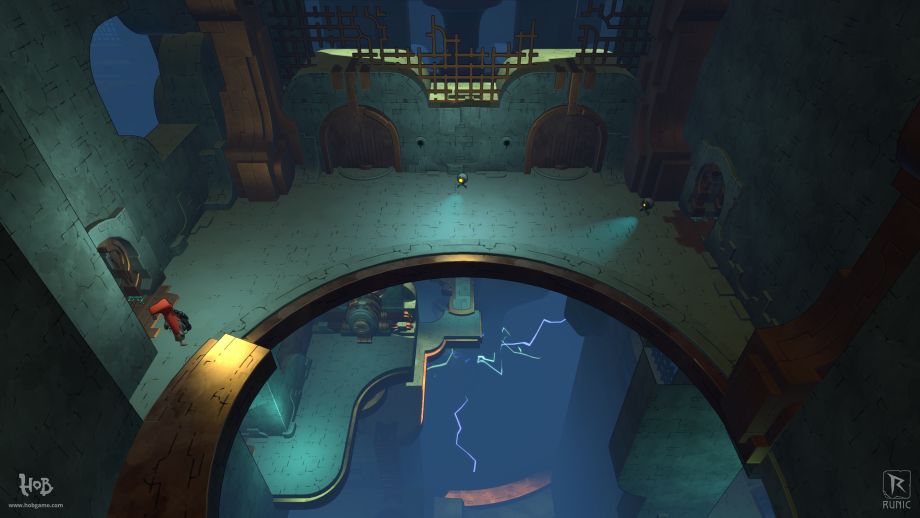 The world was built out of modular assets, so in some cases it was actually quicker to build a space using proper assets, than simple cube shapes. This made it easier for level design to visualize the final production. It also reduced the amount of time that environment art would have to spend ripping out placeholder content, opening up more time for them to polish and iterate on what was already there and make it look even better. 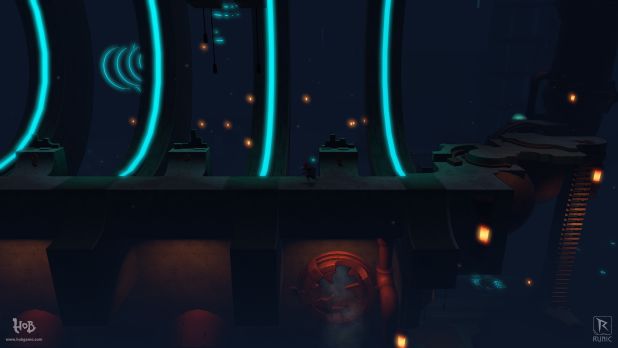 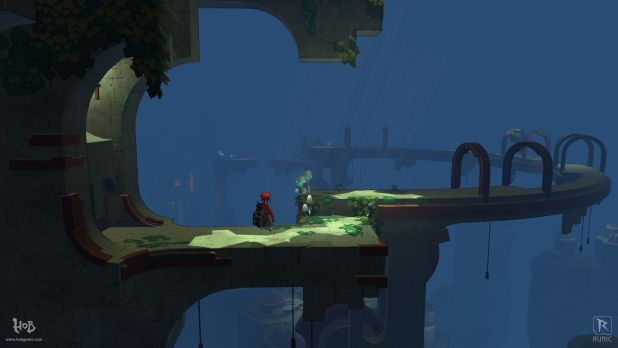 Do some research and planning before you start building anything. Try to visualize the overall look and feel of the space first. It doesn’t have to be concept art; it can be as simple as photo references. I tend to find inspiration in the world around me, every day. When it comes time to build, don’t be afraid to make mistakes – nobody gets it right on the first try. It is never about getting it right from the get-go, it is more important to learn how to identify what is missing in the experience and how you can remedy it. Test early, test often and test with people who are unfamiliar with the genre, on top of those who are. They might not be your target players, but their different perspective can offer insight into many difficult problems you are trying to solve as a designer.