Hello, I am Sakari Hakkarainen, a 3D artist from Finland. I've worked in the Finnish 3D animation industry in various roles for around 14 years. I've worked on three 3D feature animations that were among the first animated films made in Finland, and hundreds of TV commercials and visualizations. For a long time, I worked as a 3D generalist, also doing some compositing and TD work, before coming to work for Piñata in Helsinki. Nowadays, I do mostly 3D character modeling and TD work. At the moment, we handle a lot of video game marketing materials.

I got interested in 3D all the way back in 1995 when I saw the first Toy Story movie. I did 3D as a hobby and after high school, I got into another school where I did my assignments well enough for a teacher to recommend me to the biggest 3D studio in Finland at the time.

Because my job got more focused on character work at Piñata, and we wanted to move our character pipeline to Maya from 3ds Max, it felt like a good idea to enroll in a course on rigging in Maya. It had been quite many years since I had done rigging in Maya, so I needed a refresher!

Jose’s course for facial rigging at CGMA seemed like a great opportunity to get back into the game since for me faces seemed the most complex area to tackle, and character expressions are very important in all kinds of situations.

When I was thinking about what kind of face I'd like to rig, I wanted to go away from the usual pretty girls and such, and get a more expressive masculine face, so I ended up with an idea of an old-timey strongman. I threw ideas to my colleagues and got some ideas back from them; my colleague Veikka Somerma made the concept on which I based my design. 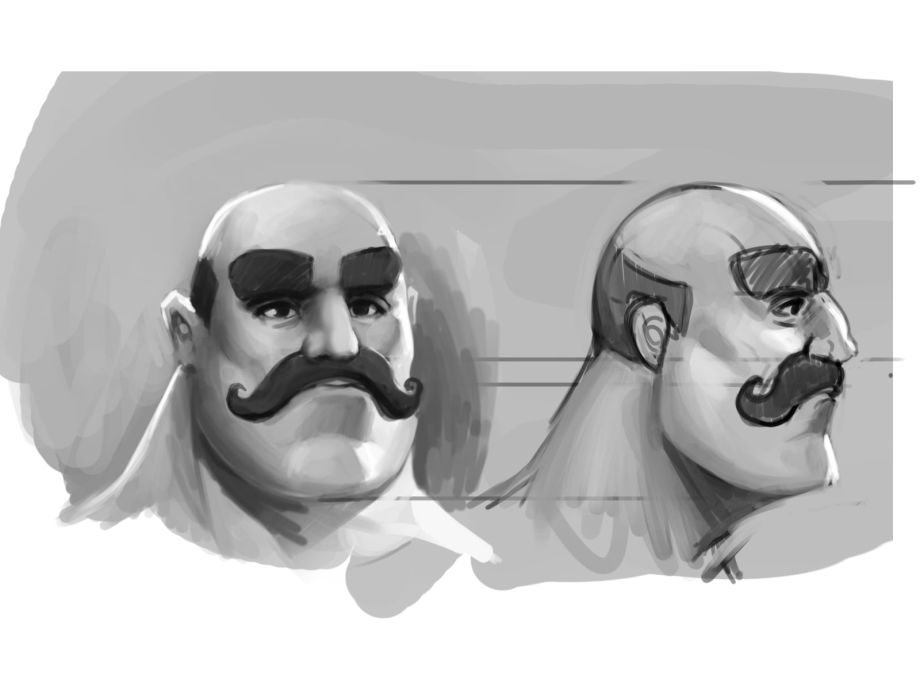 As for the style, I’ve always been more interested in stylized characters and styles in 3D since I’ve kind of found them more emotionally expressive and interesting than just trying to copy real life digitally. It also gives more room for artistic expression.

For modeling, I use ZBrush since sculpting frees you from the limits that topology can set. I’ve taken a few courses on human anatomy from Scott Eaton and I keep the things I’ve learned there in mind. Thinking of the skeletal structure, finding the spots where the skull would be prominent, and checking proportions is usually the first thing I do. I have some anatomy figures and a mirror on my desk to check stuff constantly. Using a mirror and looking at a moving face can sometimes be way more effective than just using static images or models. 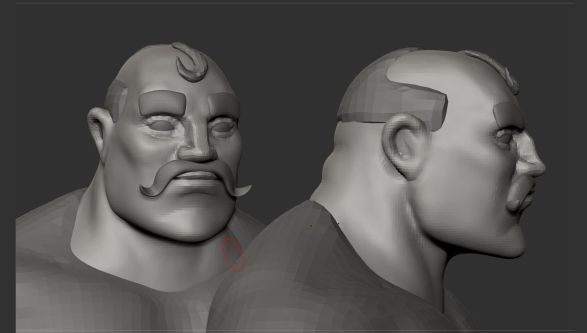 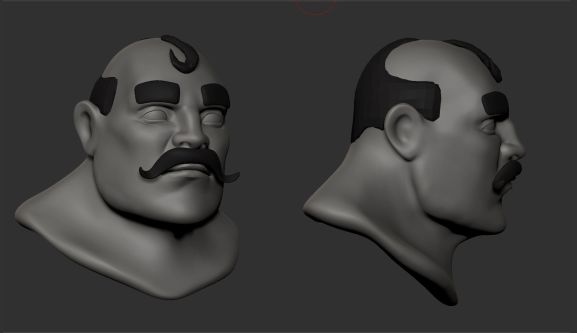 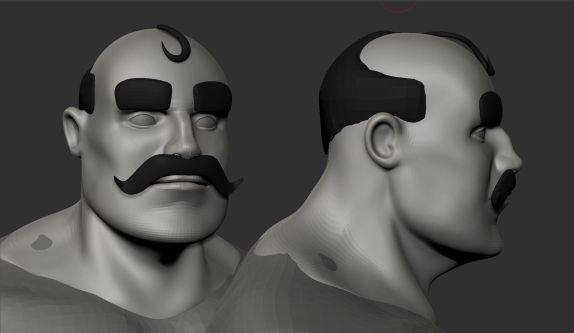 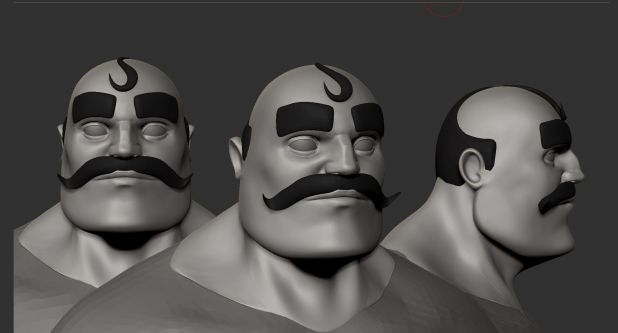 I kept textures quite nonexistent or simple since the main goal was the rigging. Adding color variations in the texture is something that makes faces seem more interesting in my opinion: even adding wilder colors like green and purple works very nicely and makes the skin feel more alive. I usually start texturing faces in ZBrush while sculpting, and then move to Photoshop and Substance Painter.

The face moves a lot when doing any kind of expression. For a smile, for example, it is not enough to have just the mouth move. Eyes and cheeks move as well. So to understand how to animate certain expressions, you need to study them and understand them. As a rigger, you need to be able to cut the expressions into smaller pieces and create a rig that is intuitive for the animator to use, without making it unnecessarily complex.

The best reference is always a mirror. Images and videos are good, but nothing beats a real face, since you can see and feel what is moving and when. With a good knowledge of the most visible muscles in the face, it doesn’t matter if you look nothing like the character you are rigging, you just need to understand why certain parts move with others.

To get all the expressions, there are multiple ways to achieve the same end result, and depending on the project, different techniques might be better. You can use only joints, only blendshapes, or combine both of them and other techniques to get what you need. This project uses mainly blendshapes, with some joints for certain movements that needed nonlinear movement, such as lip curl, jaw, and the eyelids. Blendshapes help to create more organic shapes, such as wrinkles and forms that have a change in volume when moving like the cheeks. Joints help to create rotating movement such as the jaw opening. Often you also use blendshapes to correct forms moving with joints, such as the mouth shape when the jaw is opening. 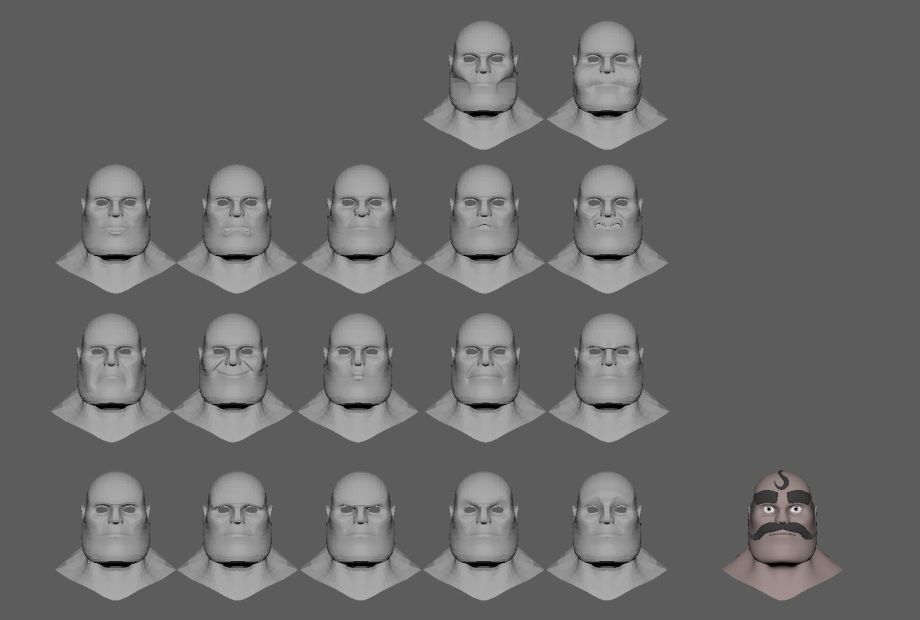 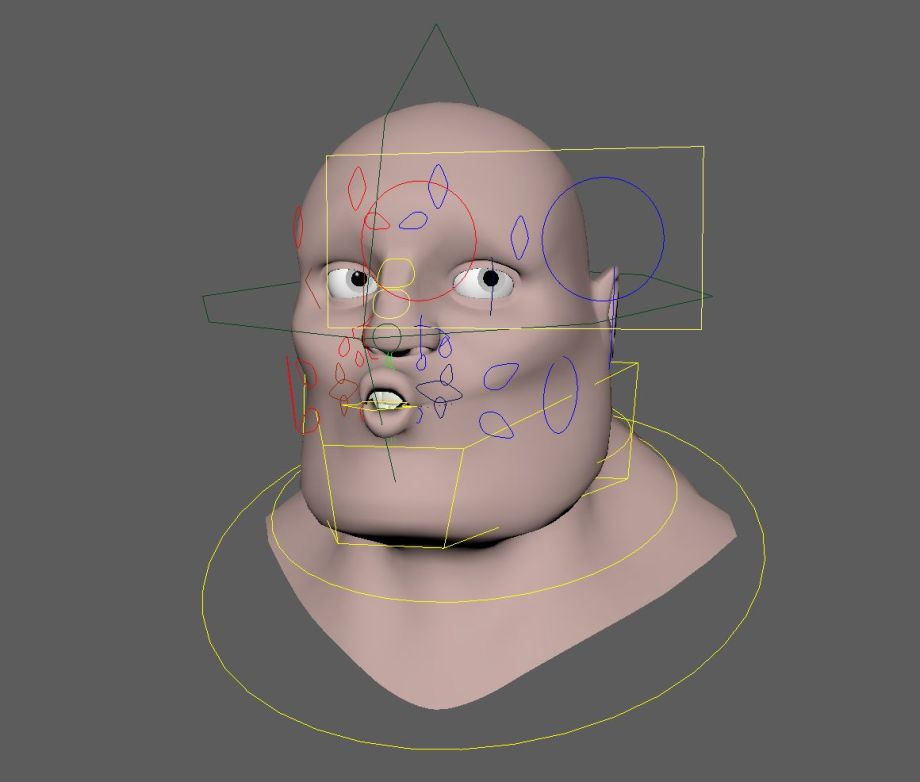 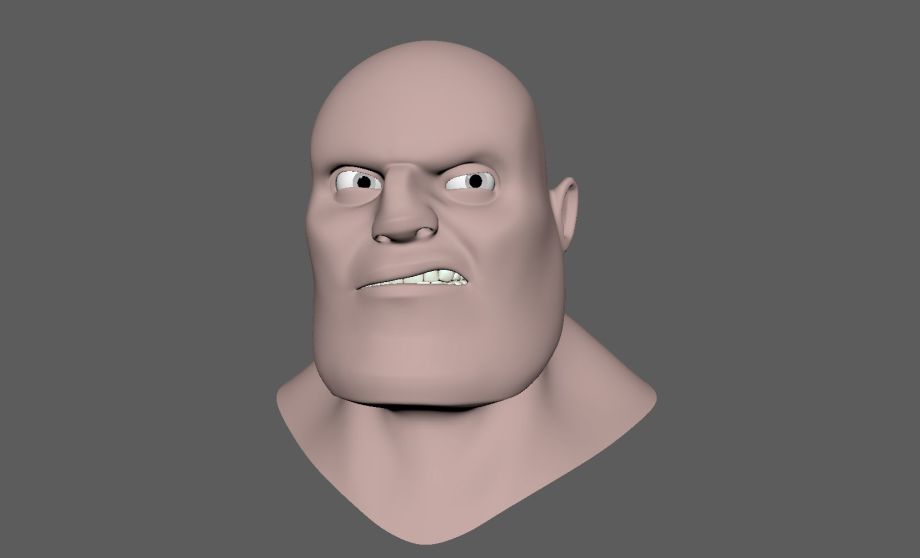 The hair strand and mustache were rigged to use dynamics in Maya so that the animator wouldn’t have to add secondary bounces and such while animating. In the end though, when I gave the rig for our animator to test and do a little summer greetings animation, he actually wanted all the dynamics off. So it’s good to ask your animator if they actually want the help with dynamics, or want to keep the controls all to themselves! 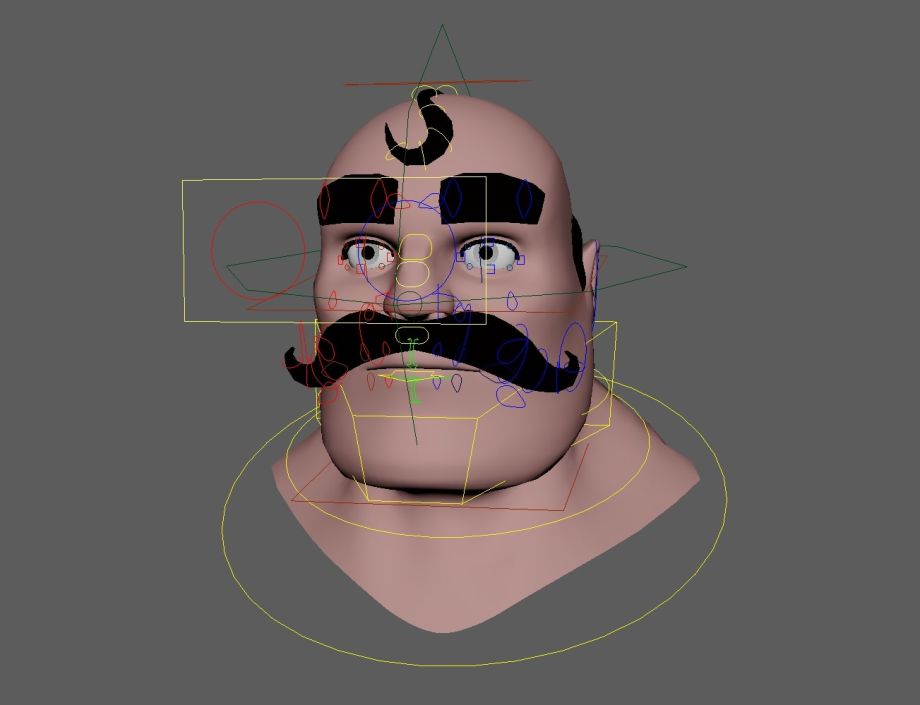 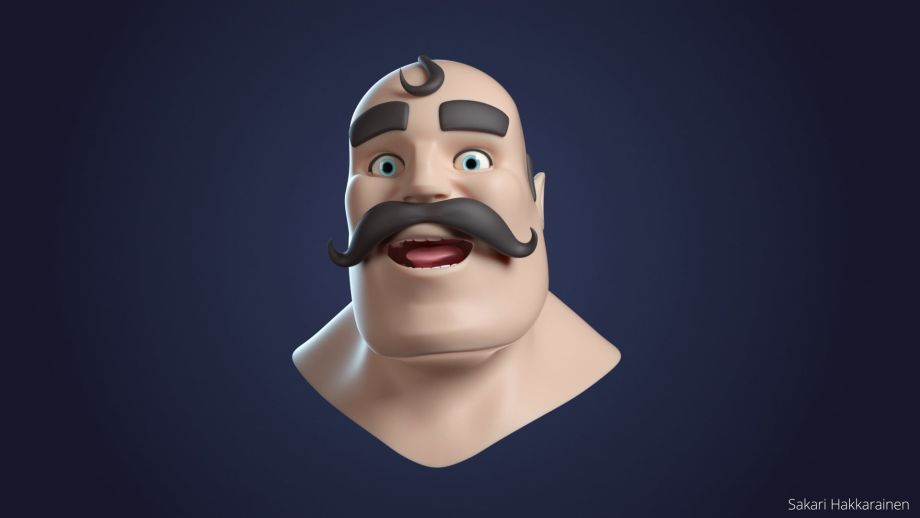 For the final work in the course, we did a small animation to test different expressions on the rig, and to see what should be adjusted. It is a good idea to test the rig all the time, even though you aren’t the animator because you need to understand and see how all the controls and blendshapes work together. It is also a good idea to give the rig to an animator to test because there are a lot of things that make sense best from the perspective of the animators.

We also did a short summer greetings video at work where our studio animator Jani Toikka took the rig for a spin. The idea, art direction, and flowers were done by Jonna Uhrman and rendering by Felipe Peña Karvonen.

The hardest part of this project, or rigging in general, is the point where everything is coming together. The rig has to work well for the animation to work, and achieving the balance can be tricky. Sometimes you just have to go back and fix things you did ages ago, but so it goes.

The course gave me a good understanding of the principles of facial rigging, and although I create my rigs a bit differently now, it made me understand the possibilities of different techniques on different parts of the rig. I do recommend it for anyone needing to do facial rigs, and for those who are not quite sure what the best way to achieve what they are looking for would be.

I’m tackling the rigging pipeline at our studio and I’m the only rigger, so I have free hands, but also a lot of responsibility. I have studied data-centric rigging and mGear lately, and it seems very powerful when you need to create rigs quickly for different types of characters, though it takes some time to assemble it. I recommend any rigger not yet familiar with mGear to take a look at it. One of the great things about 3D animation in my opinion is the constant development of technology and possibilities they open to make things more flexible and interesting! You should never stop learning!