Christopher Ward did a little breakdown of his UE4 environment 80s Sci-Fi Fan's Work Office full of props and talked about the challenges.

Initial Approach to the Scene

I started working on 80s Sci-Fi Fan's Work Office with the intention to create a fully propped out and story-driven room because previously I had mainly developed a bunch of corridor-like scenes lacking props and other interesting elements. I began gathering references and other bits of inspiration using PureRef, which is an awesome and free software that allows for easy collection and organization of a ton of reference images!

Initial Approach to the Scene

I started working on 80s Sci-Fi Fan's Work Office with the intention to create a fully propped out and story-driven room because previously I had mainly developed a bunch of corridor-like scenes lacking props and other interesting elements. I began gathering references and other bits of inspiration using PureRef, which is an awesome and free software that allows for easy collection and organization of a ton of reference images! 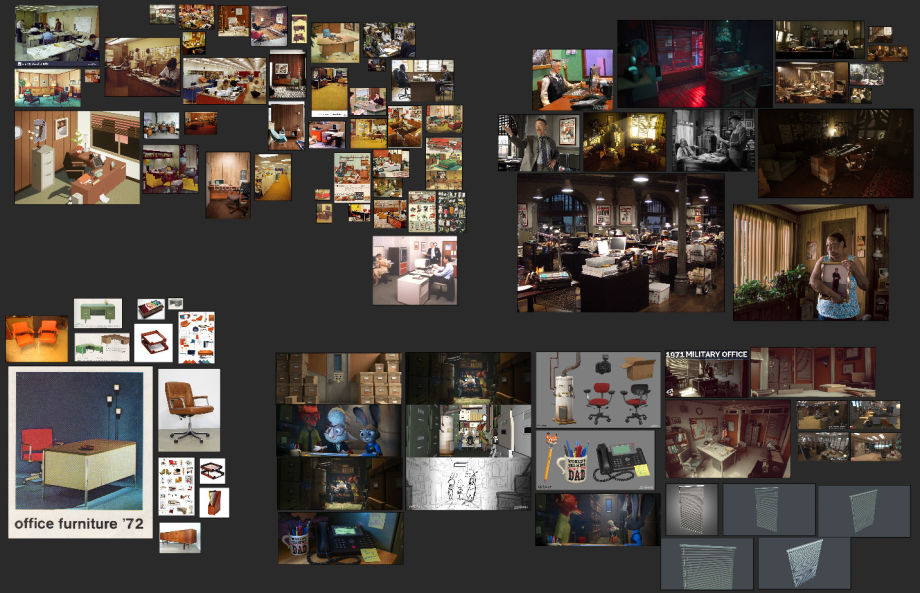 Clinton Crumpler’s project Saigon 1971, in particular, was a piece I absolutely fell in love with! Its soft lighting and color scheme definitely nailed the atmosphere and I aimed to produce a similar result. 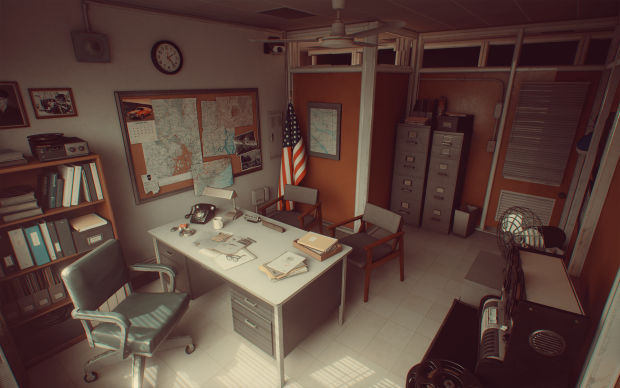 With my references sorted, I began a basic Graybox using mainly BSP brushes at first and experimenting around with different compositions and camera angles. Then I fleshed these compositions out with a custom, higher poly Graybox kit quickly put together in Blender, starting with the larger elements first. Often though my references focused too much on the composition, so I’d definitely recommend thoroughly breaking down your references, separating out large architectural, detail and lighting elements, for example, then tackling them in small bite-size pieces!

With the sheer volume of props, I knew I had to make things as modular and reusable as possible. For example, each paper holder pile is a prefab using only one prop with varying sizes and angles, the same goes for the sheets of paper and folders! I’d definitely recommend getting as much use out of your assets as possible. With this in hindsight, I wished I’d focused more on the quality as opposed to quantity. I definitely bit off a lot more than I could chew and often found myself overwhelmed even with a seemingly simple scene.

Materials were super challenging. For the basic architectural elements such as walls, floors, and ceilings a simple tiling texture whipped up in Substance Designer and Painter was used. All the props within the scene were done using mainly Substance Painter with the addition of Photoshop for basic tweaks and such. One of my goals with this project was to gain more familiarity with Painter, and as I learned more and more in the process, I often found myself going back and quickly re-doing older stuff. Once imported into Unreal, each material had a basic Instanced Setup with the Master Material, allowing for quick tweaking of the roughness, metallic and specular maps.

With the larger assets in the scene such as the IBM Machine and Television, for example, I started out grabbing some basic references, preferably as high res as possible to get every detail. Then I hopped into Blender and cracked out some basic blockouts to try and nail down the shapes of each prop. The IBM Machine, in particular, proved pretty challenging. With the basic blockouts done I simply began to iterate and iterate on each one, adding as much detail as I can within a decent time period. Along with this process, the UV setup is pretty simple, Blender's Smart Unwrap is hugely helpful for cutting the time down on this front.

Then, I hopped back into Substance Painter! With the IBM Machine, for example, I started out with a basic fill color (in this case, a basic black for the front plate and a basic creamy white for the rest) with a fairly high roughness value. Then, I often add a variation of that base color on top with super basic dirt or noise mask on top of that. Then, I add in a basic detail layer for larger details such as the disk drive, buttons, and keys. Additionally, I fill this in with another basic dust layer to add some more variation.

A major challenge here was again scope as I often had to pick which assets to spend the majority of my time on.

Looking at my references, I knew I wanted to go for something similar to Clint’s Office, with the use of one large window as a light source. The ways you can go about doing this, however, vary greatly. Some people use a bunch of fill and invisible light sources to create the desired effect, others take a simple approach with the use of one main directional light. Given this was one of my first fully propped out scenes, I chose the latter using one main directional light with the indirect intensity and bounce lights ramped up to fill the room. In addition, I set the Static Lighting level under Lightmass to 0.1 and Indirect Lighting Quality to 8 for the final build and 2-4ish for Preview builds.

With a simple lighting setup in place, Post-Processing proved to be massively helpful. Simply playing around with the post-process volume and creating many variations of the same scene was super fun and interesting. White balance and the options under Film, in particular, can massively change the look and feel of your scene. Along with this, I made heavy use of Global Illumination and a super basic Lookup table done through playing around with the Levels & Colours in Photoshop, really trying to bring out that washed out 80s tone.

There were a bunch of challenges, most of which involved issues with motivation and staying consistent. One major thing I learned and definitely recommend anyone to do is to simply share your work and get as many eyes on it as possible. I was super intimidated by Polycount at first, but then I realized everyone is there to help and the feedback you get from there is invaluable! As I mentioned earlier, the sheer volume of assets needed was a challenge, too and I underestimated the time needed for the project. I would certainly suggest keeping things small or breaking them down to tackle each issue in turn to avoid being overwhelmed. Lastly, in hindsight, I wished I was much smarter in the way I approached the overall scene: using super basic stuff such as Trim sheets and Modular kits would’ve been invaluable and cut down on a bunch of time!