Harry Biggs and Kieran Young kindly shared with us the details behind their medieval VR museum experience Fiefdom.

Harry Biggs and Kieran Young kindly shared with us the details behind their medieval VR museum experience Fiefdom. 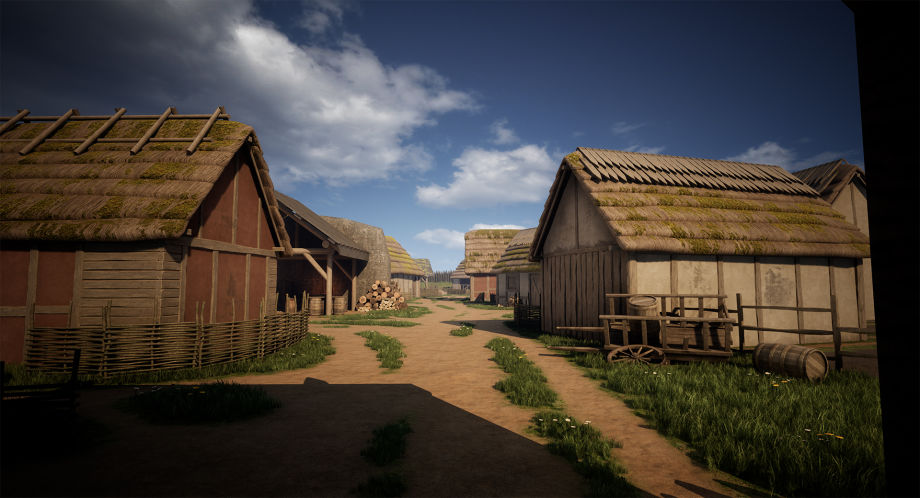 Fiefdom is a VR museum experience that is set in a medieval motte and bailey castle. While we tried to stick to historical accuracy, we did take some liberties with certain aspects.

Two major influences on our project were the game Kingdom Come: Deliverance and Mountfitchet castle which we visited and where we took a lot of reference photographs for the project. 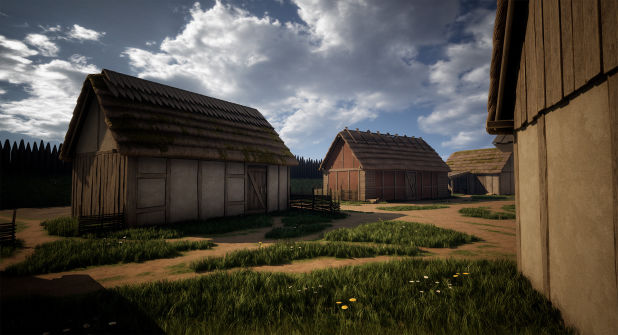 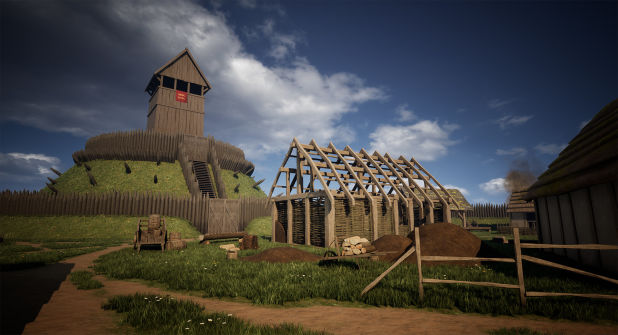 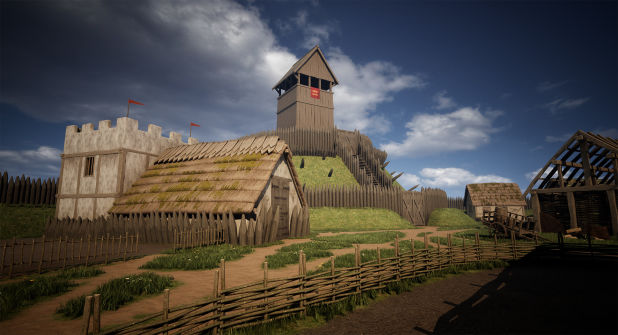 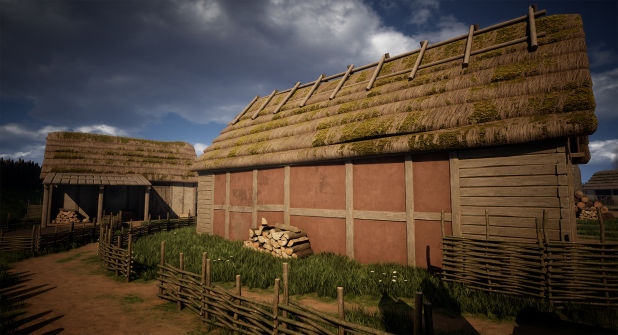 We came into the project with very little idea of what we wanted the layout to be. In the first week, we bashed out a few basic models of buildings contained in a palisade shape. A lot of the visualizations of motte and bailey castles we found online had a very round palisade, so we decided to slightly variate the shape as to make the village more interesting.

Results from the first week of work

We placed the buildings trying to create areas that were large enough for carts to go through and had good lines of sight to guide the player through the village. It was a delicate balance of trying to make the village feel full but not too cramped. We also left areas around the side of buildings to leave space for herb and vegetable gardens as well as space for animals to reside.

At the start of the project, we created a 60+ Google Slides document of various images of buildings, props, and textures that we thought would be good for our project. This gave us a good guideline of what we wanted to produce for our project in addition to giving us new ideas.

A selection of pictures we took at Mountfitchet

We visited Mountfitchet castle as it was not far from the University of Hertfordshire. While we were not able to implement all the ideas it gave us, it helped our project development and made us rethink some aspects of what we had done.

Secondhand references can be very valuable. However, being there in person gave us a sense of scale and detail that is not achieved by looking at images online.

The buildings were one of the first things we worked on in Fiefdom, as they were such an important part of the landscape. We started by analyzing existing real-life structures, looking at how they were assembled, what techniques had been used to create the materials etc. Most of the buildings were created based on existing structures, and this allowed us to ensure that our buildings looked structurally sound and authentic.

We initially created a Blockout building that we used for testing materials and techniques. We created props for the windows and doors early on as these were a big part of the buildings’ appearance.

We quickly realized that tiling textures and low poly geometry weren’t going to be enough to achieve the hand-crafted look of beams from this period.

We settled on using a set of sculpted/baked down beams to construct the buildings. This had issues due to the variety of different size buildings, so we added an additional set to get more flexibility. This technique worked well for the project as it allowed us to have a lot of hand-sculpted detail, which created the look of hewed beams whilst keeping it optimized.

One of the main issues we encountered with this technique was stretching of the textures due to the varying lengths of some beams. We plan to alleviate this by combining baked normals with tiling textures and edge highlights controlled by a mask. We expect this should retain the sculpted look whilst giving us even wood grain across all the building pieces.

The roofs went through several iterations to get the feeling right. Initially the roof was a single mesh, with raised pieces to emulate the look of layered thatch, however, this didn’t work too well. We sorted this out by constructing the roofs out of individual layers, which were essentially just rounded cubes.

These worked well as it allowed flexibility in the scale of roofs and attracted good lighting and AO. Originally the straw material was a lot more saturated, but as the project progressed we tweaked this to be a paler color which fit in the surrounding colors of the environment. The final touch was adding the moss, this added some color variation across the roof and allowed us to add unique details to the different buildings.

A picture of the finished buildings (before decals)

We used Substance Designer to create the majority of the tileable textures in the project. Designer offered a greats degree of flexibility to make tweaks to your textures in a very short timeframe. This was important as many of our materials went through several iterations before we were happy with them.

The Substance Designer graph of the blacksmith wall

One thing that I believe is very important when making textures is a reference. Not only can it help you get a good grasp on how to create some of the shapes in the material, but it can also remind of subtle details that you would otherwise miss. 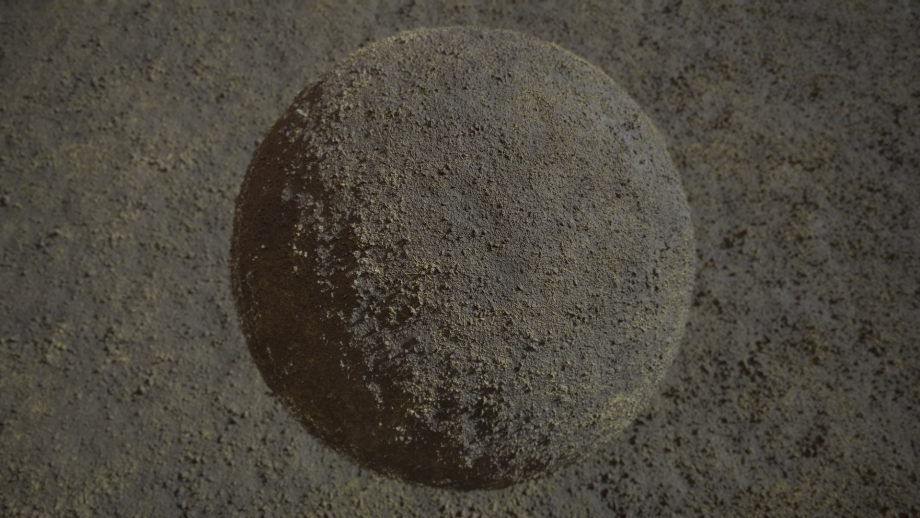 Research and mood boards played a large part in the development of our project. Although there were still changes we wanted to make that we could not make to the deadline we were proud with how the project turned out. Decals were especially helpful in breaking up tiling materials and add more visual interest to the buildings. 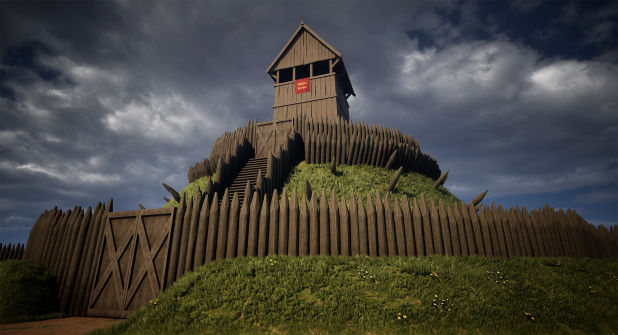 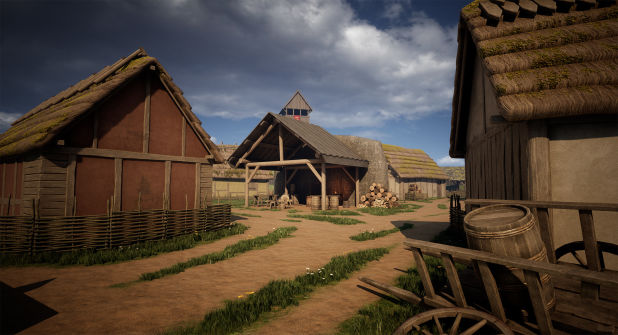