Kayla Lee talked about her small 3D diorama made in Maya, Substance Painter, and Marmoset Toolbag.

Hi there! My name is Kayla and I’m a 3D Game Artist in Vancouver, Canada. I currently work at VanArts as a Teaching Assistant for the Game Art and Design program. Meanwhile, I am working on more pieces for my portfolio as well as collaborating with indie gaming community projects.

I had learned the basics of CG during a high school course that introduced me to 3D animation and modelling and I have been hooked ever since. After high school, I immediately enrolled in VanArts for the Game Art and Design program which is where I work as TA now. It was an intense year of learning how to use tools such as ZBrush, Unreal Engine, and Substance Painter as well as basic 2D and 3D art techniques. The workflow was something we learned and experienced firsthand as we created levels and environments in Unreal Engine. 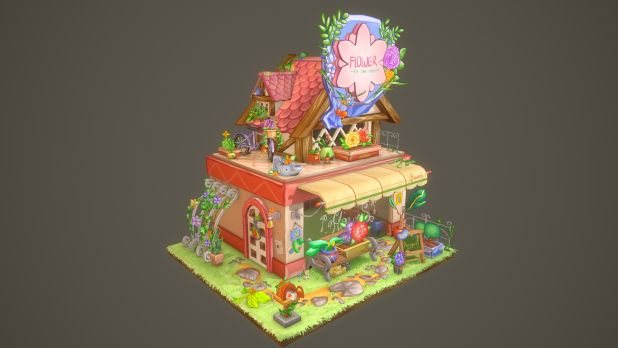 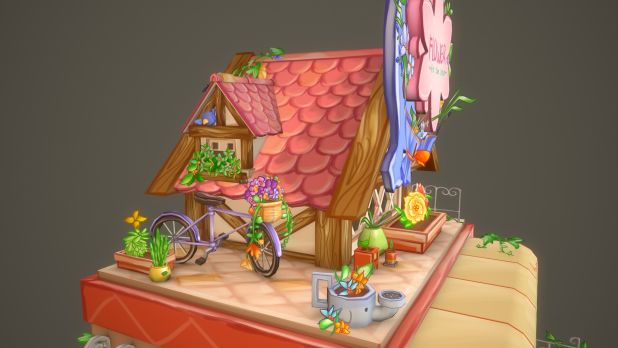 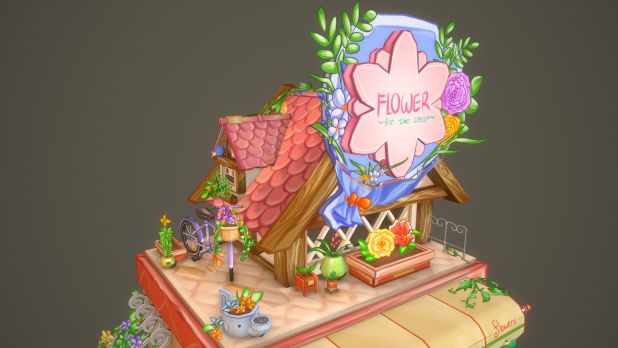 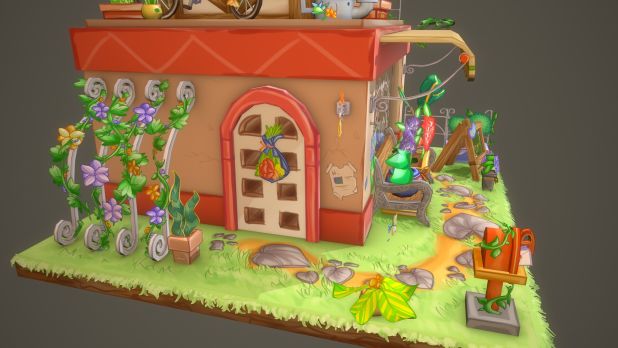 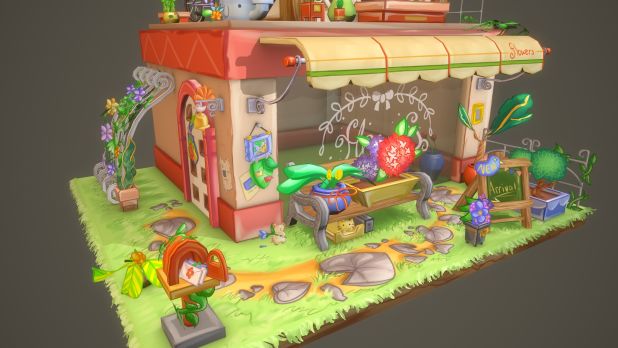 The project was a piece for my last term at school where we had to create 2-3 pieces of art for our demo reels such as character, environment, or concept art. Since I have painting experience and tend to play more stylized games, I decided to create a low-poly stylized piece. The project took 3 weeks to complete. The concept belongs to EK Um:

The concept had a lot of flowers and foliage that I knew could be created with alpha cards (made in Photoshop) as well as modelled pieces. So, I drew up what flowers were to be on what texture and colour-coded them.

The artwork also has very bright and saturated colours which I wanted to bring to 3D making sure not to lose the vibrance of the original art. So instead of letting the lighting in the environment do all the job, I decided to paint in the colour highlights and shadows which gave the scene a more stylized feel.

I imagine this piece to be a part of a mobile game with a quaint town where you can customize a house and build facilities similar to Animal Crossing.

I began by blocking out the scene in Maya. As the piece is relatively low poly in the first place, I didn't change too many things from that blockout. I planned in advance which parts of the piece were to be painted straight into the texture and which ones I wanted to model such as posters on the wall or the shingles on the roof. As this was imagined to be a low poly mobile game, I tried to optimize as much as possible. After all the blockout was done, I added curves and edges to props if needed, like with the bike and the awning. I had to make sure not to overdo the polygons or the scene would start losing its cohesive low poly style.

I also made mockup alpha cards and placed every card in advance so that I could use the UVs made from them as a guideline when I properly lined and coloured in the textures. 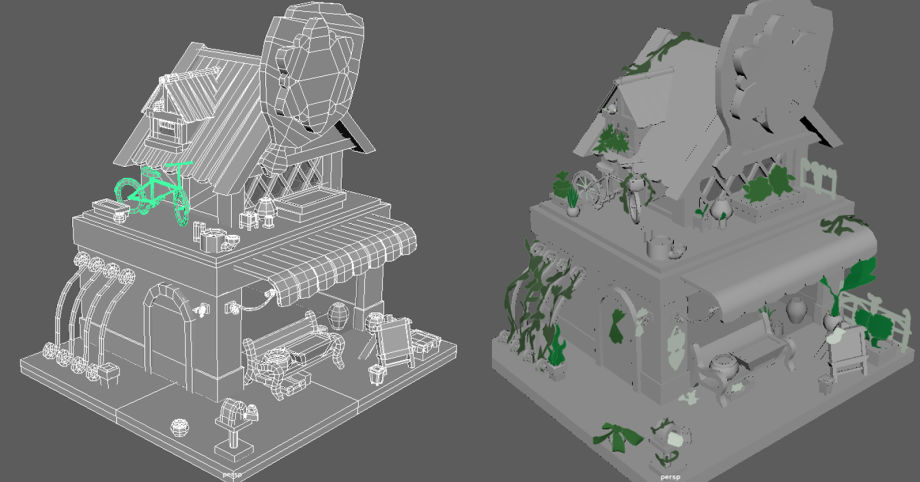 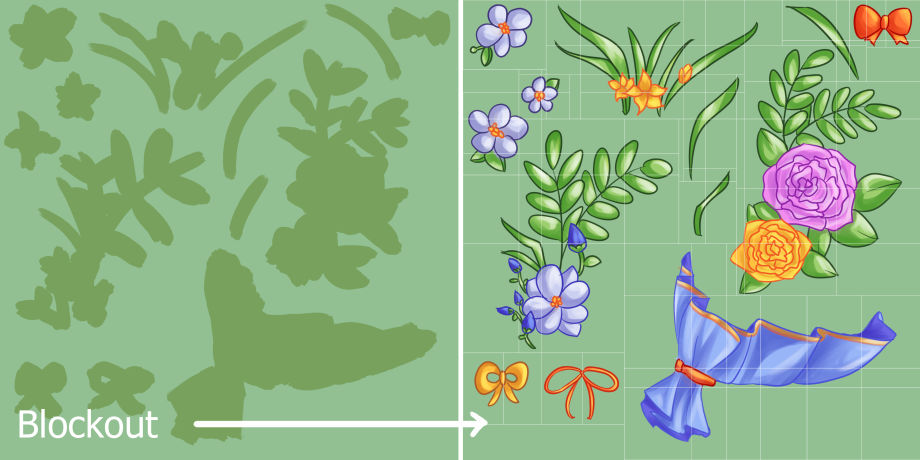 After modeling, I went back and cleaned up faces that would never be seen or used in the UV space and kept on the lookout for ngons that could mess up the UVs or polygon flow. I also kept in mind the repetitive shapes that could have UVs stacked like the ivy vine structures or wood patterns.

I used Substance Painter mainly as a blockout tool for my modelled UV pieces. It helped me get an idea of where the camera would be as well as I could already add shadows into the texture. Certain faces would almost always be facing away from the camera and those were the faces I could colour in.

I also used Substance Painter as an ambient occlusion baker for this project. AO is very important in painted textures because it helps establish that the piece is in 3D by breaking up shapes. I then used the AO maps and overlaid them over my textures to create more lighting. 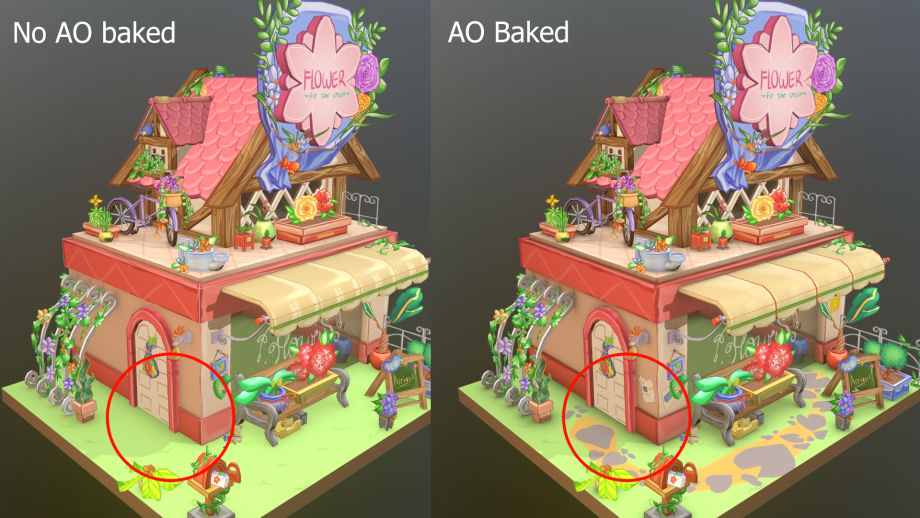 For the details such as the rocks and the roof, in order to optimize the piece and showcase my painting abilities, I decided to paint in the perspective instead of modelling them out. Substance Painter helped me with envisioning the perspective as I could paint on the main blockout and add some touches in Photoshop.

The details in the scene such as flowers and vines are alpha cards that I had organized and prepared in advance. EK Um did a great job at creating a scene full of colour and life, and I wanted to make sure I replicated that perfectly.

By analyzing the concept art closely I was able to bring in smaller details such as the bird on the window sill or the hamster holding a lilac which I think adds to the mood of the piece. 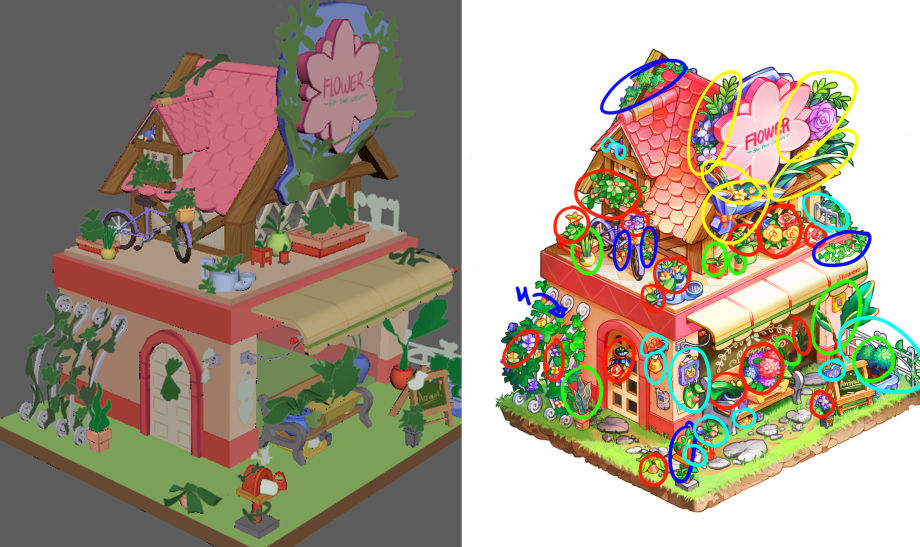 At this stage, I had to make sure the scene was lit but the shadows and lighting were not overpowered as well as did not clash with the lighting painted in. I rendered the project in Marmoset Toolbag and referred to the concept art to check my saturation levels and values. Spotlights were placed in a triangle formation surrounding the piece so that each angle was given appropriate light. All the shadows in the scene are either turned off or toned in order to show the lighting already added in the texture. 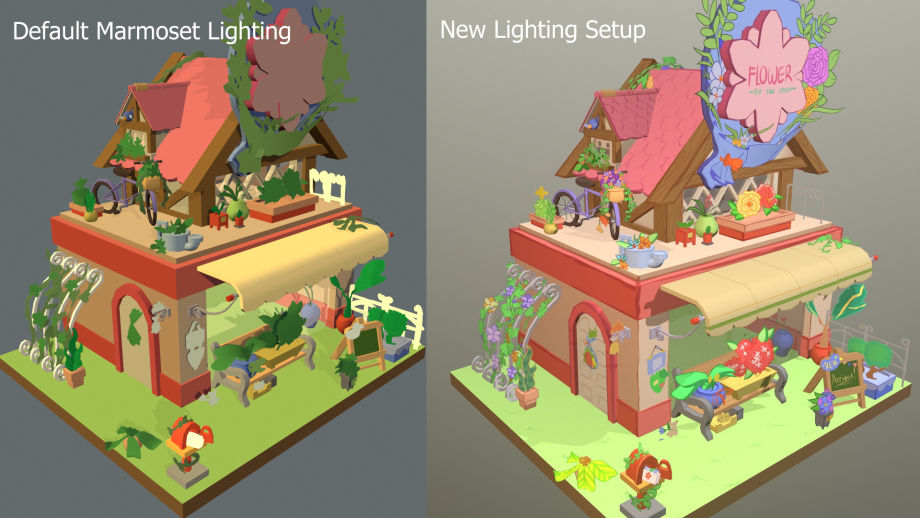 I turned off all the shader settings except for the texture and lambert settings as there was no PBR texture set. The glass was done with dither settings to keep the design and make it see-through at the same time. 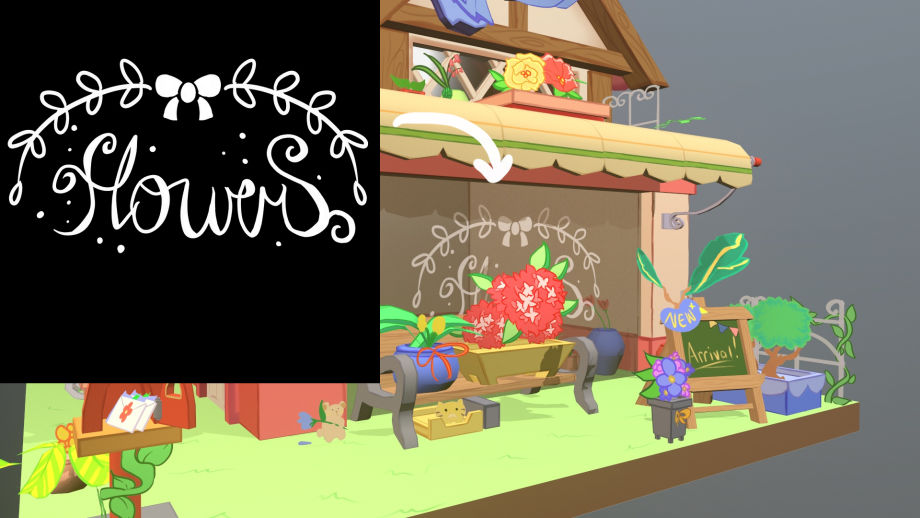 A time constraint and a certain benchmark of quality were among the challenges I had set for myself when I began this project. Since the scene was my first hand-painted project I had done in 3D, I wasn’t entirely sure about the workflow or tools I would need to use.

I am very thankful for the support from my teachers and for the references and lessons they gave me that I could refer to. Having the time element really pushed me to stay organized and helped me evaluate the timelines of my future projects as well.

I have also uploaded an in-depth video about this project on YouTube (see below), check it out for more tips!