Niko Gesell explained the way he worked on the visual style, colors, textures, and final setup in Sketchfab for his stylized hand-painted Throne of Stormwind taken from the World of Warcraft lore.

Hi! My name is Niko Gesell and I am a Prop and Environment Artist specializing in stylized artwork.

I am a Media-Design student from Trier, Germany, but besides that, I work as a freelance artist for all kinds of games! I started doing 3D about 6 years ago when my brother introduced me to stylized artwork through his product design. Quickly realizing that 3D can be very well combined with my passion for games and movies I started doing a lot of art in that field.

My most recent project is a fan-rework of the Throne of Stormwind from World of Warcraft. 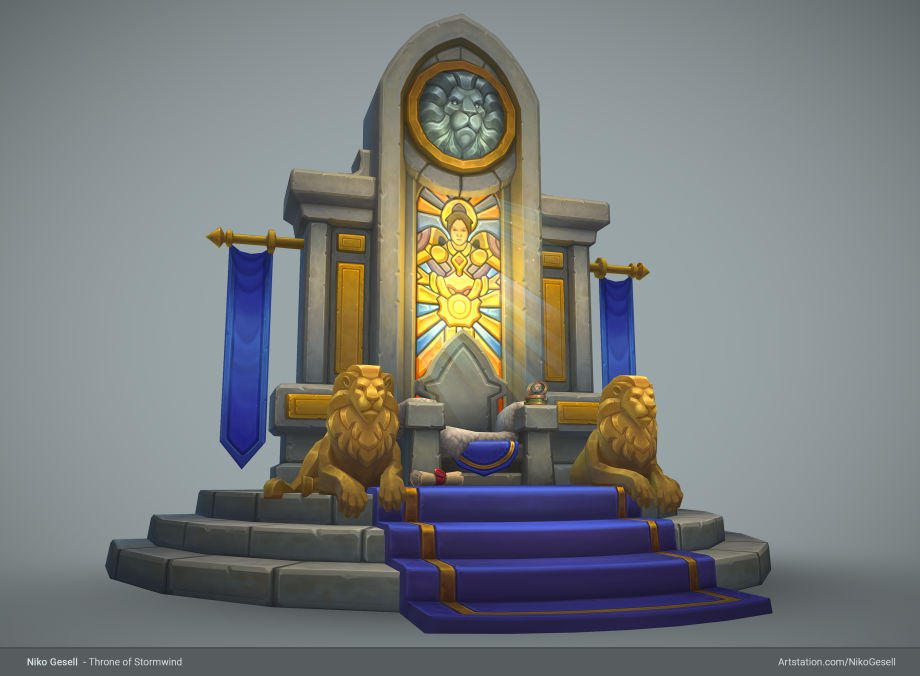 Throne of Stormwind: About the Project

I have always wanted to create a visual rework for one of my favorite games. When I came around this throne in World of Warcraft I immediately had 3-4 ideas that I would have loved to see implemented.

My goal was to redesign the throne without losing what made it so memorable for the players. In addition to that, I wanted to introduce more storytelling to the piece, since it was made 15 years ago.

My first step was to acquire as much information as I could about the Alliance, who they are, what's important to them, and the history of their culture. I wrote down symbols, colors, objects, and shapes to help define them and unify the theme of their culture.

The Alliance is all about the portrayal of power and order, which you can see in nearly all of their architecture and armory.

Those are taken directly from World of Warcraft as reference:

When working on projects, it's important to get as much reference as you can, because it can come in handy at various points in the production and also help you overcome roadblocks. To start, I use reference to explore different ideas and see in which direction I could go with the project. The longer I work on the project, the more specific my reference becomes. It is completely fine if the reference use changes along the way, as long as it helps you stay true to the theme and ideas of the piece.

Once I had enough references gathered, I started with sketches of the silhouette.

The silhouette of an object should give you a clear read about its function and what the object is. For a throne, the two most identifiable parts are the back of the chair and the armrests.

After about 15 silhouette sketches I picked the best few and started overpainting the theme. I use lineart over my silhouettes but anything that delivers the idea of the concept is a viable option here. Also, don't be afraid to jump between the steps and adjust the silhouette further. 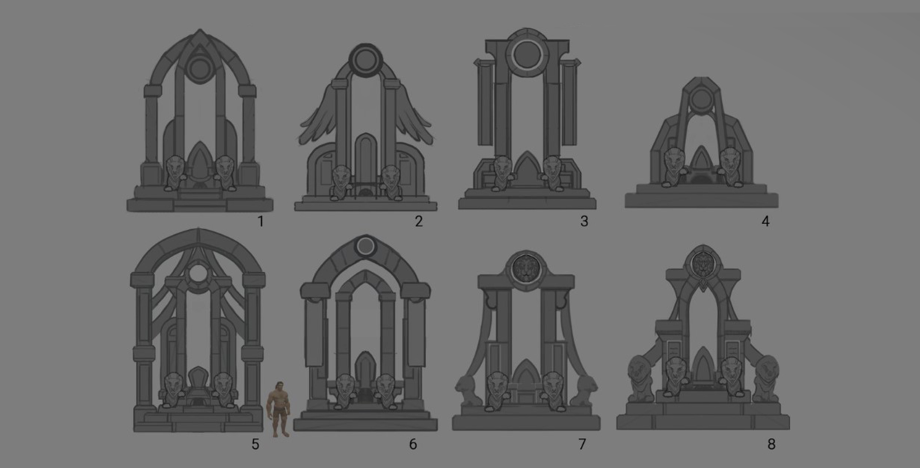 While concepting, make sure you have a sense of scale. Try putting a screenshot of a character from the game besides the design, to give you further assistance in getting the proportions right.

The next step was to pick out a color palette that would fit the throne. In my case, it was quite easy since I could rely on the palette from the original throne. Nonetheless, I want to get in-depth on how I pick my colors for a project.

I work with very highly contrasted and saturated colors which are balanced out by areas of visual rest. Those areas of rest are usually less saturated and allow the eye to wander to your next point of interest. The goal is to have a clear hierarchy on your accent and base colors.

World of Warcraft’s visual style has been developed and refined for over more than a decade now, so you will find a lot of older assets in the game. To live up to their current standards, I like to reference a lot of recent artwork from the game rather than older ones. When creating my concept art I tend to follow a few rough guidelines that help me get the style down:

Objects are often very scaled up and chunky​. I think this comes back to the perspective in which players play. The camera from which the player sees the world is often quite far up from the character in order to allow a lot of players and monsters to be seen without having a lot of noise visually. Therefore, everything must be a bit clearer and bigger!

The game has strong combinations of color and contrast ​to make a powerful visual impact.

Wear and Tear​. Pretty much everything in the game has a good amount of damage and dents. I think it just makes things more interesting to look at and helps to break up the big shapes interestingly. This guideline is rather specific but it had a huge impact on my artwork when I realized it.

I think an earlier project of mine shows the application of those principles with sized up elements, some rough edges and wear, mixed with strong contrasts of value and color (obviously, the game is big, not everything always applies, but this guideline helps!). 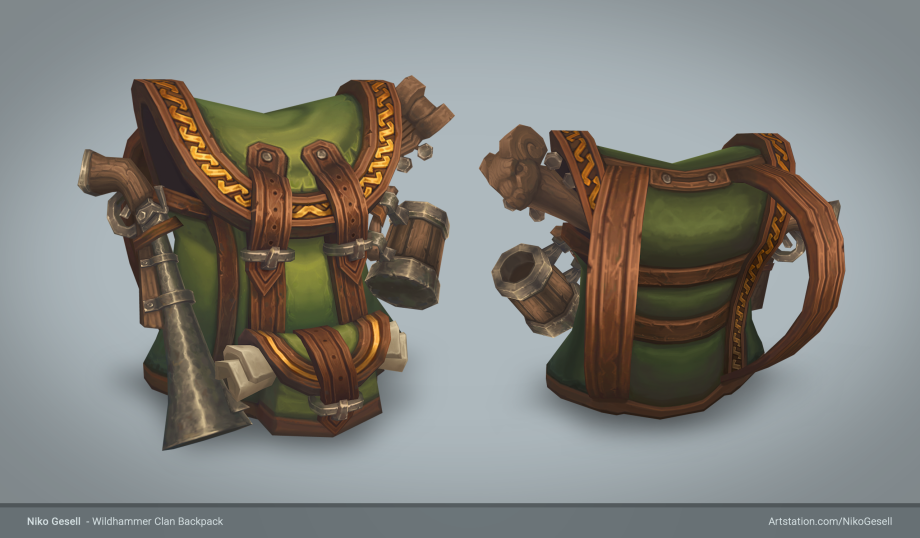 Modeling the Throne and Lions

I had to split up the projects into two parts, organic and structural. The lions sitting beside and on top of the throne were sculpted in ZBrush but the rest worked fine with Blender. The throne was made out almost of primitive shapes only and with the ​Mirror Tool​ from Blender, it was quickly done. If you have the chance I recommend planning objects symmetrical first and adding all the asymmetrical parts later consciously to break up the design and make it feel natural.

The lions went through a lot of iterations and challenged me the most since they were so far out of my comfort zone. I had to repose them a lot of times to deliver the right mood for the throne. This is a prime example of why you shouldn't go into a project without reference and that often you should not settle on your first iteration.

For this project, the sculpt served only as a tool to create a model to retopologize over. I think you can spend the extra time to get a clean bake out of it if you like to have a base to work from.

In case you are working with Blender or any similar modeling software I recommend getting the UV work done ​before​ mirroring everything. That way everything should overlap perfectly and you can avoid work and artifacts in your textures.

In addition to that, try to align your UV islands if they aren't organic by nature. There is even a nice way to do it quickly in Blender, just press spacebar or F3 and search for “Align”.

Most painters have a very different approach to their painting style. Mine revolves around a lot of big brushstrokes. That helps me to quickly block value in but can be very messy at first. Try to find what works best for you!

In this kind of painting, all the rules from traditional painting still apply. So don't hesitate to reference real life for inspiration on how to paint a material! When your object is supposed to be standing in a warm forest, do not forget to add some warmth in your sun-facing sites and some coolness from the blue sky in your shadows.

I am often disabling all other objects in my scene to bring each of them to a good individual level of quality. That way I can avoid jumping in between objects and wasting precious time. I also highly recommend painting a lot of your things in Photoshop, right on your texture sheet. You will get cleaner results that way and save more time. 3D Coat offers a good setup that allows you to you jump over to Photoshop and see your changes almost immediately on the model. It should be set in 3D Coat on “Ctrl+P”.

Setting Up Your Scene & VFX

I like to set up my scene in Sketchfab, but there are many great alternatives that can give you similar results.

Lighting can give you an extra opportunity to push your project further. I have two lights that are illuminating very dark shadows on the model and one light that simulates ambient light from the sky.

Sketchfab also offers a shadeless version if you just want to rely more on your texture work. I highly recommend looking into the emission maps, too! It is under the Materials Tab and can help you cancel out very dark shadows. Just set your base texture as the emission map and give it a relatively low value.

The visual effects in this piece were quite simple. I created a few long boxes and gave them a colorful texture that fades out. In Sketchfab, I recommend using the setting “additive” to really make your light-planes glow.

The same goes for the little particles that are floating in the air. Those are just planes with small white dots on their texture and the same “additive” effect.

When creating a project like this, the technical workflow only makes up only a small percentage of the whole work. Strong fundamental knowledge about light, shadows, composition, color, and design will make your pieces shine.​ So don't forget to study those fundamentals on a regular basis to up the quality of your work! And always have fun creating!

Please feel free to check out my past works on ​Artstation​ and ​Twitter​ since I am currently open to new opportunities!

Thank you for taking the time to check out my breakdown! Special thanks to Jordan Powers who guided me through my biggest project so far!