Check out a little breakdown from Sebastian Vomvas, where she showed the production of his atmospheric stylized 3d environment.

Hello, fellow 80 Level readers! I’m Sebastian Vomvas, an environment artist from Athens, Greece and a final year 3D Games Art & Design student at the University of Hertfordshire. I did one year’s internship at Rare, working on Sea of Thieves as a member of the Asset and Level Art teams. I love creating stylised art, but I have also worked on realistic projects in the past – most notably Divided Kingdom, our second-year university group project with Ben Macauley. This year, I’m back to stylised visuals with this solo project of mine, Athonite.

During my internship at Rare, I kept thinking about possible projects I could work on after my return to university – I definitely wanted to do something stylised, to put my newly acquired knowledge from Sea of Thieves to use. The idea for Athonite was shaped as a result of multiple sources of inspiration: the impressive location of Meteora, a geological formation of massive rocks in Greece, with monasteries built on top of them; Team ICO’s games and the breathtaking sense of scale conveyed by their environments; ‘walking simulator’ games, platformers and so on.

I intended Athonite to be a ‘creative sandbox’ of sorts, which I could use as a base on which to experiment with various techniques, gain new skills and test how much I could achieve on my own, while delivering something that is pretty to look at, playable in nature and with a story to tell. My main restriction was time, as I had to synchronize its production with university deadlines as well as I could.

With Athonite, the grandness of scale was one of the core aspects of the look and feel I was going for. I went about achieving it in the following ways:

The landscape was generated in an unorthodox manner: no actual landscape actors were used – instead, everything (including the faraway mountains) is low-poly geometry, sculpted in the same manner as every other asset. The ground is formed by the repetition of ‘cobbled stone’ meshes, with foliage on top of them to break them up. The rationale behind this decision was that the use of geometry creates silhouettes, rather than flat surfaces, at the edges of objects (e.g. the stone slabs at the edge of a cliff) and is in tune with the general art style. Moreover, most of the pathways I wanted to create were far too narrow for multiple thin strips of landscape actors. In the future, I would like to experiment with mixed approaches. 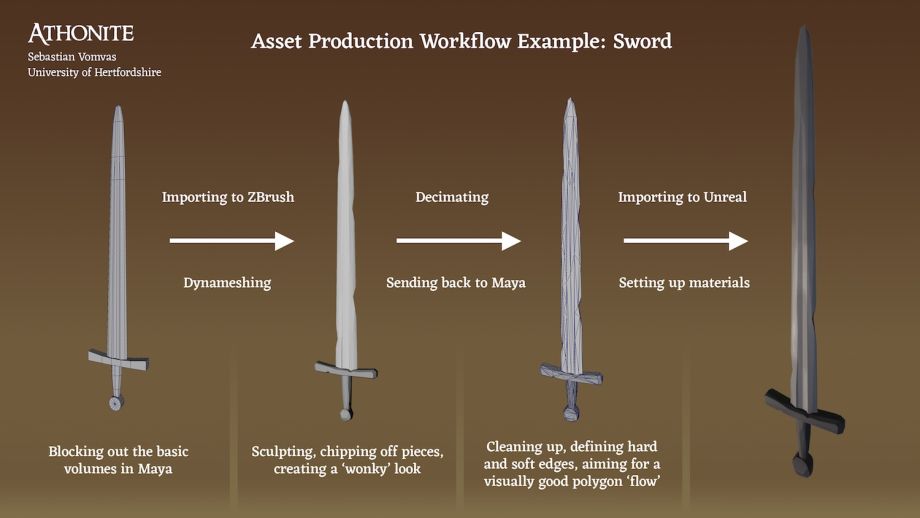 My goal was to produce a large number of assets in a limited amount of time, in an art style reminiscent of the ‘wonky’ and ‘painterly’ look of Sea of Thieves. After doing some art tests, I decided to pursue that through a ‘low-poly’, simplified art style, also drawing inspiration from The Witness. The lack of normal maps and baking in my workflow saved a lot of time as well as memory (in terms of game performance), while also making my work much more flexible and fun. 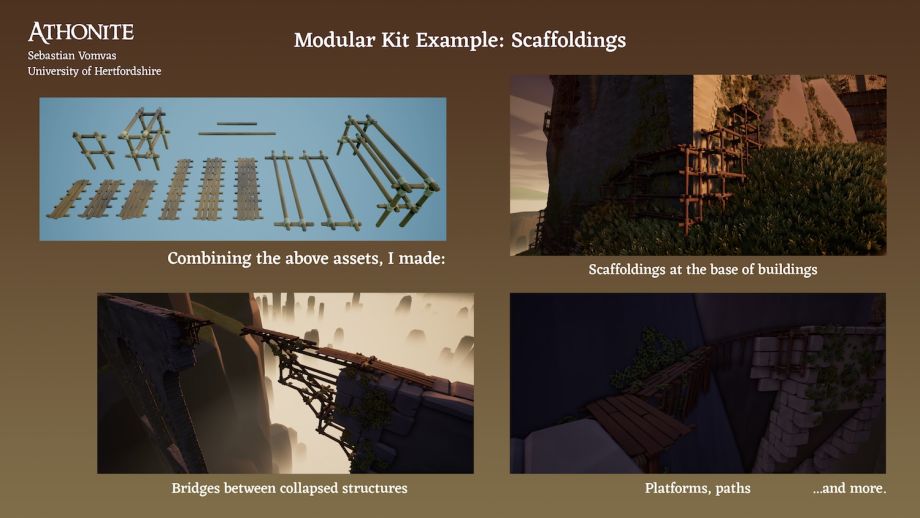 I blocked out the general volumes of every asset (or modular kit part, e.g. a wooden beam used in the balcony set) and exported an .obj to ZBrush. There, after using DynaMesh, I tried to achieve a ‘faceted’ surface look and a worn-out/ beveled look at the edges, with chipped-off pieces. Once I was happy with that, I decimated the sculpt (to a fairly low poly-count) and exported it back to Maya, where I cleaned up any spare vertices and manually set hard and soft edges, aiming for a smooth polygonal flow. On the large rocks, I also beveled the hard edges for a smoother look, because of their much larger scale compared to everything else. 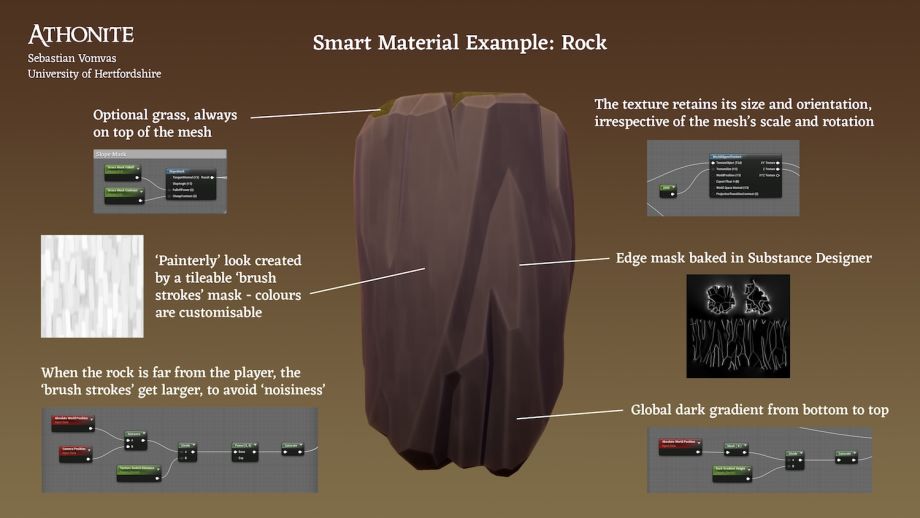 Most of these assets were not textured on an individual basis. My idea was that, in order to achieve a ‘painterly’ surface look, what you essentially need is a series of tileable ‘brush stroke’ masks of various shapes and forms, to be re-used on multiple assets and drive diffuse color and roughness. I created those textures in Substance Designer. Not all assets need them – some of them work just as well being monochromatic, particularly the smaller ones. The UE4 material editor provided me with a lot of ‘smart’ tools to maximize the flexibility I could get out of materials and create color variation in-engine, on a large scale. The rocks were also unique in that I baked curvature masks for them, making their edges slightly brighter.

The general world building was pretty straightforward. After doing some essential pre-production (including creating mood boards, getting some concept art input from Artur Zima and visiting Meteora myself), I started blocking out the level with basic primitives, likes cubes and cylinders. With the main game mechanics already in, I was able to constantly test the level and make large-scale changes to its layout, until I got a result that combined visually interesting compositions with good playability and flow. The level is divided into distinct areas: the introductory gorge before the main gate, the large bridge leading to the main rock, the stairs ascending to the monastery, the path on top of the roofs, the rope bridge and the final area with the beacon fire.

I wanted the lighting to convey a melancholic and somber mood, befitting of Athonite’s dark story. I took inspiration from two sources: Firewatch, with its expressive orange sunsets, and 300, with its sepia tones and high contrast. The lighting is dynamic, with an orange-sepia directional light and a purple-ish dim skylight with an HDRI map applied to it. The skybox was taken from UE4’s Stylized Rendering project and its colors were tweaked, while its panning cloud masks were also used on various cloud planes above and below the player’s eye level. With atmospheric fog, responsible for creating the haze, the trick was to balance it well so that it partly obscures the background while still retaining a good level of contrast, depending on the distance between camera and object. As for post-processing, it was mainly used to customize Ambient Occlusion and desaturate colors a bit.

Special thanks need to be given to Matthew Mainprize, who composed the epic score for Athonite’s trailer. Athonite is still work-in-progress, as I have at least one more month to keep working on it until its final university submission. I have a few more additions in mind, as well as elements to polish before I call the project done. However, I like the universe I have created with it, so it’s possible I’ll be revisiting it with another project in the future. Having learned so many lessons from working on Athonite, I am now eager to work on something else and create new epicness, preferably in the professional company of other artistic people!