Ted Mebratu did a breakdown on recreating a video scene for the Unreal Film Jam submission, shared his workflow in Unreal Engine and discussed his approach to using Quixel Megascans for vegetation.

Hi! My name is Ted Mebratu and I’m a lighting artist from Ethiopia, currently based in California. Since my last article on here, I've worked on many different projects of all kinds, including films, games, archviz, and currently, I am working as an associate lighting artist at Ready At Dawn Studios.

Gathering the References/ Looking for the Inspiration

The waiting place was a short UE4 film I worked on for the past month as an entry for the Unreal Film Jam. The concept was inspired by a line I read off in a doctor Seuss book while I was researching things I wanted to do for the competition. The book ( titled “Oh the Places You’ll Go”) describes the waiting place, which is used as an allegory to describe a place, where people who are in a state of stagnancy and a huge lack of motivation live. I wanted to take that theme and turn it into a physical world that felt eerie and oppressive while also modifying the story to fit the different narrative I wanted to tell. In the end, it became more of a visual representation of an escape from a dark place into a better one.

When thinking about the type of environment to best represent these themes, an ancient overgrown forest felt like a better choice to me. I wanted to experiment a bit with the architecture around the scene and do a lot of visual storytelling  since I didn’t have any characters or dialogue in the film I was going to have to use the environment and lighting to sell the narrative. 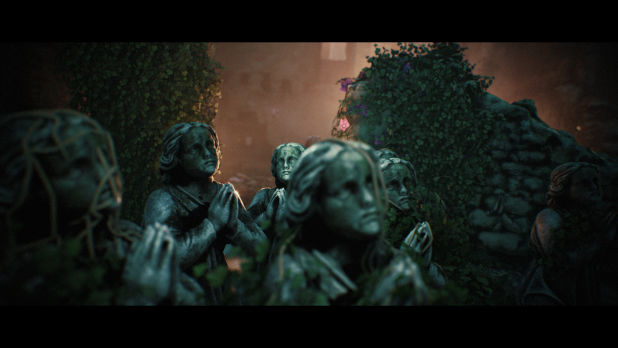 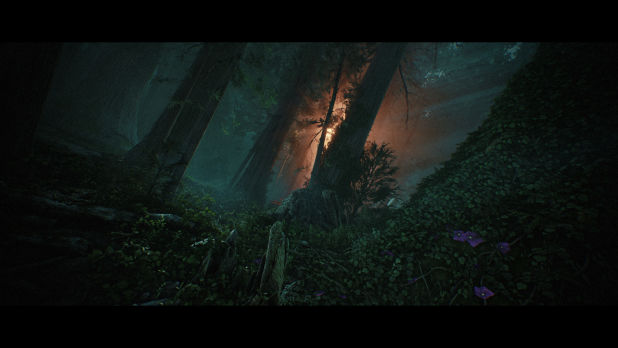 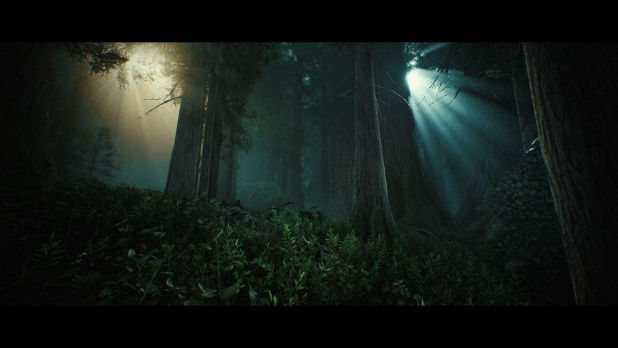 Working on the Structure of the Scene

I didn’t plan the cinematics much in the beginning, I was mainly focused on just having a good environment and lighting setup to start with. Luckily, I had a great redwood forest asset pack from Mawi United, which gave me a great base to start from and build everything up. Also doing one-shot take with just one camera meant I could add all the nice details only in areas where the camera would be flying through. This made building the environment and adding props/vegetation much easier and more efficient.

I scrapped most of the vegetation except the trees and replaced them with Megascans 3D plants. For the placement of all the smaller vegetation, I used Unreal’s procedural grass tool, which saved me a lot of time compared to just placing everything manually. For the large trees, I got rid of any that were in the path of the camera and started manually adding trees here and there to bring visual interest and also make the forest seem much denser than it actually is. 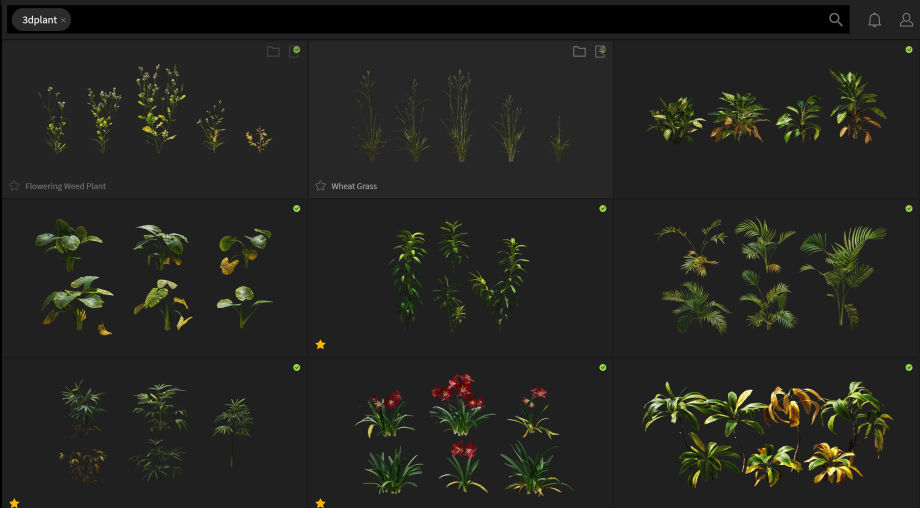 These are the main plants I used throughout the environment, with the red ones being the only ones I used for the second half

Due to the one-shot composition of the cinematic, I had to do a lot of manual tree placement around the entire level to give the forest that dense feeling. Once I had the general movement of the cinematic nailed down, I basically would replay the sequence over and over while pausing here and there to add/modify the geo and lighting, that’s the main workflow I used to flesh out the entire sequence. Anywhere else aside from the main path is practically devoid of much detail except for the procedural ground vegetation and the trees.

This is mostly what the rest of the environment not in the camera’s path looks like, I plugged small plants like clovers and some scarce bushes into the procedural grass system. The rest is hand-placed using the vegetation tool

Since this was going to be cinematic, I didn’t really put much effort into optimization and performance, so I pretty much went all out on the Megascans plants, density wise. In total, there were about 84,000 plant instances placed using the vegetation tool, and that’s not counting all other vegetation placed from the procedural grass system. 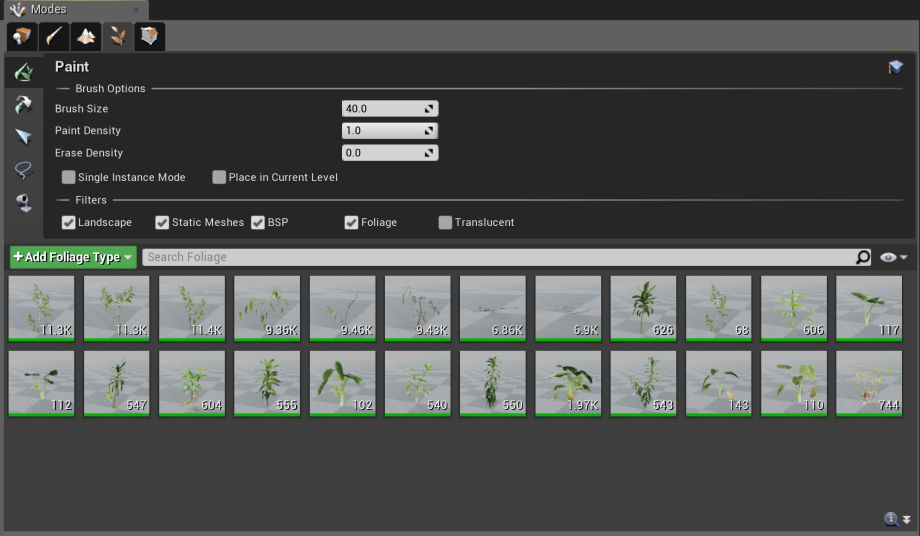 I was also using a smart spline generator plugin to simulate a ton of ivy throughout the environment. This obviously had some drawbacks on how fast I can iterate on the scene since I was now mostly running below 10 FPS. But I would mainly deal with this by simply hiding the vegetation when I was working on something else and also by going into an unlit mode when I was working on the cinematics and camera movement.

The automated import features of the Megascans bridge also helped a ton as all I really had to do was select the plant I wanted, hit import, and it would be waiting for me in Unreal with all materials already set up, and that made iterating and testing out different plant variations super easy and fun.

For the second half of the film, I used some red plants I found on Megascans and hooked them up to the procedural grass system. I then cranked up the density to an obscene number because I was curious what the final rendered result would look like, I could barely render it in real-time, with the FPS dropping below 1, whenever I turned it on, but I really liked how it turned out. 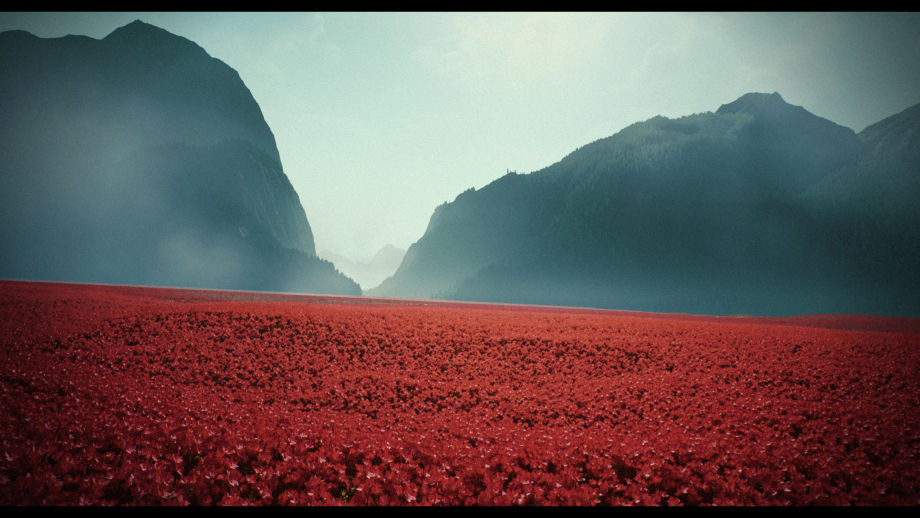 I only plugged one instance into the grass tool. And added some height variation parameters as well as making it align to the landscape surface. I also made it so, that it doesn’t cull and become invisible at a far distance. 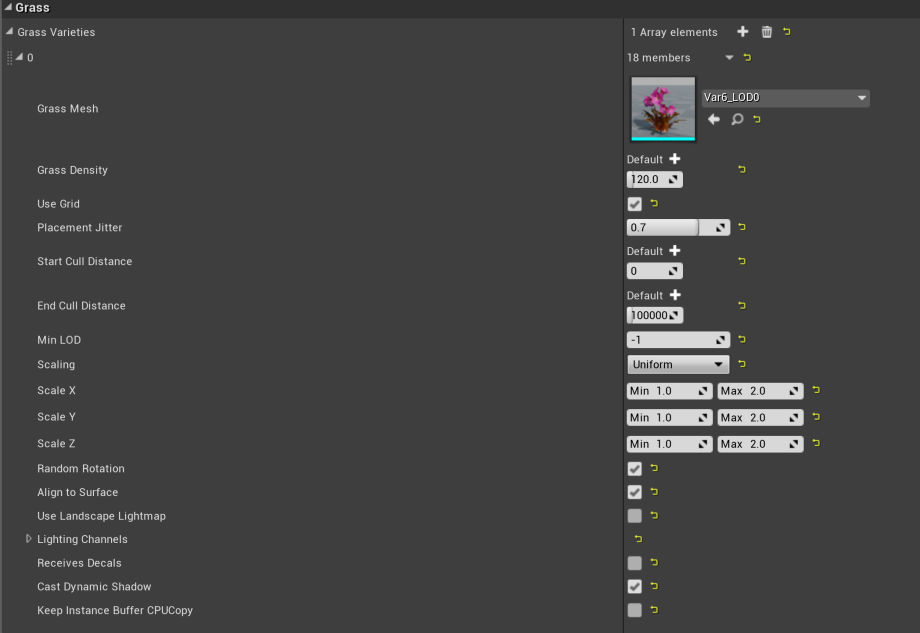 Here’s what it looks like with the grass on and off:

Since I was using a fully dynamic lighting system with no GI, I utilized a lot of local light sources to fake bounce lighting and also highlight some of the points of interest in a unique way. Volumetric fog also helped a ton to give the scene some depth and separation. 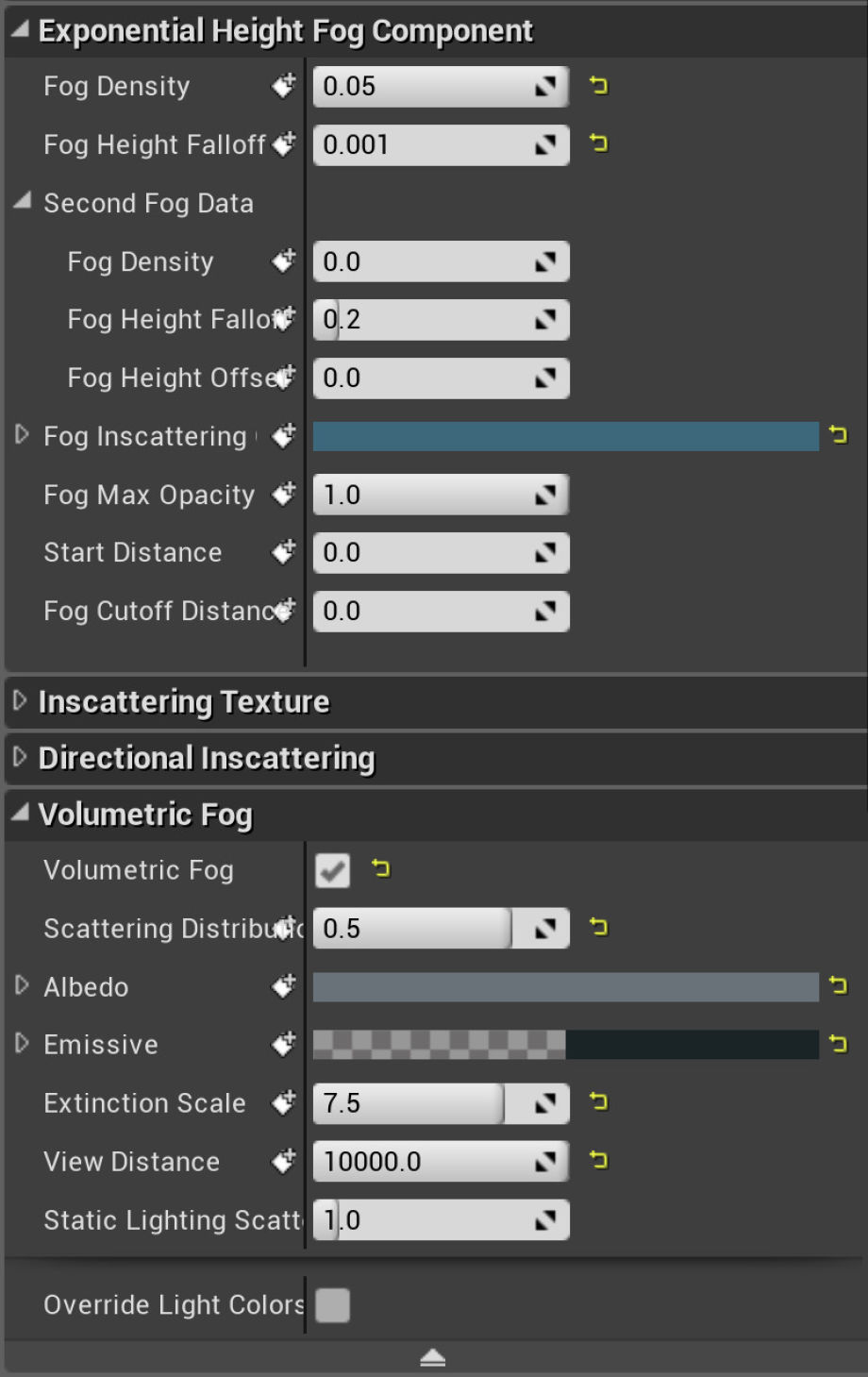 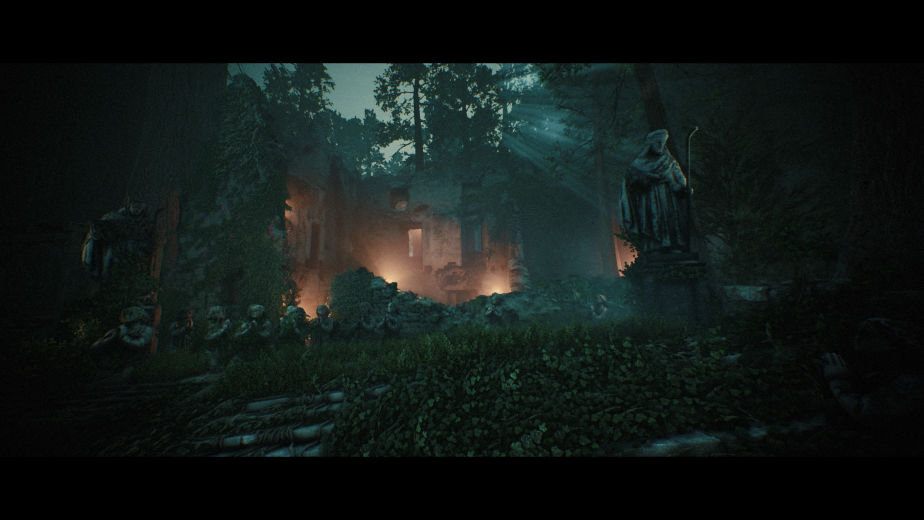 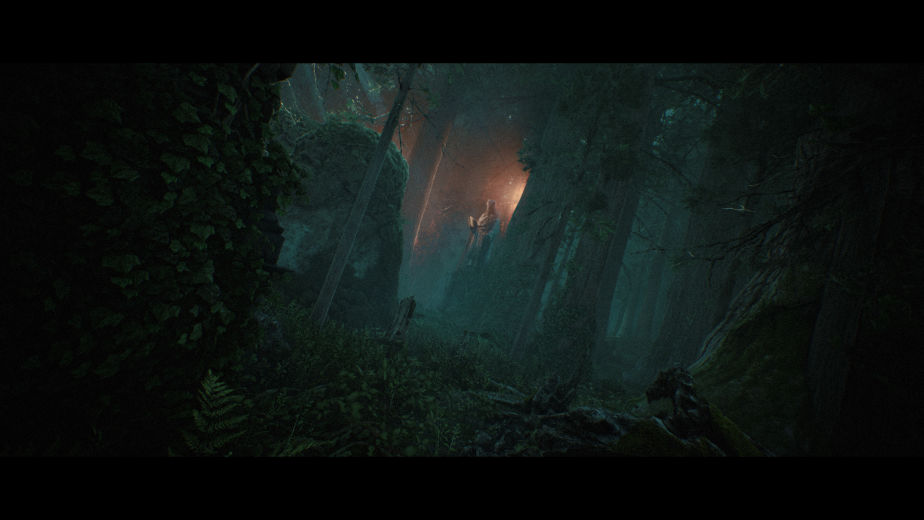 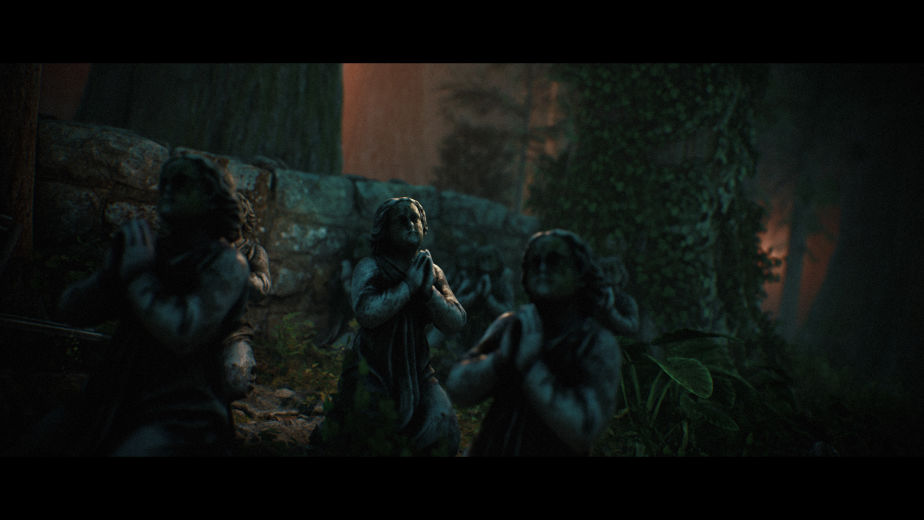 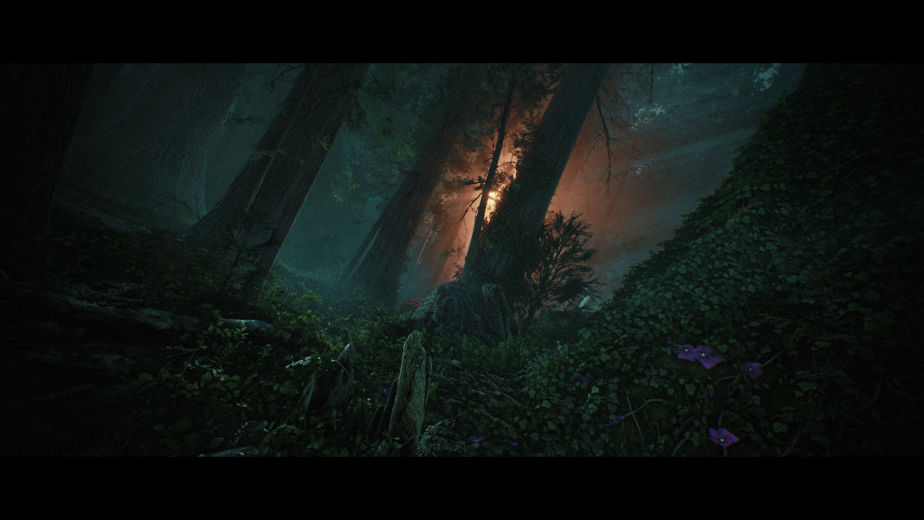 I’ve really been into one-take shots in movies/games for a while and have been experimenting with that in some of my other personal projects.

I feel like for these types of scenes I used, it helps a lot in selling that smooth, dreamy and cinematic mood compared to just using multiple cameras in a sequence.

So I did the same thing for this. I basically ran the camera around an early Blockout scene I had at the time and recorded the keys. After that, it was more or less just refining the movements and building the whole environment around the sequence. Here are some shots showcasing the progression of the environment and camera sequence over time.

The biggest challenge I had for this project was assessing how much I could do compared to the amount of time I had. I felt like what I wanted to do for the project was a bit too ambitious to complete on time but realized that a bit too close to the end. So there were many ideas that I wasted time on that prevented me from being as efficient as I wanted to be in the end and deliver a better result. And that was mainly because I didn’t really pre-plan and layout an outline for the project in the beginning. I mainly just had a general idea and direction and was just exploring as I went along. Which led me to scrap a lot of things because I didn’t really have enough time to make them work. So setting an outline and nailing down the concept right in the beginning would be my first priorities moving forward.

And lastly, here's an alternate version of the final render for the cinematic. I made a render of the whole sequence every weekend to see better what changed since the last time and get a clearer understanding of where it was going, there are some things I like better in this sequence compared to the final render but overall the end result feels better to me:

Thanks for reading! I hope you found this article useful if you have any questions for me you can always reach me on my Artstation.