Experienced 3d artist Xavier Coelho-Kostolny talked about his adorable project based on Moblets. Grumpy Shrumbo is an exceptional piece of fan art created with the help of Zbrush and Marmoset Toolbag 3. 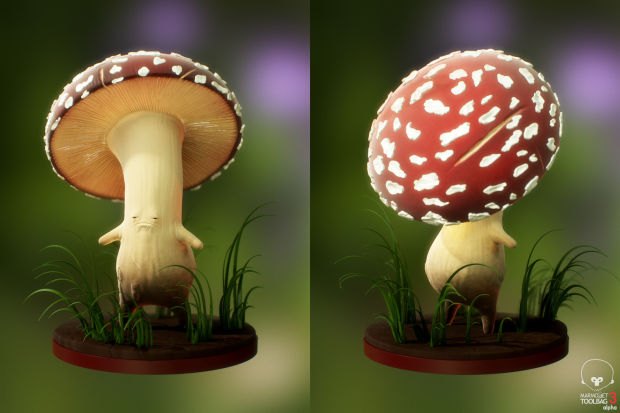 I am a 3D character artist working with Insomniac Games on their upcoming Spider-Man game for the PS4. I’ve been working professionally in the industry since 2011 where I started as an associate artist at S2 Games working on Heroes of Newerth and Strife. Since then, I’ve worked with Cryptic Studios on Champions Online and Neverwinter, Facepunch Studios on Rust and other projects, and a slew of freelance work for various companies over the past couple of years including a freelance position on Ratchet and Clank for the PS4. In addition to in-house projects and freelance, I also contributed to the first wave of user-generated content for Team Fortress 2 way back in 2010.

I’ve been in-house with Insomniac Games since November 2015.

Grumpy Shrumbo is a piece of fan art for the absolutely adorable game Moblets, a currently-unreleased strategy and farming game produced by Rebecca Cordingley. In Moblets, you can collect all kinds of fun little pets, and one of them is called the Shrumbo. He’s a cute little mushroom guy!

I thought it would be fun to make a very grumpy version of the Shrumbo in a more gritty, semi-realistic style, so one morning I simply started throwing around ideas in Zbrush. After a few false starts, I had a workable ZSphere sketch with the general proportions I wanted, and from there I started thinking about how I wanted the final product to be presented. 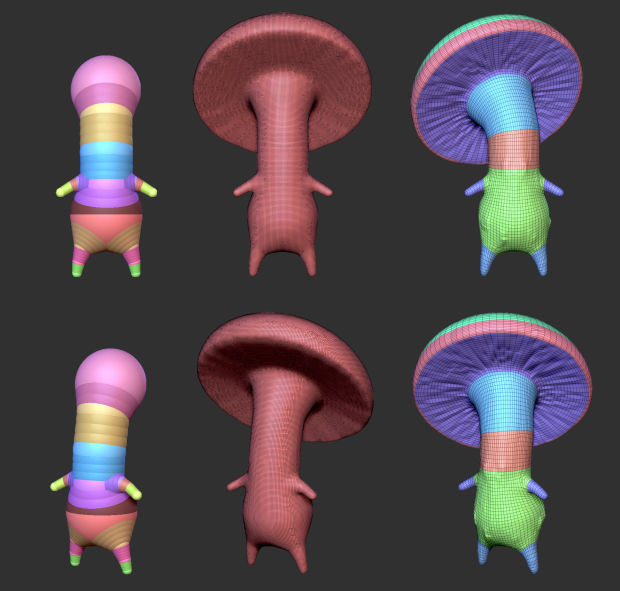 This model was made entirely within ZBrush. While I initially wanted to make a finalized low-poly character with a full suite of texture maps, I instead decided to utilize ZRemesher, Polypaint, and UV master for about 90% of the modeling and texturing process. This doesn’t give as much control as hand-made UVs or very clean low-poly topology, but it does work very well for simple still images.

After I made my initial ZSphere model, I turned it into DynaMesh, did some simple shape editing to get large forms such as the mushroom cap, and then moved on to ZRemesher.

To make sure I was able to have some amount of control over topology, I split the mesh into Polygroups and then used ZRemesher with KeepGroups on. This ensured that I could hide or reveal parts for easy sculpting and masking.

To create the striated pattern on the lower side of the mushroom cap, I masked off everything but a single Polygroup and started then painting masked lines until only thin sections were unmasked. From there, I just had to use the Deformation>Inflate slider to push unmasked areas in.

The most challenging part of creating the model itself was making sure that all my Polygroups were consistent and easy to work with so that I could do easy masking like I mention above.

To create the pedestal and grass, I used simple Zbrush primitives for the cylindrical shapes and FiberMesh for the grass.

One of the biggest parts of capturing the character of the original Shrumbo is making sure that he has good color and value readability. To this end, I tried to keep strong contrast in both color and value between neighboring parts of the model. The red of the mushroom cap, for example, contrasts very strongly with the light yellow of his body and the white of the flecks on top. I tried to keep the white flecks far from any yellow sections to maximize how well their silhouettes read.

Another important aspect of readability is making sure the eye is drawn to the right place. This can be achieved in many ways, and one of the ways I do it is with a very distinct color gradient. Shrumbo’s feet are a dark brown color to contrast with the clean light yellow of the rest of his body. This gradient combined with the long vertical stalk should serve to draw the viewer’s eye up to the face and mushroom cap.

To augment the color choices I’ve made with the character and environment, I also need to think about how this character fits into his environment spatially. This is where things like depth of field and other post-processing tricks come in. While the Shrumbo in Moblets is actually fairly large compared to the player character, I wanted something that felt much closer to the scale of an actual mushroom. To that end, I accentuated the depth of field as well as the contrast and saturation to make it feel like a very tight macro photograph of a small subject.

To create the final textures for the Shrumbo, I used UV Master on the ZRemeshed model, created a color texture from Polypaint, and used that as a basis for some simple gloss and translucency textures that I painted in Photoshop. The pedestal, including the grass, all uses Polypaint for colors. The flecks on the top of the mushroom cap use a solid white color.

Marmoset Toolbag 3 was invaluable in the process of creating and presenting this character. By utilizing its ability to display high-poly geometry and vertex colors, I was able to quickly preview how the final shots should be composed and rendered. 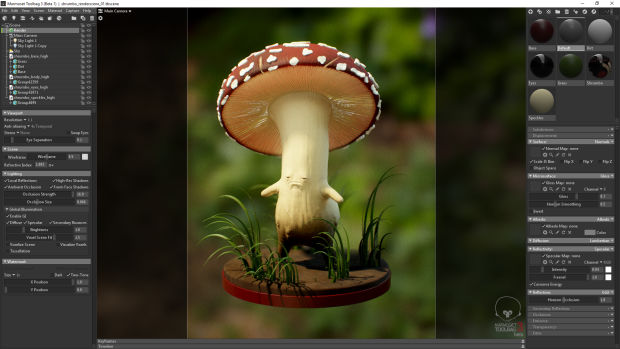 In addition to previewing how I wanted it to look, the final renders were also done in Toolbag 3 and they take advantage of the new voxel GI system for getting better bounce light and shadows. Voxel GI was extremely helpful for anchoring the details of the scene with believable shadows that would’ve been very difficult to achieve without bounced light. In addition, the render time is incredibly short compared to offline renderers, so it makes a perfect choice for scenes like this that were made over the course of just a few hours. 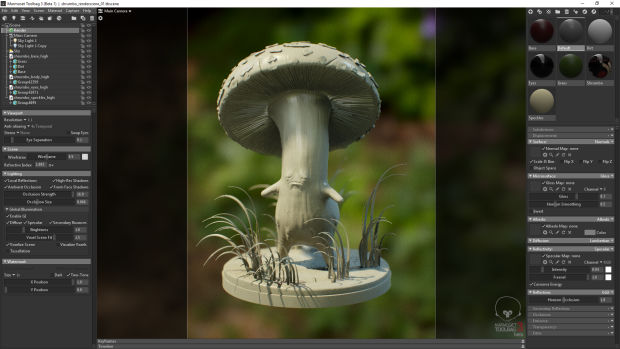 Aside from voxel GI, the lighting setup is extremely simple. I used the Forest Path sky that comes with Toolbag to get some nice ambient light, and then put a single warm key light and a cool fill light. I wanted the scene to feel warm and inviting, but also as if it was shot outdoors, so the key light is a warm yellow to simulate the sun and the fill is a light sky blue. 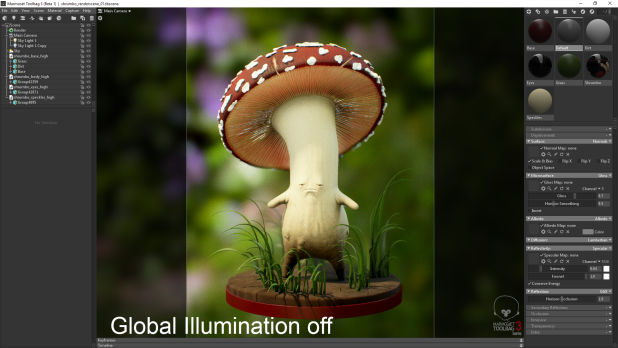 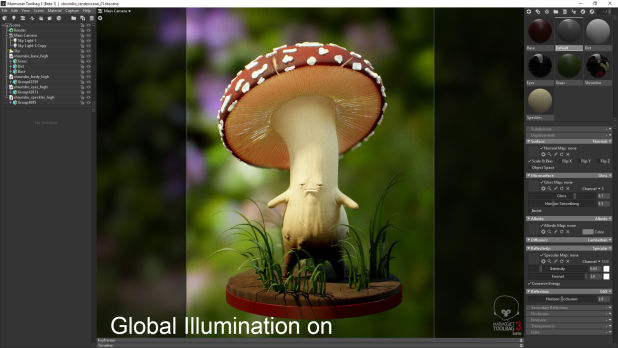 Because I wanted the scene to feel like a macro photograph, I also used bloom, film grain, and vignette to achieve a more filmic look.

I count Marmoset Toolbag among my favorite pieces of software. Its depth and ease of use are second to none, it’s always a leader in realtime rendering technology, and it’s absolutely perfect for presentation shots. The ability to also present projects in 3D online is also a fantastic tool for any realtime 3D artist.

When trying to create characters, the first things I try to keep in mind have to do with how the character will read from a distance. Making distinctive characters isn’t just about having original ideas; it’s about making something that people visually understand from the outset. To that end, the first thing I focus on is the silhouette of the character. Silhouette is the most important aspect of making a character because it’s the first thing people will see in almost every circumstance.

With the Grumpy Shrumbo, the silhouette only needs to communicate a couple of things: 1, he’s a mushroom, and 2, he also has stubby little arms and legs. From a gameplay perspective, this tells you that he’s probably going to be able to move around a bit, and he may do something gameplay-related with his fungal properties. You get all that from a single glance at a silhouette.

One step down the hierarchy from silhouette is value readability. I already mentioned using strong light and dark values before, and this is why. Strong contrasts between light and dark inform the viewer of where to look. The areas with most contrast, the blacks and whites, are where people will want to look first. Other areas of a character should often have value gradients leading to these areas to help draw the eye to important places.

I tried to put all my value contrast in the areas I thought a person would naturally want to look: the mushroom cap and the areas of the body leading to the face.

Next on the readability hierarchy is color. Color often tells you a lot about a character, especially in video games with team-based elements. In the case of the Shrumbo, color mostly tells you a little about what kind of mushroom he’s based on. However, I also tried to include some areas of lighter color to look like battle scars, as well as some dirt to show that he’s been mucking around outside for a while.

These elements of a character design are the things I consider whenever making a character, and they help for things that are cute or ugly, realistic or stylized, human or non-human.