Tommy Gunardi Teguh did a very nice talk about the way he created his amazing character. 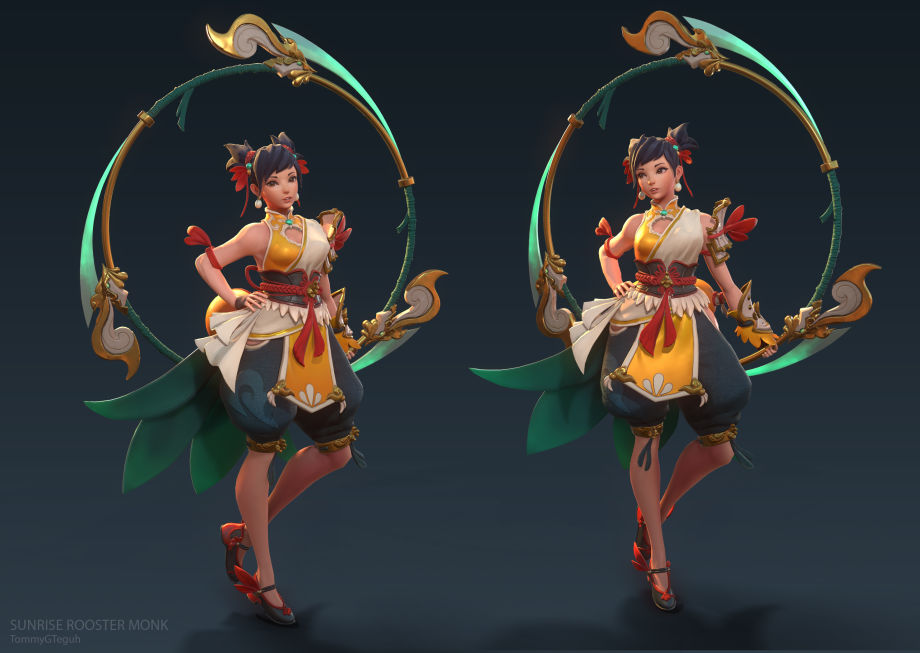 Hi! I am a 3D Character Artist currently working for Riot Games. I do a wide variety of stylized game-res characters and love hand-painting textures. Previously I’ve worked Freelance with several dev teams across the game industry, notably Insomniac Games. I’ve been based in several places, but I come all the way from Indonesia and then moved to Australia to study and work for almost a decade.

Right now I reside in Hong Kong doing some cool stuff with the people at Riot here!

For a game character, Shape Language and Readability are the two key points I look at whenever I execute a concept in 3D. Of course, as a rule of thumb, your basic Art Fundamentals such as Anatomy, Color, and even Lighting and Composition are expected to be on point, but I find these two points help polish my characters further.

Strong shape language helps push a character’s appeal and personality. By being able to capture and alter the subtle shapes on he face, for example, we can adjust the character’s overall read.

Early on, I played around with the facial features of the Rooster Monk. A higher eye height relative to the nose and mouth will shift the character to look a bit more aged for instance. While bigger eyes bring out a much younger, more exaggerated look on her. I ended up leaning with option A as this suited my vision for this character. I made changes to her hairstyle and attire to further establish the direction I wanted to take her to.

I will get into talking about Shape Language further and touch on Readability later. 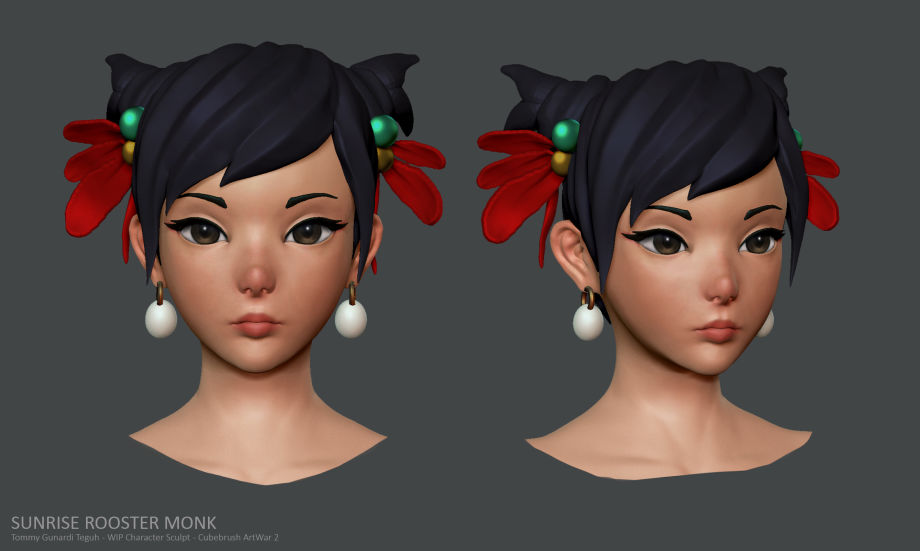 When starting out, I block in with large broad shapes first! I tend to stay zoomed out so that I can figure out the overall silhouette of the character before getting caught up with details.

While I have a rough humanoid base mesh that I’ve built across the years to help me jumpstart a project, I usually end up sculpting a lot of features from scratch anyways on a case by case basis. 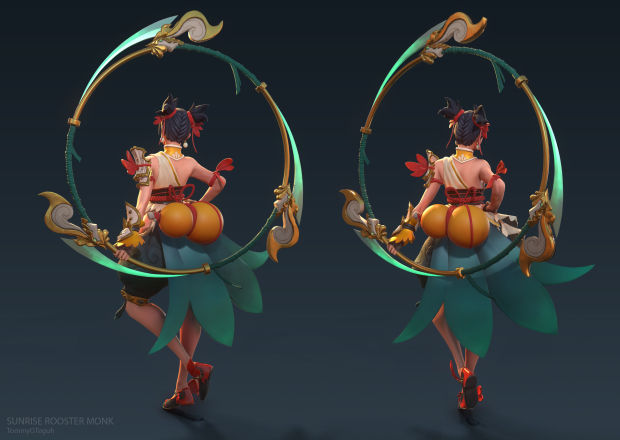 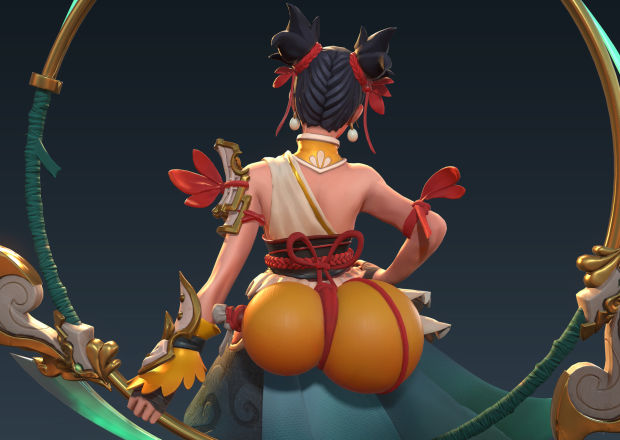 I occasionally take a screenshot from ZBrush and do a paintover in Photoshop to create visual targets or milestones that I’d like to achieve with the sculpt. Anything to visually develop the character’s image in your head works!

Once the larger shapes are locked in, I close in on the details like armor pieces, folds and so on until I get the final result. 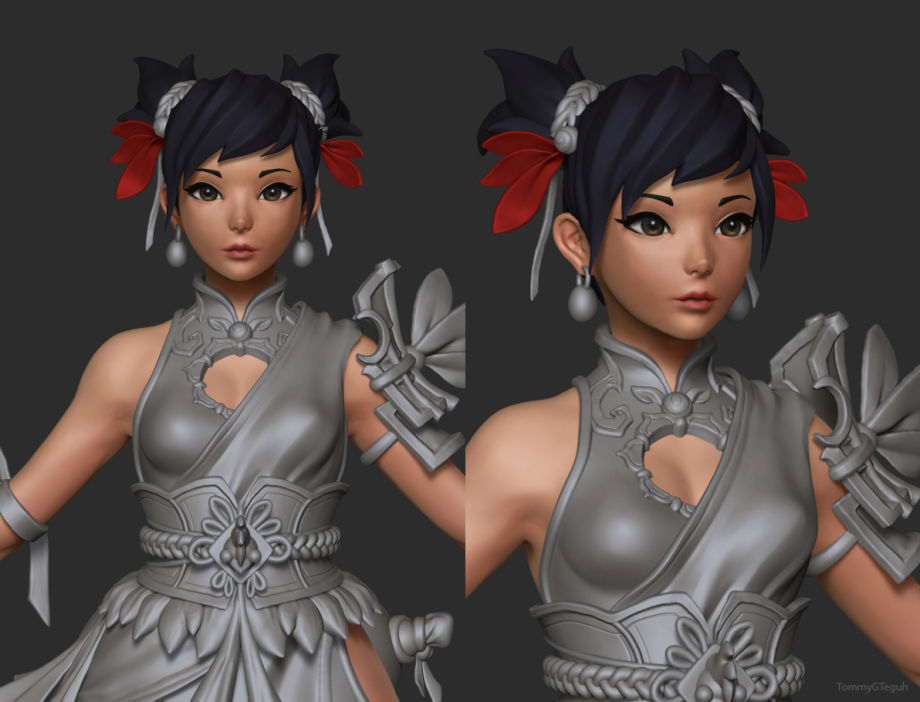 Having detail everywhere is as good as having no detail at all. The key is to have detail in the right spots to maintain Readability and create the impression of detail.

Readability is key. Especially considering the fast-moving nature of video game characters, too much detail on an object or character will end up as noise. Small details should add visual interest to your major silhouette reads, not distort them. Details on the Rooster Monk are placed in areas where I would like to draw attention. The area around her lower torso is the busiest since that is the bulk of her design, while areas like her calves and arms serve as visual resting spots that also bring out her strength and femininity.

Thus, having both high and low density detail in a character not only makes it easier on the eyes but also elevates the character’s features even more.

Since I consider this character’s visual direction as ‘Stylized PBR’, I tend to bounce between a few software to achieve the look.

I start out in Substance Painter to quickly generate various materials on her to gauge whether those materials work with one another or not. Their layering and masking system makes it very easy to swap out and adjust materials quickly.

Once I get something I am happy with, I generate the diffuse, specular, gloss, and normal maps and export them out.

From here I take the Diffuse map into 3D-Coat, where I prefer to do all my hand-painting! The color palette I used references the various Roosters that you will find in nature. 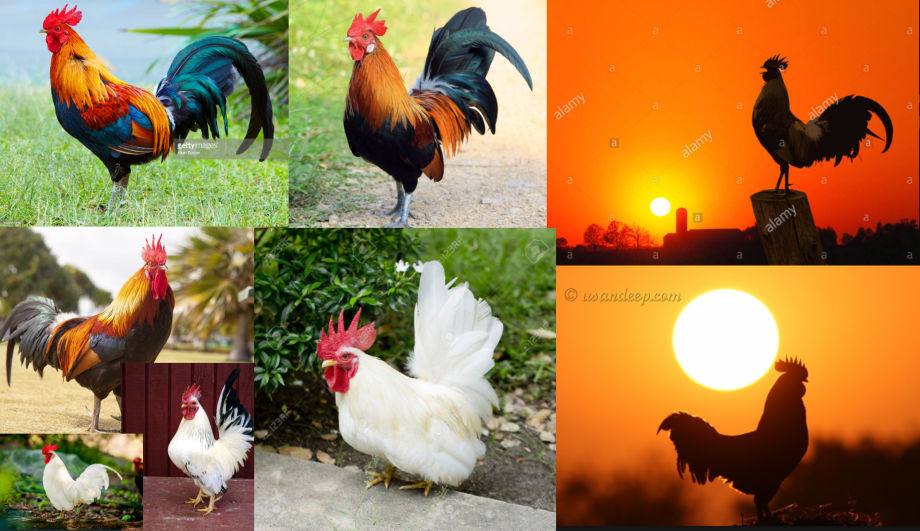 I find a lot of the texture appeal from Stylized PBR characters tend to come from the Diffuse. Without going overboard, I painted in color gradients, subtle bounce lights, and add definition to edges where needed. Unlike some of my other character work that has fully rendered Diffuse textures, I will have to keep the lighting as close to neutral as possible, painting in lights only to bring out surface detail like patterns and bevels.

Note how the more metallic areas are colored very dark. For these and other reflective materials, I paint the colors on the specular map. 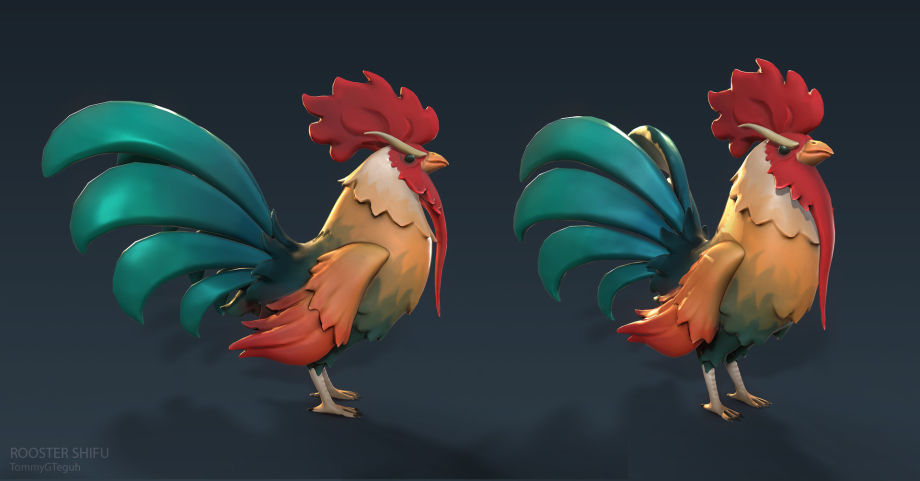 For the character’s skin, I paint in a nice color shift of bluish to reddish tones to breathe some life into it. I prioritized rendering the face just a little bit more since it is a major part of her.

As for the final presentation of the Sunrise Rooster Monk, I have to give it to Marmoset Toolbag for being an absolutely awesome software to work with. Notably, their skin shader is very easy to use and did not really require much additional work to make the skin look that much better. 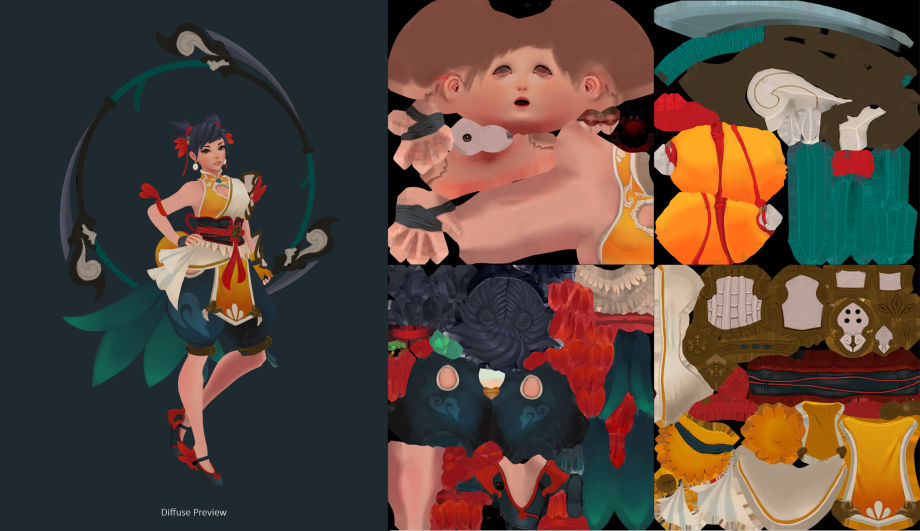 Pose and Compose your characters! There is a lot of value in taking the time to plan and create your final presentation.

As a general rule, I start with a basic 3 point lighting setup consisting of a Key Light, a Fill Light, and a Rim Light. From there, I will then add minor lights to tweak the lighting setup slightly for areas end up being too dark, or if I need to emphasize a feature of the character further.

When I first designed the Sunrise Rooster Monk, I had a very specific composition in mind for her from the get-go. I wanted to capture the feeling of a Rooster crowing with the sun rising behind it.

With Chakram held high, a balanced stance, and warm rim lighting, I was able to present her in an aesthetically pleasing manner while also subtly tying her visual thematic together! 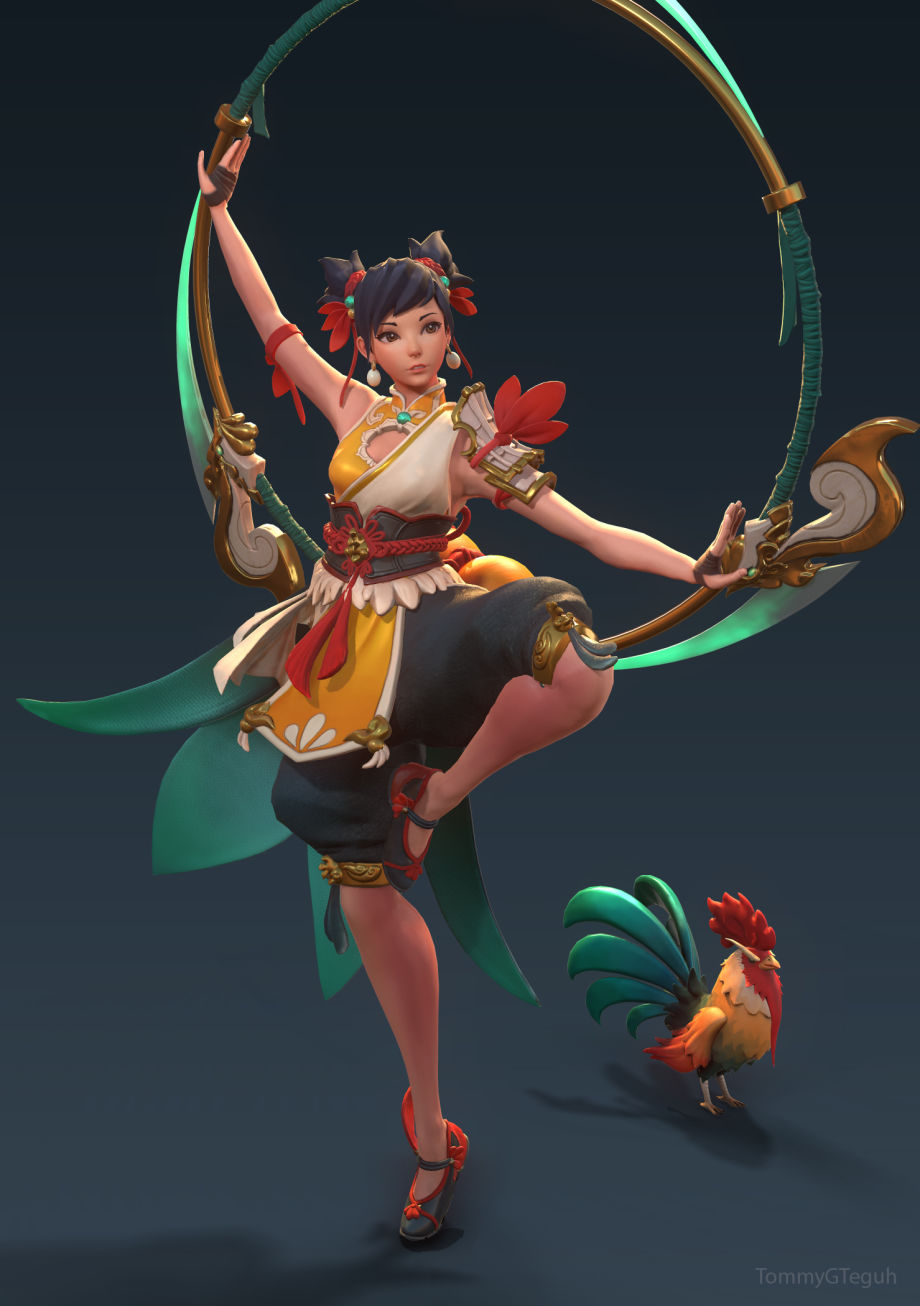 At her current state, she is practically rigged to move and ready for animation. I will get around to animating her eventually as I am very keen to revisit this personal character of mine! I feel using martial arts inspired movement, especially Tai Chi, is most appropriate to show her as a monk. The character Nezha, from Chinese mythology, commonly portrayed in Chinese fantasy shows and games, is also another point of reference I’ve been looking at for inspiration.

Production for her spanned across a few months since I did this on the side, but added up this would amount to about 5 weeks of work from Concepting, all the way up to Sculpting, Rigging and being Game/Animation Ready.

Designing her was the biggest challenge for me. I don’t design very often, so I forced myself to improve by really taking the time to come up with a concept that reflects the themes I have chosen.  I feel very excited that people have come to really like this character I have heavily invested myself in from conception to realization. Thank you!