Nick Vigna discussed the details of his project Forest Trail made at CGMA: sculpting and coloring vegetation in ZBrush, material and lighting setup in UE4 and Substance Designer, and more.

Hello, my name is Nick Vigna. I’m an Environment Artist in the Seattle area and I have been playing video games since I could first pick up a controller.

I got my start in the industry at Signal Studios, where I had the great pleasure of working on all three Toy Soldiers games, initially as an environment artist and eventually as a lead artist. After that, I decided to dramatically mix things up and became a UI Artist/Generalist (and eventually Art Director) at a mobile game studio called Ember Entertainment. There I worked on numerous 2D mobile games while wearing a great number of hats. Although I really enjoyed working at the studio, the call of the third dimension was too strong, so I decided to get back into 3D console games. Recently, I was hired at Valkyrie Entertainment as a 3D Artist, where I get to work on some incredibly exciting projects, including the new God of War that was recently announced.

Believe it or not, the first piece of media that got me into 3D was an indie short film called The Killer Bean 2, by Jeff Lew, which I saw when I was a kid about 20 years ago. Something about the fact that this one person made something so cool left a big impression, and I knew I wanted to do the same.

You could say that I got my first brush with “game development” while making Half-Life mods and levels in high school, and dabbling with a 3D program called Milkshape 3D. Hopefully, I’m aging myself well at this point.

My interest in 3D and gaming led me to the Digipen Institute of Technology, where I learned a lot about art fundamentals and making 3D art. More recently, my art skills have gotten a little rusty, and I started to feel my personal projects could only take me so far. So I decided to enroll with CGMA with the hopes of revitalizing my skill set, push myself outside of my comfort zone, and end the course with a solid addition to my portfolio.

Vegetation is something I have never felt comfortable making, and I must admit I have never modeled a single bush or tree in my career… or at least not one that I’d feel comfortable pointing out in a game! So the course Vegetation & Plants for Games taught by Jeremy Huxley felt like the perfect fit. 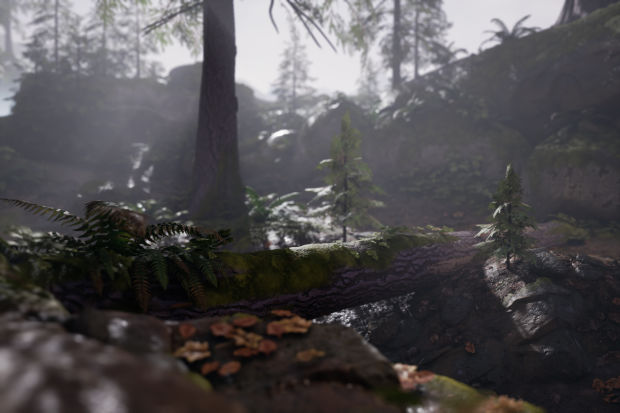 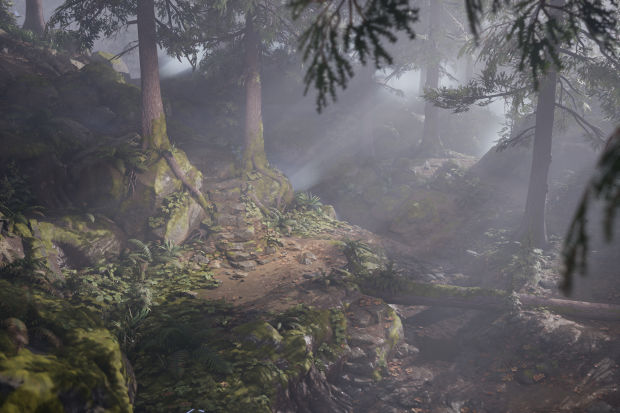 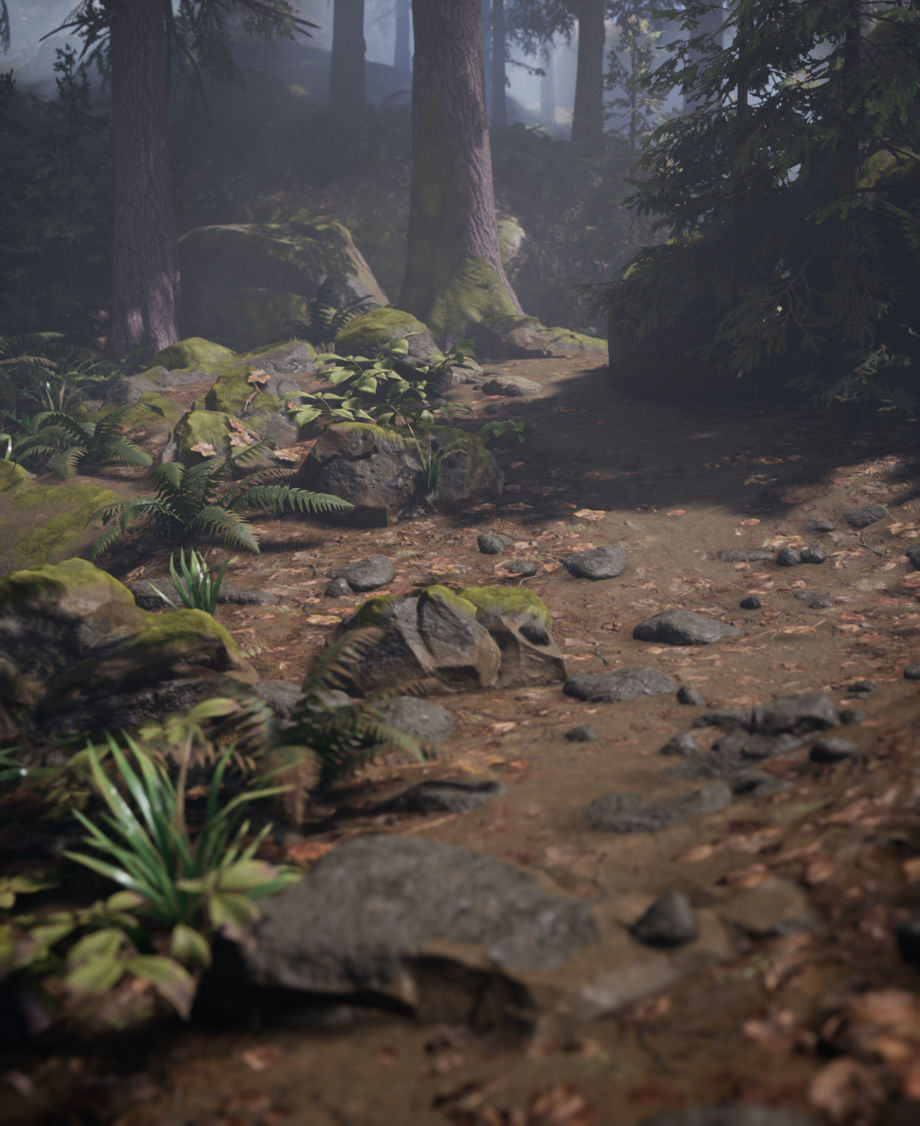 One of my favorite parts of this course was that Jeremy encouraged us to make a scene based on something that inspired and excited us, as opposed to just following along directly with him. I live up in the Pacific Northwest, and I knew that I wanted to make a scene that evoked the same feelings I get while hiking in the Cascades. That feeling of coming around a bend and into a clearing that is lush and vibrant and inviting and beautiful and saying “how do I capture this in a single photo?” And finally, I wanted to tell a story. I try to give reason to everything I make, from the way a leaf may age, to the way a tree has fallen on a path and is now worn away from hikers, to how a small mudslide occurs where someone tried to climb up loose soil. Although players or viewers may not notice all these details, I believe the more intent I can place behind my creations, the more believable they will be.

Very early blockin of my scene:

For research and reference gathering, I focused my efforts on finding images of vegetation found here in the PNW. I used several websites, such as nativeplantspnw.com and realgardensgrownatives.com, as well as many of my own hiking photos. Part of the fun was identifying which plants I found on my hikes, and searching for reference for those plants specifically. The process was educational beyond just art, and I feel more knowledgeable and closer to the local flora than I had before.

With my reference gathered and using the guidance and instruction of Jeremy, I created collages and broke my scene down. I’m sure many 80 Level readers already know and use PureRef, but if not, I highly recommend it! And please, throw the devs a small donation if you can, because they deserve it as I feel their tool has become a vital part of many people’s workflows.

Breakdown of my reference: 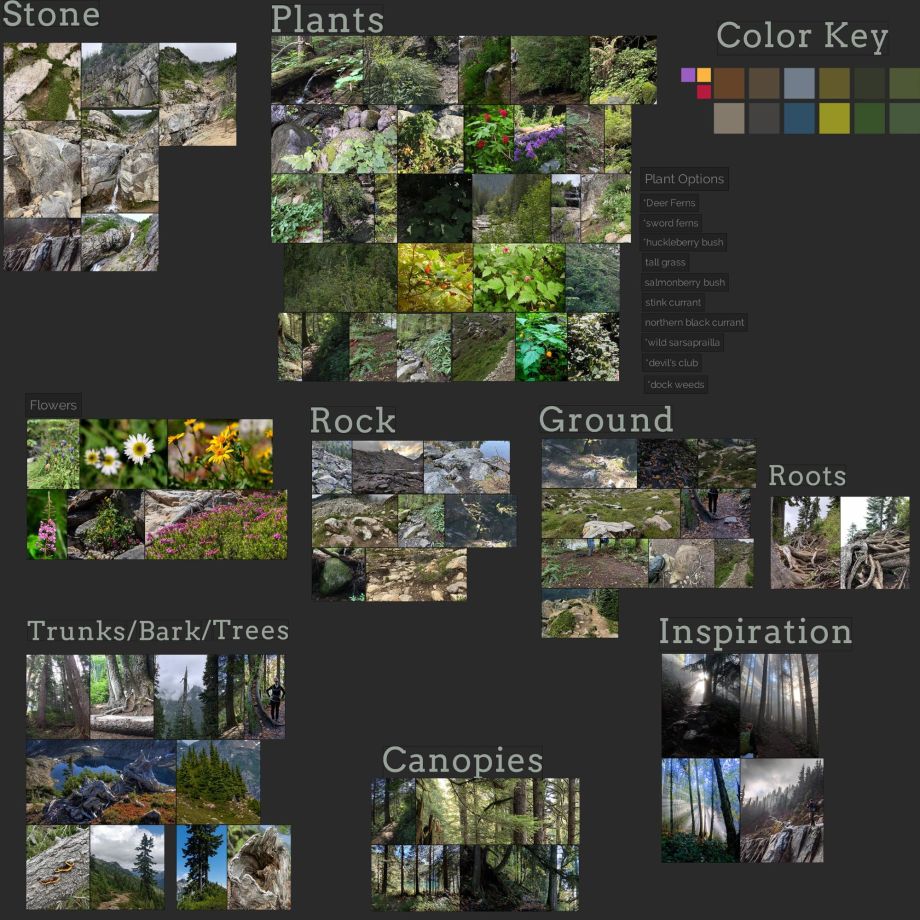 Honestly, a lot of the techniques I used to create my vegetation were learned directly from Jeremy. I was a novice when it came to sculpting and modeling out a plant, so I learned a lot in the process.

Each plant starts simply, by sculpting a leaf. I keep the best closeup images I can find on my second screen as I push and pull the shapes from a sphere. The geometry gets messy quickly so I continually dynamesh it. I try to work with a low res mesh while I block in the large shapes, and then only increase the subdivisions when I’m ready to move in on the smaller details.

As far as brushes go while sculpting plants, I typically stick with just my best friends: Move, Clay Buildup, DamStandard, Inflate, and Orb Cracks. But others will still make appearances like Pinch and Trim [Dynamic, Adaptive, Smooth Border]. 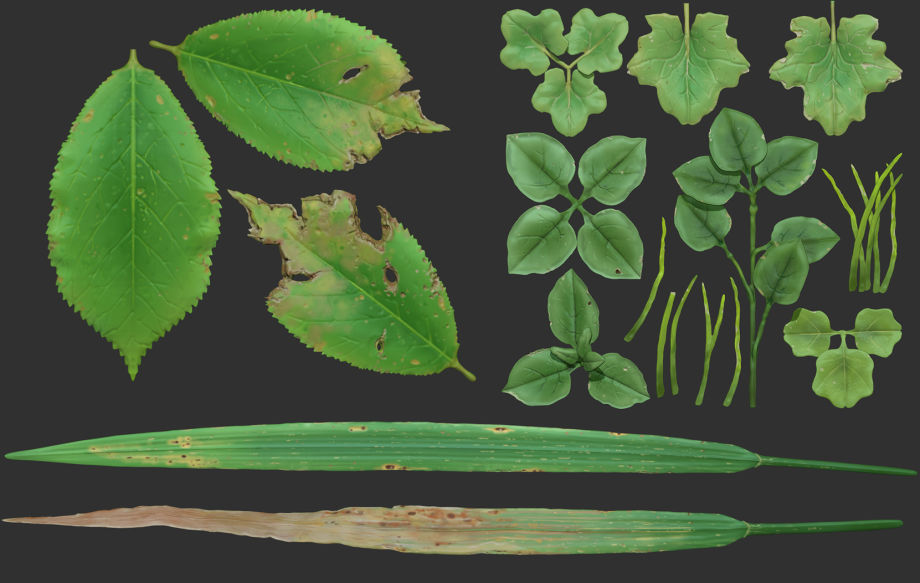 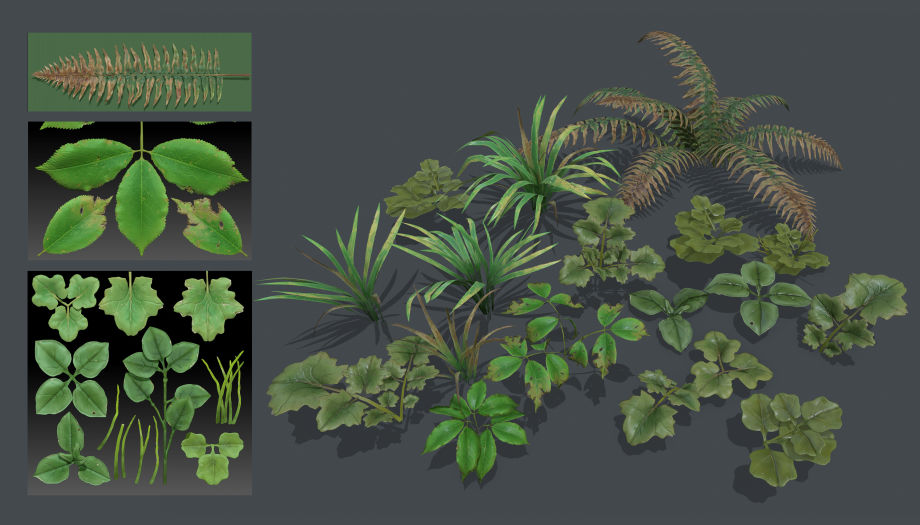 The color for my plants is handled directly in ZBrush, and I always like having at least a little noise in my alpha to avoid an airbrushed and stylized look. There is a surprising amount of color variation in real plants, and it’s important to add that variety to your base color for visual interest. I’d love to have spent more time on this part of my sculpts but time was of the essence!

Once I’m happy with my first leaf, I make variations of them in various states of decay, change up their shapes and silhouettes where I can, and add in different hues of color.

And finally, once the sculpt and color is in a good place, I pack the different elements in a square and bake out the various textures, including base color, height, and normal maps.

The low poly plants were quite fun to make. After baking out the elements from ZBrush to textures, I mapped them to flat planes, cut them out, and created topology for them that allowed me to bend, twist, and combine them. I wound up increasing the size of almost every plant to be considerably larger than they are in real life. I found it helped create that lush and magical feeling that wasn’t coming through when using a more real-to-life scale. 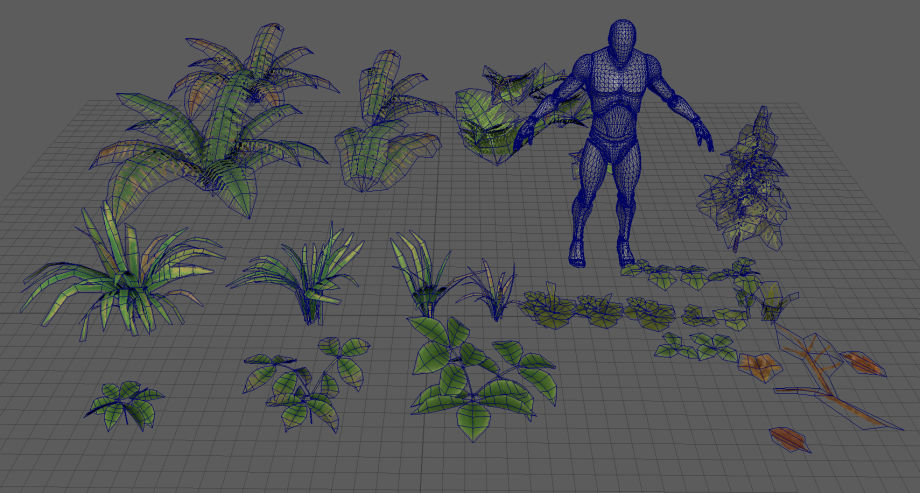 The trees were the most intimidating. They have a fractal pattern of growth starting with individual pine needles connecting to increasingly larger branches culminating at the trunk. The spectrum of macro to micro detail caught me off guard, but the results of all the labor were very rewarding (though I still see so many things I would like to change on them!). 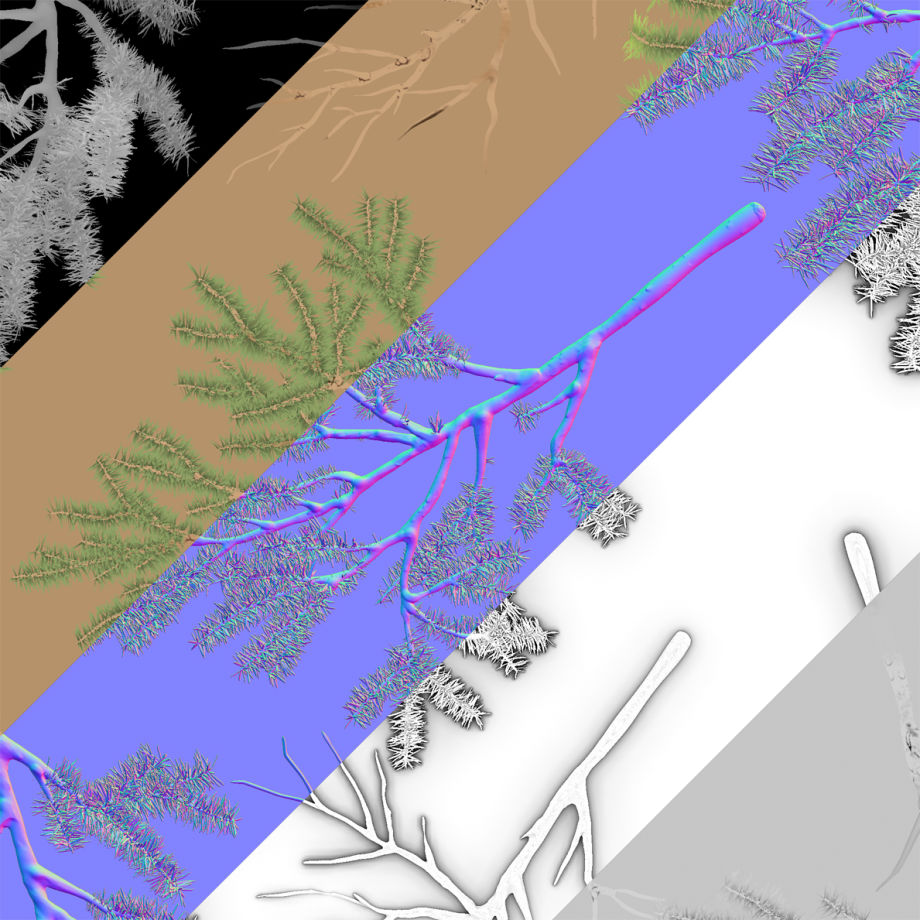 I may have played it a little fast and loose with my tri-counts for the sake of speed in some areas, but I do think some common sense and consideration is required to get optimal performance for a real game. Keep in mind how close your assets will be seen, and from what angles. Your triangles will be much better spent making sure the silhouettes look nice and round, rather than on flat surfaces or crevices that will have a baked normal map anyway. You can also get away with minimal amounts of topology at the top of a tree far from the player or on something low to the ground that they can never get close to. 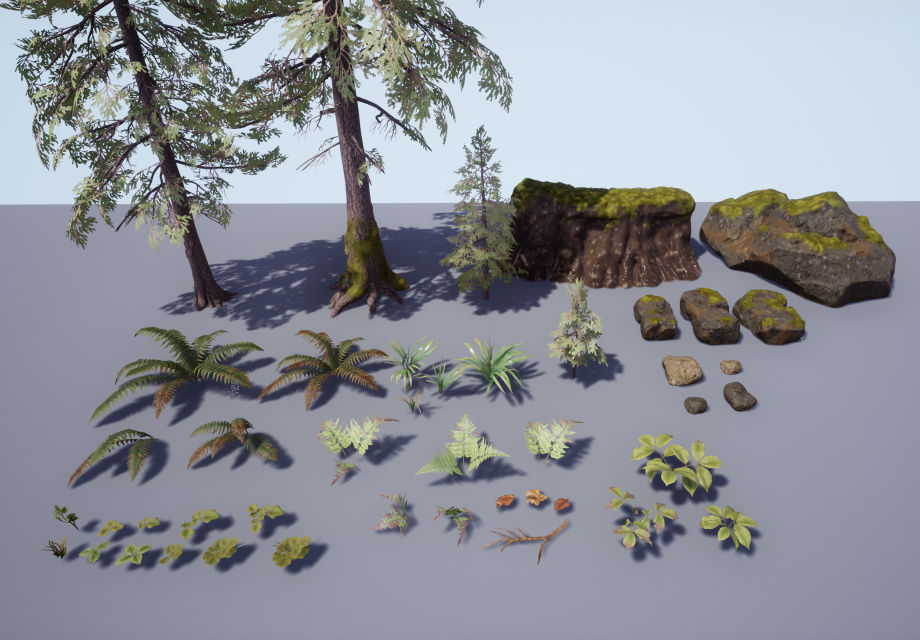 Substance Designer was pretty new to me when I started this course. Jeremy did a lesson that got me rolling in the program and on my dirt and moss materials. From the dirt material, I created variants with more and fewer rocks, as well as muddy variations. I used all of those as vertex color blends on my terrain to prevent any obvious tiling. 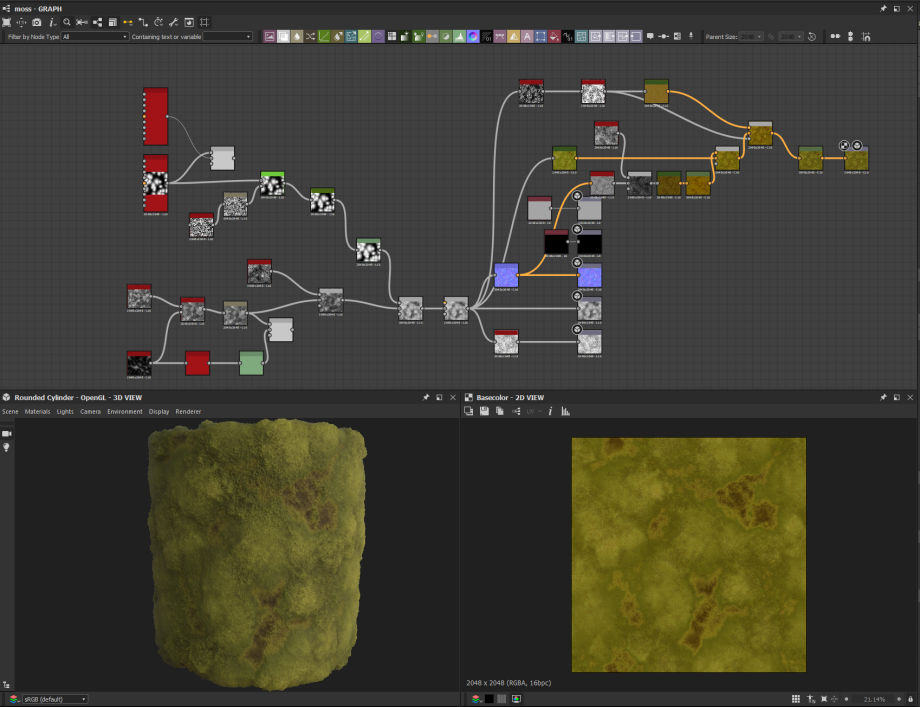 For my moss, I knew I wanted to capture the lush and soft feeling of the moss found in the forests where I live. I started with simple noise generators and added larger noise and cloud generators on top to give it the thick, clumpy look I desired. I directly color sampled from images I took myself. Heavy use of displacement mapping helped really give it the plush look in the final Unreal scene.

Every one of my other materials was a learning process. I would try to find a tutorial similar to my reference and learn how other professionals use nodes to get started. Often their end result would be different from my target but it provided a great base to work from. I cannot recommend tutorials enough, because as a newcomer to Designer, the quantity and functionality of all the nodes can be overwhelming. Substance has some amazing tutorials on their academy website, and I’ve also found Daniel Thiger’s tutorials very helpful.

For the water material, I can not for the life of me seem to find where I got the setup from so I apologize for not giving proper credit. When working on the scene, I searched through several forums and websites for something very simple, and I eventually got pretty close. If anyone wants to recreate it, here is what my material looks like in Unreal: 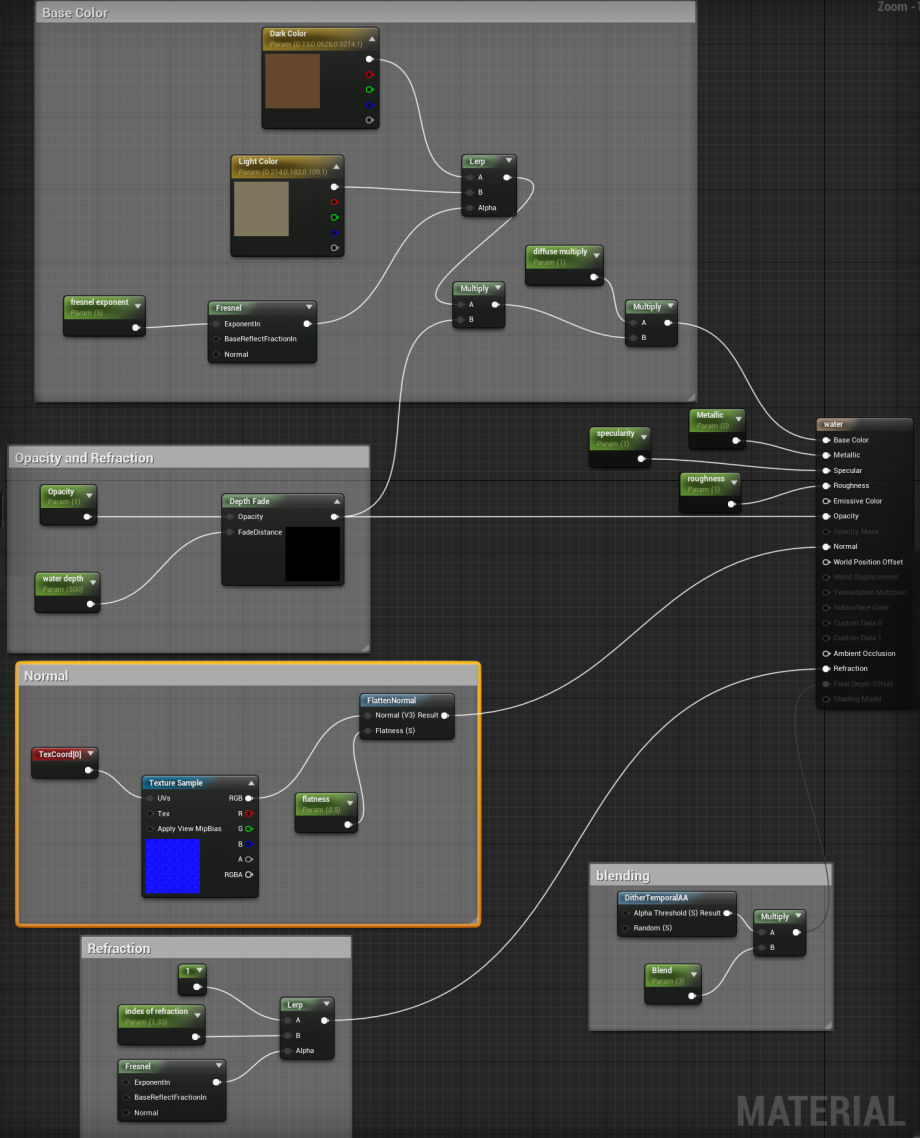 The lighting was by far the biggest hurdle for me, and I spent more time on it than maybe any other element. I have a much greater appreciation for good lighting artists now. Thank you, lighting artists, for making the art look amazing!

I tried many different setups and lighting conditions before settling on the final lighting. For the longest time, I was aiming for golden hour conditions, but it failed to evoke the emotion I wanted. I took a step back, remembered my initial inspiration for this project, and decided to try to capture the early morning mist that I love so much when I go hiking.

In the end, I wound up with a fairly simple lighting setup. My main lighting source is a single directional simulating the morning sun and a skylight. Once I had the angle of the directional light dialed in, I cheated several assets throughout my scene to create interesting shadow patterns on the ground. Being able to simultaneously adjust the lighting and assets together so they complement one another is a benefit of working solo on a project, I suppose. 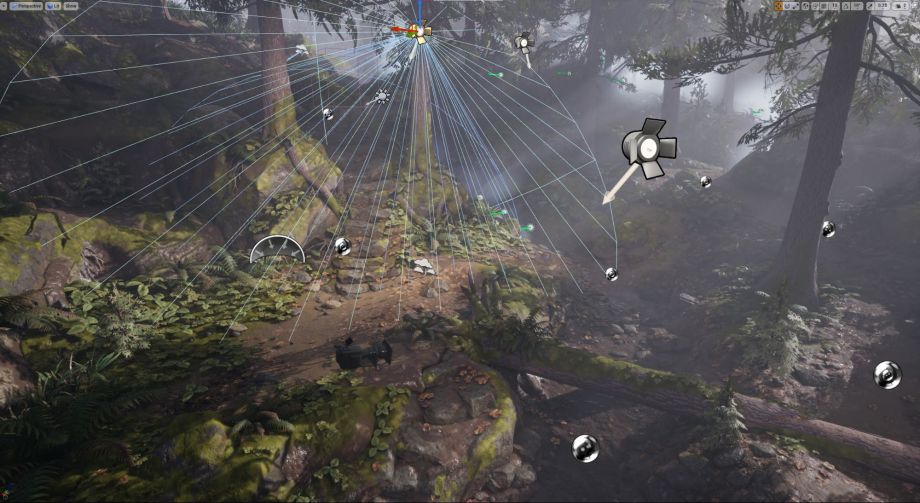 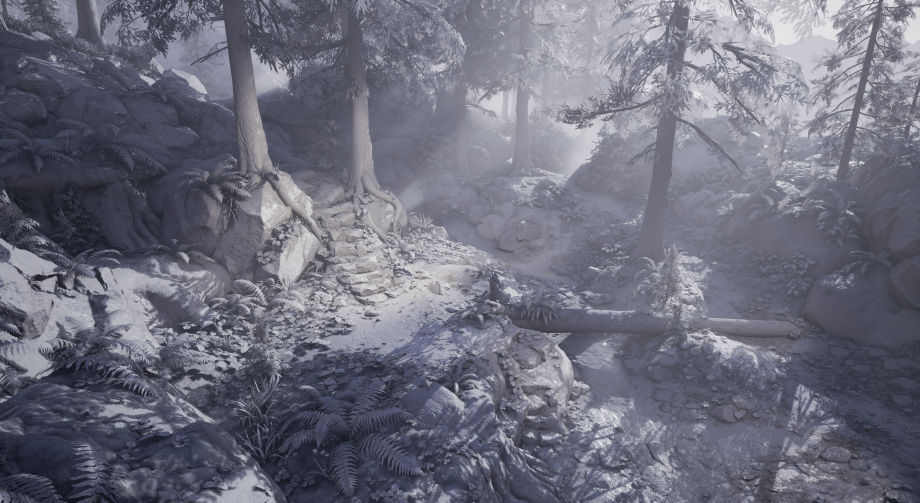 This course helped me achieve everything I wanted when I first signed up for it. It pushed me out of my comfort zone, I learned several new skills, and I finished with a solid piece for my portfolio. Jeremy was invaluable along the way. His lessons taught me a lot, and his comments and critique pushed my art to the next level.

The course also reinvigorated my passion for environment art. I forgot how much I love the feeling of creating worlds and telling stories. It’s a powerful thing to create something, hand a controller to someone, and say “have fun!” and I hope I get to experience that for many years to come.