Tinko Wiezorrek talked a bit about the way he approached the production of his game character. 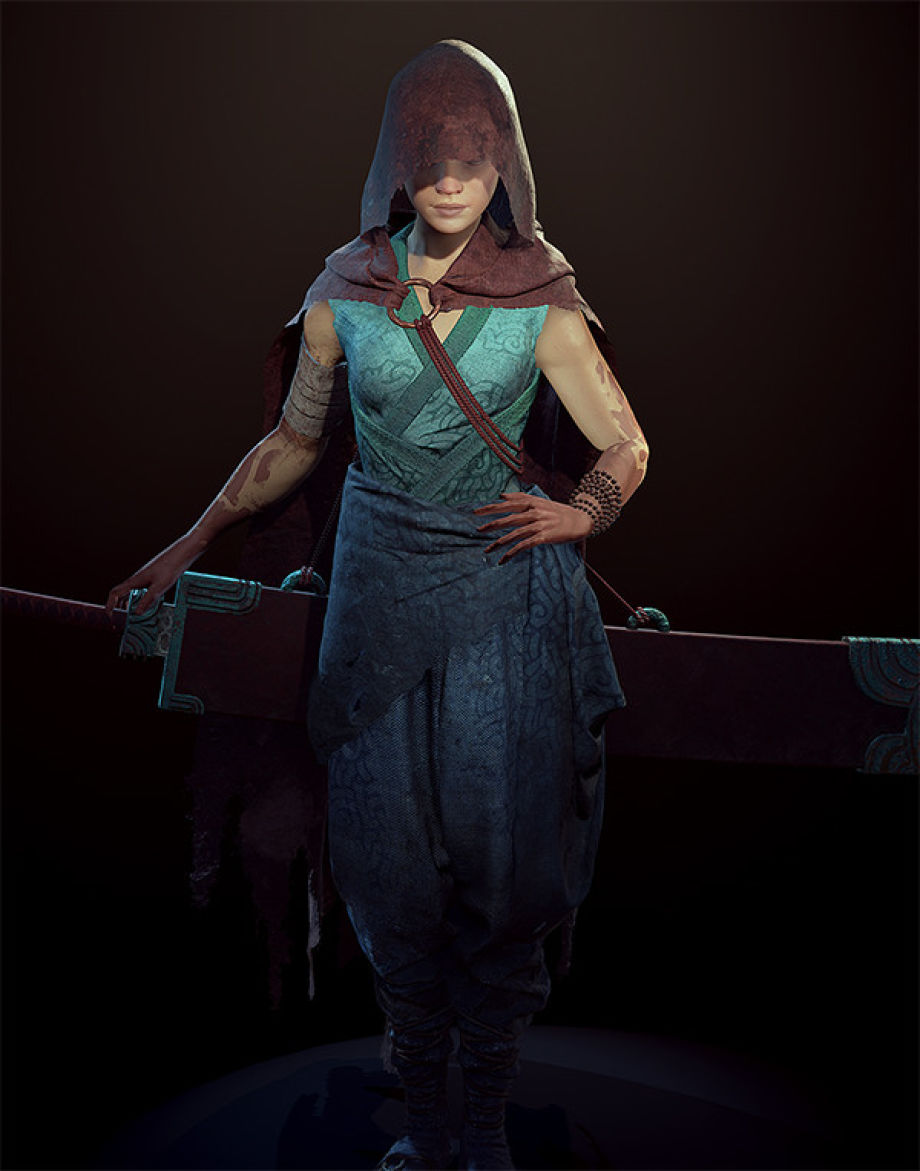 My name is Tinko Wiezorrek, I’ve been working in the industry for 5 years now, currently I’m living in London but originally I am from Germany. Starting out I never really knew what I was going to do with my life, but I was good at art and I loved video games. So I decided to combine the two and took an art course.

I started freelancing for some mobile companies and eventually got an internship at Deck 13 to work on Lords of the Fallen, after that I moved on to Rabcat where I worked on the Crew, Forza Horizon 2, Hitman, Overwatch and some NDA titles. Currently I’m working at Splash Damage on an unannounced project. 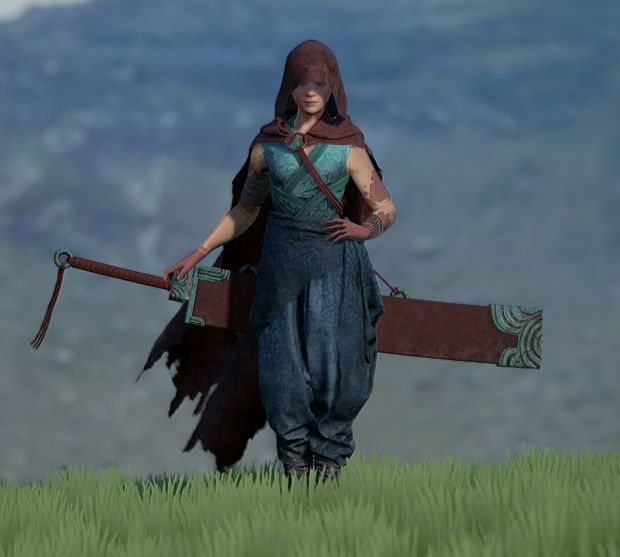 The Most Important Characteristics of a Character

For me there are 2 main characteristics that are the most important. Design and polish.

Designing an interesting, unique and consistent character is quite a challenging task where quick 2D prototyping is very useful. Usually during the transition to 3D some of the charm and crispness of the original concept gets lost and you have to find ways to bring those back or replace them with something that works better in 3D. If you are fast and flexible enough you can also do 3D prototyping, I personally go for a mix of the two since I favor a more iterative approach. 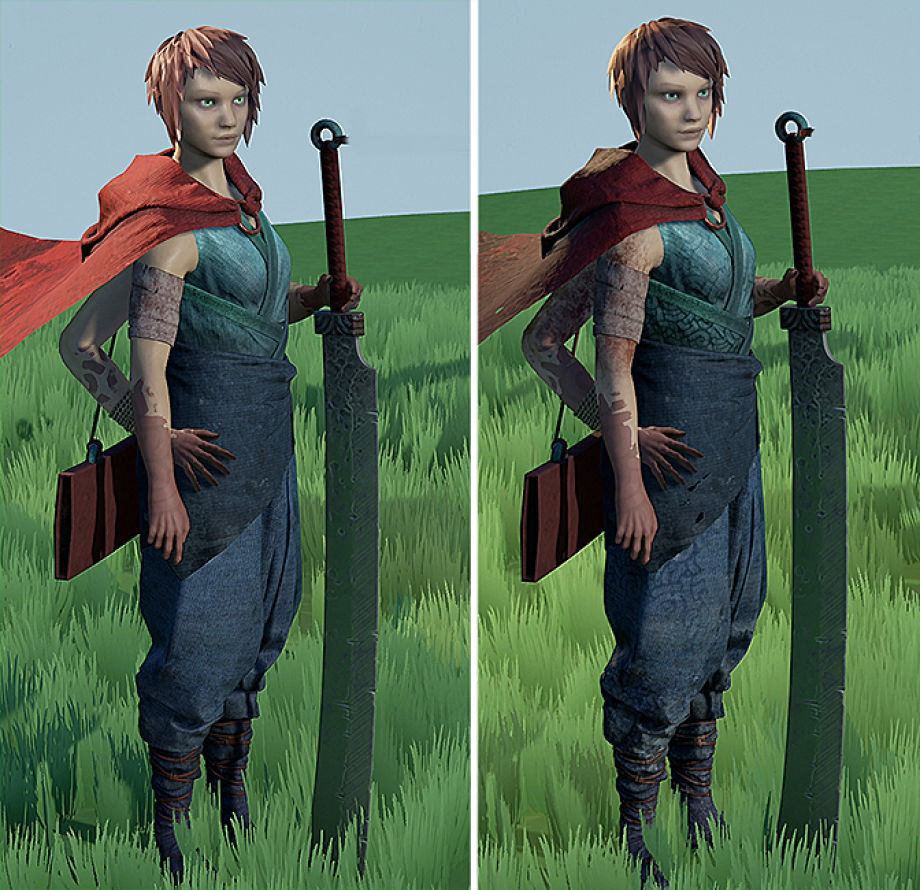 What I call polish, would be best described as taking a step back from you creation and identifying areas that need the most improvement and areas that can be improved without much effort.

This sounds pretty generalized but this dedication really shines through in the end product.

Some areas of your artwork might be very fun to do, so you might get lost and spend more time on them then is justified and other areas will be more painful but more important for the quality of the end product.

Reworking a part of your model you’ve spend hours on can be very painful, but it might be needed if you want to be serious about improving the quality of your artwork.

I work in iterations, I start of with a rough idea of the character and style I want, I gather references write down a back story.

For this character I wanted her to be a dragonslayer in an Asian inspired fantasy environment. The idea was that she just completed her training by slaying her first dragon and is returning victorious, wounded from the fierce contest.

Originally I planned on including an environment and a dragon head, but I soon realized that the scope would be too unrealistic to finish the character in a timely fashion. To let the style and clothing enforce the setting I went for a mix of realistic and eastern/anime style and used primarily feudal Japanese and Chinese clothing as reference.

As for the design of the character being more down to earth, I have to say that’s just my personal preference. I like stylish characters but oversexualized characters are just immersion breaking to me. Even though I am not creating a real person I’d like to think that she has a personality, a story, a life. Those things inform the decisions I make on the design, they make the character feel grounded and consistent. I can totally understand why it’s a trend and why artists want to create more sexualized characters and I don’t judge anyone for that, it’s just not my way of doing it.

Usually I start as realistic as possible, having a realistic base automatically gives you natural feeling proportions which is quite important to me. Trying to figure out whats wrong with a very stylish piece can be quite difficult, that’s why I prefer to start with something realistic, that way you can always fall back to your reference when something doesn’t feel right.

Even though I had an idea of what I wanted her to look like, you kind of tend to get stuck in this uncanny value during production where everything is sort of there, but the character still lacks emotion and charisma.

The best way to overcome this is posing and experimentation.

A pose can completely change the attitude and overall feel of a character. That’s one of the challenges in game art, sculpting this dead and lifeless version of a character that has to be sympathetic or intriguing in the end. In return you get the flexibility of being able to iterate over poses and animations that you wont have with a sculpted pose. 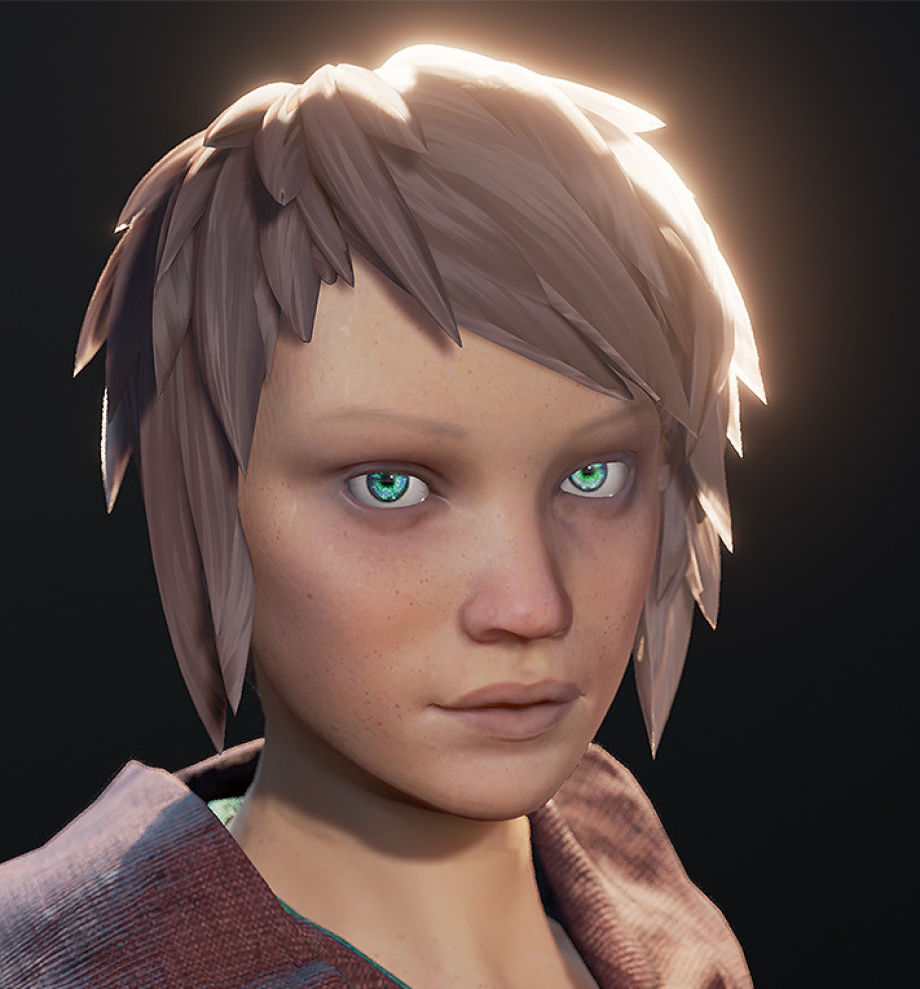 Experimenting with colors and and accessories can also make all the difference. There is a reason people spend hours shopping for just the right accessory to complete their style. We are all our own little art directors, and there is millions of them out there that you can learn and take inspiration from.

The biggest challenge for me was achieving the overall shape I wanted with simulated clothing.

I could have just sculpted it all, but I wanted to explore the possibilities of Marvelous Designer and how far it could take me, given the style constrains I set.

I quickly realized simulating all the clothing was not going to work, shapes didn’t match my expectations and folds formed in undesired places while others were left completely bare. With Marvelous you can find yourself adjusting layouts and pinching clothing, completely changing everything, but still not quite getting the result that you desire. So it is very important to take a step back and analyze if tweaking is going to be productive, if you should start over or if it’s best to settle for what you have and do the needed adjustments in Zbrush. 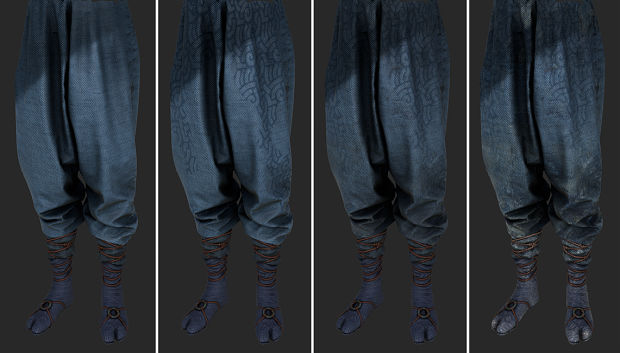 I found that getting the basics down in Marvelous and then fine tuning in Zbrush can save you a lot of time you would have spend if you created it from scratch in Zbrush.

So what I did in the end was simulating the different cloth pieces separately and focusing on the folds.

I took the individual pieces into Zbrush and used the move brush to mold them into the shape I desired and that eliminated eventual overlap.

After that, I sculpted in folds to mimic the interaction of the cloth pieces with each other.

The kimono and the shoes proved to be too challenging to simulate, so I build them completely in Zbrush.

Finding the right colors and material definition for her skin was quite challenging. Creating this almost realistic, gritty, anime look was something I hadn’t done or seen before and it really was mainly the result of a lot of iteration. Her textures where a lot cleaner and simpler in the beginning, but they felt too lifeless and alien, so I started gradually introducing more realistic features like freckles and birthmarks.

With the hair I wanted to adapt the shapes I had experimented with on my previous piece, Sir Davos, and refine it with a fitting hair shader.

I used Unreal’s anisotropic hair shader with a very stylish simple texture and to my surprise the result worked even better then expected. 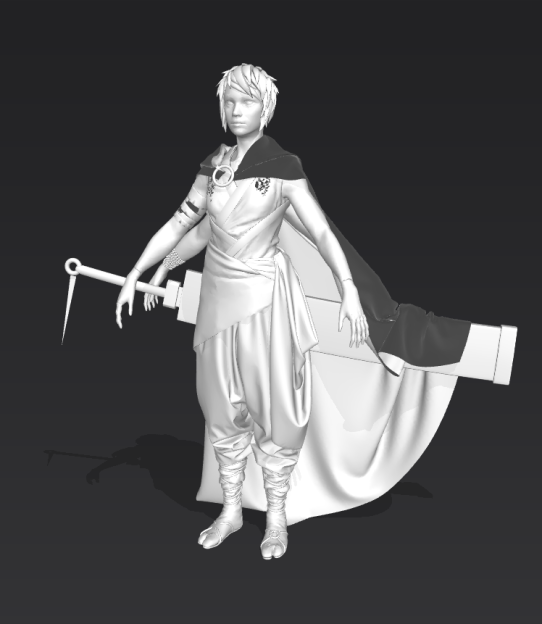 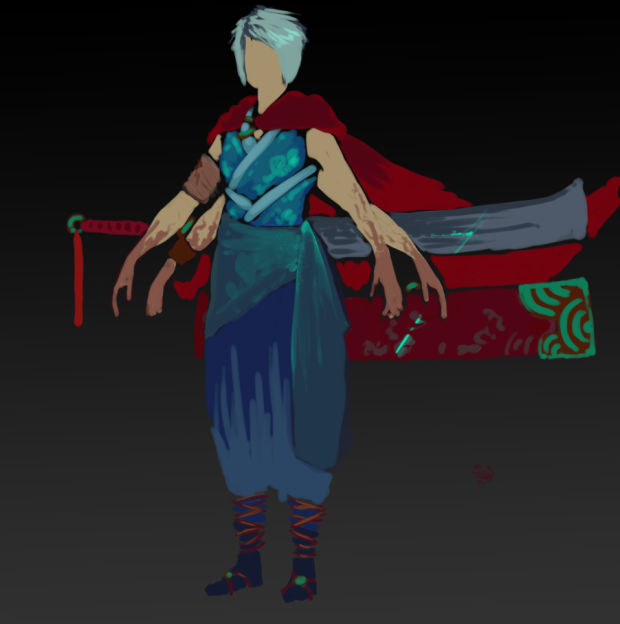 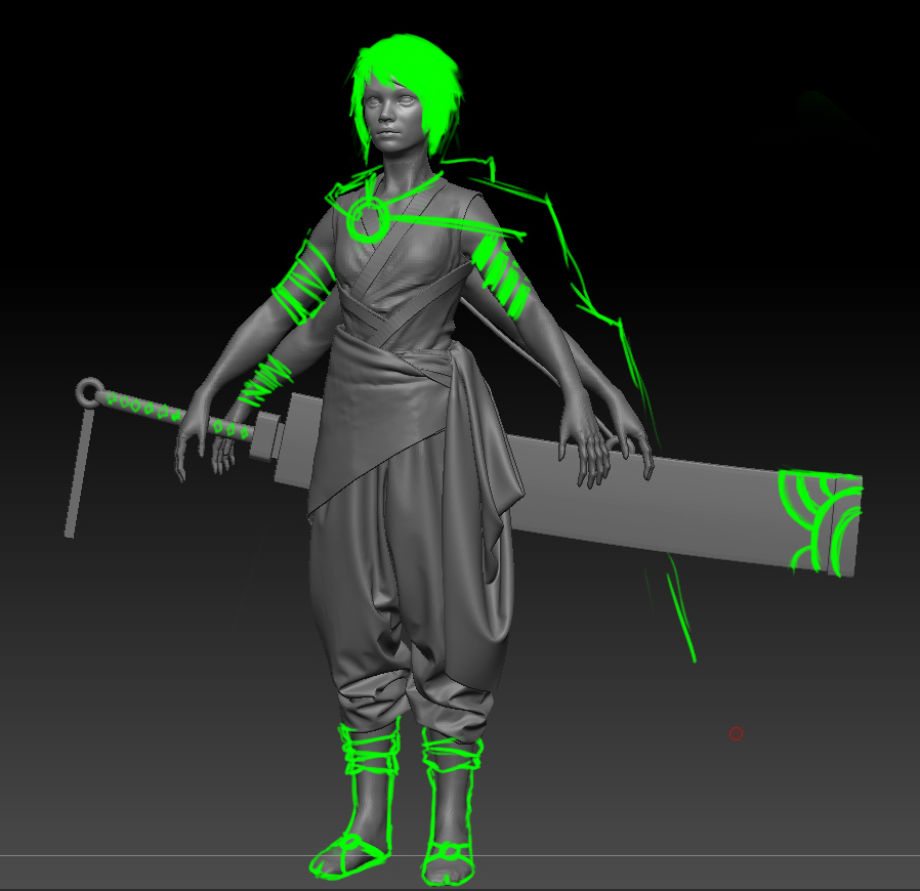 For her eyes I started with a regular photographic reference and just refined and tweaked it a lot. I iterate a lot straight in engine, using Unreal’s materials to desaturate, tint or darken colors. Often times saving out 2 different versions and interpolating between them can also be very help full when tweaking textures.

For the the clothing and accessories I used a lot of Quixel NDO and DDO. I really like how quickly they allow for iteration, trying out new ideas and patterns very quickly. While texturing I frequently jumped into Unreal to check out what the colors look like in my scene since the shading in 3DO and Unreal is very different and it can be easy to loose yourself tweaking an effect that doesn’t even appear in engine because the lighting is so different. 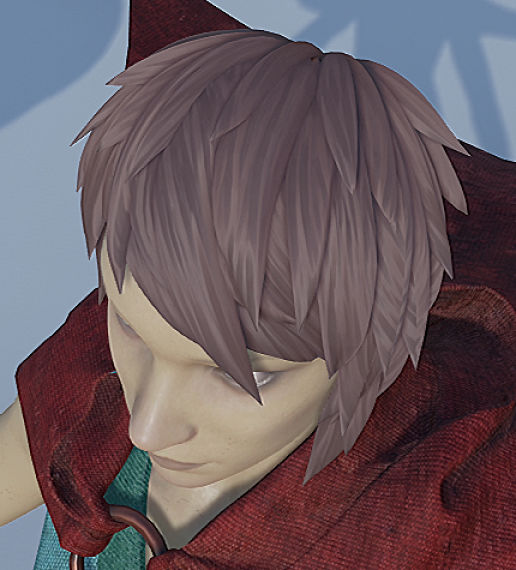 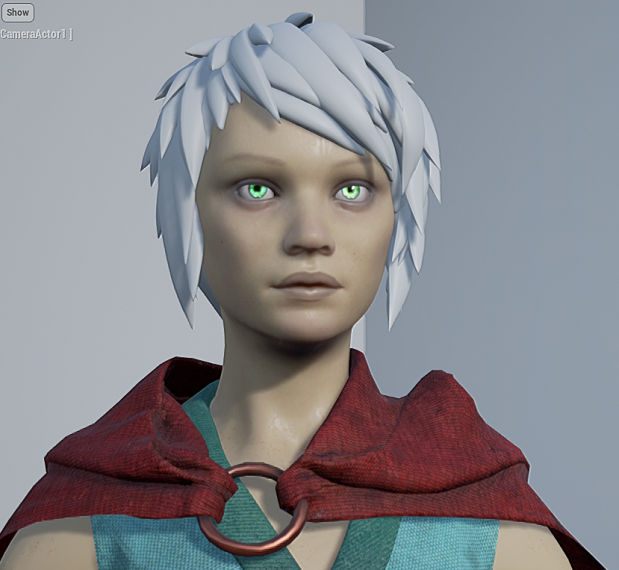 Also laying out your UV islands to align with the flow of the cloth is very important and can easily be forgotten. Sometimes it’s better to sacrifice some UV space to have the shells point in the right direction.

The most useful tip I can give is to skin, rig and pose your models yourself. It’s quite the daunting task at first, but there are a lot of tools out there that make the process more enjoyable, like 3ds Max’s Cat Rig. 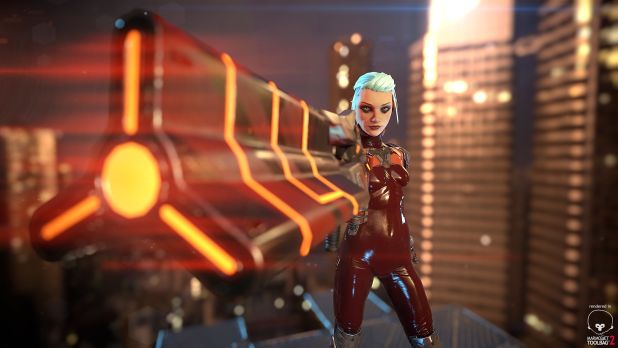 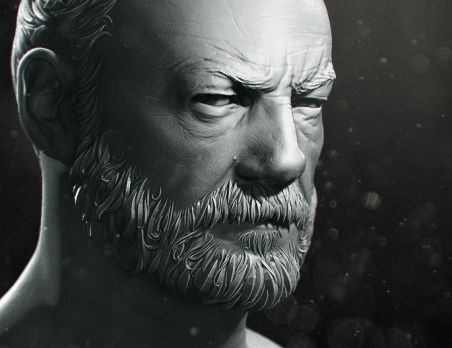 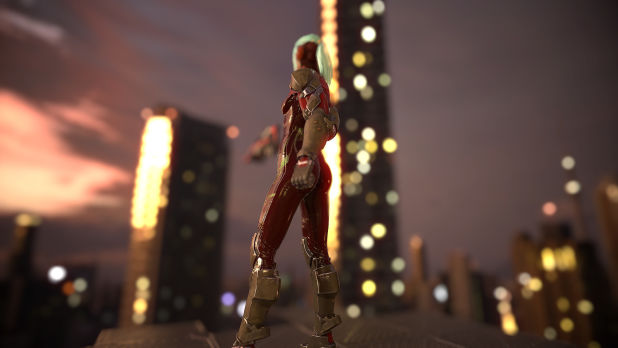 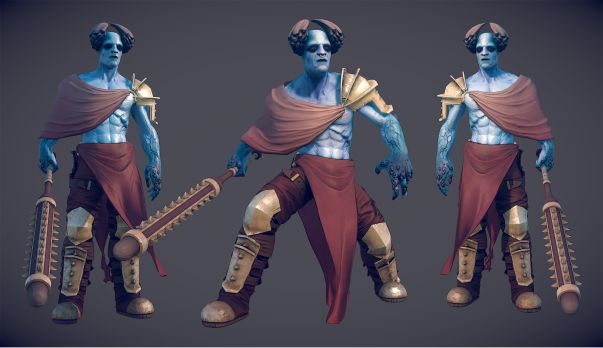 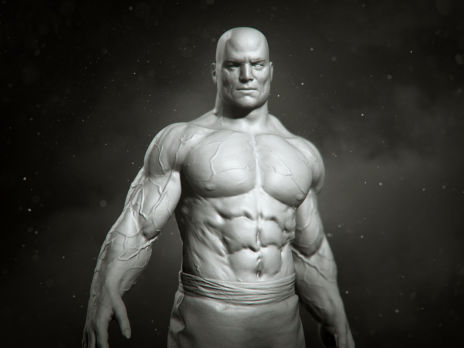 Posing the character you will quite quickly start to notice where your mesh resolution is too low for producing smooth deformations and other areas that you expected to be more challenging will actually provide room for optimization.

Also very important for clothed characters is to imitate the edge flow of the underlying figure on the clothing, if you do a good job with that you can use a skin wrap as a base for the skinning, which might save you a lot of time and headaches.