Cordell Felix talked about the production of his stunning Majora's Mask - Rebirth project created in UE4 with the help of Megascans.

Read our previous interview with Cordell

For those reading this, my name is Cordell Felix.

Since our last interview, I recently went through a layoff at the company I was at, Nexon OC. We got the news on July 17th that they were shutting the studio down. We were working on a brand new IP for 2 and a half years. Unfortunately, it didn’t work out.

Since then I’ve taken the time to finish this personal project I’ve been working on – the ‘Majora’s Mask - Rebirth’ video. Now that I’m finished with this project, I spend my free time working on a personal game project with some friends as a hobby. I’m also in talks with a new job opportunity that I am very excited about. I’ll be able to share who it’s with soon.

Majora's Mask - Rebirth: About the Project

First off, I wanted to give a shoutout to my buddy Robert Karpay, he made the music for the video. He’s looking for work, so snap him up!

I started the project in the middle of May. I only had a couple of hours every other night to work on it after working 8-10 hours at my full-time job at Nexon OC. After getting the news of the studio closure, I started to work on the Majora’s Mask video pretty much all day up until I just released it on August 14th.

The whole reason I started this project was to get better at realistic environments purely using Unreal Engine 4 and Megascans as well as learning a few other things along the way. With this project, I focused on cinematography, lighting, world-building, set dressing, story, and mood. I also learned UE4’s sequencer to record the scenes and learned Adobe Premier to put the video together.

In the ‘Terrible Fate’ video I helped work on, the entire forest environment is real footage from the Redwood Forest here in California with the CG superimposed on top of it. Since then I wanted to create my own forest 100% inside of UE4 in real-time, so I did.

Megascans allowed me to build and iterate on the scene quickly. Browsing through the assets in Megascans Bridge is really fun because it’s like going shopping with unlimited money. You can just download a bunch of assets, import them into UE4, and start building your scene right away. In this case, I downloaded a bunch of forest assets from Bridge and started to build the scene. I ended up only using a quarter of the assets I downloaded. It’s amazing what you could build in a single day or even in a few minutes using Megascans. I built the first iteration of the scene in just a couple hours in a single night and found the direction I wanted to go in soon after that.

I kitbashed a couple of assets together in the scene, like the trees for instance. Megascans doesn’t have full trees in their library (yet), so I made them really quick by combining a couple of tree scans together and used a foliage atlas to make the leaves. I vertex painted the leaves for wind and enabled the Megascans wind material on them to help make the environment feel more dynamic. 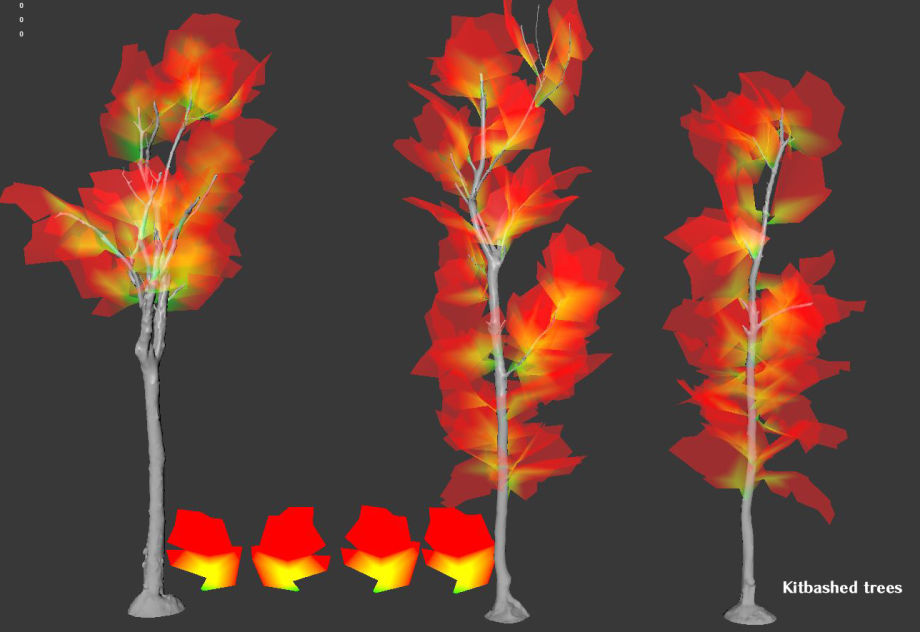 Mixer helped me do a quick aging pass on the mask with ease. I textured the mask a long time ago using the older Quixel Suite plugin inside Photoshop, so I had a base texture already with a ton of masks and color IDs I made that I could use in Mixer as a jumping-off point.

Lighting in UE4 is very powerful. Understanding the fundamentals of a basic lighting setup can get you most of the way there. Lighting purposefully is what I learned makes each scene shine. Ask yourself – what are the areas you want to pop out? What surfaces do you want to receive more light? Bumping up the roughness of a material just to make it look more visually interesting is another good trick. 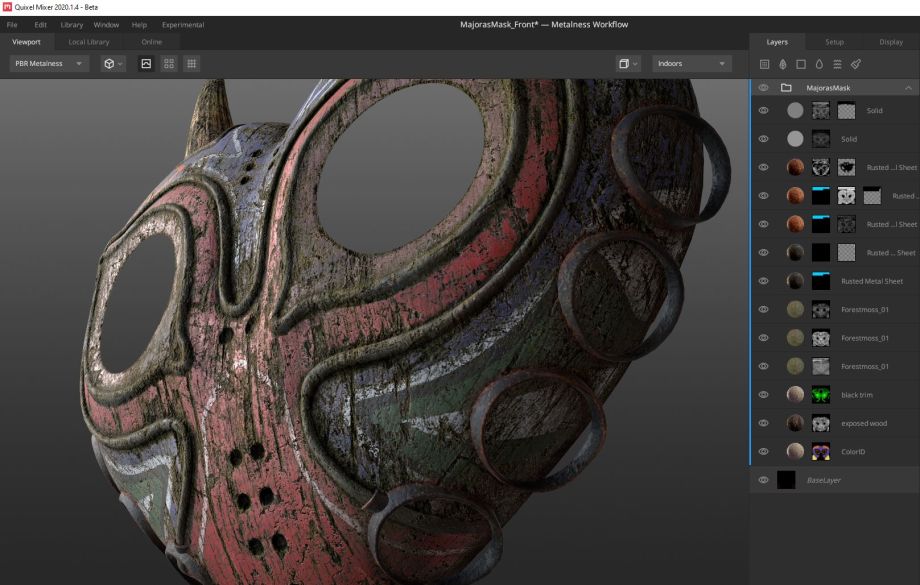 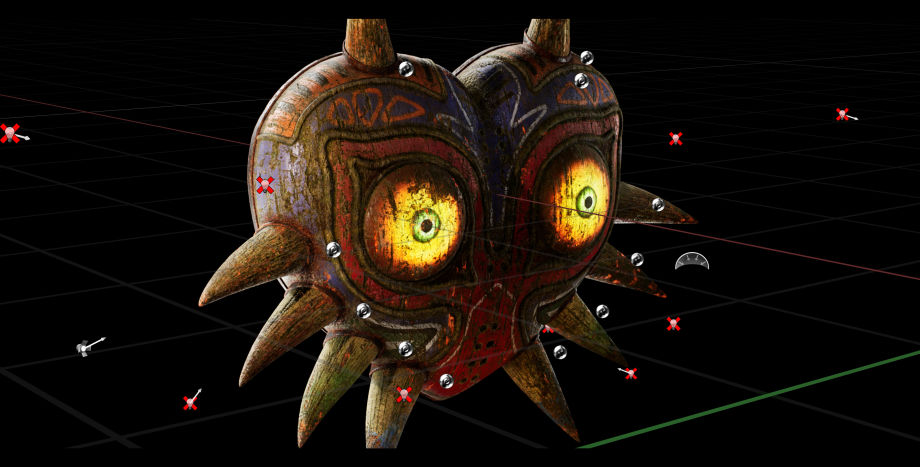 Megascans surfaces combined with Mixer helped me make the biome easily. I have a terrain shader that supports 5 textures to blend together to create a biome that I can set dress. For this environment, I wanted there to be a gradient of life to death transition. My idea here is that the mask is slowly sucking the life out of the forest, so the area around it is completely dead. Playing with the roughness on some of these materials is all I really needed to do, they are great out of the box. In some cases, I took a few scans and mixed them together to create the terrain textures. 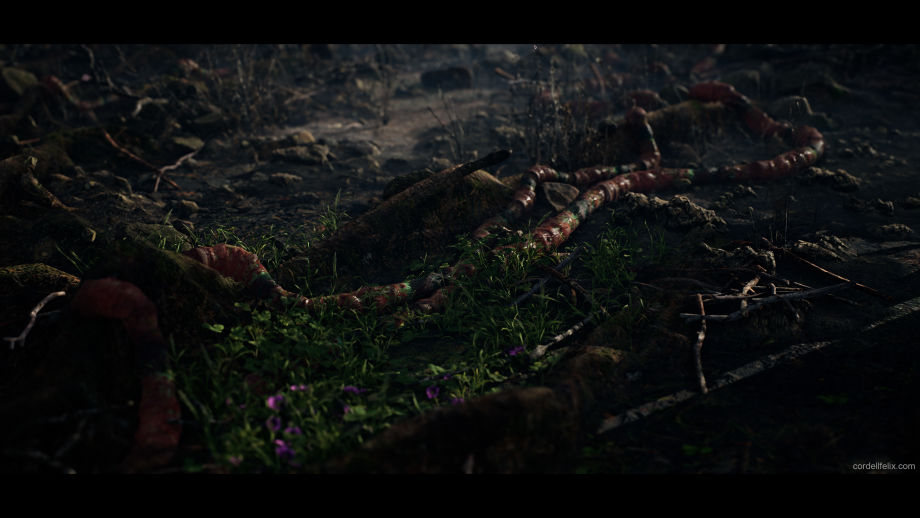 I was able to do some cool things with Mixer. The tentacles were a quick material I made using some bark scans and turning the roughness to make it shinier. Using reference from the game, I stayed true to the colors of the tentacles they used in the game. I created a spline component in Unreal so I could place and move the tentacles purely in-engine. The material displaces and pans in a direction and also has a pulsing effect (shoutout to Allar for the bit of help on that).

The lighting in the entire scene is dynamic. The directional light does most of the leg work. I did some additional lighting using a light painting technique I learned using spot lights or point lights. Light painting is essentially highlighting a few spots in your shot to forcefully make a part of your environment more interesting. In my main shot, I used light painting to brighten up the area around the mask more and to brighten the edge of the mossy stones on the right, and a couple of other areas that are in the video.

A directional light, skylight, some spot lights, and well-placed reflection captures is all you really need to get lighting like this in a real-time environment. I bumped up the cascaded shadows in the directional light a ton so everything is much crisper. When lighting, mess with ALL the lighting properties in a light actor and see what they do if you don’t already.

Here is my scene with and without ‘light painting’:

The video happened by accident, sort of. I initially was just going to make an environment in UE4 with the mask plopped into it and take some shots and call it a day. The more I worked on it, the more ideas I started to think of. I started to think of a story that would make sense and help drive the environment more so I came up with the idea that the Majora’s Mask came back to life hundreds of years later after it was defeated by the Hero of Time. The tentacles are reaching out and sucking the life from the forest around it to gain its strength back.

Learning Sequencer and Adobe Premier was daunting at first, but it is very easy to use once you learn the fundamentals, this is usually the case with anything else. I’m glad I spent the time to learn sequencer because I wouldn’t have been able to make the video as cool as it is now. Once I learned how to use Sequencer in UE4, I started to storyboard some shots on paper so I knew which shots to focus on for the video. As soon as I had the shots storyboarded, I could focus on detailing each shot to really make the environment shine. Using Sequencer, I created around 30 different camera compositions around the scene and picked the ones that fit the story best to use in the video. Composition and lighting is everything when creating an interesting video. I’m no expert in cinematography but I found spending the time to fly around my environment and finding the most interesting shots and clipping each one was the best way to go about it.

The music was incredibly important to help bring the video together. I knew I needed something that fit the mood of the environment I was creating. Robert Karpay helped me do that and created the amazing orchestral version of the ‘Song of Healing’ and ‘Oath to Order’ for the video. Getting the music to transition when revealing the Majora’s Mask was the most fun to figure out, I wanted to give a sense of evil and dread when looking at it.

Unreal Engine 4 combined with Megascans made creating this environment so much easier. I didn’t have to spend countless hours creating trees, roots, dirt mounds, rocks and so on. It’s nice to have a library of assets at my disposal that I can use as lego pieces to start making an environment right away. The iteration speed using Megascans is priceless. Unreal Engine has so many fantastic tools included that help anyone create anything they need. I now know why the film industry is starting to use it in their production, especially since you can do so much with real-time. UE5 will change both the film and game industry forever.

My biggest challenge was finding a good reason to create the environment. At first, I just wanted to make a forest environment that the mask sits in, and that was it. As soon as I started to think about a story, that story helped drive a lot of my decisions moving forward and made the environment way cooler than I had anticipated. I asked myself “Why is the mask sitting in this forest?” and that’s all I needed as a springboard.

Thank you everyone for watching the video! I loved working on all these Majora’s Mask fan arts. It’s my way of continuing to give back to the Zelda community. I left deeper meanings in the video up to the interpretation of the viewer, like the laugh of the Mask Salesman after his quote “Oh… So the Evil has left the mask afterall…” in my story, he was wrong. The cries of the Giants throughout the video, they can sense the evil coming back. I timed the dialogue of the Mask Salesman’s quote exactly how it is in the game, and a couple of other easter eggs I left in secret. The Legend of Zelda is one of the big reasons I even work in the game industry, so it’s nice I can give back by making content like this.