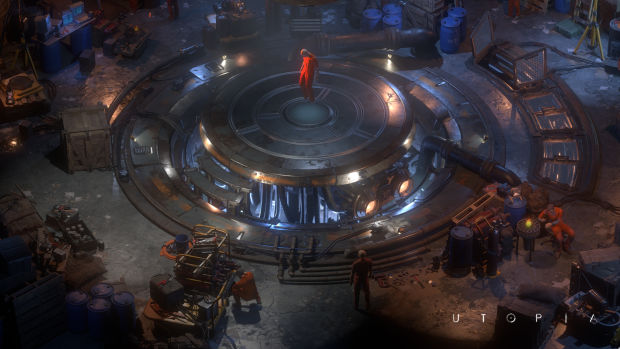 This year was quite productive! I’ve had a chance to work on several big projects, most of the time with my friends at Blur. I can’t tell you about all the projects, because some of them are still in development, but mostly it’s about building 3D scenes. Still, I can tell about some of the projects: several scenes for Star Wars The Old Republic: Knights of the Eternal Throne’s cinematic trailer and the epic final battle for League Of Goods.

I’ve started searching for ideas for Utopia one and a half years ago and I’ve been building it for the last six months. I’m working on it all the time with some brakes for commercial projects. I would say from the point of self-actualization it’s the most important project for me.

Games I grew up playing are Fallout, Diablo, Baldur’s Gate, Nox, some other RPGs and beloved quests like The Longest Journey, Syberia, Sanitarium, Dracula, Broken Sword. These games formed me as a 3D artist. I think most of the artists dream of making their own games or animated shorts. I’ve been dreaming of my project too, but due to the lack of time, resources, skills and experience, I couldn’t afford that. The industry evolves rapidly and I have enough skills to start working on a big project now. It’s great that more and more isometric and top-down games with old school visuals appear. This fact is another incentive for me. Some games are definitely worth noting – Wasteland, which reminds me of the first two parts of Fallout, Pillars of Eternity from Obsidian Entertainment and a wonderful isometric quest called Stasis from Chris Bischoff and his brother. 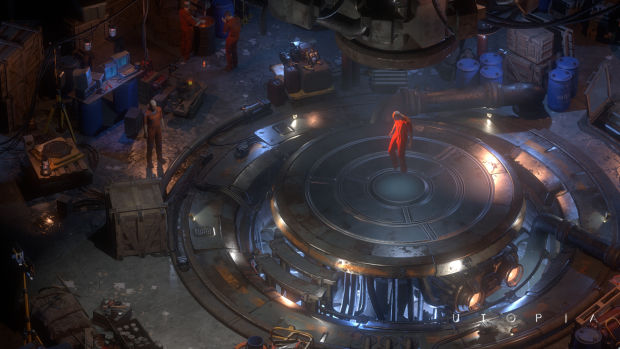 Utopia can be described as an isometric adventure or an adventure quest that features horror, detective, sci-fi and mystical elements, tons of places and levels, parallel story lines and countless mysteries and riddles to solve. I can’t tell about its story as it’s not finished yet, but I can say that the first chapter will be about a man, the main hero in this chapter, who is trying to survive and discover his own identity and the reason for ending up in the post apocalyptic world.

You can argue about the pros and cons of each game engine, but I’d say there is no sense in that. You should think about your needs and targets instead, and choose the most suitable engine.

As Utopia is a quest, I was looking for an engine that would work great with this genre. I was studying engines like Adventure Game Studio, Game Creator, Visionaire Studio – engines that would deal with programming and let me dive into storytelling and art. In fact the first prototype was developed with the help of Visionaire Studio – a great solution for Point And Click quests. Unfortunately, after six months of development, I understood that the engine doesn’t provide enough tools. I also tried Unreal Engine 4. Its interface was nice, but the engine required programming skills, which is a problem for me.

Then I stumbled upon Adventure Creator — an engine within Unity that lets you create quests without hardcore programming skills. It was easy to use and provided enough tools, so I stuck to Unity. Unity also has a huge community that can give you all the needed information and answer any question. I should also mention Unity Asset Store that has all you need for game development — models, textures, scripts, shaders, music, sound effects, etc.

At this point, my older brother joined the project, who already had some programming skills, which also influenced my decision and accelerated the development process. We are still studying Unity, Adventure Creator, writing scripts and algorithms, but I’m confident that in the near future we’ll have to deal with the programming part, so we’ll be looking for specialists in this field!

It all starts with an idea, an outline in the head and a search for references of some existing buildings, that would then be transformed into an idea according to the plot. Walls, doorways and other large objects are placed as simple shapes in 3D, change places, as a concept or an idea to form the base shape. Then the references of medium-sized objects are filling the space as a part of level design. After that, smaller parts are added as parts of level design and quests. The three steps are completed as primitive forms to see the basic design of a scene. Then we start adding all the details.

Usually sublevels don’t require a certain logic of connection as they feature old school loading process. The only rule is to remember about the plot and movement logic. Not every room is a sublevel that needs loading. Often sublocation consists of 3-5 rooms of different sizes, depending on the scenario, where the player spends a lot of time, and then the player gets to another location with 5 rooms through loading process. This model is typical of quests and doesn’t require much computer power, given that Utopia uses realtime lighting.

I mainly use 3ds Max to model assets and then add tiny details in ZBrush. The process of creating assets does not go beyond the standard rules for creating game models. High poly model is followed by the low poly one, mapping, baking and texturing. Perhaps the basic rule for all the assets is that the model should look the most realistic, with a minimum number of polygons. To bring realism we use PBR materials and standard shaders in Unity. Everything is baked in Substance Painter and Quixel Suite 2. Usually all models in Unity have 3 textures – diffuse, specular / glossiness and normal. This is enough for model to look quite realistic. 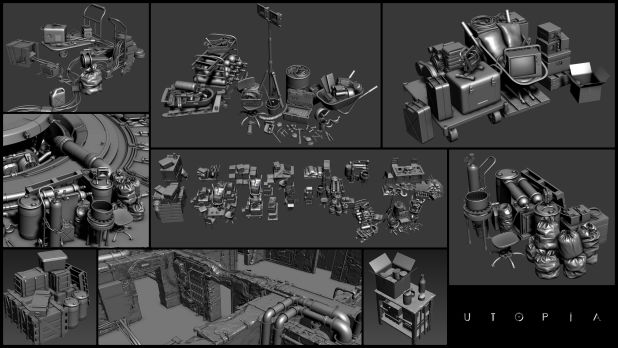 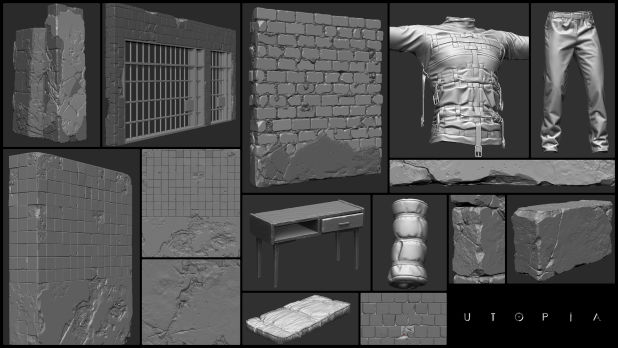 I’m sculpting models with shapes and dimensions slightly larger than in real life, somewhat exaggerated, since this is better for isometric game and at the same gives a stylized look.

The set of hard surface brushes has been specifically designed to facilitate the process of creating models in general, because thanks to this pack you do not need to dwell on the little details that tend to take most of the time. Create the general shape of the object and focus on the creativity during the texturing process. Usually this applies to models of large and medium-sized forms that occupy most of the locations, such as the platform from the teaser. First there was a basic shape, then low poly and mapping, all the little details were added with the help of brushes in Substance Painter and Quixel Suite 2. Basically brushes are heighmaps that are placed on a bump layer, which gives the volume of a model. In the near future I plan to share other useful tools to make life easier for artists and game developers, so follow Project Utopia on Facebook and VK pages. 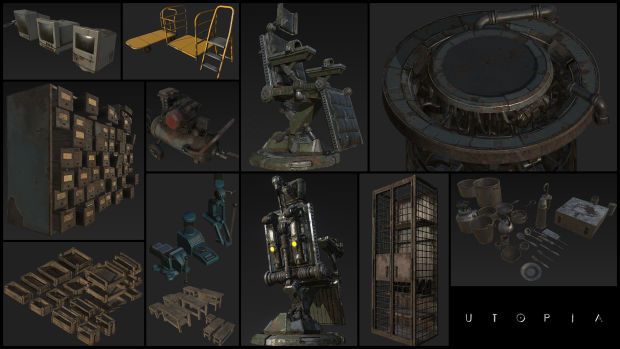 In general, it is hard to say for sure about the time for the creation of a particular location due to the fact that the project started recently with a concept teaser, but we are talking about months. Creation of the teaser, which is essentially a part of the game level, from the idea to its implementation, took approximately 2.5-3 months. And perhaps the most important was the fact of its creation, we got tons of info about the engine and software, and solved many questions concerning technical stuff and animation. To create character animation, I used the motion capture system from Perception Neuron for the first time. 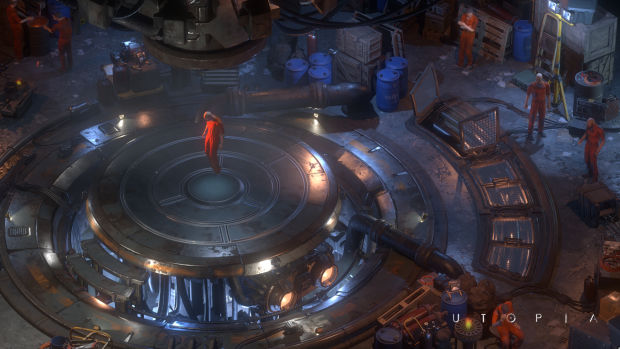 As I mentioned before, my older brother Oleg is helping me with programming part and some of my friends, who also found the project interesting and exciting, are helping me with visuals. I want to thank everyone who helped and participated in the creation of Utopia! As Utopia is growing and as it is planned as a huge project, we will need other professionals like concept artists and level designers, animators, writers and 3D modelers.

This is probably one of the most difficult questions for me because this project is the manifestation and the realization of my ideas, fantasies, emotions and my work in general, and the embodiment of all that! And to acquaint others with the idea of Utopia we are planning to release a demo version of the game! 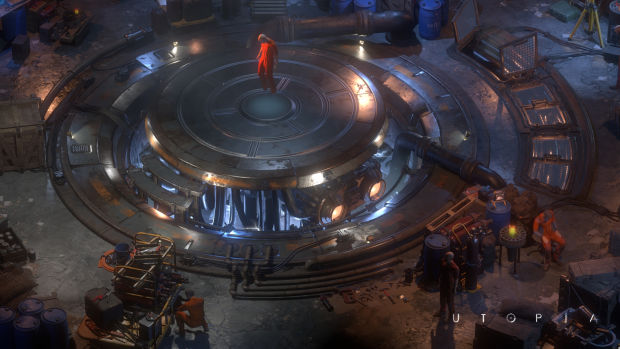 To be realistic, for the full realization of Utopia, we will need funding, since now the financial side of the project lies completely on me and that affects the family budget. To fill the plot with excellent visuals, atmospheric levels, effects and realistic animation, quality voice acting and other things we certainly need help. And whether it will be Steam Greenlight, crowdfunding like Kickstarter, some sponsor or a publisher, now it is not important! We just want to make all the adventure and quest games’ fans happy.