Ben Burkart worked on Brothers in Arms Hell’s Highway, Damnation and created a number of maps for the Unreal Tournament games. He has an incredible gift of creating vast and detailed maps in Unreal Engine. Last year this skill earned him the first place in the Torn Banner contest organized by the developers of Chivalry: Medieval Warfare and a $10k prize. Most recently Ben was working with Unreal Engine 4 on an unannounced secret project. In this exclusive post for 80.lv Ben gave some recommendations on creating levels for multiplayer games, talked about the advantages of Unreal Engine and the way he got into game industry by asking Cliff Bleszinski how much he earns per year.

I initially became interested in level design as a full time career at the age of 12 when somebody gave me a copy of the original Unreal Tournament. I do not recall exactly how it happened but I ended up stumbling upon the level editor and quickly became fascinated with it. Above all the thing that stood out to me and fascinated me the most was the idea of creating my own levels. The authors names were under the properties of each level in the game and because I was so interested in level design these people in a very large way became my role models even though I had no idea who they were.

One name that appeared on several of my favorite maps was Cliff Bleszinski. I knew nothing about him other than that he made a lot of my favorite maps and that I also wanted to become a level designer so I set out to contact him. I sent an email with one single question “How much money do you make a year?” I was not aware that this was rude to ask, I was just a clueless kid in the country who wanted to make video games… I received a response that simply said “3 billion“. I do not remember if I actually believed him at the time but it was enough to make me excited to push forward with making levels. After making levels for a couple of years I got my first phone interview at Nintendo at the age of 15. I do not know what they saw in my work but I was told that my work stood out to them and it was all I needed to hear to push myself to getting my first job in the industry which eventually happened in 2007 at Gearbox Software.

At Gearbox Software I worked as a level designer on Brothers in Arms Hell’s Highway. They had an amazing cog program that really helped me get my foot in the door initially. After Gearbox Software I worked at a studio named Blue Omega Entertainment where I worked on a game called Damnation. I came in towards the end of the production of Damnation so my responsibilities were more in the direction of polishing the levels and improving upon the multiplayer maps in terms of both layout and visuals. 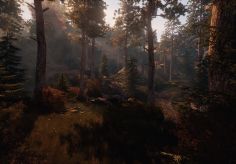 After Blue Omega I started at a small indie studio named Trendy Entertainment working on Dungeon Defenders1/firstwave/second wave, and Dungeon Defenders 2. I stayed at Trendy Entertainment for 4 1/2 years and then got a job at Empire Studios working on an unannounced Unreal Engine 4 title. Overall my responsibilities in each studio were generally the same with the exception that I was given more responsibilities as I became more experienced and I eventually took a lead level designer position at Trendy Entertainment. Responsibilities at each studio generally came down to creating the level layouts and bringing them to final visual polish, including gameplay passes, decoing the levels, lighting them, and in many situations optimizing and finalizing them.

The Best Tools for the Level Designer

I use Unreal Engine 4 for one very important reason, it empowers its users. One of the most important advantages I believe Unreal Engine has always had over other engines is a superior workflow. Tools are always robust and empower the developers to save hundreds of hours of development time even over the previous Unreal Engine 3.

In Unreal Engine 1 and 2 if a level designer or artist wanted to do some fun scripted stuff that the code didn’t currently support they would need the help of a programmer. With the additions of kismet and Blueprint the engine has basically upped the possibilities that a developer can pull off allowing for not only quick prototyping but also quick implementation, bug fixing, and overall just general production.

The most important thing when it comes to game engines is that they allow the developers to do what they want. The less time you spend fighting technical stuff and trying to get buggy software to work the quicker you can get an amazing project finished. And for this reason I have stuck with Unreal Engine since 2001 through all of its iterations.

Generally a level designer can get away with knowing nothing more than the Unreal Editor and still be an amazing level designer. However several level design job positions will require some knowledge of 3D modeling software such as 3ds Max, or Maya so I would suggest learning one of these as a secondary skill to at least an intermediate level.

If you are just starting out I would definitely suggest putting all of your time and effort into only learning UE4 to start off as it can easily be daunting all by itself. Companies will prefer somebody extremely efficient in UE4 vs somebody who is mediocre in both UE4 and 3D modeling.

The Tricks of Building Levels in 3D

It is always important to have a goal and purpose for your level, deciding this early on should influence how you make decisions regarding layout/visuals/balancing through every step of your levels creation. When preparing to design your level you should have a clear indication as to what kind of visual theme you are going for as it should influence your layout as well as allow you to get the right assets together or to get a better idea of what kind of assets you are going to need.

The way you approach multiplayer maps depends very heavily on what type of multiplayer map it is going to be and what game it is being developed. Let’s imagine you’re building a DeathMatch level for an arena game such as Unreal Tournament.

Flow is above and beyond the most important thing in any multiplayer map, while the other things on this list have a possibility of not breaking the map if they are done somewhat poorly your map will always fail if your flow is bad.

As with most of the things on this list the Item placement in a map can make or break your layout.

Any good Death Match level will have multiple floors/stories. Having several overlapping floors makes the gameplay a lot more interesting as well as exciting.

Spawn points should never be obvious to other players or be marked visually to allow players to camp and spawn kill players. Level Designers should place a minimum of 2-3 times more spawn points throughout the level than the player count its designed for, for instance if your level is designed for 4 players you should be placing a minimum of 8-12 spawn points in your level. Make sure spawn points are set so that players are spawned facing in an interesting direction or towards a nearby weapon. The sooner you can get the player back into the action the better!

One often times overlooked feature most newer level designers overlook is using sound cues to trigger at specific spots in a level when a player runs over them. This allows players to hear where other players are at and react to the sounds they hear. A few simple ways to do this are, placing water puddles, creaking boards, clanging metal, etc.. In the case of games such as Unreal Tournament you should also use some of the health pickups in this way such as a health vial that makes a very unique sounds when picked up. Also if you have a level with several lifts/elevators it helps giving each a unique sound effect.

Any competitive multiplayer game should have two things in common, good frame rates, and a very good visual clarity. Levels should be lit very well and player pathways should be extremely obvious and clear. Overall maps should be mostly devoid of noisy details as you want the players to stand out from the environment. Generally when it comes to making multiplayer maps it pays to under deco vs over deco your maps. As much as a lot of people enjoy making their levels a visual masterpiece players will often times pick the more simple maps with a better layout.

Most games will have something that makes them unique. As a level designer it is your job to ensure that players are made to use these unique abilities often. For instance, in Unreal Tournament 4 players have the ability to dodge off walls, climb ledges, lift jumping, piston jumping etc… So giving players areas cool areas they can only reach by jumping at the right time at the top of a lift would be a good example of taking advantage of the gameplay mechanics.

The overall size of a map doesn’t always play into the final deciding factor on if it is easier or harder to create as it all depends on what the overall goal of the map is and how detailed each will be but generally a larger map will come with more challenges. For instance, making a giant MMO style map that is mostly open spaces with very little detail will for the most part be easier to create than a full city block that’s 10X smaller with 100X the detail. However, creating very large maps will have their own unique challenges, such as performance and memory restrictions. Things that are generally easier to maintain in a smaller map. However in some instances creating larger environments may be easier, but they are also easier to mess up and generally take a lot more experience from both the level designers and artists to get right.

In the next post Ben Burkart will talk about Visual VS Gameplay and the difference of designing levels for single player games.