Lorenzo Trionfante took part in the Environment Artist Bootcamp at Game Art Institute and did a breakdown on his amazing project that he created during it.

Check other works from GAI students 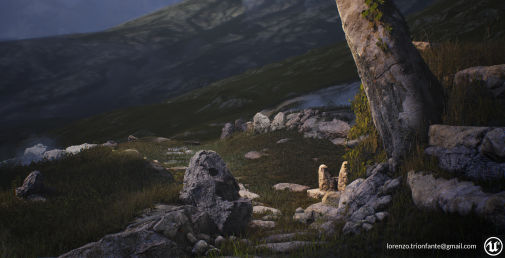 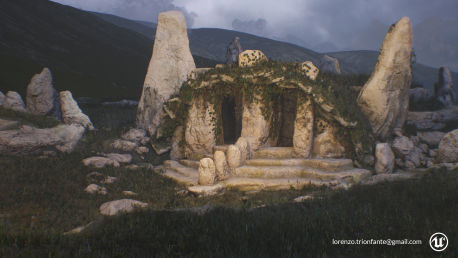 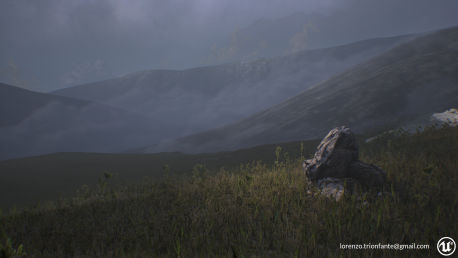 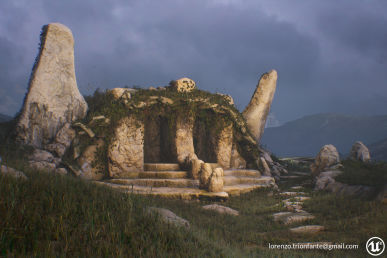 I'm a level designer working in Italy, at Milestone. Since I was a kid, I was always fascinated with 3D and level design for games. I played with the creation kit, CryEngine and the hammer editor, and my dream was to transform the landscapes I designed on paper into real playable games for other people to buy. So I enrolled at the university here, in Italy, that promised me just that, with a side of cinema and general media design. But then cinema and post-production became the main focus, so I decided to focus on composition color and lights, trying to translate the notions from the real world to game engines. Unreal Engine became my ally alongside CryEngine. But I found myself lacking in the fundamentals I needed to realize my visions. So I enrolled in GAI Environment Bootcamp, mentored by Ryan Kingslien and Tyler Smith.

About the Environment Bootcamp in GAI

I started the Bootcamp with Ryan because I was already familiar with him since Uartsy. I was almost totally self-taught, but I hit a plateau in my learning experience. I enrolled in the Bootcamp searching for a new system, a new approach to work and practice. And that’s the main thing I learned. Having the right workflow, the right mindset and a focused project to test them (with awesome mentors to guide you) really open up your mind to your work. It also helps you determine the quality of your work with a rational critical eye, not an emotive one. I could see my improvements with my own (new) critical eyes, and now just after 3 months, I found the job I was looking for. I think that says it all. 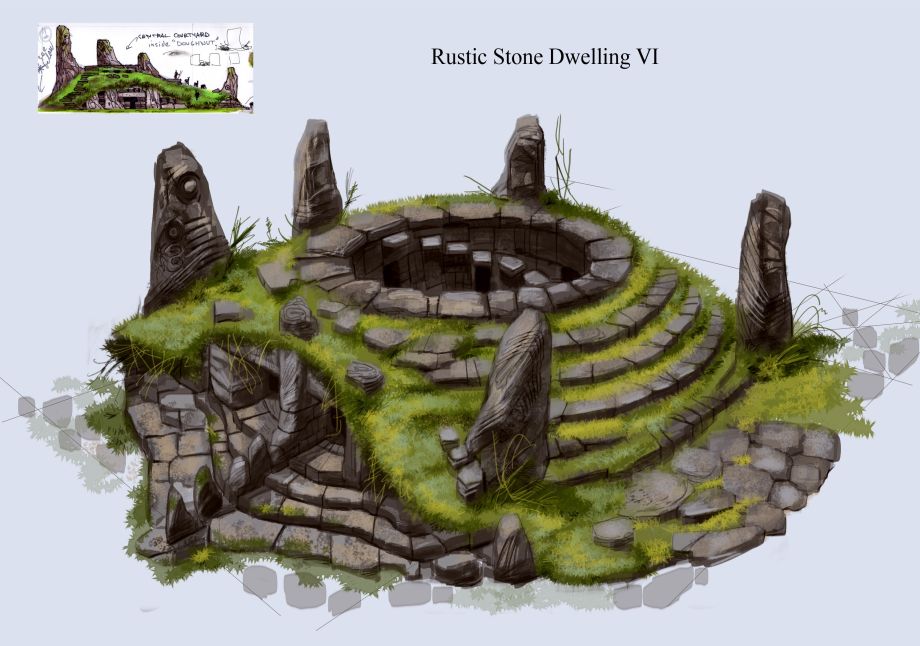 I always admired Adamovicz's work. I am a long-time modder for Bethesda titles (starting with Morrowind), but I usually tackled small projects like weapons and shields. I wanted to part with the past, so I took the concept (alongside some other ones from his Flickr collection) started recreating the small scene with modern tools. I have already worked with Unreal Engine, so I and Ryan decided to push the concept in a more realistic way, taking advantage of the power of the engine and trying to push the visuals of the new engine with an "old" concept from an old hero of mine. 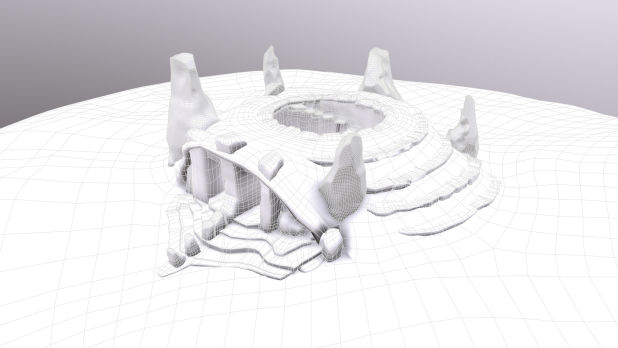 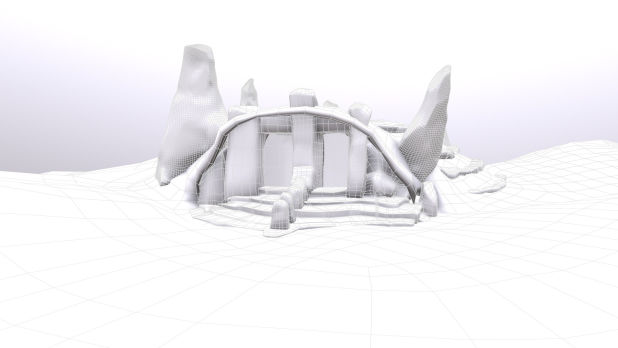 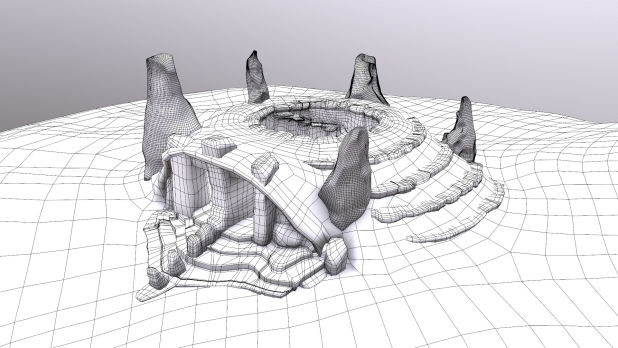 The main focus of the project was the implementation of the Substance Designer in my workflow. So I modeled the main architecture in Maya and added details only with textures painted in Substance Painter, using materials created in Designer. The only rocks that were sculpted and baked from high to low poly are the small props around the main area, but I used only the baked normal blended with the materials from the Designer directly in the engine. This allowed me to rapidly iterate on the look and feel of the project, Substance and Unreal are almost seamless.

Except for some slowly moving cloud planes, everything in background is a 3D landscape. I really wanted to have the complete control of the shot, so I gathered references from Scotland and Norway, very fitting for the mood and look of the concept, and realized the landscape in World Machine. From there, I exported a heightmap and a color map. The heightmap was fed to the landscape tool so that I could sculpt some more details and have final control on the shape of the hills. The colormap instead was used as a material I.D. for the landscape material. This, together with my tiling materials and a function to break the albedo tiling, gave me rapidly a natural look, and rapid iteration to test different looks and colors. 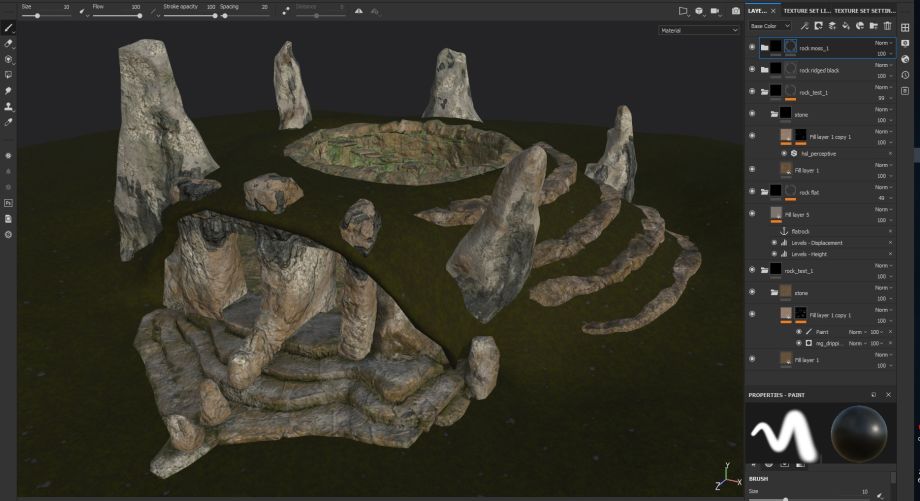 I'd say the key to a good looking organic texture is controlled randomness. Nature and organic forms are chaotic by nature but always follow the rules and patterns sometimes. Once you find them, you just have to try to reproduce them in Substance Designer. It's just the best tool for the job, perfect to control primary secondary and tertiary forms, individually. All of that plus the procedural workflow helps you to achieve what you need, whether that is imitating the natural erosion and fracturing of the rocks or controlling where the moss grows. I don't have a favorite noise pattern, I like to tweak the common cloud noise in various ways if possible from the same source node, keeping memory usage low and being able to create different materials just by inputting a new seed. 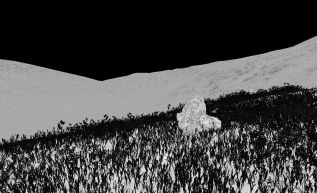 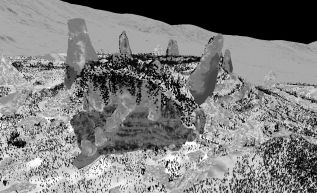 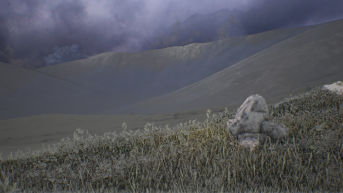 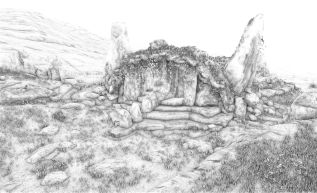 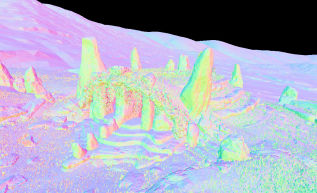 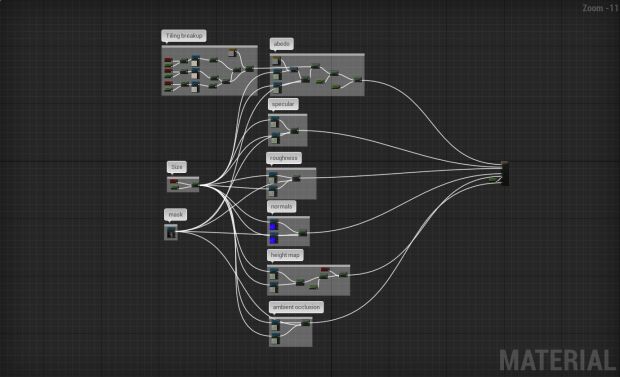 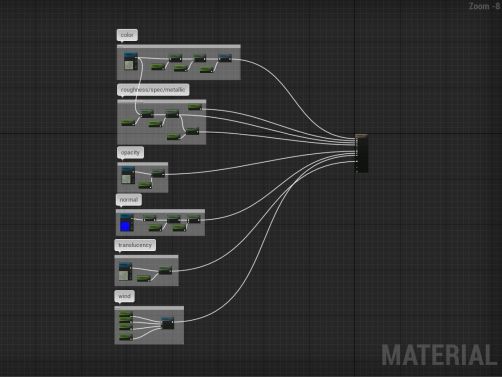 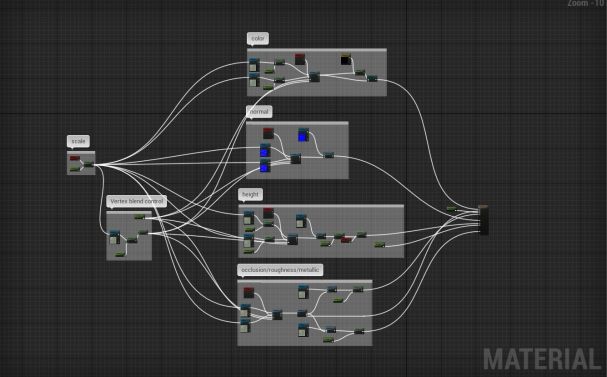 Master materials are Unreal's big thing. Being able to create the main material with control parameters and share in with multiple material instances give you great control over the look of the material, and changing the values in real-time is the key to rapidly see what works and what doesn’t. It also allows you to break the monotony and repetitive look of vegetation. The color variation node is really handy for that. For the main terrain, I used three different materials heights blended in one shader. Then, instead of painting with landscape layers, I used vertex painting to paint out the different materials on the terrain. 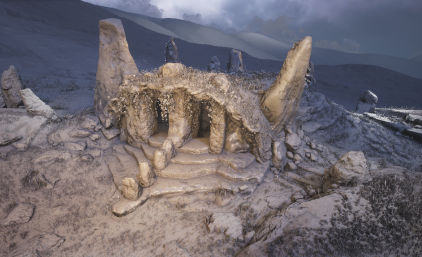 The look I was trying to achieve was a mixture of some shots from Valhalla rising (as composition guide) and Odd Nerdrum's paintings. High contrast, limited and earthy palette of color. I thought to myself that the lights had to represent the rebirth, a passage of some sort. That led me to create a very dark and rain-based light pass, shattered by some spotlights faking sunrays emerging from the thick clouds. I was pretty happy to see the materials react in a perfect way: having a true albedo color as a color texture does wonder. 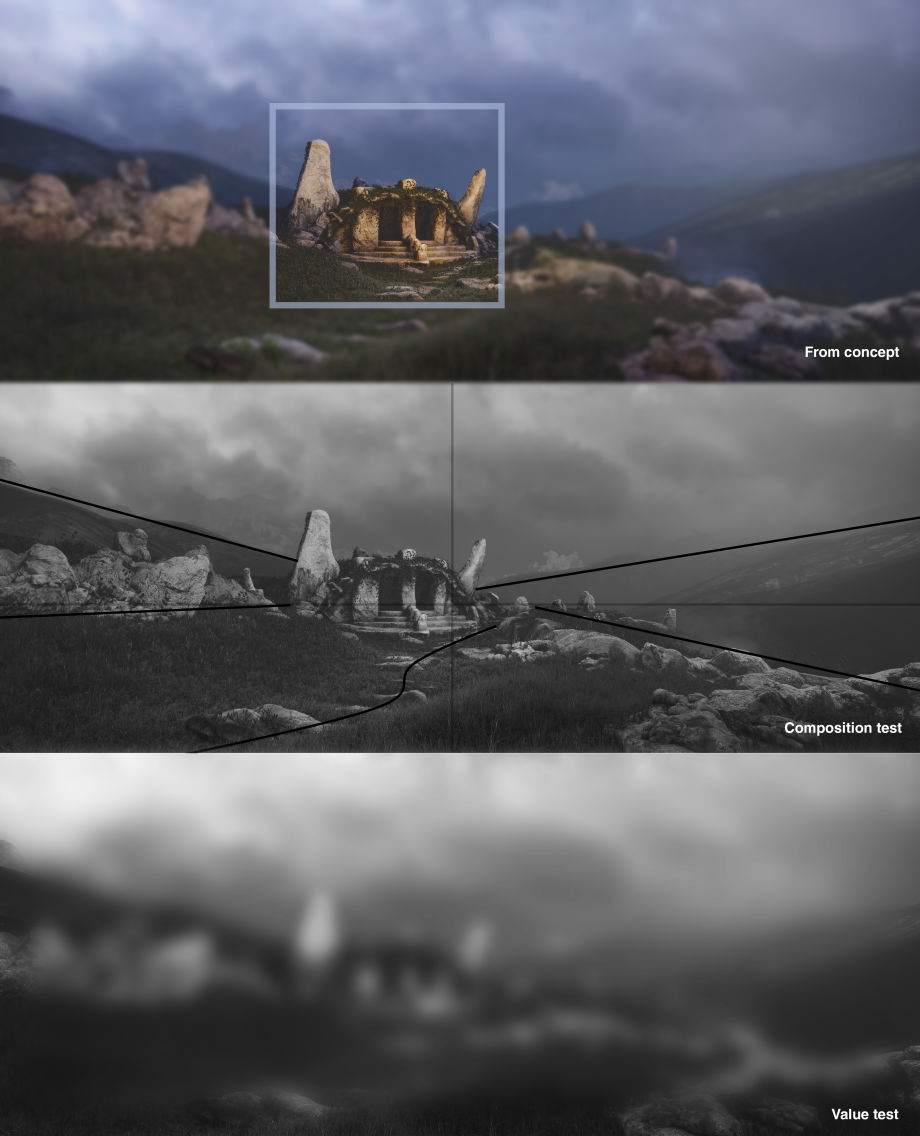 Cameras are an old friend of mine.  By shooting many short movies, I became accustomed to the main rules of composition: the rule of thirds, contrast, value, and visual force lines must be the core of your project. I explained it a bit in my breakdown, but I can tell that the most important thing is to plan ahead. I had my cameras set up since the block-out of the projects. This helped me in maintaining the focus and direction, plus being able to see the project development from a fixed point of view gives a positive morale reinforcement, making you work in a happier mood.

I think the biggest challenge for me rewiring my brain to a new workflow. Unfortunately, I found out that a big part of my workflow was outdated and plain out wrong, but the guidance of Ryan and Tyler really opened my eyes. It's time for me to leave this piece behind, but now I know where to improve and, most importantly, how to improve in the best and fastest way. I think art is a marathon and not a run. You cannot reach the finish line with the wrong technique. Luckily, the mentors and the community of Game Art Institute were there to help me.

Check other workd from GAI students