Rostislav Nikolayev is one of the finalists of the incredible visualization contest Vineyard Challenge, which was held some time ago by

Rostislav Nikolayev is one of the finalists of the incredible visualization contest Vineyard Challenge, which was held some time ago by Ronen Bekerman, Epic Games and NVIDIA. The artists (teams and individuals) were asked to create beautiful vineyards or wineries and render them with Unreal Engine 4.

Rostislav actually started working with Unreal Engine 4 only a couple of month before the competition was announced and he had virtually no finished projects with this engine. However, his architectural experience and great knowledge of 3DS Max allowed him to build the scene, which actually grabbed one of the prizes (a smashing GeForce GTX TITAN X and a some dollars).

In our interview he talked about his productions process and game some advice on how to approach the creation of great virtual environments with Unreal Engine 4.

I’m an architect by trade. I graduated from the Nizhny Novgorod State University of Architecture and Civil Engineering (NNGASU) and my job is actually creating and planning buildings.

Unfortunately when I got out of my alma mater there was literally no work and no money. I struggled to get a decent position and began to study different methods of architectural visualization. Soon I figured out that you can actually make real money with this line of work and it became my second job.

I did a couple of projects to fill my portfolio and started looking for a job in Moscow. I started as a freelancer but pretty soon moved to the capital and worked in the office for 2 years. Now I have my own studio which does all kind of architectural visualization. 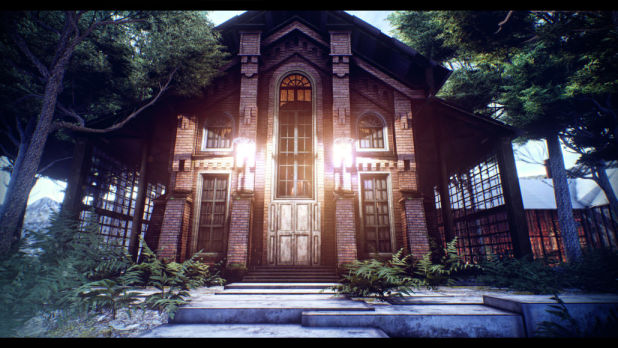 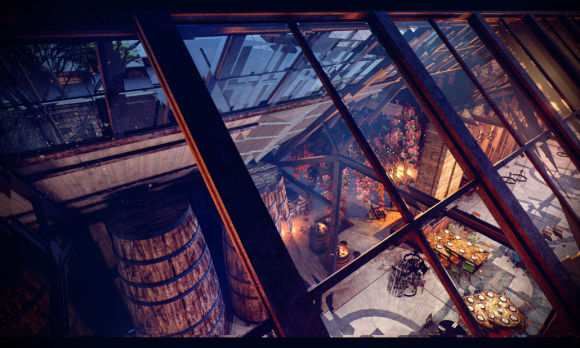 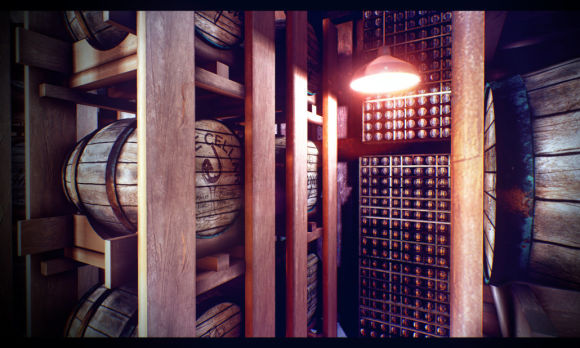 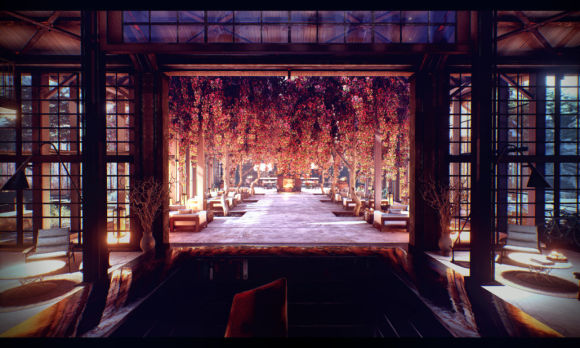 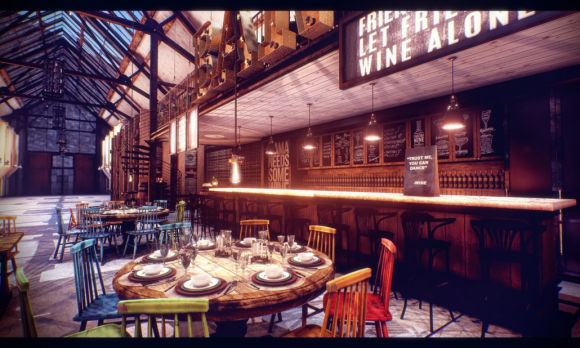 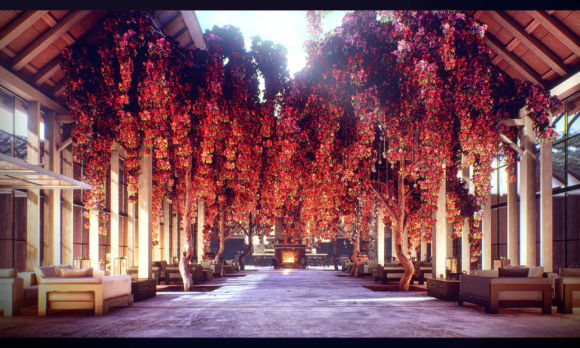 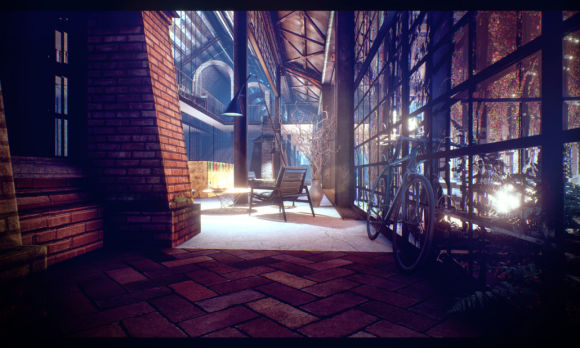 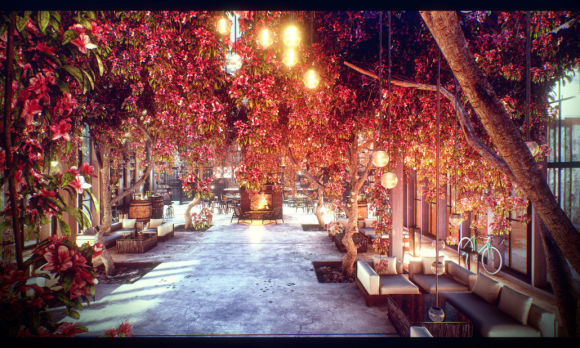 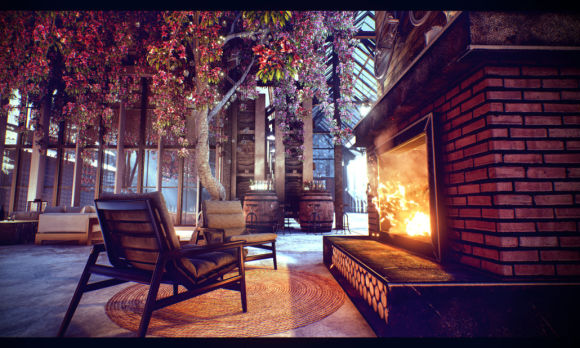 About a year before the competition I learned about Unreal Engine 4. A friend of mine kept saying that this is “the real deal” and “the next big step” in architectural visualization. He encouraged me to study this engine. I was reluctant to do so, cause I was pretty lazy and resisted till the last minute.

Having learned about Unreal Engine 4 becoming free and having a look at the “Boy and The Kite” demo I finally decided to try it.

The biggest thing that really amazed me was the ability to see the final result. You can create everything in real time and see the whole picture. I really needed that feature in 3DS Max. That’s when I started to work on my next project: transferring a small cottage scene from 3DS Max into UE4. I faced a lot of challenges, solved a lot of problems but sadly didn’t really finish this project.

A few month later I learned about the Vineyard Challenge and decided to try out my skills in a “real architectural battle”. The competition looked very interesting. It was international and it was hosted by Ronen Bekerman, which is absolutely amazing. The prizes were great too. So before this competition I had literally NO finished projects in UE4! I had very limited experience working with the engine, but I had a lot of ambitions and decided to go for it.

I was lucky to have my old friend and teacher Roman Stes by my side. He helped me with my questions and problems.

Ureal Engine 4 is different in terms of modeling. You don’t really model anything in the engine. It’s just a construction tool like a LEGO assembling kit. Before you start doing anything with UE4 it’s important to prepare all the assets. Then it’s much easier to do.

The other important thing is to have a detailed plan, so that you could see how everything will look together in one scene.

You can easily make a bunch of models in 3DS Max, check the geometry, cut some details, render the whole thing and keep editing till you get the necessary result. It’s pretty flexible. However in Unreal Engine 4 everything is quite different.

You need to have the exact plan, having the right geometry and all that stuff. The ideal situation would be to have the whole scene ready in 3DS Max before you start working with UE4. However I was really pressed for time and couldn’t do that, so I worked on two scenes simultaneously: one in 3DS Max, the other in UE4.

3DS Max scene was sort of a huge storage, where I had all the objects. I did the optimization there, tried them out and then exported the whole thing in Unreal Engine 4. Having this architectural background and really no experience with UE4 I still treat the engine as a visualization platform but I believe that I will soon learn how to build the whole project in UE4.

I have one general approach that guides me in architectural visualization: start big and end small.

When I started working on the Vineyard Challenge location I had a detailed plan of the location and the approximate plan of the surrounding landscape. I made sure it was easy to divide this scene in separate areas and continue working with separate zones independently.

What I did next was to create a small chart, placing the zones in a special order: from the most important to the least important. This is a great way to plan your work and assess the general scope of the project.

Here are 4 steps that I took while working on each area of the project (it’s the same for every 3d project really):

I sketch the buildings, the general shots of the camera, sketch out the general composition and separate shots.

Now it’s time to build the rough model of the building and work on the scale and composition. Everything should look exactly like on my sketches.

Final step is probably the longest and the most time consuming. I finish the whole project down, add details and fill the scene with the smallest things that bring life into the project.

I’m smitten by the ability to see the result immediately. If you’re like me, I really encourage you to check out the Speed Level Design in Unreal Engine 4 videos. It’s pure digital magic. I wouldn’t recommend using Unreal Engine 4 without 3DS Max though. These tools really complement each other.

Still there’s a lot of stuff you can improve in Unreal Engine. This platform has a very difficult material setup. You have to memorize a whole bunch of nodes even for the most basic operations with frenel. Sometimes you need to wait till the program works out the main lighting and gets rid of the nasty spots.

I hope with time I’ll be able to solve these problems much faster.

I actually had a lot of experience working with lighting during my ArchViz days, so I had little problems setting up the right lighting. As usual I started with the general lighting and moved to smaller lighting sources.

I chose very beautiful “setting sun” lighting and cold blue sky light. All the other light sources are purely decorative. All the lighting is completely static in this scene, so there were no conflicts or problems between different lighting sources.

It took me two whole month to build this scene. It took about 4-5 hours a day (+ studying the completely new program). Usually it takes me much more time to do something as big as this.

One of the biggest challenges was figuring out the new geometry. It took a lot of time to learn more about unwrap and Quixel Suite.

Sometimes I could transfer about 2-3 objects in the scene. I found the high-poly model, optimized it to the limit and changed some things. Then I made a normal map in xnormals and later created the texture in Quixel.

It’s a pretty long and tedious process but it gives you an opportunity to get your details right without hurting FPS. You can actually learn more about this here. 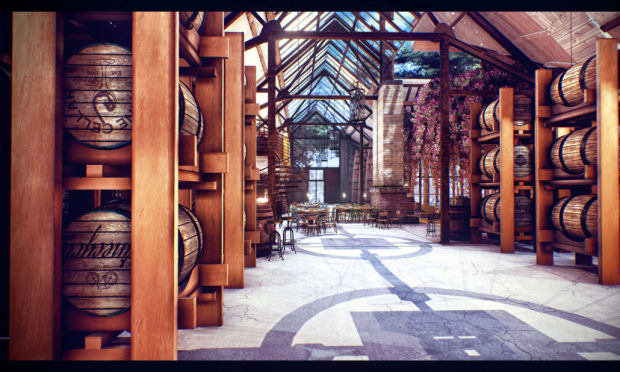 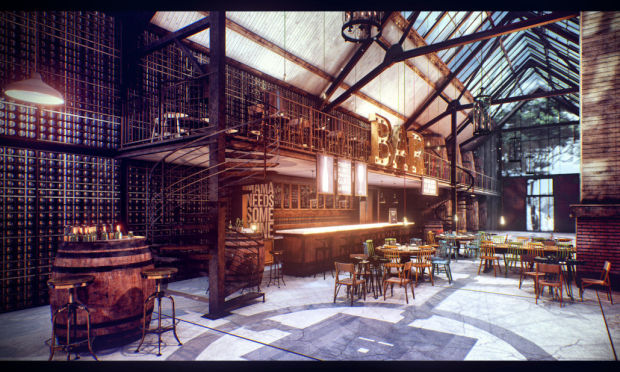 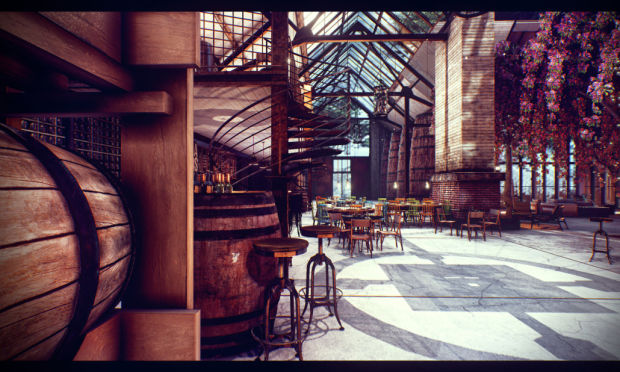 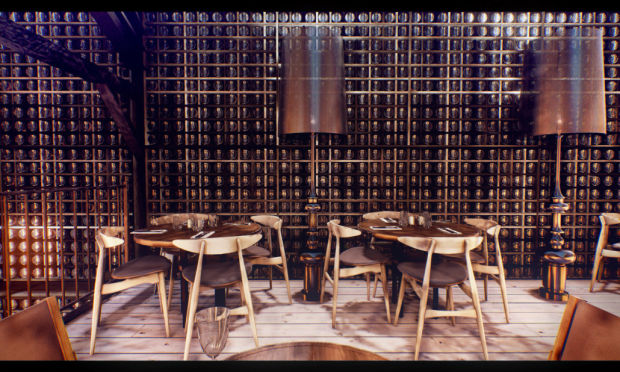 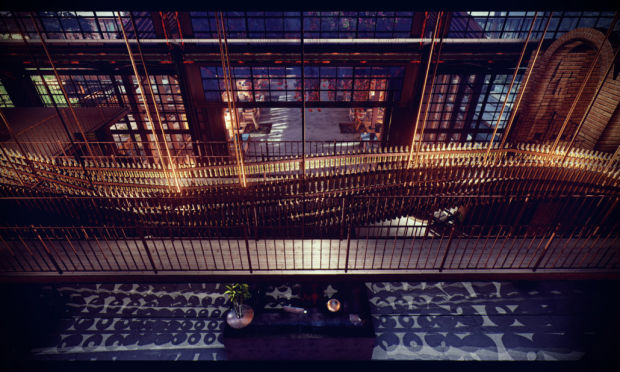 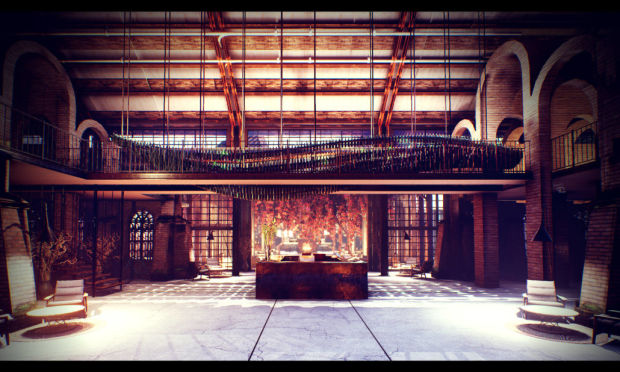 Like with any work architectural visualisation requires very high quality control. Before you start work on the project you should definitely think about your own skills and the advantages/disadvantages of the software you’re going to use.

My previous experience working with Unreal Engine 4 showed some problems in the vegetation department. There were some problems with realistic lighting as well. That’s why I decided to concentrate on the cool interior design of a large building. This way I managed to hide various faults like bad shadows and incorrect lighting.

Another great way to save time is not to get into too much details while developing the interior. Don’t waste your time on small things. Try to figure out one big feature and make it the star of your scene. Such an approach will let you create a memorable project and hide the little problems you had.

Remember to add more details to the interior. It’s fun to look around and study the environment. It’s always nice to make these details personal. For example, I really like bicycles.

Be sure to check out the website of Rostislav’s visualization company.

Russian version of the interview