Ibrahim Abdo did a breakdown of his atmospheric little diorama End of Solitude made with Maya, Substance Painter, ZBrush, and Marmoset Toolbag.

Ibrahim Abdo did a breakdown of his atmospheric little diorama End of Solitude made with Maya, Substance Painter, ZBrush, and Marmoset Toolbag.

Hi, my name is Ibrahim Abdo. I’m 36, originally from Syria but currently live in Novi Sad, Serbia. I’ve worked at Eipix Entertainment as a Senior/Lead animator for the last 5 years.

I’ve always had a passion for video games and animation which led me to become an illustrator and 2D animator and to get a bachelor degree in art (Visual Communication major). In order to pursue my passion, I started making flash games in 2002 and had to learn a little bit of scripting to accomplish that. This led me to work for multiple video-games and animation studios in the Middle East. I became an art director for one of them and a co-founder of a design studio.

When the war broke out with all its unfortunate and inhuman events, I had to leave everything behind and start a journey that first brought me to Cairo, Egypt. I was fortunate to work in an indie mobile game studio there until the situation in Egypt got worse and I went to Serbia. There, I started working at Eipix Entertainment.

At Eipix, I worked on many Casual and HOPA games such as Dark Parables and Mystery Case Files series, as well as some R&D projects involving VR and comics. I also worked as a storyboard and cinematic artist for multiple indie games such as the remake Outcast: Second Contact remake and Fell Seal: Arbiter’s Mark.

I always like experimenting with new tools and curiosity drives me to try different things such as 360 painting. Last year I started dipping my toe in the 3D environment design.

I am a big fan of Diablo, WoW, and Blizzard’s environment style in general which inspired me to make this diorama.

At first, I wanted to design an environment that reflected a mixed feeling of gloom and hope. Being a storyboard artist in the past, I strongly believe that one of the main elements in environment art is the visual story. We see that clearly in Hayao Miyazaki’s works: most of the backgrounds in his movies tell a story on their own and communicate a struggle between nature and technology.

The first thing that came to mind was this cold bedroom in a tower-like structure under the moonlight, yet comfortable and surrounded by everything you need, from books to a bathtub and a comfy bed. I did a couple of sketches and started designing the concept. 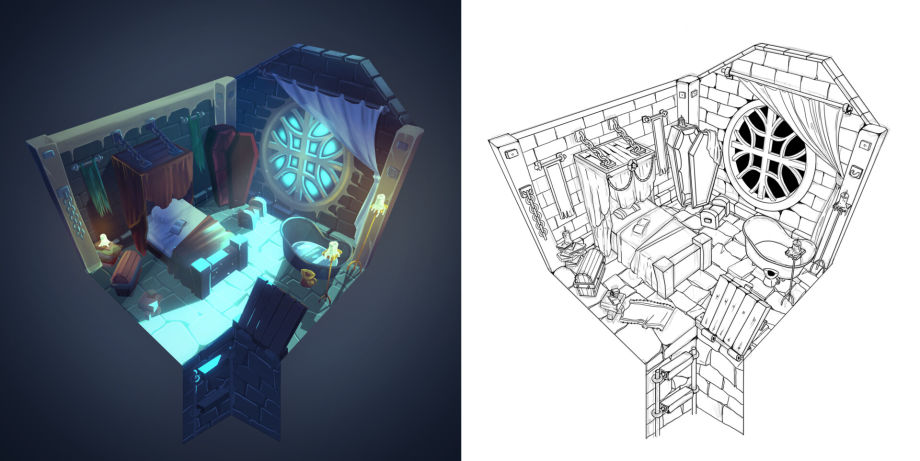 During the process, I moved towards intensifying the feeling of loneliness by adding the telescope and showing that the character always observed the outside world. The coffin symbolized the fact that he/she was ready to stay isolated until the end of life. There are also three crows: one nasty crow is “screaming” at the other two which hints at the cruelness of the outside world. To avoid a fairytale vibe, I added an alchemy circle showing that the character can be involved in some shady business. However, the story has a happy ending: the door is wide open showing that the character has suddenly decided (while reading a book on the bed) to join the world. I intentionally made the exit point tight and claustrophobic hinting at the thought that the first steps might be uncomfortable.

Here are some references: 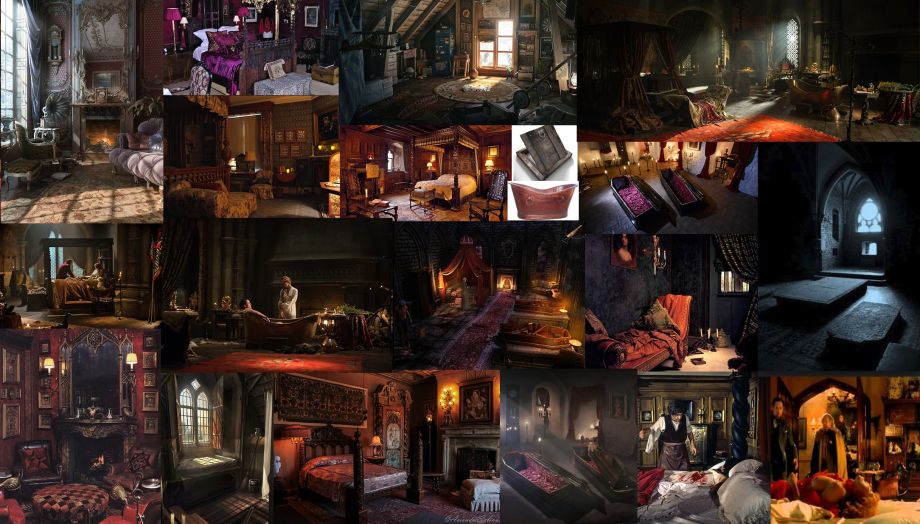 Figuring Out the Scene

My initial idea was to work on a 2.5D scene where I would just model the low poly and paint the textures right over the diffuse in Substance Painter. After a couple of tests, I found out it was a wrong approach. Then I thought of creating a camera-based UV and using it as a guide to paint over it. Later I could use it as a texture projection. Quickly, I realized that I must not approach the project as a 2D artist and the best way would be to sculpt every element in the scene and bake the high poly result over the low poly. There had to be no short-cuts.

I started with a simple blockout created in Maya. 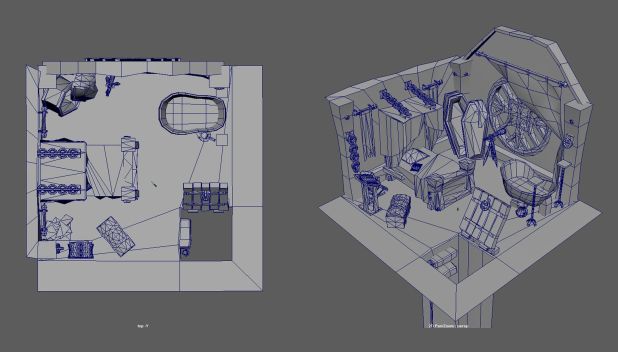 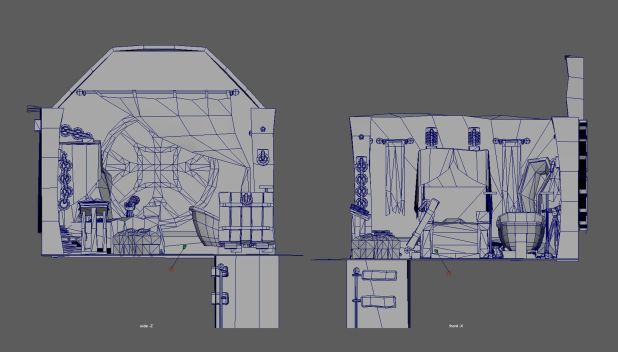 Next step was to import the blockout mesh into Marmoset Toolbag, to set the basic lighting and color mood. I used a Spot for the moonlight and 4 Omni lights: 2 for the candles and 2 for the ambiance. 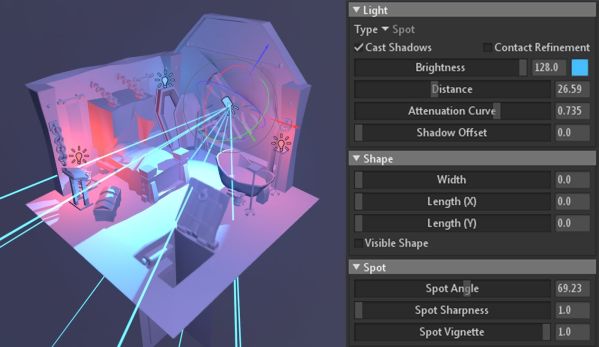 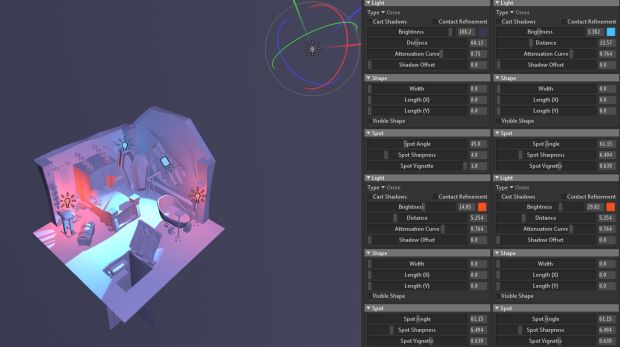 With one flat Albedo color for the material: 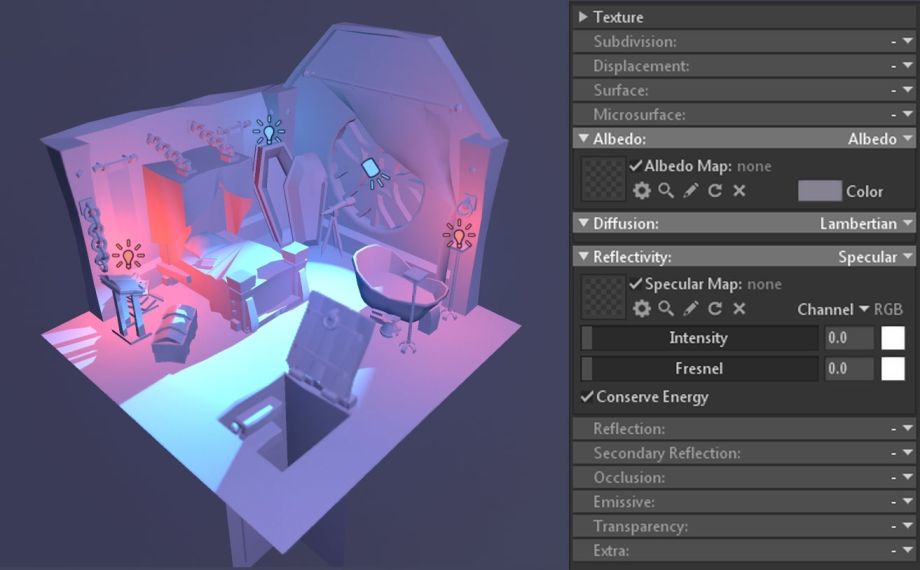 After that, in Maya, I started preparing the elements for sculpting by adjusting the mesh, adding support edges and smoothing. For better performance, I separated them into multiple groups based mostly on materials such as wood, metal, mud, etc.

Each group was imported into ZBrush and crafted separately. I found this approach to be more efficient since you work on each material type at a time. My approach to sculpting was the following: I used Dynamesh with a heavy textured brush to add the first layer of details, then flattened and polished the surface and trimmed the edges. I tried to work on the details in a stylized way and avoid getting sucked into detailing each element too much since the overall scene would be presented in an isometric view. I kept it simple and mostly used the default and Orb brushes by Michael Vicente.

Before exporting each element, I decimated the mesh for better performance.

While working on the high poly I started adding new elements and removing others since the final picture of the scene became clearer in my head. 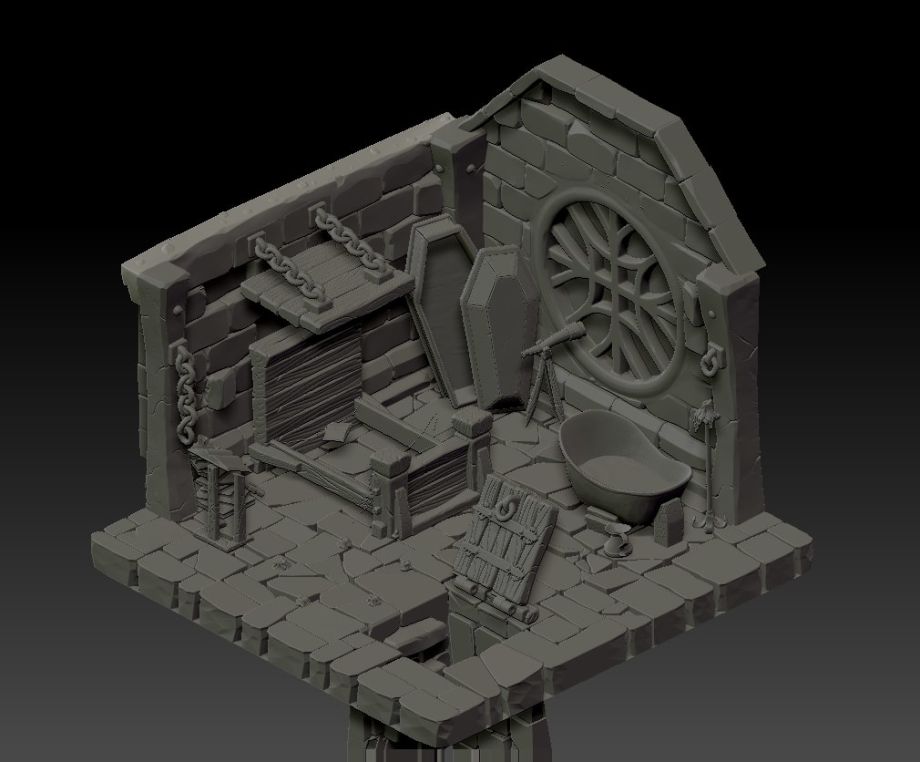 One of the big challenges in the project was fabrics, such as the baldachin and coffin upholstery. These pieces were made in Marvelous Designer detailed in ZBrush. It was my first time using MD but I found it user-friendly and easy to navigate. 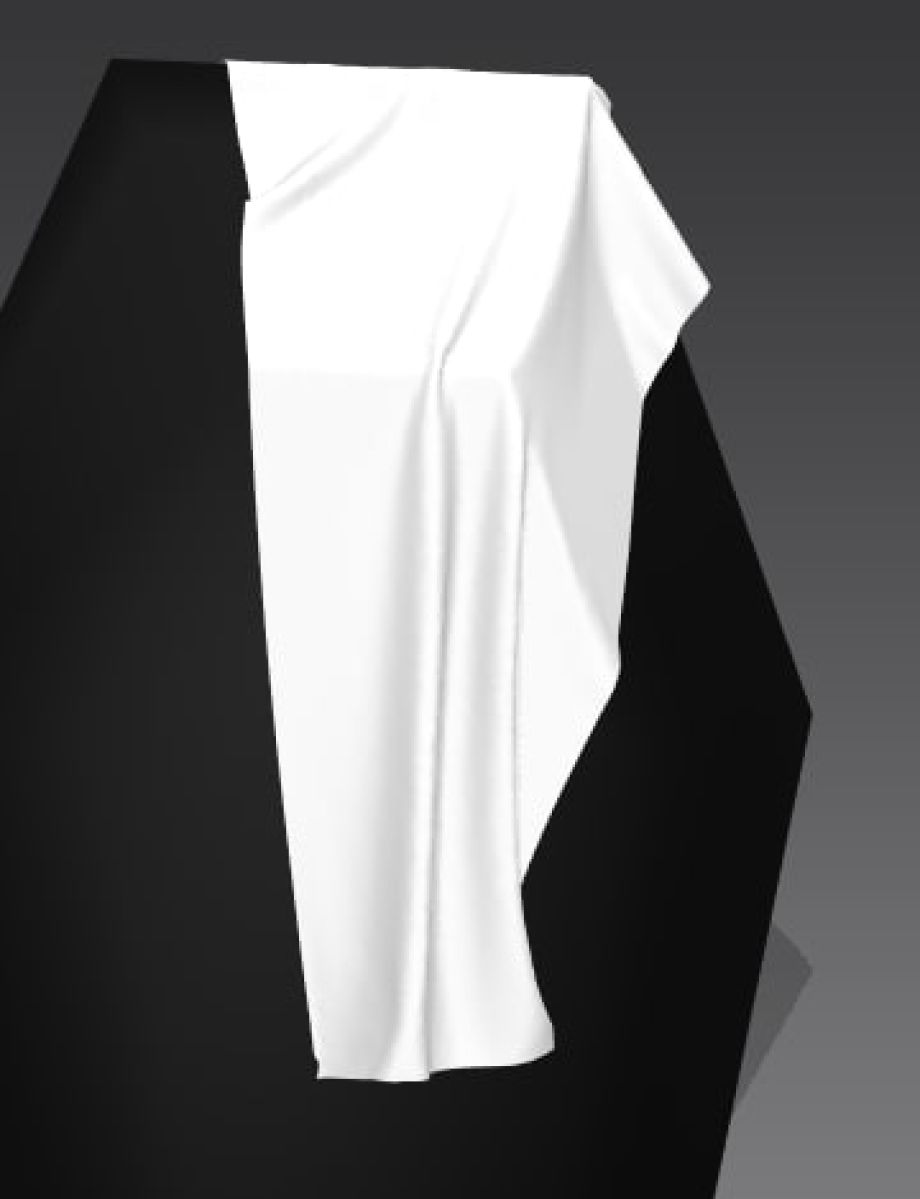 When working on the coffin’s upholstery, I found it easier to add it piece by piece, pinning the top and bottom edges, increasing the elastic strength of the lines, and adding pressure. When a piece reached a proper shape in the simulation I froze it and moved on to the next one. 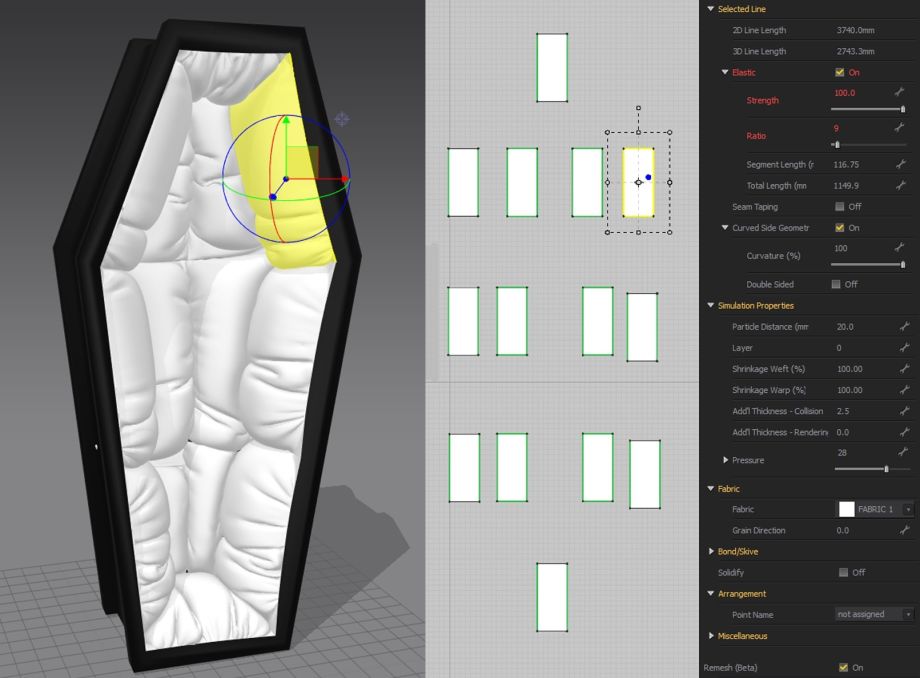 Before exporting the final result I checked the Remesh checkbox which changes the polygons into quads with a proper geometry flow. 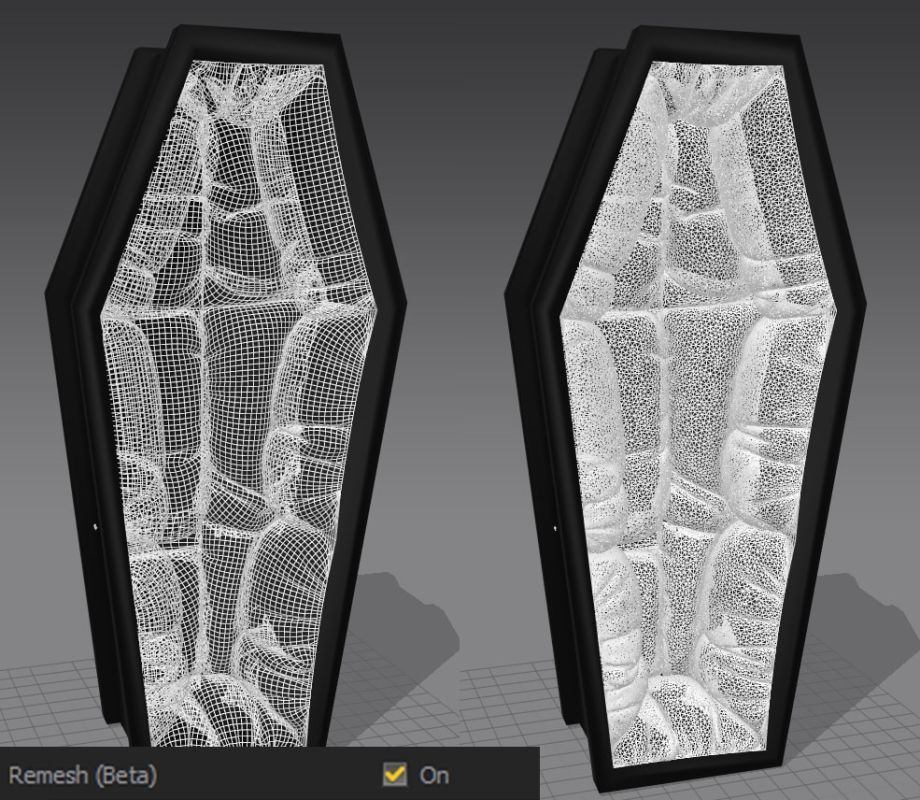 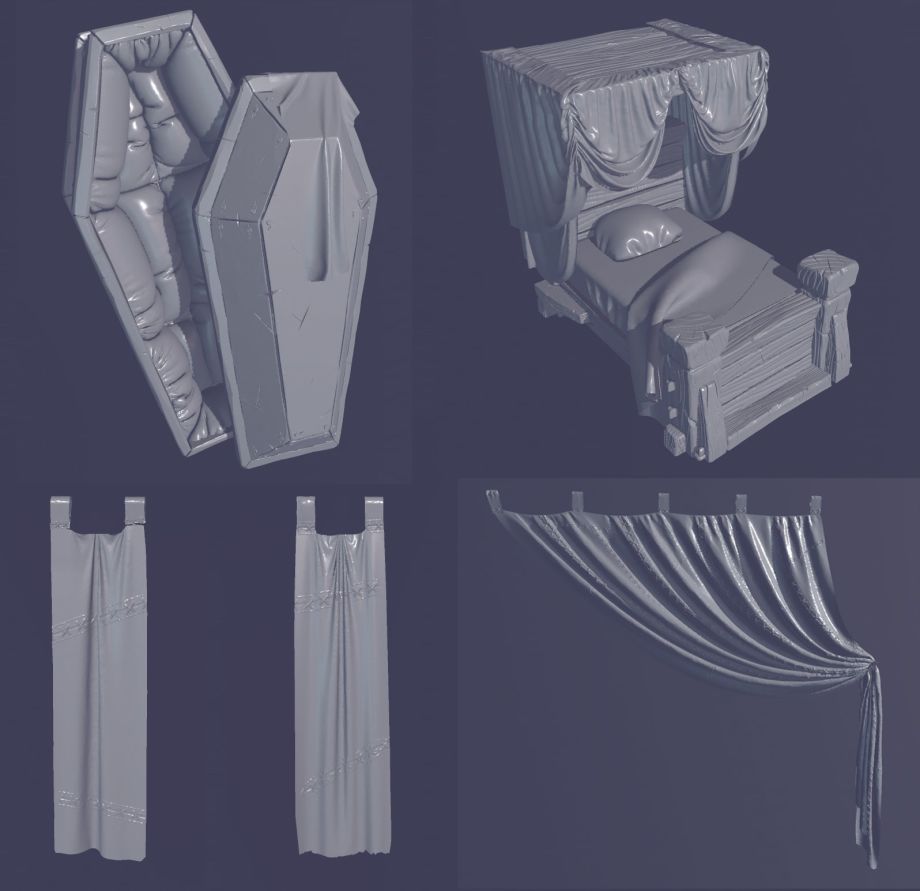 I started working on the low poly with importing the high poly over the blockout elements in Maya. Since the high poly was initially crafted from the blockout elements, I only had to adjust the geometry of those blocks instead of building the low poly from scratch. Plus I added extra cuts to the geometry, especially for the flat surfaces, such as the baldachin and the walls to either pull in or out some block shapes to have a better surface silhouette. 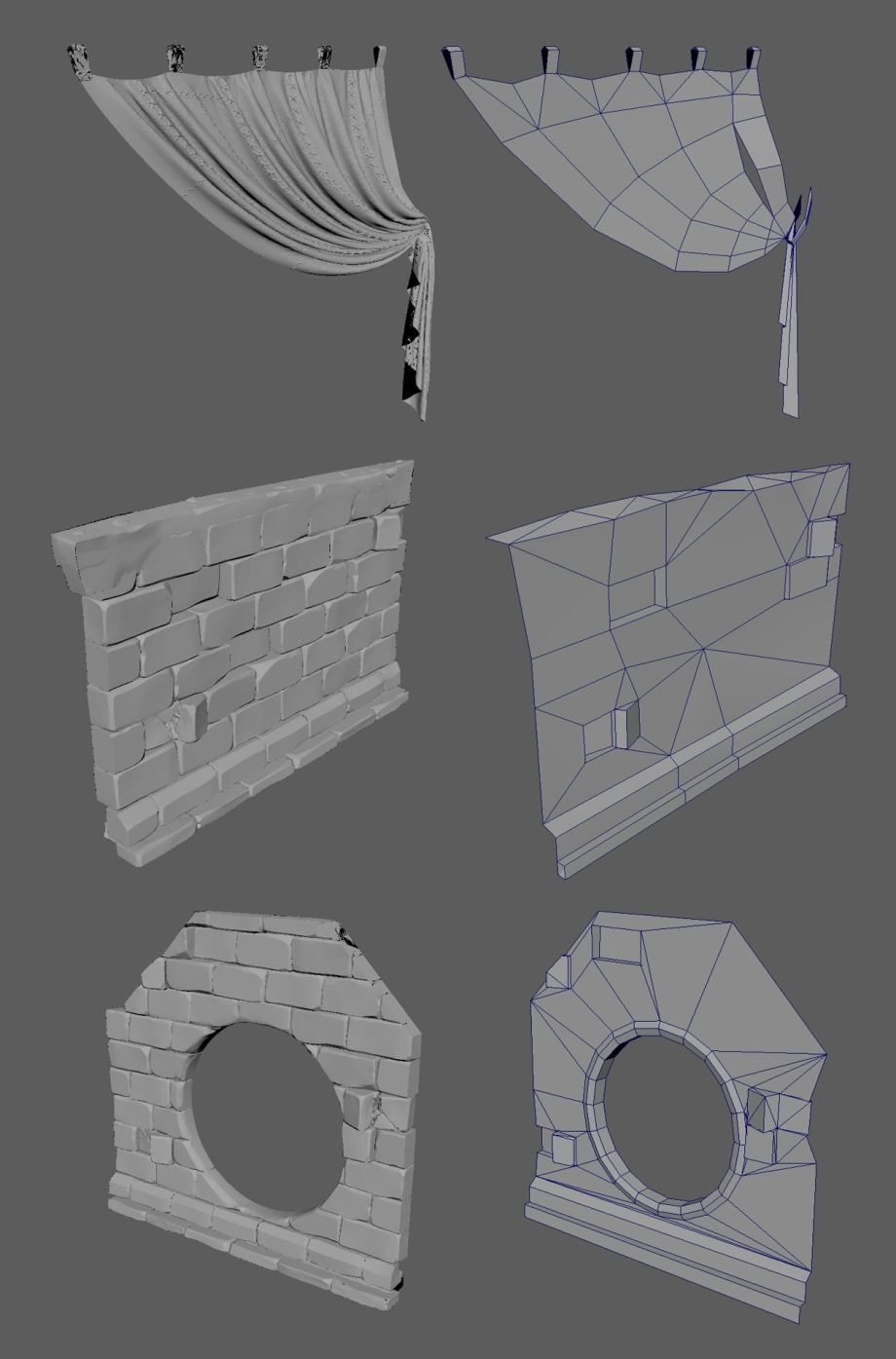 After triangulating all the geometry I unwrapped the UVs into 2 UV sets, softened/hardened the edges and edited the vertex normals to make it ready for baking.

I choose Marmoset Toolbag for baking because it gives me better control over the final result along its visual cages offset which I find a really nice feature. It helped a lot with the baldachin and other abnormal geometries. 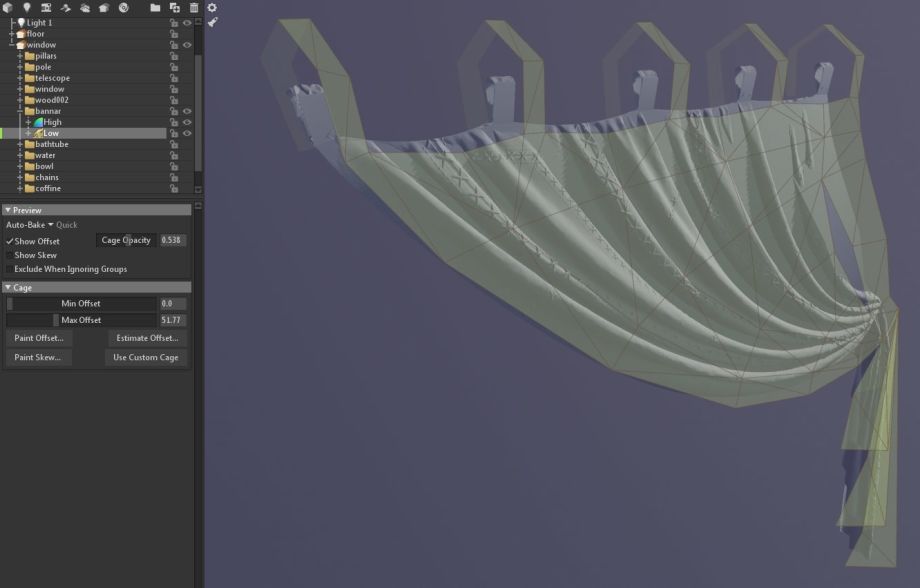 I separated the elements into multiple bake groups and got the maps needed to move to the texture painting process. 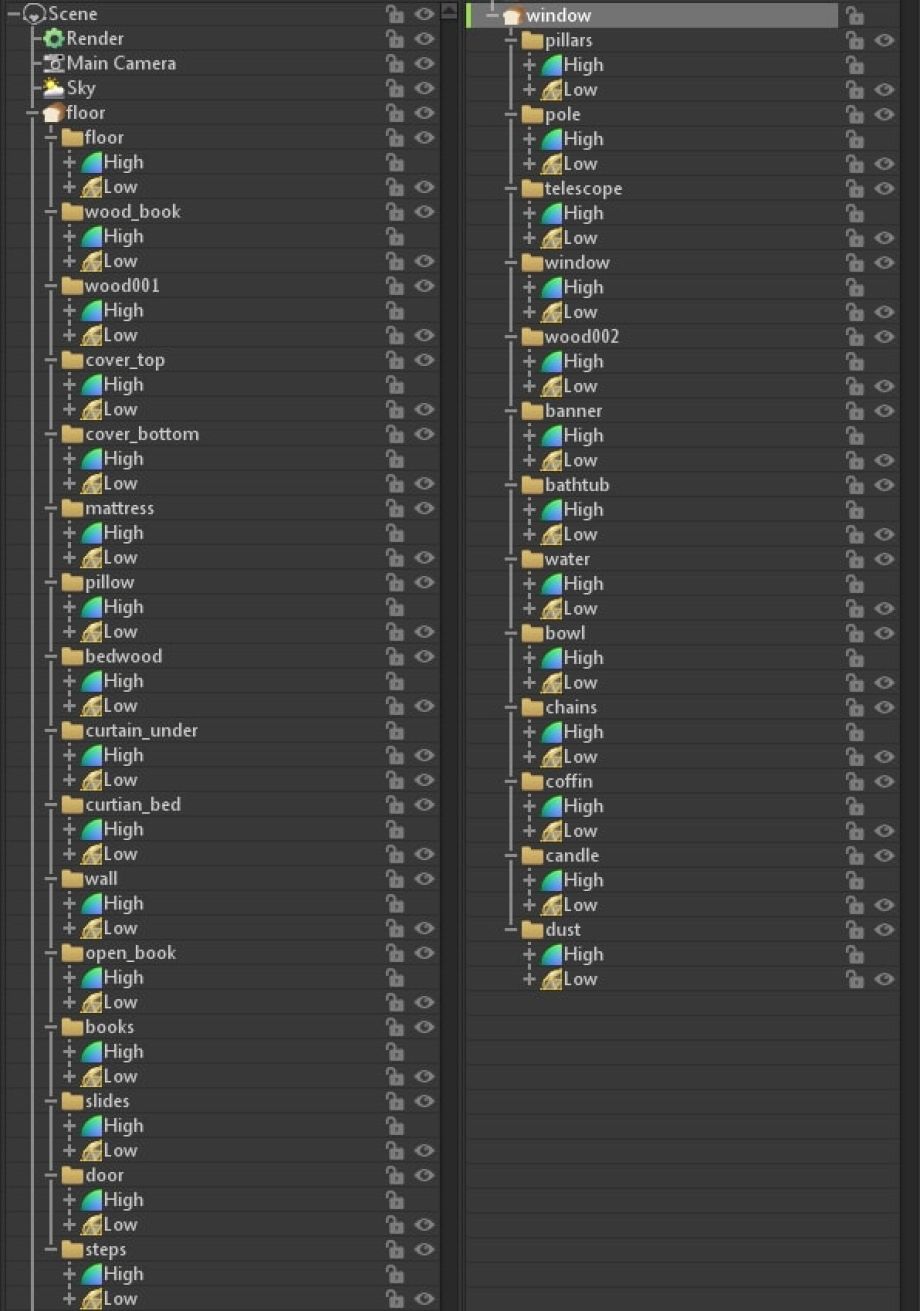 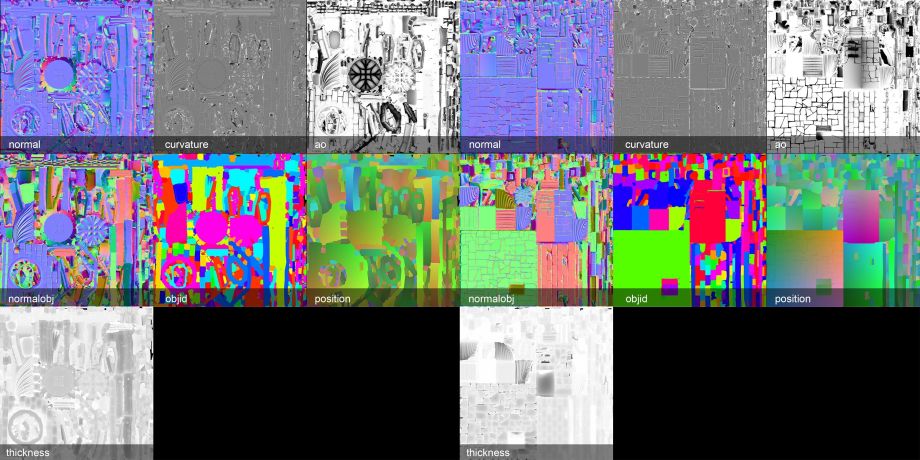 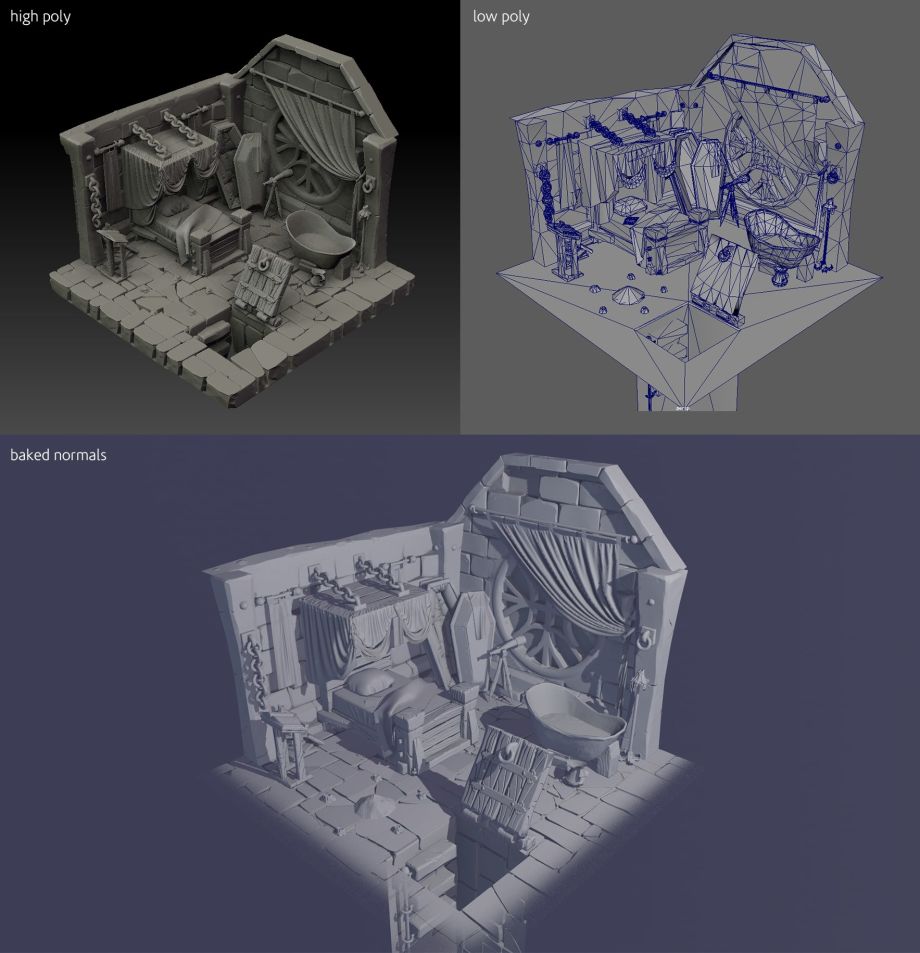 When the bake was finished, I imported the maps, texture sets, and meshes into Substance Painter. Since my goal was to have stylized textures I only painted over the diffuse map and masked each element with its ID map. First, I started with the base fill color, then used the position map to generate a mask editor that created a top-to-bottom white-to-black gradient which helped the objects to pop up, and used the curvature map to create highlight lines over the edges.

Each material got its own specific parameters which were later saved as smart materials. Thus I was able to apply them to other objects that used the same materials. 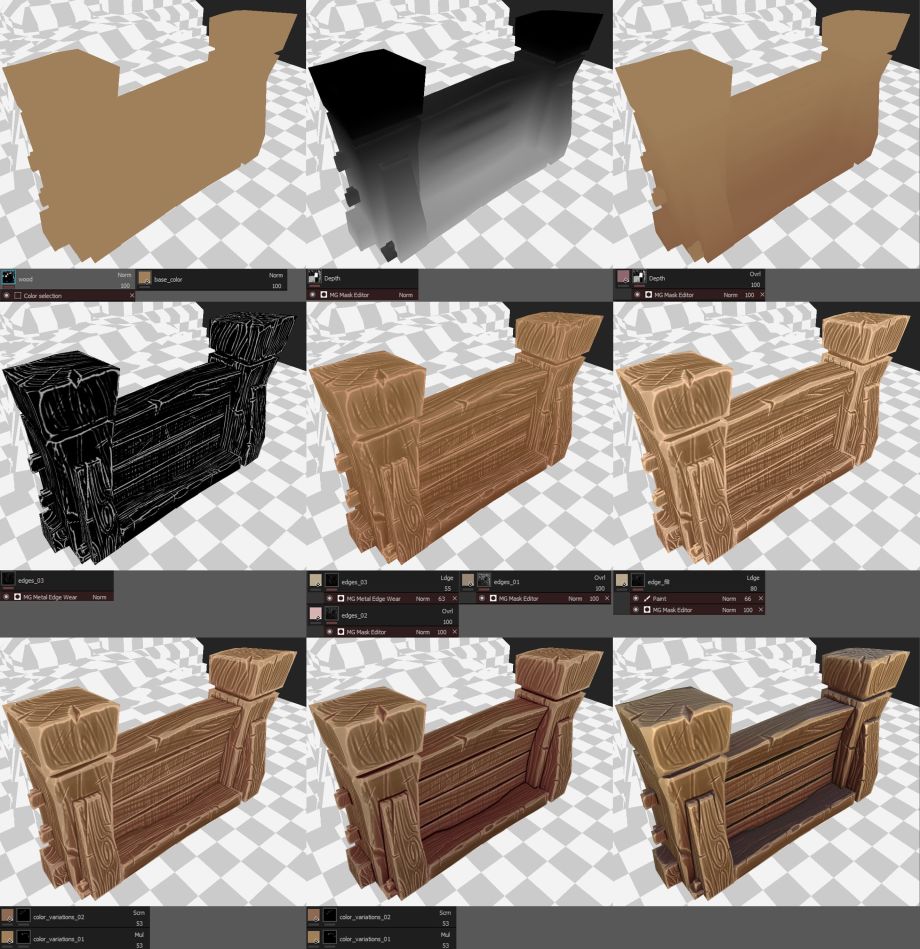 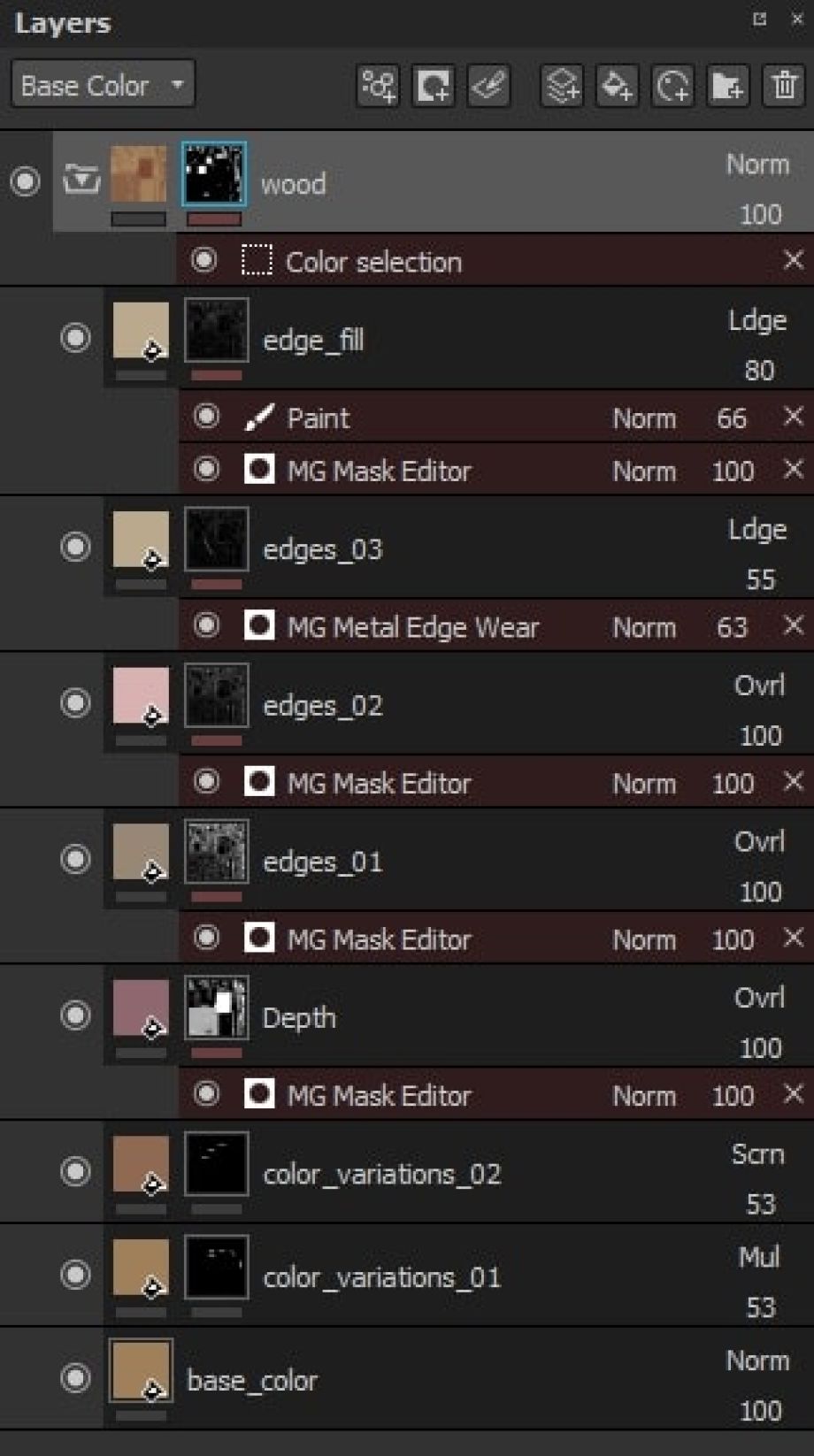 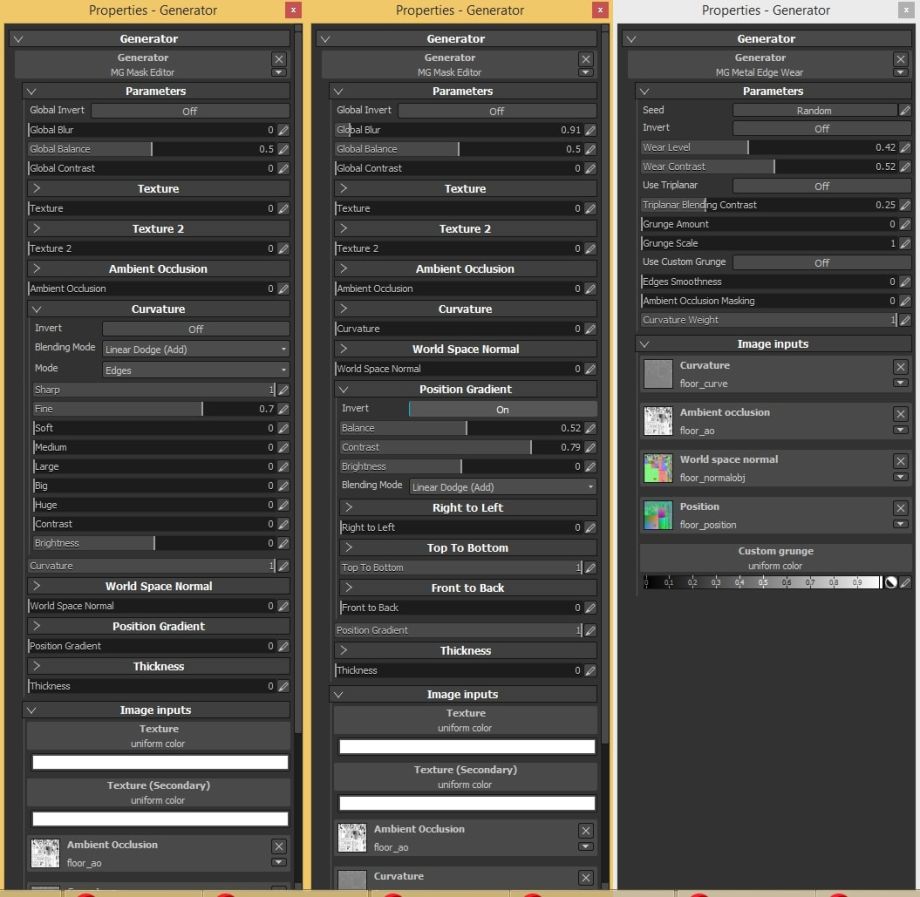 In some parts, I painted the UV directly in Photoshop, especially for the floor. It was going to be clearly visible in the scene, so I wanted to give it more details. 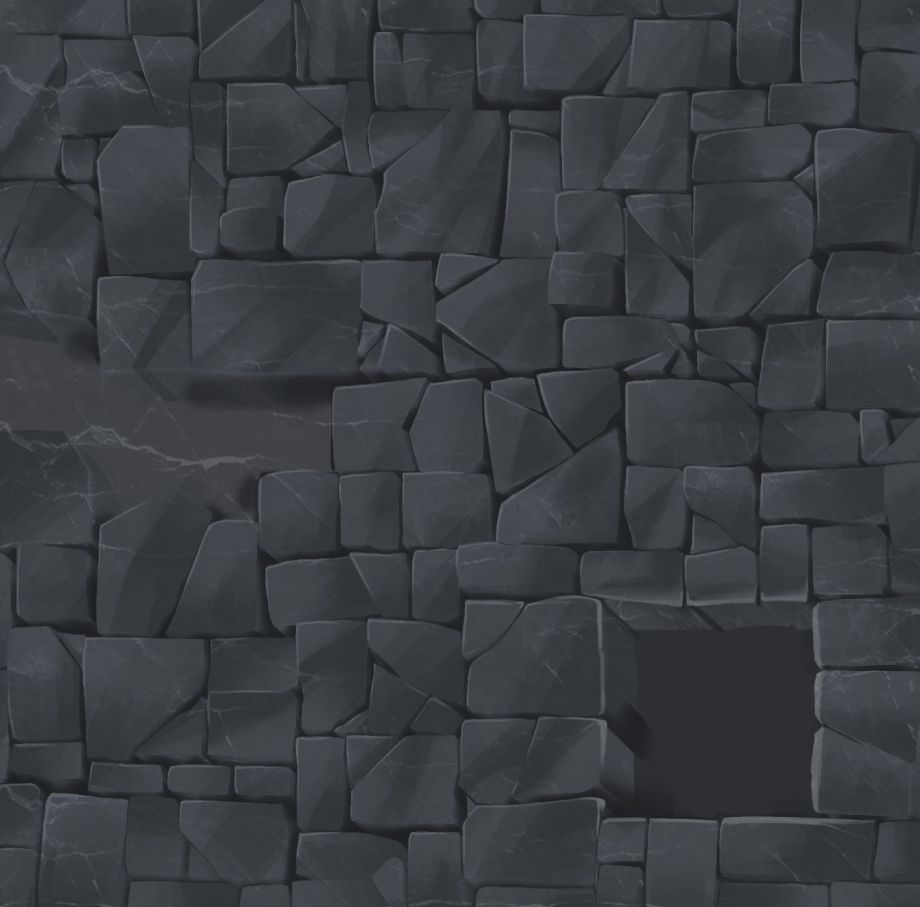 The glowing stained window effect was painted manually over an extra emissive channel. The same thing was done for the glow on the baldachin and the alchemy circle. 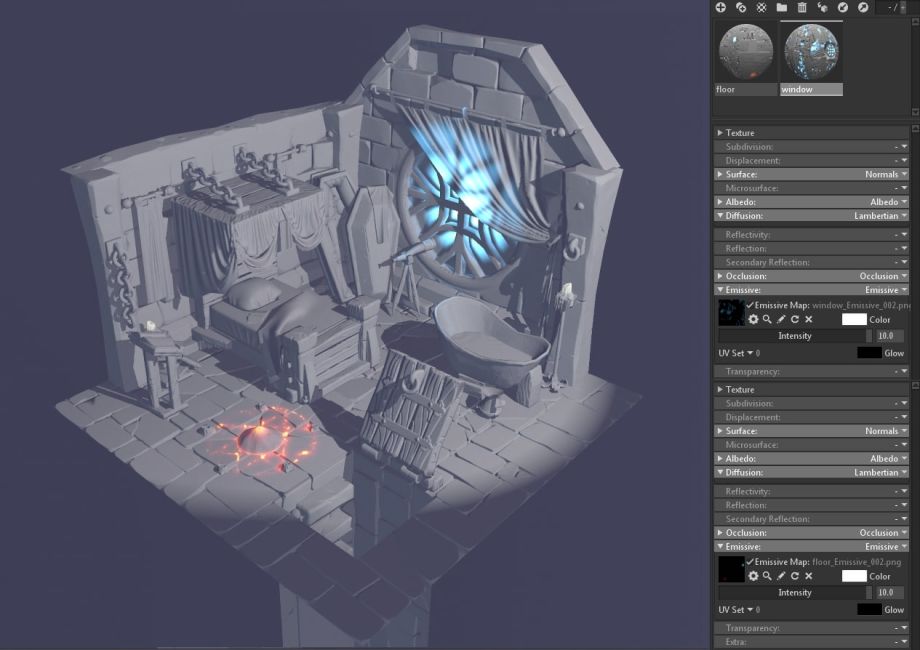 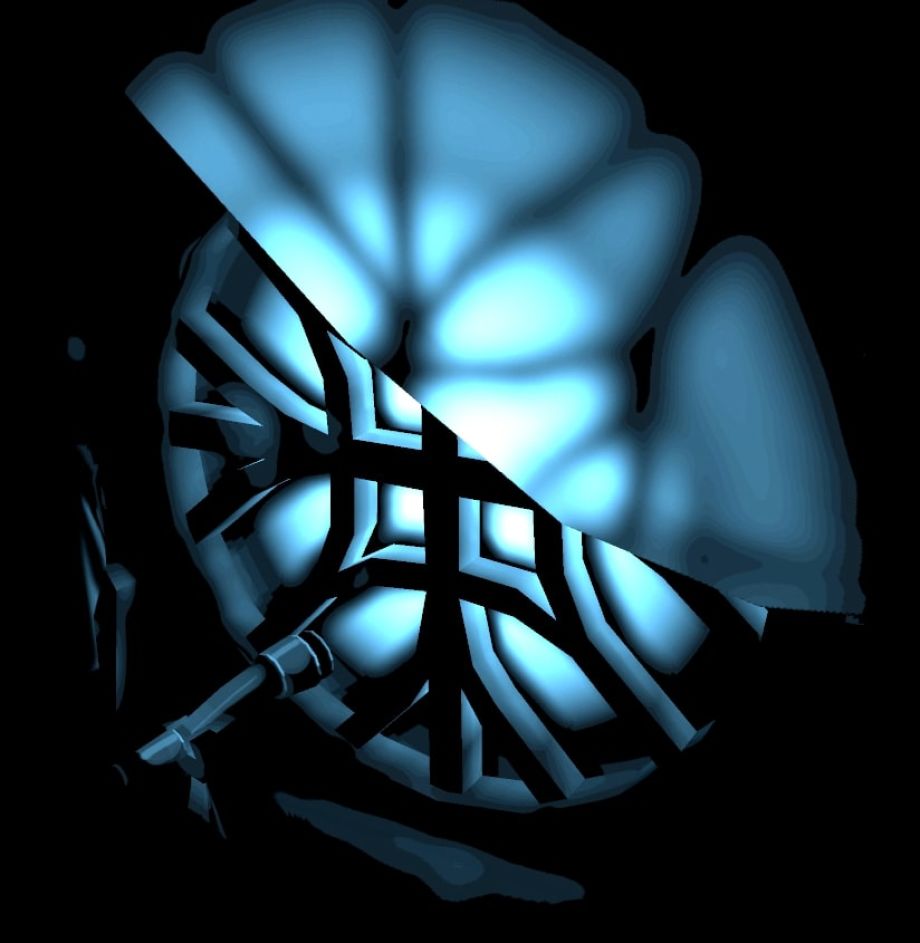 For lighting, I used 4 physical lights: a hard cold Spotlight (moonlight) that crossed the scene in the middle with two complimentary warm Omni lights (candle lights) on the sides to balance it out, and one Omni that was used to adjust the overall value of the scene. 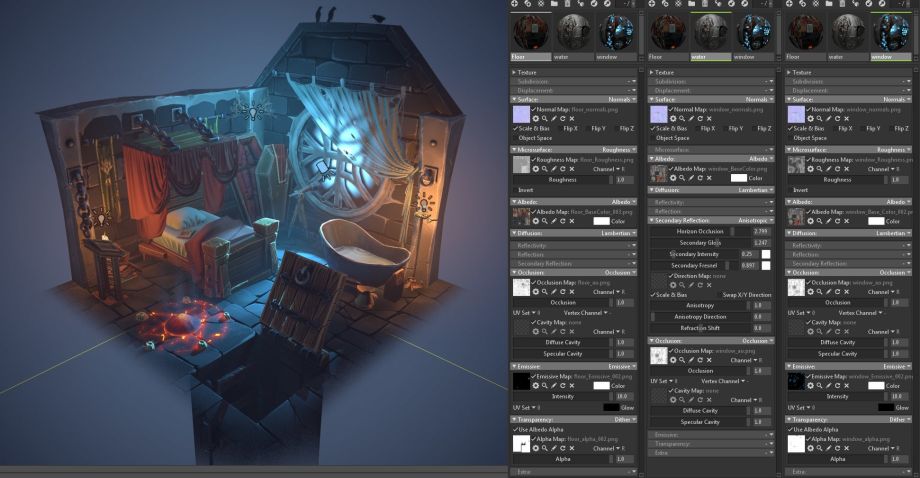 To finalize the scene I used some post-processing effects in Marmoset Toolbag, such as fog, vignette, and global illumination. 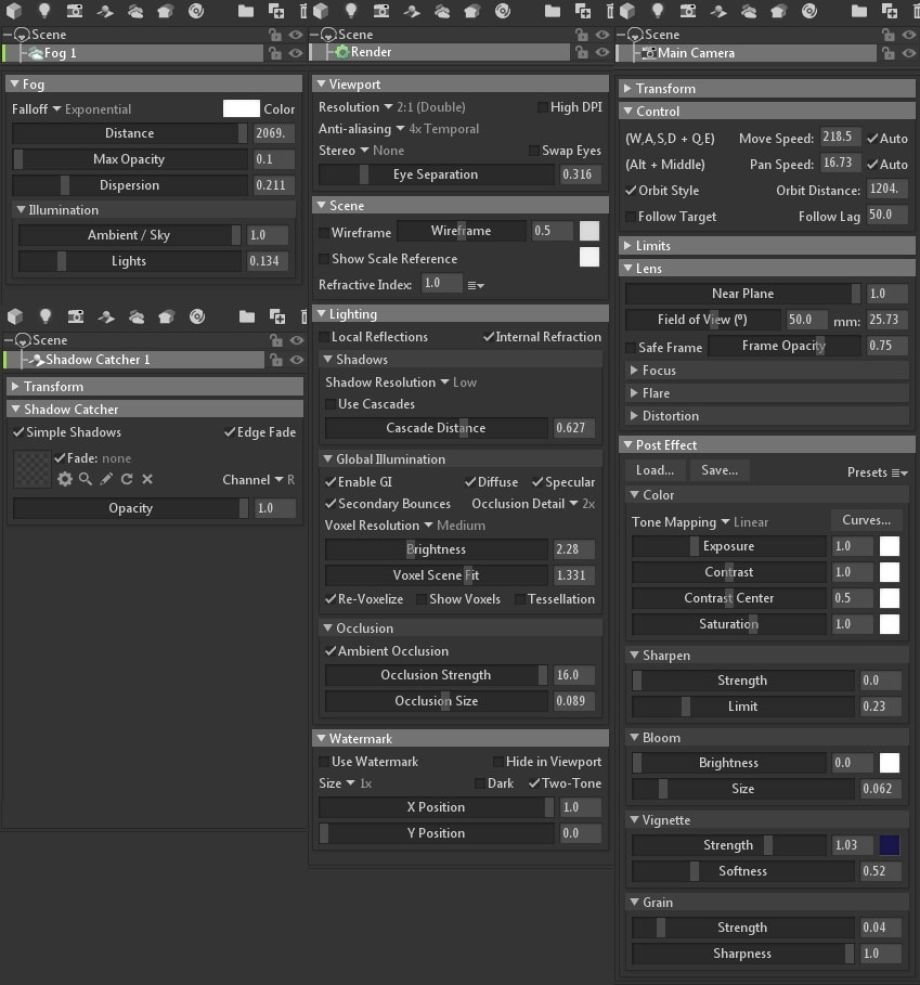 The biggest challenge for me was the baking part: in order not to have overlapping bakes I had to separate the scene into multiple groups, each with different parameters, and it got very complicated at one point. However, going through that was pretty rewarding.

Thanks for reading, and I hope you’ve enjoyed this breakdown!

Good news! Sketchfab is launching 25% discount that’ll be active until April 30 – use the code SPRING19! Here’re a few dioramas that you might like: