Andrew Alexandrov did a breakdown of his project Silent Knights with a reach storyline behind it and talked about level, Hero prop, material, and lighting production. 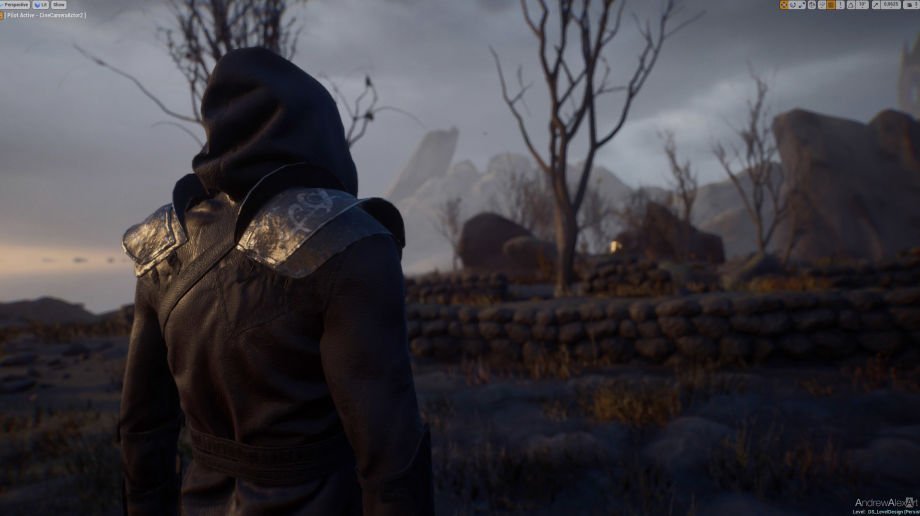 Hi, friends! My name is Andrew Alexandrov aka AndrewAlexArt. I am an Environment Artist though I often work remotely as a Texture and Material Artist. I took part in such projects as PUBG and The Walking Dead. You can read about my early career in my previous interview here. 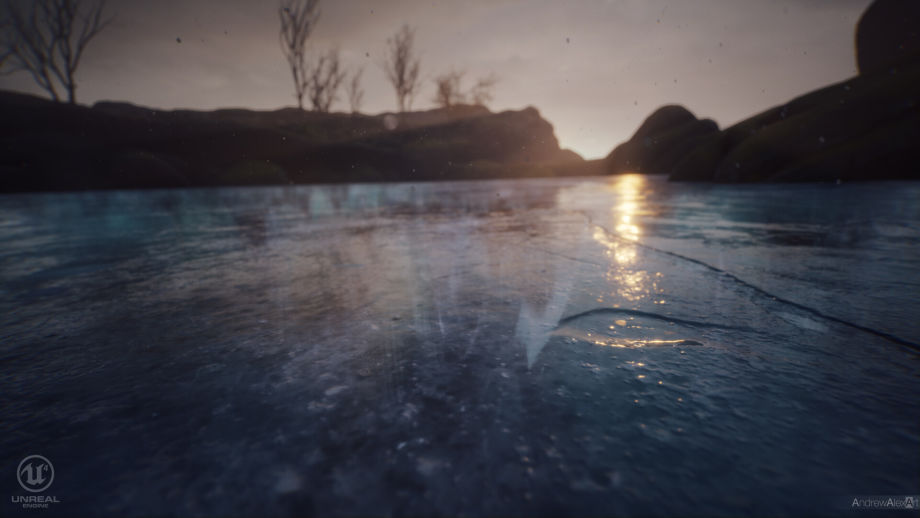 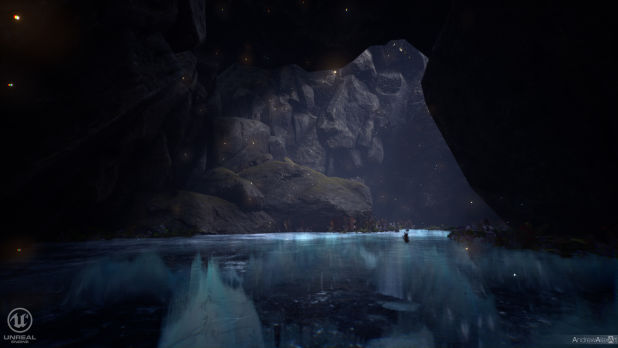 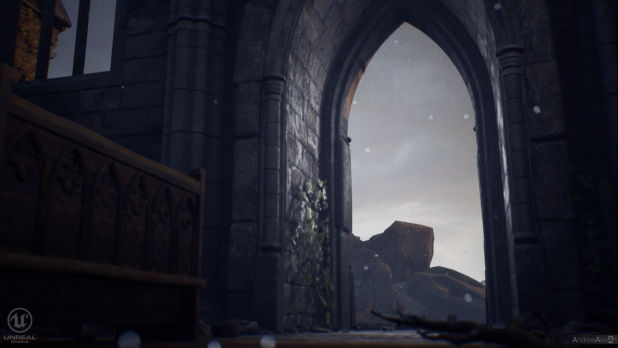 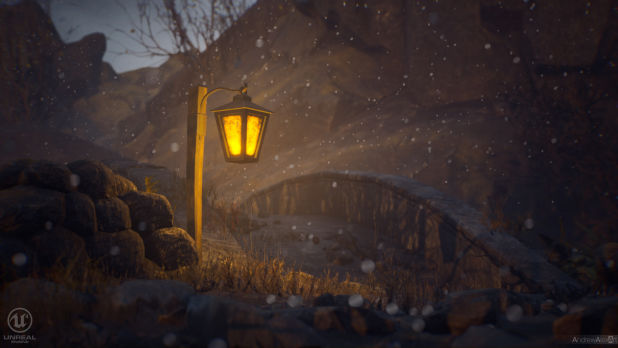 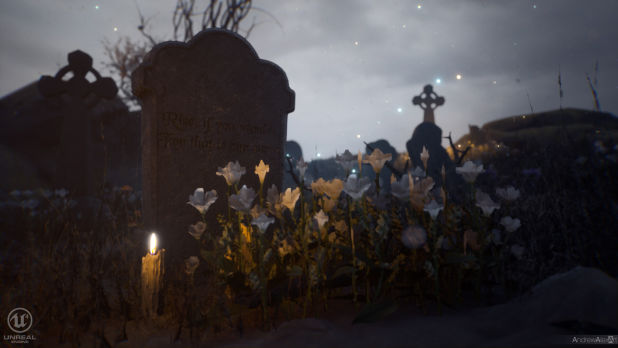 A year ago, when I was working full time, I got an idea to create something more ambitious than usual. I identified weaknesses I was going to improve and set to work. These weaknesses were: human anatomy, character design, level and world design, composition, optimization in UE4 and storytelling (because I also enjoy writing short background stories).

This project didn’t become an exception: I began with a story as usual. Together with my girlfriend, we thought up crazy things and mechanics to implement in the game. The intro alone took us about a week. It was when I understood that I would not be able to do everything on my own.

XIII-XIV century. Dark times. Guardians of the world who supported peace and balance start to die one by one murdered by some mysterious creature. Plague, illnesses, and monsters of all kinds invaded once flourishing land. Big cities fell. In villages, remnants of the people (our main hero Adrian is among them) are struggling fighting against the evil.

All of his life Adrian had been living in a small village under a mountain. He has never seen his mom. He was raised and taught to fight by his father, a skilled warrior who died in a battle. Before his death, Adrian’s father gave him an amulet which belonged to his mother. Right now, Adrian doesn’t know who his mother is but he will find out it later.

When Adrian was left all alone he decided to leave the village to fight against the evil and find out what had happened with the world. He crawls to the sanctuary of one of the Guardians on the mountain (this holy place is presented in my location). He’ll discover a lot of interesting things there…

Probably, I should stop here, or my story will take too long.

Creating the world, I drew inspiration from such locations and games as Scotland from Uncharted 4, God of War (2018), Bloodborne, DarkSouls.

I had never made characters before and had troubles with anatomy, so I decided to have additional practice. For references, I used PureRef which is a great program: 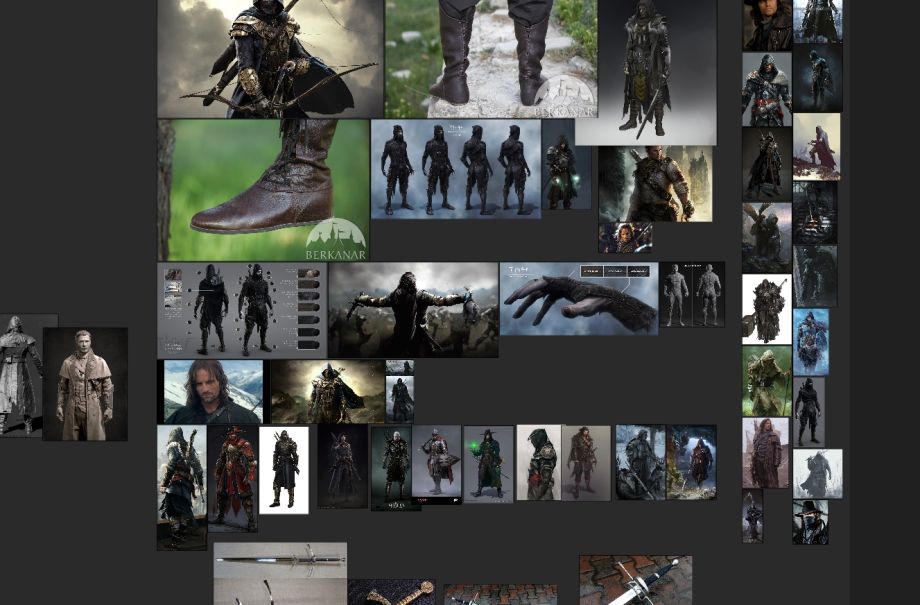 Creation of the character began with blocking in ZBrush and modeling clothes in Marvelous Designer. To everyone who is interested in MD, I recommend watching tutorials from Camille Kleinman. The rest of the workflow was standard: modeling in ZBrush, retopology in 3ds Max, texturing in Substance Painter. 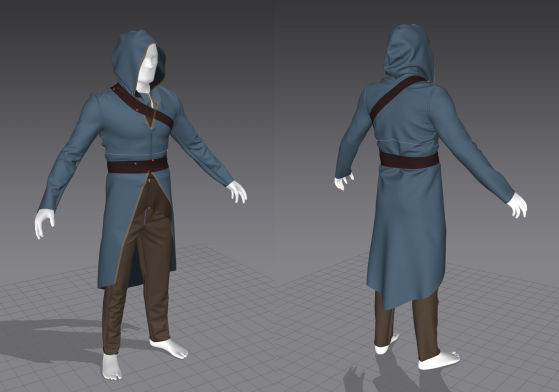 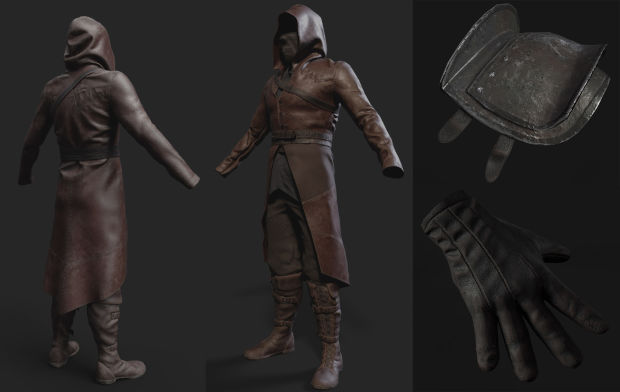 I don’t want to talk much about the character here as I’ve already described its workflow in my ArtStation blog – you can check it out here. 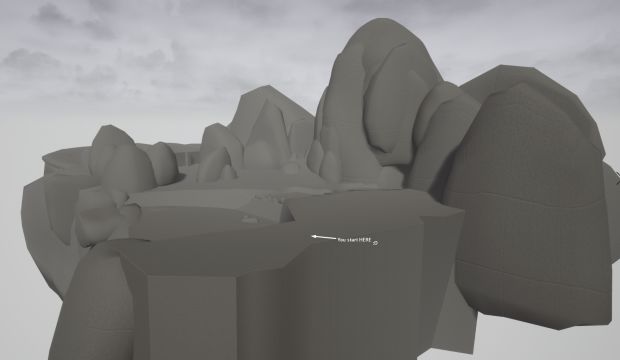 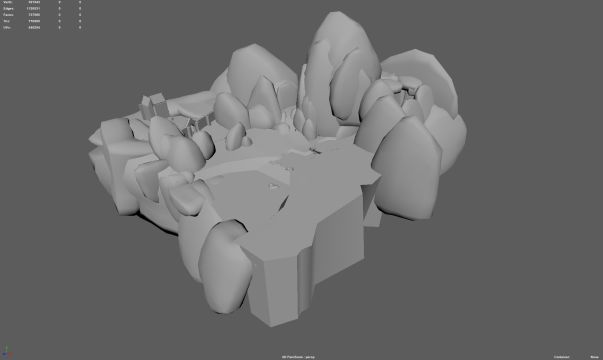 I always start with blockout as it helps to identify the proportions and the amount of work. In the beginning, I was going to do everything in Maya, however, it turned to be very inconvenient for assets creation yet handy for scene planning. So, I used Maya for a quick blockout and character rig with ARTv1 plugin from Epic.

It was my first experience in large space creation, so in the beginning, it was difficult to make the layout interesting to explore. But after a while, it went with a swing, and I hope I managed to overcome the challenge. The scene was changed multiple times, and the final version can be seen above. There is no direct path to the church, and you have three options. 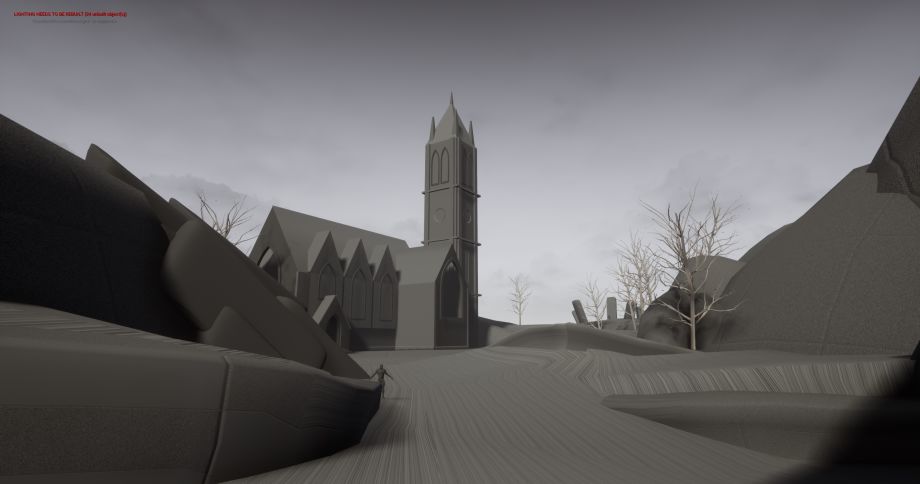 Since the church is the main object in this location, so indulged in working with details, composition, light, and materials to the fullest. 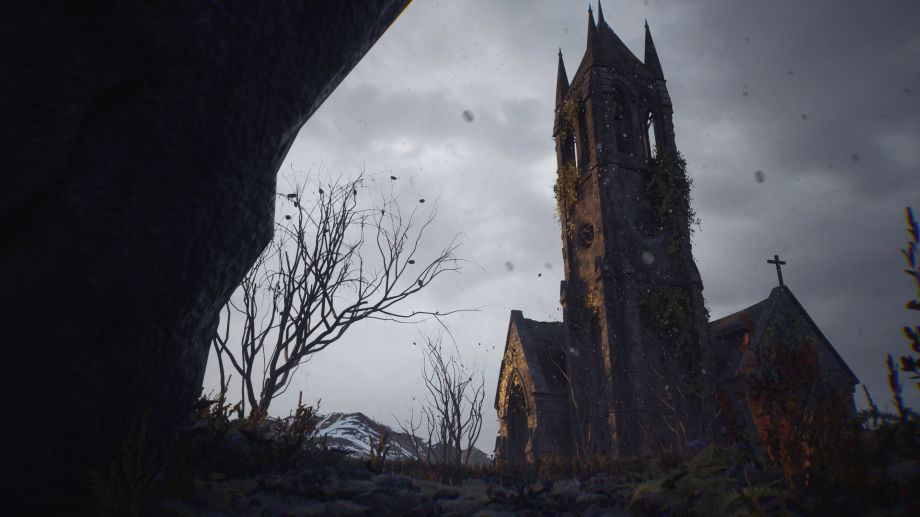 One of my main goals was to make this level playable. That is why I paid special attention to the trims, tileable textures, and optimization. To be precise, I baked only blocks for arches, ladders, and statues. All other objects were divided into trims and tiles with Vertex Paint. Watch a great guide The Ultimate Trim to catch my workflow.

All the arches, windows, columns and baseboards took two atlases with trims: 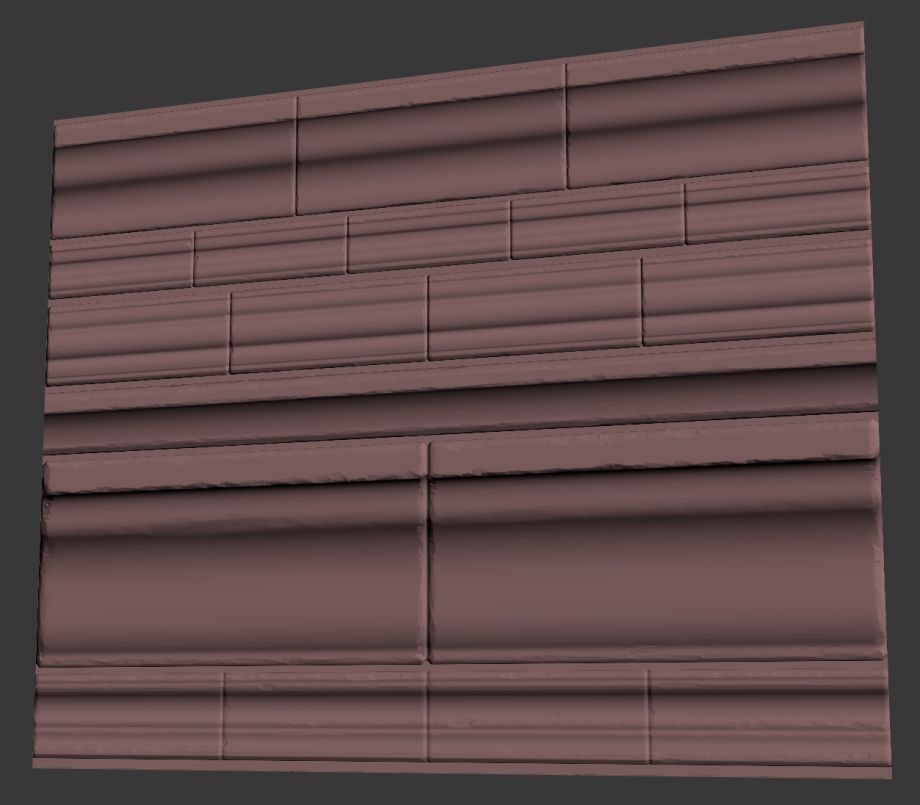 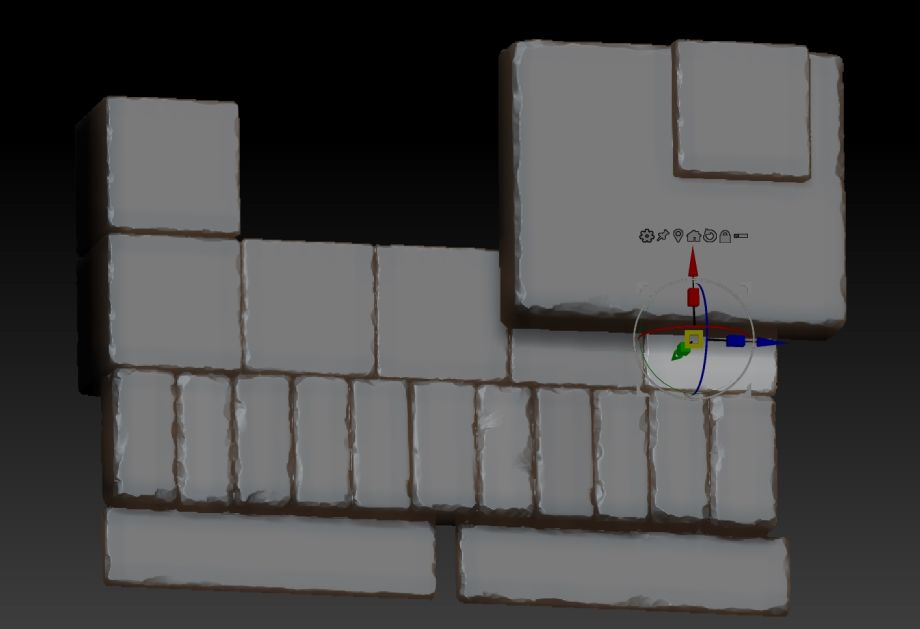 In addition to the atlas, to avoid repetition, I created a shader to blend dirty and destroyed materials via Vertex Paint. As a result, I could assemble objects like this: 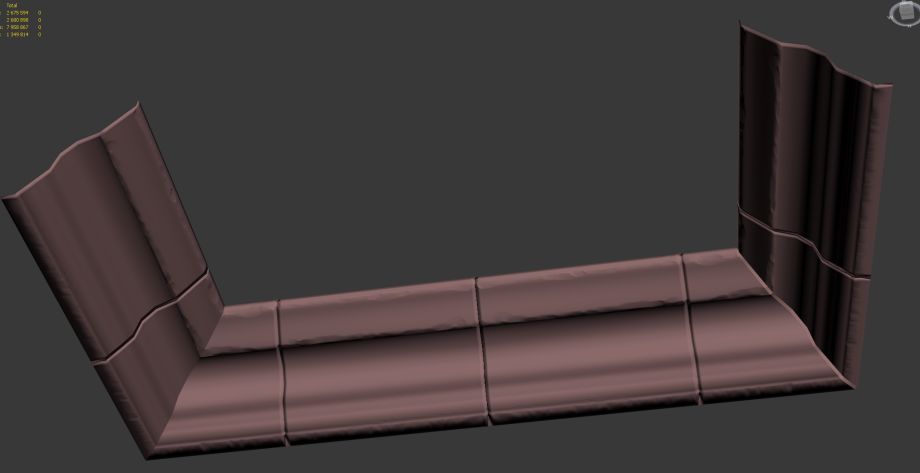 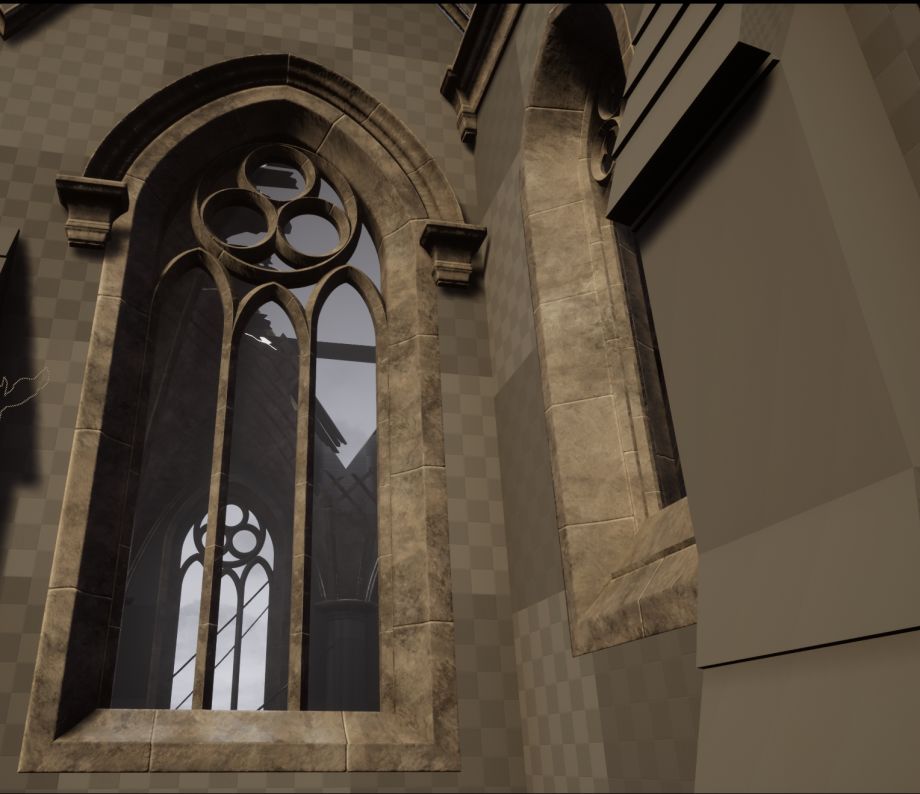 I also prepared a material with opacity to mix lath and plaster via VertexPaint.

All materials were made in Substance Designer. Sometimes I also create Base Heightmap in ZBrush. If you are interested, all materials are available on my Gumroad. 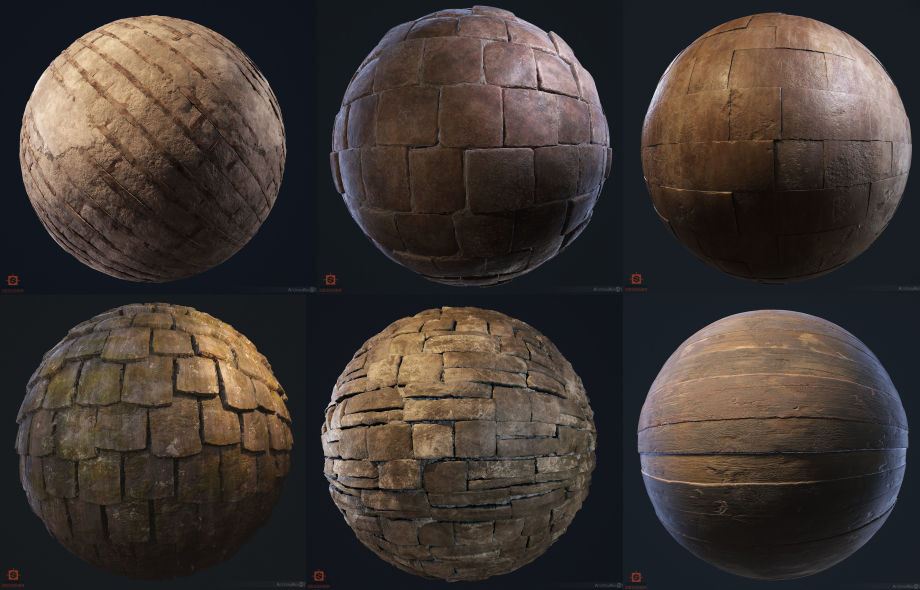 I always gradually move from general shapes to specific details. When the shape is ready, I get down to colorization, leaving Roughness map to the very end. 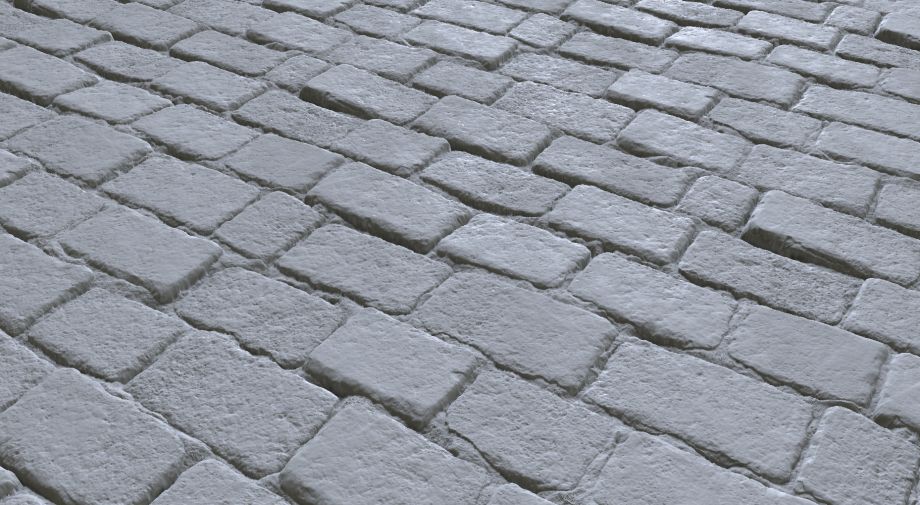 Ice Shader was made from my own custom material created in Substance Designer a while ago. 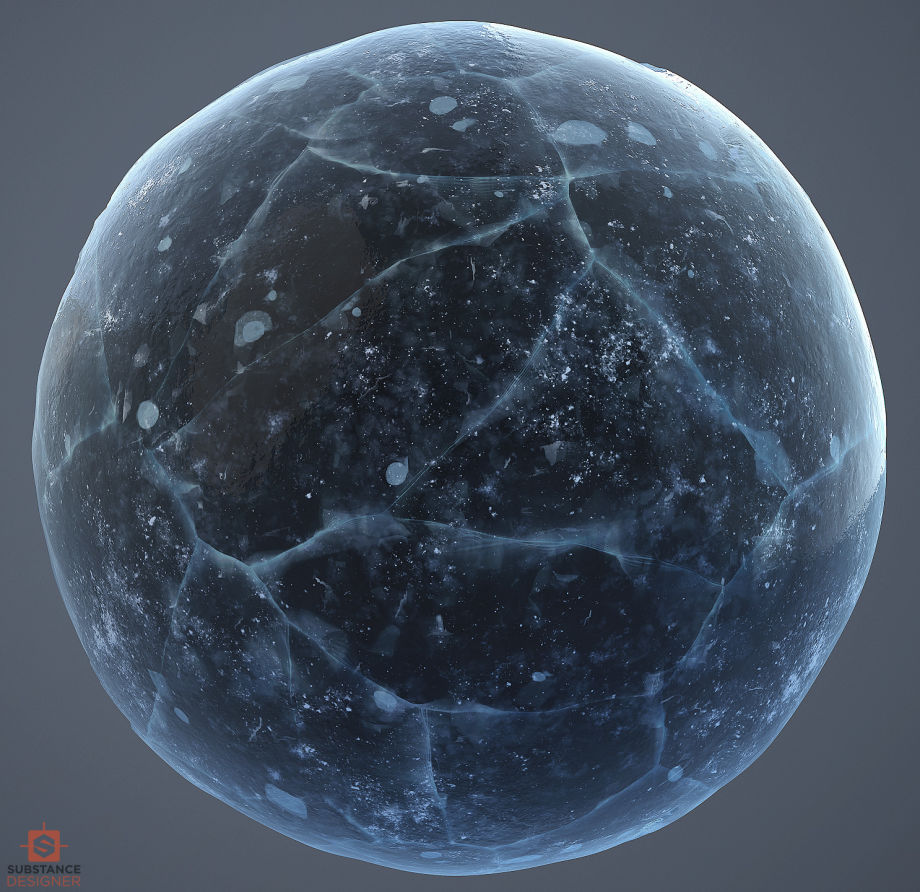 To avoid ice uniformity, I added one texture of “harder” ice via Vertex Paint.

A few words about Candle Fire shader. It was tough but I did it, I am absolutely happy with the result.

Look here if you want to get acquainted with the shader.

Texture Sample slot is for a fire texture, like this:

Lighting is one of my favorite parts of the workflow. I can spend plenty of time adjusting the light until I get an acceptable result. Many people neglect this stage. Good lighting can improve bad modeling, while even the best shaders, models and composition will be ruined by bad light.

With Emily’s House in my portfolio (a large project with baked light), this time, I decided not to bake it at all, to practice dynamic lighting. There is one main light source in the scene, Directional Light. If while exploring the scene you push L, the sun will go out and the scene will look a bit darker.

Inside the church, there is a SpotLight imitating a light bouncing. It makes the light more natural. 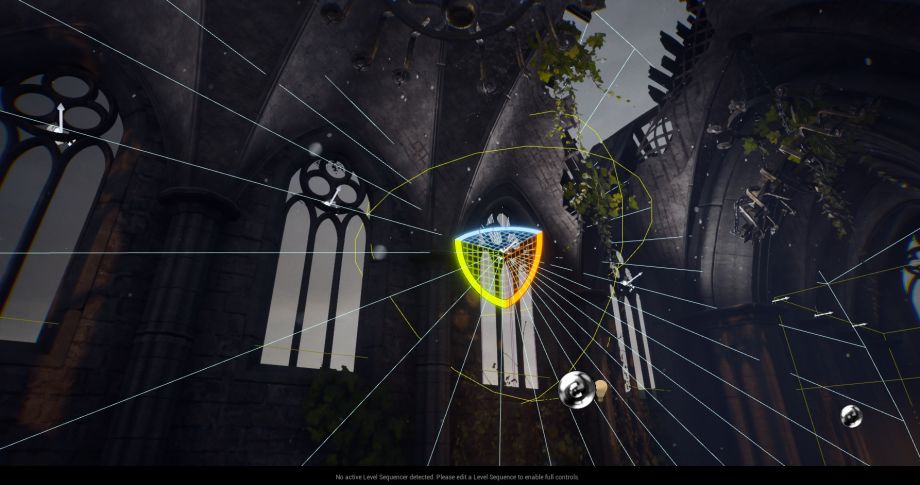 Candles are PointLights with Light Function for the natural light twinkling. 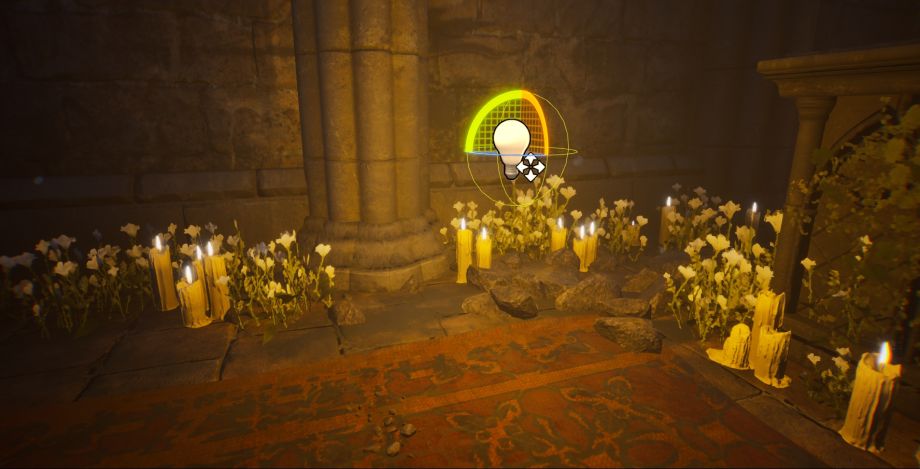 By plot, “fireflies” accumulate in particular places where a player can find something important, something that helps to understand the lore or warns them about upcoming events. There are two types of fireflies – warm and cold. In the cave, you meet warm fireflies, while cold ones are waiting for you in the cemetery. In general, they also liven things up.

In terms of generation, fireflies are simple and require very little memory. Their creation was simple too and I don’t want to waste your time on it. If you need information about it, search on Youtube for any video on “firefly particles”. 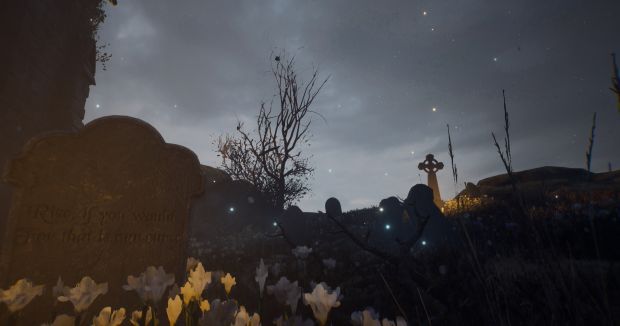 I rarely use scans, however, they give advantage in commercial production by saving time and money. Being an artist, I enjoy modeling things from scratch, from huge rocks and stones to small branches. By the way, I can recommend a ZBrush plugin ZTree, a perfect tool for trees and branches.

In this project, I used scans to save time for grass and bushes. More info about grass creation from scans is in my previous interview.

It was only one place where I used Megascans. Other objects were made and textured from scratch.

Thanks to everyone who stayed until the end and 80.lv team for giving me the opportunity to share my experience. I hope you found something interesting.  I wish you the best ideas and inspiration!