Joel Zakrisson gives a breakdown of his Mansion Hall and various ways he creates the mood in his scenes.

We present to you our second interview with 3d artist Joel Zakrisson. This time the artist discussed the creation of his amazing ‘Mansion Hall’. The scene is all about contrasting mood – it’s calm and yet something is spooky, it’s so warm, but it seems that if you touch the windows, you’re gonna get frozen. Joel talked creating assets, texturing, post-production and discussed production details.

I’m Joel Zakrisson, a student at Future Games and 3D artist at Vobling in Stockholm, Sweden. I’m primarily doing environment art and tend to take on ambitious and highly detailed projects, whether it’s a scene or a prop.

A few months back I did the interview “Mastering 3D Art” where I discussed my production process in general. This time we’re going to dive into my latest environment piece, the Mansion Hall. 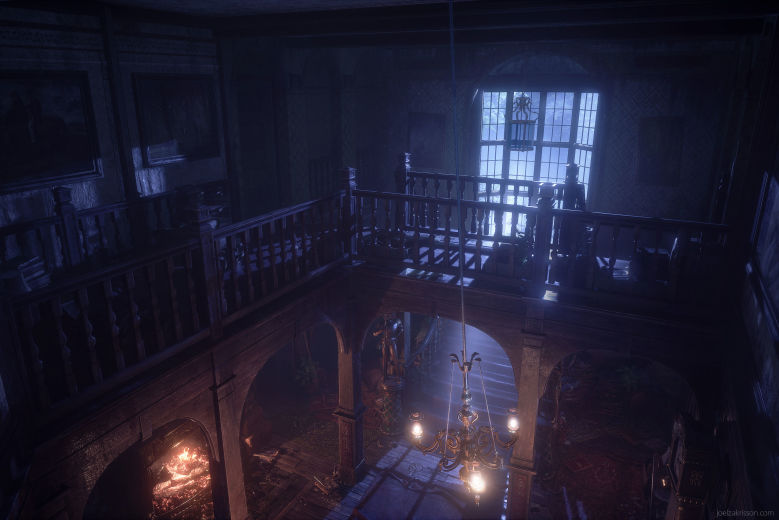 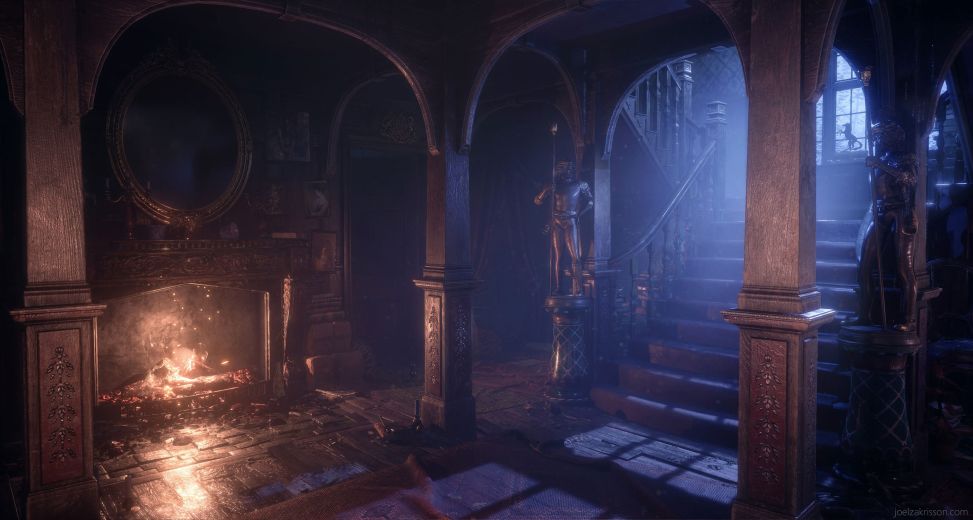 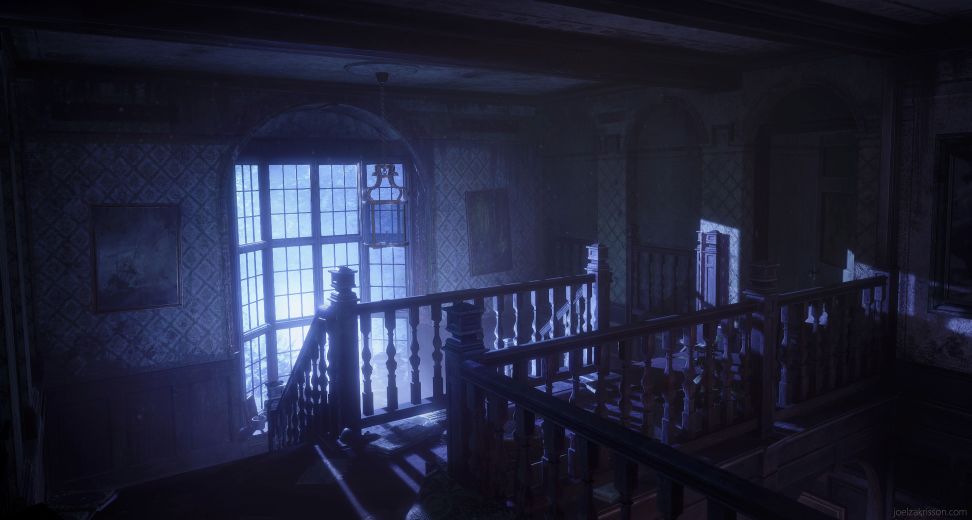 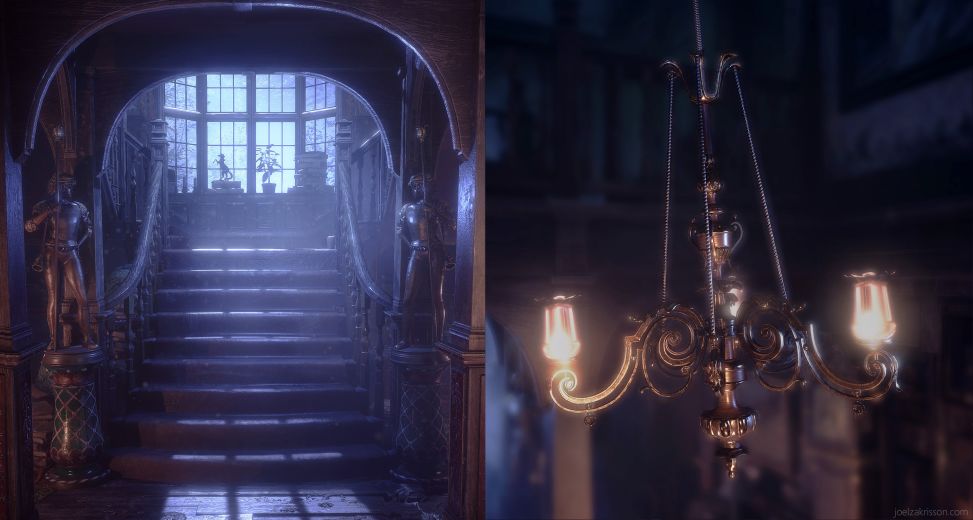 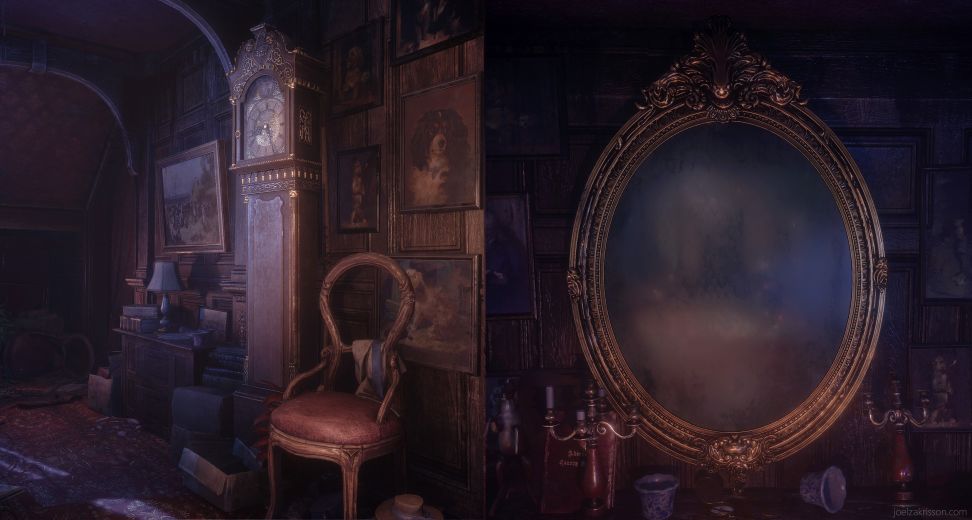 The original idea was to create a modular scene with a few unique props spread throughout the environment. I felt that a mansion interior would be perfect for this, with its interesting assets and strong atmosphere.

After some research I found this Edwardian manor on Location Partnership, a site for film-makers looking for a set where they can shoot. 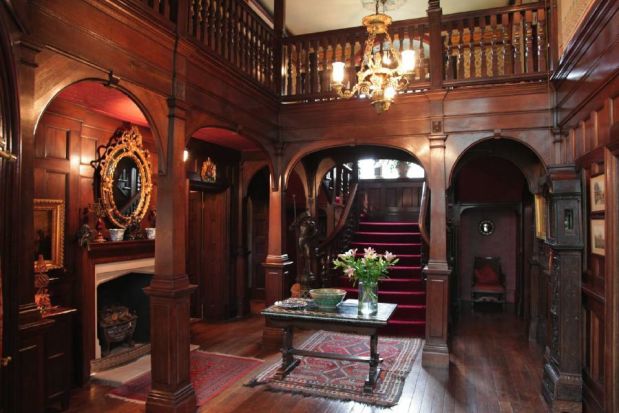 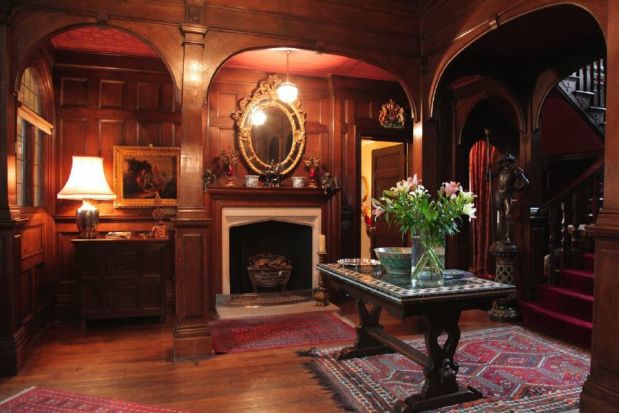 While this particular room wasn’t the most beautiful I’ve ever seen, the site had plenty of reference images from various angles which is extremely helpful when figuring out the scale and composition of a scene.

I made this breakdown of the references to get an overview of the most essential pieces I knew I had to make.

The room had a lot of potential for an atmospheric horror mood, if I could get the lighting right. I gathered a bunch of references from games I’ve played with a similar look to what I had in mind. 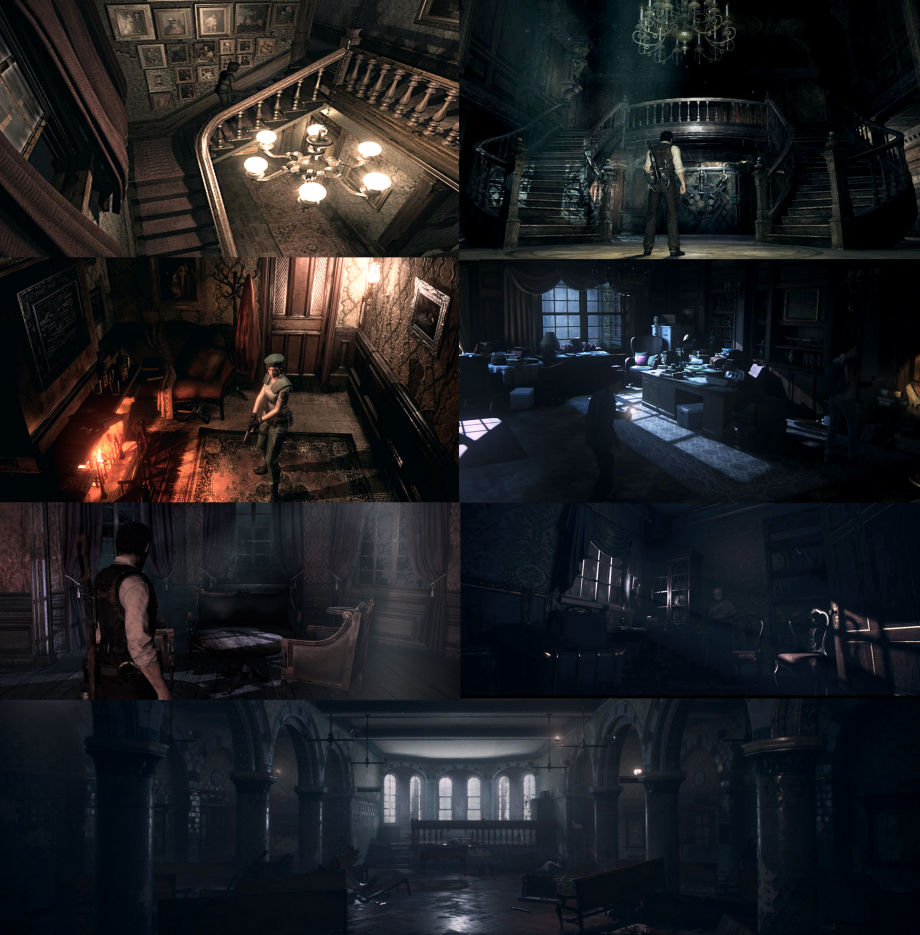 I started the project with a basic blockout in Unreal Engine to get a sense of the scale. It felt a bit claustrophobic during my first play tests, so I made the room wider than in the reference. 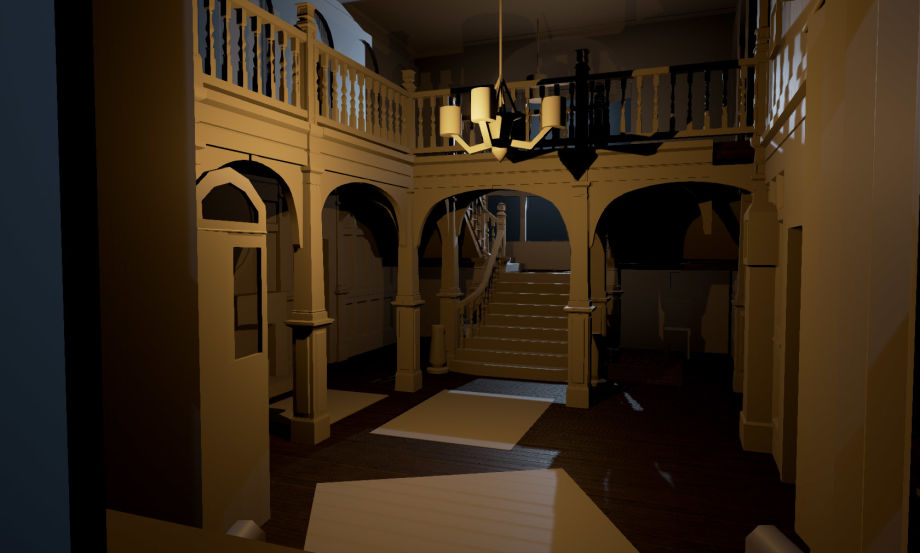 After this I started updating all modular assets with final models and first iterations of textures. 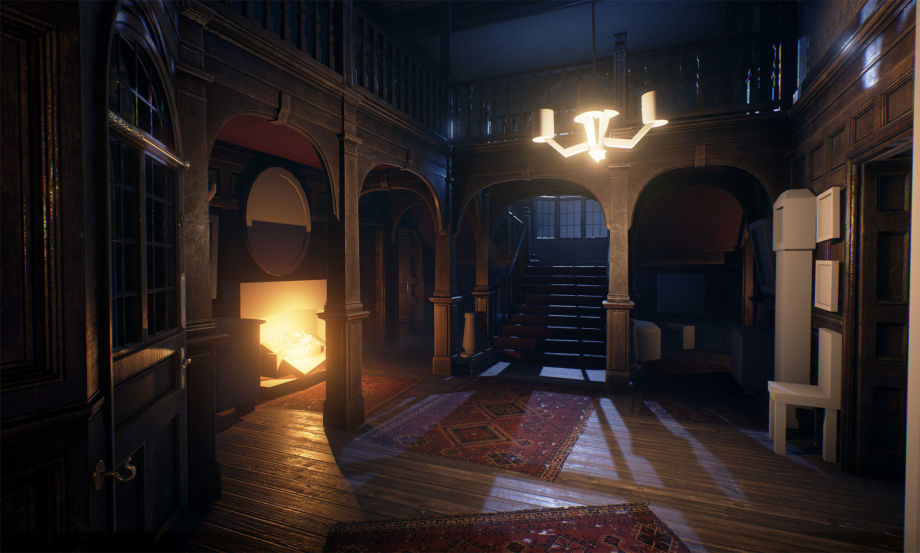 I waited with the complex models until last which allowed me to establish a mood before doing more time consuming modeling. At this point I went back and forth between tweaking lighting and post-process settings and modeling. 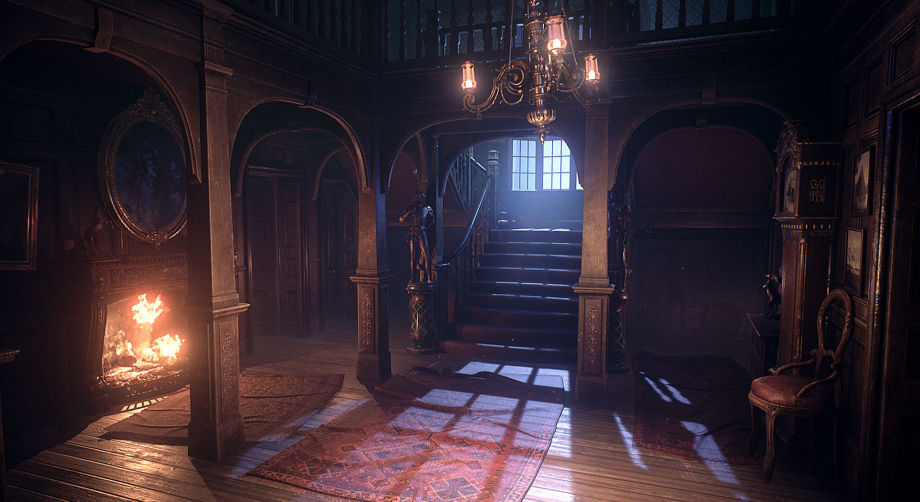 Toward the end I started polishing by adding grunge to the textures, as well as small props and various details to make the scene feel abandoned and worn down. 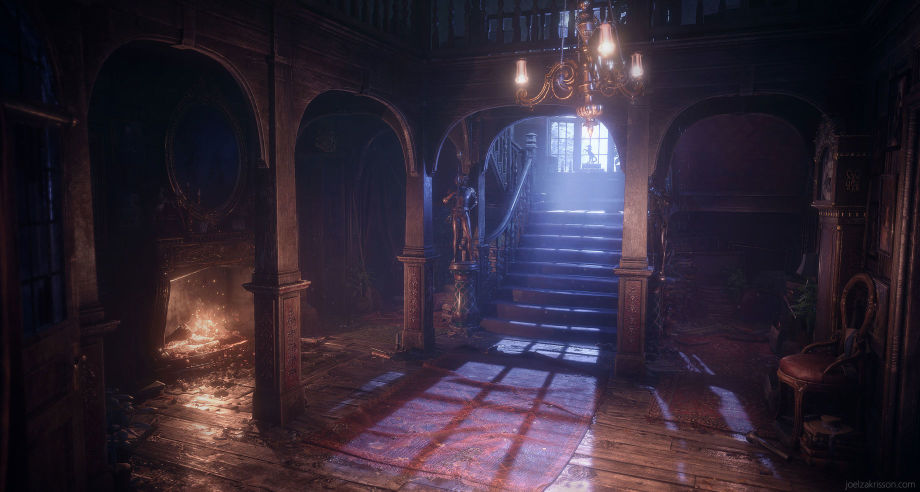 I regularily imported screenshots into Photoshop and flipped them around to spot bad looking elements I hadn’t noticed. Adding a black and white layer could help me find unnecessary highlights to remove.

Saving older screenshots gave me a sense of progress and warned me if I was taking the scene in the wrong direction. Lighting tweaks and extra wear could at times be for the worse.

Almost all modular assets were built and baked in Maya. Making them look similar to the reference but still work as a modular toolkit was the trickiest part during the early stages of the project, especially when it came to the stairs.

The non-modular props were made in Maya and Zbrush. For these I modeled a high poly base mesh in Maya that I used for sculpting details.

Sometimes it was hard to decide whether I should sculpt certain details in Zbrush or generate normal maps from images in Bitmap2Material. I think it’s unnecesary to spend time on sculpting, if the end result can look the same with a program like B2M or Quixel’s NDO.

For flat surfaces such as the sides of the clock I mainly used patterns processed in B2M. With curvature information baked from the normal map, I could get an edge mask for gold in Substance Painter. 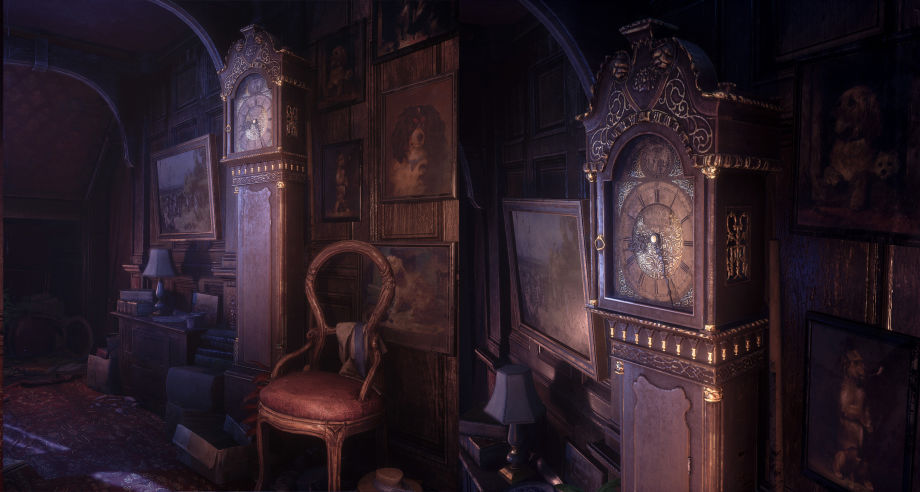 With so much content to make, I tried to take shortcuts wherever I could. Cloth and rugs were simulated with Marvelous Designer, and the statues were made with a rigged mesh generated in MakeHuman, which I sculpted on in Zbrush. 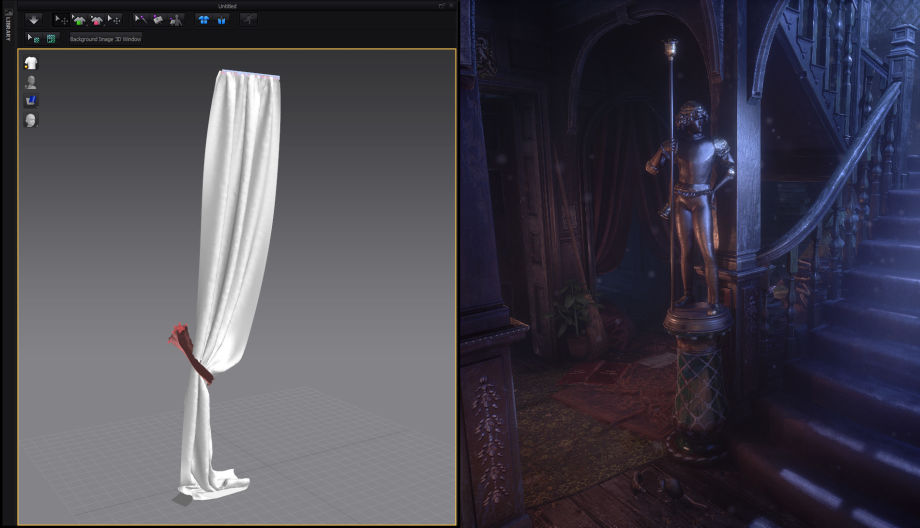 I used Substance Painter for the creation of all textures. Most of them are completely made in Substance, but some are photo textures modified in the program.

I use a lot of smart masks in my texturing process. Small details really pop with some dirt in occluded areas and highlighted edges, especially for sculpted pieces such as the mirror. Roughness and height variations dramatically increases the effect.

For the wood I used Substance Painter’s different procedural masks, in combination with some overlaid wood textures. Using height and base color in an overlay layer gave the material a nice wooden touch. I made smart material variations of this, which I used for all wooden props in the scene. 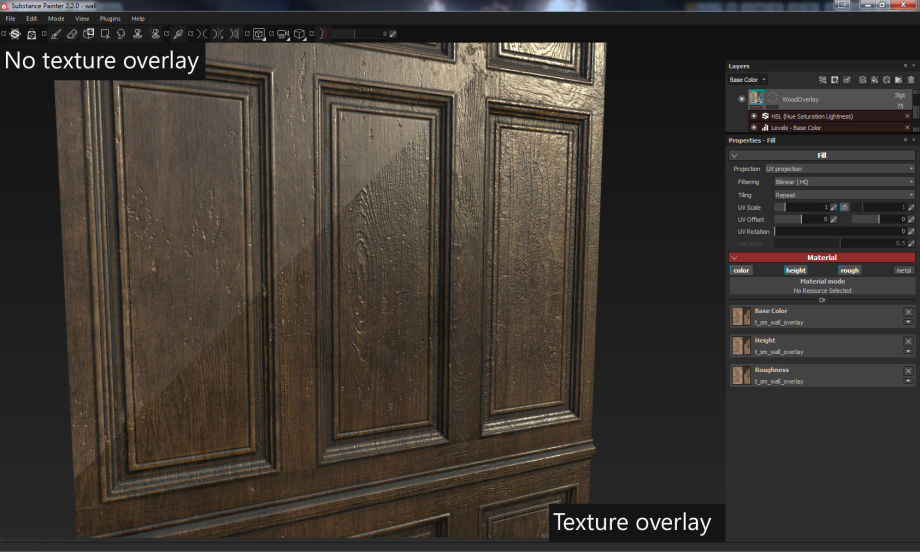 The floor material is based on normal maps generated in Bitmap2Material. In Substance Painter I could adjust the amount of dirt and wear with overlaid masks, and used these variations for vertex painting. I manually placed a few planks with the same texture on top of the floor planes for some height variation. 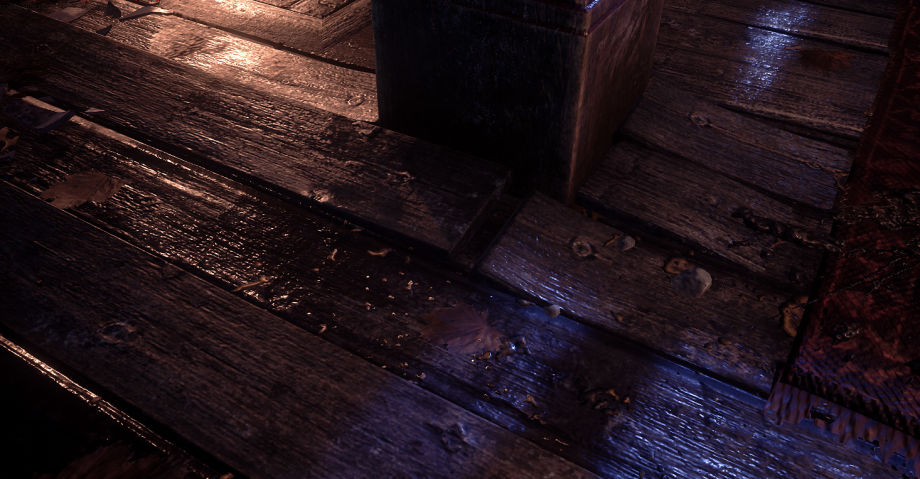 On the second floor there were a lot of different patterns decorating the wallpapers. These were all created with masks made in Photoshop that I moved into Substance Painter, where I could add wear and materials to them. 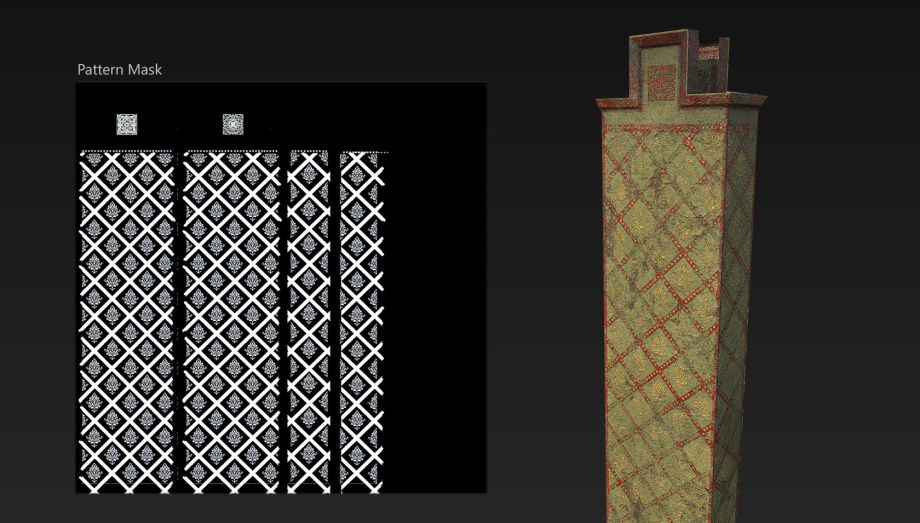 I used Unreal Engine for rendering since it’s really powerful when it comes to the lighting, materials and post-processing, which all are key elements of the mansion.

The lighting generally consists of stationary point lights, which speeds up the baking process and makes iterating much easier than when mainly working with static ones. The lamp, fireplace and back window were my three primary light sources, with some additional complementing point lights around the room. Adding well placed reflection probes also makes all parts of the environment look their bests. 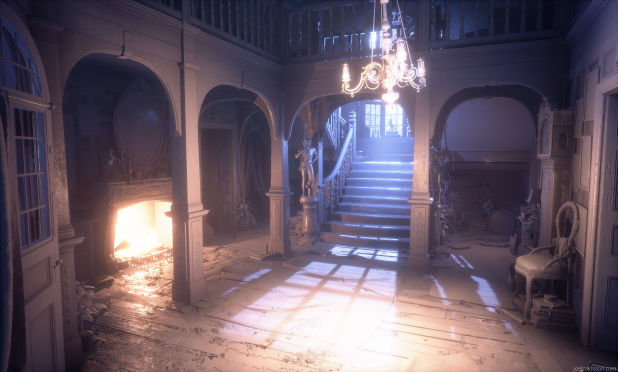 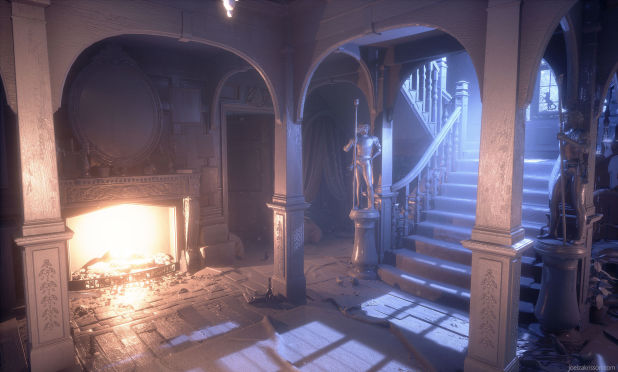 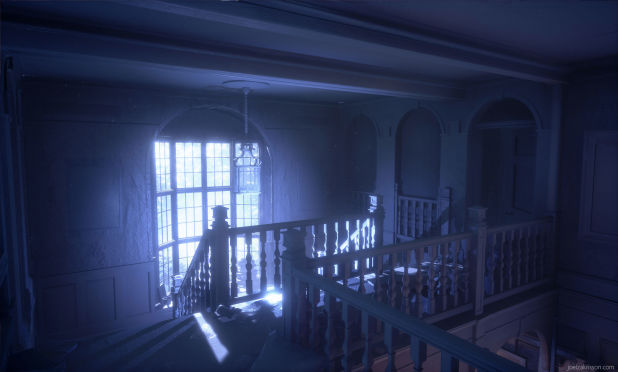 Some solid post processing was just as importing as placing the right lights at the right spots. While all small tweaks had their respective impact, it was mainly tweaking of color tints, contrast, vignette, auto exposure, saturation, and especially bloom that had the largest impact. 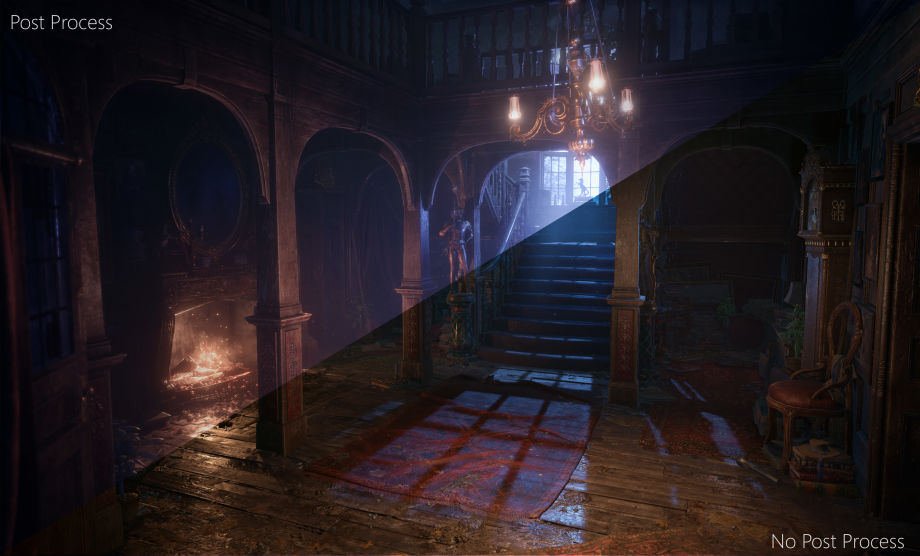 The scene’s soft fog-like effects are all combinations of low threshold bloom, atmospheric and exponential height fog, and a fake volumetric lighting shader applied to planes and spheres near light sources.

The intention behind the mood was to convey the contrast between a safe haven and the darkness surrounding it. While the lit fireplace and lamp are supposed to add to a sense of warmth, the cold light dominating the stairs and the messy dark corners contribute to a feeling of something eerie in the air.

Bright orange and blue lights were balanced with really dark areas, which brought a lot of contrasts to the scene. I managed to sneak in many accents of red in the textures, but also green and gold mixing it up without stealing focus.

I’ve intentionally made the window extremely bright, despite it being a bit unrealistic. Since it’s the room’s major focal point, I made the aesthetic decision to make it really stand out.

I wanted small elements such as books on the floor, muddy footsteps, or a somewhat wrinkled carpet, to suggest human interaction with the scene. This would make the observer imagine a story themselves, rather than telling a story directly, while making the scene more believable and relatable.

All in all I think it’s important to not just copy your reference material, but to improve and design around it, shaping the project into something of your own. That, together with some solid post-processing, is the key to a successful environment!