I’m a 3D artist from Sweden working at DICE as a vegetation artist. I’ve always had an interest in video games and a pretty vivid imagination so working with games was a pretty natural choice for me. I started playing around with Maya and Photoshop when I was about 14 years old and later on applied to a school that focuses on game development called Playgroundsquad in my early 20´s. The School had a 6 month internship period where you basically had to find yourself an internship at a company and finish of your education by getting some real world practice. I got an internship at EASY studios which later on made me come in contact with DICE.

The Beauty of Nature in 3D

I think what intrigues me the most is the amount of subtle variations found in nature that together makes a whole. I like creating vistas for the viewer, even though the environment might be fairly small I like placing distance in the scenes, so there is a sense of depth and you get the feeling you are gazing across something vast and alive.

One of the most important steps is to break everything down into components. For example, if the environment relies heavily on grass I would start by creating that base component so there is a solid base to build upon with other assets. I usually spend some time looking through reference pictures or just images for inspiration and try to lock down the major components needed to get the right feel of the environment, I tend to start with the larger components, leaving detail for a later stage. 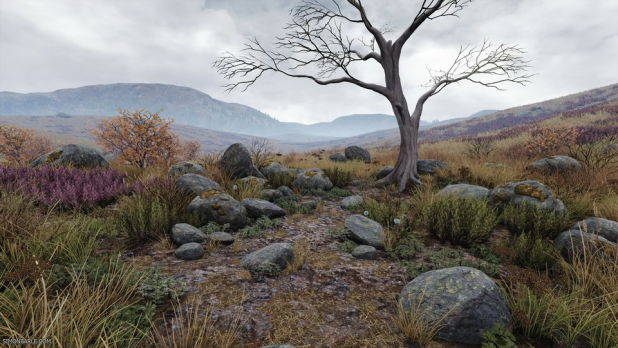 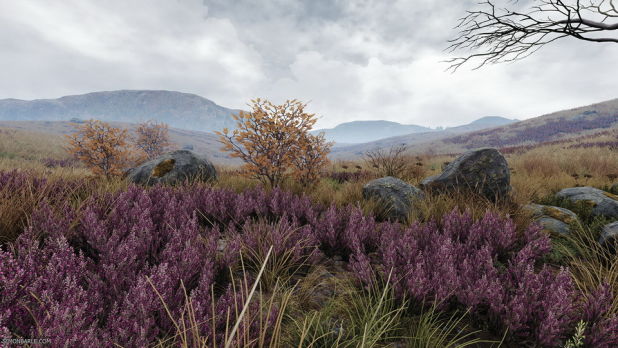 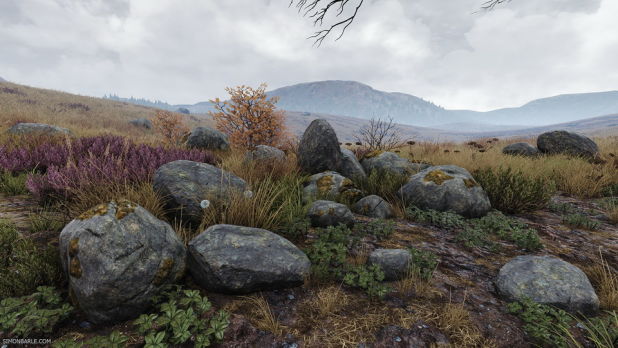 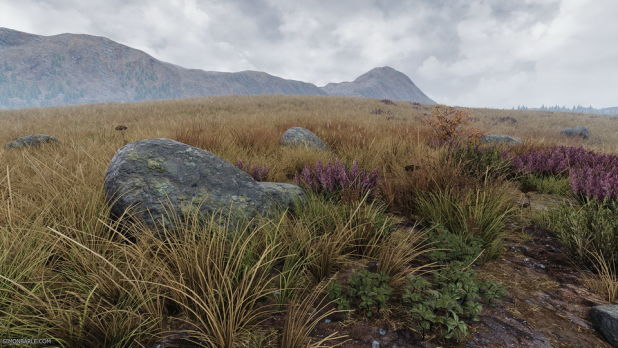 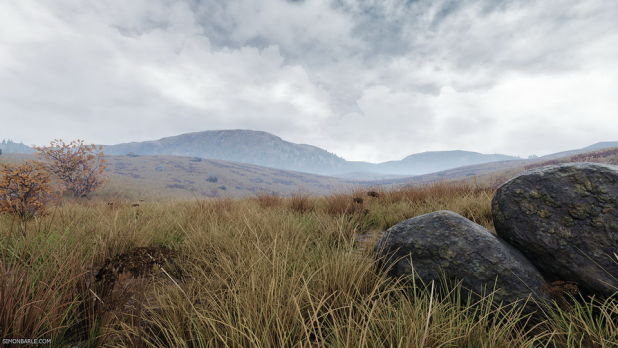 With Scottish Highlands and Huangshan I started with sculpting a really rough terrain blockout with the landscape tools and then got in placeholder representations of the major components of the scene and tried to create kind of a one camera composition that functions as my base as I’m working. This is just to have an anchor point in the world I can always return to and keep working on and once I have something I like I start trying to expand from that base.

For newbies I would advice to quickly extract the basic components the setting needs and start placing them in the world, creating small areas where you can test how everything works together will make it easier to nail the look on a bigger scale later, and of course, controlling the scope of it, sometimes less is more.

Sculpting Terrain for a Detailed Look

I recently started using World Machine but the foundation is usually sculpted inside the engine. The Huangshan scene is purely hand sculpted then dressed with cliff meshes, didn’t really see a need for World Machine at the time since most of it would be covered in the end. 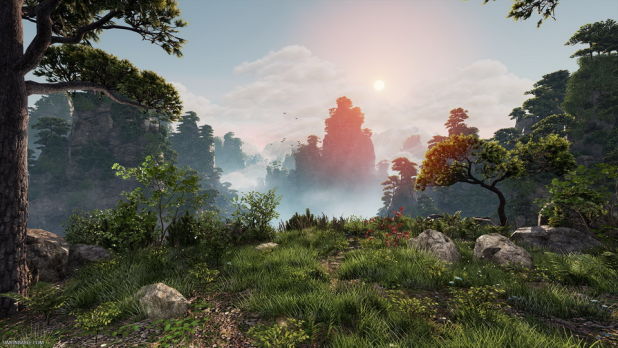 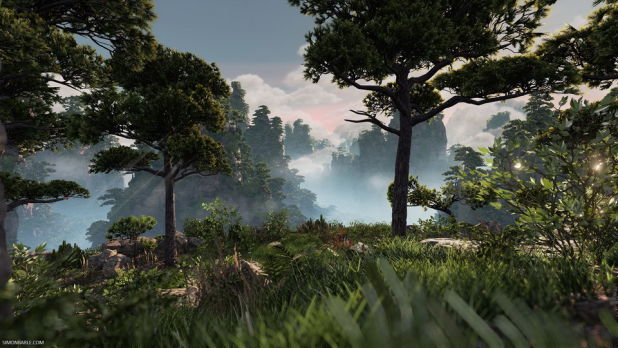 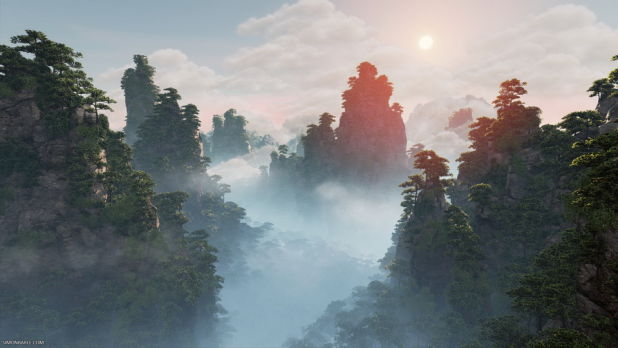 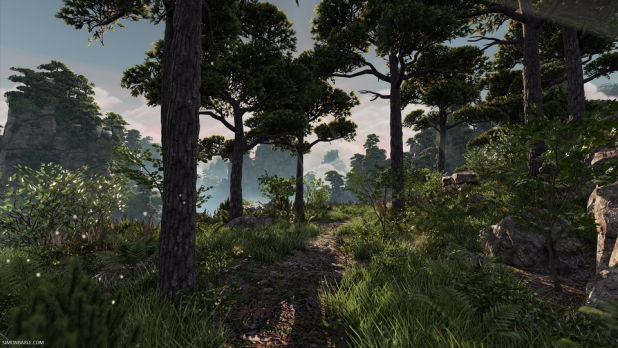 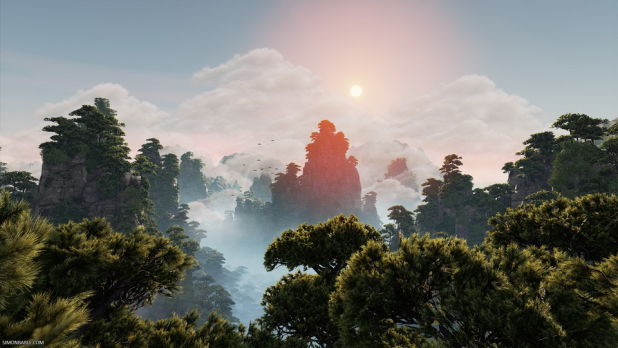 Building such scenes is a pretty complicated task to get it right a lot of times, there is so much diversity and uniqueness in natural environments that is really difficult to copy in modular work-friendly ways. But of course it depends on the number of assets that you have. The Huangshan scene took about 3-4 months to make, working on my spare time in the evenings every now and then. The Highlands scene took a lot less time since I could reuse assets I alrady had to block it out relatively quick.

I build all my assets myself, almost everything of it is highpoly modeled and/or sculpted. I highpoly model most of the vegetation and bake them down to textures. For rocks and similar asset I usually gather some reference and do some sculpting then project photos I take of rock surfaces onto them. I try to re-use as much of the content I can while also iterating and improving on it as I go from project to project.

With Unreal Engine 4 came a lot of improvements to the landscape and foliage tools and that enables artists to quickly sculpt terrain and paint out basic vegetation, together with its user friendly setup it was a pretty clear choice for me to use it for my personal projects. I really enjoy how fast it is to get everything setup and all the features are very accessible. The new rendering features that came with UE4 are very powerful and the improvements to the instancing and Lod transitions makes it easier to quickly optimize the world, keeping detail where it’s needed.

My setup for outdoor environments is pretty simple actually, the base for my lighting is just a skylight and a directional light. I use distance field soft shadows which works pretty well with larger nature environments. Then its just a matter of tweaking the intensity values of the light, balancing them so they work nicely together, tinting them in slight hue variations that complements each other. There are some great things you can do with the skylights AO as well to really help ground the scene in a nice way. In the end I give everything a little push with a color grading texture to balance some of the colors the way I want them. I use dynamic lighting for my scenes as I think it gives the best results and can quickly be changed without any build times. 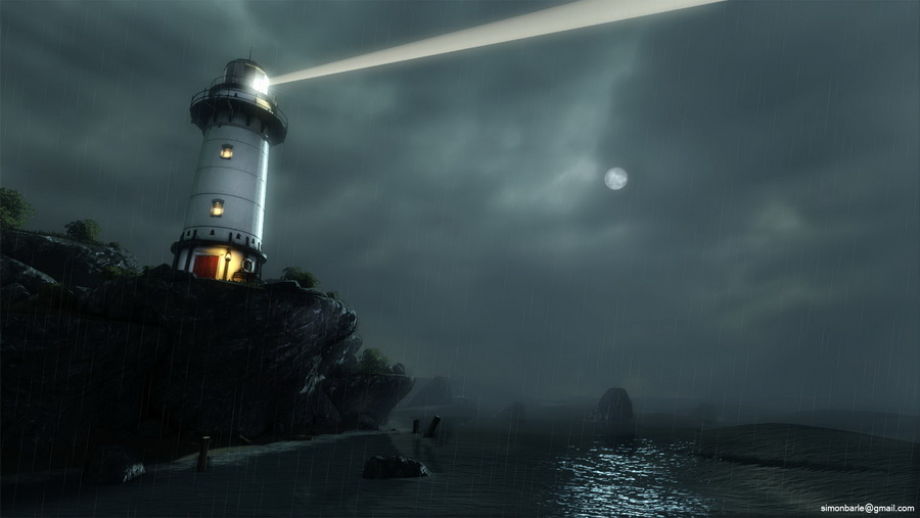 I think The Open World Demo of UE4 looks great and really like that they shared the process and the assets with the community. The engine is pretty well equipped to handle larger worlds now and it keeps being improved upon. I think we will start seeing more projects featuring this tech in the near future.

I use the Height fog and atmospheric fog a lot and play around with some different effects they can produce, like light scattering colors, densities, various sun and fog multipliers. I try to establish some fog early on as is will define the atmosphere for the scene. The effects I create are nowhere near FX artist quality but I do what I can just trying to enhance the environment, like using some pollen, dust, some fake god rays and so on. Its pretty much copying some stuff from the pre-made FX assets in the starter content and switch out the texture, values, spawn rates and some functions. I use them to break up the scene a little more as just using fog can look a little stale so adding some extra fog particles can help and some general dust/pollen goes a long way as well helping it feel like a natural living environment. 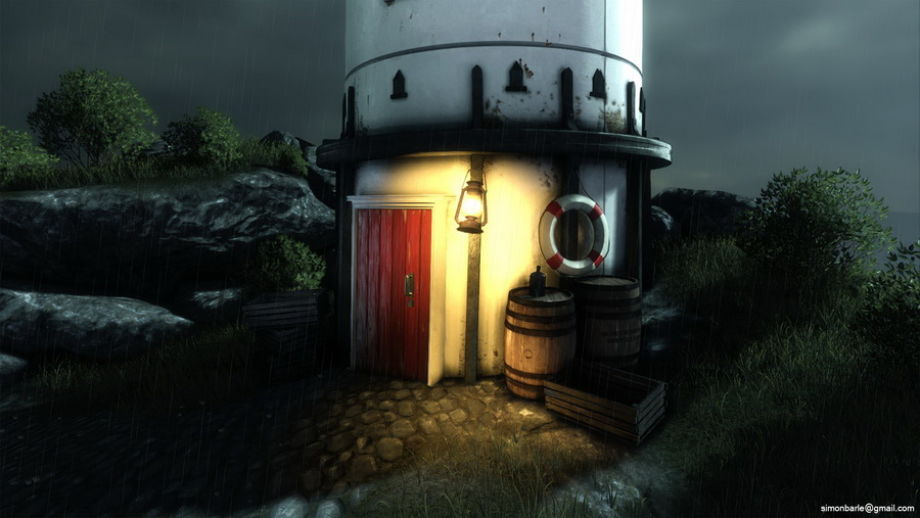 I like to work very modular with my materials, I like creating base shaders for the different materials I will use in the scene and they all have tweakable values for colors, spec, roughness, translucency and so on. The textures and values can be swapped per asset using shader instances.The textures are usually a combination of highpoly modeling, sculpting and photos. I like trying to get the good overall feel of the materials without going into too much into detail. I use programs like Zbrush, Photoshop, Substance Designer and Quixel suite for my texturing.I also try to get outside and take pictures of various surfaces with my camera so I can create stamps, textures and alphas from those photos.