The Team of Project Borealis shared production details on their project that continues the legacy of Half-Life with the help of Unreal Engine.

The Team of Project Borealis was kind enough to share production details on their project that continues the legacy of Half-Life with the help of Unreal Engine.

We’re quite a large team now, with a wide range of skills and backgrounds! Many team members have studied their field at university, and most have many years of experience. We have team members who currently or previously worked at Blizzard Entertainment, Obsidian Entertainment, Ubisoft, and many other game studios, in addition to people who have experience in modding, and other relevant fields. At the end of the day what unites us is our love of Half-Life and a desire to finally experience the third episode of Half-Life 2. 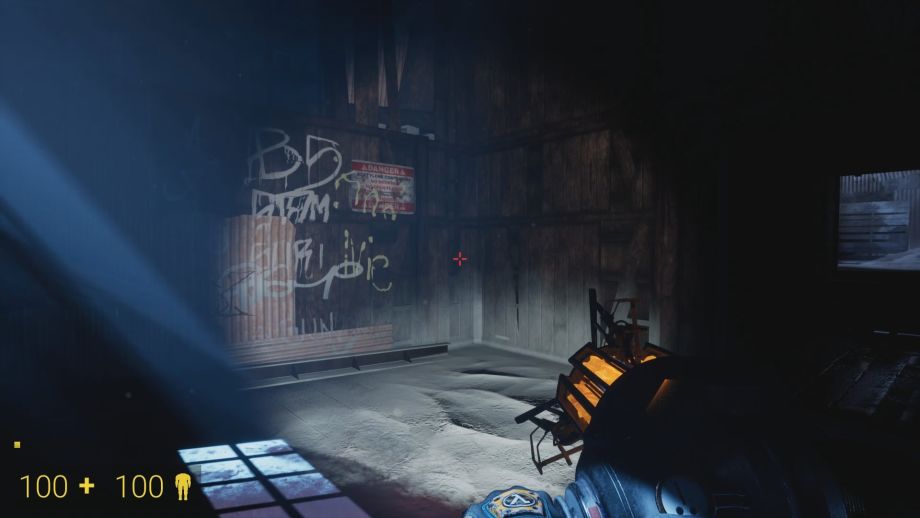 When Epistle 3 was released many Half-Life fans considered this to be proof that Valve wasn’t going to be releasing a Half-Life sequel any time soon, and it wasn’t long before several groups had decided to take it upon themselves to use Marc Laidlaw’s story as a starting point for a fan-game. The subreddit /r/dreamsofhalflife3 was created as an initial starting point for those interested in the project and from there an initial team began to form. To be honest, it was a bit of a chaotic start to a project, but as we kept attracting increasingly skilled talent, a lot of that industry-standard structure started to fall into place. Since then the team has been gradually evolving and improving the project to the point where meaningful development progress could be made.

Working with such a meaningful piece of gaming history and making sure we treat it with the respect fans feel it deserves is definitely a challenge, but at the same time, it’s highly rewarding for everyone involved. We’re fortunate that Valve has established such a rich world with engrossing lore that inspires our new ideas. They’ve created rules for the world which we aim to follow when creating something new, whether it’s a creature, character, or environment piece. In concept art, we try everything. We have lengthy discussions with other art departments and creative directors, as well as in-depth discussions with the writing team. While a lot the visual problem solving is up to concept art, we take input from the whole team given how well-versed and knowledgeable everyone is on the subject matter. We’re never short of Half-Life enthusiasts!

Sometimes concepts can last for a long time until we realize that a specific thing just doesn’t fit within the story, gameplay, or rules that we and Valve have established. One of the challenges comes from finding the balance between giving everything a much-needed facelift for current generation hardware while staying true to the unique and iconic designs we know and love. This is where we rely on our writing team to see how much change is actually warranted and logical from a narrative perspective.

The great thing about Unreal Engine and modern game development is that there are so many great resources and tools easily available to development teams both big and small.

For us, the best selling point of Unreal 4 is its pipeline. We feel the iteration opportunities it provides us massively increases our productivity. It’s also flexible enough for us to feel confident in matching Half-Life 2’s gameplay and aesthetic details despite being a new – albeit much more modern – engine. This was our top concern early on when we were discussing our choice of engine and we hope our fans can see the progress we’ve made towards recreating that familiar Half-Life 2 gameplay.

On the art side of things, our artists using a wide range of tools to create content, ranging from Maya, 3ds Max, and Blender, to Zbrush, Quixel, and the Substance Suite. Most modern authoring software solutions can output the types of files we need to import into Unreal, and that flexibility allows us to play off the relative strengths and weakness of each to find a solution that works for us while maintaining a cohesive art-style. From an art perspective, Unreal is one of the most accessible and artist-friendly engines available today. The ability for artists to get assets into our scene and have them looking good without having to write a single line of code or fuss with complicated import/export processes and unsupported tools means we can spend more of our time asking ‘How do we make this as good as possible?’ and less of our time asking ‘How do we make this?’. 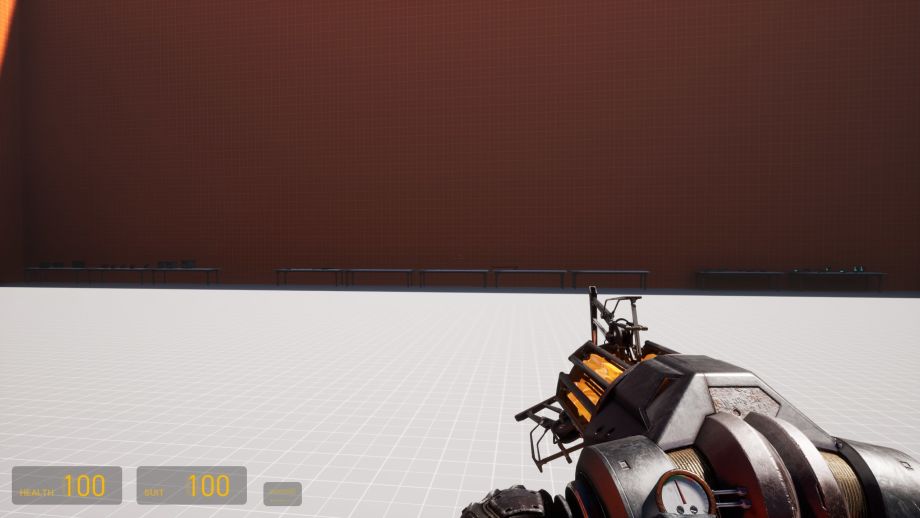 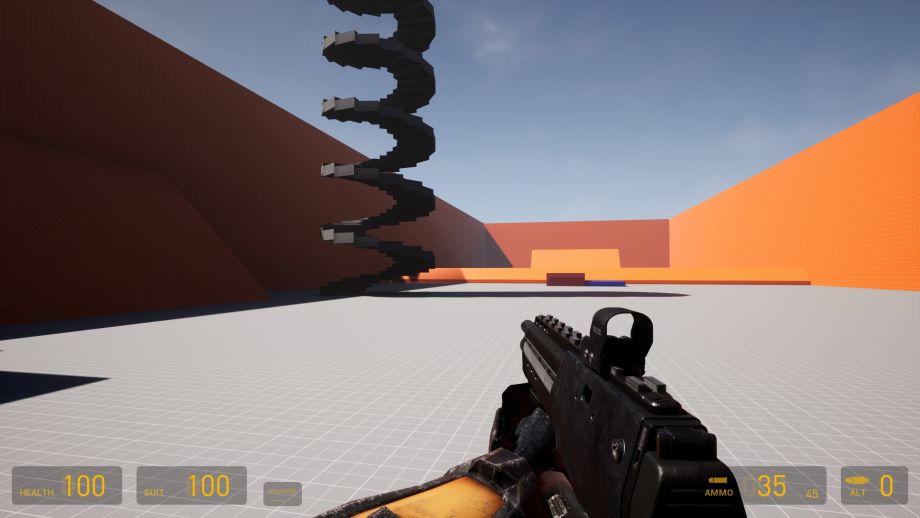 Within a vacuum, each gameplay element is actually surprisingly straightforward to implement. Half-Life is a great example of many simple functions producing a great deal of apparent complexity. Even the game’s many beloved quirks emerged later on as design elements which players have come to expect from a “Half-Life 2” game. That not only says a lot about how Valve approached technical problems but also shows how passionate the community is at finding these many emergent edge cases and establishing them as features. But these features aren’t in a vacuum, so our real challenge comes from implementing these many simple features in a way that ensures they all interact well together in a new engine.

In the end, though, our objective isn’t to replicate every little detail of Half-Life 2 exactly, it’s to make an enjoyable finale to the episodic Half-Life 2 series. If porting over a feature in its entirety is going to make our fans happy, then we’ll try to do that as best we can. That’s why we’ve ported over specific movement mechanics like air strafing and bunnyhopping using specific documentation, algorithms and speedrunning tutorials. But more often than not, there are cases where things can be built upon and improved which will improve the overall experience. To that end, we’re making bigger changes for AI so that combat experiences will be more engaging. So to us, when we’re making these features in Unreal Engine 4, it’s helpful to consider the reasoning behind what makes each gameplay element enjoyable to fans. When you start to realize why things were added in the first place and why they were enjoyable, it becomes much easier to make new, interesting ideas and self-limit our changes within a scope that we feel will result in a Half-Life 2 game the community can be proud of. 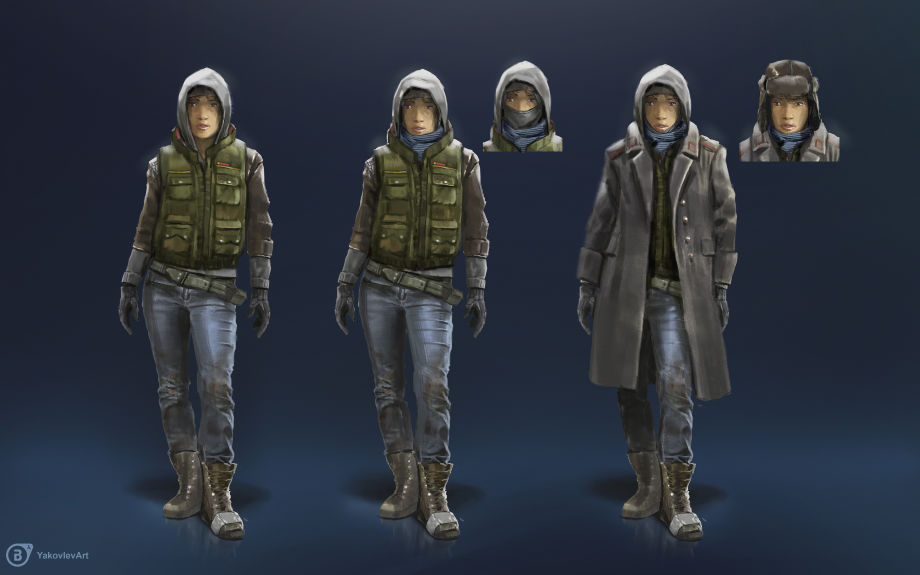 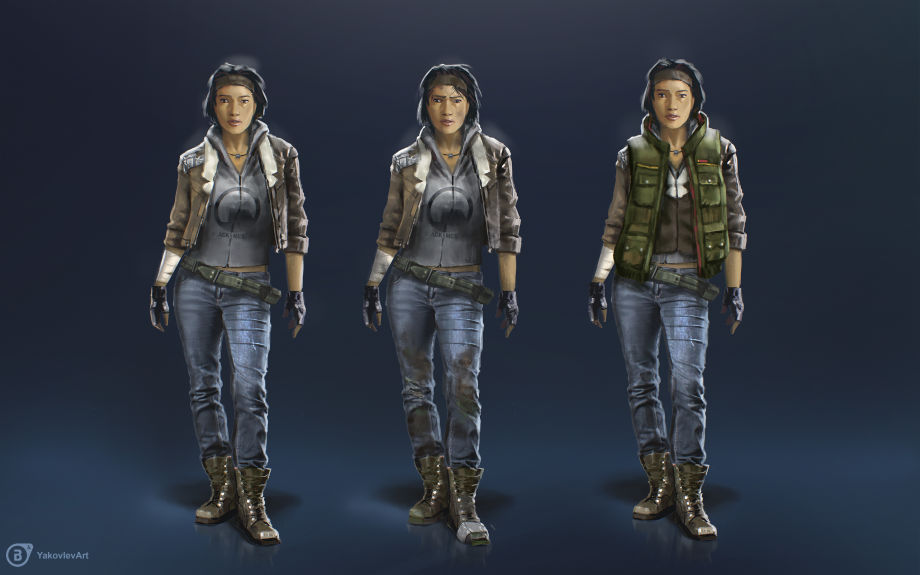 To illustrate our point, fans have told us time and time again how much they love how crisp and responsive the movement in Source is, and how mechanics like air strafing, bunnyhopping and accelerated back hopping are important to them and add to the game. This indicated to us that we should really be looking at the specific implementation, in this case, to get the velocity calculations right. We used a lot of available code, documentation and speedrunning tutorials to implement the movement very precisely. But just as movement is a great example of something we’d like to straight port over because of how valuable it is to fans, it’s also an example of something we’d like to iterate upon to make a better game. One part of the movement we haven’t heard much fanfare about is how ladders are handled in Source. Source ladders are almost infamously cumbersome and delicate, so instead of going ahead and assuming any straight Source ports make for a good game, we’re actually starting with the Source version and then analyzing what improvements could be made. In this specific case, it’s seeing what players like about Source ladders and what’s giving them trouble and how we can fix that.

With all that said, there is one big exception to this approach: AI. This is an area we’ve just looked at separately and found many ways to add more gameplay value and entertainment for our audience. A lot of things are still in the works here, but we really want to build much more dynamic combat scenarios that keeps players on their feet. We’ve found the original games felt a bit lacking in this regard, due to map layouts, some AI design choices and rushed balancing. That being said, Valve made some notable strides with their AI later on in the series, with the introduction of the Hunters found in Episode 2.  We take a lot of inspiration from them and so our approach has been to make the enemies Gordon faces much more intelligent and threatening to really force the “Run. Think. Shoot. Live.” flow we want players to experience in a Half-Life game. The ultimate goal we’re striving for is to not only improve upon how existing enemies fight against Gordon but also add new subtle behaviors which we’ll use to fill certain niches in the various combat environments the player will go through. This has proved to be a super interesting space for us and we hope to share more in the future.

Translating a script and setting into concepts and then to in-game art is always a little bit of a dance. The writing team’s story defines the initial bounds of a scene. Our artists then realize it visually, referencing previous Half-Life games and research in order to produce a range of sketches and paintings, fleshing things out along the way or trying different options. Our 3D and Level Design teams can then take those concepts and start bringing them to life in the game engine. We’ll break down which assets can be re-used from other scenes, and which ones need to be modified or newly created. We work with the concept artists to create additional specialized references for any objects or assets in the scene that need it. This back-and-forth continues as development progresses until we reach a point where we’re satisfied with the look and feel of the level. 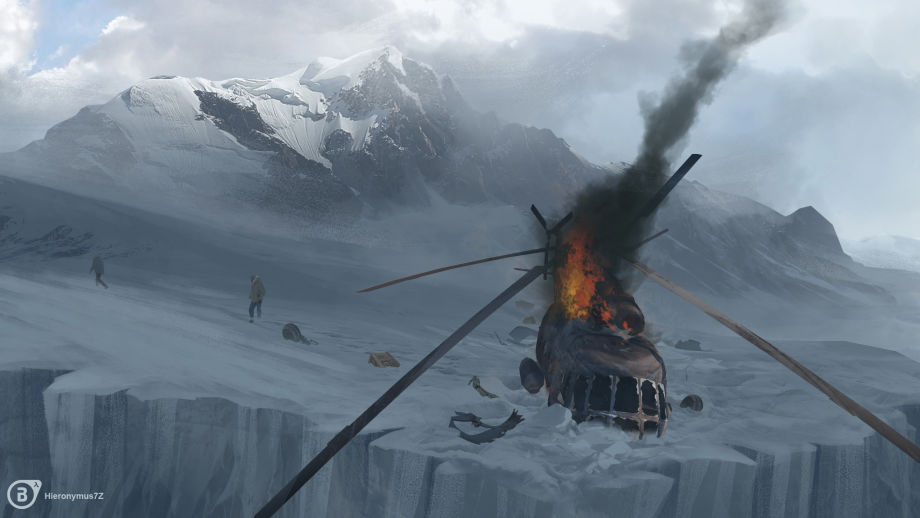 Our current aim is for the game to be around the lengths of Half-Life 2 Episode 1 and 2. Gameplay wise, really want this game to feel like the natural next step from Episode 2 – we’re not planning to add major new gameplay systems or change the feel of the game substantially, and we think aiming for the same length makes sense given the way Valve originally intended the series entry to end.

From a tech perspective, our immediate plans are to release a performance test demo. This will be a non-interactive benchmarking tool we intend to use to measure how our current development parameters currently affect the various PC hardware setups we expect players to run the game on. Optimization is a big focus for us – we want as many players as possible to be able to experience the game without technical difficulties, so to us, this data helps us avoid any potential performance pitfalls later on in development. 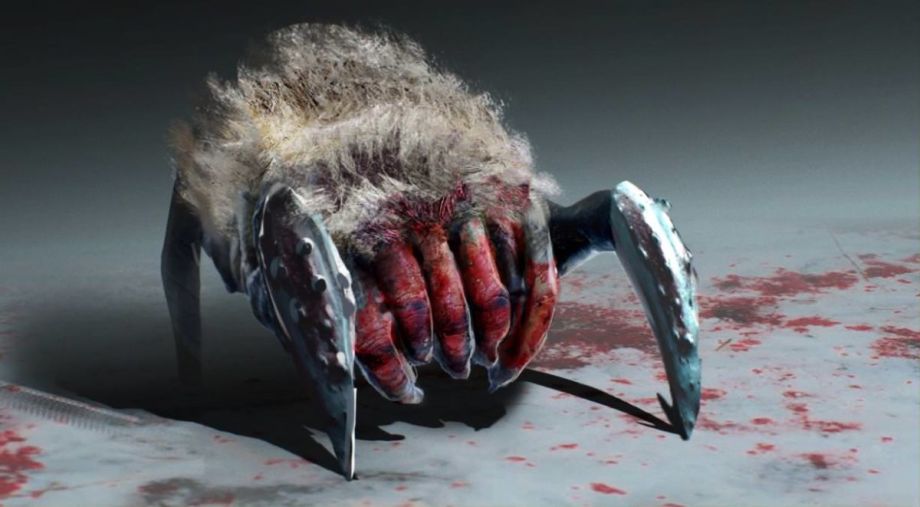 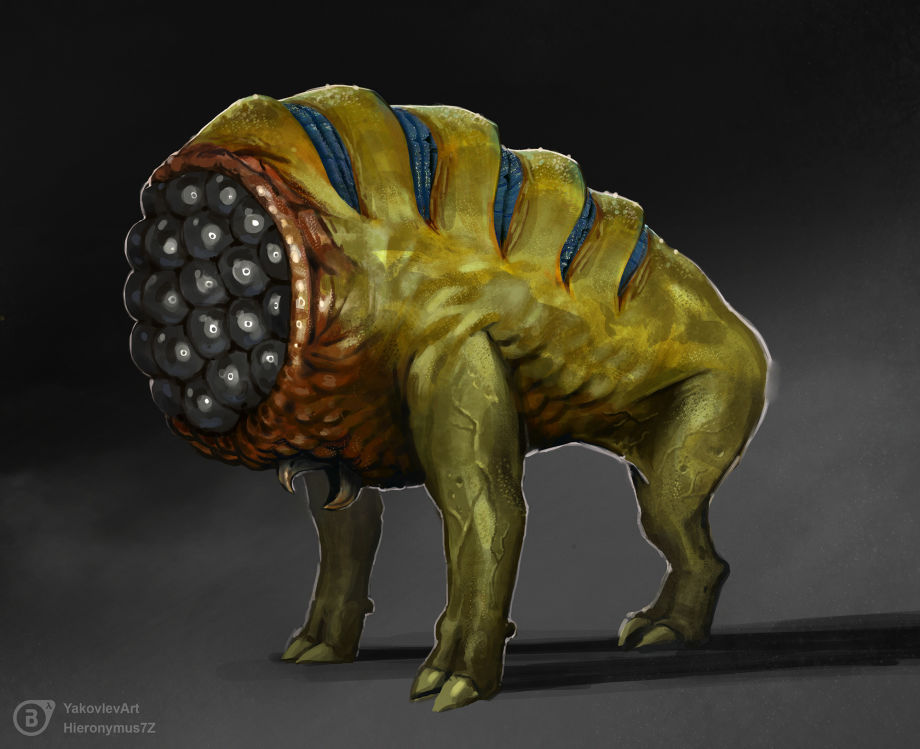 As we recently announced in Update 4, we’re also working on a public tech demo set within an old favorite, Ravenholm. This will give fans a chance to get an early look at how we intend to present Half-Life 2 within Unreal 4. Fans will be able to test and provide feedback on our gameplay systems so that we can make sure we perfect the feel of Half-Life 2 as we move forward with development.

Beyond that, our team has internal milestones we strive to meet and while we do have a projected development timeframe, we don’t want to promise anything at this stage. It’s still too early to discuss release dates! 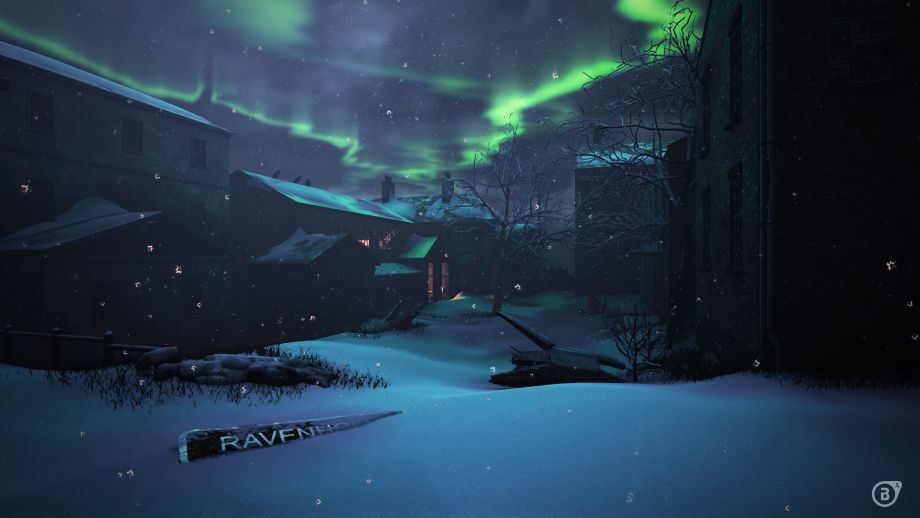 We don’t currently have any relationship with Valve. We’re hoping that changes as we continue moving forward with development, but given Valve’s track record with other fan and indie projects based on Valve’s IPs, we do feel hopeful the studio continues to support its fan creators.

The Team of Project Borealis