Augustas Krivelis broke down the production process of his UE4 scene, The Yard, and talked about work with references, texturing, materials, scene assembly, and more. 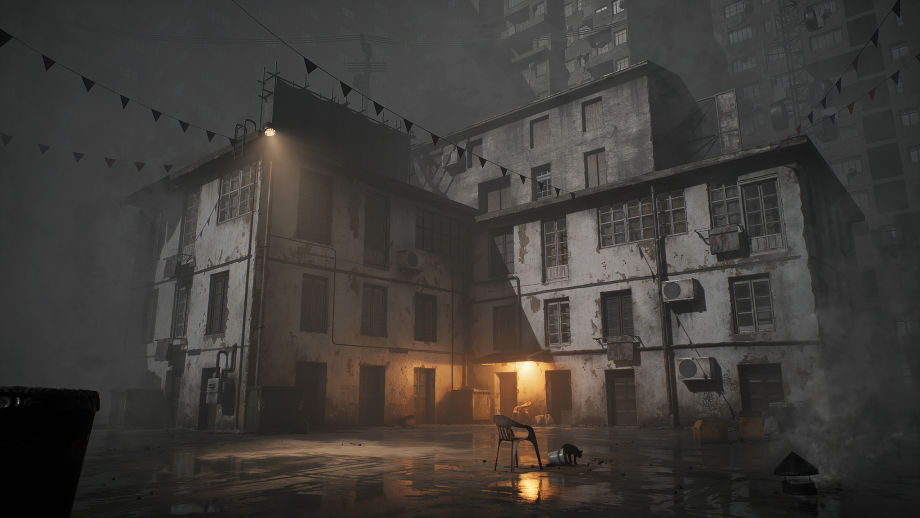 Hi, my name is Augustas Krivelis and I’m a self-taught environment artist currently trying to work my way towards that first job in the industry.

My path leading up to this point was a bit chaotic, or at least that’s how I’d describe it. Long story short, it all started with the initial idea to become a concept artist back when I was still in high school. Then a few years of constant direction switching and indecision followed. During that time I constantly kept picking up and learning new software, trying out various workflows, and dabbling here and there in anything ranging from 3D modeling to graphic design or photography. However, as time kept passing by, I realized that this could potentially last indefinitely, and I needed to make a concrete decision and stick to it if I actually wanted to get somewhere. So I took some time to reflect and ended up settling on the path towards environment art a bit over a year ago.

Start of the Project

Way before starting the project, I knew that for the next environment, I wanted to work from a concept and mainly focus on attention to detail and work on my modeling and texturing skills. A few months back, I was browsing various concepts and saw this piece by Max Steksov. I really liked the moody atmosphere, pretty minimal lighting, and the overall texture that the scene has. So I thought it’d be great practice trying to recreate it in UE4, and luckily, I got the green light to go ahead and do so.

Like any other project, the start of this one began with gathering reference, so I opened PureRef and started digging through the Internet… I tried to look for all kinds of material references that had characteristics similar to the ones in the concept, and soon I ended up with this board. 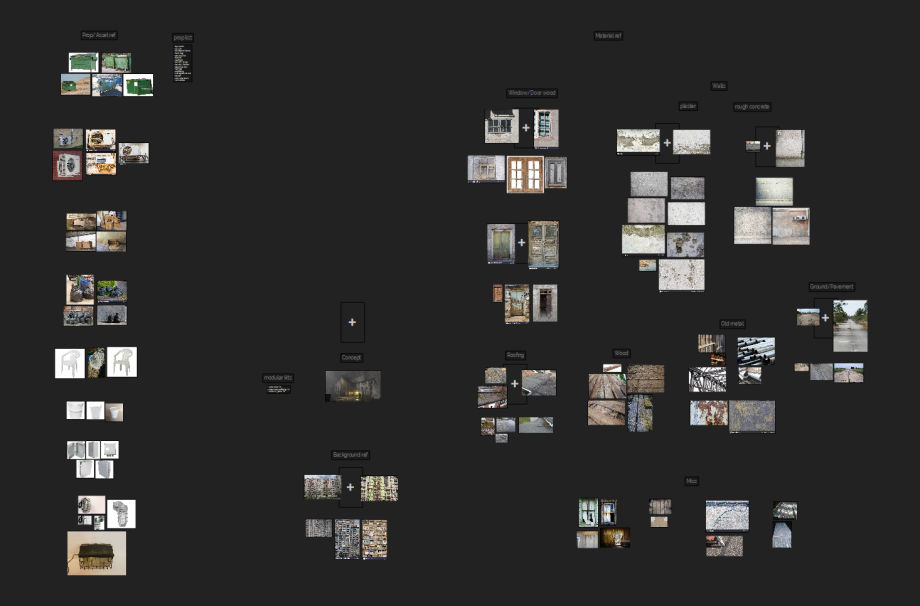 Throughout the production process, the main concept was still the primary reference point for things like albedo value, hue, and saturation. But for the close-up details, reference photos were incredibly useful.

Since I had picked a concept to work from, but didn’t have the original blockout that it was painted over, I decided to use fSpy to help quickly set up the scene in Blender. fSpy is a simple, open-source program that helps you figure out the exact properties of the camera used in the image that you’re trying to match. 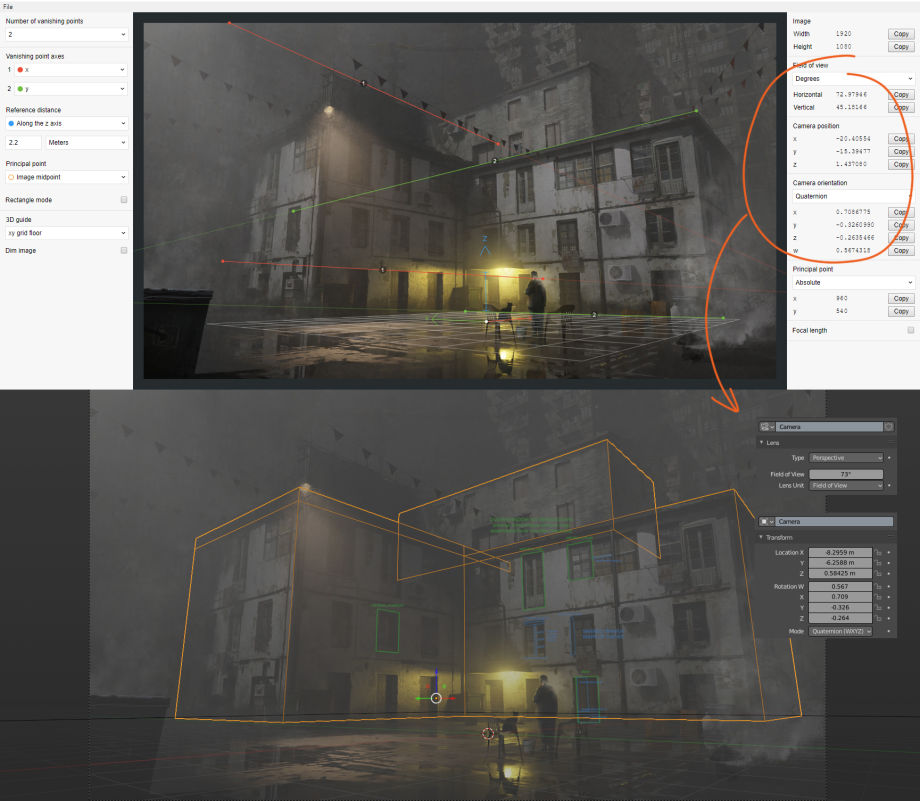 This method works really well when the image has clearly visible straight lines going perpendicular to each other on the XY plane, so in this case, the set up was very quick. In other cases, there’s quite a bit more tinkering required to get the match more or less correct.

After getting the main proportions right in Blender, I started to transfer the scene over to UE4 and continued to block in all the props and lights.

I initially planned to make the main building out of a modular wall kit, and in a sense, I guess I still did, however, I decided to combine the kit pieces into a few large wall modules.

I did this primarily so that I’d have the ability to slightly alter the size and positioning of each window and door without clipping the kit pieces to add that extra “realistic imperfection” to the building since it clearly looks like it wasn’t built with the highest standards in mind. This also helped dodge any potential issues with texture seams and uneven lightmaps too.

Here’s what I mean by those extra imperfections.

Probably not many people notice this, but I think this adds the kind of detail that subconsciously makes things feel a bit more interesting, even though you probably couldn’t tell why at first glance. Or... maybe I’m just overdoing it in this case.

For the actual windows and doors themselves, the approach was very straight forward. 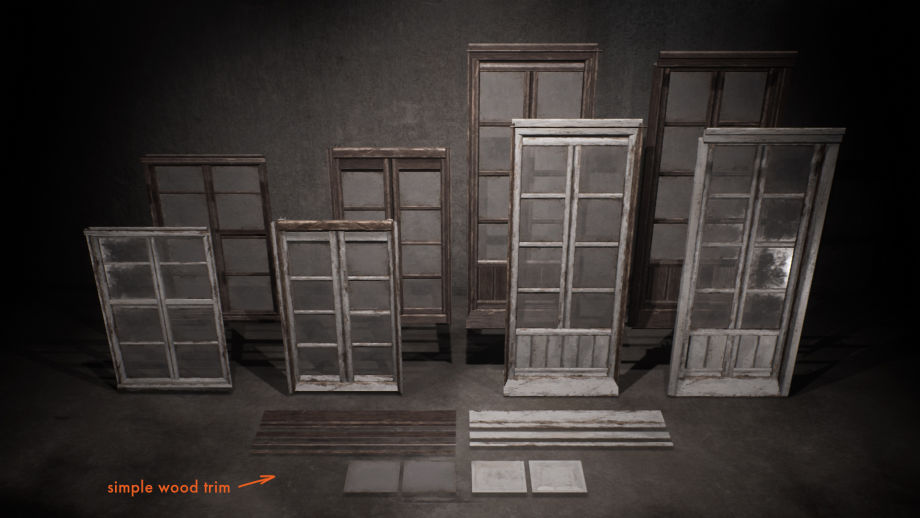 I created a simple wood trim kit, textured it in Substance Painter, and made all the windows and the door out of it.

I’m no Substance wizard when it comes to materials, so my approach to making them in Designer is pretty basic. At the moment, I just try not to make them too noisy and focus on avoiding obviously repeating patterns.

I wrote down a short list of textures that I needed and made them along the way as I was working on the scene. This is what I ended up with by the end. 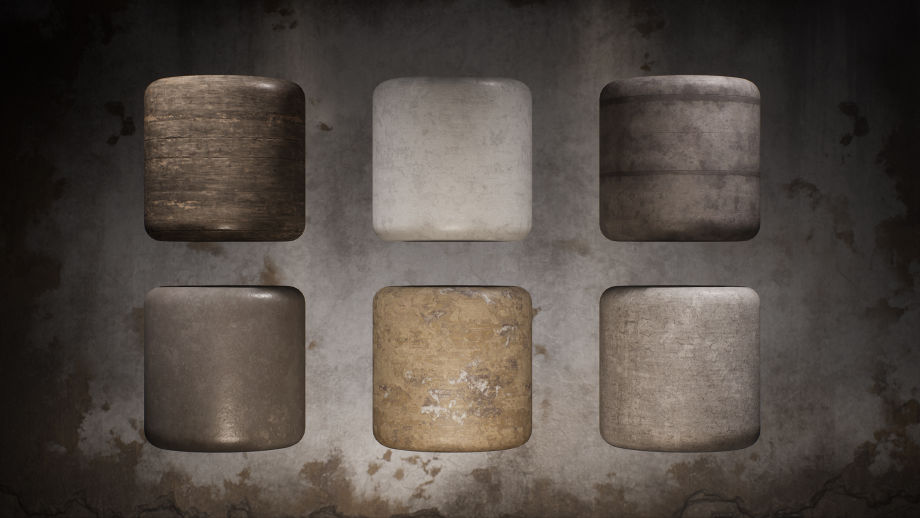 They’re quite plain on their own but work well when combined with vertex painting and decals, which actually brings me to the next section.

Because the base materials were quite simple, I could combine that with vertex painting to have more control over the detail distribution, since the detail would be not in the textures themselves, but rather in the transitions between them.

Here’s a breakdown of my approach to texturing the walls.

As shown in the gif, I’ve used 3 vertex color channels for blending the dirt, damage, and color tint layers. This is the master material used here.

Basically, just a few groups of textures mixed with each other by using HeightLerp nodes. Most of the other nodes aren’t really necessary, they’re just there to adjust things like the roughness values and UV tiling in the instanced materials.

I’d like to point out the importance of how the HeightLerp height texture is set up when trying to achieve something similar to this. I tried to make sure that the texture had a fairly even and fully utilized value range. This made the texture details more apparent and transition between them consistent throughout the vertex value range all the way from 0 to 1.

To make the damaged edges, I used floating geometry strips with a separate material ID applied to them. It’s a pretty simple, but very versatile technique. I’ve outlined the general steps of it below.

Starting out with a high poly, I baked it down to a trim and tweaked the result in Substance Painter, then applied the texture to floating geo. That would be the basic explanation, however, for a way more elaborate one, I’d highly recommend checking out this tutorial by Leonardo Iezzi.

Damage seen at the top and bottom of that wall (POM decals) was also done in the same way, only difference is that the material uses a parallax occlusion mapping node for that appearance of depth.

My approach to texturing the props for this project was based on the one covered by Gianpietro Fabre in his Wastelander texture breakdown series. After baking down the highpoly, I picked the base materials for each material ID and then simply layered various maps on top with differing albedo, roughness, and height values to get the I look I was aiming for. I also used the paint layer on masks to manually add certain details like leaking rust or edge damage in specific areas. 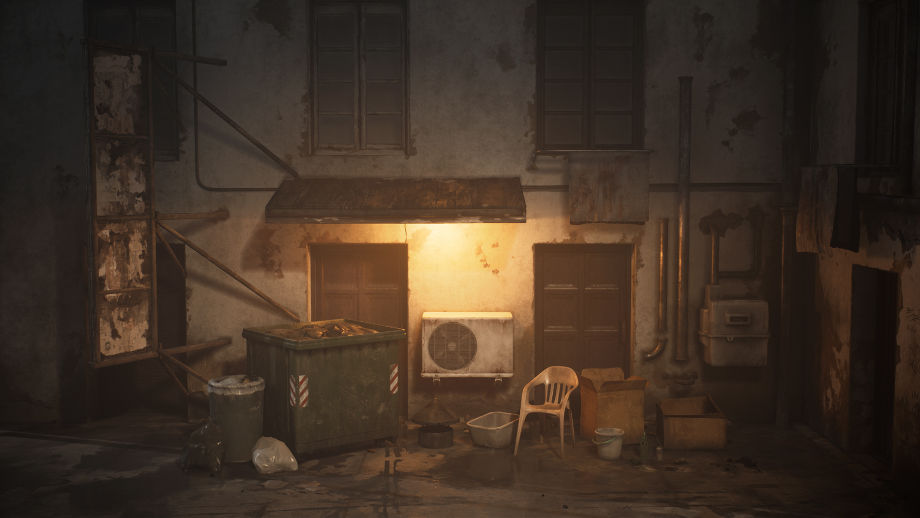 In retrospect, I should’ve probably spent an additional week to retexture all the props. They more or less work in the scene, but I'm not sure that they would hold up well enough on their own...

The ground was done in the same way as all the other flat surfaces. So tiling textures with 3-way v-color blend + decals, they also all share the same master material.

The puddle decals for the ground were done in Photoshop. I chose to paint the puddle decals myself, rather than rely on tiling textures, to try and stay true to the original concept. The ground texture was a part of what I liked about the artwork, so I wanted to make sure that it’s aesthetic made it into the 3D scene, too.

When building out the scene, I first made sure that everything was in place and followed the concept while still in the blockout form. Once that was done, then it’s pretty much just texturing and refining the assets until everything looks good enough.

As for the composition, since it was already set up in the concept, the only thing I did was some minor changes to the foreground. I wanted to move the scene forwards in time a bit and maybe hint at some kind of minor story developing there.

The lighting was set up very early. The basic material that I applied during the blockout had a brightness value of 0.5, so I could spend time to make sure that lighting looked correct right away, and not worry about having it look completely different when I’d eventually start adding materials since most of them would still hang around the 0.5 area.

The only major differences in lighting between the final and the blockout were a few intensity changes and the switch from yellow to orange for the door light, credit for which goes to the guys over at ExperiencePoints discord. In the end, I have to agree that it looks better this way, so big thanks to them for making the suggestion.

As far as the technical side goes, the whole scene only has 5 lights - directional sunlight, skylight, one point light, and two spotlights one of which is stationary, casts no shadows and is there purely to alter the shape of lit up the volumetric fog. All lighting is baked.

Post-processing is something I try to be very careful with. I can’t count the number of times I went overboard with things like contrast, saturation, and exposure back when I was starting out. So the final images don’t look that much different from the raw screenshots, the only difference is a slight increase in contrast.

The settings of the post-processing volume I used are also very close to the default ones. Some of the changes I did were to lock exposure, tighten up the AO a bit, and add a very subtle amount of film grain. In the end, I also threw in an old sharpen post-processing material I had laying around from some of the older projects, and that was basically it.

Surprisingly, the production of this scene was a quite smooth and straightforward process. That being said, mistakes were still made, and I still managed to learn quite a lot from this. Dedicating more time to work on the props would’ve really helped. And while I mostly stuck to the concept, it probably ended up being a bit of a double-edged sword, I think I managed to match the artwork quite well, however, I could’ve also taken the original concept and expanded it further.

Either way, it was great fun working on it, and I hope that in my attempt to cover the process here someone will find something of value.

Thank you for reading.