Developer from Derby decided to bring back the days when gamers could enjoy World War II shooters. Developer team is

Developer from Derby decided to bring back the days when gamers could enjoy World War II shooters. Developer team is called Buklhead Interactive and it is planning to release its game running on Unreal Engine 4 for PC, PlayStation 4 and Xbox One.

Bulkhead Interactive is formed of two companies “Deco Digital” and “Bevel Studios”, who have worked together in the same office for the past 2 years. Previously the team released “Pneuma: Breath of Life” across major platforms.

We were the first team to release an Unreal Engine 4 game on a next gen platform, we’re currently one of the most experienced UE4 development teams. Our team was nominated for a Develop Industry Excellence Award in July 2015. We have a top calibre team formed of hard working and creative developers who have released titles on Xbox One, PlayStation 4 & Steam. Operating out of our Derby studio in the heart of the United Kingdom, we have a solid plan and a proven track record of getting games out to players.

Games like Medal of Honor and Call of Duty were damn good back in the days and the studio behind Battalion 1944 is ready to bring one more. And to prove that, they’ve got a video for the potential buyers:

Battalion 1944 features scenes like the streets of Carentan and the forests of Bastogne. Weapons include the Kar98, the M1 Garand and the Thompson. Developers insist on authenticity, which is crucial for the atmosphere.

Game will be about «raw skill», so there won’t be any augmentations from modern Call of Duty. You can support this project by helping to collect £100,000 on Kickstarter, another £100,000 will be collected by developers.

Also, developers presented a pie chart for the potential buyers: 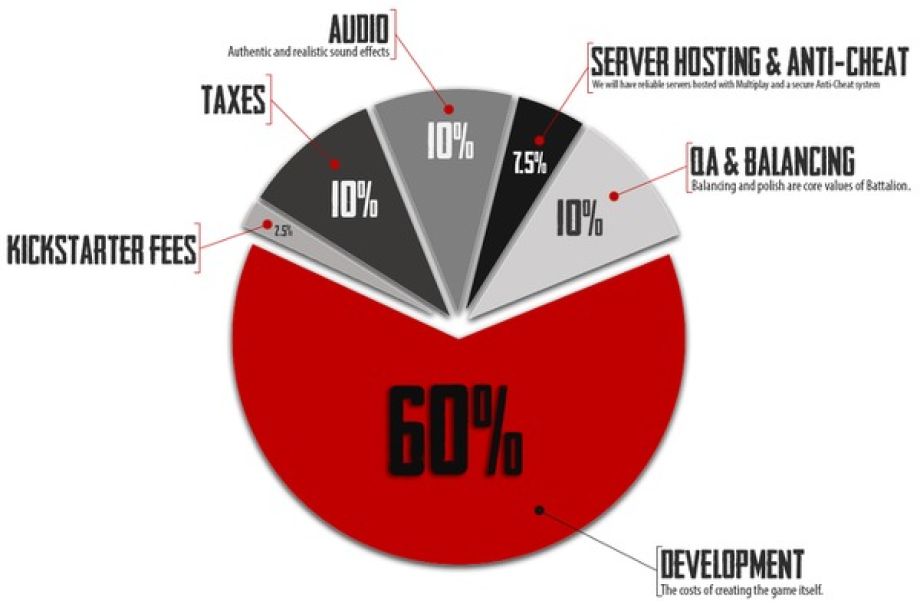