The Cascadeur team provided an overview of the classical approach to animation, its drawbacks, and solutions implemented in their software package to help artists create physically-correct and believable animations.

Physics In Animation or When Classical Approach Is Not Enough

When watching movies or playing video games, sometimes we notice scenes that don’t look right. Most of the time, though, we can’t explain what exactly is wrong. We might not see the wirework on the actor, for example, but we intuitively know that his/her movement is not how it should be.

That feeling doesn’t deceive us, however. Our brains can easily recognize unrealistic movements. In other words, we always notice when the animation is physically incorrect.

Modern animation can be incredibly complex and takes a lot of time to make. It is created using real-life references and motion capture data. Yet we keep encountering these issues again and again. Why is that?

Surprisingly enough, part of the problem is the immensely popular Disney’s 12 principles of animation. They work well, and they are good at showing how to create animation. But they don’t tell us anything about making this animation realistic.

These principles were introduced in the 1930s and are still used as a foundation for modern-day animations.

In 2002 Jeremy Cantor, a supervisor at Sony Animation, supplemented Disney’s 12 principles with another 12 of his own. They improved the understanding of how to create better animation by introducing forces applied to characters. These forces can be internal, such as weight or muscle movements, or external, such as gravity or interaction with air, water or other characters.

However, these forces have to be applied manually by an animator. They can improve the look and feel of the animation, but they won't really make it more lifelike. The key to creating realistic animations would be taking into account real physical forces applied to a character, and where these forces come from. That’s the kind of problem that motion capture can help us with. Since it’s done in real life, it will capture movements that are naturally influenced by these forces.

However, motion capture is not always the solution either. Mocaping even a simple scene with a horse implies that you need to rent spacious premises, pay for feeding and grooming the horse, pay for the cleanup afterward, etc.

But at least you will have no problem finding a horse - it exists in real life. When you need a dragon or a superhero, mocap is helpless.

The strange thing is that with every passing year there are more and more tools for making realistic images, rendering, simulations, and shaders. Only animation isn’t a part of this trend.

When our general producer Eugeny Dyabin started working on the first Shadow Fight prototype, he was very surprised to find out that the most essential tool for making realistic acrobatics - the center of mass, is not included in any existing software. In fact, even today animators mostly rely on video references and create realistic movements manually.

Our series of fighting games called Shadow Fight heavily relies on animation. The project got immensely successful and received lots of praise for its realistic fighting moves. It wouldn’t have been possible, had we used just video references and mocap. One of the reasons behind this success is that we’ve built Cascadeur - a tool for creating physically correct animation in our games.

Cascadeur has been in development for about 10 years, and during this time we learned that we only need to accurately compute the main characteristics of the motion to make it realistic. These characteristics are the center of mass, angular momentum, and forces at fulcrum points.

The center of mass is one of the most important points of a character. It determines whether or not the character can keep balance in a pose.

Check an example from everyone’s favorite Mortal Kombat. Kitana makes a kick, which looks rather unrealistic and strange. Given her pose and the way her center of mass moves, she should tumble forward and fall, while kicking like this.

Here is how a similar movement would look in real life for comparison. A man who’s doing the kick rotates a bit though, but unlike Kitana, he has no intention of hitting anyone and is able to keep his balance.

The center of mass is a very inert point. It can’t gain or lose energy quickly, so its trajectory should always be smooth, while trajectories of the character’s body parts can be very sharp. 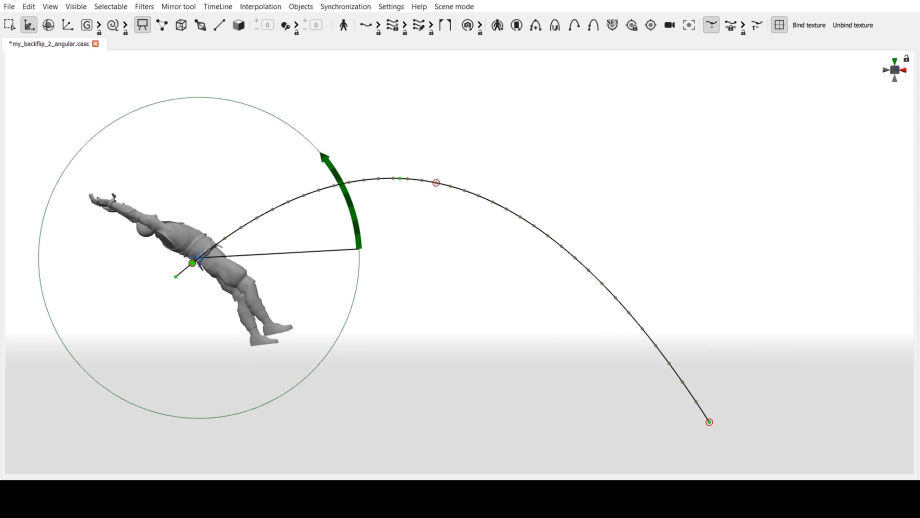 Another thing to remember is that if a character is in the air, the trajectory of his center of mass should always be parabolic no matter what movements he performs. It moves ballistically, and nothing can change it.

Cascadeur has an instrument for creating these ballistic trajectories. An animator only needs to create a curve, set up the starting and ending poses, and add some animation in between if needed. The height of the curve can be regulated manually and will determine how much time a character will spend in the air.

Once everything is set, Cascadeur builds a trajectory and all we have to do is snap the character’s center of mass to the ballistic curve. The result is a lifelike, physically accurate flight.

Angular momentum will determine how a character will rotate or spin in any given pose. It’s a product of the character’s moment of inertia and rotation speed.

The arrow in the image represents the speed of rotation. When the moment of inertia is high, the character rotates slowly, as the arrow needs more time to go through the full circle. When the circle is smaller, the arrow rotates faster.

A good example is an ice skater. She rotates slower with a stretched-out leg than when her body is tightened up.

Angular momentum is like a center of mass - a very inert value that can’t appear or disappear suddenly and should fade out smoothly. It also preserves its energy in midair, when there are no fulcrum points. So the energy you have when you begin rotating is the energy you’ll keep until the end of your flight.

All these details make it virtually impossible to manually create realistic animations of spinning in midair because the rotations in the frames should be so precise. But Cascadeur has a dedicated tool for this task.

All we need is a draft animation - a starting point, a point of landing and some in-between frames. Then our algorithm will calculate the exact rotations that should happen in these in-between frames and produce physically correct poses.

Fulcrum points greatly affect character movements, so physical tools need to recognize them when helping us make realistic animation. When the action force at the fulcrum point and the force applied to the center of mass lie on the same line, there is no contribution to the rotation. When they do not, the character starts to rotate.

Cascadeur is able to visualize these forces for us and take them into account when predicting the character’s movements, so we can model certain situations.

For example, we want our character to assume a particular pose after jumping on a column. Our software can automatically calculate all the necessary rotations, taking into account this fulcrum point, so that the character lands in a pose we need without falling.

Aside from these laws of physics, there are 2 other principles that we follow for our fighting animations. They support the laws of physics and we call them separation and compensation.

Separation is the accumulation of power in one place which is then transferred to another. Using this principle we can create animations of powerful strikes. For example, here we can see how the character accumulates energy, then gets on his feet and puts the entire energy of his jump into a strike with a sword.

This taekwondo fighter is another example. He spins himself very strongly, then his body almost stops with only the leg continuing the rotation. So all of the energy of his rotation goes to the leg.

Compensation means moving one or several character body parts in the direction opposite to the main direction of the movement. This is necessary for retaining balance, smoothing the center of mass movement, or both.

Here is a hit with a flail. When the character strikes, he moves the flail over his head. The flail is heavy, so if the character doesn’t do anything, it will pull him back and he’ll fall.

The realism of animation is usually ruined by small details - a center of mass that doesn’t move right, or a rotational moment that accelerates at the wrong time. When accumulated, these small things become noticeable and ruin the whole picture.

The 12 principles are a great foundation for animators, but they are not enough to create realistic movements. We think these principles can be greatly supplemented by our physics-based tools. This way animators will become free to focus on the artistic ideas, leaving complex issues of physical accuracy to the software.