New3dge students Cynthia Le Friec and Eulalie Brunaud did a breakdown of their last year project Lost Mind focusing on the environment and character production.

Cynthia: Hello, I am Cynthia Le Friec, 26 years old. I live near Paris, in France. Freshly graduated from New3dge, I am currently looking for opportunities as a 3D junior environment artist.

I have been immersed in video games since young thanks to my parents who are also gamers. That is why I am a fan of survival horror! Games like Resident Evil, Evil Zone and World of Warcraft gave me the desire to pursue this career. I have always admired the work done by other artists, and this is what led me to take part in this great adventure.

Eulalie: Hi! My name is Eulalie Brunaud. I am 22 years old and I’m from Normandy, France. I recently graduated from New3dge and am currently a junior character artist looking for opportunities.

Since I was a child, I have always been fascinated by manga/anime and video games such as Pokemon or Halo and I have always liked to draw or invent characters. I love illustration, and 3D was something I became curious about as I went along. Subsequently, 3D became a real passion and a great discovery.

New3dge is a Game Art & VFX school located at Paris and directed by Michael Baratian. There, studies last for five whole years (preparatory year, two general years and two specialty years). The teachers are stakeholders of the game industry, which allows the students to work with real production constraints.

Cynthia: The courses followed during my first three years taught us about the whole process of video game production including many constraints involved in the artistic direction, the choices we had to make, the gameplay and deadlines which must be respected. With full knowledge of all of this, I was able to choose my specialization as an environment and technical artist.

Eulalie: I learned a lot in school. It has been a constant push to improve ourselves and to make our project look good. The fact that we had instructors from the video game industry enabled us to understand very quickly the pipeline of video game production. I also learned to be more open-minded to critique and advice, and I think that is important in this area.

Lost Mind is our last year project. It is an investigation/narrative third-person type of game with a possibility to play in VR. The story takes place in the 19th century. The player embodies Ethan Hunt, who is amnesic after an accident. He comes back home after many months of convalescence at the hospital and discovers the manor empty; nobody welcomes him. He decides to look for some clues to investigate the mysterious disappearance of his family. 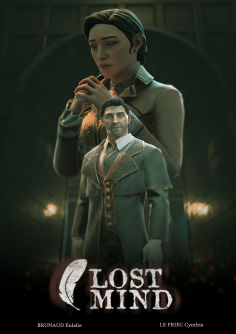 The main goal was to create a scene with some playable characters in UE4. The investigation/narrative gameplay led us to develop the story to get a coherence between the characters, the environment, and the gameplay. The main challenge was to have a playable project without any loss of FPS and a precise idea about the gameplay in an enclosed area.

First of all, we had to determine the base of the story, i.e. the main character and his family, the artistic direction to follow as well as the timeline of the events and the occurrence conditions. Then, we had to define what kind of riddles we were going to increment and identify what would be the technicals constraints linked to the gameplay as well as the allocated time. The most important things to create were the characters, the manor and the gameplay. In the beginning, we were four working on the project but throughout the year we ended up with only two persons which forced us to retake and re-adapt the workflow.

Cynthia: For the environment, we chose some English Victorian manors and houses as references. At first, we established a plan of the manor and set up a modular blocking for the whole place. 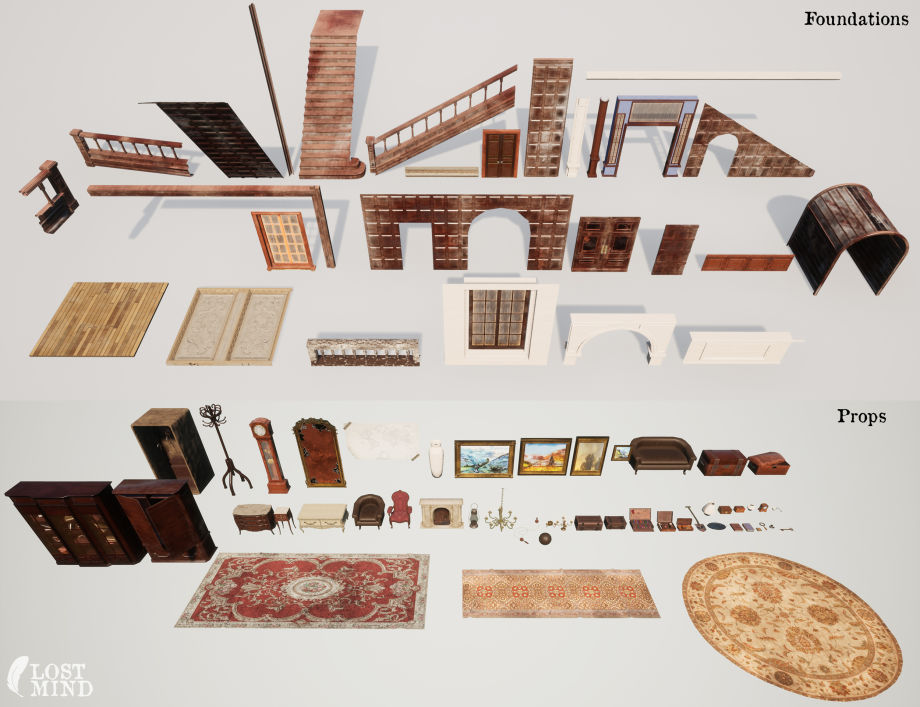 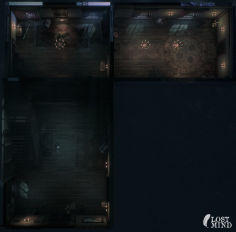 Once the blocking was finished, we used a Shotgun organization to identify the deadlines of each task. We also searched for some references and pictures of both places and items of that century which we stored on Google Drive. We then tested the lighting as soon as the blocking was elaborated so as to get an idea about the desired ambiance.

Afterward, we performed some blueprints testing in regards to the inspection of items as that is the main element of the gameplay.

The environment was made in 3ds Max for the sake of speed and workflow (we needed to create high poly quickly). Many elements have been re-used and transferred from some items to others to keep it modular. Regarding the materials, we created the textures bank entirely in Substance Painter for more speed.

Cynthia: We chose to create an uneasy dark atmosphere. Inside, the manor is illuminated by the moon to strengthen the feeling of being lost.

Ethan has an oil lamp which allows him to illuminate different rooms.

On that matter, we were inspired by Resident Evil and The Conjuring House with their horrific and dark atmospheres while the television series Taboo incited us to use green lighting which gives this supernatural aspect and the impression of being lost in time.

In order to encourage the player to get close to some specific areas or search for some items for further progress in the story, we chose to play with darkness to disclose – or not – many items in the scene.

Eulalie: The research of references was an important part of character production, especially in terms of historical references, as we neither wanted to get lost in the process nor make temporal errors.

We started with Jared Vincent’s mesh base and modified it to find a better silhouette for each character. Clothes were made using Marvelous Designer to obtain credible and logical folds.

Example of cloth composition and creation

Subsequently, in ZBrush, we exaggerated the clothes’ most important folds by styling them so as to give them life. Once the general shape of the character was designed, we switched to the retopology in 3ds Max to integrate it in UE4. Then, we went back to ZBrush to add some micro details such as skin pores or clothing seams.

Finally, we switched to Substance Painter for texture.

We first create the general shape of the face. At the very beginning, it is important not to go into details while it is necessary to look for large volumes so that the proportions remain as consistent as possible. Once this part is finished, we go further with the addition of details.

We always use several layers when we want to add something to the sculpture. Sometimes, we even mix them together or decrease the intensity of some of them. This way, if we don’t like something, we can just rewind.

In terms of texture work, the part that we enjoyed working on the most was the jacket of the female character Zilpha. We first established a basic brown color and then added a warm-up gradient from the bottom so as to attract attention to the character’s face. To enhance the stylized aspect of the clothes, we increased the contrast between the hollows and the humps. We also put a “cutout” effect in the occlusion of the character to give a hand-painted impression. The most interesting part in Substance Painter was being able to create our own brushes; e.g. we added embroidery patterns on the jacket of this character.

Here’re some of the gameplay blueprints initially published on ArtStation (you can check out the breakdown post here). 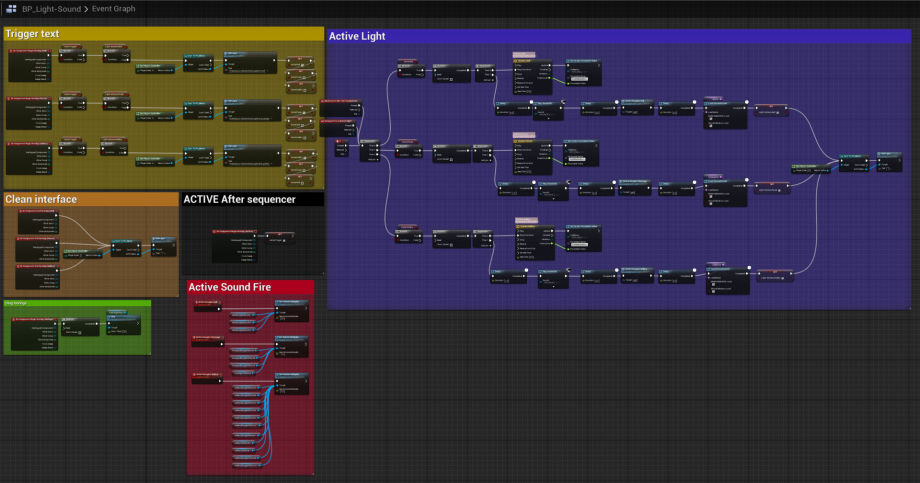 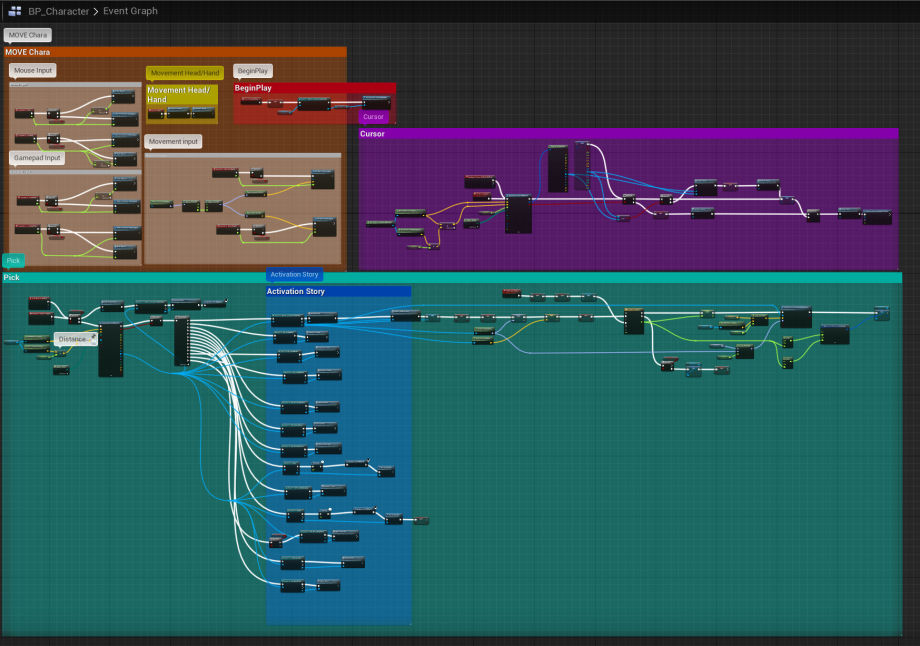