We’ve talked with the developers of Fuzeboy and discussed the challenges of the production of their debut mobile title Fuzeboy, which features some very cool 2d animations.

We’ve talked with the developers of Fuzeboy and discussed the challenges of the production of their debut mobile title Fuzeboy, which features some very cool 2d animations.

Hi there! My name is Denis Samokhvalov, but I prefer to use a nickname “Darftey”, because it’s a real torture for english-speaking people to pronounce my family name. I’m a 22 years old and I live with my girlfriend in a rented flat, making art while trying to survive the tough reality of a post soviet country!

Since I remember myself I dreamed to create entertainment content. I’ve generated all sort of visual garbage since I only get to the wild and beautiful lands of internet. Then I figured out that game development is pure combination of main kinds of crafts — art, writing, music, coding! So, it’s a perfect place for anyone who wants to make all stuff at the same time. Since that very moment I’m hardly “level-upping” myself to learn all magical aspects of pixel art and game design.

Results of my self education

My experience as a developer is simply a “Fuzeboy”. It’s first game which I make not only as artist, but also as developer and idea author. For a long time I’ve only learnt pixel art on my own without development of actual game. It was scary to engage coder to make a game because I thought my skills was… awful. I was scared to see words like: “Are you kidding? Your graphics looks like nasty orgy of drunk pixels”. So, all my development experience was started four months ago — since I get message from italian coder named Niccolo Favari! He saw my Twitter stuff and offer a help with code. We formed a team called “Blocksword” and from that very moment we are creating our own game! My first game ever. I think duo is the best type of indie team.

Start of the project was quite fast. On the same day of my acquaintance with Niccolo we discussed plans about our first game, and that was the day when Fuzeboy born. All we knew at the moment is that we want to make a good game having abilities of two simple dudes with PC’s and bunch of ideas. So, after few minutes we decided to create little, but really good and high quality game for mobile devices.

Quite the same inspiration sources let us become some kind of “motivation starting point” for each other. Both of us really did not want to do another typical mini-game like “move blocks, solve puzzles” which internet is overflowed with. Our goal was creating of good action platformer game for PC and smartphones which we not gonna regret about and which we are really able to make. When I thought about mechanics for such idea I figured out that bombs will fit perfectly to gameplay, bringing a lot of dynamic situations. Somewhere on my PC I found character which I’ve created few months ago – before Nick sent his first letter.

Main inspiration for visuals was gifted to me by “FEZ”, but gameplay ideas was provided by “Bomberman”, “Zelda” and some other classics. So, I’ve refreshed the palette of that character and gave him name that will fit to explosive game idea — Fuzeboy! That’s how he was born… Born to die infinite amount of times from BOMBS in the future!

“Fuzeboy” is puzzle platformer for PC, Android and iOS which currently is on alpha condition. Game is gonna tell story about little boy who was chosen to protect enchant artifact — book of endless fuze! That book contains the formula of ultimate bomb which able to destroy time, space and… all other stuff! Danger stuff I’d say. Bad guy of the game named Dynamitto (and being living dynamite itself) steal that explosively dangerous artifact in very beginning. So, player must bring back the recipe by using of his explosive abilities!

Very beginning of the game

The game is divided into levels which is large dungeon-like rooms filled with secret areas, puzzles and bonus stuff. Sometimes you’ll find treasure maps which always contain unique hints and advices for founding the goodies! And sometimes hints will be quite cryptic…

Each tenth level presents unique boss fight. For completing the level for all 100% you have to search bonus rooms, secret areas and solve some puzzles! We want to add as much secrets and goodies as it even possible to do for platformer game! Also every second level is “Run away” level — you need run away from screen that chasing you from left.

Our main feature — you able blow up any stuff you want! So, we put different types of boxes, chests and enemies that player will meet in his journey. Amount of them is gonna grow with each new level as the amount of other objects able to be exploded.

Also players will be able to purchase permanent powerups in merchant’s room! Difficultness of game will grow with each new level. To make world of game more soft you can make Fuzeboy more stronger and powerful! But that completely unnecessary! But who doesn’t want to use super powerful bombs spreading flames, right?

Process of trading with Junkie

Money of game presented as gears and gems which merchant named Junkie will take with pleasure! You’ll find that shiny stuff in every corner of each level. Why gears are so valuable? Who knows! Maybe Junkie is constructing something in his basement, or maybe he is just insane…

Darftey: Yeap, “Fuzeboy” works on “GameMaker” engine, but answer to that question better to be from Niccolo!x

Nick: Hello I’m Nick (aka Nikles). I’m from Italy and I can’t draw s**t. Luckily I can code and a year ago I decided I wanted to make games. I started to learn GameMaker: Studio and I ended up making platformer prototypes (with squares and circles as graphics, like every good developer does).

Then I met Denis and I fell I love with his concepts and drawings. I totally embraced the Fuzeboy concept (along with other concepts and ideas we’re currently exploring and refining). So… yeah…. I’m 32 years old and after having worked in banking and financial institutions, I now make games. Ain’t life funny?

I chose GameMaker: Studio because that’s what I’ve been focusing on for the past year/year and a half. I like scripting languages and the GameMaker Language along with the event system are very flexible and powerful tools. Yet simple and quick to use. Also having no prior experience with game development, I needed a tool with lots of good learning resources. Unity came up but I wanted to focus on 2D (remember I was born in the 80s and I grew up in the 90s). There’s no better tool for 2D games. 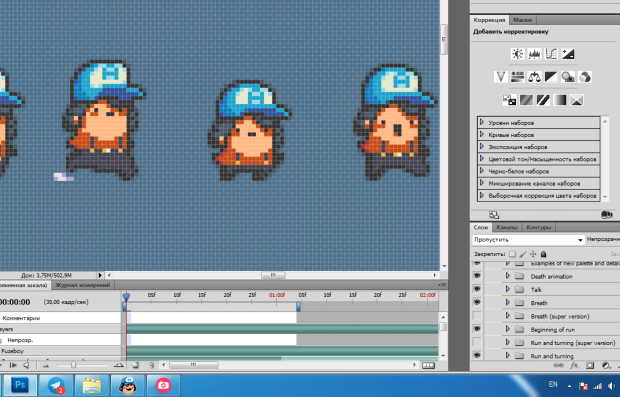 Process of stuff creation and task solving is quite simple — I just torture myself till something good comes out from screen! Also I use Twitter to look at pixel art of other artists. Twitter literally filled with talented artists which inspire me to make stuff faster! But, yeah, I definitely can say that I use only one program to make game visuals.

Answer on that question is TIMING! It’s most important “tool” that animator has. Also I watched 12 episodes of Harry Partridge’s tutorial series named “HuHa”. He tells quite useful information! I’m use only “frame by frame” animation method to create motions for game because I believe that it’s only way to make high quality 2D animation. In process of animation creation I always have three things with me: knowledges about timing, Photoshop timeline and my patience! Timing for motion is like good colours for pixel art — it’s 70% of success! That’s how Fuzeboy’s run cycle looks inside of software.

Each green line is separate frame

Yeah, there was some tiny problems with controls! Even though the fact that “Fuzeboy” has gamepad support we had some troubles with controls because of smartphone version of game. It was not a problem to create main buttons of motion! Basically, I drew classic “gamepad” buttons — two from left and two from right. That’s quite convenient and instinctive!

But we met some problems when get to interaction and “jumping down from the platforms” mechanics! Basically, we not have a free space on screen for such buttons, and that why we decide to make appearing “Action button” for interaction with doors and other objects! That’s how it looks!

To jump off from the platform you just need to swipe screen with your finger!

Our main goals — start to sell game on Steam, Android and iOS. At first we wanted to make ingame ads, but later we decided to add price for game instead of “ad system”. In that way player will be able to enjoy the game without annoying windows with unwanted information.

And, yeah, there is definitely big interest from players for such retro games. But it is also really hard to earn attention because of huge concurention!