Alex Aznar Samperi participated in Marmoset Toolbag 4 Beta Test and shared his opinion on the new features and improvements for texturing, baking, and rendering.

Hi, I’m Alex, and I work as a Junior Character Artist at elite3d.

Since our last interview, I've been working and doing some portfolio pieces until Marmoset Toolbag 4 testing.

How Did You Join Beta Test?

It was a surprise actually, I was on a bus when I received an email asking me to participate. That was around the beginning of June, however, it took some time to actually start testing. 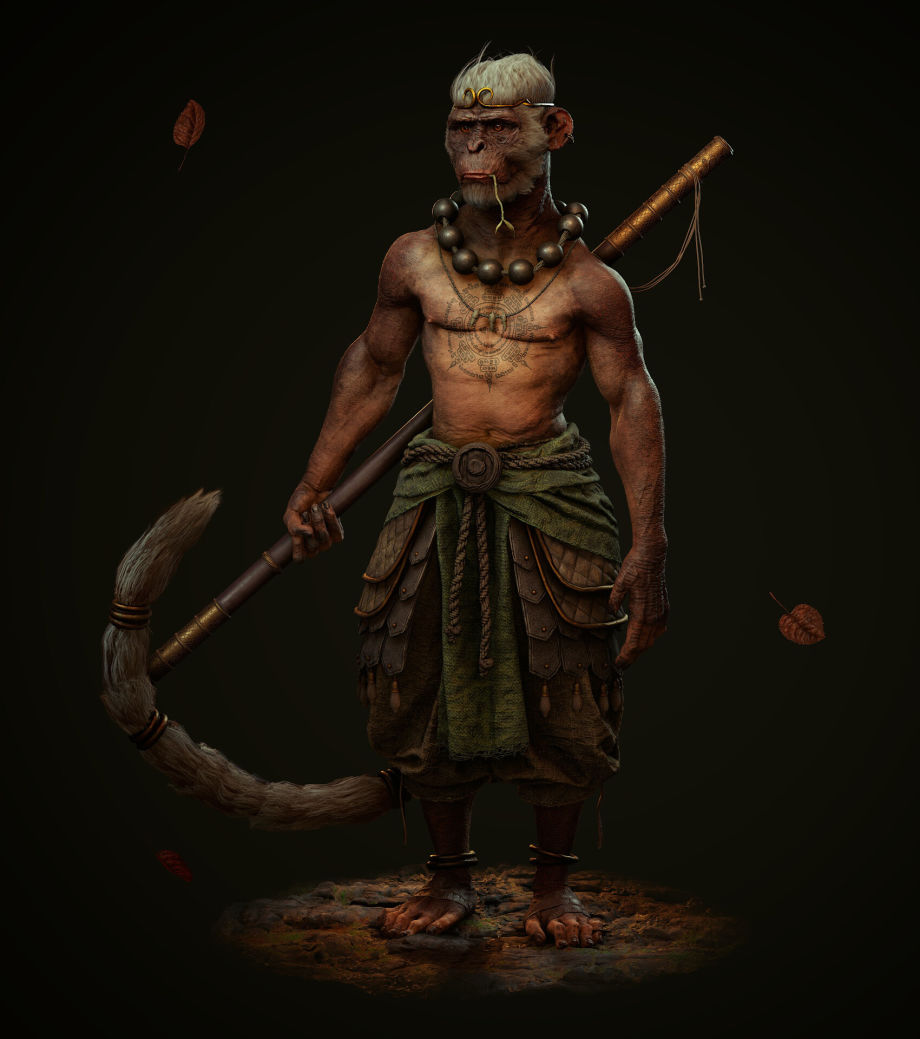 Monkey: About the Project

I randomly started this project after seeing a parody song about Wukong. The main challenge was to create the character itself as I was using no concept and it took me some time to get results I was happy with – and, of course, texture it with Marmoset Toolbag texturing tools, even though, I have to say, they are quite intuitive. 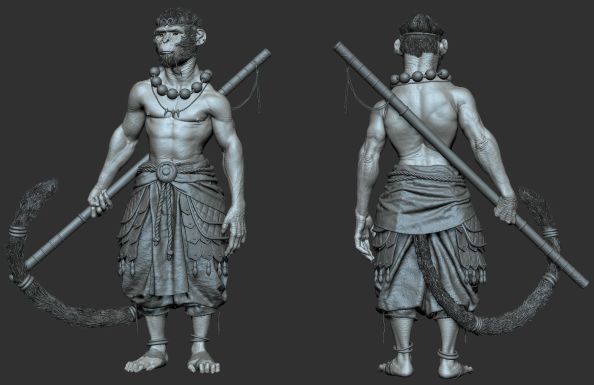 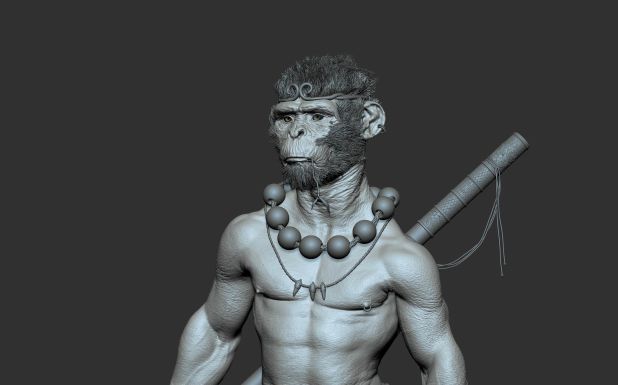 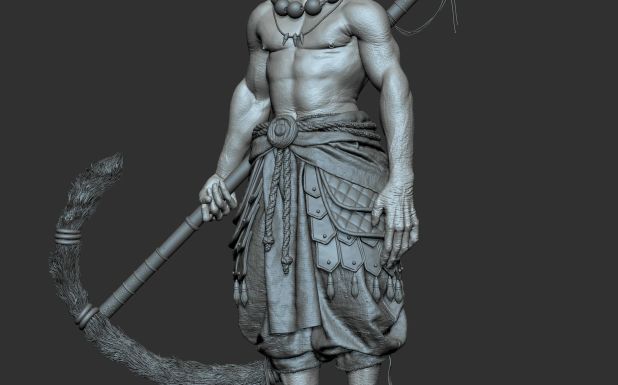 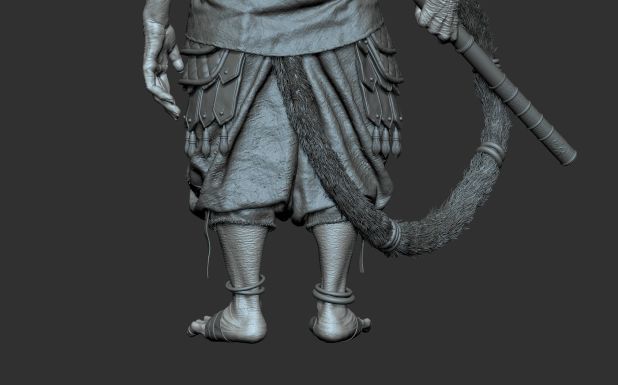 First of all, bakes are still the same overall, but faster. Importing the bakes for texturing is quite similar to Substance. You start by creating a texture project, assign the material you want to be affected, then simply plug the maps into their slots, and start working!

Speaking of the overall process and improvements, I’d say it is faster, not only in terms of baking but workflow as well, mainly because you don’t have to do any back and forth between your texturing suite and Toolbag. Be careful though, if you go too heavy on illumination before starting the textures, you may end up seeing the colors tinted or over-brightened/darkened, so better to start off with a neutral lighting setup and then work your way out to the final lighting.

Another great improvement is that you can have multiple windows at a time, so you can texture or simply move around in one window while having the render changing in real-time in another. And you can also create your own custom UI setup.

I textured the model entirely in Marmoset Toolbag. Since I started baking, I didn’t have to move from Toolbag to other software except for placing the hair (made with Fibermesh and hair cards).

The process is similar to Substance but with some personal touches from Marmoset which I found interesting. One of these things is that since you are working inside Marmoset Toolbag, you have some maps linked directly to your materials that you don’t have in Substance like fuzz and sheen. 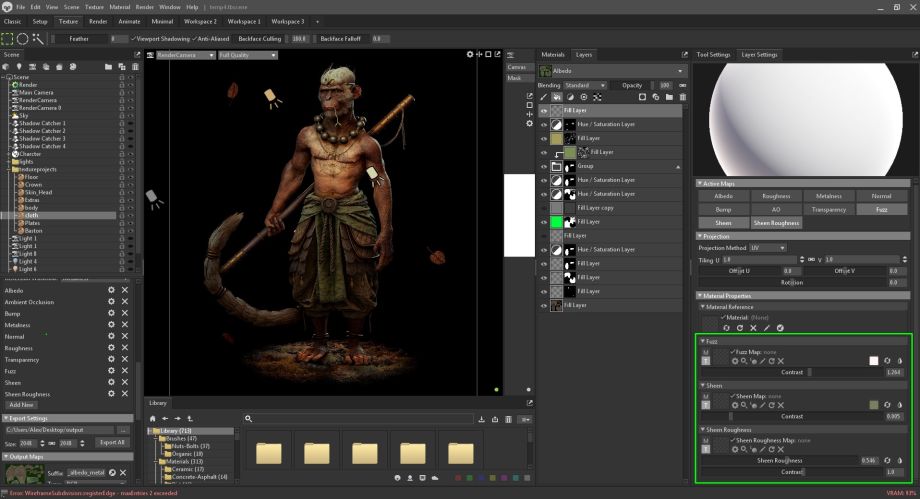 Another thing I liked is how easily you can export a single map, you just hit one button for the desired map or export them all at once.

A quick note on this: you’ll want to export the maps for, let's say, production where the model is going to be moved to Unreal, and in portfolio projects, you may decide to keep them for further interaction. That’s correct, but I’d export them towards the final phase, mainly in order not to have so many texture projects with their layers in the scene, which makes it heavier and slower to run. I did this when I was simply tweaking render parameters and setting up cameras. 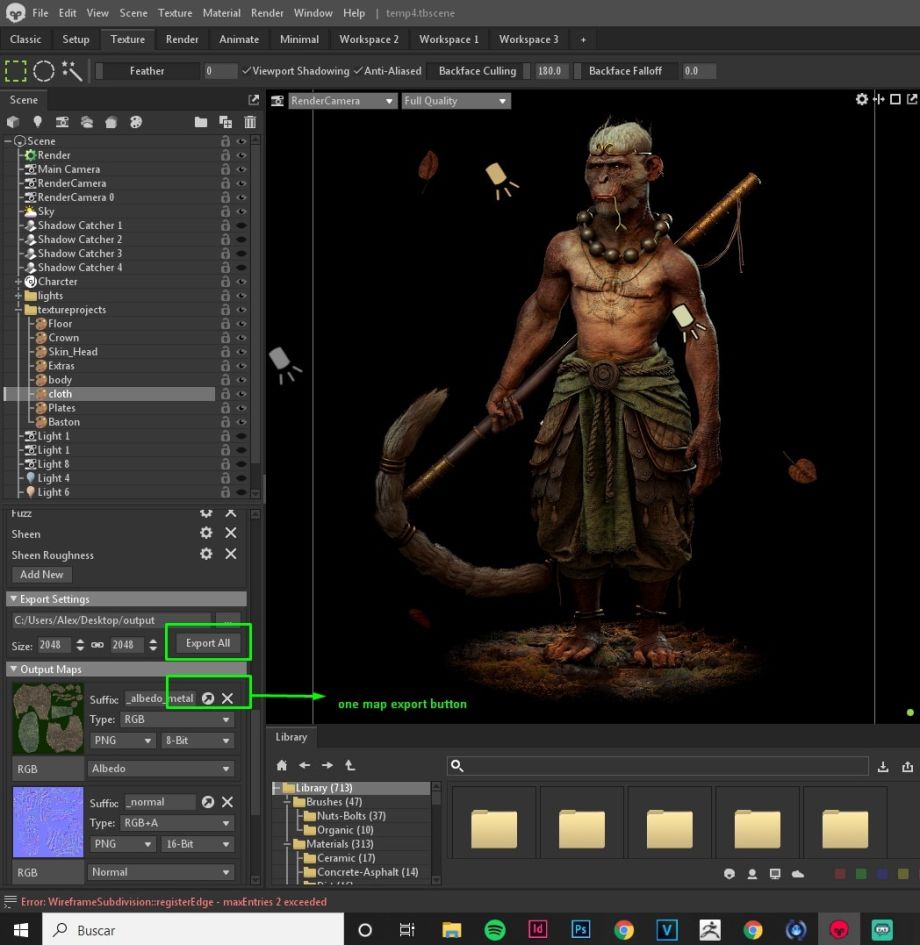 The most important matter is the layers. One thing I love in Marmoset Toolbag is how many branches and sub-branches you can create to build a mask.

I think the screenshot of this mask will explain it: 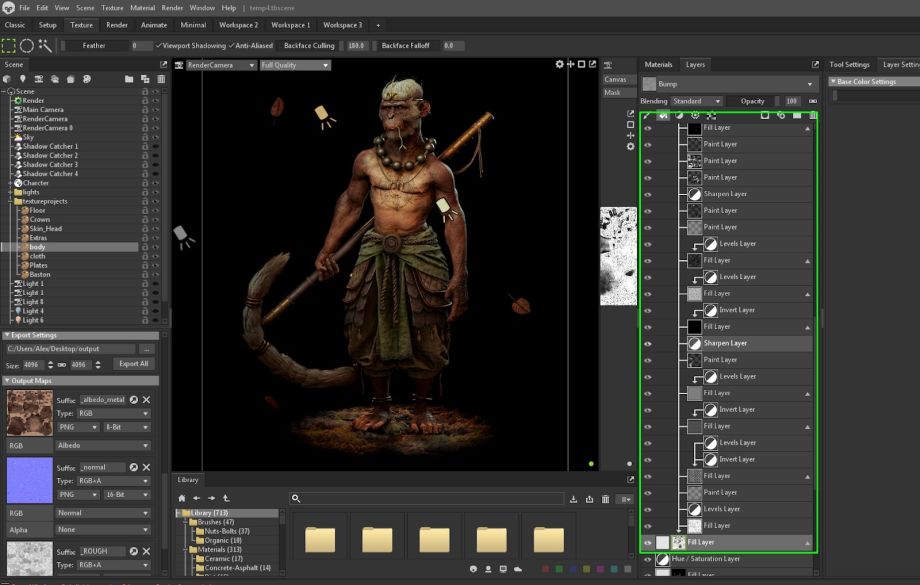 Speaking of the material library, they added a ton more since I did this project, and I didn’t lack any materials at that time, so I don’t there would be any problem with it.

You can also organize your shelf by colors, this gives you the ability to isolate desired colors to find tools faster.

Another note is to be aware of how the brushes work – any brush configurations are saved in the active layer, that way you can go back to it in the future and have those presets saved in there. If you want to work in another layer but keep using that brush you can create a layer while having the layer with the desired setup, and it will clone those parameters.

I separated the body and head into two texture sets, and then 3/4 more for clothes and assets.

To texture the skin, I started by creating blood/bone areas, then created the darker zones, and started playing with roughness as well as adding some details such as scars, wounds, sweat, etc.

For the clothes, I used the curvature and cavity maps to mask out the outer parts of the fabric pattern, that way I could accentuate the worn areas on the outer parts of the fabric fibers. Then, I added some dirt, hairs, some fluff, and damage. And the main touch to add interest was using some bigger pattern to give it a more “traditional” look, as you can see on the hips. 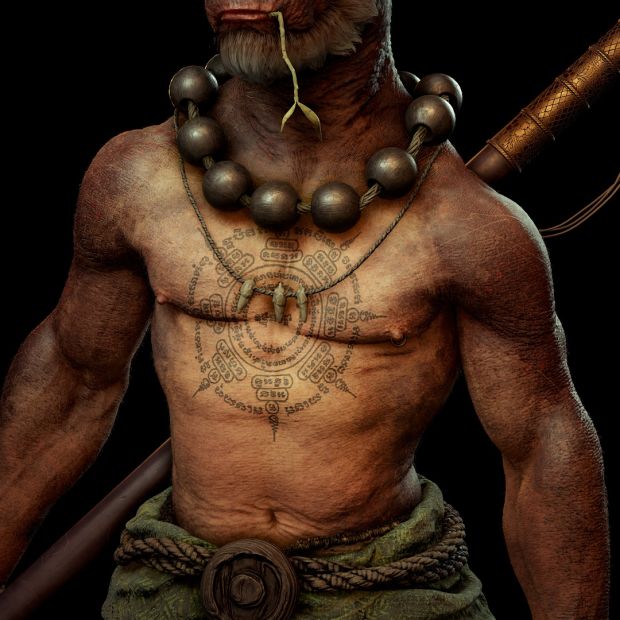 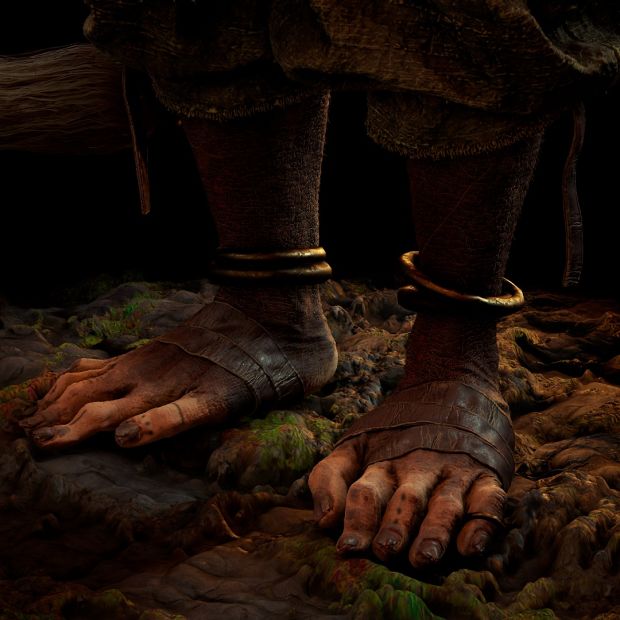 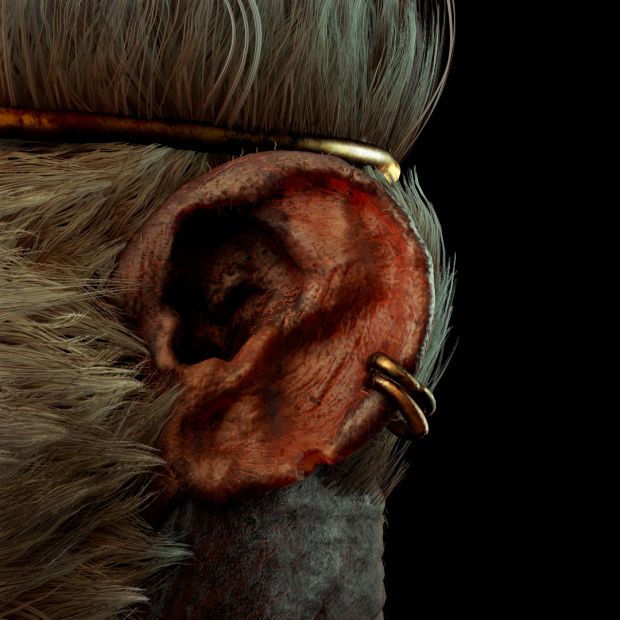 The rendering possibilities in Toolbag 4 is a wide subject, so I’ll try to shorten it.

Ray tracing is definitely a strong tool. I personally feel it is slower to work with, but pays off in the results, so getting used to it will be key, I think.

They also added a cool feature – in Marmoset Toolbag 3, you had the rocket mode to work faster and then the full quality mode, but now you have an extra mode. You’ll be able to work with draft quality which is equal to the rocket mode, use the raster mode which is like the good old renderer but with some new stuff to it, and the new star, raytracing. I appreciate this as it gives you the ability to work with realistic accuracy using ray tracing or in a more stylized way using the raster mode.

Besides this, I think they have to develop the raster mode a bit more, as it feels a bit handicapped. I’ll explain this:

Even though I like the implemented stuff such as the new AO and the ability to tint it, as well as having render passes, for easier post-processing, I do really miss the distance and attenuation curve parameters on the lights. I understand they took them off for realistic lighting in raytracing mode, but I feel it is a bad move for the raster mode.

The raytracing mode gives a closer approach to cinematic/film rendering while keeping it faster than other renderers as it is semi-realtime, meaning you won’t have to wait as much and can see/tweak in real-time.  But while you move it is quite noisy, so for a clean image, you’ll have to wait.

Also, be aware of the discrepancies in lighting and reflections. If you are going to render with raytracing don't trust the raster mode only while lighting as the result will change when activating ray tracing. So it's better to turn raytracing on and off while lighting.

The material layout is a bit different, here are some of the changes:

The lighting setup started as classical 3-point lighting, and then I added some cold and warm rim lights to give the character more interest and contrast. It took me some time to get used to the new lights as they have lost a few parameters I used to play with a lot.

I didn’t do post-production on this piece, I actually did it all inside Toolbag as I feel it is quite powerful in that sense. Here you can see the settings and a comparison of the normal camera and post-processed camera: 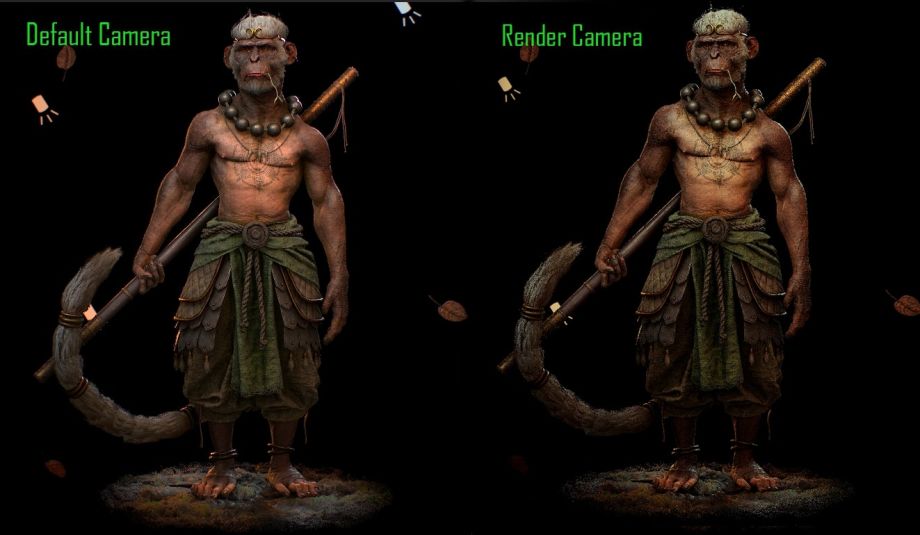 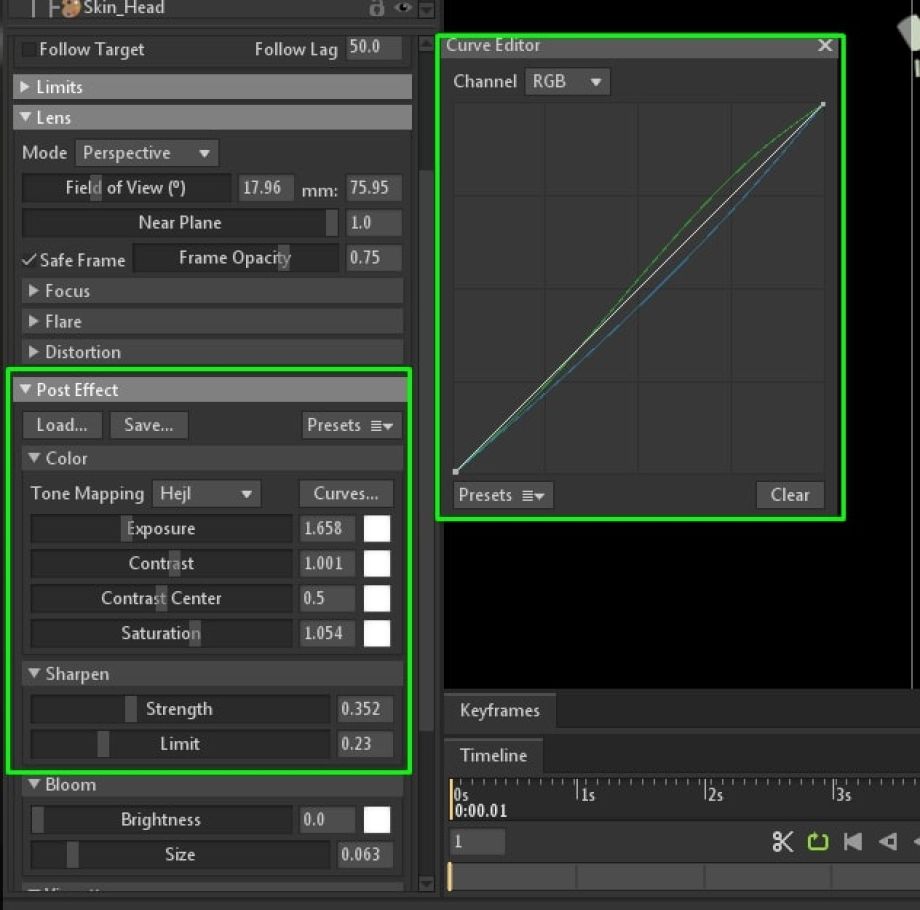 It is a huge update. I like how they gave you both raster and raytracing modes instead of cutting it just to raytracing, even though I miss more flexibility in the raster one.

I think it is too soon to say if Toolbag 4 can replace Substance Painter or not. On the one hand, it means fewer licenses to pay for and fewer software solutions for artists to learn. On the other hand, it means that artists and studios will have to migrate to new software and introduce it into the workflow, which I don’t see happening quickly.

On my side, I can say I’m going to texture my next pieces in Toolbag and see how Marmoset will implement users' feedback in their software.

I’d for sure recommend you giving it a try if you haven't yet.

Read our previous interview with Alex