Rohit Singh talked about finding himself in character art and creating his awesome Orc with ZBrush, Maya, Arnold, and Mudbox.

Rohit Singh talked about finding himself in character art and creating his awesome Orc with ZBrush, Maya, Arnold, and Mudbox. 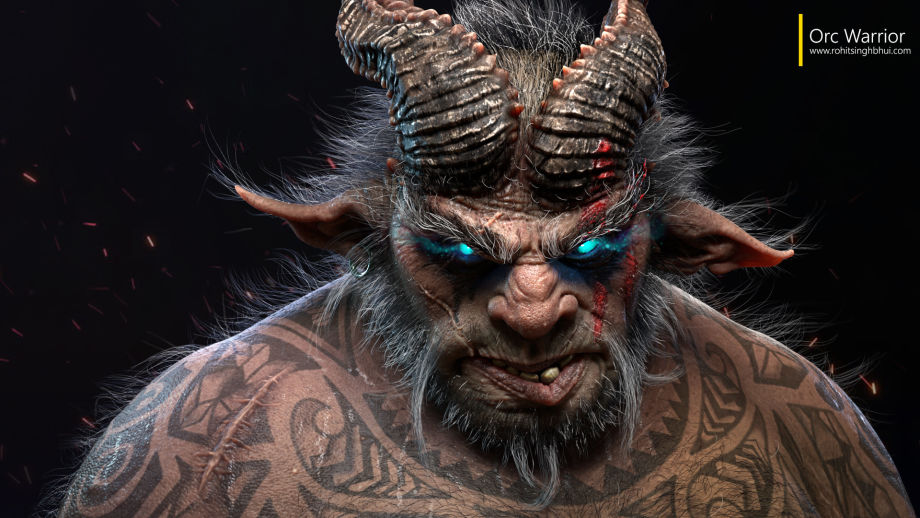 Hello there! I am Rohit Singh from Mumbai, India. I have spent most of my time living and working in Mumbai. I started my career in 2006 doing architectural walkthroughs, logo animations plus I also worked as a video editor for an advertising company. While working as an editor I began learning how to model and got my first job as a 3D modeler.

After that, I worked on the TV Series, Commercials, and Animated Movies, and I’ve never thought that I would work as a Character Artist for games in the future.

I was really inspired after seeing the development of Uncharted Character Art by Frank Tzeng and Colin Thomas and decided to work on my portfolio and learn more about character art by studying anatomy and improving my skills in texturing. My career in the game development industry started in 2015 after joining Rockstar Games in India. I worked for a year and a half with some amazing people and then I decided to move to the Czech Republic.

Now I work as a Character Artist at Madfinger Games on ShadowGun Legends. 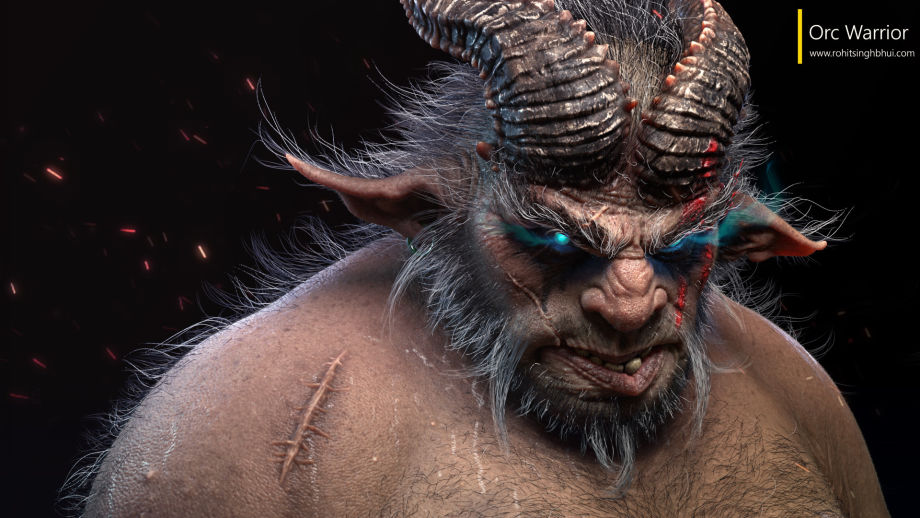 In 2016, a fellow character artist and I at Rockstar decided that we all should take up a concept of our own choice and build up the artwork by showing updates every week and give feedback to each other. It was a fun way to develop the character from the concept art. We learned many things while working on it and explored many possibilities.

I chose the sketch by Karl Kopinski and developed this character to use in my personal portfolio but I stopped working after finishing the sculpt with a little texturing due to some other commission work. 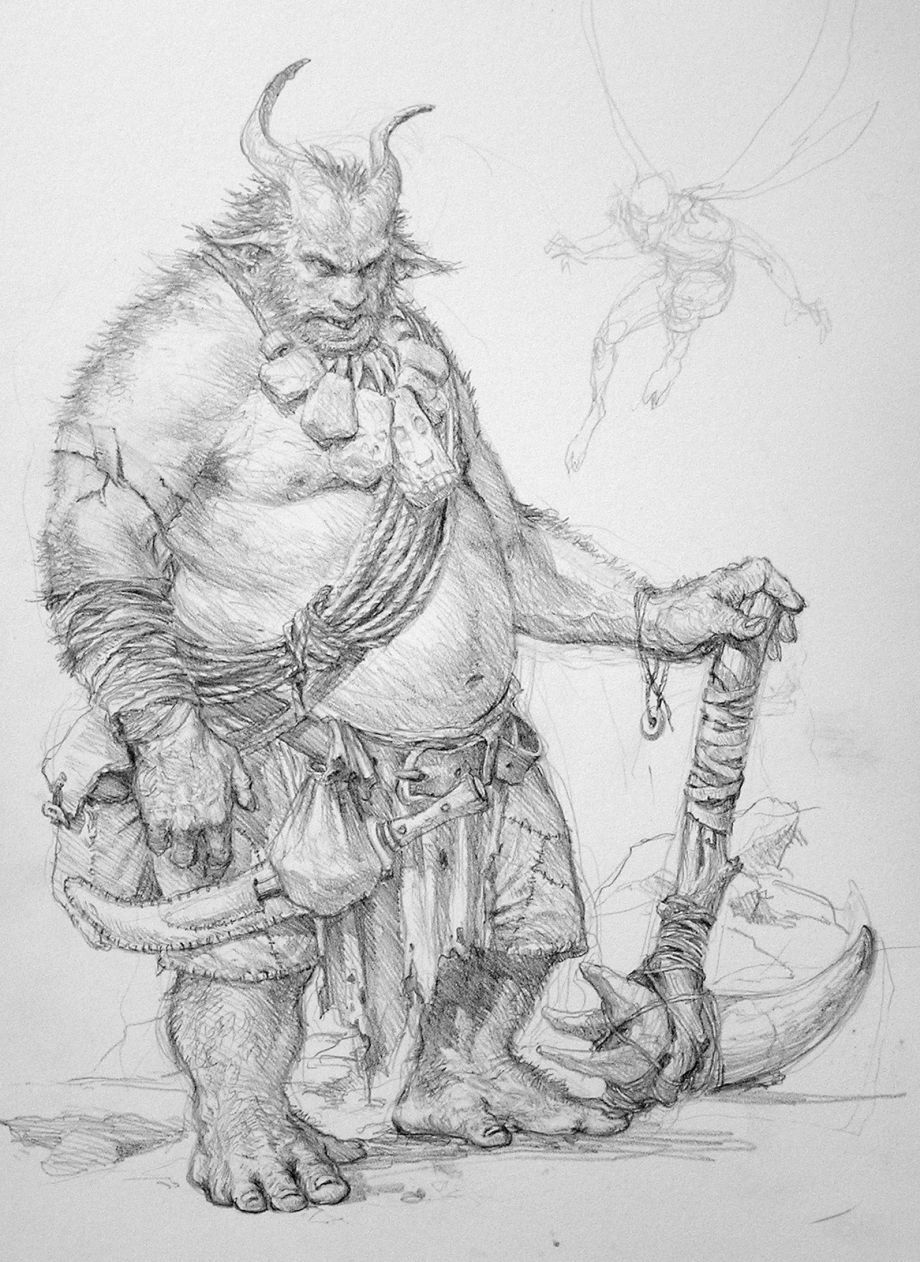 I gathered a few references online and then started the block ut and finished the sculpt in ZBrush. 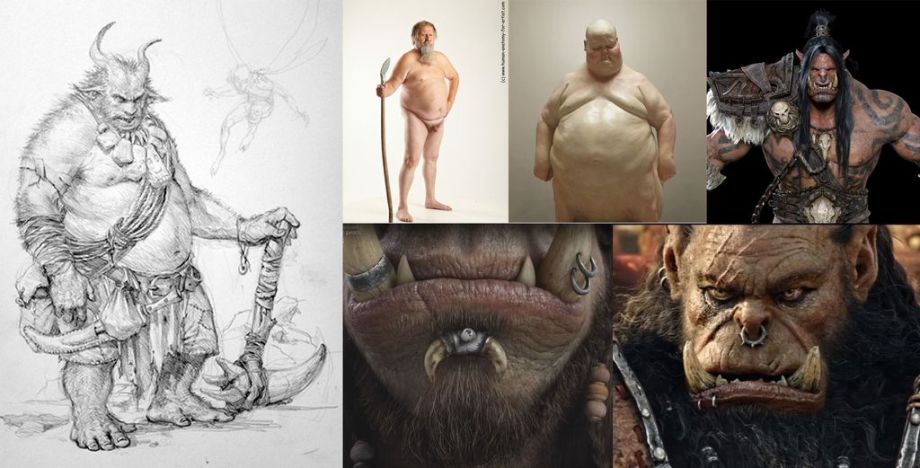 You can find more images here.

After finishing the sculpt, I used ZRemesher to do the topology. Since this was my personal project, I did not spend much time on the retopology and I would not recommend this way of working. It caused me a few issues with the eyeball and eyelashes placement when working on the fur and splitting the UVs for multi UDIMs especially. I found there are better ways to use ZRemesher now. 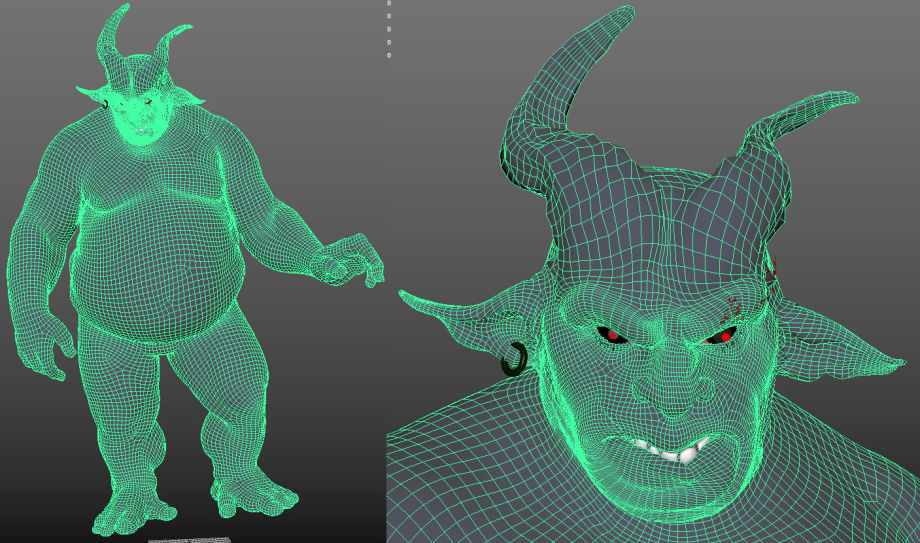 After remeshing, I used UV Master to unwrap the model and took it to Maya to separate the different parts of my model to multiple UDIMs in order to get higher detail when rendering.

Here is my last update on texturing and shading using V-Ray in 2016:

Earlier this year I posted my personal project of Mola Ram – Temple of Doom using Arnold this time which I found really simple to use and decided to continue using for my other projects as well.

Then I started to re-work my Orc Sculpt but the details and textures on him were not good enough to hold close up shots. So this time I used XYZ maps to update the details. It was really simple to use, just drag and drop onto your model.

I did not have time to prepare the breakdowns on XYZ maps and texturing the character, but there are some amazing artist who has made some really informative articles on texturing.xyz website and I used the same techniques on my model.

Perhaps in the future, I will prepare a complete video tutorial.

Here is the update on XYZ texture details:

The textures are hand painted inside Autodesk Mudbox with a simple paintbrush and with random stamps. My main reference was taken from the Warcraft movie, especially the Blackhand Character. 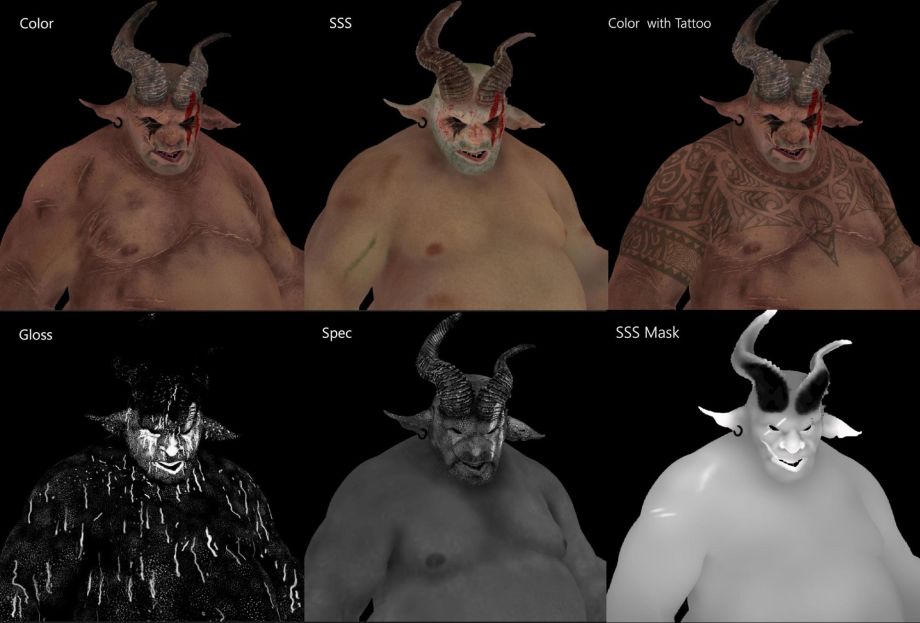 Before XGen I was using Shave and Haircut for all my personal work. Then I found XGen, and it turned out really powerful and easy to use, stack-based modifiers are really awesome to make changes on the fly. 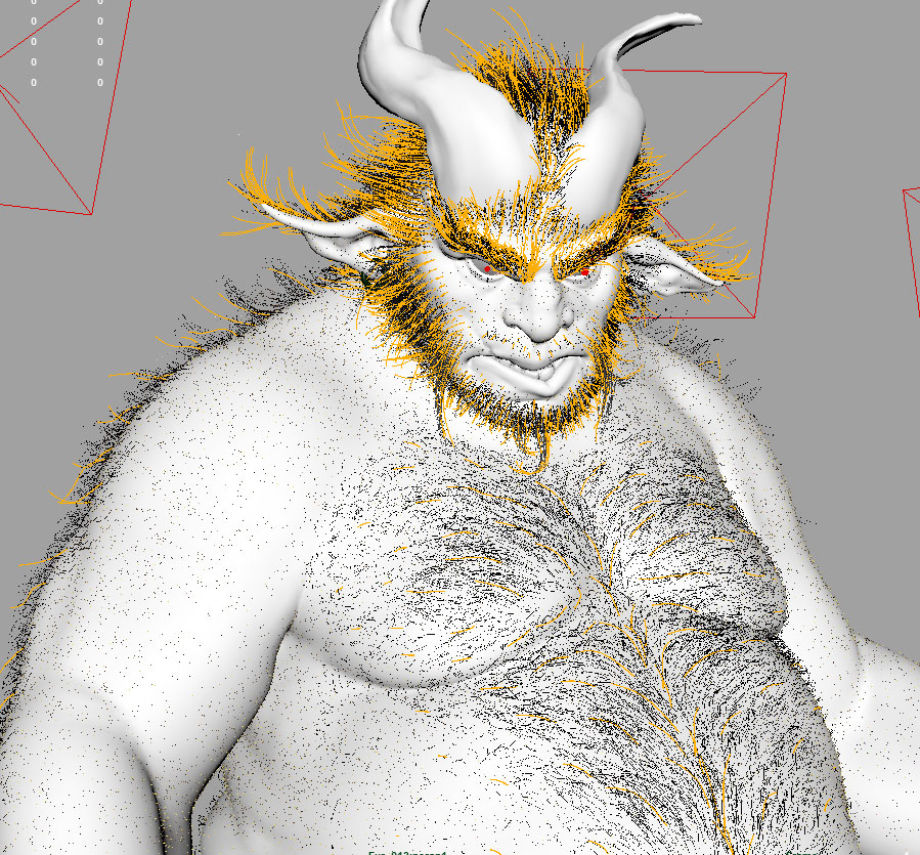 I used one key light from the top to make him look a little furious and added a few rim lights to separate the model from the background.

The Body Rim light was added to show the forms of the model and separate the torso from the arms. 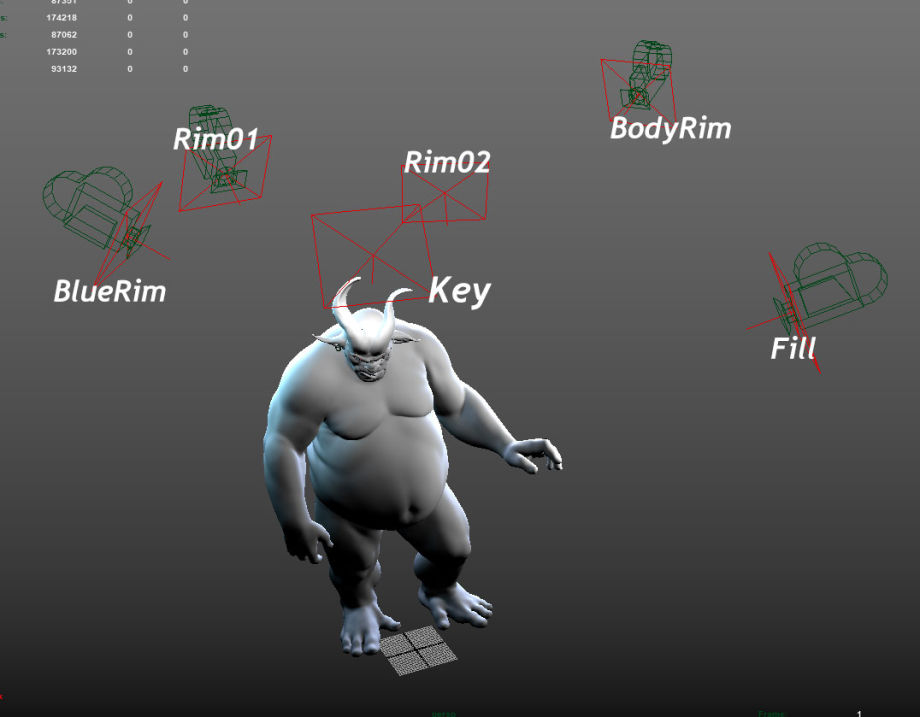 I added two lights to the eye Glow, which is a Sphere and used them as a mesh light.

For the Eye Glow, I used emissive maps and then connected to an aiColorCorrect node to change the color of the emissiveness. 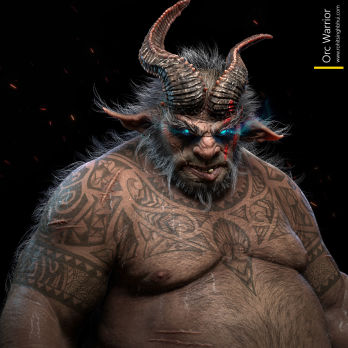 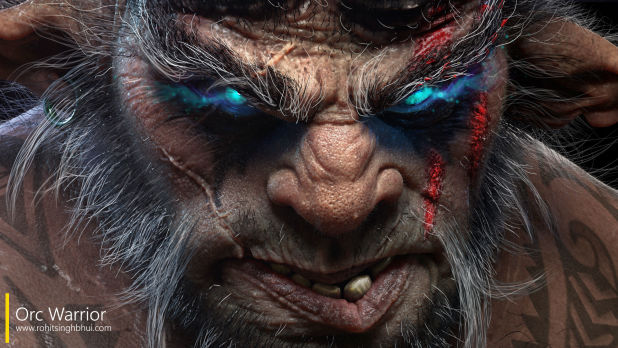 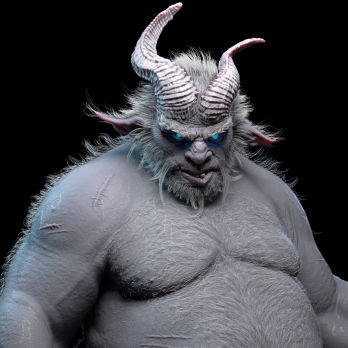 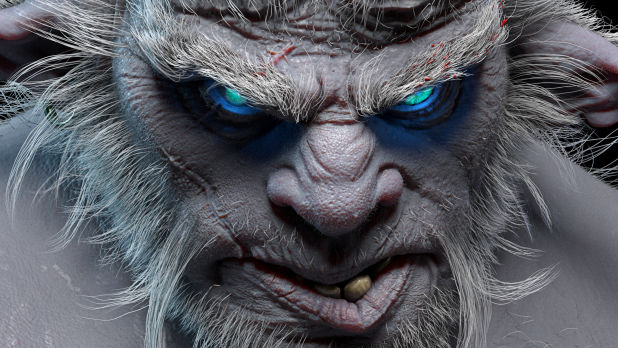 I have made a simple breakdown on Skin Shading with Arnold, you can find more information in the video below. I have shown a little post-effect process and how I paint over on my renders to create new ideas.

This was a fun project. My aim was to learn new tools and get a good grip on shading and texturing. I like using Maya with XGen and Arnold, now I no longer need any external renderer or any hair and fur plugin.

I hope you enjoyed this breakdown!