Started back in 2018, we are a studio operating in Tokyo, Japan. Our team is made up of multinational artists who specialize in creating high-end real-time environments/assets in game engines such as Unreal Engine 4 and Unity. There're currently 5 people on the team with extensive backgrounds in creating environments, characters, and technical VFX.

I'm originally from Guaymas, Mexico, and I have been working in the CG industry in Japan for about 5 years.

Everything started back in November 2018 when I was still working as a full-time character artist for famous titles and games such as Final Fantasy XV and Kingsglaive, House of the Dead: Scarlet Dawn, etc.

During an annual CG meetup event that was held here in Tokyo, I met Koichi Kishimoto, my current business partner & CEO of CafeGroup/Aww. Inc who are known for their virtual Instagrammer named Imma.

We discussed creating a new company that would have a unique concept and be based on my previous experience working in real-time with Unreal Engine 4. During the creation of HOD, I also started to see a very bright future for Real-Time.

So we decided to create a company with multinational artists in Japan as our main branding.

Not to be mistaken for the medieval Japanese master of espionage, Nin-Ja Company has a very unique and different meaning. Nin 人 is a person in Japanese and Ja is Japan, we also added a hyphen - to separate the two words. Nin (Person) - (Coming or Working in) Ja (Japan).

Plus, everyone in the world knows about how cool Ninjas are so it was an easy name to remember and associate with.

Hi everyone! I am a Game Level Designer based in Japan currently working at Nin-Ja Company, originally from Argentina. I'm originally from Argentine and I graduated from Image Campus as a Game Developer. Since that time, I've worked in the industry for more than 10 years and came to Japan to change my career, get new challenges, and gain more experience. Besides that, I am also working on retro games for Sega Megadrive.

Before starting the project, we brainstormed the ideas we would like to create based on the games we liked. I'm a great fan of the Diablo/Dark Souls series and other games from Blizzard and FromSoftware such as Demon's Souls and Bloodborne. I also love survival horrors with their dark and scary environments. At Nin-Ja Company, we decided to merge these worlds to create a unique cinematic in which you could see references from those games. 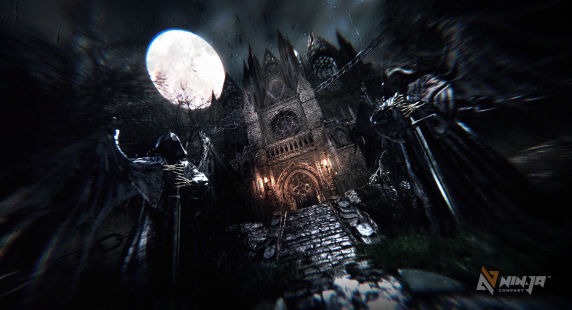 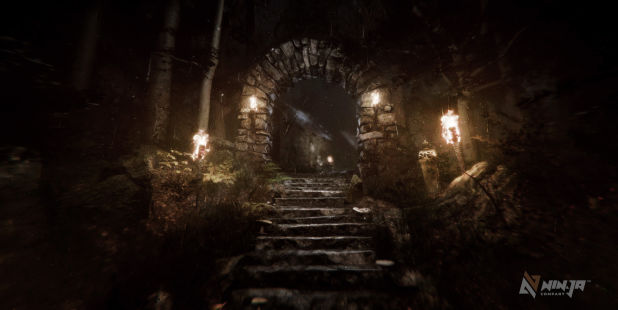 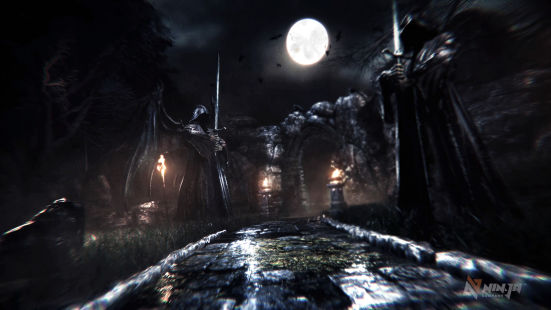 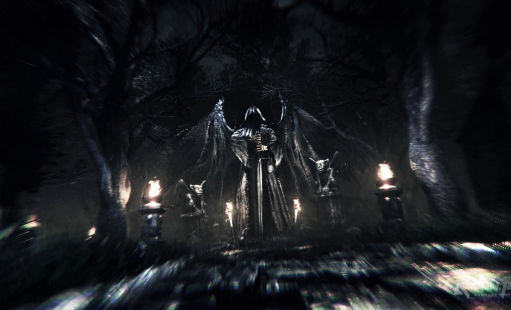 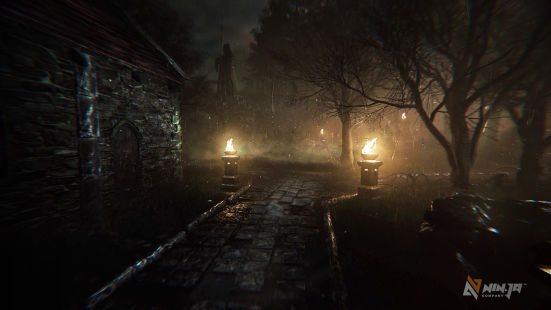 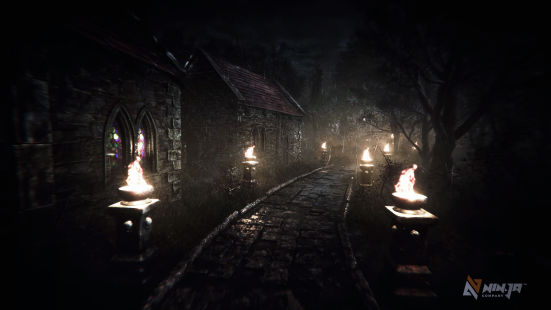 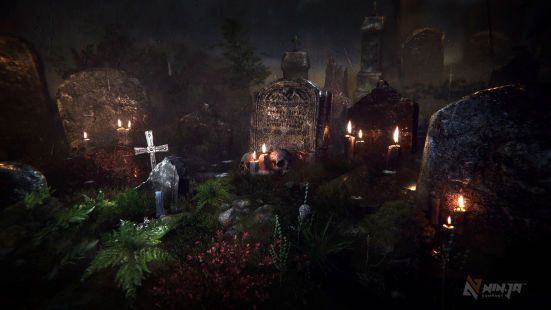 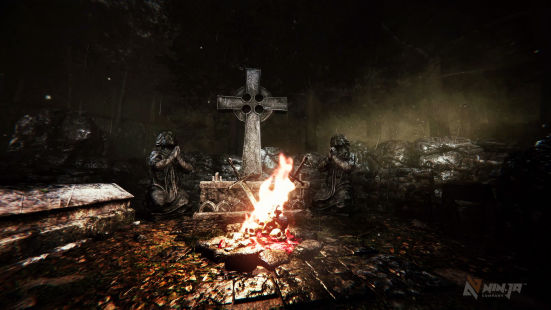 After the brainstorm, the next step was to look for various references/models to create a level in which we could find elements related to those games. The concept was evolving as we moved along with the environment. The first thing we did was to find as many references as possible for the mood board.

During the first week, we found some references and concept art from our favorite games and also graveyards from Google Images, Pinterest, and Youtube.

After analyzing the references we thought we wanted to create something in the same style but different.

Here are just a few examples of the mood references: 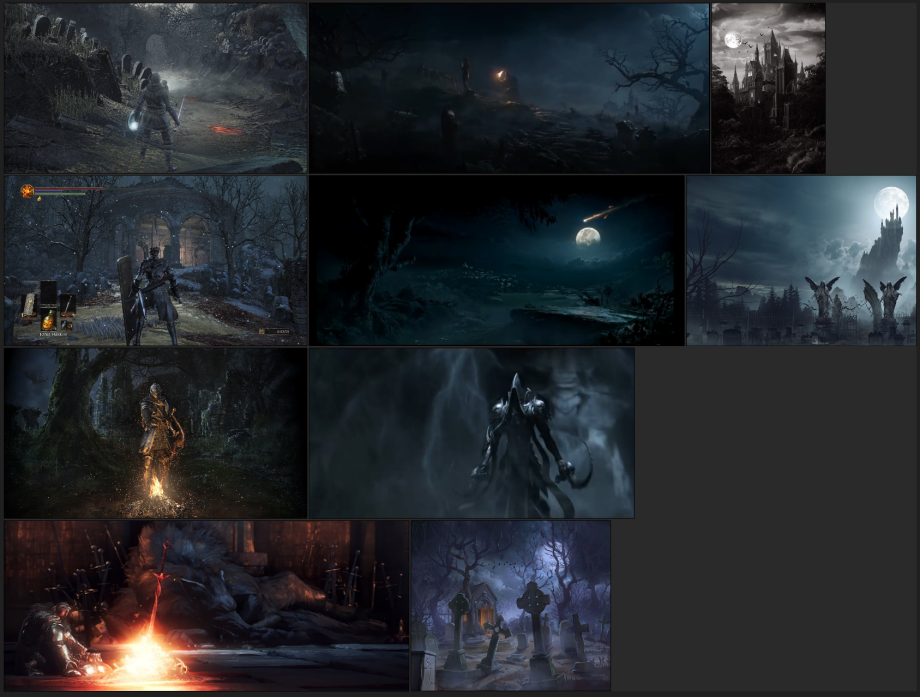 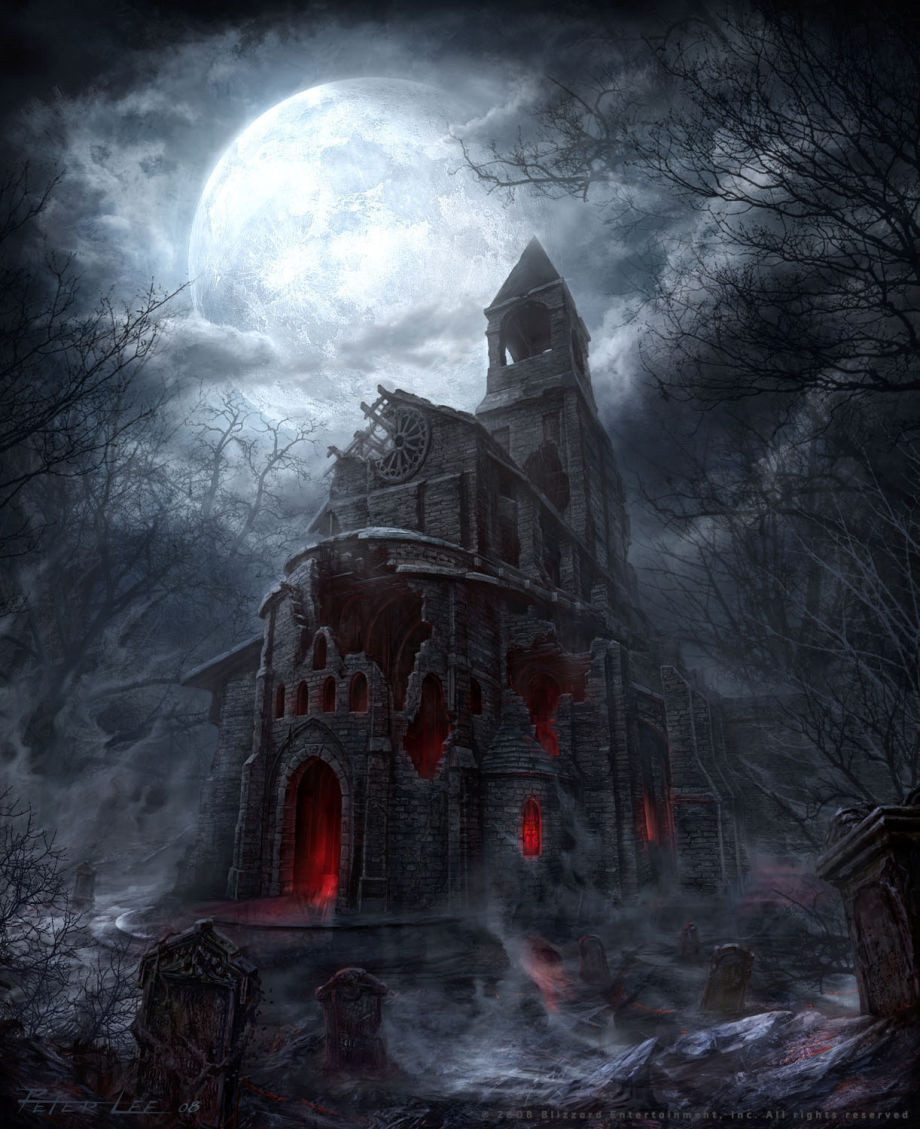 The idea was to create a simple scene that contained such things as a graveyard, a church, houses, and a dead forest as well statues of dark angels and some other religious elements to make the chosen worlds coexist.

We also found out that there were not so many cinematics set during a stormy night, so we wanted to approach this challenge and try to make something new and unique.

Speaking of the game scenes we used as references, in the Diablo franchise, we were inspired by Tristram, which is a small town that has never recovered from the damage dealt by the demons. Also, the New Tristram main area has some of the feelings we wanted to add to our cinematic. As for the graveyard, it was more based on Dark Souls.

The Diablo series has many angels, both good and evil. We took those elements and added a touch of Dark Souls to them, such as colors and contrast. Dark Souls was more about the overall film look we tried to give to the shots and bring the feeling of this franchise.

After finding some of the references we started the look for extra props/environments that could fit into our cinematic.

For the initial part and the surroundings we wanted to have a very dense forest and we looked for something with good quality. We used Forest Environment from NatureManufacture since it fulfilled our expectations and it allowed us to establish the starting point very quickly. 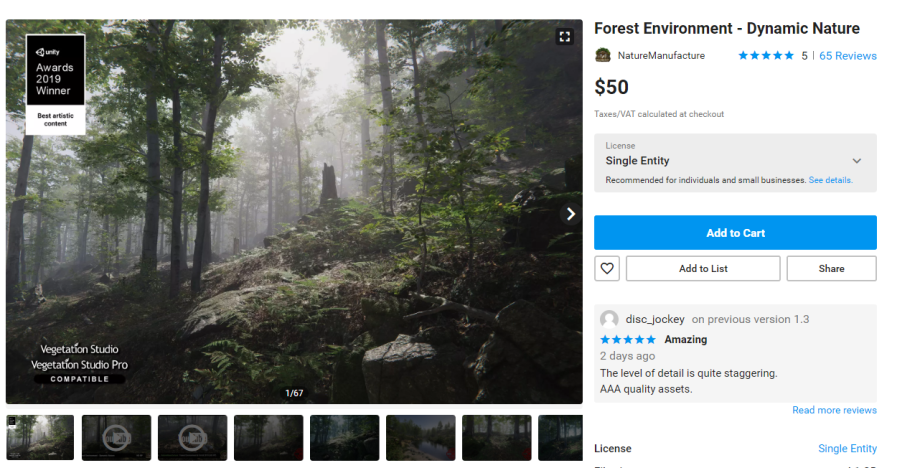 After testing and seeing the quality that NatureManufcature provided, we added some of the assets from PBR Graveyard and Nature Set 2.0. 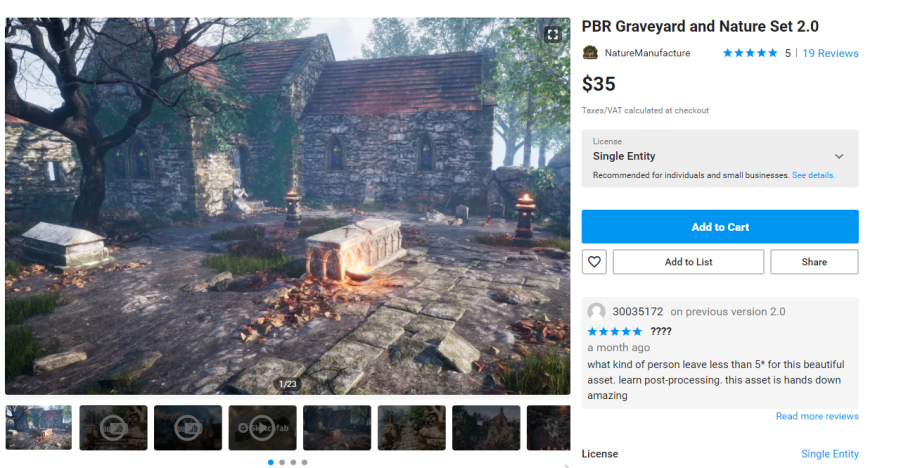 We used these assets from the beginning so the blocking and level design were finished very quickly. Then, we just focused on the level design, lighting, camera, post-process, and extra modeling that was required.

When working on assets, our workflow is usually very similar to those already out there:

The church was one of the biggest pieces in the project and it was modular. All of the props are modular too, except for the dark angels and the cathedral that was used at the end. 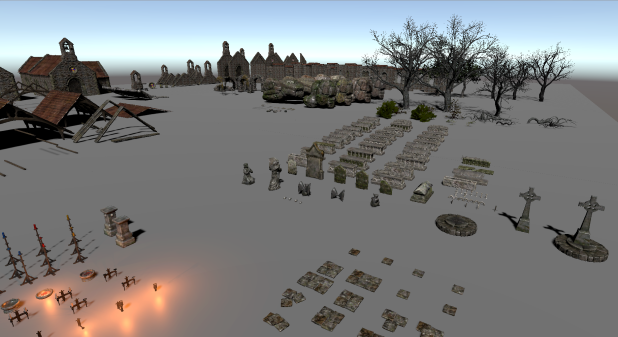 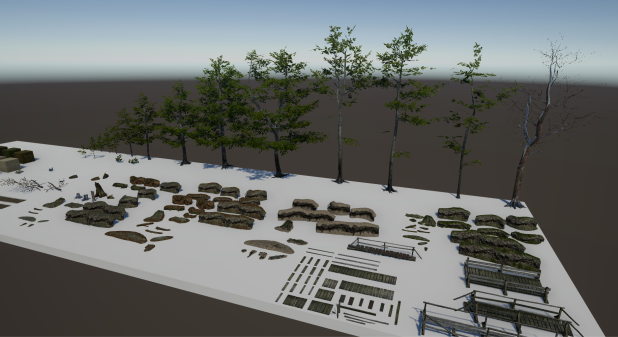 When working on the dark angel, the First thing we did was take a human body into Marvelous Designer. We created the clothes keeping the shape as we wanted more volume on the figure. Then, we replaced the human with Rafael Grasetti's anatomy skeleton and adjusted the pose in ZBrush. We then added a sword and brought everything into Substance Painter to add textures. Using Jonas Ronnegard's materials, we added a gold base and adjusted the HSV to get darker value. Adding an HDR map to our baked lighting gave us a little more value on top. 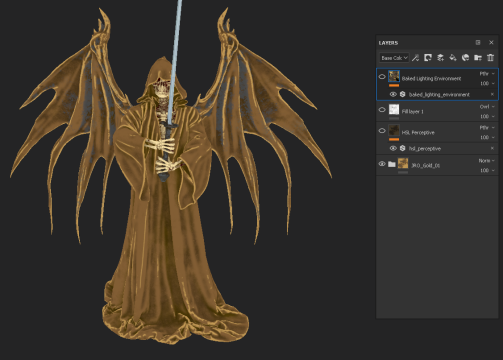 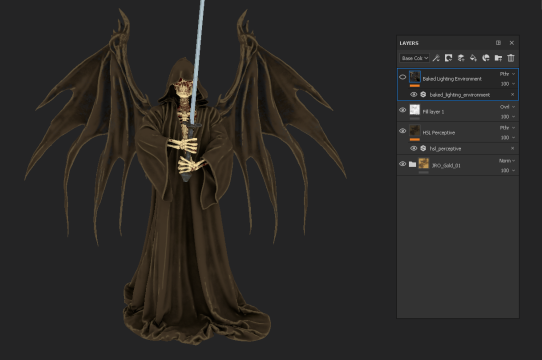 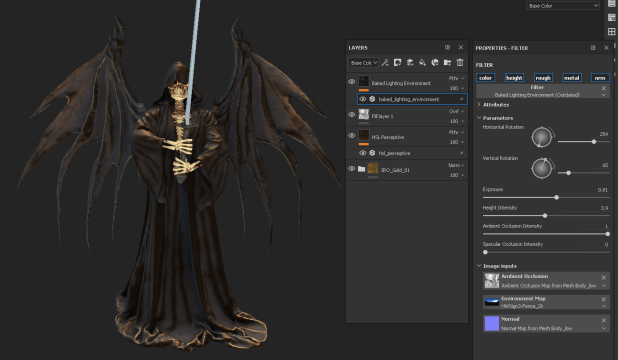 As a side note, Substance Painters allowed us to make easy texture adjustments in general; we just drag and dropped materials and then adjusted them further to get a good look in a matter of minutes. It was a great and easy method, and we always keep it in our toolset.

Initially, we started the project using the Built-in Render Pipeline but we wanted to increase the quality of the project a little more and decided to go with HDRP to add more realism and create a higher quality lighting.

Here is a gif example of the changes we made with the use of HDRP:

Unity also has a very interesting article about the HDRP settings which provides valuable information (you can find it here).

We divided the whole project into 8 sections, each section has its own lighting based on what we see in the shot.

For some scenes, we turned off the directional light and played only with the values ​​of the other lights.

The first section had:

Here is a small sample of the camera shot and the perspective view: 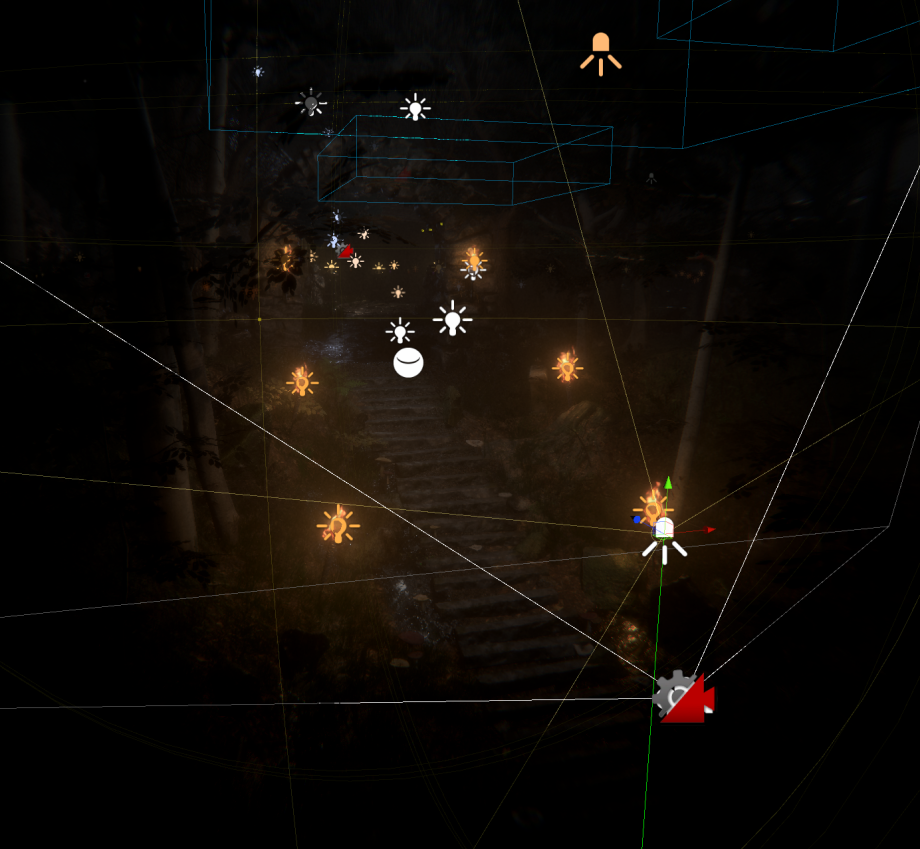 For the moon, we used a simple sphere from Unity, created a material for it, and placed some of the textures provided by NASA's Scientific Visualization for free (link). 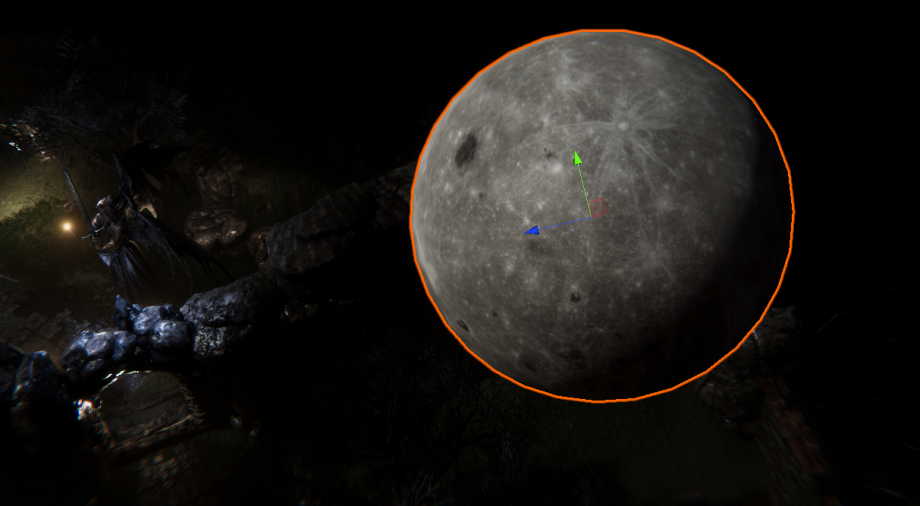 In the settings of the moon shader, we also added some emission with an intensity of 15,000 to give the feeling of a full-moon night. 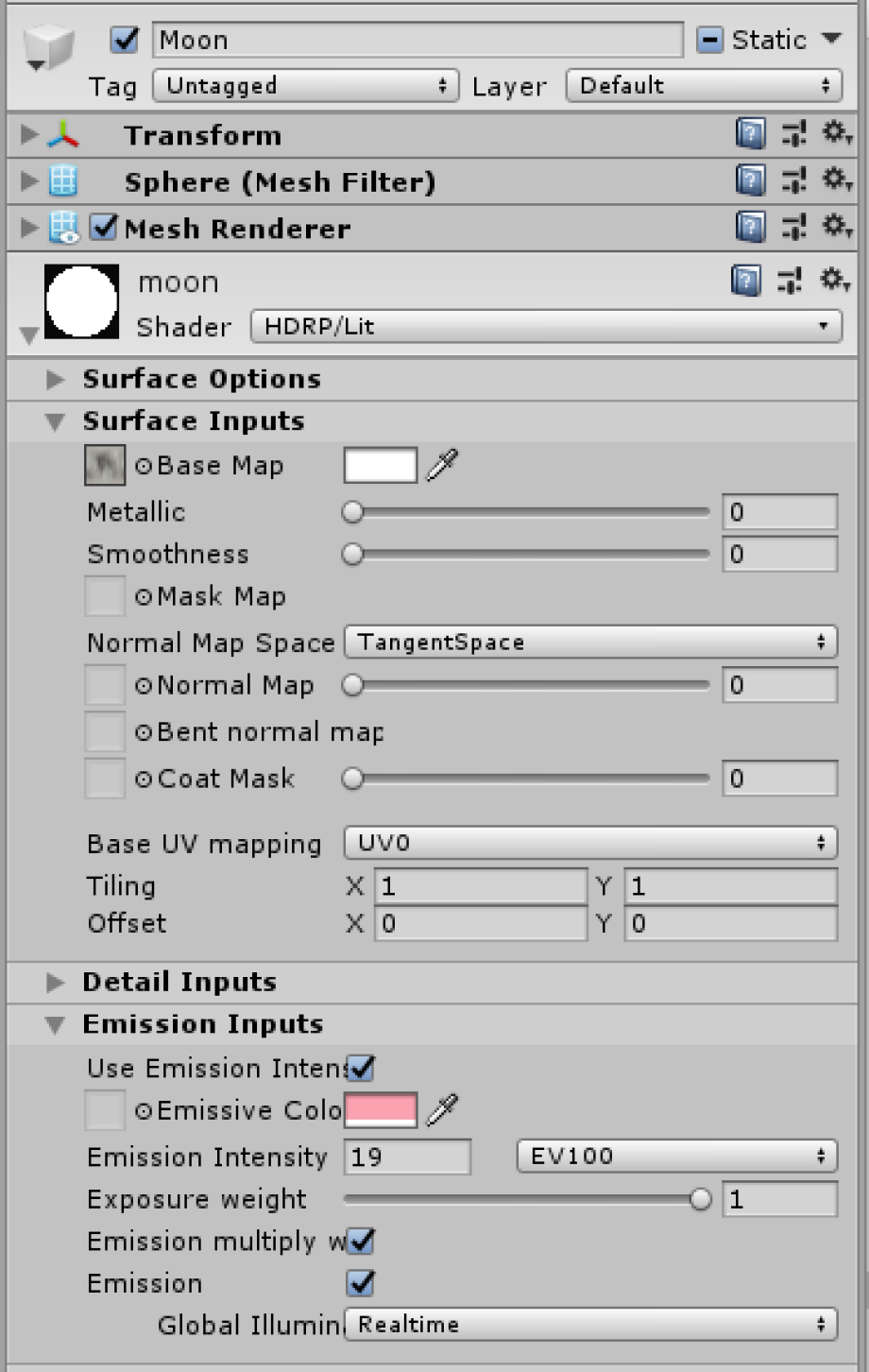 We also used a Directional Light to fake the light coming from the moon.

Here are the settings:

We also used lightning strikes to create the feeling of a stormy environment, and that was another very fun part of the project. Each section of the cinematic has from 3 to 5 rays of different intensities. These rays are made with a Point Light placed on the top of the back of the camera and the animated intensity of the emission. 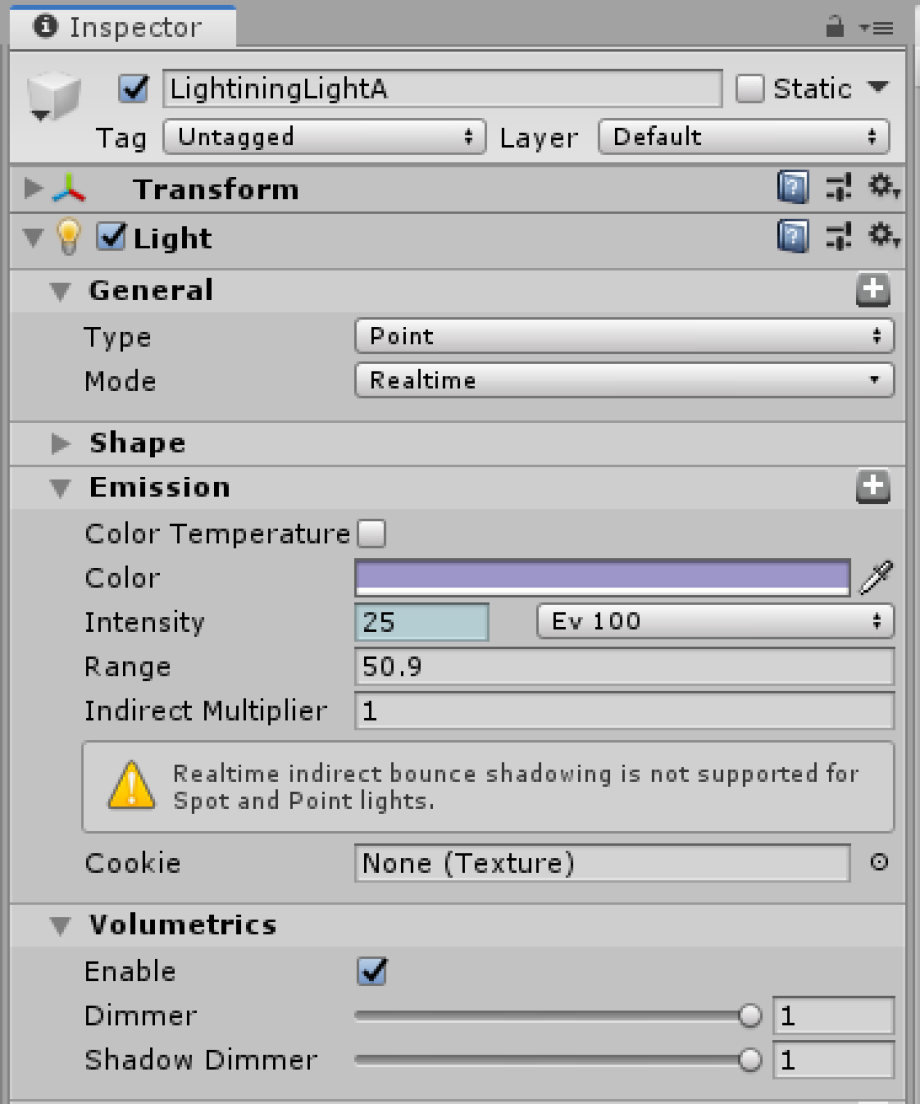 The intensity of all the lights in the project was approximately between the values 17-26.

We also used the color temperature for the moonlight to make it colder and the torches warmer. 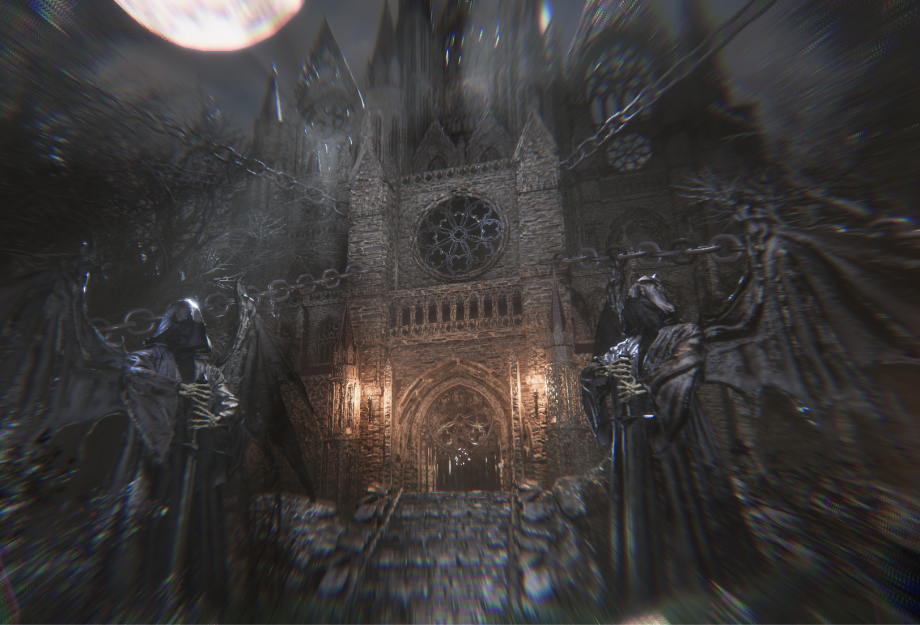 The HDRP workflow uses physical lights but there are many types of lighting measurements. In this case, we used Ev100 since it was the most comfortable to work with; it respects small value adjustments and also has the same lighting values as in real-life.

In Shadow Map values, we used the best possible quality to get soft shadows.

As we mentioned earlier, we divided the project into sections. This decision was made because we were using Cinemachine (it was easier to work with).

While moving across the environment during the early camera tests, we had to decide the starting point of the camera shot and the place where it'd be connected with the next one.

Cinemachine offers virtual cameras and moves (like noise or cam shake and aim targets) to give a more interesting feeling as if a real person walked through the environment.

In total we had:

In Cinemachine, the main camera adjusts to the virtual cameras to render each section.  When we were creating each section, we always kept thinking about what we wanted to show using the composition. With a few composition techniques of photography, you can improve all of your scenes and guide the viewer's eye.

This step took us a long time, but it was one of the most important parts upon which the expected results depended.

We relied heavily on effects to make the scene more believable such as:

Visually, we chose to stick with the reference images and compared them with our current look. As we did that, we tweaked the parameters until we were satisfied with the final result. Just as with the lights, each scene had its own post-process adjustments.

Here is a sample:

A note: Unity has several articles and documentation on how to handle post-process and some free projects like "Fontainebleau" to understand and test different post-process values.

We can say that our biggest takeaway from this project was what we learned about the HDRP pipeline and how powerful it can be. Understanding how each part of the post-processing settings works was also a big learning curve.

At the moment, we are working on a new cinematic, it'll feature a car in a forest, and this time, we will be using ray-tracing with amazing camera work and realistic reflections.