The team of Ministry of Broadcast shared with us the details behind their amazing pixel art game: GameMaker as an engine choice, art style, creating an immersive story and more! The game is planned to be released in 2019. In order not to miss it, follow their Twitter page and add the game to the wishlist on Steam.

We started as two separate companies: one was oriented on the art, advertising and the graphics design and the other, more boring one, on the software development. Now we are one studio who have bonded over the game Ministry of Broadcast. There are currently 4 core members: Dušan Čežek, Sanja Čežek, Petr Škorňok, and Petr Melicherík. We are based in the Czech Republic in Eastern Europe.

As a studio together we have worked on several game dev contracts mostly based on bigger IPs from the USA and currently also from Japan.

We love to create 2D narrative-driven games but it’s not limited to one art style since it’s important to always explore our possibilities further. Anyway, Dušan became somewhat popular within the pixel art community with his Behance portfolio.

Ministry of Broadcast: the Start

An idea for Ministry of Broadcast started probably a year ago. The original inspiration was a video about building the Berlin wall and how families got separated over the single night in one city. It was heartbreaking but also interesting to explore this dark part of our neighborhood’s country history, it got connected in our heads with the current political issues we see in the world like immigration. As we’ve delved deeper into this narrative, our own dark fictional story became a thing. Suddenly we’ve felt that we have a message that we want to tell our players.

We’ve got lucky and got in touch with Dušan and Sanja thanks for their amazing work on the game A MIDSUMMER NIGHT’S DREAM: REPLAYED. We’ve clicked from the start thanks for our common stupid sense of humor and after a while, Ministry of Broadcast became a project that we all care for very much.

The story of the game is set in a country which has been divided by THE WALL. The only way how to cross the borders to the other side is to win in a TV reality show organized by the regime. The main protagonist signs up for this not knowing what to expect but he’s hoping that he will reunite with his family soon.

The gameplay mechanics are addressing the themes like groupthink, obedience to authority, fake news but at the same time, the inappropriate jokes and the absurdity of the system are playing a big part of our narrative.

Because we haven’t been deeply rooted in the game dev community, we could start fresh and do whatever we wanted without knowing that this is not a way how you should make games nowadays. That’s why P. Melicherik came one day with an idea of making the movement and controls similar to the original Prince of Persia from 1989. This idea went totally the opposite direction than “the tight controls” that you see most of the time in the modern games and it was the very first risk we took. This style of movement became our signature since then and the rest of the game feel developed from there. 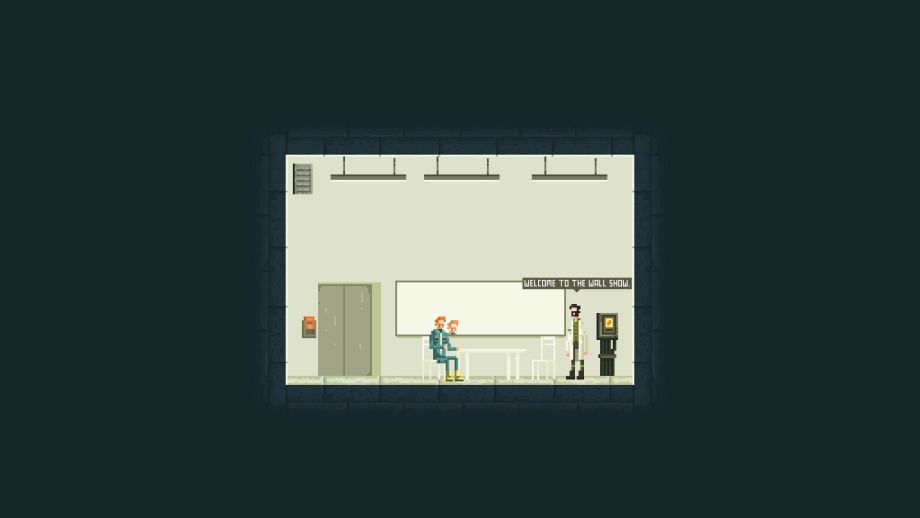 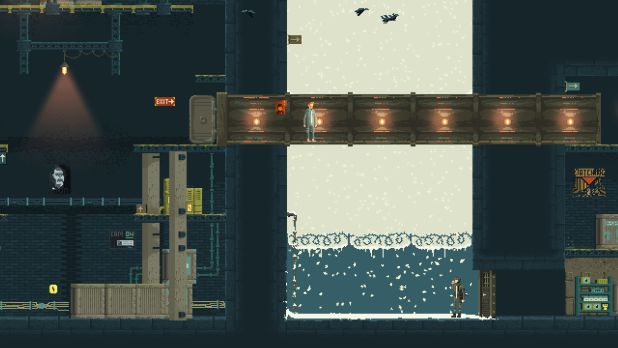 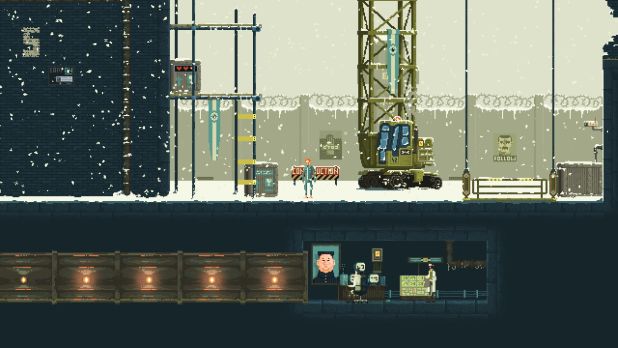 Another step in the opposite direction we took was a decision to built in most of the UI elements within the environment not to break the player’s immersion. We are trying to avoid usage of the abrupt popup screens leading the player the right way and teaching him how to interact with the game. There are small hints deliberately placed around the levels and there’s a leading color helping you find a way (hello Mirror’s Edge). Even the health bar is part of the level. One of our inspirations here was also Oddworld: Abe’s Exoddus which did a tremendous job with showing the hints to the player on the scrolling screens that feel like natural part of the environment.

Creative direction was inspired by Orwell’s 1984. The Regime our game is set in is dark and ugly. It’s in great need of some good marketing in order to make it appealing and raise the constant curiosity of both the player and protagonist. Therefore, our creative team decided to combine visuals that reflect the roughness and color limitation of the Russian and Czech Avant-Garde, in combination with the beautiful vintage posters for Swiss Alps advertising.

The Engine: Why GameMaker?

Honestly, we feel that GameMaker: Studio 2 deserves much more attention from the developers. It’s a great tool totally capable of building games like Hyper Light Drifter and yes, it requires you to abandon the drag and drop functionality and go deeper into the engine but it will make the initial development easier. We wanted to prove that you can actually build a nice 2D game in it and from the player’s reaction you can tell that they don’t care what kind of engine the game uses. They want to have fun.

It’s great to see YoyoGames constantly pushing new updates and working with the community towards the common goal. Just look at Nintendo Switch support which got into open beta recently.

At the same time, it’s important to address the bottlenecks like the usage of GML, limited post-processing capabilities, work with the shaders or the small amount of the 3rd party extensions.

Anyway, we wouldn’t blame the tool for bad games.

For this particular title, we took a basic concept of the story and transferred it into an artistic expression. We wanted to confront something very ugly and something beautiful. The calmness of the snow with the tension of the system. Rough edges and soft colors. The totalitaristian system is not something new, but our approach to it can be. In the world of today, a system like this would hire a good PR agency to rebrand itself. Instead of scary red visuals, they would use inviting baby blue. The same way they turned the goal of the regime into a reality game. Pure showbiz. We have limited ourselves with the strict color palette. That makes the creation of each asset much harder, but at the end, it is much more rewarding. We have a clean level design with high readability and color storytelling. At least we are aiming for it. 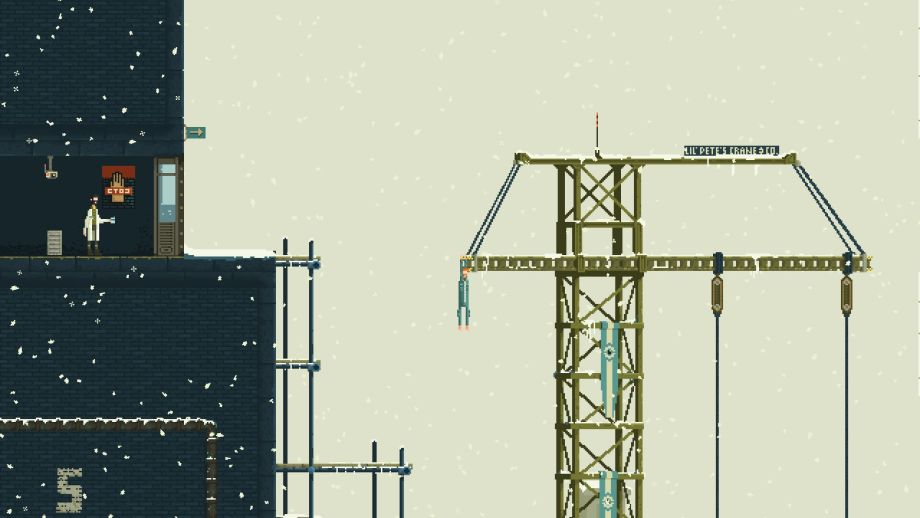 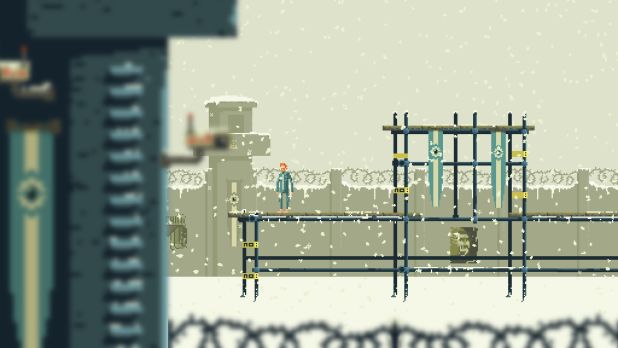 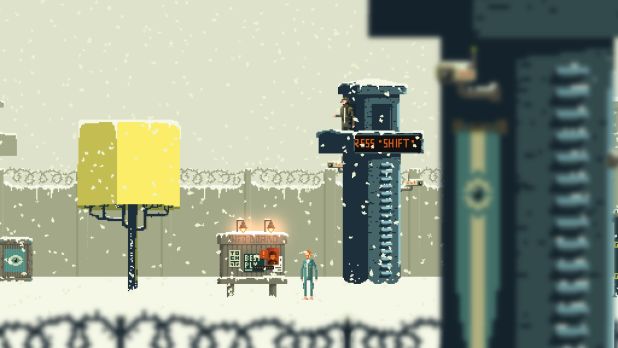 Animations were the most complicated part for us since none of us is an animator. Our dear friend Marko Stanojevic is helping us with some real animator knowledge, but since he is not a full-time part of the team, a lot of animations are done by us. We do not have much of animation experience and we learn about it along the way. The pipeline didn’t exist and it is something we have developed along the way. We have decided that we do not want to copy the real world, but to try to implement the character of a person or a thing into each animation. Small details like the bouncing of a hair to give more life into movements or reactions. We use PyxelEdit for illustrations and animations, very nice and clean app for what we need.

Our main goal is not to include anything in the game which will not be a part of the story. Snow is falling slowly when we want to create calmness, snow is falling heavily when we want to make more of a tension or snow is not falling at all at the moment we want to create more of a void feeling. Posters, stickers, drawings, writings on the wall are there to communicate with players. Sometimes they are part of UI, sometimes they are warning you about the next traps and sometimes they are part of the storytelling. We are animating some small background things throughout the game just for fun. For example, each time our main character passes next to some of the fans, there is a wind in his hair. Very important and budget friendly.

The crow is the inner voice of the main character personified. His relationship with a crow is a complicated one and no one is sure if the crow really exists or it is just a product of his imagination. She comments all decision he makes, she makes fun of him but also she is helping him by giving a viewpoint on the things from a different angle.

It’s very challenging to say NO to our own ideas. We brainstorm on so many things and have fun but at the end of the day, we need to sit down and make the development cost-efficient especially when you are self-financing.

If you found this article interesting, below we are listing a couple of related Unity Store Assets that may be useful for you.

Team of Ministry of Broadcast