A detailed breakdown by Vinicius Paciello about the challenges of rendering highly detailed scenes.

Vinicius Paciello discussed the production of his latest project inspired by David Fincher’s Zodiac. A crime scene, 1968 Ford Galaxie 500, the killer fading into darkness. What does it take to render this level of detail?

Hi! My name is Vinicius Paciello, I’m a 3D Artist living for now in Brazil. I was a musician till 2012 and in 2013 I decided to return to architecture college. Turns out there was no time anymore, so I decided to study some courses that would be useful. Studied AutoCAD and the teacher showed me 3DS Max and Architectural visualization. That was mind-blowing. Until today, I’m very fascinated about raytracing light and bringing realistic results from a CGI scene. I’m really thankful that I was late to restart the architecture college. Did a brief architectural visualization course with Mental Ray which showed me some basics and the rest was all about myself. Late 2013 I started to work in an archviz company but soon I realized there was no creative development in that (it’s all about extruding walls and merging archmodel assets) and I looked for 3D advertising studios. Worked for some studios and agencies as a freelancer, and now I’m currently looking for full-time jobs, studying A LOT and preparing a reel for VFX and cinematics (which now is my main goal). 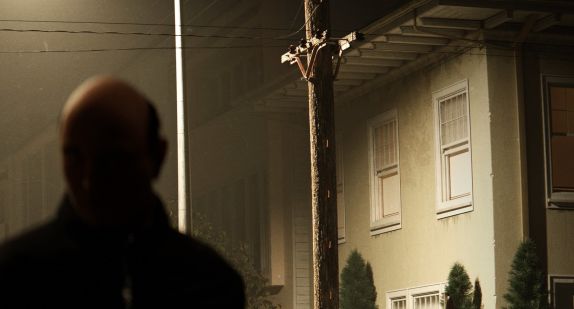 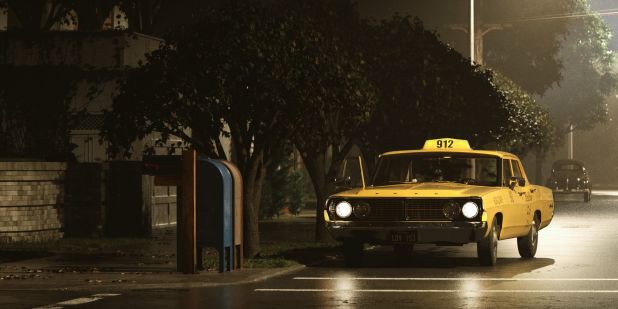 This is the Zodiac Speaking

This project started when first watching the movie itself. There is a stunning shot there which is basically the view from the kids who witness the crime, upstairs in the house other side of the street. I decided to recreate that shot, but things went a little far from what I started. Also, as I’m looking for job in the cinematic & VFX field, it would make much more sense to work in a full movie shot, trying to get as realistic as possible and detailed as much as it could be in reality. Just thought about it in the beginning and let the idea go away but when I showed this movie to my girlfriend and rewatched the shot, I decided to invest my time in it.

After I get the concept designed in my head, I usually start shaping the scene with boxes, bipeds and simples shapes. Lately I’ve been interested in photography and movie direction a lot so I always choose a kind of lens also. First thing I started after this was the witness’ house, maybe because it was the most easy part to do, due to the lack of references. I found references for this project but that was quite a pain because I wanted to mimic the 1968 mood and that was hard to find. In the end it went all right (even found pictures from the real crime). 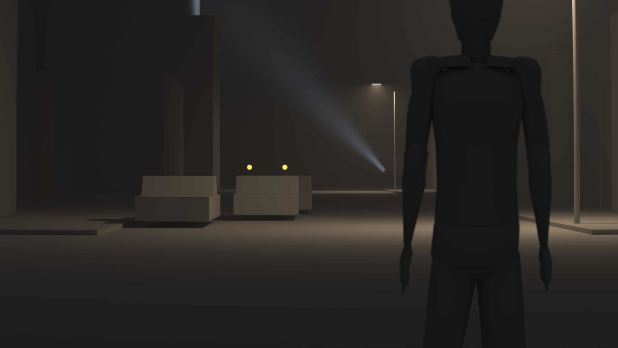 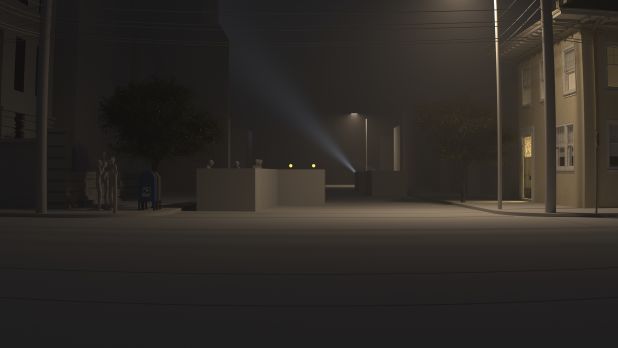 The scene was entirely modeled in 3DS Max. After blocking the scene, I worked on each house separately and merged them into the main file. About the assets, I try to model them as detailed as I can and then I shade, usually with UVW box and using several bitmap channels. Some people hate when I say it, but if started unwrapping everything I wouldn’t have finished this project till now, and honestly, you cannot see any seam, even in close-ups. Only a few objects were unwrapped, like the Zodiac character, the entire car and some others. The most challenging part, which until now I’m not 100% happy about, is the asphalt. Got it right but I absolutely couldn’t render it because of render time. It was requiring too much antialising to clean so I had stop the render, limit the AA number and render it quite grainy. Tried to increase and decrease global subdivs of the mesh but no success. Had to remove some fireflies in Photoshop. Still not happy with it, it’s looking good but it’s not as I liked it to be. It lost a lot of definition.

The car was definitely the hardest thing to model in this project. Detailing it fully took me months. It’s a Ford Galaxie 500 1968. There isn’t this car here in Brazil. There is no blueprint from this car (found a pretty simple one which wasn’t much helpful). Had to do it looking at photo references only. The lack of internal references almost made me give up on the internal shots and the amount of things you have to model to get it realistic is absolutely insane. The door components, which we don’t see when the door is closed, are insane to model and I had to give it a try, with very poor references, because the door was open in the crime scene. Those guys who model full-detailed cars are the true heroes. Looking forward to getting a new idea and starting a new car with a better modeling approach (and with a blueprint, please). Learned a lot with this one.

As I started to lay out the scene, there is not too much about working with composition, it’s always there just waiting for the assets to be assembled. Guess I started the project with the composition in mind already. Sometimes it changes, sometimes not. The other shots were created just moving the camera and finding a good angle. I guess distraction does not happen because the amount of details is almost homogenous. The main subjects from the scene are highlighted with lighting and contrast.

Lighting was, believe me, the part that I almost did not work on. There are only real lights there. I just worked on their intensities. A night weak skylight, the light poles, the rooms in the houses and the car lights and headlights. The raytraced fog did everything. In the movie, right before the crime scene, the movie shows the street before this one and there is a truck (I guess it was a fire truck) with some reflectors on giving us a stunning fog, which I tried to recreate putting it in the background. Really liked it.

Using the new Vray workflow, things were quite straightforward. I did not have to worry anytime about subdivision and this kind of stuff. The worst part was that I wanted to render it in 8K and the scene is HEAVY. As I said, I had a lot of trouble with the asphalt. Still not solved it. Guess it was because the reflections needed to travel the whole scene and that was pretty hard to calculate. About hardware, I mainly work with a Dell XPS 9550 notebook (which is a BEAST machine and gives me the opportunity to work when I’m not home) and a desktop with a i7-3770 with 32GB of RAM. It’s an excellent machine, but we can see this i7 is getting old compared to the newer ones and I had to wait 72 hours for this render on this machine to finish. To render the scene without the asphalt grain, the render would have easily taken one and a half week. Maybe more. The other renders were quite fast because they were rendered in 1920×720. Still trying to figure a way to get faster bokeh, though. Anyway, a breakdown is coming (rendering right now) and soon I’ll be posting.