Evan Gintsiak shared his approach to an Adventure Time fan art project made in ZBrush, Blender, and Substance Painter.

Read our previous interviews with Evan

Hi everyone, thanks for taking the time to read this interview, and big thanks to 80 Level for interviewing me once more, it’s a great honor and a lot of fun every time.

My name is Evan Gintsiak and I am a 3D Character Artist. Currently, I work as Director of 3D technologies at Datagen, a computer vision startup.

To be honest, a lot has changed since the last time we spoke, and the biggest change for me was that I moved to Montreal, QC, Canada. I also started teaching lately, and currently instructing at a workshop on stylized character portraits at Vertex School Online, which is a very unique and cool experience for me. Other than that it’s all more or less as it was. 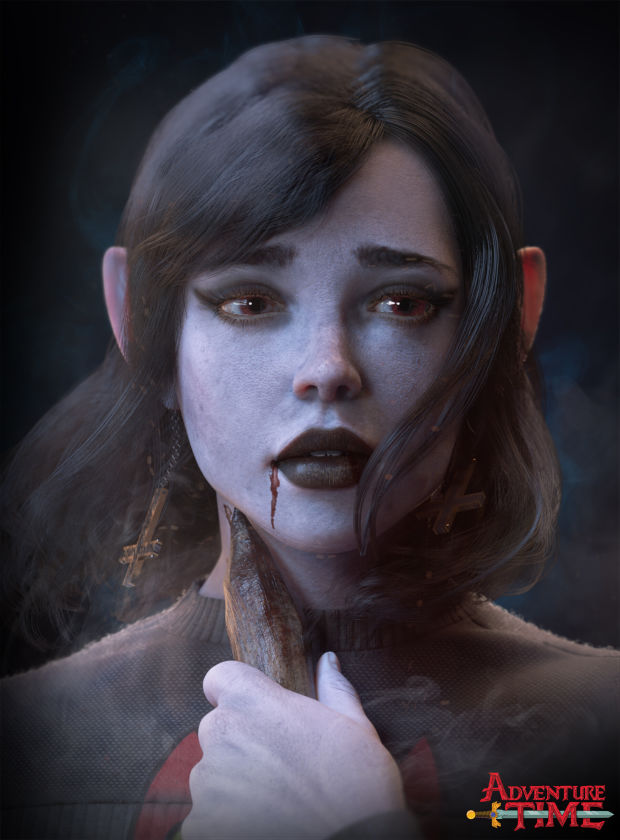 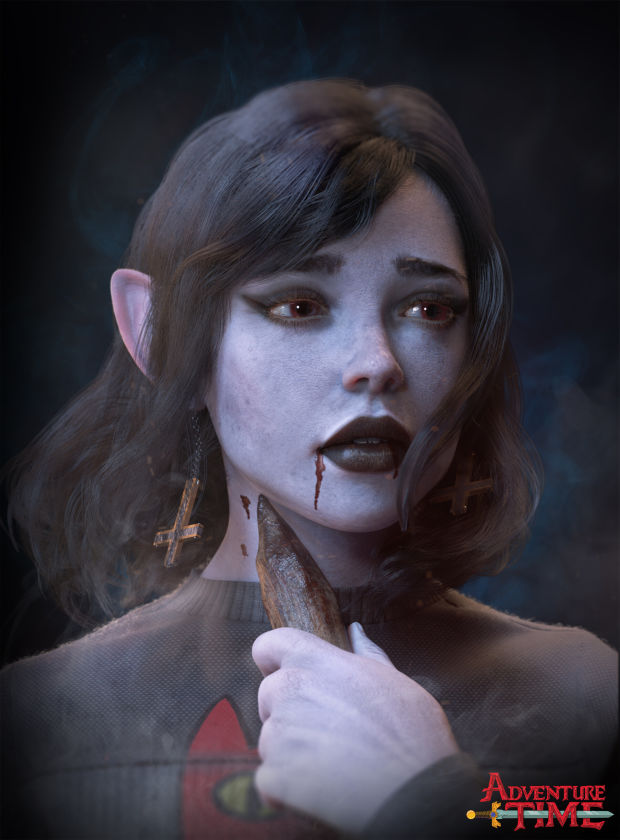 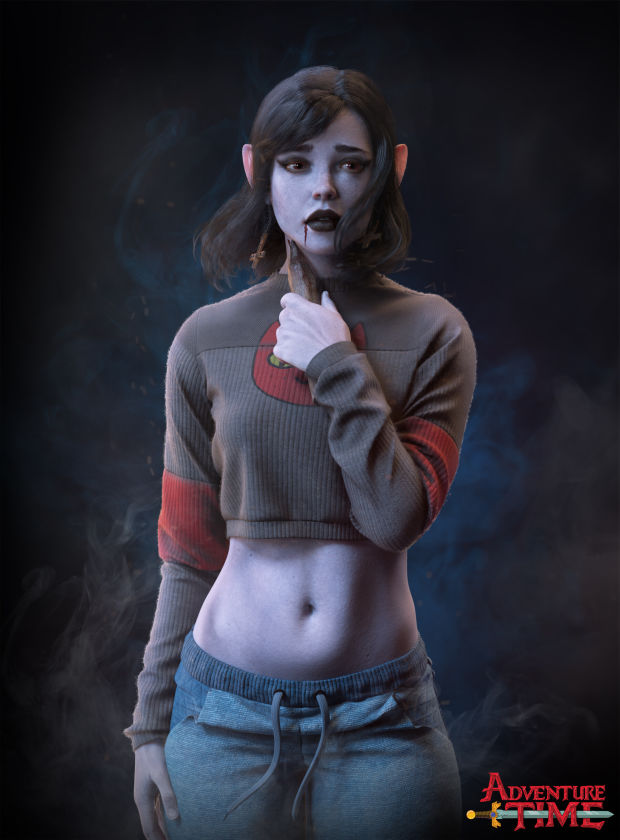 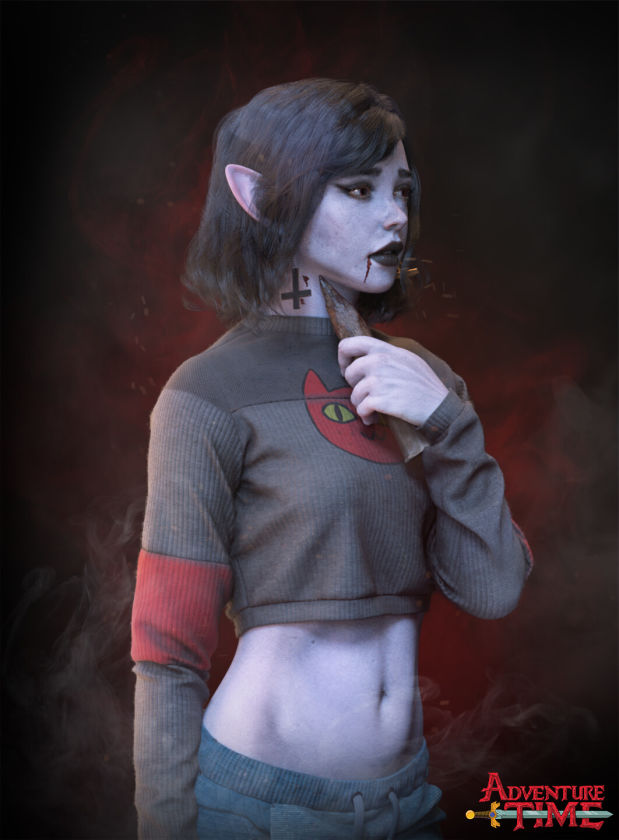 Marceline: About the Project

Marceline was actually part of the workshop I am teaching – it’s an 8 weeks course where I show my workflows, process, and thoughts when taking a simplified cartoon character and translating it to a semi-realistic (as I like to call it) style - similar to Marceline or Beast Wirt I did around a year ago. Marceline is my favorite character from the show “Adventure Time” and I really wanted to model her a long time ago, so the workshop was a great opportunity for that.

No particular concept has been used, but rather a collection of different frames from the show itself, with some fanart – it’s always important to examine how other people see the character and interpret it, as well as some references for expressions, anatomy, mood, etc. Then I basically used all of these in combination to create her as we progressed in the course.

To be honest a lot of things improved for me since the last interview, I had a couple of successful projects and a couple of works that were not as good, but I have been able to learn from them a lot. I think I improved my anatomy pretty well but I definitely still need to work on it.

I also feel that my shading skills have improved much more, I have been using a lot of layering in skin shading, combining projected texture maps with a bunch of procedural effects and hand-painted texture maps. I am basically projecting HQ textures as a base, then painting skin in Substance Painter and combining these together with procedural blocks and nodes – and I really like this approach, to be honest, as it gives the skin somewhat a unique feeling, not stylized, not extremely realistic but something in the middle, in a good way if that makes sense.

I also can say I learned a really nice new workflow for generating hair from mesh in Blender. Basically, it's a very simple process but it works for me. I am extracting guides from 2 different sides of a hair strand created in ZBrush and using these to form different layers of hair. For example, the lower part will create the base mass of the hair, and the top part of the same strand will go over it and create more break-up in the hair flow. This makes sure that the guides are locked in their respective place and helps to keep the flow natural. 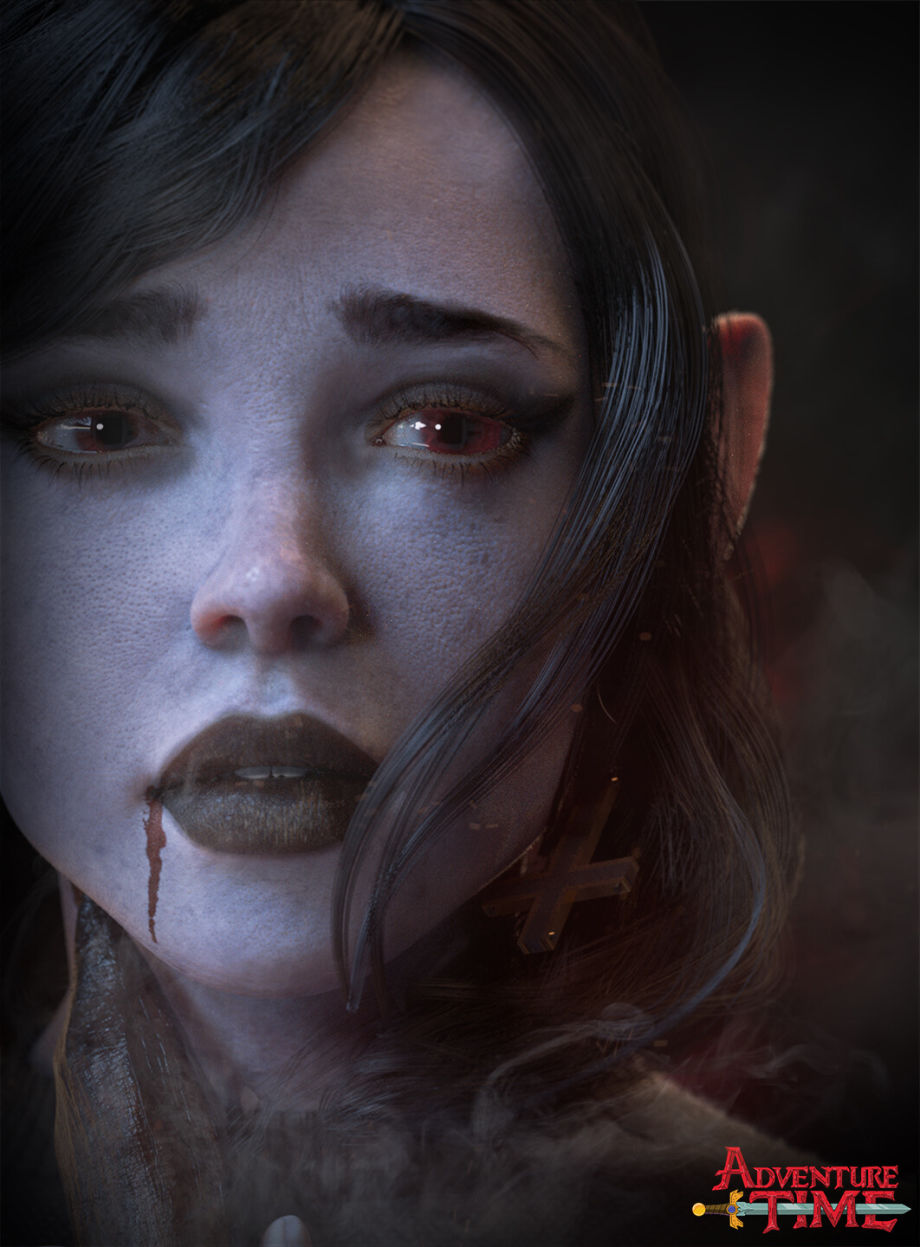 Sculpting started from a very simple base mesh I have that helps me keep the proportions and placement of eyes, nose, and mouth to my liking. First, I am doing a bit of sculpting to get the general shapes and volumes. I am doing it in symmetry but breaking it and posing very early in the process – so I basically sculpted her expression right from the beginning. 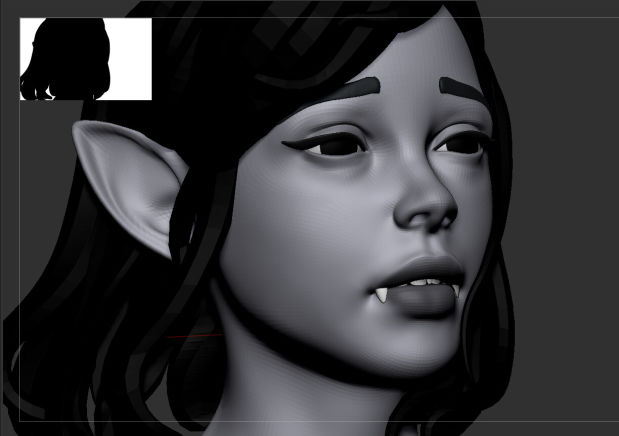 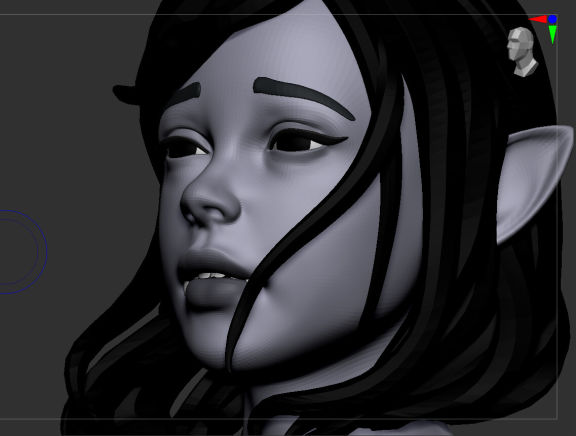 Since it was supposed to be a portrait only, I added the body and hands pretty late when the face and textures were already done. I really wanted to add some kind of pose, so I started exploring different compositions, and a couple of hours later I came up with the one you can see in the render. I blocked out the base pose first and then added anatomy. To be honest, although I improved a lot, I am still far from being “good” with anatomy. My trick is that I know what I am looking for in terms of references and then I basically observe and study the reference very closely. My Pinterest is full of half-naked people in different poses. 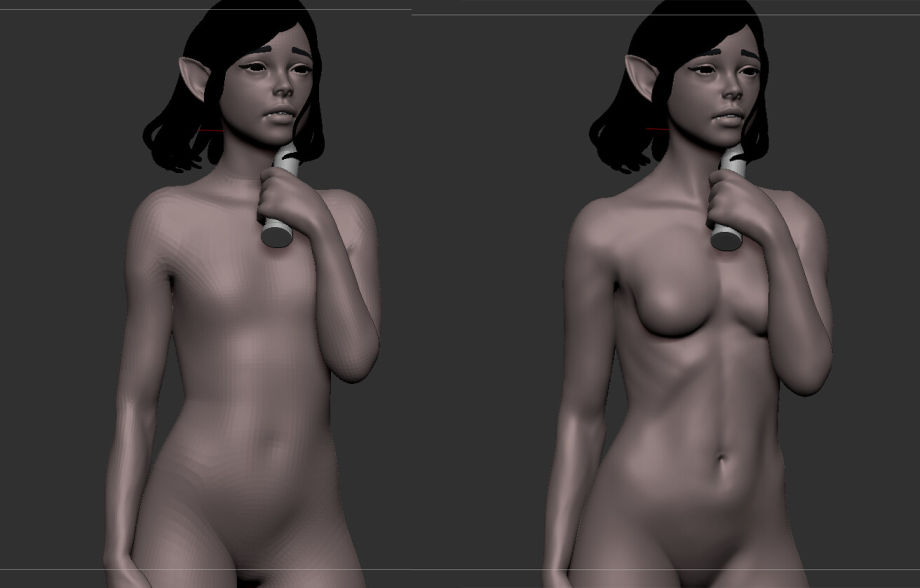 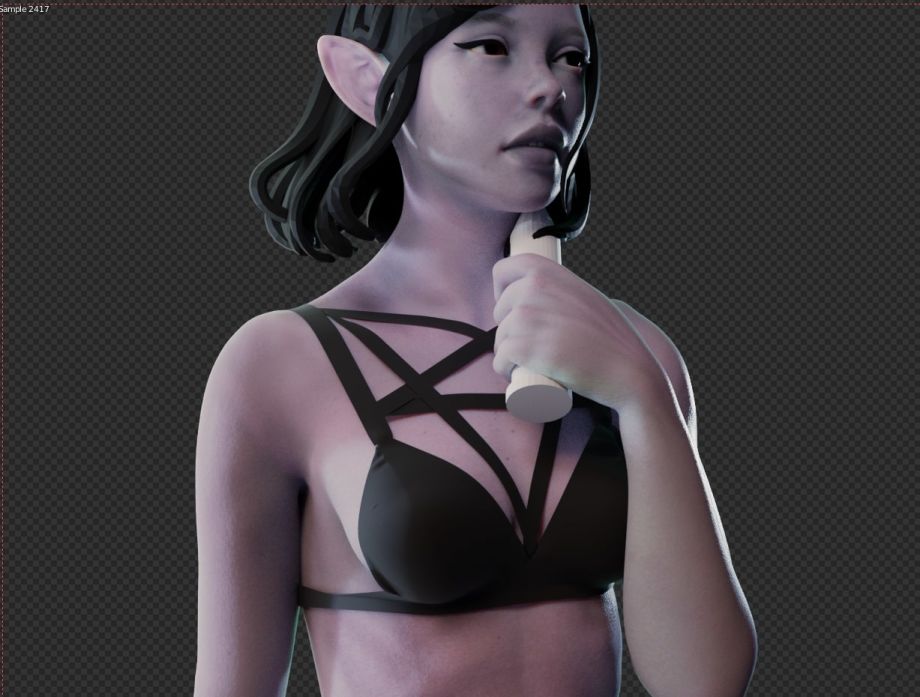 The process here was very simple. I tried a couple of iconic outfits from the show, but there were two I really liked which are her crop top and sweatpants from the mini-series “Stakes” (the hair and vampire stake is also from this mini-series) and her rad cat sweater. I found some real-world sewing patterns on the internet (usually, Russian sewing forums have great patterns), then recreated those in MD, added some folds in ZBrush, and exported them to SP for texturing and Blender for rendering. In Blender, I also added a solidify modifier and a subdiv modifier to give the clothes nice-looking creases and folds. Some manual tweaking was done as well. 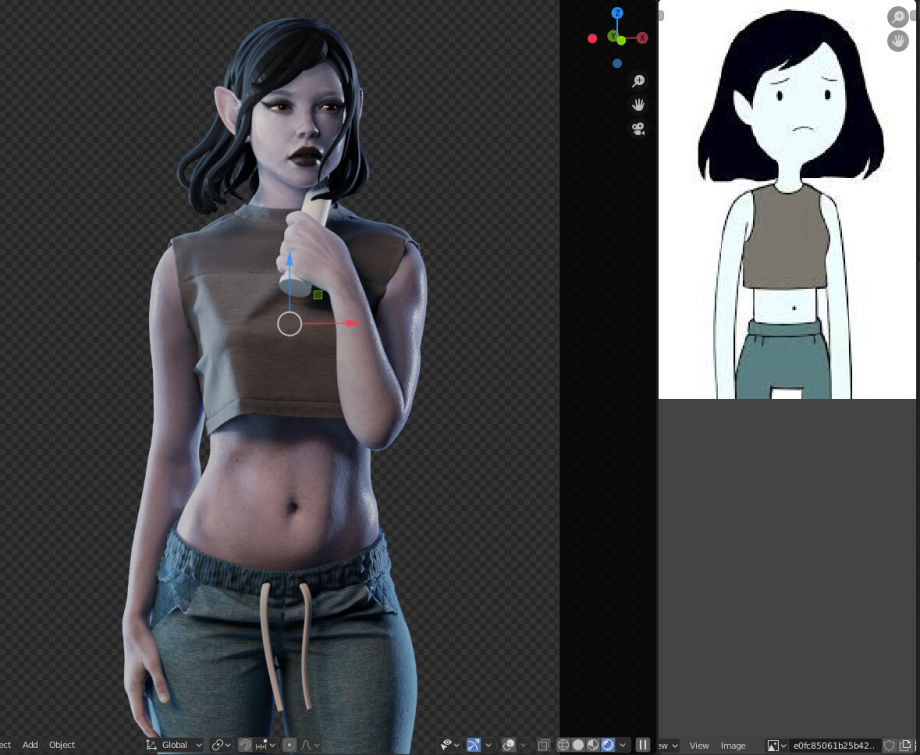 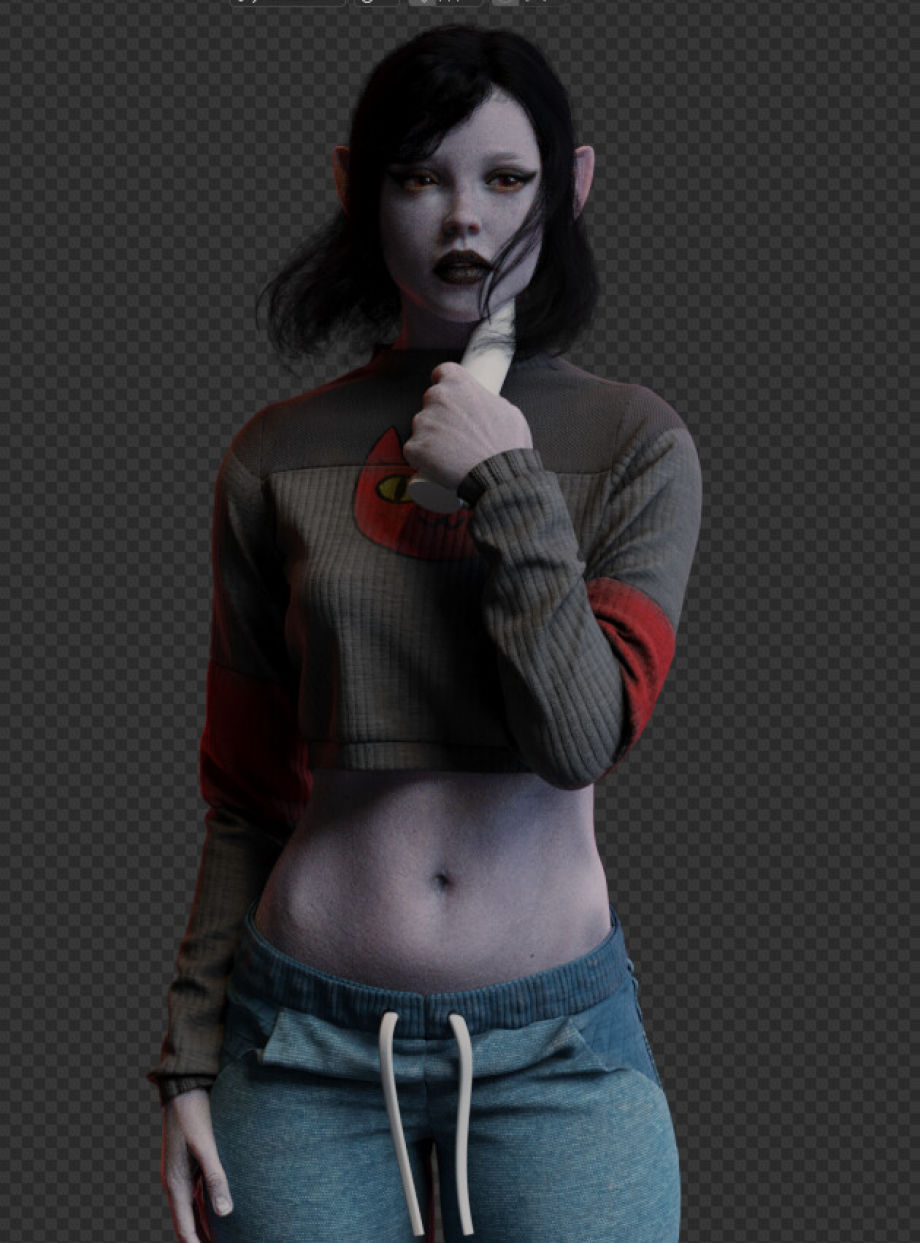 The hair is a very fun process for me. I start in ZBrush by laying strands of hair in the shape and the flow I want to use a hair curve brush with. Then I export the base hair mesh to Blender and cut each curve in the middle (horizontally – in reference to the curve). It gives me the ability to extract the top and bottom edges for the hair. The bottom edge will be the guide for the underlying mass and the top is for the break-up. Then I am converting the edges to guides using HairNet addon (it requires some minor steps before like inserting the root vertex into the scalp and making sure each guide has the same amount of points) and playing with children and hair settings to achieve the final result.

Then I repeat the same process for each part of the hair. You can do it by strand or by groups and clumps of hair. 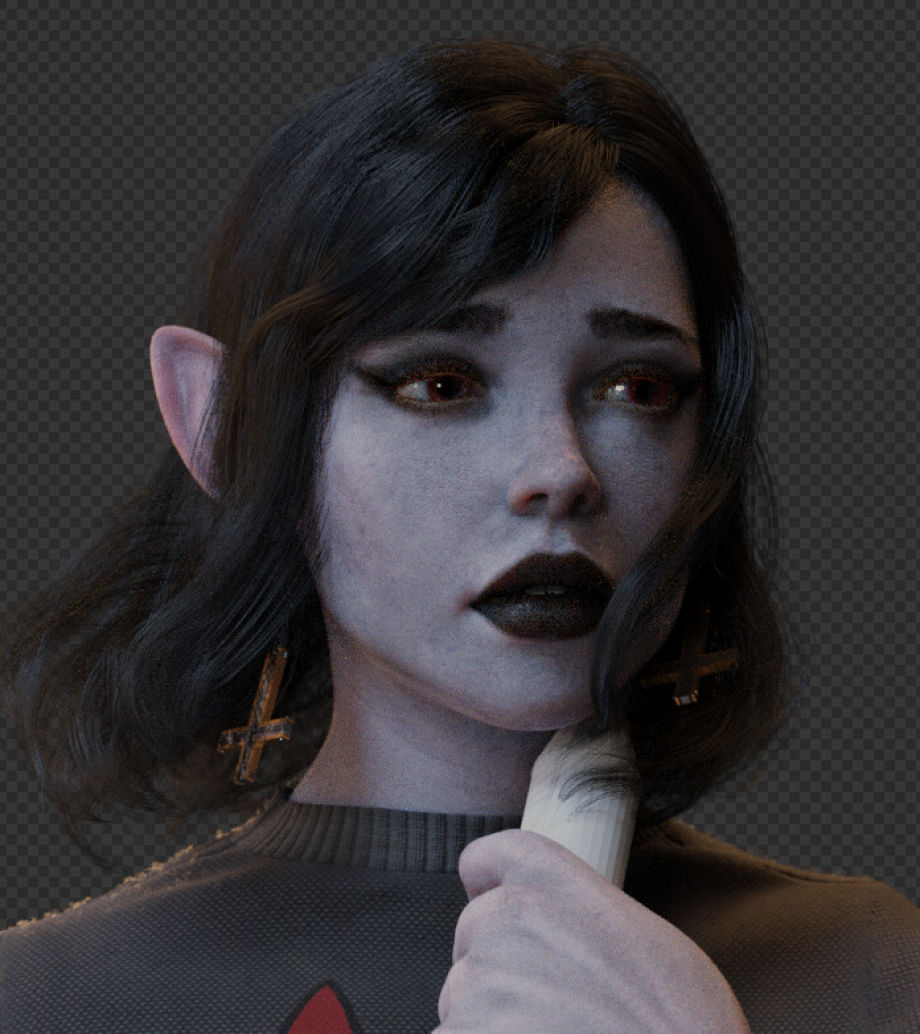 I started with a set of maps from Texturing XYZ for the base, projected the base diffuse and displacement onto the model, and transferred the textures using ZWrap. I am using the “plane projection” method – basically, a plane with the texture applied with a lot of subdivisions that wraps around the model.

I then cleaned the texture and projected images from a Texturing XYZ photoset to clean up all the problematic areas of the texture.

For the body, I used a pack of female body textures and just projected them in ZBrush.
I painted some masks (like the makeup) in Substance and the rest was done in Blender using nodes. I was able to manipulate the color using a lot of mix and curve nodes in Blender and combining them with different shades of blue, grey, red, and other colors. 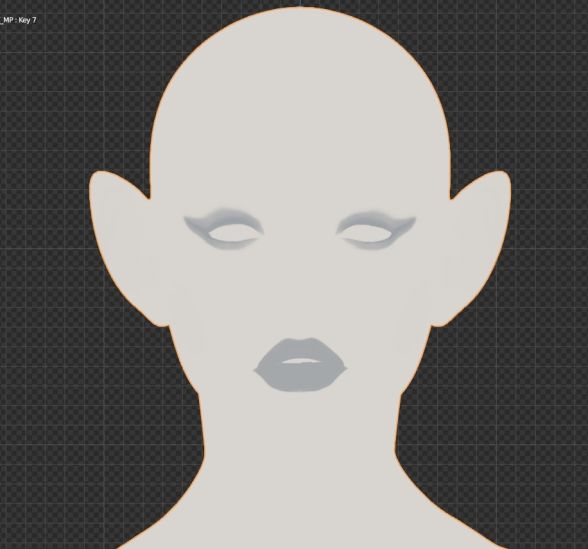 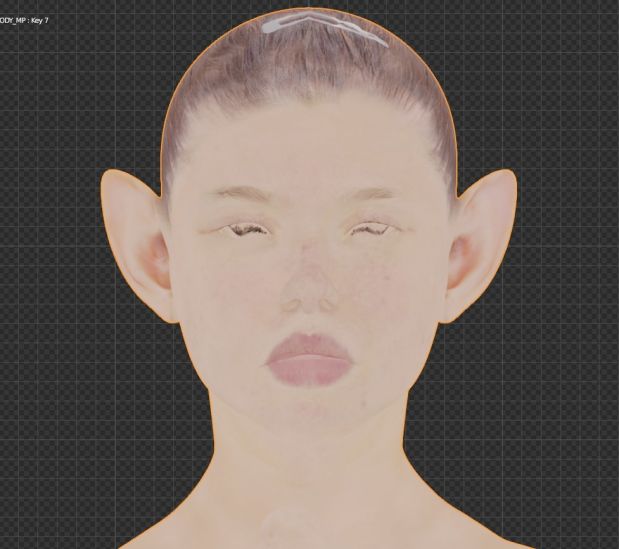 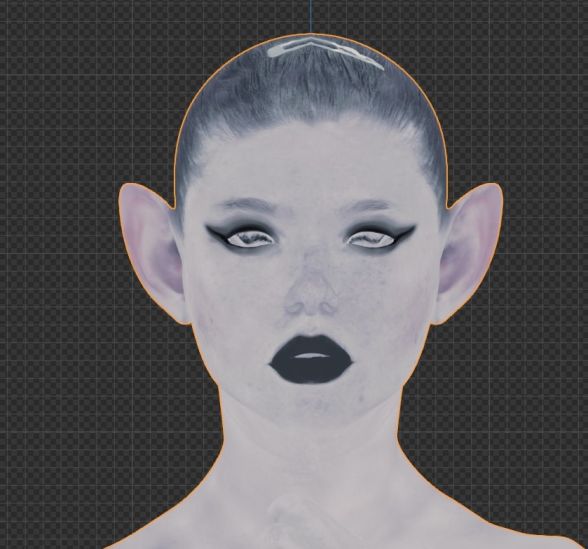 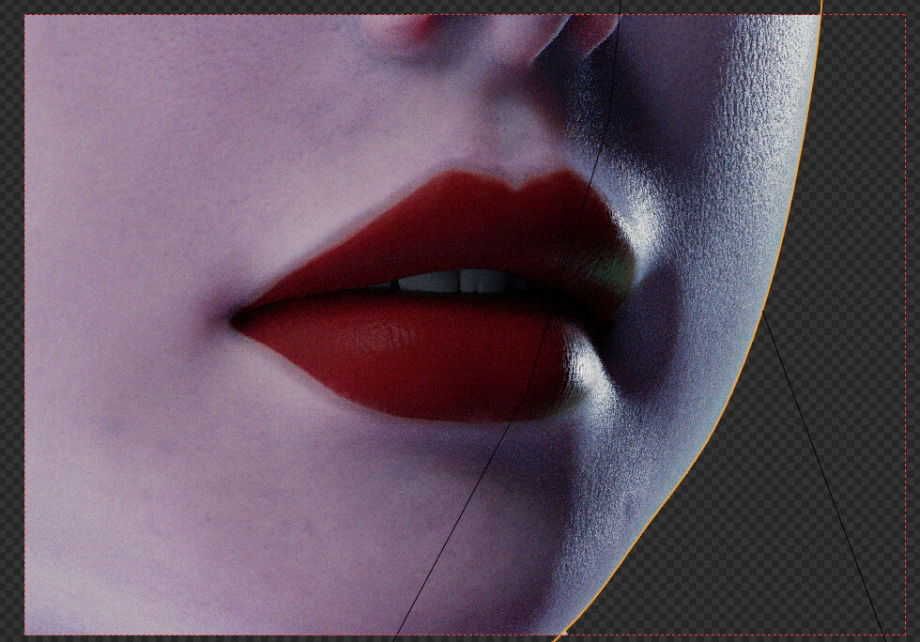 The clothes were simply textured in SP using all the usual tools and some downloaded substances, nothing fancy. 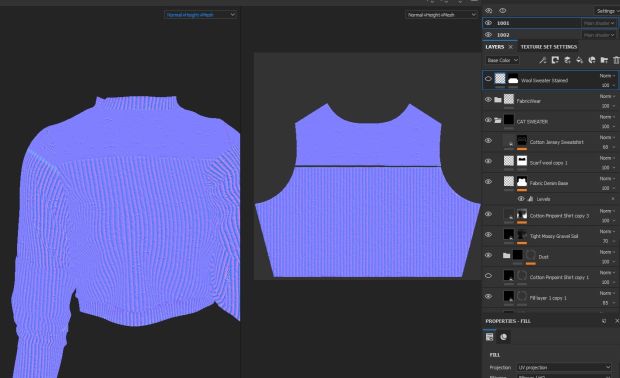 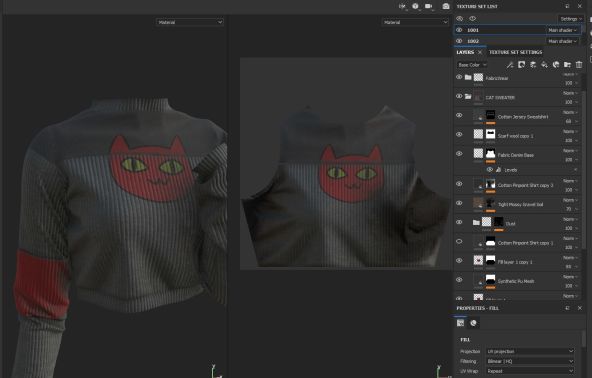 For the lighting, I did quite a few explorations and tested various different lighting techniques but ended up using a Rembrandt style lighting. There is nothing better than looking at photography lighting and mimicking it. Since I am rendering in Blender Cycles, I really like playing with the Color Management settings, choosing the “Filmic” option, and playing with Exposure, Gamma, and RGB Curves settings to achieve a more cinematic result. The rest of the compositing was done in Photoshop where I added some smoke and particles and played with brightness and color correction. 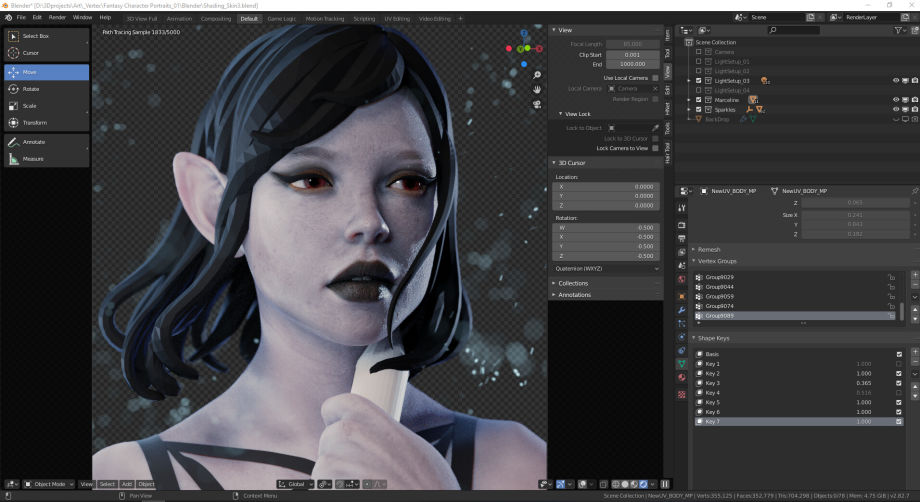 How to Improve Your Craft

Everyone's experience is different, I guess. For some, doing small works like speed sculpts or shading exercises on a frequent basis might help. For others, working on a large-scale project that might take several months and trying to finish it without giving up might be more beneficial. Taking a course or working with a mentor is also great if you are willing to invest the money. You need to build a plan and stick to it. Consistency and structure are crucial and might be the most important thing when learning.