Rodion Vlasov shared the production details of his character art project Stinks But Feels Good made in ZBrush, 3ds Max, and Substance Painter.

Hi! My name is Rodion Vlasov, I’m 26 years old, from Russia, currently living in a small town a couple of hours away from Moscow.

I’m a freelance 3D Character Artist and prefer to work in realism. I have 7 years of experience in the CG industry, my first project was INSOMNIA: The Ark for which I made a few characters, weapons, and heads.

Then, I spent a couple of years making “hats” for Dota 2. A bunch of my sets was added into the game, so I earned some money for a good life.

More recently, I worked for Fatshark on Vermintide 2: Winds of Magic. It was an honor for me that one of my characters was on the cover of PCGAMER as well as on the final cover of the game on the Steam page and game launcher!

The latest job was for Blizzard which I can’t talk about so far. It was an awesome experience and a great team to work with. 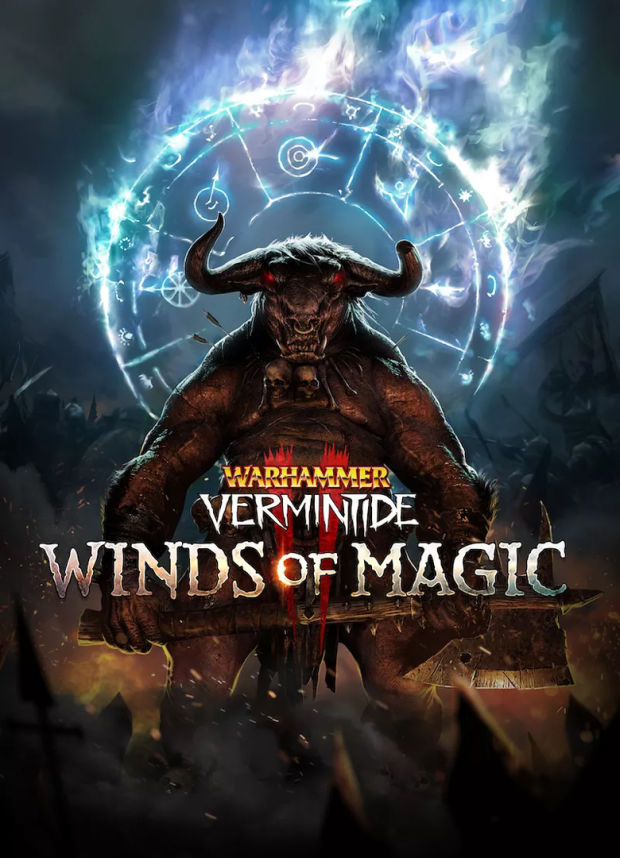 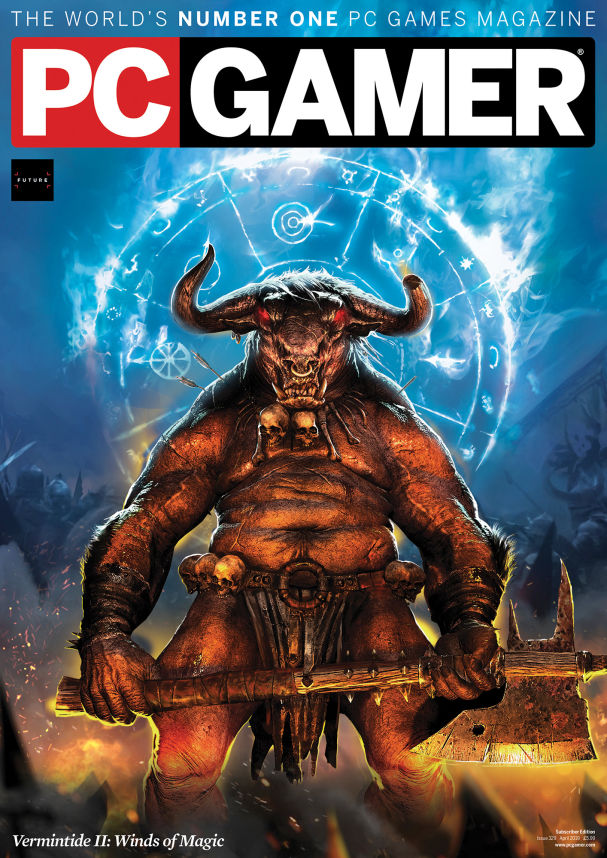 I started to draw when I was about 3, mainly people, houses, space, and continued drawing but not on a daily basis, - it was childhood after all and there were many more interesting things to do.

Then, somewhere at the end of 2002, I got a PC! And the first thing close to CG art for me was WC3's map editor, I spent a lot of time in it. Then there were a couple of other editors, including the one in Far Cry.

Summer, 2006: dad bought me 3ds Max 06! Of course, it wasn’t an original copy, - let's be honest, the soft is too expensive, even for the first world countries.

My character art journey began in 2007, and I don't really remember what inspired me back then, - I was just a kid living in a small village who wanted to create his own world. And I still do. 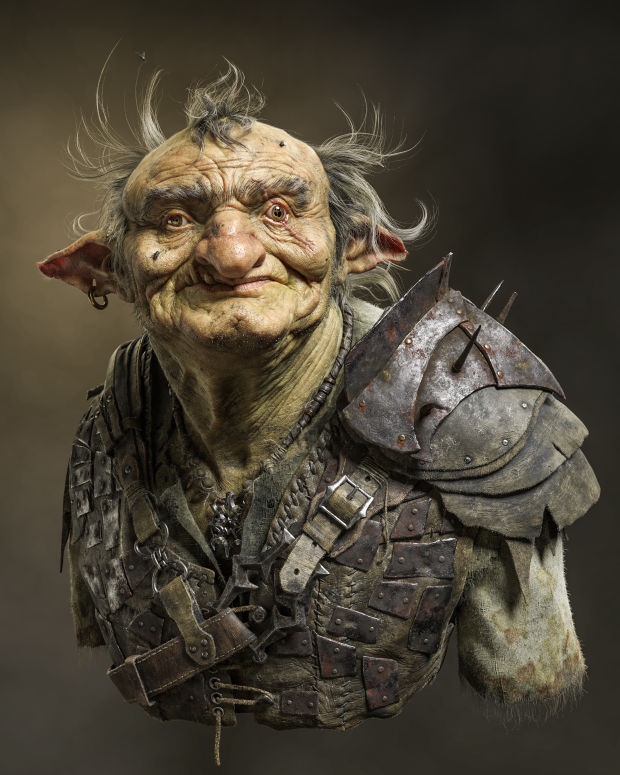 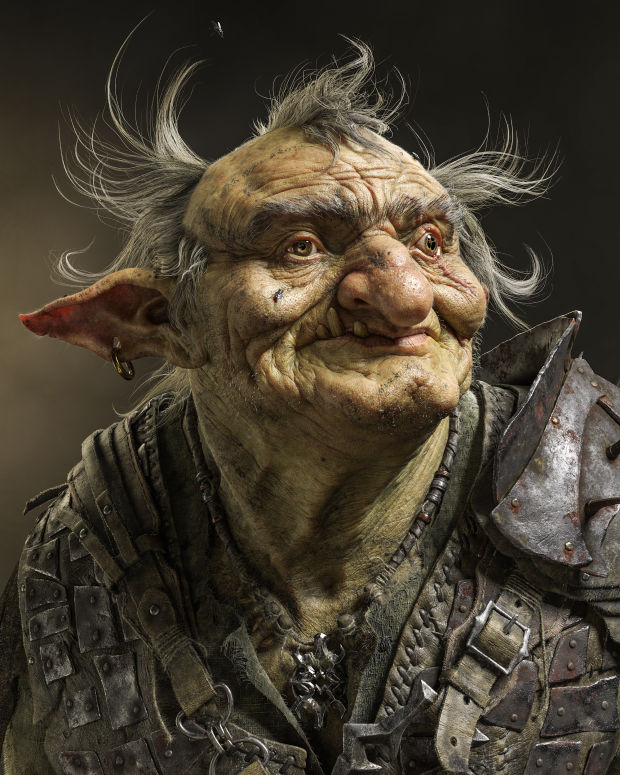 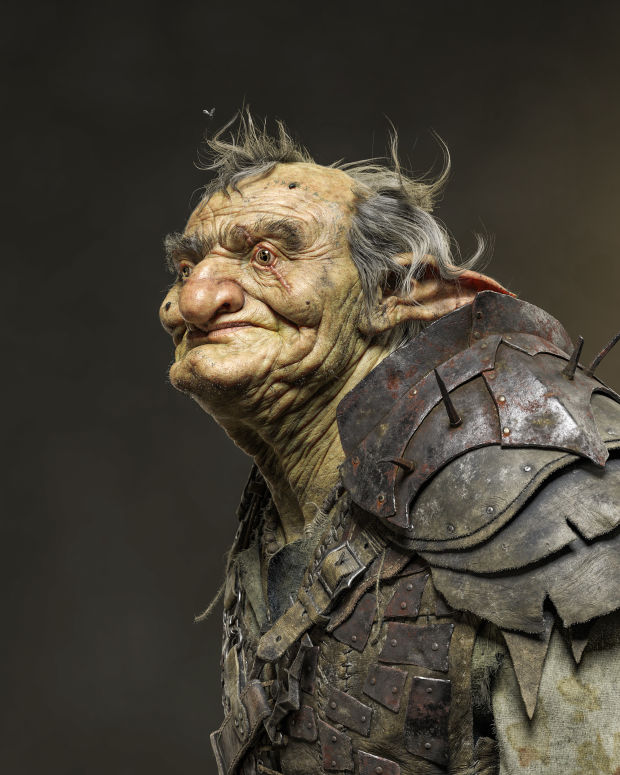 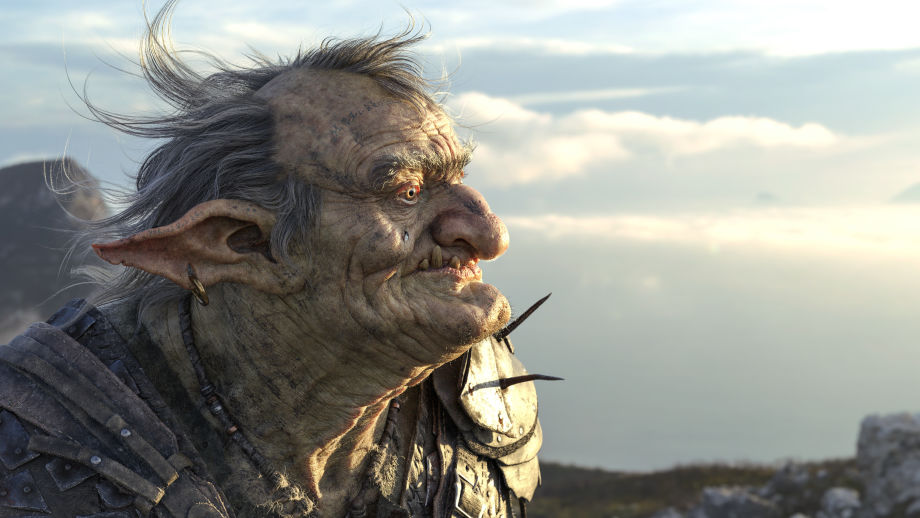 Stinks But Feels Good: How It Started

It is funny but this project was nothing at the beginning, just doodling in ZBrush with the folder named “quick goblin”. Yeah, very quick, took me 2 months in the end!

After a day of working on it, I realized that I really liked how this guy looked, plus I posted some WIPs on my social media and people really liked him too. So I decided to push him until the end because the last time I made a finished model was too long ago. I made a rough concept for him to see in what direction I wanted to go, the idea was to create a realistic goblin with some LotR vibes. 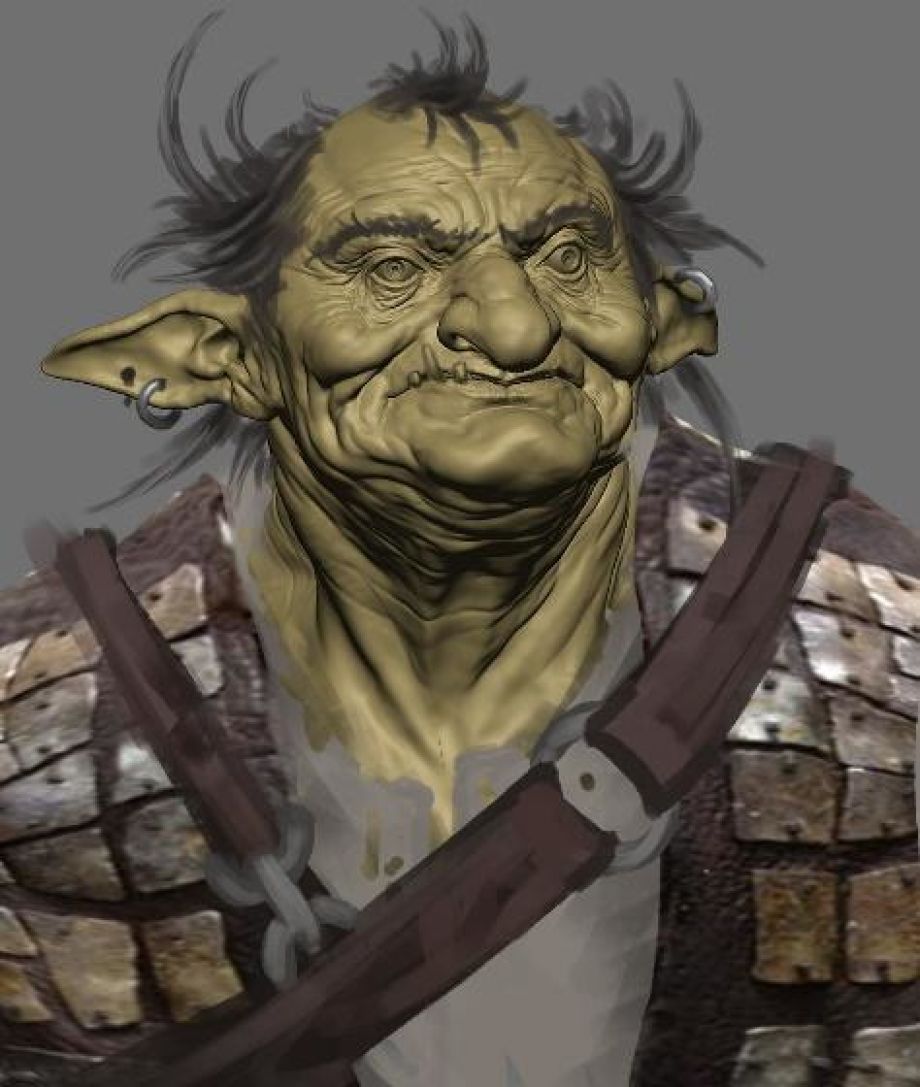 For refs, I use Pureref, a very good application for working with tons of pictures. In the middle, I placed my rough concept, and then I gradually added pictures for the current tasks. There are a couple of zones, for example, outfits, screenshots from the LotR movies for mood and overall look, etc. 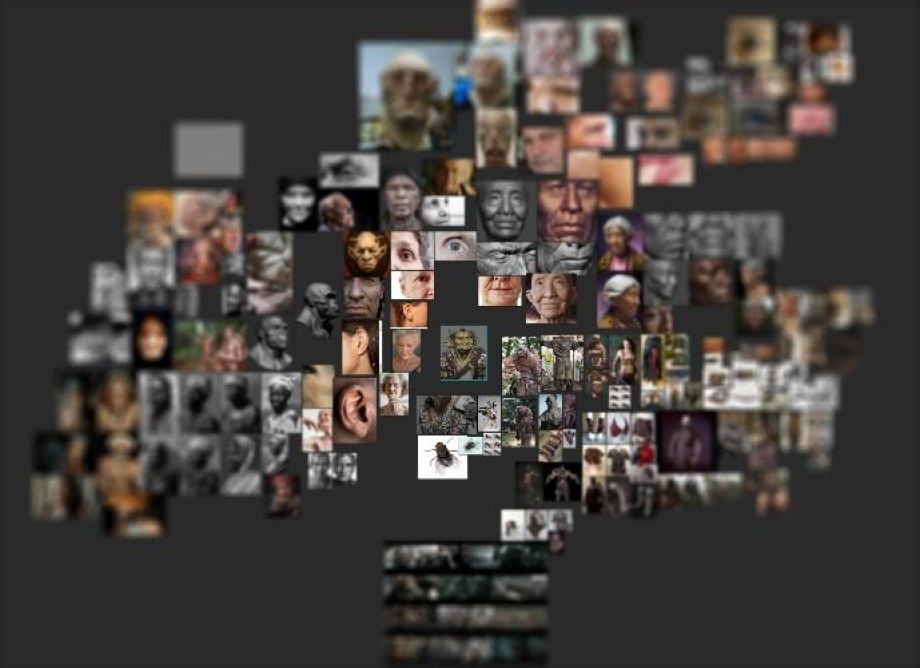 I have a video on my YouTube channel that shows the sculpting process for this goblin:

I guess the key moment was when I decided to make the goblin's cheeks a little plump because it added much more personality to his face. He is not bad and not good, he’s just the type who gets into the army and is trying to survive there, and perhaps he hates all the things that are going around him, - that was the point.

A big scar on the eye was added to make his face more asymmetrical and create a point of interest, his “dead” eye.

Speaking of the tools, my favorite brush is Standard, the one brush to rule them all! Also, I frequently used Cay, DamStandard, Snakehook, and Slash2.

For the facial anatomy, I can’t really say anything specific, - my approach is based on the feeling of forms and anatomy knowledge that were gained through years of practice and learning.

For microdetails, I used alphas from XYZ, FlippedNormals Skin Kit, and other packs. The method with projecting displace textures in Mari seems boring to me, at least for personal stuff. 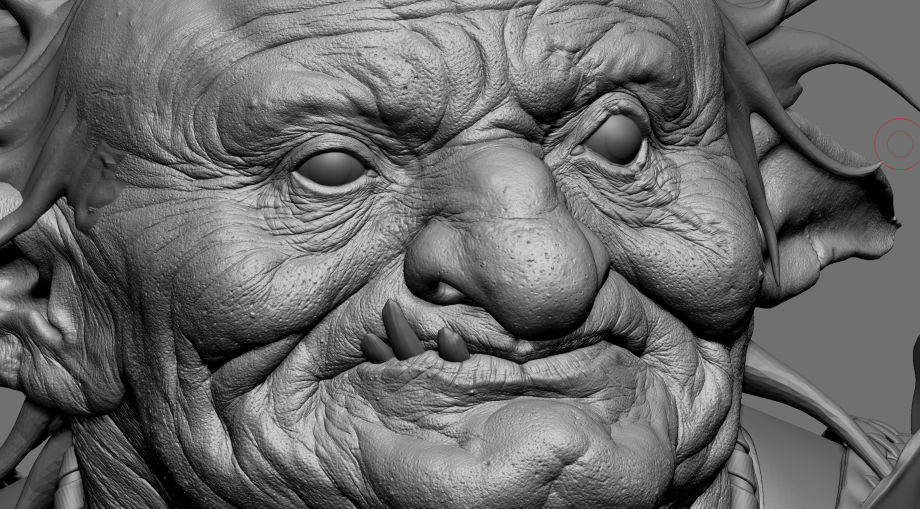 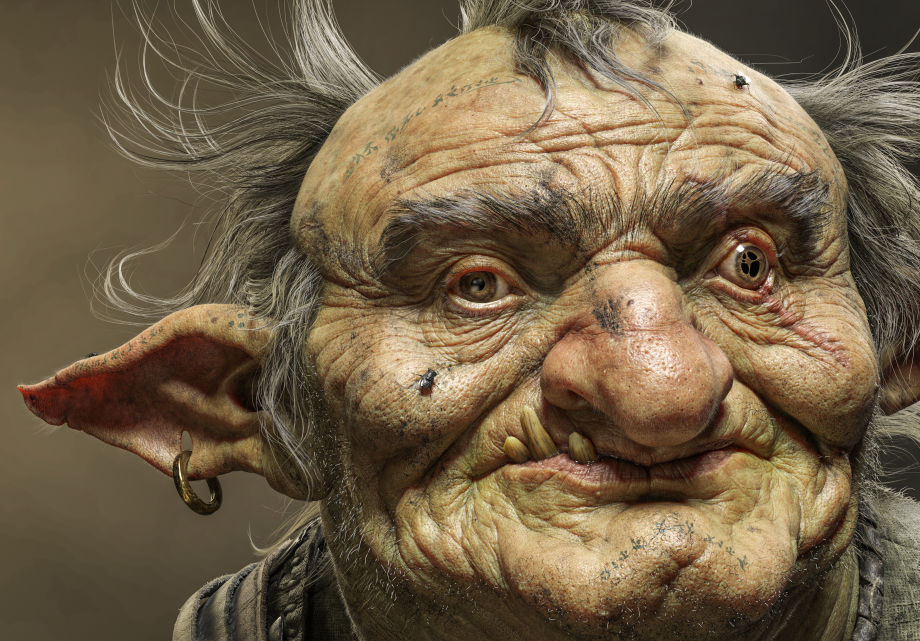 I started with the jacket, then added shoulder, straps. During the blockout phase, I tried to make his armor look as complex as possible; the refs I used are even more detailed than my final piece. I also tried to make it look cool but not that well-designed, because I thought his armor must've been done roughly and for battle purposes, not for a fashion week.

For belts, I used a cylinder primitive, then deleted the unnecessary parts and edited it with ZModeler. Before sculpting, topology should have square polygons for the best resolution with an optimal poly count.

For the shoulder part, I made rough forms of the armor with a sphere, then extracted the shape for final mesh and ZRemeshed it.

The necklace string has 2 layers of leather, a base leather rope and a spiral leather made with a spring primitive in 3ds Max. Perhaps, for a more complex look, I could have made 3 leather layers. On top of that, I added metal rings, torn ropes and teeth, of course.

For detailing, I used one of those big 16:9 4k photo textures, - I didn't even edit it, just uploaded into ZBrush, cranked up the blur parameter to make it less noisy, turned on the Surface Details mode and started working with it. I’m a simple man, I see a texture, I load it.

Speaking of the outfit in general, I think the most challenging part was to make an interesting belts system, - it had to be complex and not just with belts for the sake of belts; everything had to be in its place and have a function to bring visual believability. 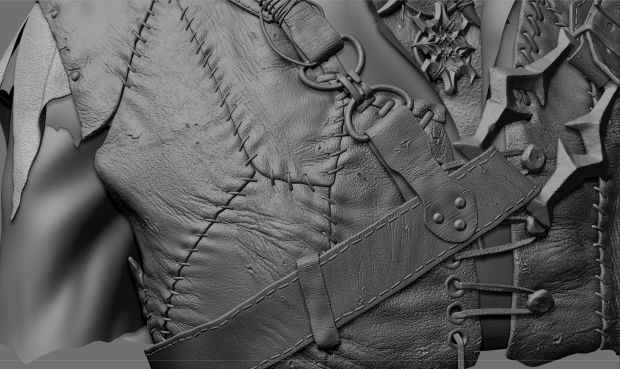 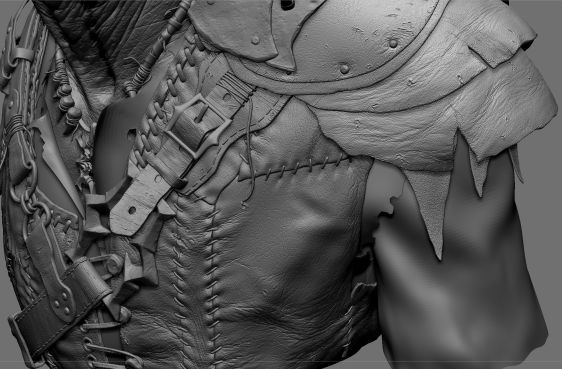 All parts use HD Geometry, the total polycount should be around 500mil, the head has 200mil.

Before this project, I baked all textures outside of ZBrush, but this time I decided to use a different approach. When I was happy with the geometry, I ZRemeshed it, then exported and made UVs in Unfold3d. After that, I imported meshes back to ZBrush, divided, and projected necessary details from the old mesh. From here, I started to work with HD Geometry. The head UVs are based on 3 UDIMs 8k each, by my calculations, it was enough for a close-up 4k shot. Then, I calculated that if the face is in a full 4k frame, it must have a texture size twice as large. I cut the meshes until they ceased to have tension points on the checker textures; checker’s squares must have the same size in all places. 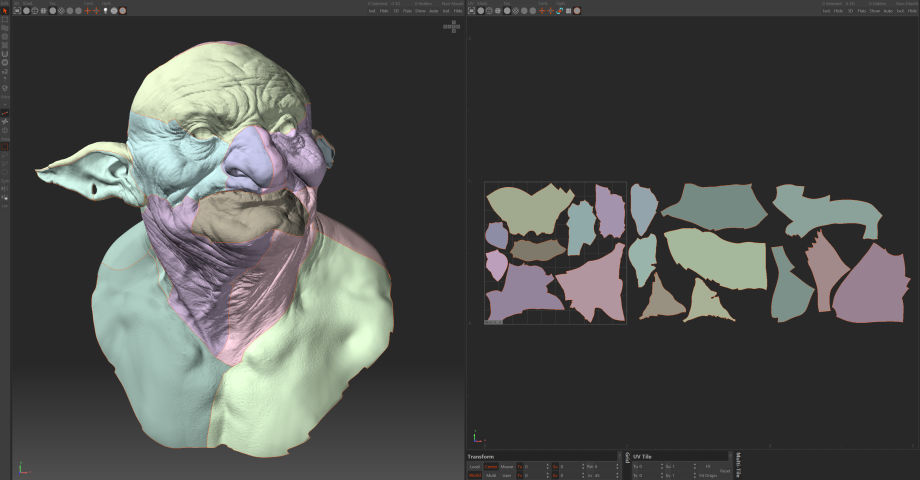 The first step was to make the form of the hair in the concept, then a rough mesh in ZBrush to see how it looked from different angles. The second step was to work with hair guides for which I used Ornatrix in 3ds Max. This part is the most exciting, I love the grooming process. I noticed that many artists don’t really care about this step, they just tweak hair guides a bit and then add modifiers, like clustering, curling, etc. But for me, this is the same process as building muscles and flesh in sculpting. This is the anatomy of hair. It means you must use refs and feel the hair shape, flow.

For a more realistic look, I use a couple of passes, with the first pass for pretty soft shaped hair and the second for the sticking hair (plus it can use a different color, for example white).

Also, one of the most important things in hair is color variation, some of them are brighter, roots and tips have different colors, etc. 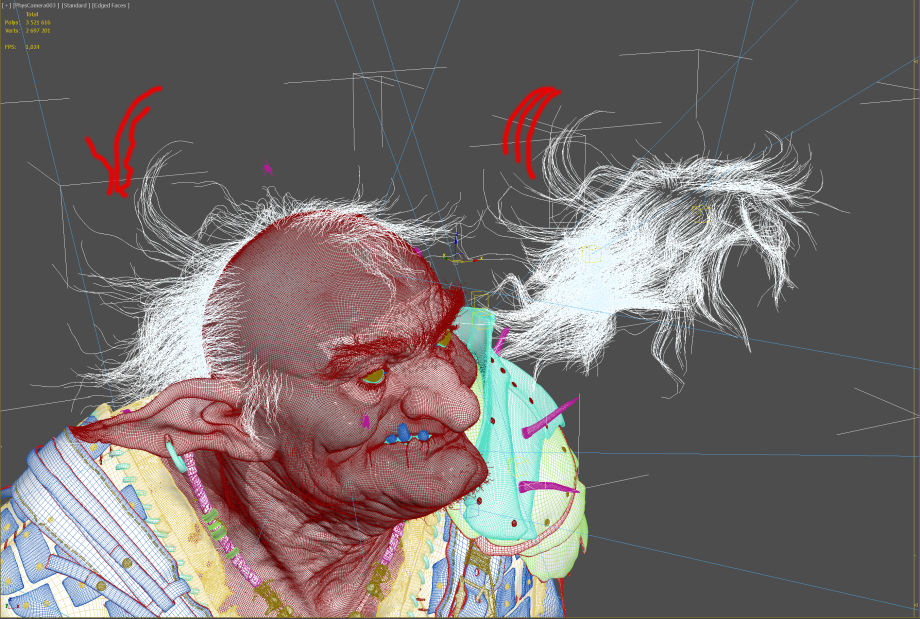 I used polypaint in ZBrush for everything except metal; for metal, I baked cavity map only. On the head, there are just base colors and a few spots. Later in Substance, I added more pigmentation dots, color tweak filters, tattoos, and a roughness map. So the base was done in ZBrush, the final touches - in Substance.

For the metal texture, I have a pretty simple workflow. I used a metal smart material from SP, tweaked it and added what I needed until I was happy with the result. Of course, I used references to get the right look. The most part of the metal texture is what I sculpted on it, by adding details with alphas straight from the photo textures, as said before.

The shiny spots near the teeth are meshes of drool with bubbles. I was checking my work one day and realized that something was missing, something between the teeth and lips. Then boom! - the drool, that’s what I needed to add there.

Before Substance Painter, I used Mari for textures, but not for long. At one point, I realized that I gotta learn SP because this soft is necessary for the current gamedev pipeline and I can’t continue to ignore it. I moved much further in SP and texturing itself after working for Blizzard, gotta say thanks for the tips to the team I worked with. I’m happy that now I can make really good textures. 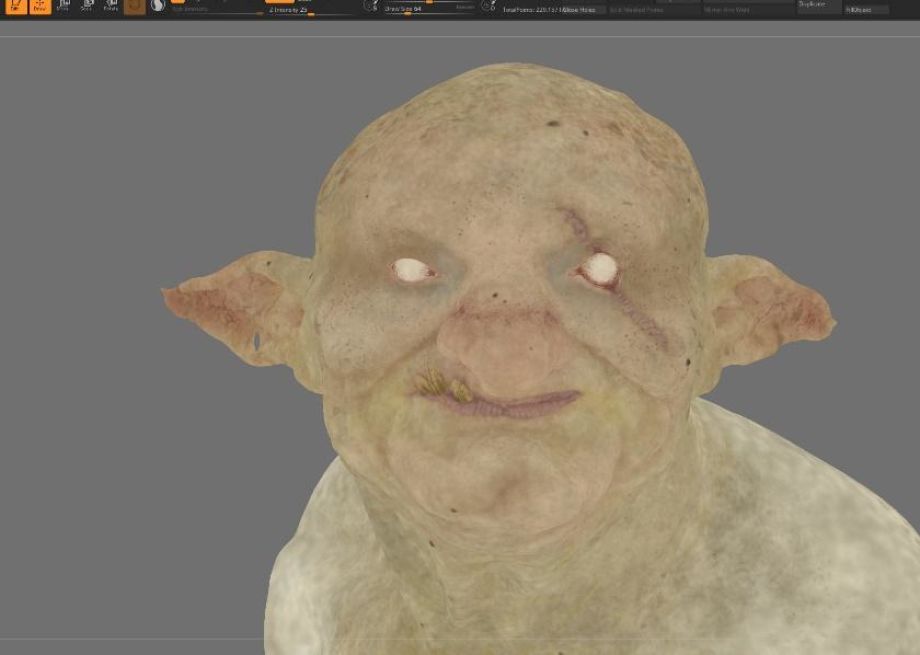 Arnold was a new renderer for me. I learned it through official documentation, a couple of tutorials on YouTube, and annoying questions addressed to big artists in DM on Facebook.

For the main render, I decided to imitate lighting from old classic paintings, it always hits me how awesome and smooth it makes the whole scene. I also used this slightly brown palette because it creates a nice feeling of unity between the environment and character. 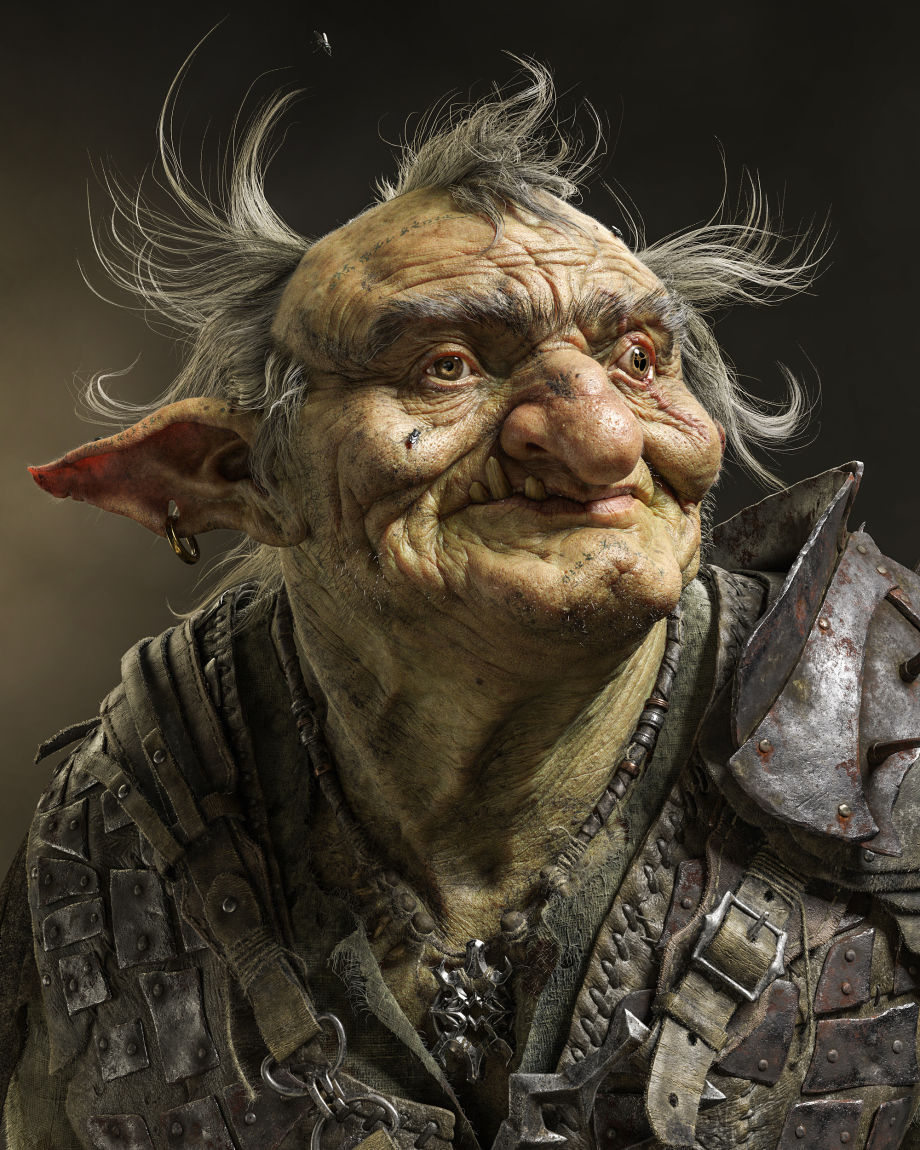 Actually, it doesn't matter how complex your work is, the rules for good lighting are the same. I think it is best when you can set up good lighting with 1 source, emphasizing all the details and showing what the viewer needs to see. I use the basic rules of the studio lighting, nothing new.

In the case of this work, I used 9 sources, but most of the job is done by one core light and a rim light. The rest of the lights are there just for help. Here's the lighting setup shown inside the 3ds Max scene: 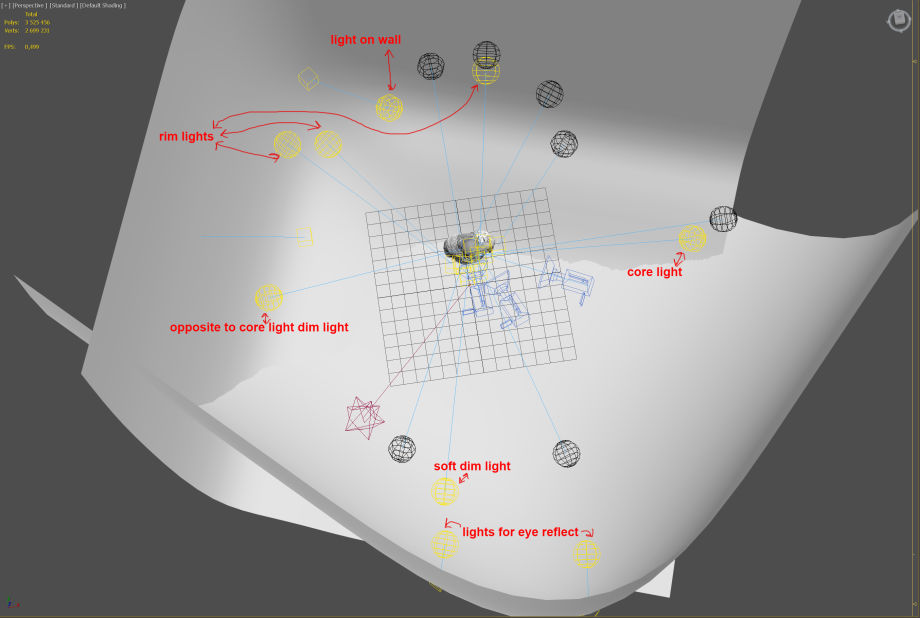