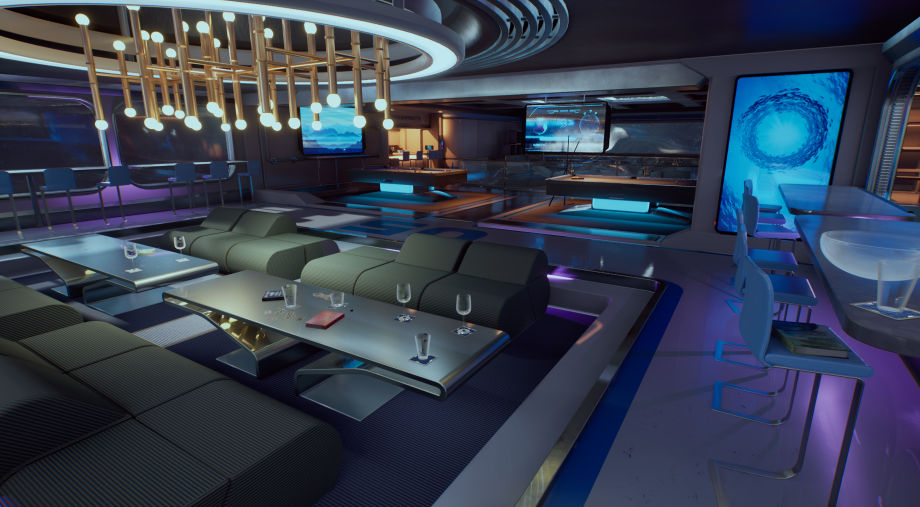 Since the last time we talked, I joined the very talented team at Cold Iron studios and have been working on a game in the Aliens franchise. At work, I have been busy working as an environment artist. In my free time, I like to keep my skills sharp by working on environments and props and also working on designing my own scenes. Design for the longest time has been a skill set that I considered myself weak in, but the more environments I design and create the better I feel that I am getting at it. 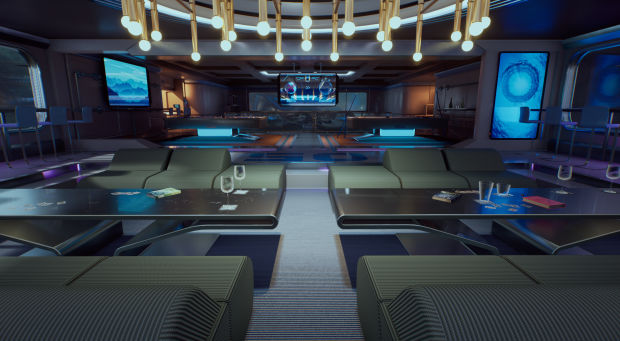 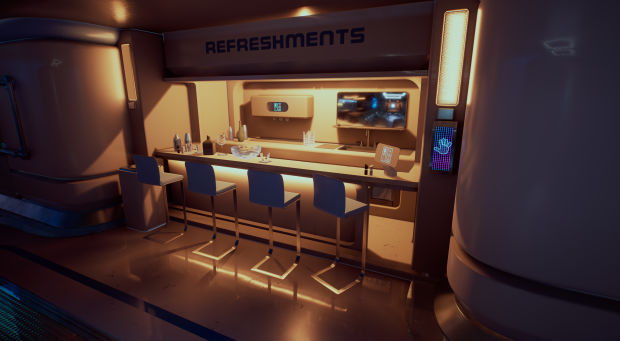 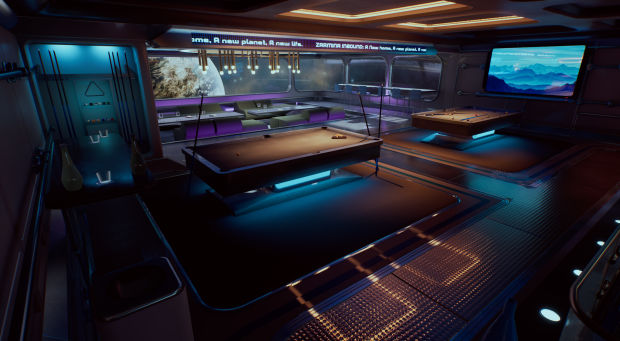 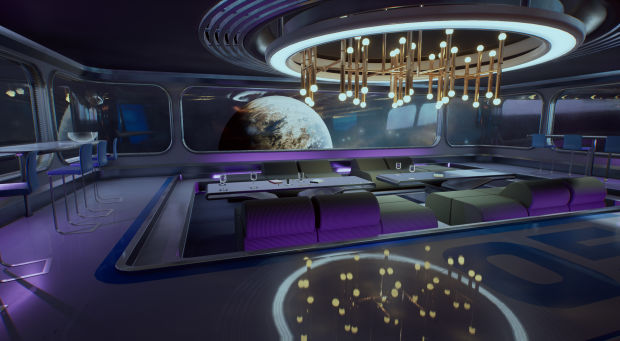 The idea for this environment stemmed from my love for Sci-Fi movies and games as well as my love for space and astronomy. I have always been extremely intrigued by the idea of “generation ships” – that is ships that are created for the sole purpose of housing humans for multiple generations with the goal of reaching a new far away planet. Ever since I was in school I have always dreamed of creating a project that took place on a generation ship as it made its final approach to the new home planet.

Having the story pretty firmly planted in my mind, I needed an aesthetic to wrap it around. Some key inspirations here are the movie Oblivion and the game series Mass Effect. Two things that I absolutely adore. I created a mood board with references and stuck pretty close to that aesthetic: smooth round corners and a sleek overall design feel. No sharp corners and no typical sci-fi 45-degree angles. Basic rules, but absolutely key to creating an aesthetic. Those were my artistic goals. 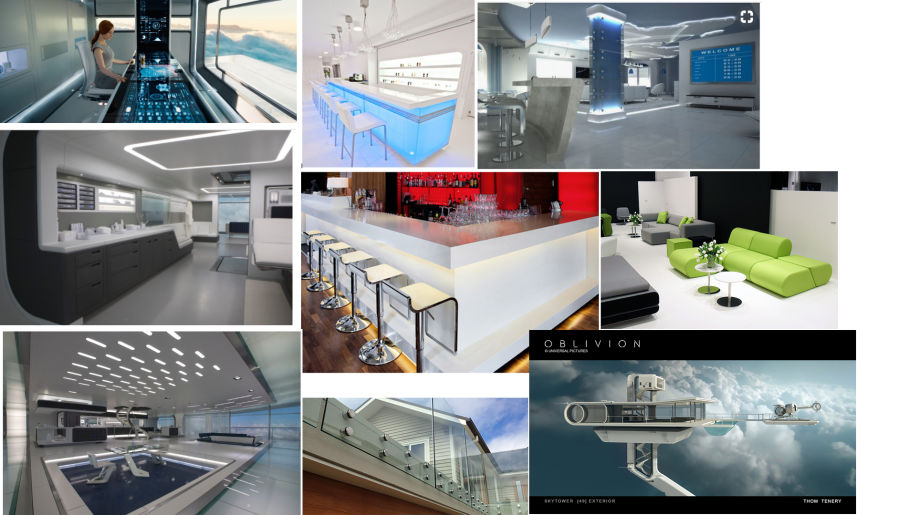 As far as technical goals are concerned, I knew I wanted to build this scene non-traditionally. The vast majority of objects in my scene have face-weighted normals to give the meshes almost a pseudo high poly look and the vast majority do not have unique textures but tileable materials. The tool that I used for most of my face weighting work in Maya is called bnormal.

This scene is semi-modular: there are certainly several modular pieces but also one-off pieces, too. But it didn’t start that way. The scene looked very different early on and was built almost entirely out of large unique meshes. As I started to iterate, and iterate, and iterate on the design, I decided that I wanted to move away from canned large chunks to smaller modular pieces. 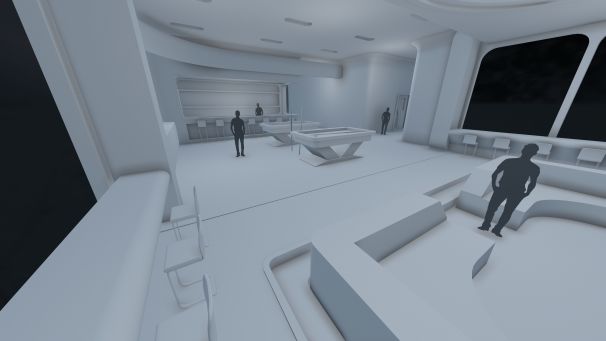 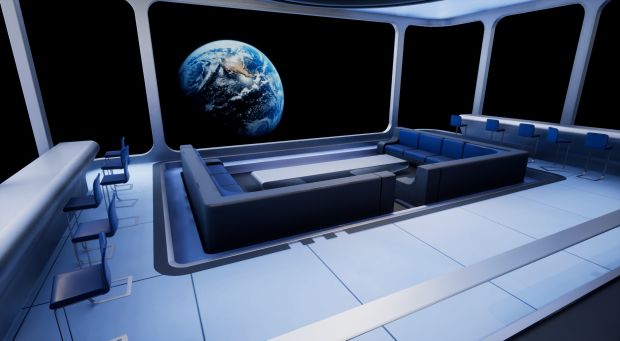 As you can tell, I did a lot of design revision on this piece. I started with very tall ceilings and a particular layout, but over time the ceilings came down and I fixed a lot of issues with proportions that I faced. In essence, I re-worked this project about 3 times pretty much completely, but I think the time that I took to iterate really paid off as I am pleased with where the proportions and design landed.

If I were to advise on creating these pieces, the most important thing, in my opinion, is references! Block out your chunks based on some sort of gathered reference, make sure that they tile left to right (and sometimes up and down), and also make sure not to forget your corner pieces! Always do testing in the game to make sure your pieces make sense and never be afraid to re-work and iterate on designs that aren’t working so well.

As I mentioned previously, I built this scene somewhat non-traditionally. I focused on creating really solid meshes and threw tileable textures on them. Very early on, I created a master shader that would have all of the bells and whistles necessary for making a material look good. 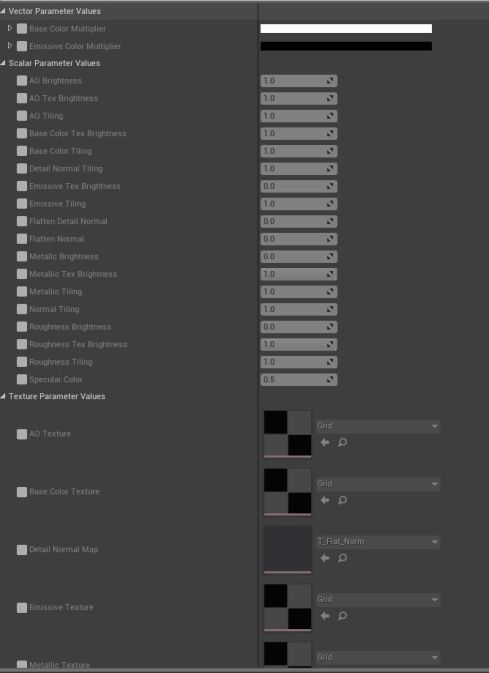 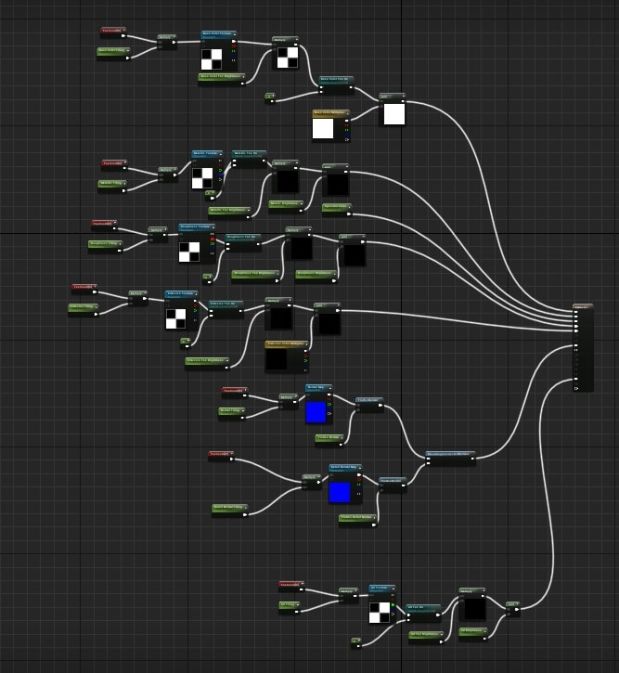 Around 80% of the scene is using a material instance from this master shader. Glass has its own master shader as well as lights. I think, working with these master shaders sped up my workflow exponentially because very often I was able to prototype by creating a new material instance, tweaking some values, and getting it on the mesh right away. Later on, if I decided the material didn’t have enough definition, I could very easily add a normal map, detail normal, roughness map, etc. and also blend between the values I already had in the shader. I could have gotten a similar result by giving each asset a one-off texture but that would have hugely increased the number of textures per scene. It’s a difference of dozens and dozens of textures.

When it came to lighting, I chose NOT to draw inspiration from the recently stated references and go for an urban lounge lighting instead. A lot of these setups have stark neon blues, oranges, and violets. 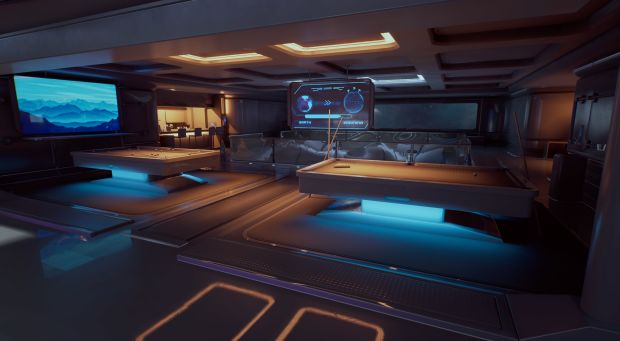 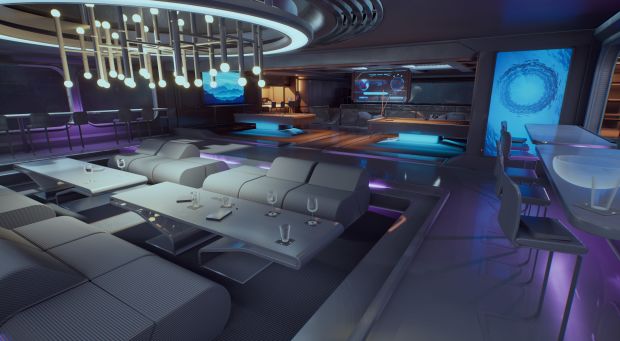 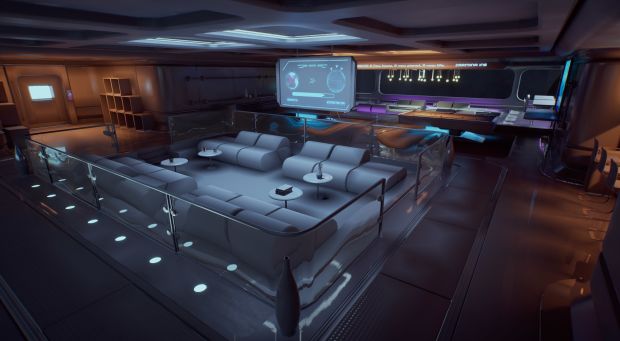 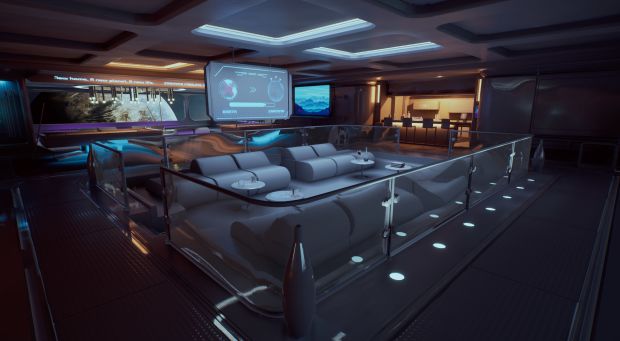 For my lighting setup, I borrowed a lot from artists like Koola and Brian Leluex, two extremely talented lighting artists. The lighting is fully baked with some dynamic lights for emphasis. I took a lot of cues and tricks from lighting for ArchViz as I was trying to fuse together Game Art and ArchViz here. Most of the lights in the scene are stationary lights. All of the light that is coming through the windows is going through lightmass portals to help with the direct and indirect shading. Key lights that are stationary (like the overhead lights) are set to stationary and have lightmass portals as well. There are a few less essential dynamic lights set to a very low intensity – I didn’t quite care if they contributed to Indirect lighting. All of the colors were hand picked by eye as I am personally not a huge fan of using temperature to nail the color. 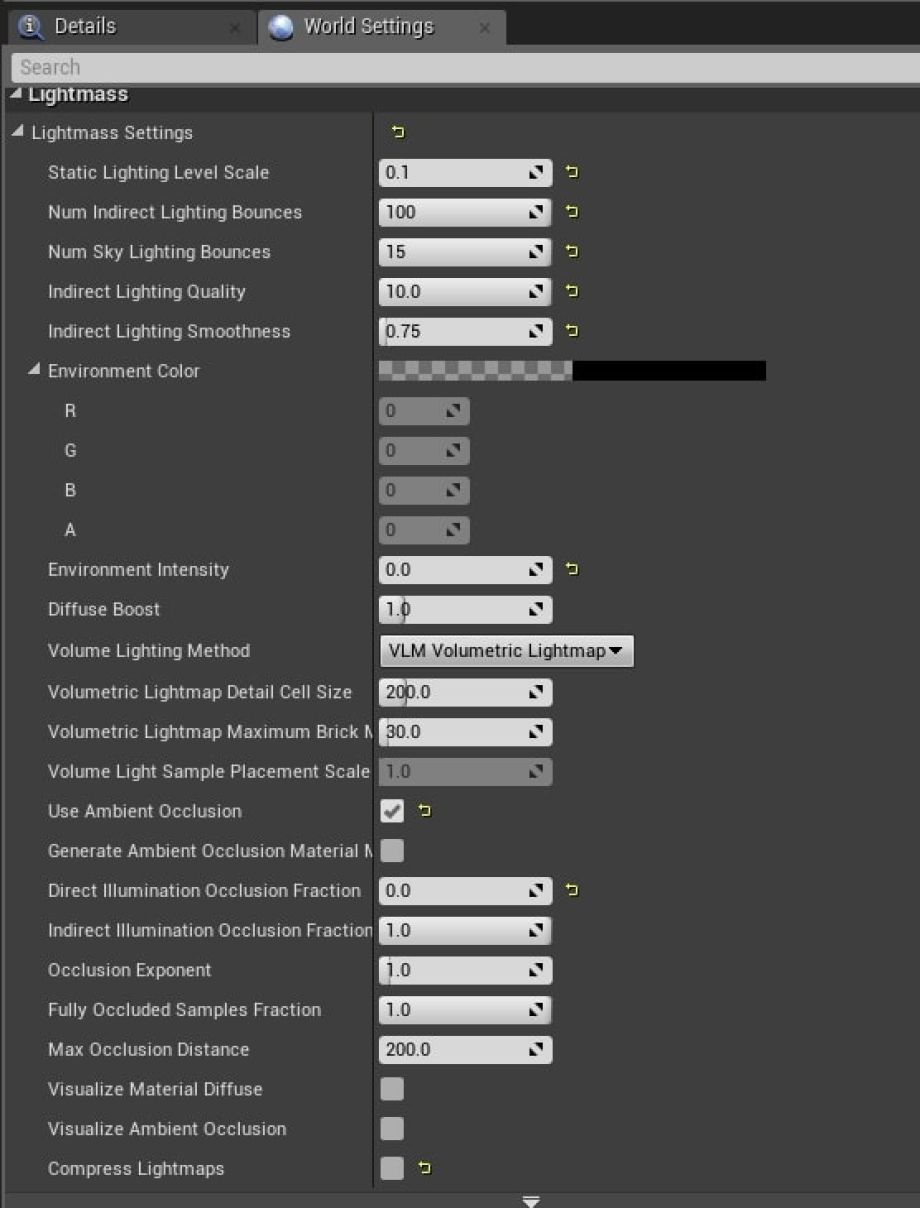 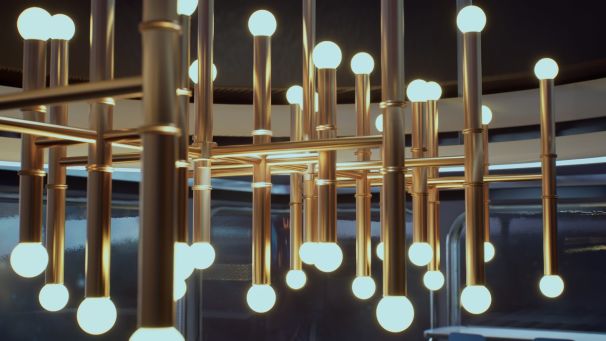 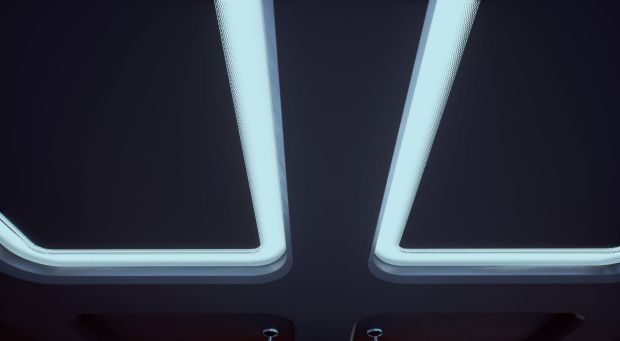 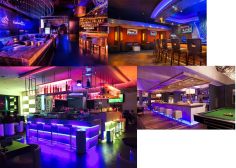 The glass facing the planet is actually one mesh, the whole side is a bit less modular. The glass opposite to it is built directly into the modular pieces. Balancing what you want the glass to do can be a very delicate process. The three most important things to nail for good glass are: 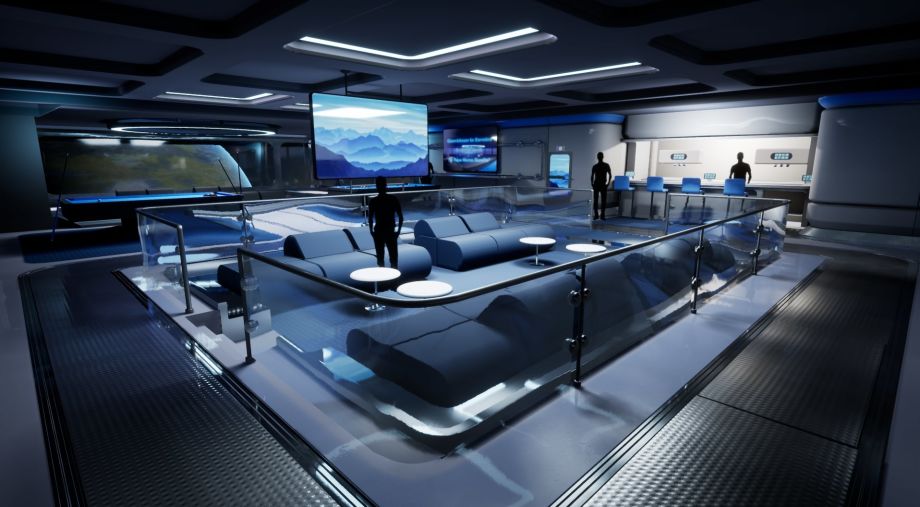 For the skydome, I used Spacescape by Alex Peterson, an AWESOME space skybox creation tool. There are tutorials out there that go through the process of creating a skybox from scratch with Spacescape all the way to importing and setting up the skysphere for UE4. Here’s the tutorial I used:

I should mention, however, that after I checked the tutorial I created my own skybox from scratch. And here’s the tutorial I used to get my Spacescape result into UE4:

If you found this article interesting, below we are listing a few related Unity Store Assets that may be useful for you: