Hello, my name is Brock Norfleet. I am 25 years old and I currently work as a designer for Universal Creative in the themed entertainment industry in Orlando, Florida. I've had the pleasure to contribute to various projects such as Super Nintendo World, Hagrid's Magical Creature Motorbike Adventure, and Transformers Metrobase.

At Universal, my responsibilities include creating models and sculptures for printing and fabrication, concept models for attractions and lands, and models for final media.

I've been passionate about fine arts and video games since I was young. Environment art and game development felt like a good fit for me, as it was a natural progression to things I already enjoyed. I was fortunate enough to attend college at the University of Central Florida which is close to the major theme park hub in Orlando. Through a course held by UCF, I was able to start an internship with Universal Creative in early 2017. Shortly after that, I accepted a full-time position later that year and then finally graduated with my BFA in 2019. 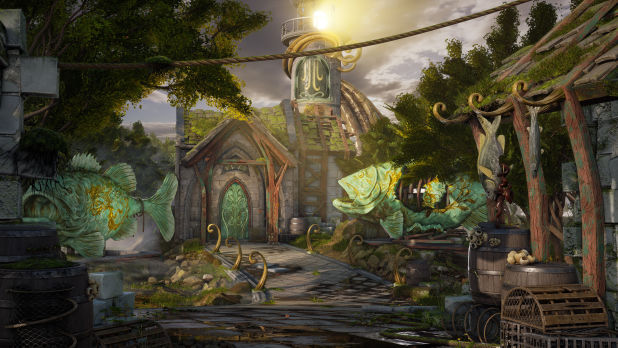 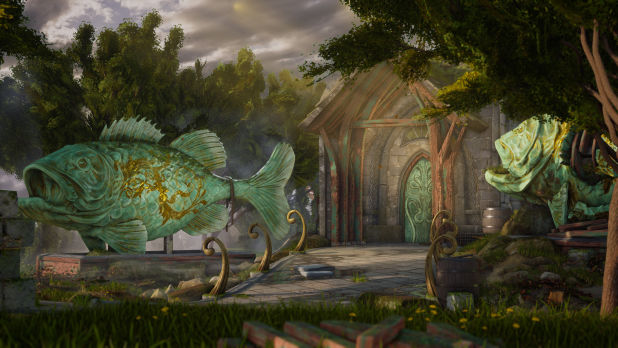 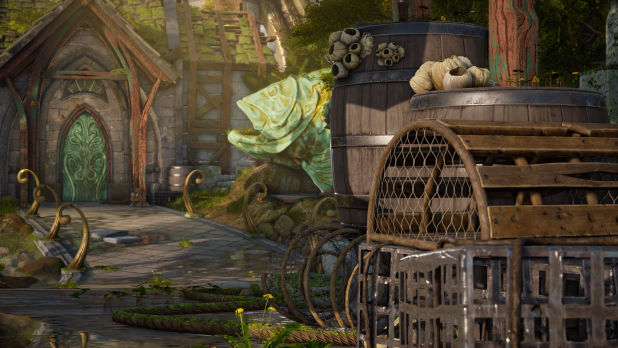 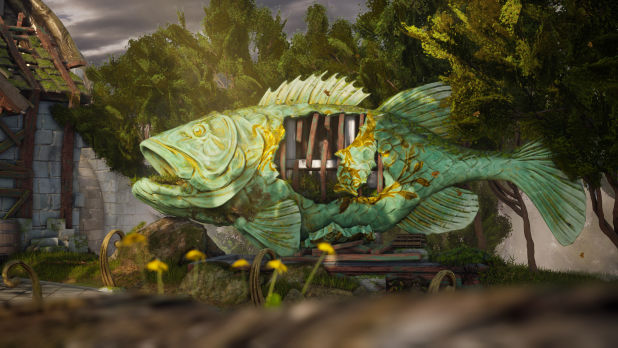 The story here is about a fishing village losing passion for fishing but it more symbolically represents someone losing enthusiasm for life, dreams, and projects that they were once passionate and excited about.

Ironically, the inspiration for this project was from my own experience when I felt a bit caught up with life and would start a project, lose motivation, and stop. Seriously, I have a hard drive full of unfinished works. This project was actually me trying to visualize those feelings. My advice, if you find yourself feeling unmotivated or stagnant, is to fall back on why you started art in the first place. For me, it's about enjoying the process and doing something with meaning.

References were from various Art Nouveau architecture as well as various lighthouses and fishing villages. I really enjoy sculpting and wanted to do something architectural but still with that organic sculptural feel. Art Nouveau really spoke to me in that respect. 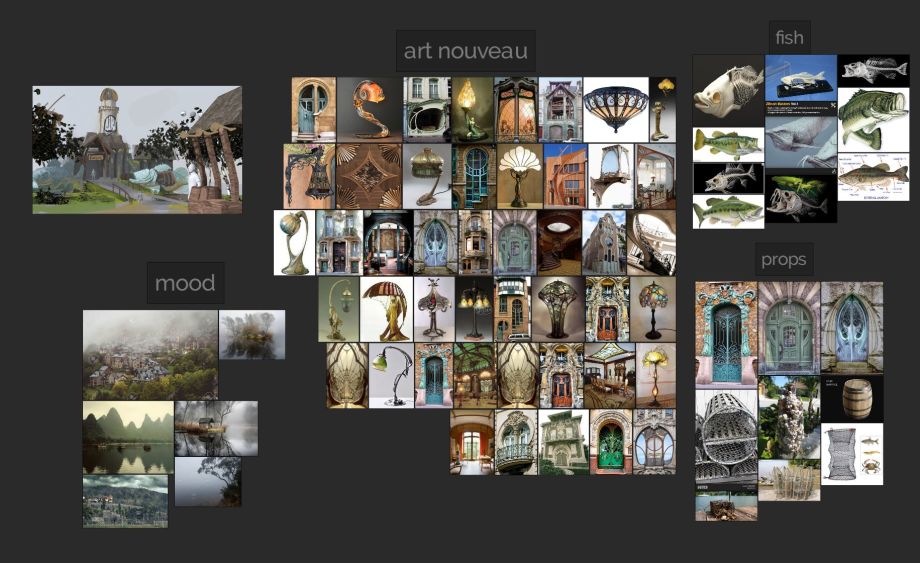 The blockout was done in Maya. First and foremost, the main goal was to establish an interesting camera and composition. I'm a big fan of the Great British Baking Show on Netflix, and I compare the blockout stage to baking a cake – you want to get a good foundation before adding the icing. If it doesn't work from the beginning no amount of icing will help. 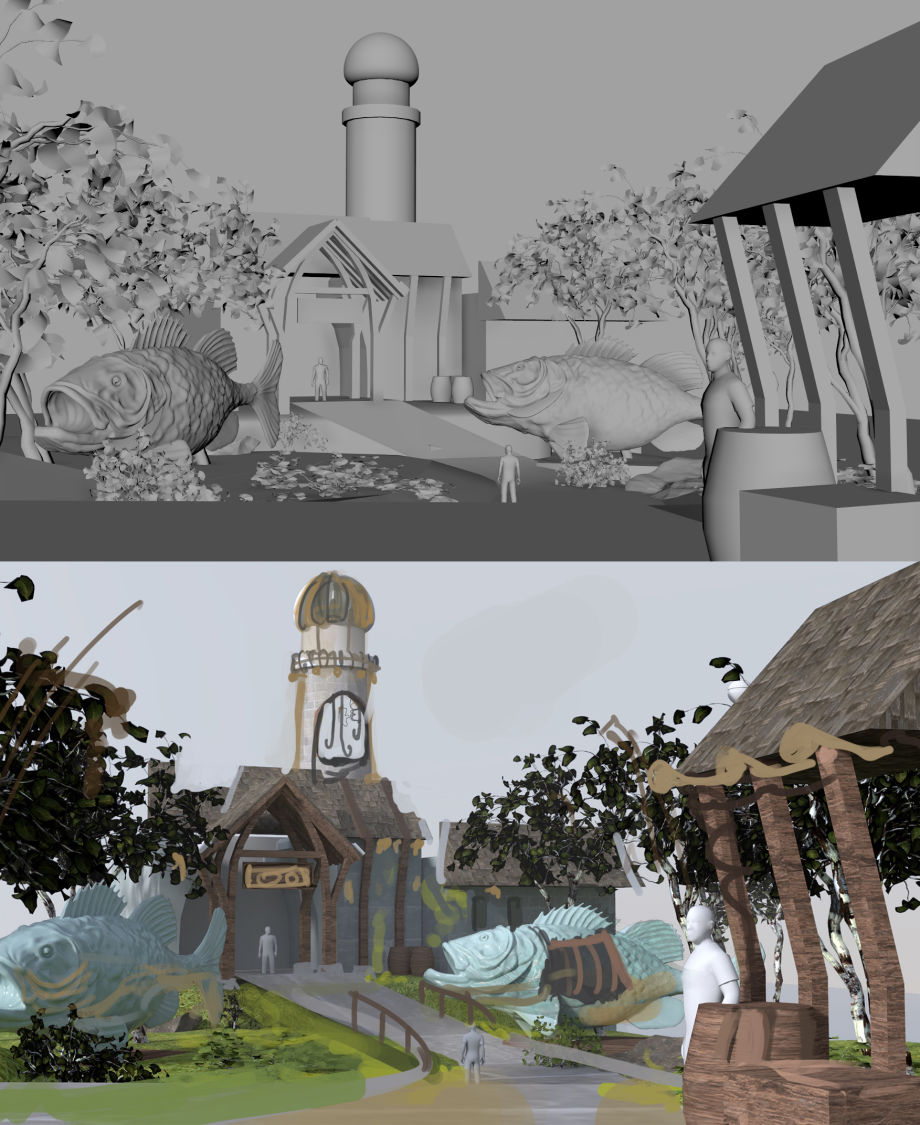 After the blockout, I created a really rough paint over in Photoshop to establish general colors and mood. Then I began sculpting the hero props and adding quick textures to test inside of UE4. My advice is to build the scene up slowly starting with the elements that take up the most screen percentage or are most important for the story. In my case, starting with the large fish, the brick building, and the lighthouse was most important. Establishing a focal point early is essential.

For this project, I wanted to explore the ZBrush to Substance workflow for creating tileable materials. I started with a high poly ZBrush sculpt, then baked it onto a plane in Substance Painter. Baking in Substance Painter rather than Substance Designer allowed me to hand paint some details in the maps instead of going for a fully procedural approach. It also allowed me to use the vast library of smart materials and smart masks to get the exact look I wanted. Most of the tileables were created with this workflow.

Creating the tileable texture in this way also made it easier to make smaller assemblies of broken walls, individual bricks, and roof tiles.

For the large structures such as the building and lighthouse, I used tileable textures and trim sheets on fairly primitive geometry. 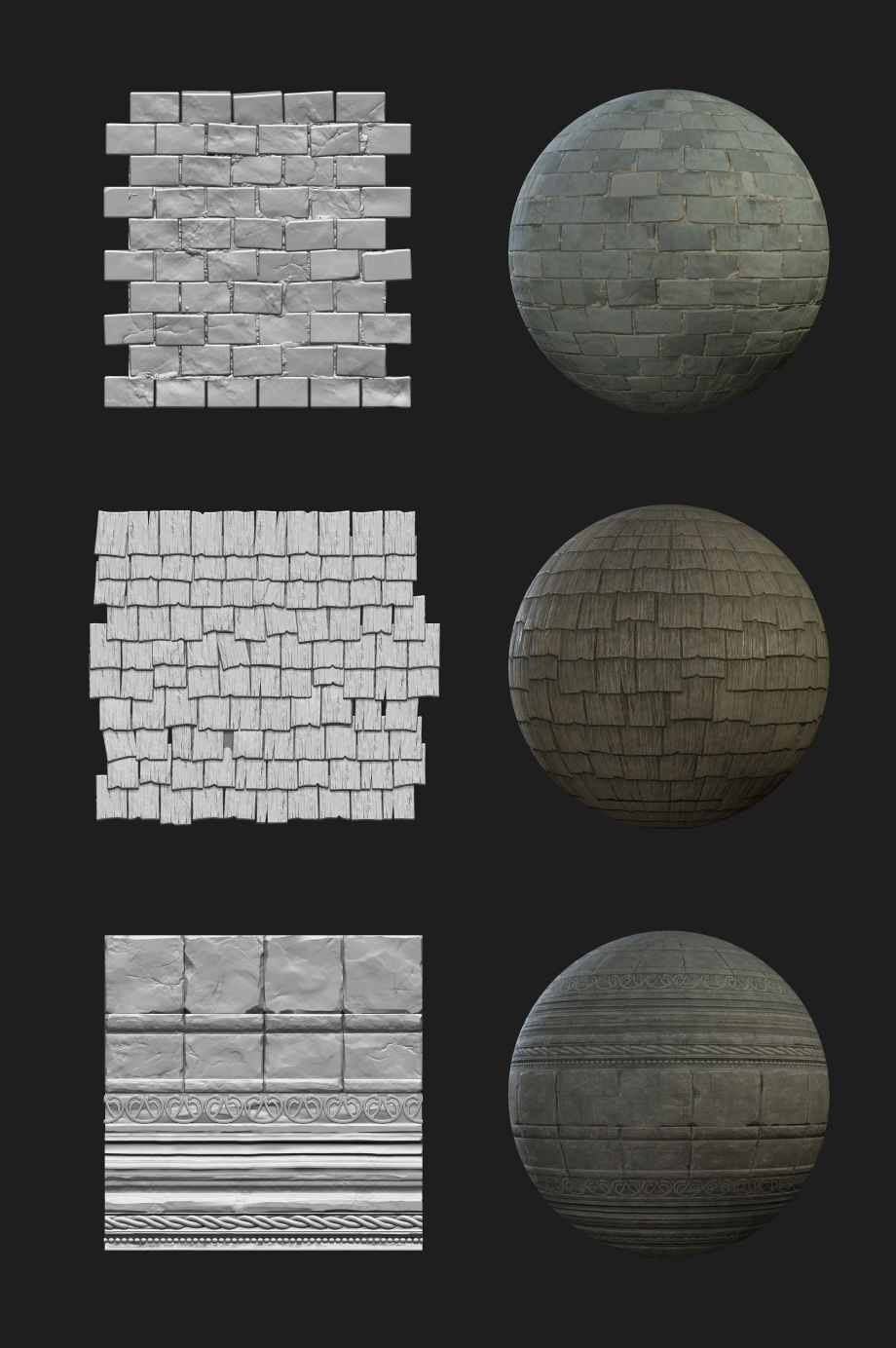 For the organic props, I used the highpoly to lowpoly workflow similar to creating the tileables. I first worked in ZBrush, then Maya for low poly creation, and then finally in Substance Painter for texturing. 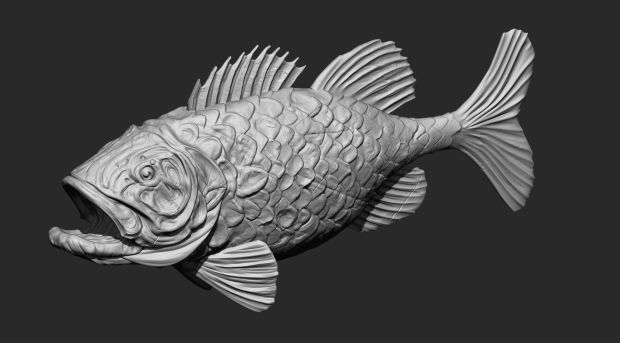 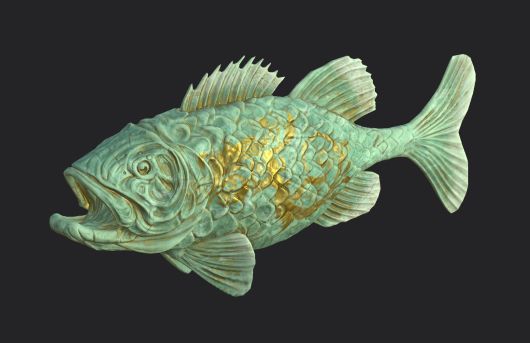 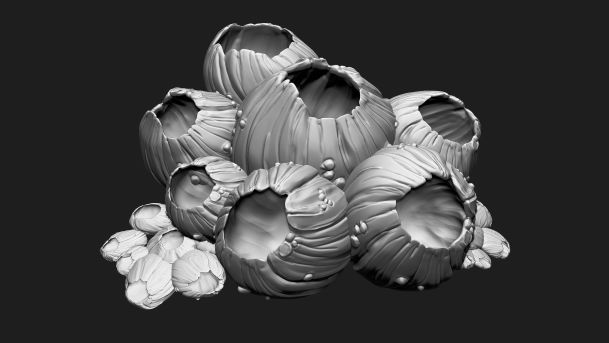 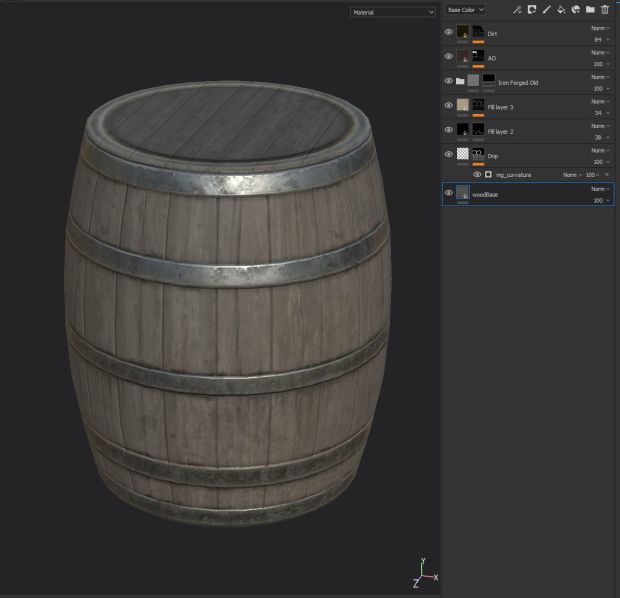 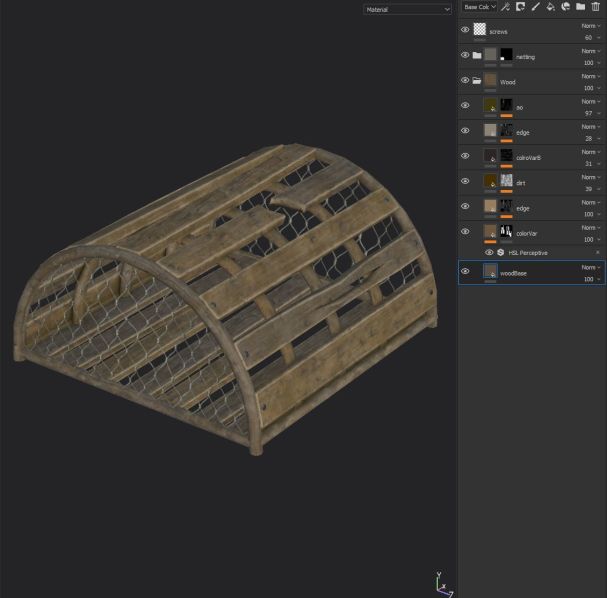 For this scene, I decided to use Quixel Megascans assets sparingly as I'm still learning the workflow for asset creation. I introduced the assets toward the end of production to add that extra bit of detail. I really prefer this approach, especially as someone who is still learning because it allows me to practice asset creation.

I used the dither node to blend the assets together. Small values between 2-10 really go a long way. It's subtle but it helps make things a bit more organic.

This is the first scene I used SpeedTree for. The whole scene uses one tree asset that I scattered in UE4 using the foliage tool. I mostly utilized the gravity slider in SpeedTree to get a solid windblown tree. 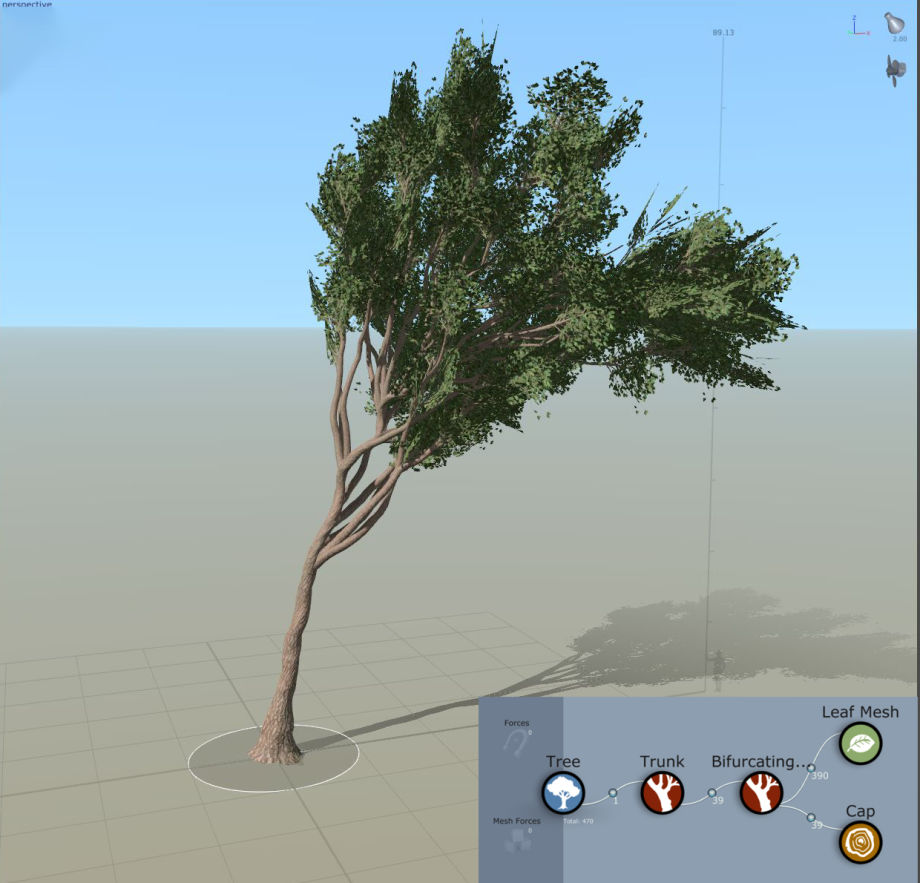 The first thing I do when lighting a scene is prep it. I remove all lighting from the scene, including post-process volumes, fog and skydomes. I disable auto exposure by going to Settings>Project Settings> Auto Exposure. I add a post-process volume, set it to unbound so that it fills the entire scene. I then clamp the exposure Min and Max settings to 1. When the scene is prepped, you're ready to start lighting!

The lighting was created by first establishing the sky light, atmospheric fog, and skydome texture. That gives the general ambiance and sets the mood for the shot. The skydome was created by using the Editor Sphere in the UE4 content folder and scaling it up to fill the world. I then created an unlit material that uses a single color texture piped into emissive. And finally, I added some tiling attributes to position the texture on the dome. 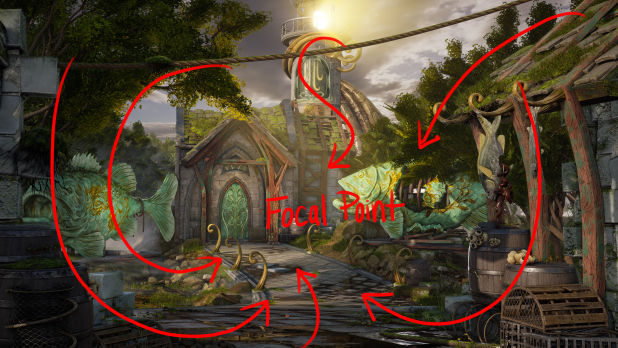 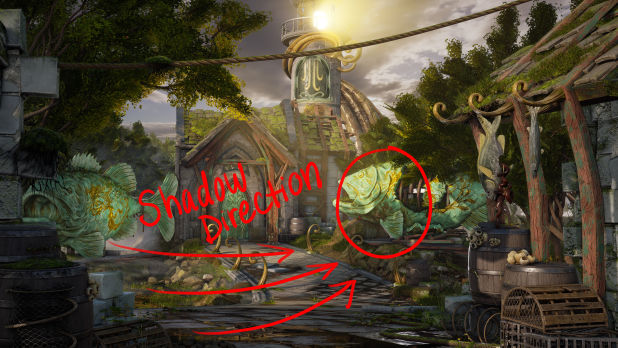 The next part is my favorite – “painting with light”. This involves adding various “fake lights” that reinforce the composition. These fake lights don't necessarily have to originate from a real-world object. This stage is all about using your artistic eye to highlight parts of the image. Various spot lights were used as traditional rim or fill lights to emphasize parts of the scene.

And lastly some final embellishment. I use fog cards to deemphasize areas and god rays as a big arrow, drawing your eye to the focal point. Fog can be a lovely tool to push things back in the scene.

A big thanks to my peers who gave feedback while I was working on this project. Showing off your work to people throughout the process and even right before you call it done will often give you that extra push to make the project really shine.

I think creating environments is like running a marathon. The biggest struggle is keeping focused and motivated. The biggest take away for this project is not technical, it's about perseverance, enjoying the process, and making art that is meaningful to you.