João Comassetto did a breakdown of his Red Menace character, shared his approach to hair and female anatomy modeling for 3D printing in ZBrush, and revealed the details of polypaint process. 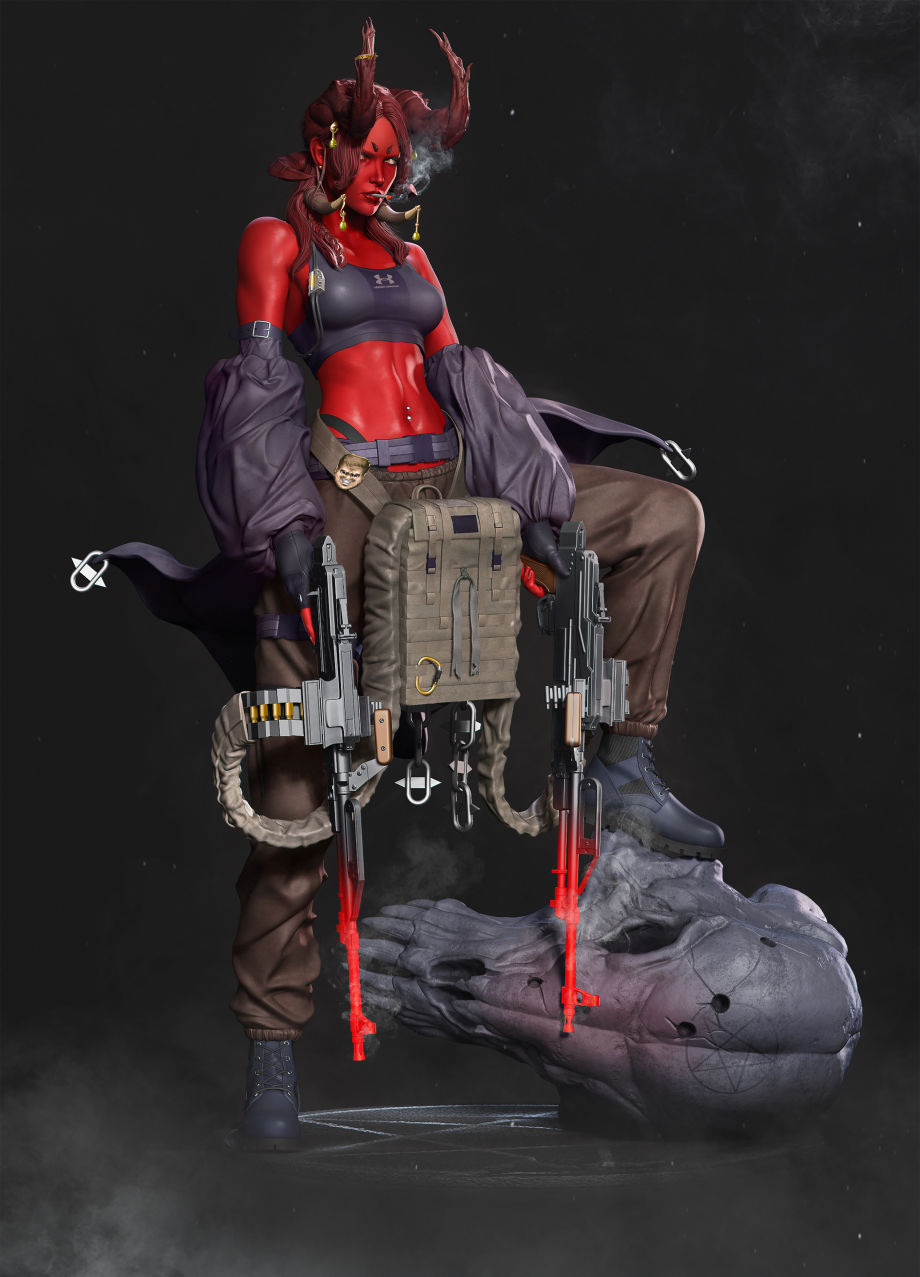 Hi! My name is João Comassetto, and I'm a 23-year-old character artist from Brazil. I've known 3D for a few years but only this year that I took it seriously. I was always in contact with anime and Asian culture when I was a child, because of that, I knew that I wanted to do something with art in the future. The thing that had the most impact on my artistic view was MMORPG's, I always loved the aesthetics of it, that's when my interest in character art started to grow. As much as I love 2D, I wanted to do something more tangible, that's where I knew that I wanted to do something related to 3D. Most of the things I learned were from Youtube and some online tutorials, we have a lot of information out there, and I think now it is the perfect time to learn! 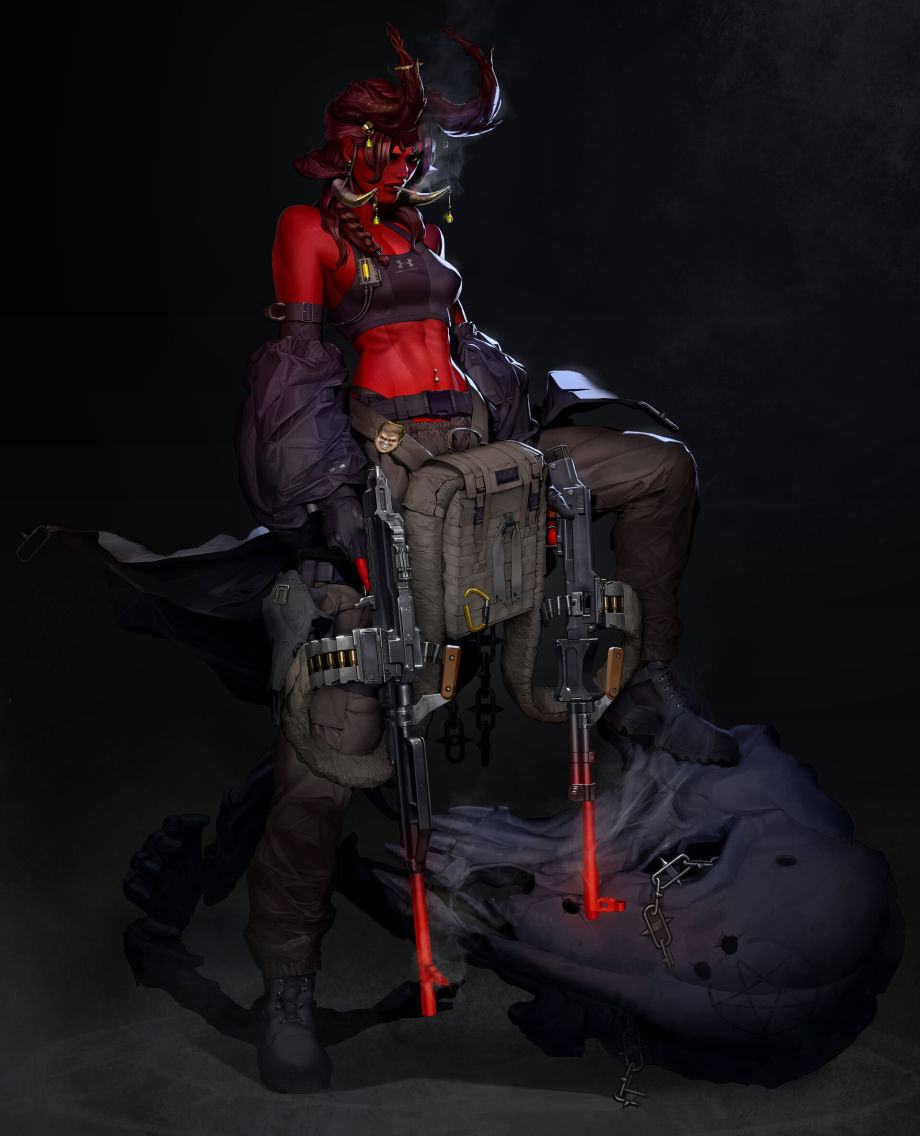 by Park Jin Kwang
This project was made during Alvaro Ribeiro's collectibles course, and since this is a personal project, I wanted to practice as much as I could, and for that, I needed to find a good concept that involved anatomy, cloth, and hard-surface. That's when I stumbled upon this great Korean concept artist called Park Jin Kwang, the concept had everything I wanted!
Because I already had the concept, all I needed to do was search for real-life references. The face reminded me of Cara Delevigne, so I used her features as a starting base. 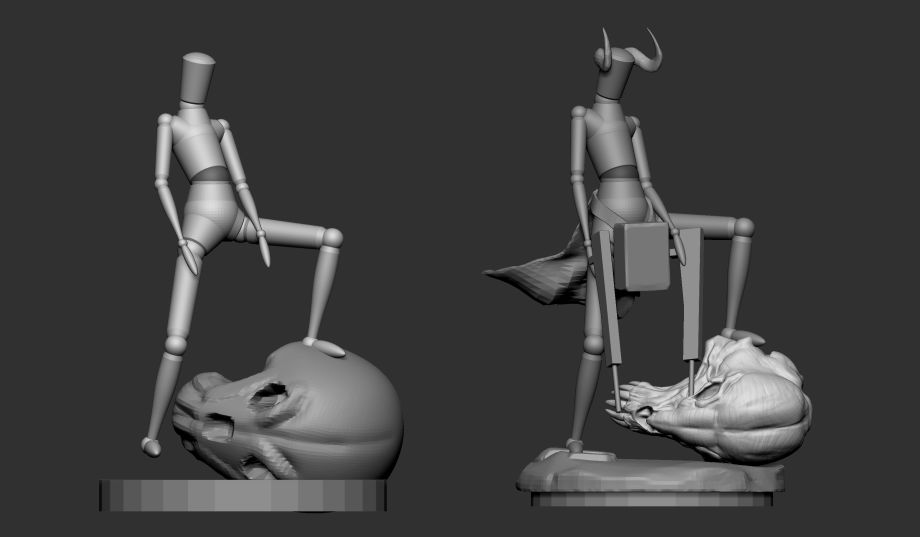 The first thing I did was use the ZBrush mannequin to get the feel of the pose. When I do poses, I tend to use the Contrapposto rule to make it more interesting. For me, one of the most important things about doing female anatomy is the shape and flow of the character, I tend to go for really long legs as well, that's something you see a lot in Korean concept art, giving the character a more powerful aesthetic view. 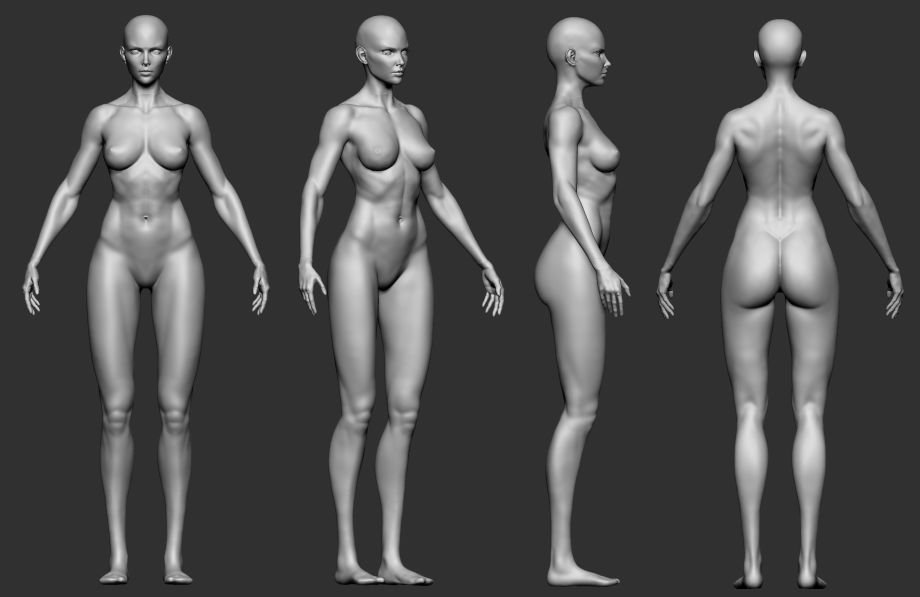 For the anatomy, I sculpted in an A pose. I started with a sphere and blocked out the shapes with dynamesh, here, the important thing is to have your main shapes and proportions first, so you have a base for when you start adding your clothes and accessories. The main brushes that I used are Clay, Dam Standard, Move, and Smooth.

The hand and the head were made with different substools, so I could use dynamesh with higher values without worrying about the entire body getting too heavy on topology, after the body was finished, I just zremeshed everything and projected the details back. Since this was made in mind that I wanted to 3D print the character, I didn't add details on the skin, for it to appear on the 3D print would have to be big, and this could ruin the feminine look that I was going for. For posing, I used the Transpose Master Plugin, here I used my first mannequin pose as a reference, after that, I just refined the parts that had deformed. You don't have to worry about the anatomy deforming if you have clothes on top of it, but I resculpted it just for practice. 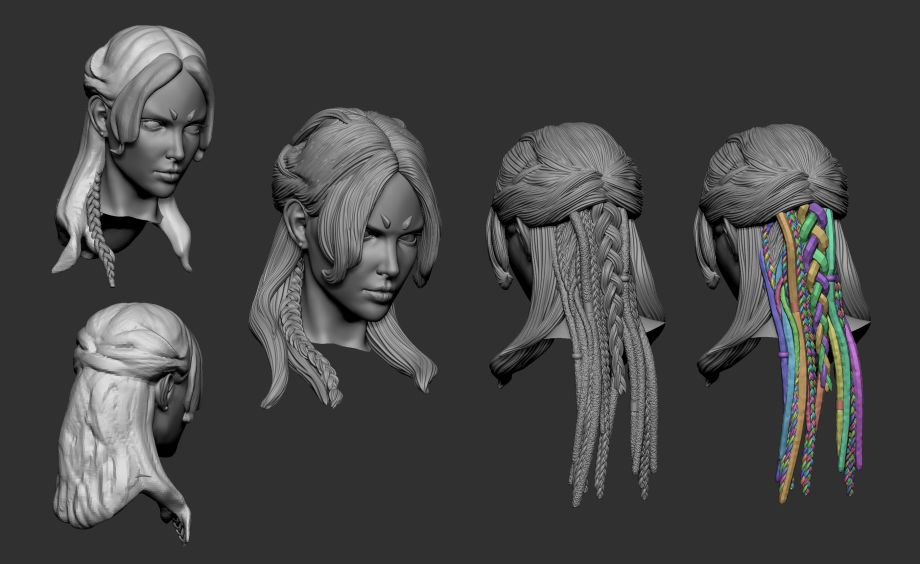 I started the hair with a sphere and just used Move and Clay Buildup brush to make the primary forms, after that, I used the brush SK_Carve (It's free on Sakaki Kaoru's Gumroad) to make every single hair strand. One tricky part was to make the hair interact with the horns, I had to look for references and understand the physics behind it. For the dreads, I used the Curve Tube brush and then added the standard noise.

There are no secrets behind the horns, I started with a sphere and just used the Move and Clay Buildup brushes to make the basic shape, after that I zremeshed and started to add details. 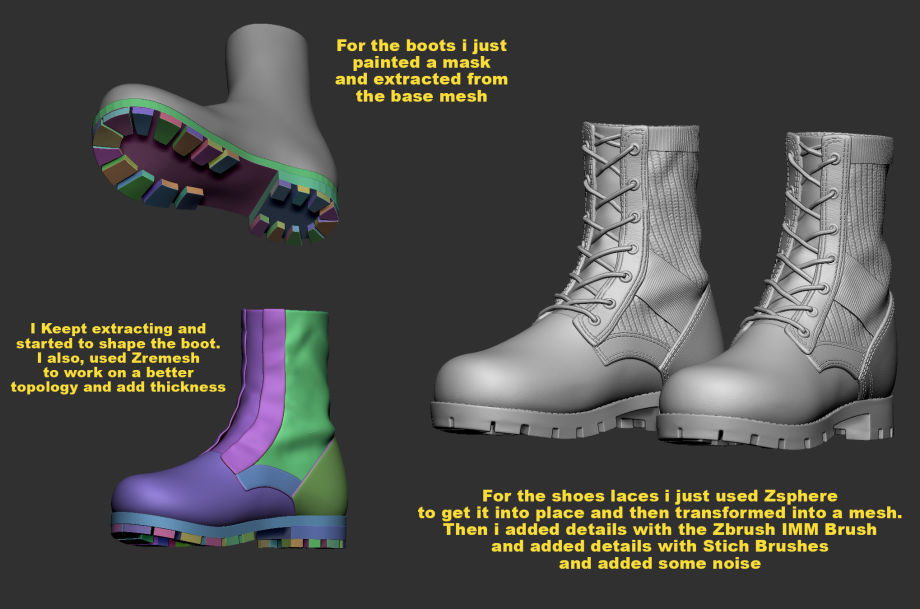 For the clothes, I knew that it would deform once I posed the character, so in the beginning, I only masked the model, extruded the mask, and then sculpted the overall shape of it. As for the parts that wouldn't deform such as the accessories, I took advantage of the symmetry and sculpted it in the A pose.
The folds were done with the Standard and Smooth brush, it was very tricky at first because I've never sculpted clothes before and it was really hard to find references for the sleeves. It's all about observation, you can sculpt anything if you have the right reference!
For the cape I started with a plane, used the Move brush to make the main forms, after that, I just added thickness and started to sculpt on top of it. Some capes are supposed to be thin, so if you are doing it for 3D print, one little tip is to add more thickness in the middle so you can have a more resistant piece and still give the illusion of a thinner piece.
The boot was made by just extracting parts from the feet, I used ZBrush IMM brushes as some stitches brushes as well.

The weapon was made with Zmodeler, I've never used it before, but I wanted to make this project entirely on ZBrush so I pushed myself to learn it. It was very tricky at first, but after a few minutes, I got the hang of it. For this, I used the Spotlight feature to be able to use a gun reference and model on top of it, I started with the main shapes of the gun and slowly started to add details, ZBrush has a Boolean feature that allows you to add holes into the model, I used that to make some complex shapes.

Since this project was made for 3D printing, I didn't care much about my topology, I was only careful to not go too high on my polygons so my ZBrush wouldn't lag. One little tip is to work on separated files, and when you finish your project, you just add the subtools together in the main file. 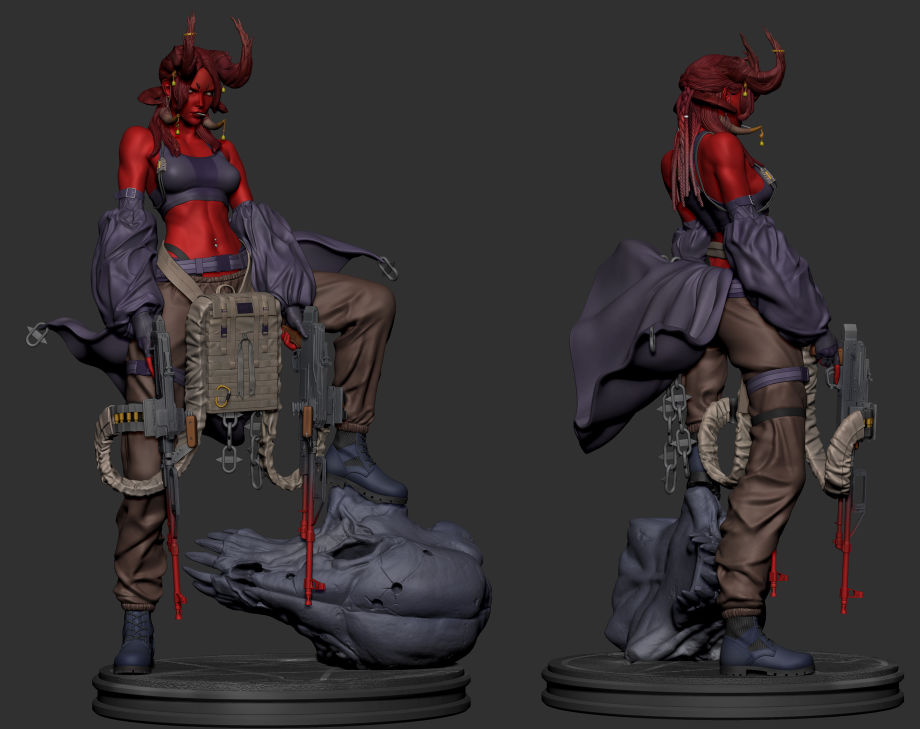 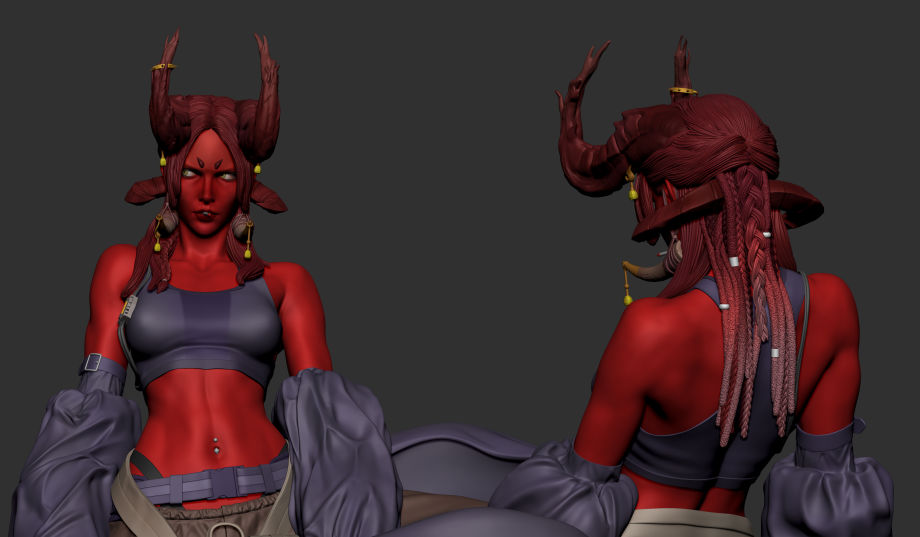 For polypaint, I just used the Standard brush with RGB on and the Basic Material, I didn't think much about it since I knew that I would composite later on Photoshop, so I just added some base colors and tried to add a little bit of variation. "The eyes are the windows of the soul" They are one of the most important things in a model. I used a real texture because I wanted it to have a real feel and convey real emotion.

The render is an important step. It is what will sell your project or make it look bad, I've seen a lot of amazing sculptures with bad rendering, so you have to be careful and take your time. For 3D printing, it is the reference that the painter will have when painting the model.
I wanted to give the same feeling as the concept, so I already had a reference on where I wanted to go.
I used BPR passes in ZBrush and then moved it to Photoshop to start compositing.
It's nice to have a variation of materials and lights so you can have more options to play with once you move to Photoshop.
In Photoshop, I tried to play with different opacity and the layer styles that it offers, I also used a lot of textures to give variation to the colors and materials.
Rafael Grassetti has a video on Youtube demonstrating this workflow!