Before we start I would like to thank 80 Level for the interview and fantastic chance to share my knowledge with their readers, Sergei Panin for valuable advice and priceless streams, and the Leoluch – Development Game Content discord channel for the warm atmosphere and like-minded people.

So, hello there! I’m Stanislav Vovchuk. I live in Tula, Russia, and I am a freelance environment artist looking for a full-time position.

My way into the world of Gamedev and Environment Art started not so long ago. My first prop was baked only last summer. Speaking about education, like many artists in Gamedev, I’m self-taught. It is important to note that nowadays, with the help of the internet, much can be achieved. My first tutorials were excellent Ultimate weapon tutorial and Mech Tutorial by Tim Bergholz, which gave me a common understanding of how everything works. It was a hard start, but that experience has helped me so far. Later I had been much inspired and my skills actively developed through the mentorship of Sergei Panin. 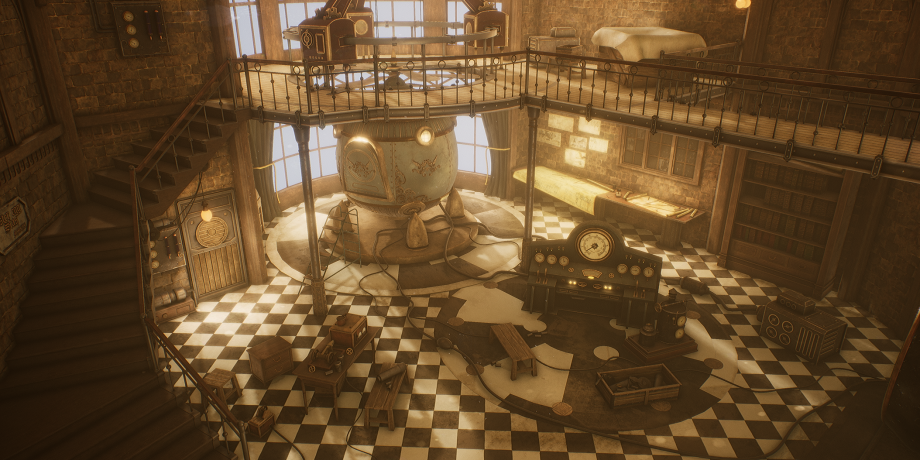 After finishing my previous scene, I was in search of inspiration and didn’t even know what it should be. However, I was confident that I wanted to make a challenge for myself  –  work with wood, steel, and stone. These were the materials I was afraid to work with. Also, I wanted to use some new tools, programs, and pipelines. So, the concept I found on Artstation was an ideal one for my goals. It was fairly detailed, so I didn’t need to spend too much time thinking about design.

Moreover, it caught my attention because of the light dynamics – sunny, warm and living. The light effects would be a real challenge. The combination of a science lab, steampunk vibe, technological stuff and some feeling of home comfort were a perfect story to tell. Well, in short, it was love at first sight.

As usual, everything starts with reference collecting. It’s beneficial – the more references, the better! Far too much has been said about this. 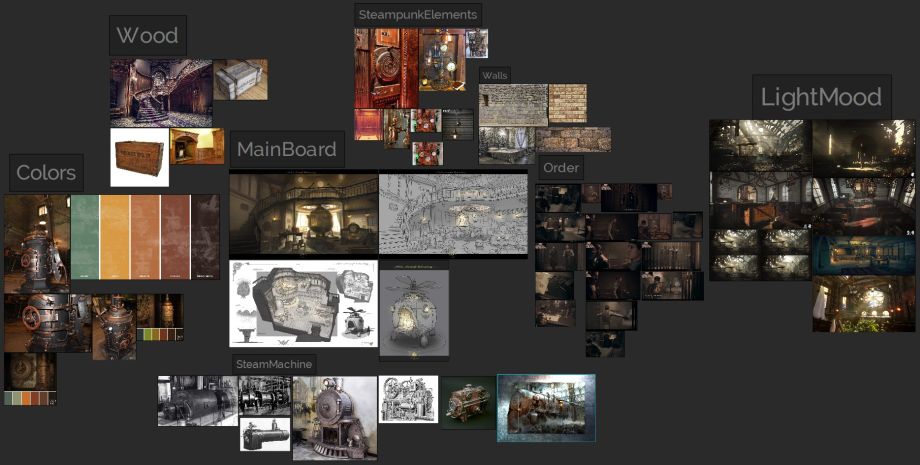 As I have already said, a considerable part of the work has been done in the concept, but I still had questions concerning the materials, the lighting and the color of the scene. That’s exactly what I kept in mind when I was collecting the references.

Next step is creating a blockout. This phase plays a significant role and impacts the following production. Be attentive so that you won’t have to cry over spilled milk and remake most of the work or even all of it nervously. Usually, I model my blockout forms for walls, floor, and ceiling in 3ds Max and then export everything as one mesh into UE4 to see whether I caught the size and shape. I fix it until I achieve the proper result and only then divide it into modular parts. This time I missed this step and split the whole scene into modular elements at once and used them to put everything together in UE4. It’s not the best or the most convenient way, but again, I could do this due to a very detailed and clear concept.

After I put all modular parts of the house together, it was time to pay attention to all the major medium and large shapes. I modeled assets that were imported into Unreal and gave them a grey base material. I set up at least one camera straight away. Usually, it is for the main shot to understand not only scale and shapes but to get some bearings on what the scene feels like and to see the composition. As I mentioned, planning is the most critical part of your work, and you can’t make mistakes here. Also, this phase is crucial for me psychologically, due to:

I am filling the scene with props, trying to make them more detailed, even though it’s only the blockout stage. This facilitates my work further.

The modeling part of the work doesn’t have any secret techniques, and everything is widely known. It’s a standard modeling pipeline: creating low-poly, then high-poly and finally baking. The only thing I would like to mention is some scripts that made my workflow easier and faster. I often use: 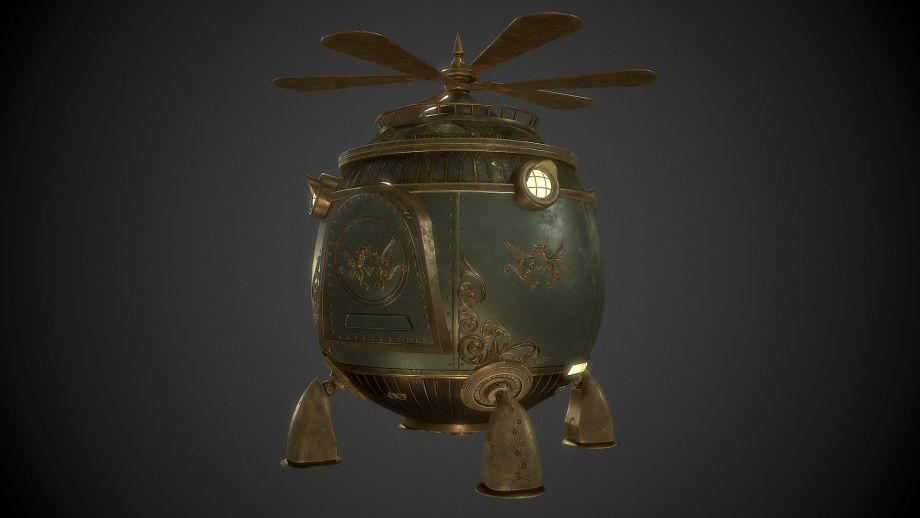 The most complicated and exciting asset from the modeling point of view in my scene was the flying machine, which is in the center, near the windows.

The main challenge I faced here was how to split the asset accurately because it’s big enough and consists of a large number of different elements. Splitting it influenced the way I would texture it. Here is what I came up with. 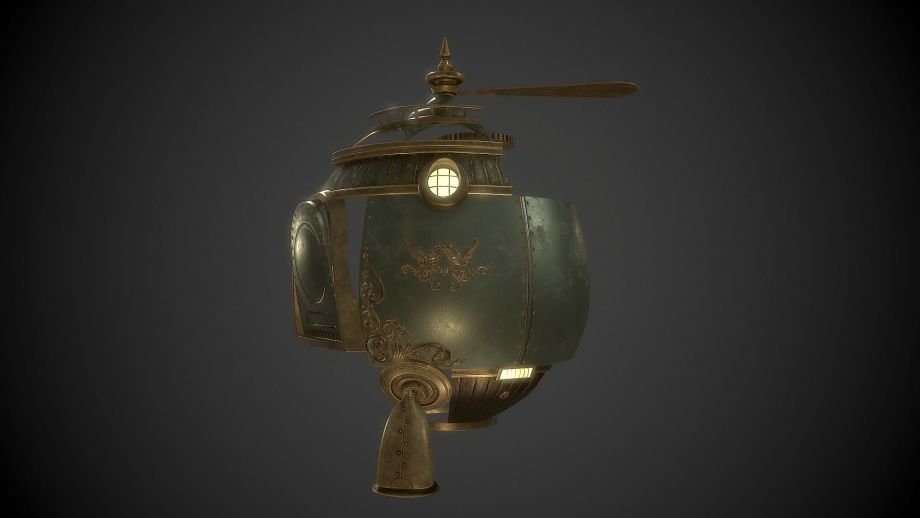 Plus, I had to think of how to group all this stuff properly. The reason for this was where to use tiles, trims or unique baking. I separated them into six groups for texturing. 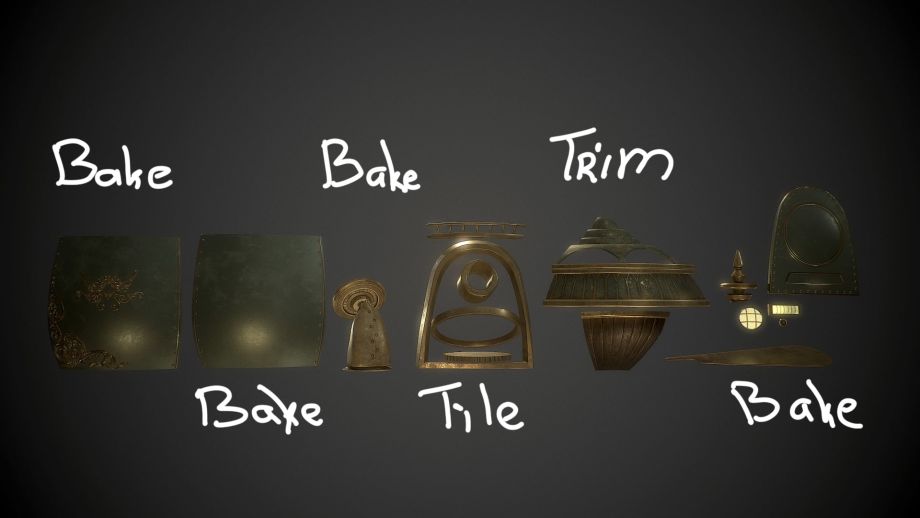 The part of the board with the ornament took my attention from the very beginning because I wanted to make it with a real geometry so one could feel the volume and relief. I didn’t know how to implement it. Eventually, I used ZBrush and the ready-made alphas by Jonas Ronnegard. I didn’t have any experience with ZBrush before, so it was the best decision at that time. 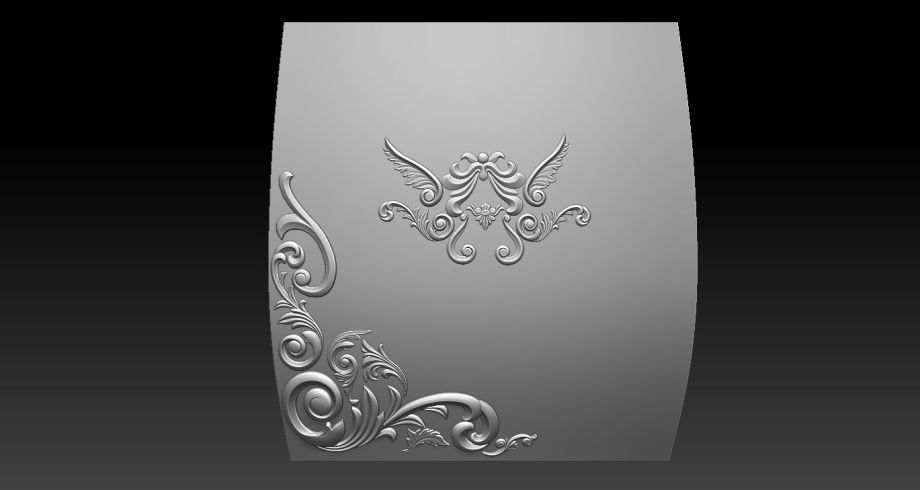 Due to time constraints and lack of knowledge in ZBrush, I decided not to make the retopology but make some decimation with a proper value and export it to 3ds Max. And there I deleted everything except the ornament, saved it as high poly and copied for low poly. Now some cheating techniques start: I put on “Prooptimizer” from the modifier list, reduced the number of polygons and then smoothed everything (some things had to be smoothed manually). I know it’s not optimal at all, and there are much more ideal approaches, but this one suited my needs perfectly. I saved tons of time and made the ornament with geometry. 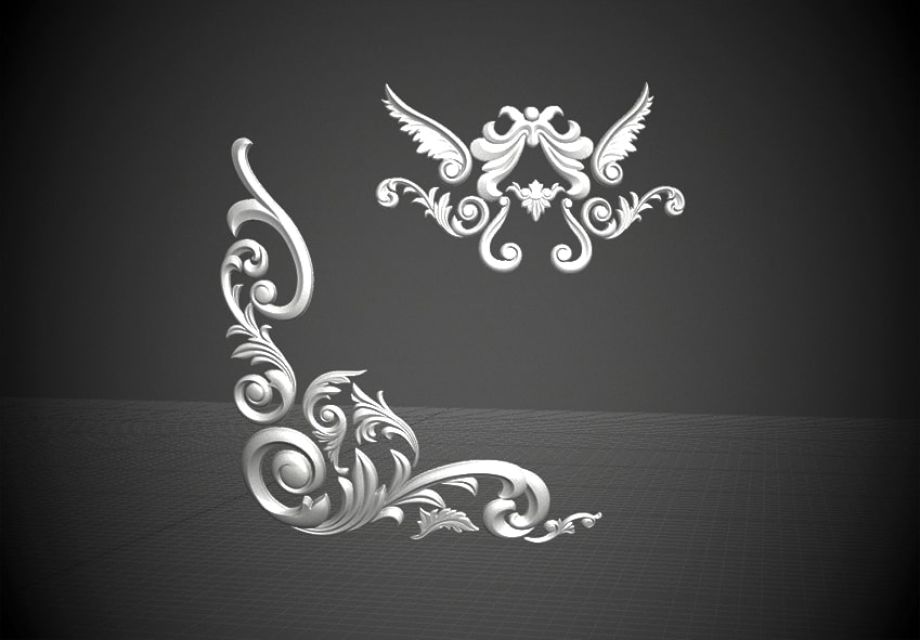 One more asset I would like to talk about is this control center. It’s simple, but I have a few words to share about it. 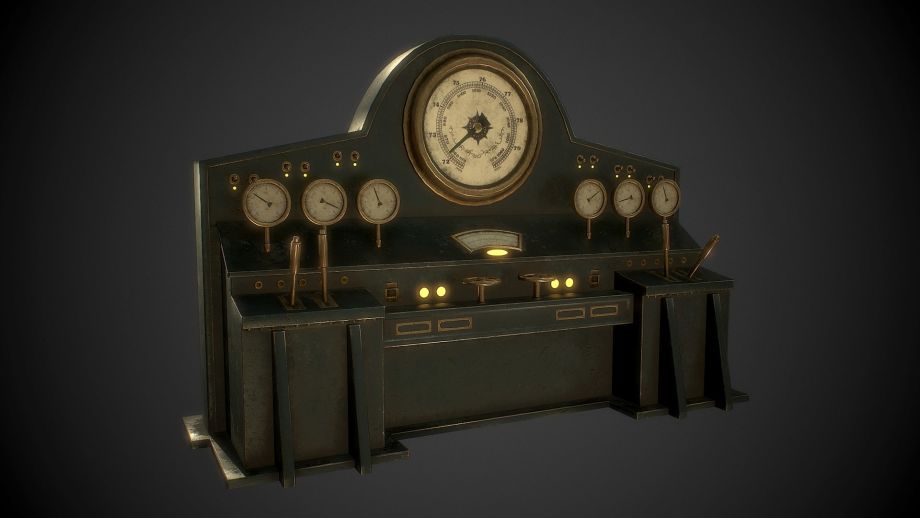 It looks interesting enough, but most elements are repeated, so initially, it seemed this way. 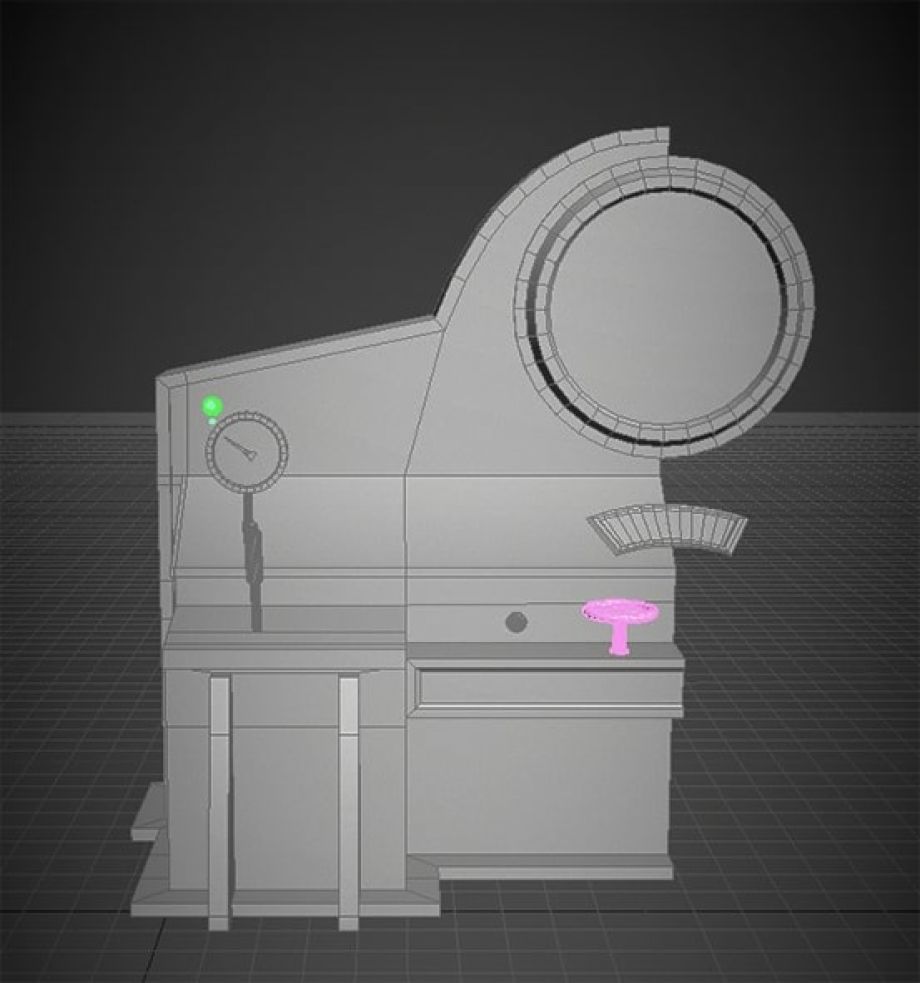 Notably, the display pointer of the device is made as a separate mesh, which I added to all other props with scales. It allowed me to give variability to all the dashboards in my scene.

Last, but not least is this asset, an excellent example of the modular approach. 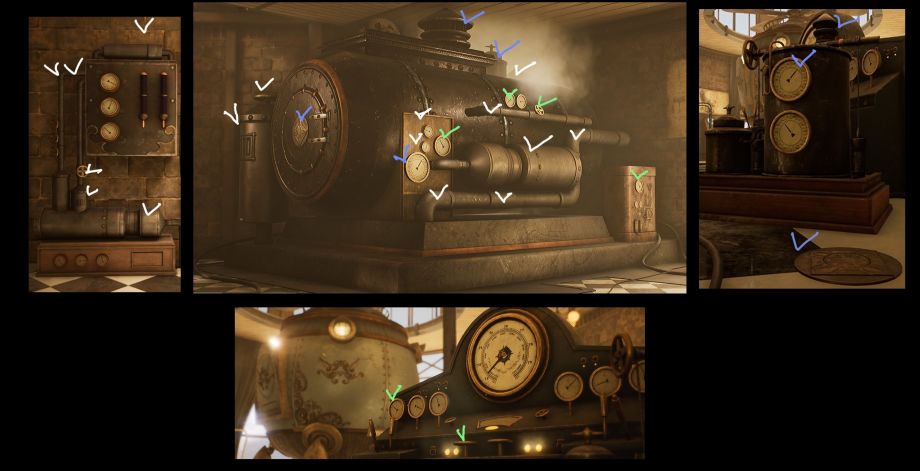 Texturing is not my favorite part of the work, and I’m not very good at it. But this time, I did my best and tried to use various techniques, such as: 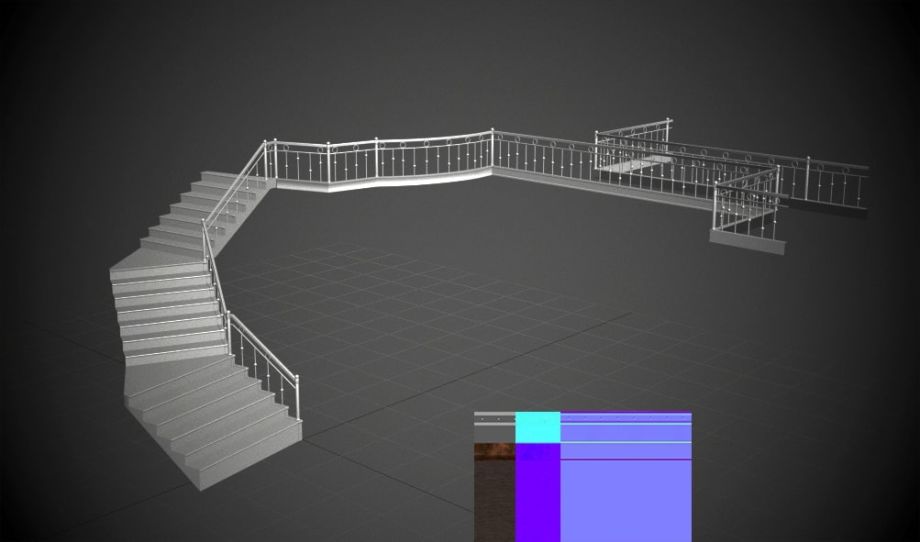 This part of the flying machine was made with a trimsheet, too. 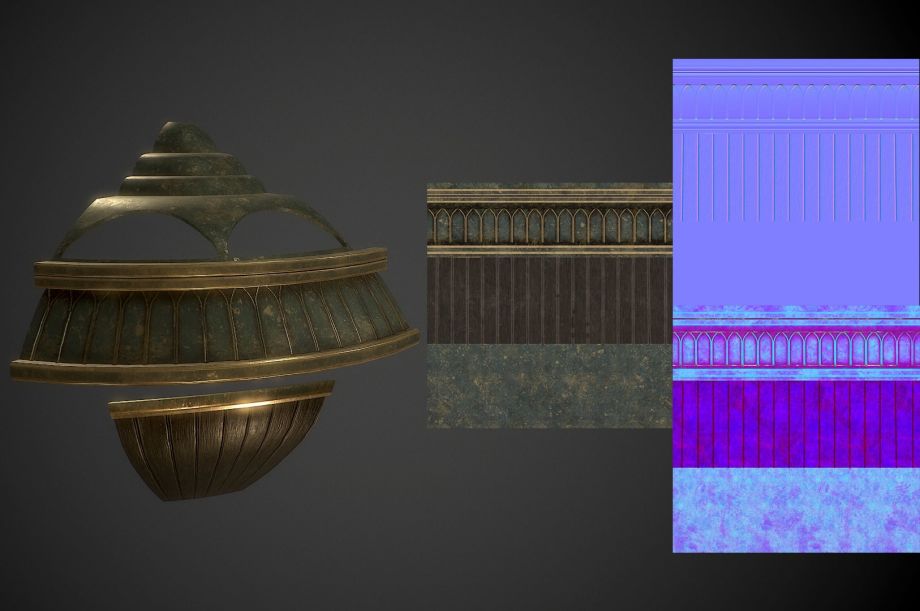 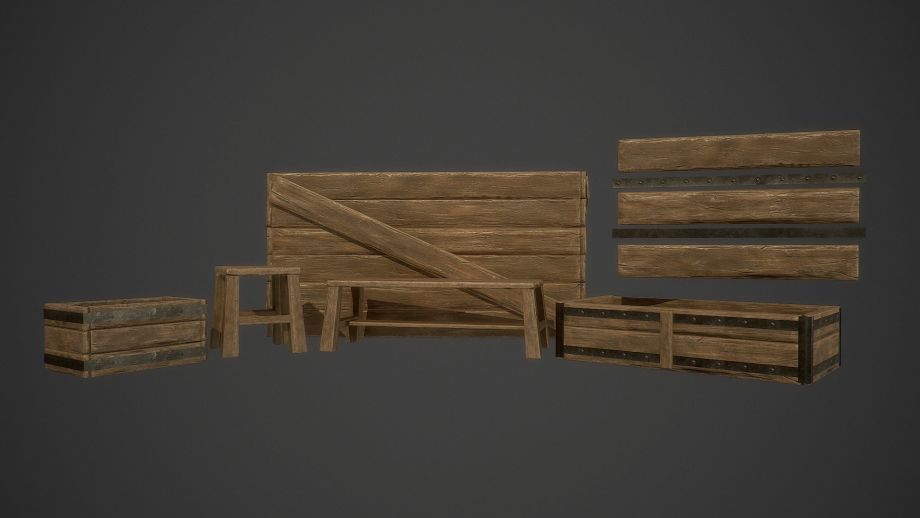 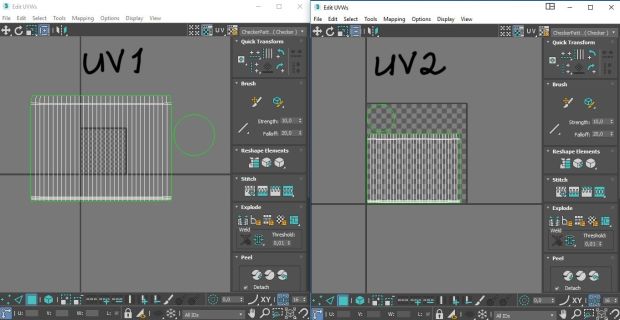 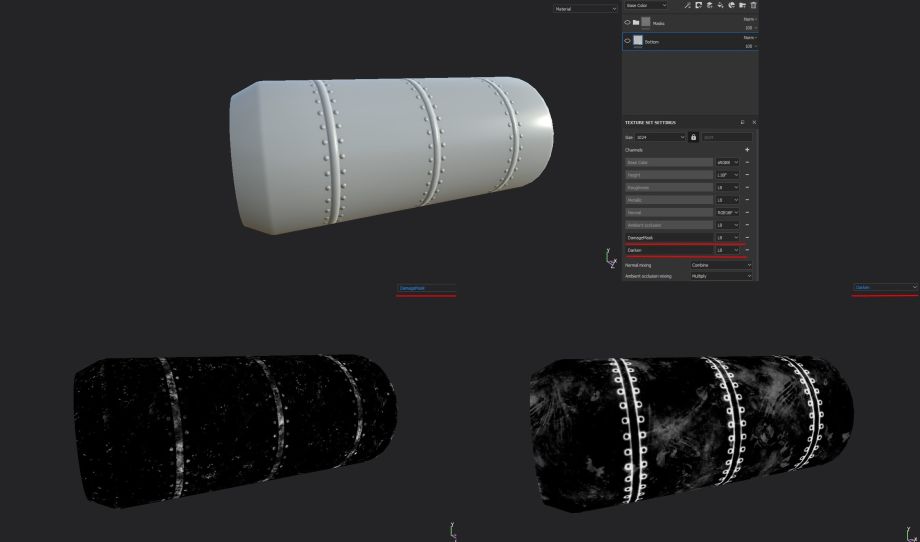 Then I exported my two custom channels with AO and a normal map. In UE4, I created Master Material to combine all the textures I’d made. 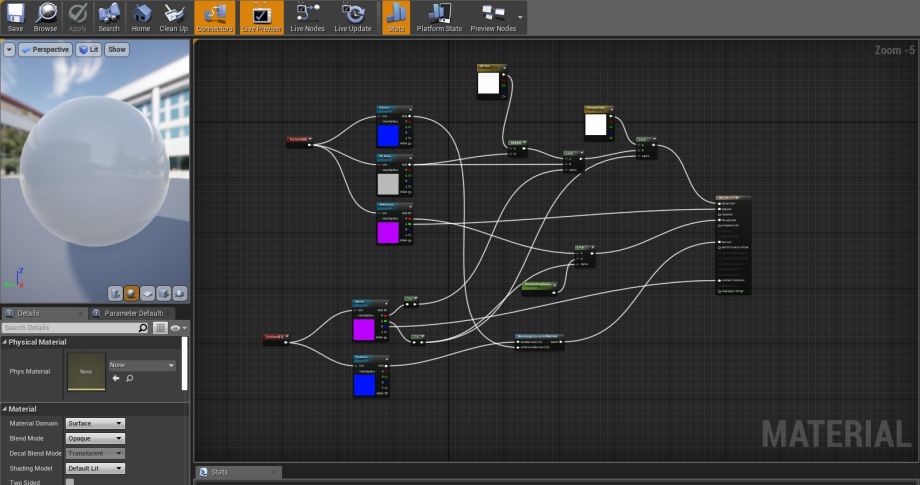 By changing values, I could find the result I wished for. 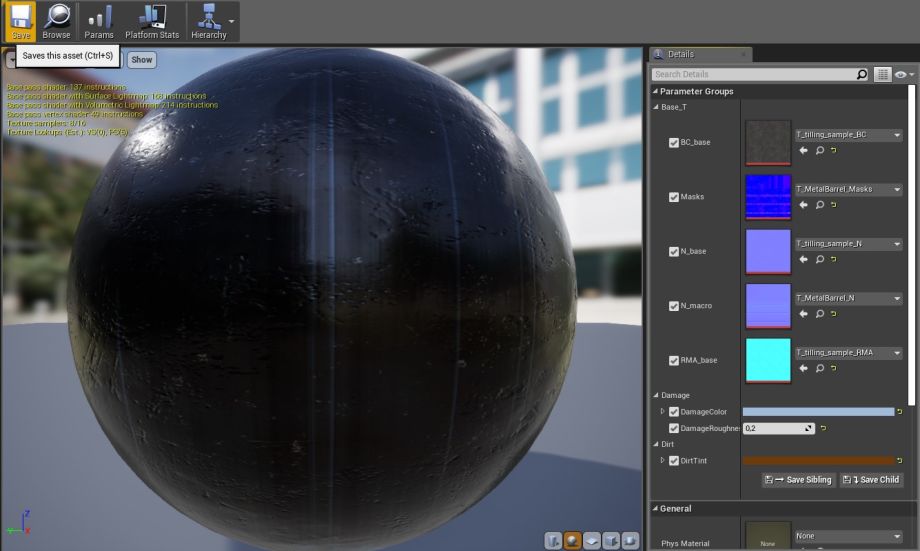 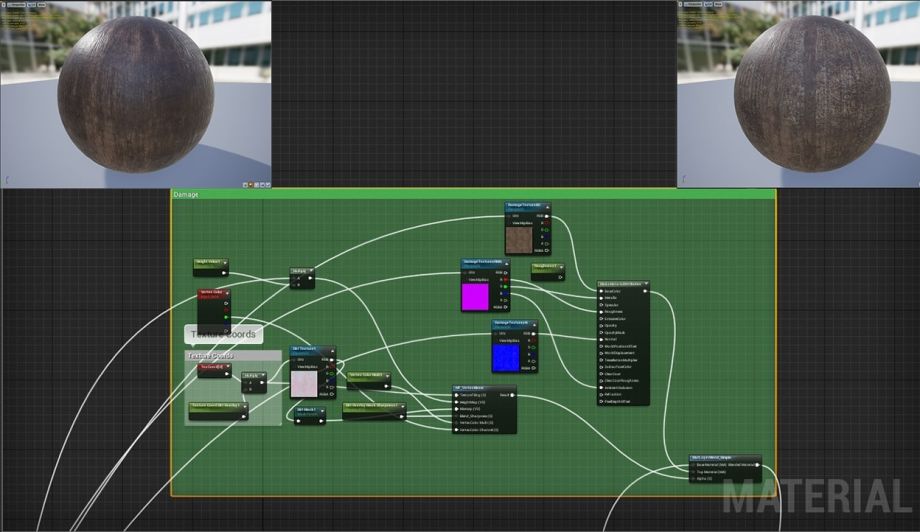 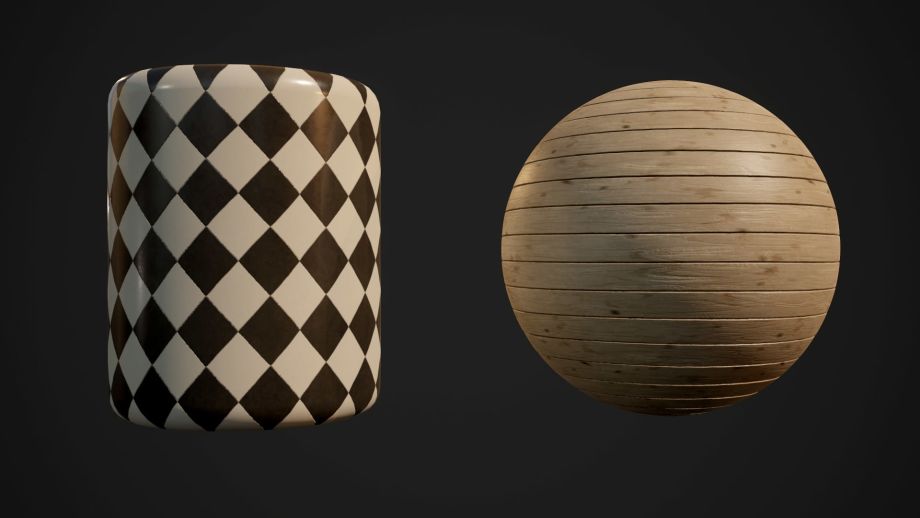 I textured all other assets as usual by creating my materials in Substance Painter from scratch or using material libraries and twitching them to my needs.

Oddly enough, the lighting set didn’t take as much time as I had expected. And it turned out to be simple enough. All the light in the scene was baked.

I used directional light as the primary source of light and also soft god rays, changing the light shafts values. 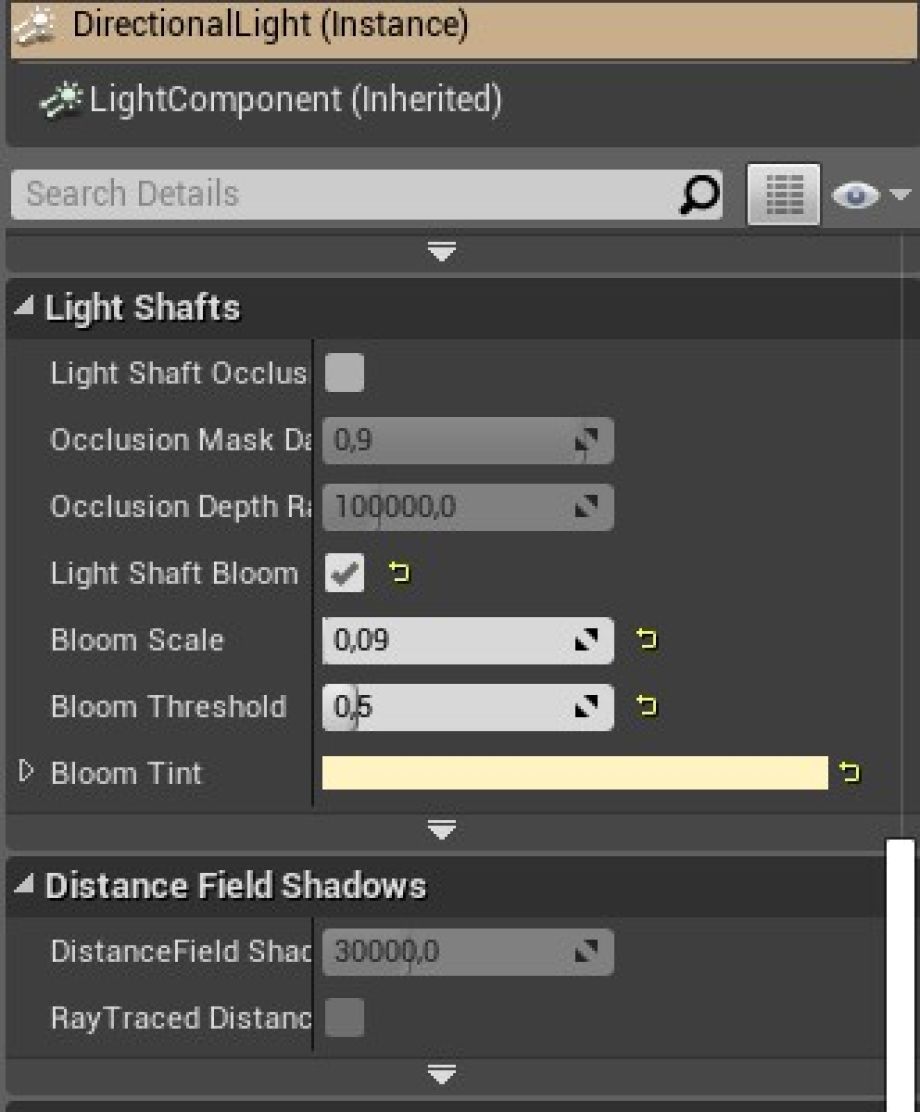 Moreover, I added rectangular light to the window with extreme intensity values to complement, enrich and diversify the primary light source. And the final touch was the HDRI in the SkyLight with minimum intensity, just to add a bit of brightness plus Volumetric fog – that’s all. The rest is common enough: lamps with light material, spot and point lights. As for additional, fake light, I used it only to highlight a little bit more of the steam machine.

This scene helped me to improve my knowledge, master skills, gain confidence, try new pipelines, deal with difficulties and expand my portfolio. The first and most important thing I got was the experience. Now I’m sure – the more challenging goals you set for yourself, the more you get from your work. And if you have somebody who is more experienced and can help or give feedback, it’s an excellent chance to grow as an artist. Plus, if you have an opportunity to get a mentor –get one for sure, it is worth it.

To finish, I would like to quote Roy T. Bennett: “Great things happen to those who don’t stop believing, trying, learning, and being grateful”.