Christoph Schoch talked about the production of his characters including the Legend of Zelda ones: sculpting, working on the hair, glowing materials and more.

Christoph Schoch talked about the production of his characters including the Legend of Zelda ones: sculpting, working on the hair, glowing materials, and recommendations for learners.

I’m from Toronto Ontario. I’ve lived there my whole life aside from 4 years when I lived in Ottawa to attend Carleton University and Algonquin College in a joint program called Interactive Multimedia and Design (IMD).

My start in the industry was a very slow road. After I graduated I spent a year trying to find a job. I did the odd freelance gig here and there although each one only lasted a couple weeks. To fill up time I started making some mobile games and modeling some characters. None of these games are still up since they weren’t successful but they were great learning experiences.

By the end of the year, I was lucky enough that Toronto’s animation industry was picking up. I was hired by a studio called Arc Productions. They needed a lot of people at the time so they were willing to hire people fresh out of school. I started as a Modeler/Rigger on Thomas the Tank Engine. It was a good introduction to the industry since the show was well established and had a solid pipeline.

After a year though I needed a change and requested to be put on another show. I took this opportunity to get away from rigging which I mainly learned to get my foot in the door. Having been making characters on the side all this time allowed me to transition over fairly easily.

I started working on a show called Max Steel as a character modeler. I stayed until the end of season 4 when I was approached by Guru Studio who wanted me to come on to one of their new shows. The timing was very fortunate for me as Arc Productions went bankrupt a few weeks after.

I ended up on a show called Abby Hatcher which just premiered this month (January). When I started the new show at Guru ended up taking a while to take off. Since it was a slow start I was put on a couple other projects including a show called True and the Rainbow Kingdom, a short called Space Between the Stars and a mobile game called Fracter. This was over the course of my first year and a bit at Guru.

Once Abby Hatcher picked up again I was promoted to a lead modeler. It was around this time that I reflected on where I was at. Since the beginning, I wanted to work on games but had been in preschool animation my whole career. Although the team and the studio have been fantastic I did feel I wasn’t where I expected to be by now. I started doing a bit of freelance for a couple projects on the side in the hopes to transfer over into games.

One of those projects is yet to be announced but the other is called Dragon Slayers. The game’s website just recently went up. It will be having a kickstarter in March as well. I highly recommend checking it out. The team is fantastic and they deserve a shoutout. Here are the characters I modeled for them:

After getting to the end of the season for Abby Hatcher I decided to set off on my own. At the beginning of this year, I switched to full-time freelance. That’s where we are now. I’m not sure whether or not I’ll be doing freelance forever. If I get an opportunity for in-house work I may take it up depending on what it is but for now, I think I’m going in the right direction.

The Legend of Zelda Characters

I’m sure it’s very clear that I’m a big Zelda fan. I’m in no way unique in that sense but it is what inspired my early fascination in games. When the N64 rolled around I was introduced to creating 3D art, Ocarina of time was a notable title. That said I wouldn’t learn how to use any 3D tools until late high school.

I’ve been using Link as almost a landmark character to check my progress as a 3d artist. Not intentionally but I’ve modeled him 3 times now so it seems to have worked out that way. I was inspired to model this latest version after seeing Trent Kaniuga’s design. He was very generous to give me some feedback while I was sculpting.

I was pretty happy how the model turned out and left it at that for a while. Later I saw a contest called Retrogasm coming up. That’s when I decided it might be fun to make a Zelda to match the style of Link. This time I made the design myself but I did get some advice from Trent. 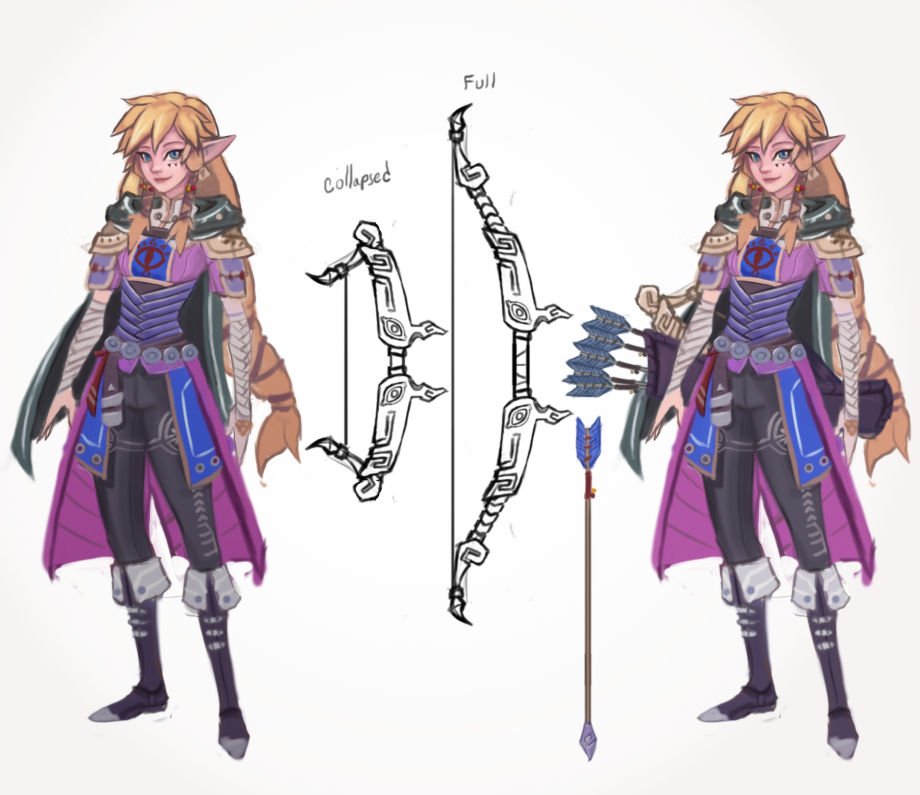 Honestly, I feel the hardest part for me is and always will be getting the anatomy right. Once you have a solid foundation you can do just about anything. The tricky part isn’t just knowing what’s accurate either. You need to know where you can break the rules to make it fit your character and the feel of the world you want them to be in.

Now I don’t know if I’d call it a mistake since it is part of my process but I do tend to adjust the proportions and anatomy right up until the end. Ideally, it’d be nice to get it right before you start making all the gear but that doesn’t tend to happen for me.

When starting a new character I like to start with a bunch of spheres and tubes. This allows me to keep things organic and quickly rough in the base anatomy by stretching them into general forms. You’ll have to bare with me here because the early stages look… well they look really bad. A few key notes I’d like to make about this stage are that I’ve included the hair and eyeballs and I’m working in perspective. Having the eyes in really helps found the structure of the skull and the hair helps with the likeness. If you’ve ever seen someone shave their head I’m sure it’s taken you a moment to recognize them. Likeness doesn’t have to mean making it look like a specific person either. It’s about getting the likeness in your head. Working in perspective is also very important since otherwise, you (or at least I) tend to compensate for the lack of perspective in the sculpt. When you turn perspective on after you end up with a strange double distortion.

Once I have the proportions in an okay place I’ll dynamesh it all together and begin sculpting. 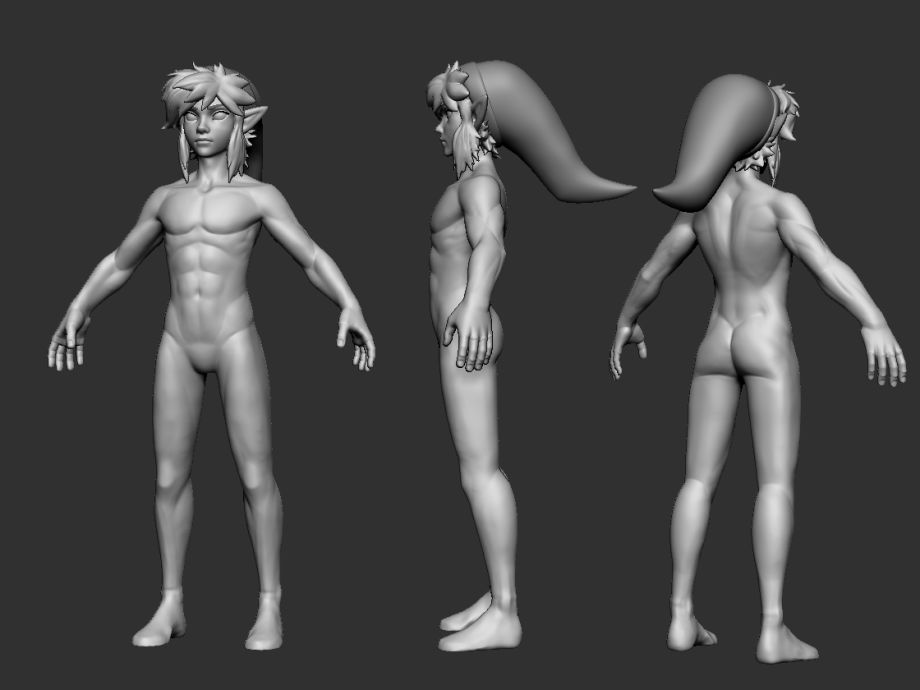 I wish I could say more about that part but really it’s just looking at anatomical reference and sculpting away. I will note that I make the fingers last since otherwise, they end up dynameshing together. I keep my dynamesh fairly low and make it denser as I add detail.

Finally, when that’s done I do a ZRemesh and clean it up a bit in the face and hands since those are usually trouble areas for automation. 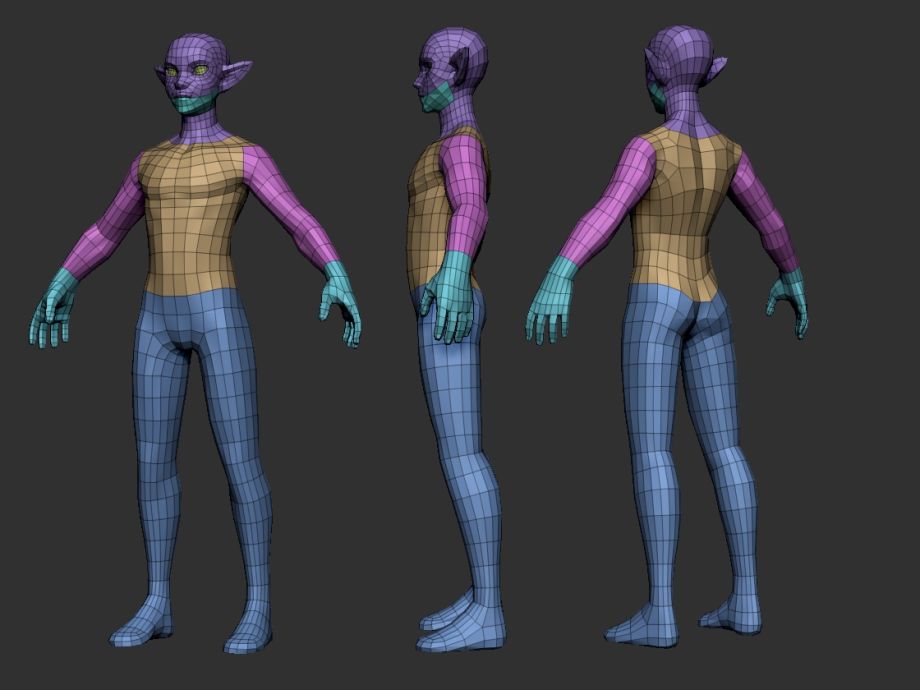 With the body in place, I can then sculpt in the clothing. I do this by masking areas of the body and using the extract tool. I usually avoid having hollow objects since they’re hard to sculpt on so I tend to delete the inner shell and then fill the holes. Next, it’s a matter of pushing things into place followed by a quick ZRemesh to sculpt on. 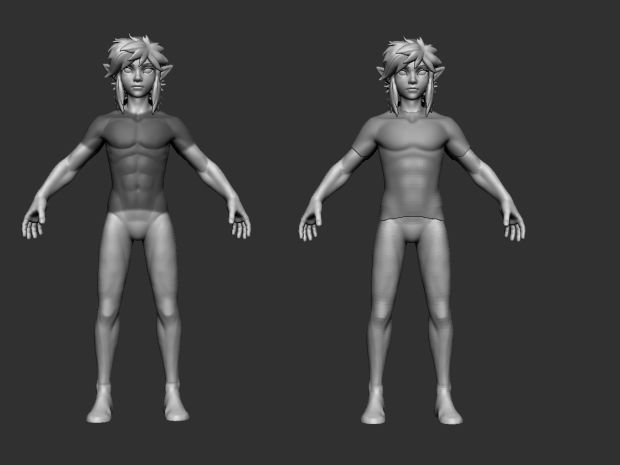 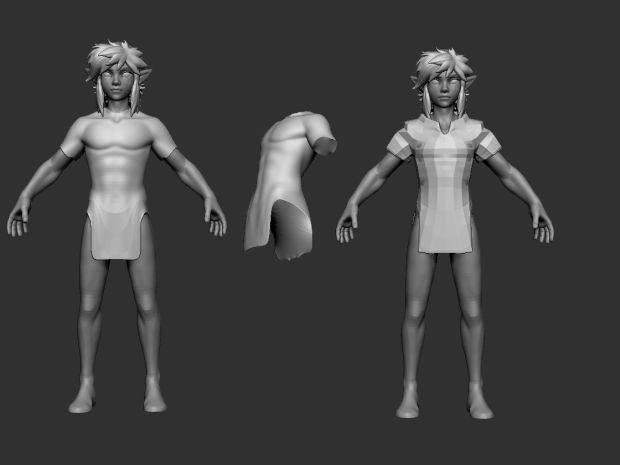 I’ll do this for most organic parts. Hard surface things I model the old fashioned way in Maya but I sometimes make rough objects in zbrush first to get the general shape and size.

Working on the Hair

Hair is tricky and honestly, I still don’t think I have it quite right. The biggest thing is of course to use an anisotropic shader. You’ll want to generate directional maps. (I have a video about that, check it below). When it comes to a specular and gloss map I generally use the same texture for both. I convert my base diffuse to grayscale and paint in additional streaks to break off the sheen.

My base texture usually has a gradient to darken near the hair tips and at the roots of the hair. Sometimes I’ll amp the gradient up a bit in the specular map so that the sheen is softer and stay in areas that I want it. This isn’t physically accurate but I like the look it gives me. 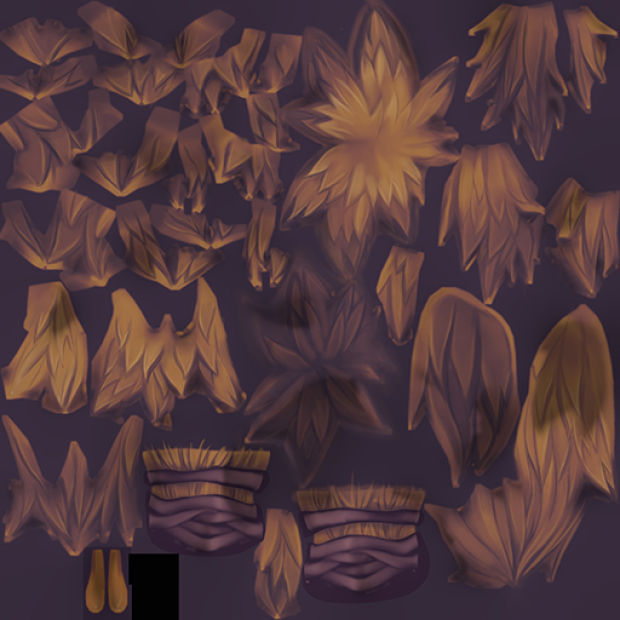 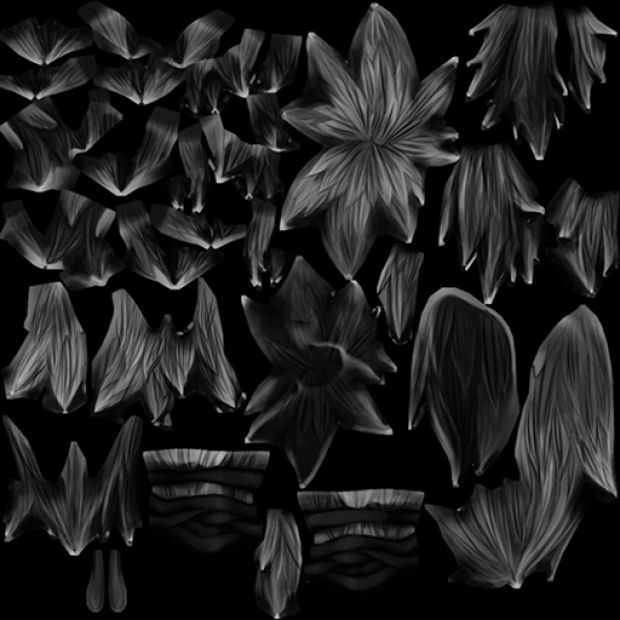 I will also assign some subsurface to the hair so I don’t get muddy black shadows. It also allows me to soften the normals a bit:

The last note I have for anisotropy setup is to lean your highlights towards white the brighter they are. I usually use the main reflection and a secondary one. The main one is bright and sharp so I’ll make it white. The secondary one, however, is soft so I’ll tint it slightly. Colored highlights tend to look metallic so don’t overdo it. 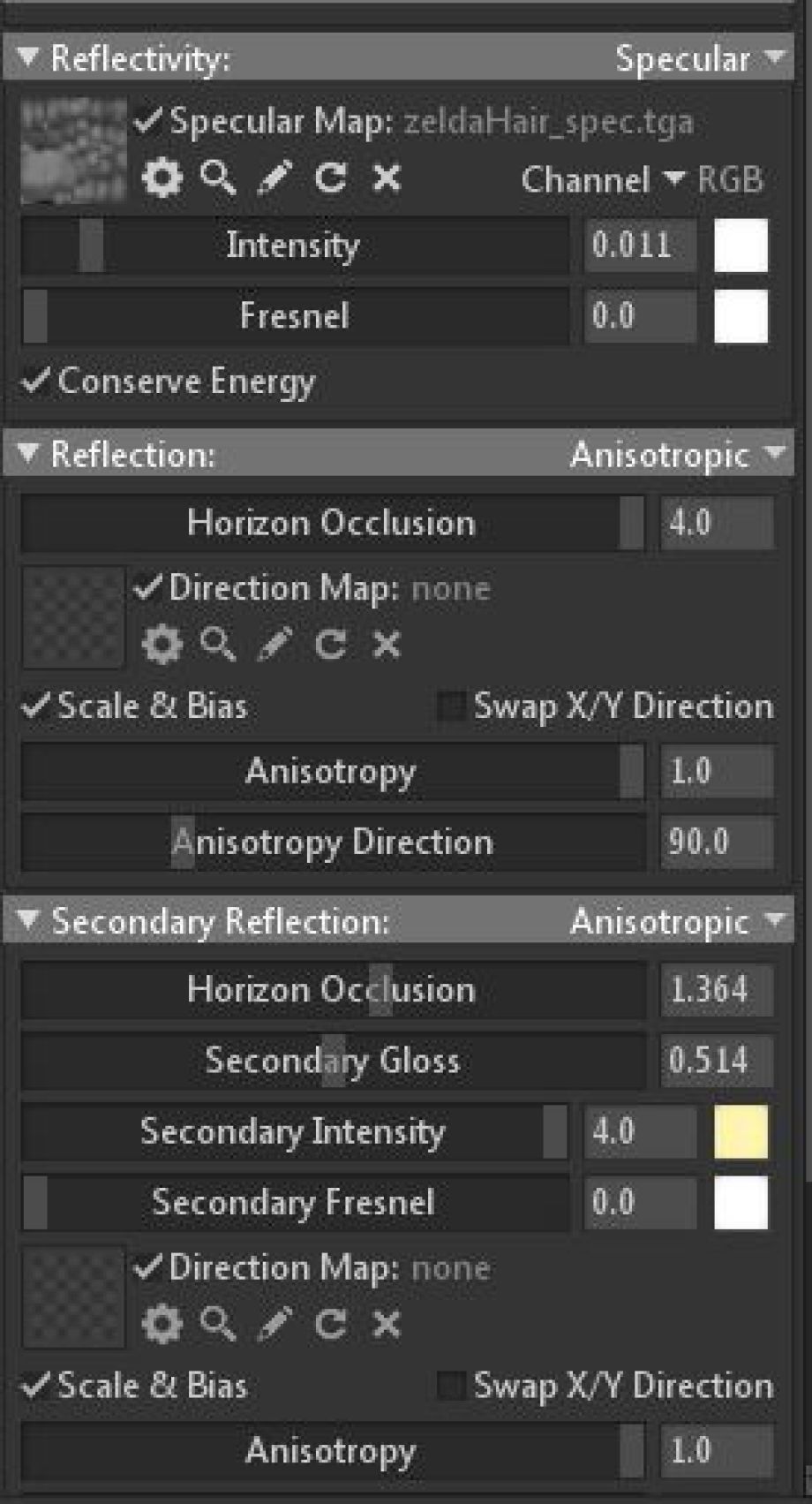 Glows are pretty straight forward. As a base, I just assign an emissive map to define where I want the glow. I’ll also turn on bloom if post-processing filters are available to get more of a glow in the area. I push it even further by throwing in an Omni light. 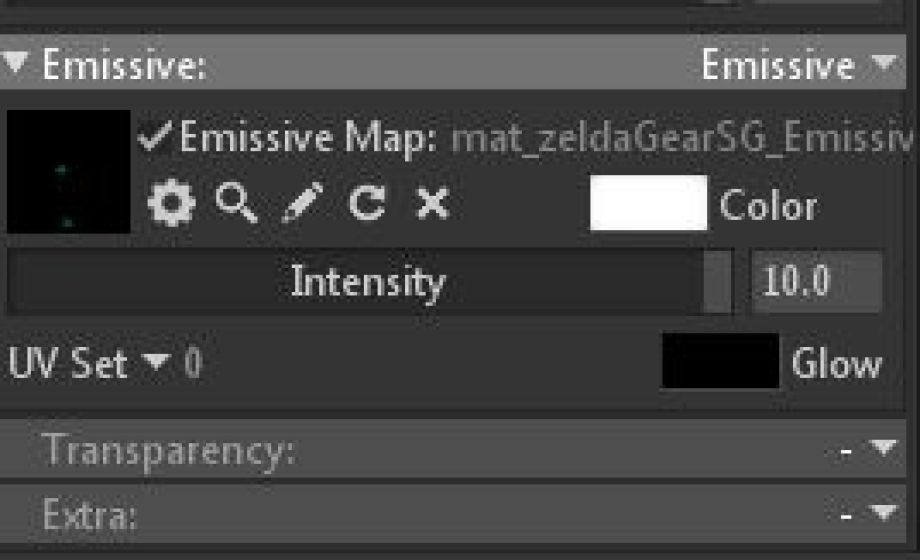 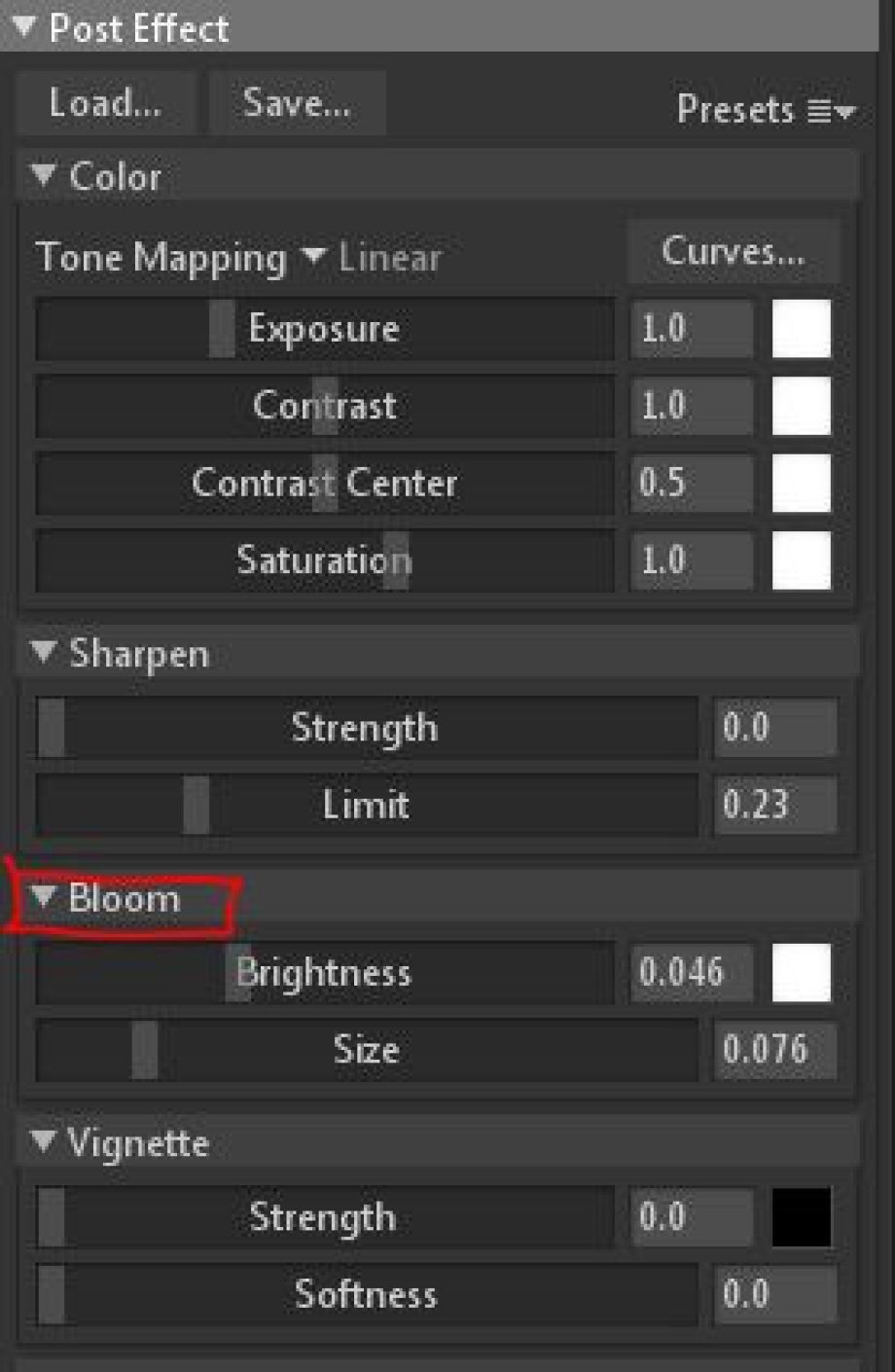 My recommendation would actually be to make games. Go through the whole process at least once. There’s nothing like trying to implement a model you’ve made to show you where your mistakes are on the technical side. Even just rigging your model and trying to deform it. It’ll be very apparent where the topology just isn’t holding up. This also answers the second question to which I say don’t avoid mistakes. Make them. Try and fail a bunch, that’s how you learn.

As for the presentation, learn about lighting and posing. Nothing kills a model like a T-pose and dark lighting. For characters, a good place to start is learning about basic 3-point lighting. As for poses, find lots of references, try to show some personality avoid being too stiff.

Another good idea is to add a little bit of a ground under them. A subtle impression of a world. This gives them a context.

If you want to show off your sculpts as well I recommend trying KeyShot. It gives you very nice results quickly and easily. 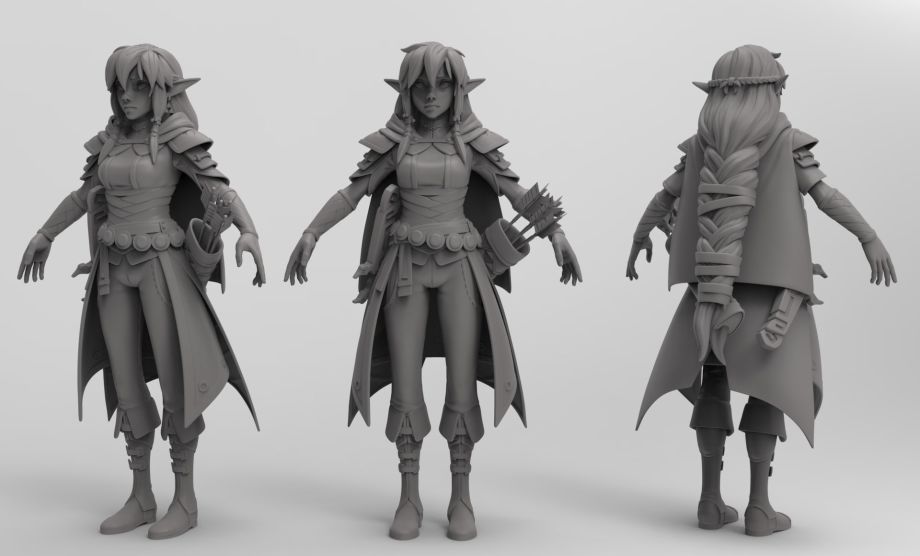 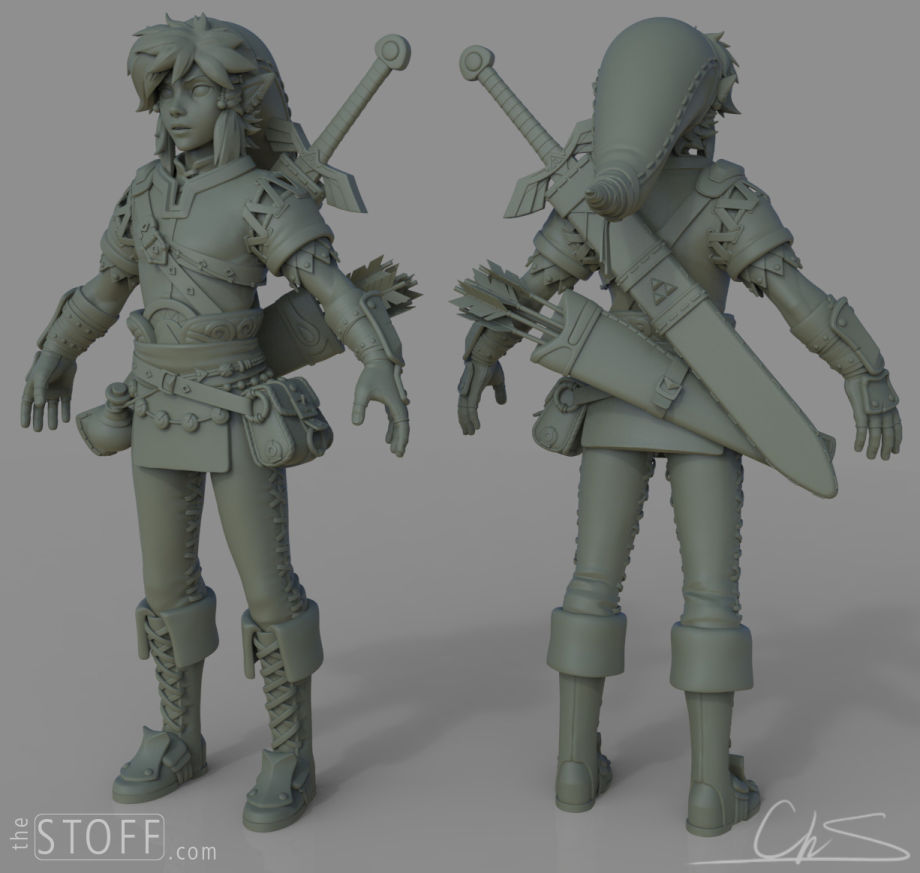 To close off, I’d just like to say that I truly believe anyone can do this kind of work. You just need to have the drive to push yourself and keep honing your craft. Having side projects are very important in progressing as an artist. Don’t get complacent, keep asking yourself what’s next. No matter how far I get I continue to create my own art and games and I recommend that anyone getting into creating art for games (or art in general) do the same.

By the way, here’s proof of something I’ve been building on the side! Anyone interested in my latest side project, a game called Infinite Sky, can check it out over here. 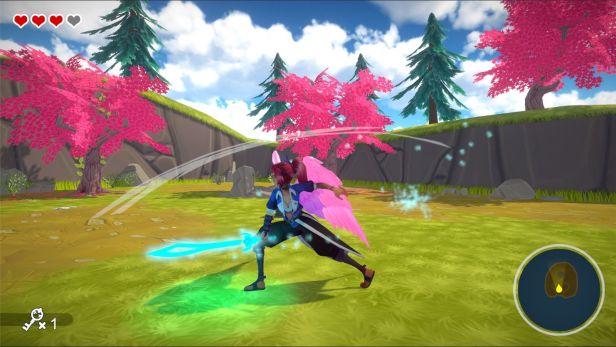 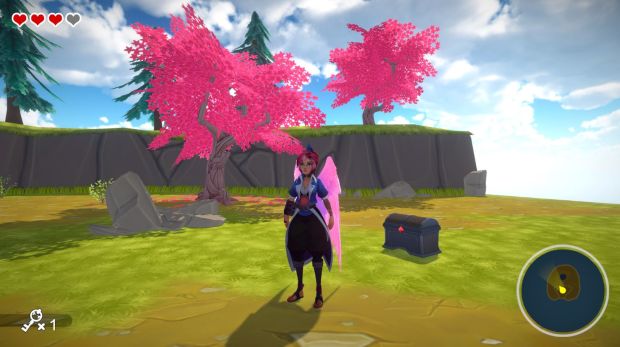 If you can think it, you can make it with Photoshop CC, the world’s best imaging and graphic design software. Create and enhance photographs, illustrations, and 3D artwork. Design websites and mobile apps. Edit videos, simulate real-life paintings, and more. It’s everything you need to make any idea real. 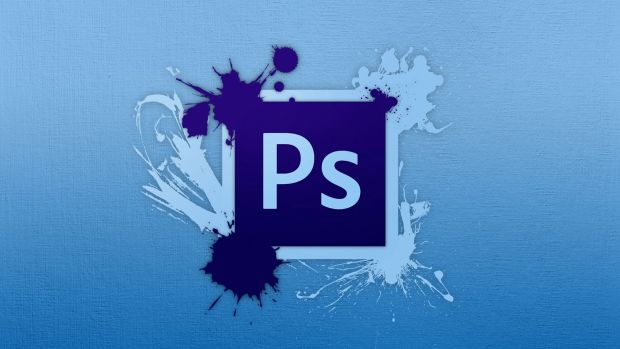