Cristina Martín did a breakdown of her project Spirit Sword discussing the modeling stage in 3ds Max and ZBrush, texture painting, and presentation.

My name is Cristina, I’m a 3D artist from Barcelona, Spain. In 2013, I studied Graphic Design, which allowed me to put into practice and improve my skills in the creation of graphic interfaces, logos, and brands. In 2017, I got a double High Certification Education in 3D animation, video games, interactive spaces, virtual reality and augmented reality where I learned solid foundations of video game development from start to finish.

The same year I finished my studies, I started my internship at Kaneda Games SL, a small Indie company in Barcelona where I was in charge of creating 3D characters for video games, both modeling and hand-painted texturing. Before finishing my internship, I was hired by Madbox Games as a 3D artist. Since then I’ve dedicated myself to creating incredible mobile games with a great team.

Curiosity is something that has always motivated me, so I’ve spent many hours at home learning new software and workflows thanks to courses such as the ones available at Odin 3D, specifically the ZBrush one. Since then, I have become much more efficient when it comes to working on high poly and giving details to my personal projects.

It had always been clear to me that I wanted to work in the art world. However, I was not sure about which field I wanted to work in, so I decided to try several of them to decide what my future would be. I started out drawing manga, from there I moved on to more realistic digital illustration when I got my first digital tablet. I started my graphic design studies to create logos, brands, and web pages. Shortly after, I discovered the wonderful world of 3D modeling, took several courses on Maya and Softimage where I learned how to use these programs very quickly. Later, I saw the possibility of getting a Certificate of Higher Education in 3D Animation and decided to go for it. 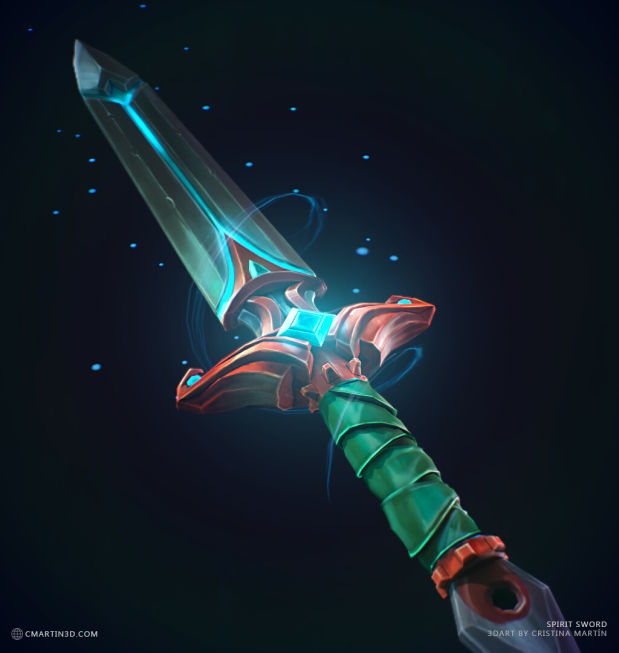 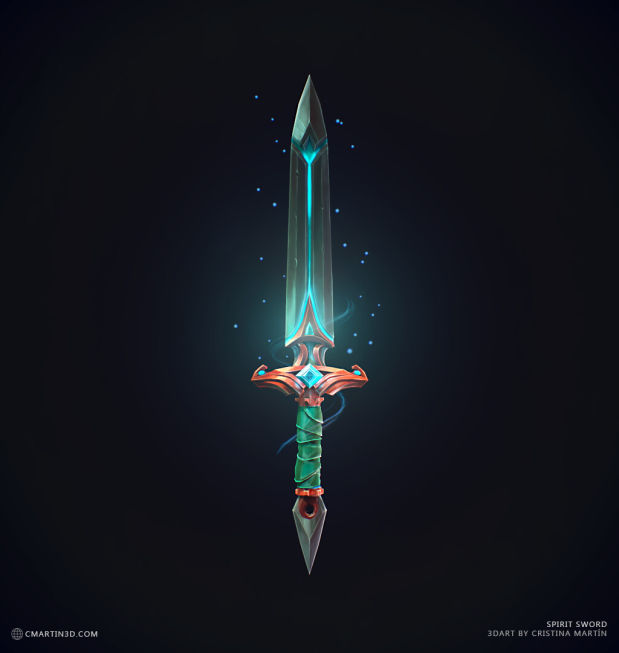 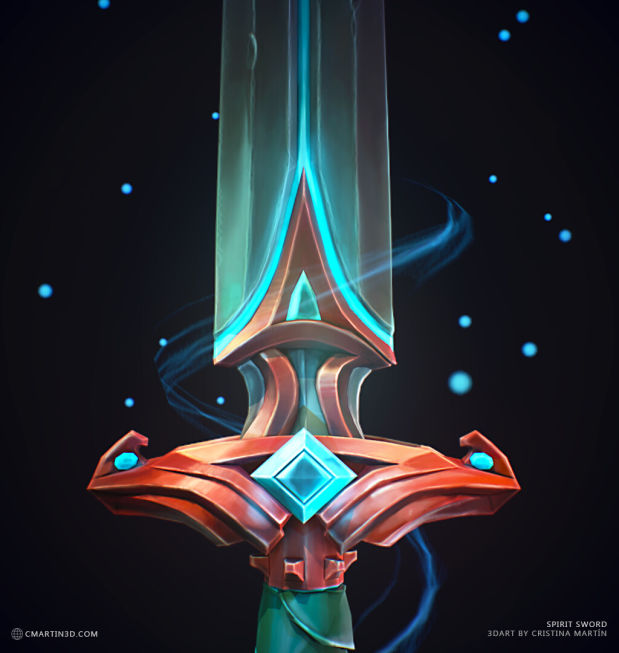 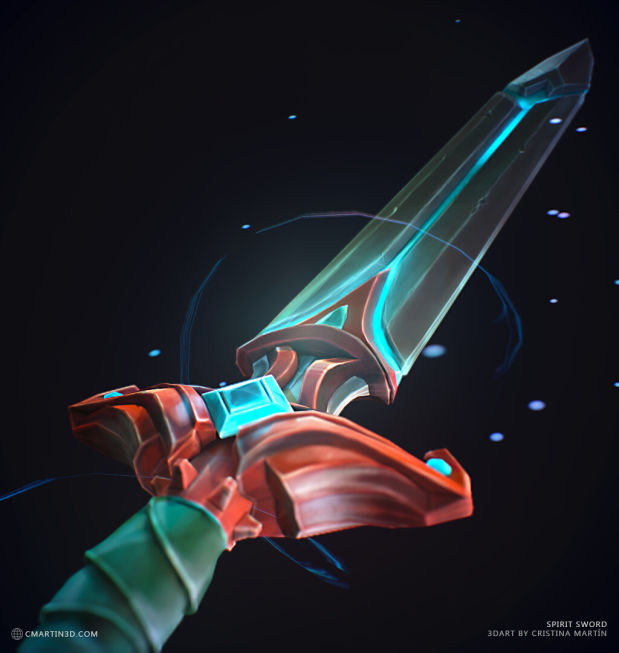 I have little time to invest in my personal projects, so I thought about making small pieces for my portfolio. I wanted to do something that I hadn't worked on for a while and to see how I’ve improved after the last sword I made.

I began the tireless search for ideas until I came across the wonderful concept art of Julio Nicoletti. I must admit, I was hesitant about which of his works to choose, but I finally settled on this one as its curved handle shapes would pose an interesting challenge to test my skills.

The chosen concept art had everything I needed, so I didn't have the need to use more references.

The first step was to start 3ds Max and place my reference on a plane. Next, I began to create the mesh vertex by vertex following the flow of the sheet and paying attention to every edge and gap that I saw. In the case of this concept art, each zone was very well marked, so placing my vertices and joining them was a relatively easy task. At all times, I had to keep in mind the depth the sword was going to have. 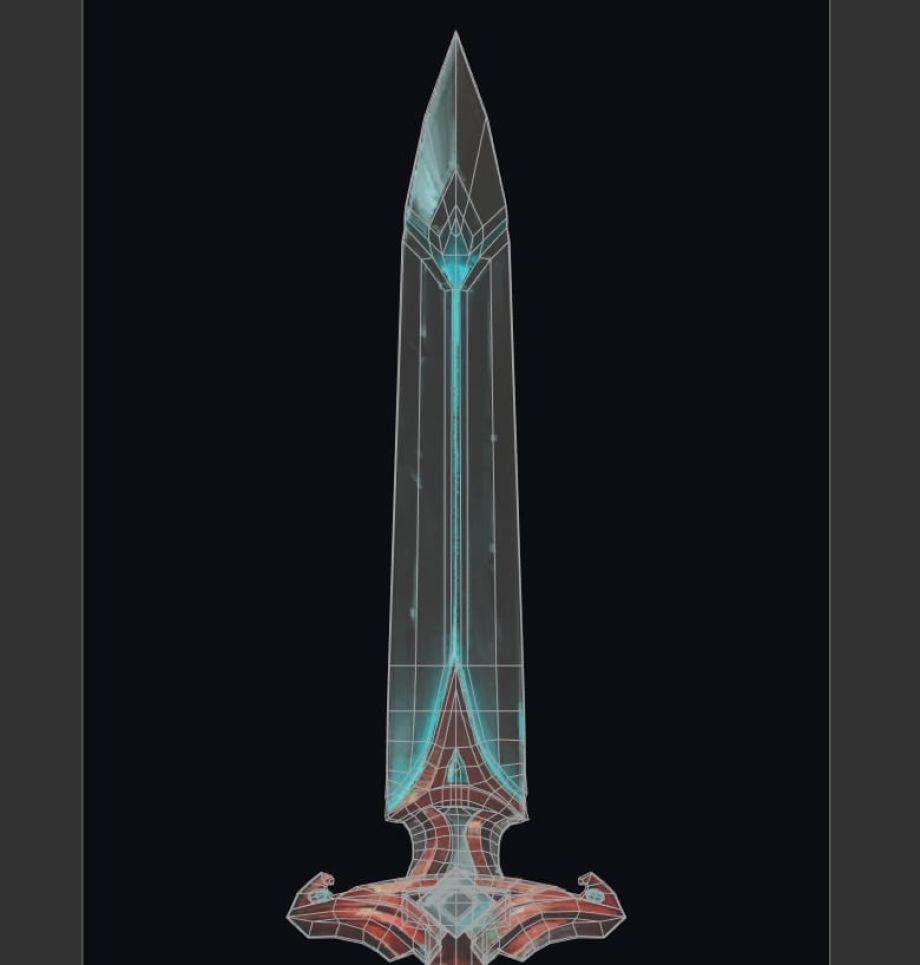 Once the entire mesh was drawn, I began to extract the vertices and edges, giving volume to each part of the sword. This is a moment when you have to be especially careful not to distort any part in the front view. 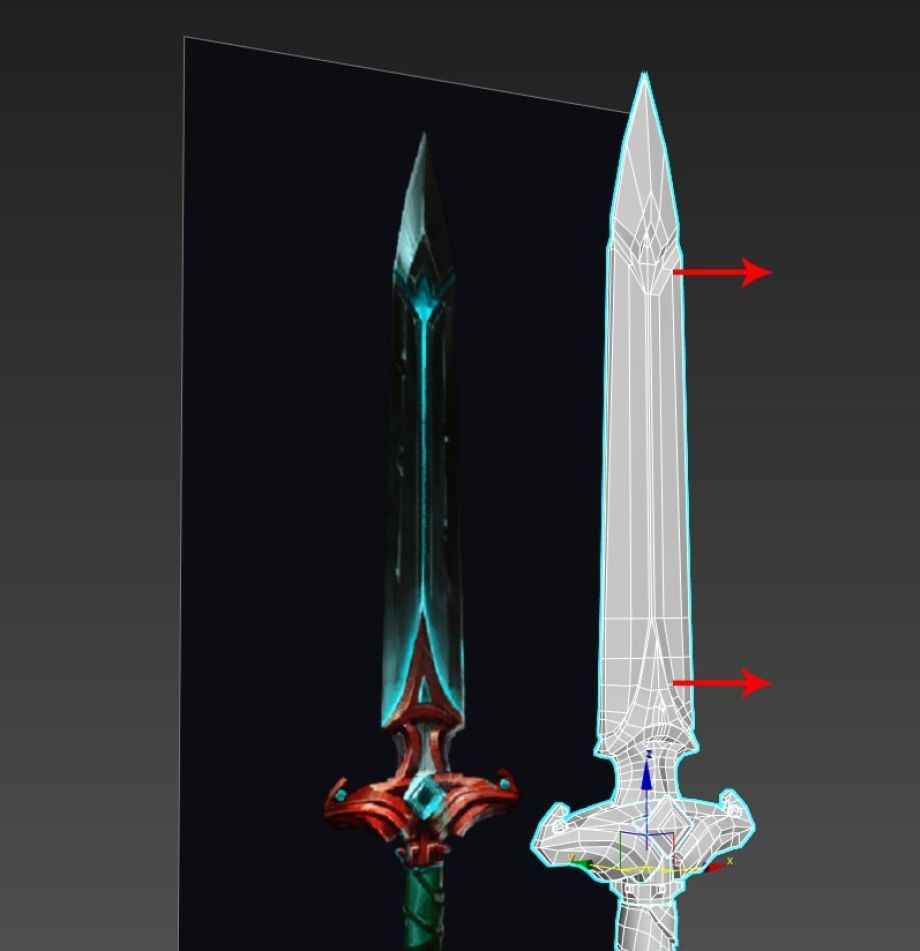 There was a part where I used GOZ to create the leather handle strips. To do this, I used the CurveStrapSnap brush on a cylinder with the appropriate size, and little by little, using the Move brush, I positioned each part imitating the concept art. 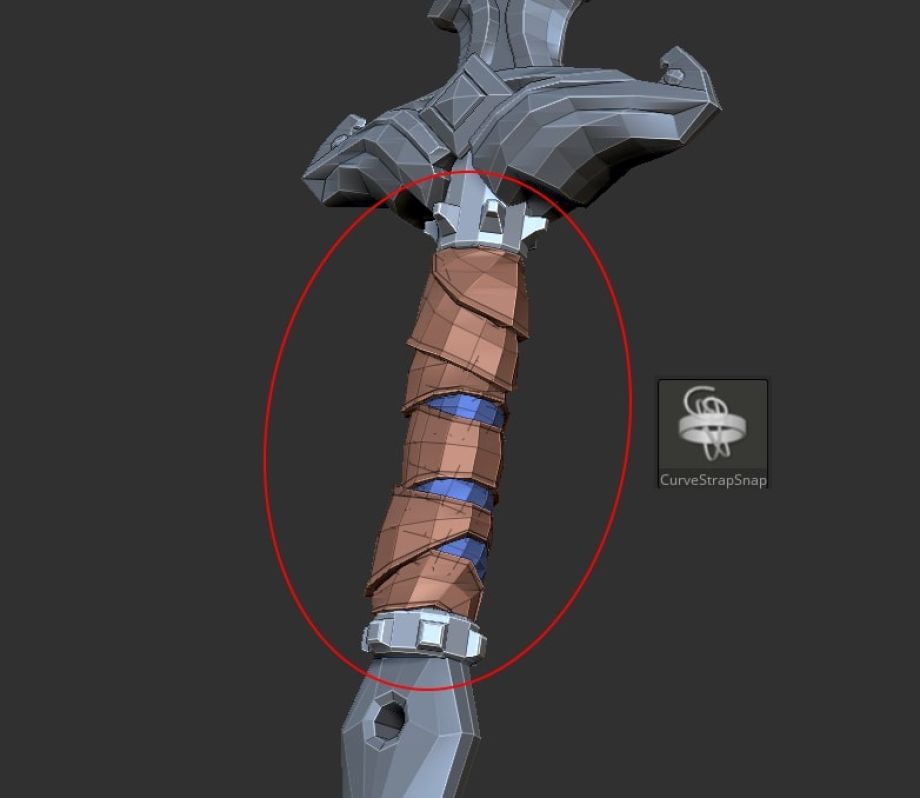 Once I had the sword base finished, I returned to GOZ again to get started with the high poly.

It was clear to me that the model I was working on in 3ds Max would be the final geometry. Therefore, when sending the model to ZBrush, I had to make sure that all the edges of the sword were respected when subdividing the mesh. I worked with ZModeler on each part adding creases to the edges so that the mesh always kept the shape.

Once the mesh was prepared, I began to detail it in a very subtle way. My main objective in the high poly was to generate certain features that would help me later during the texturing process in 3D Coat, so I limited myself to breaking the edges with the TrimDynamic brush, going over them with DamStandard, generating some notches in the sheet imitating the concept art and giving that metal texture to the pommel and blade. I always try not to modify the shape to respect the top-down model.

In the process, I mostly used standard brushes that you can find in ZBrush. For the metal texture, the gemstones, and the notches I used brushes from Michael Vicente, OrbFlatten_Edge and Orb_Cracks. 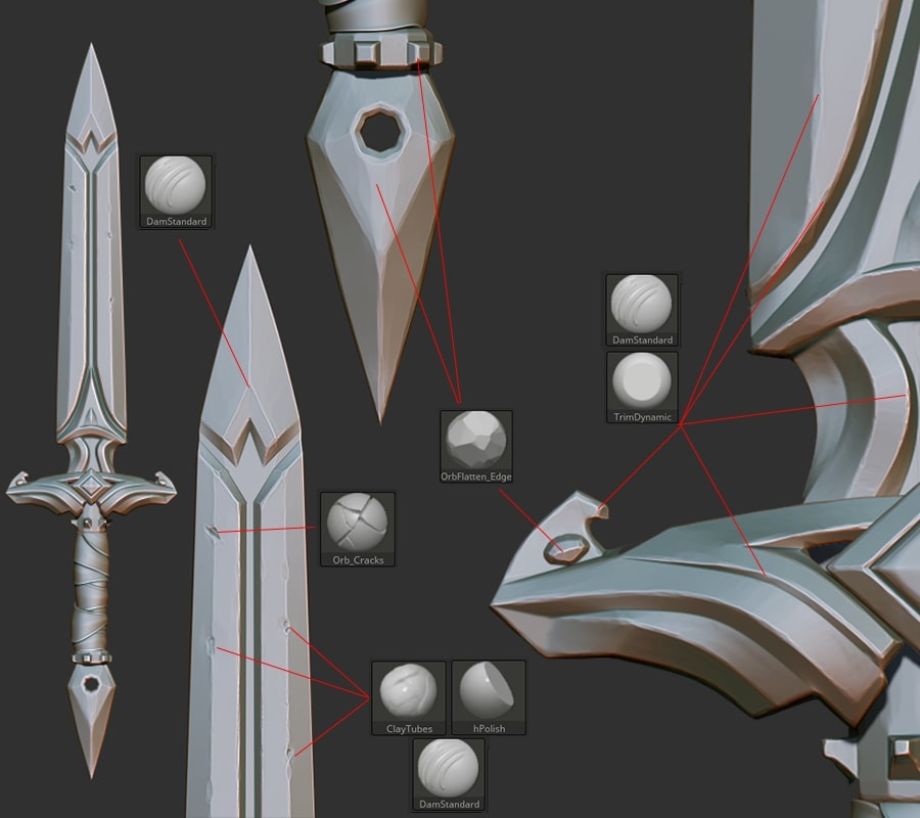 After the high poly was finished, I went back to 3ds Max to prepare UVs. Most of the sword is symmetrical; only the leather strips and the red handle do not share UVs. 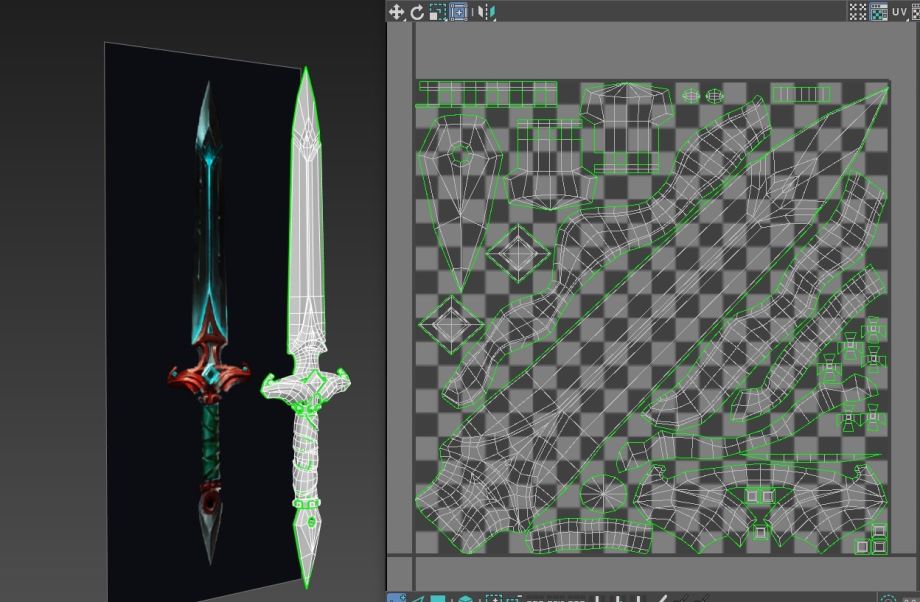 For the symmetrical parts, it was easy to get the right island and I got the right results with a planar projection and relax. For the leather strips, I had to make several cuts so that the program could do its calculations correctly and then joined each piece.

To get most of the UVs covered, I started by placing the larger parts, the diagonal sheet occupied most of the space.

Once the UVs were done, I took the high poly and low poly to Substance Painter and took out the Curvature and AO maps. Before starting with the textures, I made some arrangements in 3D Coat in the curvature map to solve small errors that I was finding or elements that were not completely well-defined. 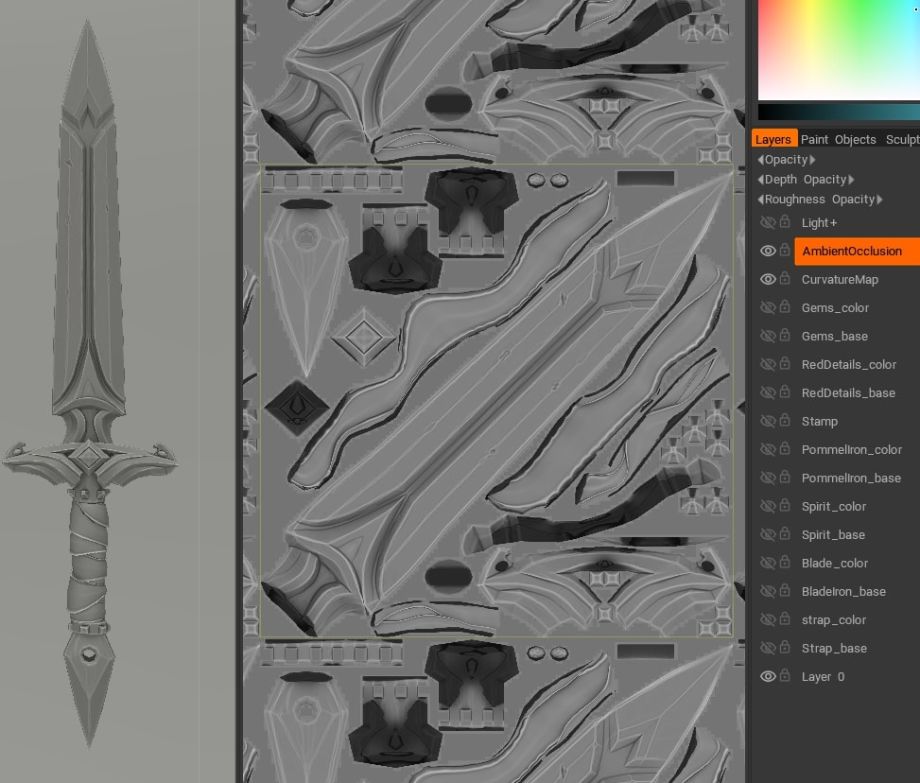 Simply with a couple of maps, we already have the level of detail that will help us when working on the colors.

When I have my texture maps, the first step I do is create layers for each material, the color I use is for guidance. These base layers will simply be clipping masks for the color layer. I took the entire color palette directly from the concept and added the key colors of each material with the pipette: shadows, deep shadows, lights, highlights, base color, etc.

Above the clipping mask, I created another layer for each material, and from there I was giving color with the standard brush. First, the base color, then with 100% opacity I placed all the colors in a rude way. Once I had the contrast, I started blurring and detailing with 20% opacity to unite the tones in a more natural way. 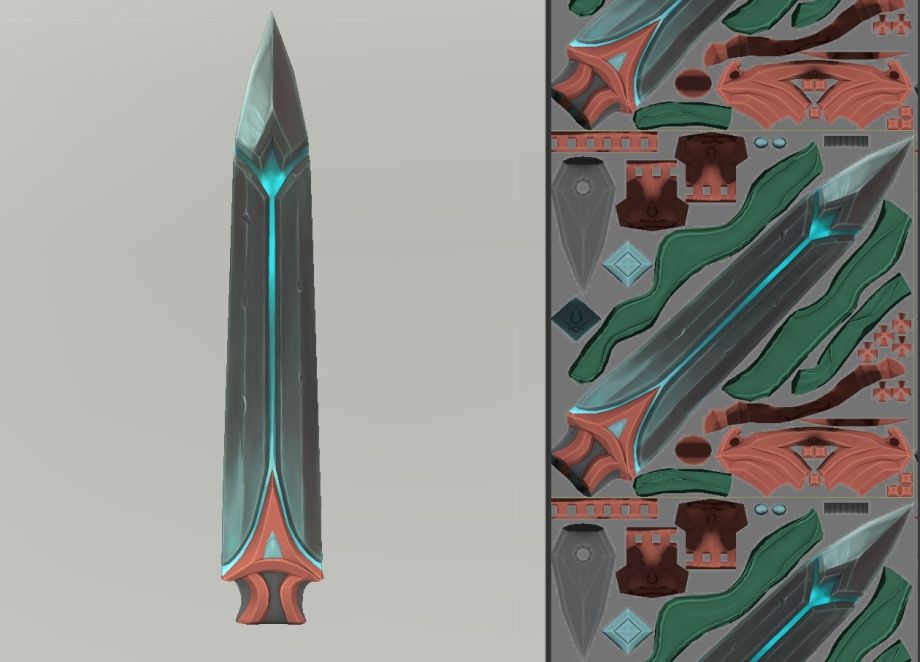 Texturing implies patience and time, you have to repeat the process with all the parts until they look just as you want them to.

And here is one of my favorite parts of the process – it’s time to prepare the scene for the render! For this, I analyzed Julio's concept in detail to detect the lights he had created and tried to bring it to my scene. I could see a whitish light coming from the right side of the sword and a directional light with a subtle hint of yellow. To color the shadows a bit, I used a reddish light for the right part and a bluish light for the left part. I also added an omni light in the center of the sword to generate that bluish illumination of the gems and the internal flow of the blade. 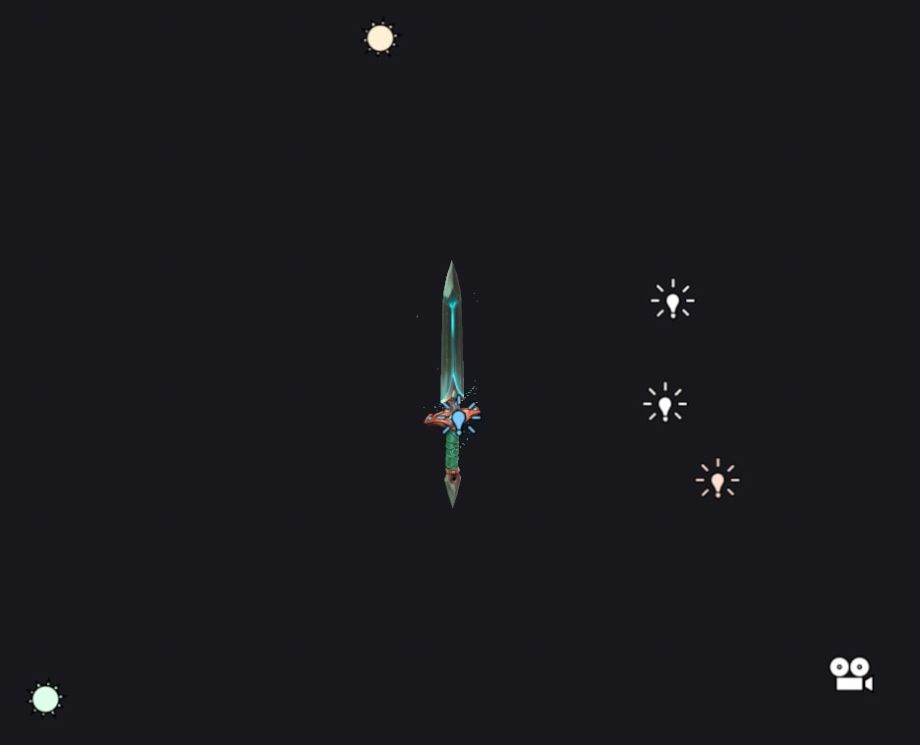 When working on post-processing, I wanted to emphasize the contrast with the background and the bluish light emanating from the spirit of the sword. For this, I worked with the emissive channel in the texture and the flare and bloom in the post-processing. I also added very subtle chromatic aberration and depth of field to enrich the perspective.

The particles I used were small planes with different sizes sharing the same UVs and a helix plane around the sword. I made this last texture in Photoshop, using the standard brush with a little to none opacity. 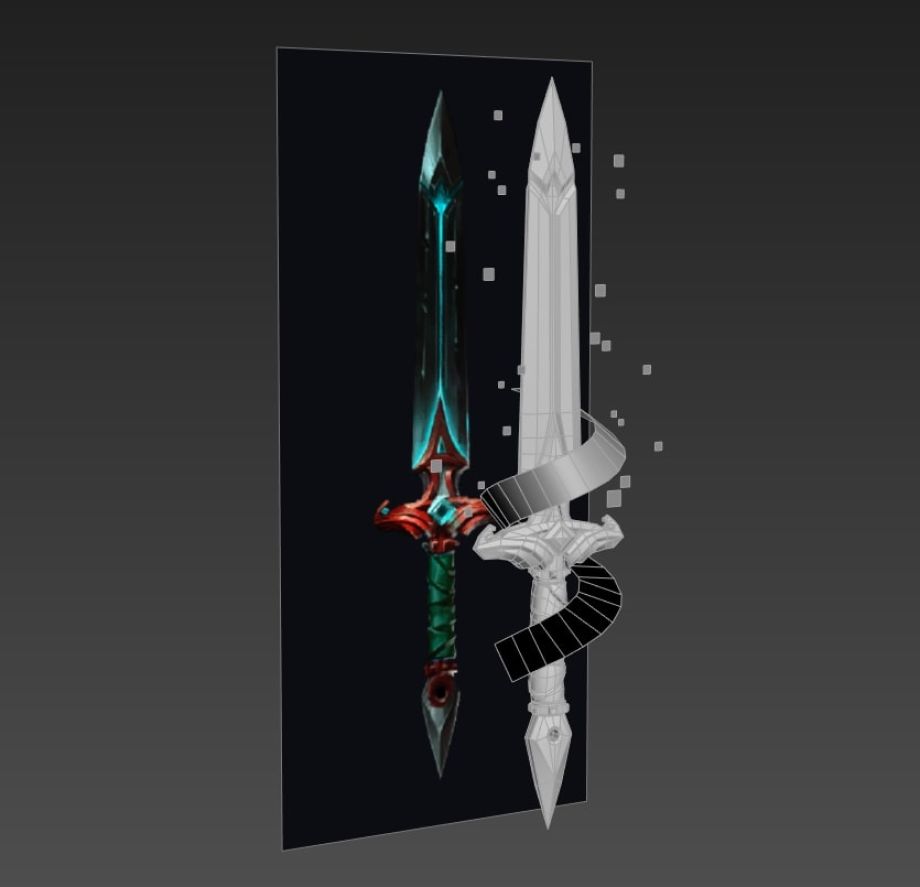 In this part of the process, I usually spend a lot of time trying different lights or post-processing settings to find what suits me the most. It's the icing on the cake.

And here is the final work: 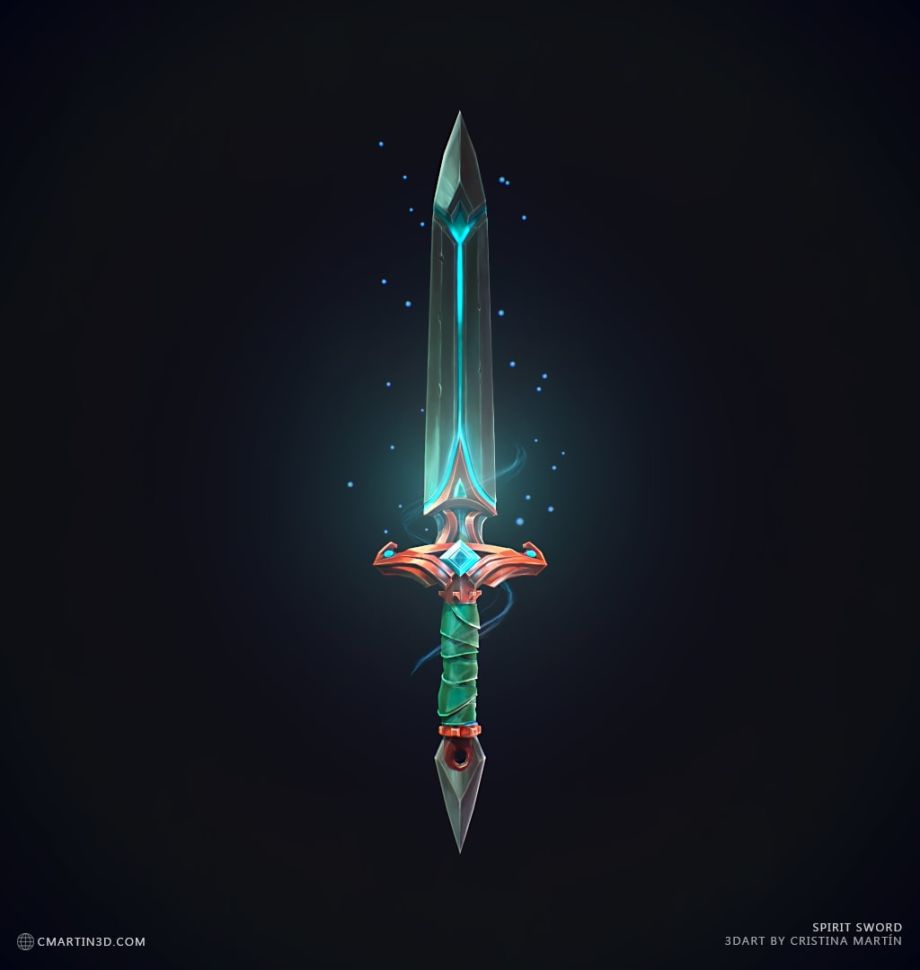 During the production, you have to learn to be patient and especially be critical of your own work. Asking for help or advice from other people is vital and very necessary when you are starting out. Improving the quality of your sculpting, your geometry, or your texturing can only be achieved with practice, through creating more and more pieces for your portfolio.

Trying to imitate the work that great professionals do can help you see what is most important in the process. I value this piece of advice a lot because it helps me improve my presentations every day. Sometimes, people forget about presentation, but I really think that there is a lot of art in it, You have to sell your product: the product is your capacity as an artist and it deserves a good presentation. Take your time playing with your lights, look at reference from great artists, and remember that sometimes the simplest is the best. You haven't spent a whole week on that character to get just a couple of screenshots.

When presenting my work, I normally use Marmoset Toolbag to take the renderings of the low model. For the high model, I use Keyshot. Depending on the job, I extract the renderings with transparency and finish mounting the image in Adobe Photoshop where I keep toying with the contrasts and colors in a more controlled way.