Marco Taffelli did a breakdown of the real-time character Dark Elf Assassin made with ZBrush, Substance Painter, and Toolbag.

Marco Taffelli did a breakdown of the real-time character Dark Elf Assassin made with ZBrush, Substance Painter, and Toolbag.

My name is Marco Taffelli, I’m an Italian Character Artist, born and raised in Novara, a little city near Milan. I studied at IED Milan from 2011 to 2014 and graduated in CG Animation.

After graduation, I had the pleasure to work at Ubisoft Milan for Mario+Rabbids: Kingdom Battle as a junior 3D character artist. It was a very important and exciting experience which allowed me to enter the videogames industry and see and participate in the phases of the development of a very ambitious game in a studio.

In recent years I have collaborated with Studio Bozzetto, a famous Italian Animation studio, where I worked on some TV spots and a TV series for kids. 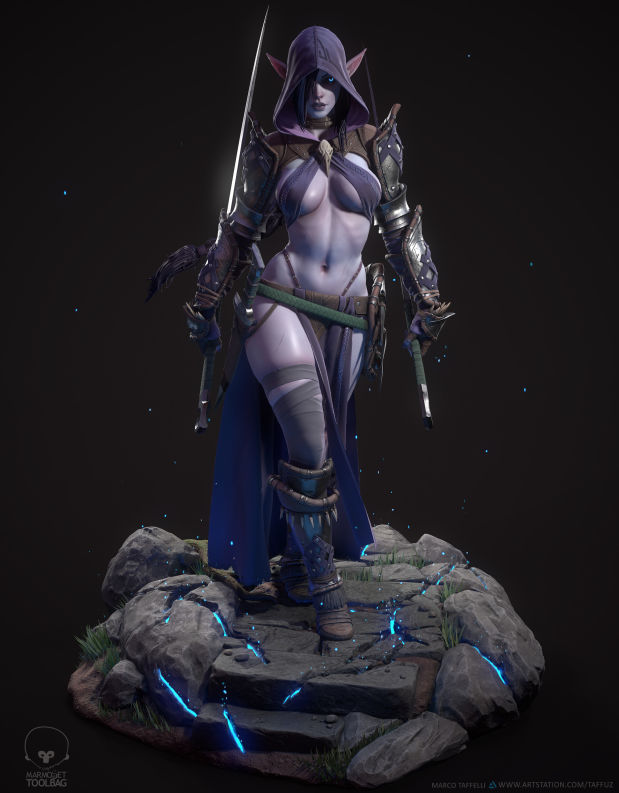 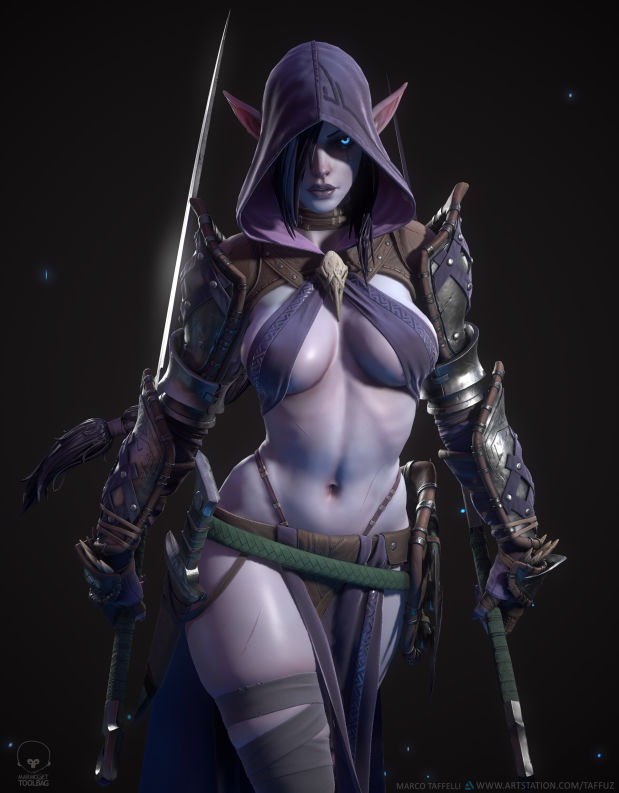 I started this project in 2017, requested by a former colleague who wanted a real-time character to animate, based on the amazing Thoot Wu concept. I accepted this challenge very willingly since it would allow me to work on a very interesting concept and improve my knowledge of the character workflow.

It took me almost two years to finish it because I wanted to achieve much higher quality than my previous works, so I took some time to learn new stuff and software solutions that I never used like Substance Painter. I also happened to rework some parts several times thanks to the feedback that I received.

Since I worked on it in my free time, I stopped the project for several months due to my job and personal reasons, but despite this, since I’m a very stubborn person, I really wanted to finish this piece without sacrificing the quality that I wanted to achieve.

My intention was to remain fairly faithful to the original concept. I really liked the design and the character mood, but I wanted to make it a little more real, trying to find a fair balance between stylization and realism. I started gathering many references of female models and athletes, and study works from other artists. Then, I started working on the face and anatomy from a Basemesh. It was important that the body was athletic and slim like the original concept, but I also wanted to give it a soft feeling, so I worked on some pressure points as the thigh, breasts and the hips.

Throughout the sculpting process, I have reworked the body several times, especially the face, because for me it was essential to be able to achieve a quality and a style that would convince me fully. Initially, I was going to make it more realistic – the face, in particular. It looked really bad and not very charismatic, so it was important for me to have someone who didn’t fear to give me negative feedback. Although it was sometimes depressing, that kind of feedbacks allowed me to do my best, note my mistakes and also go out of my comfort zone.

For this reason, the face took a fairly long time, especially because before then, I had never modeled a character with this style. I took the time to understand the best proportions to obtain a satisfactory result. 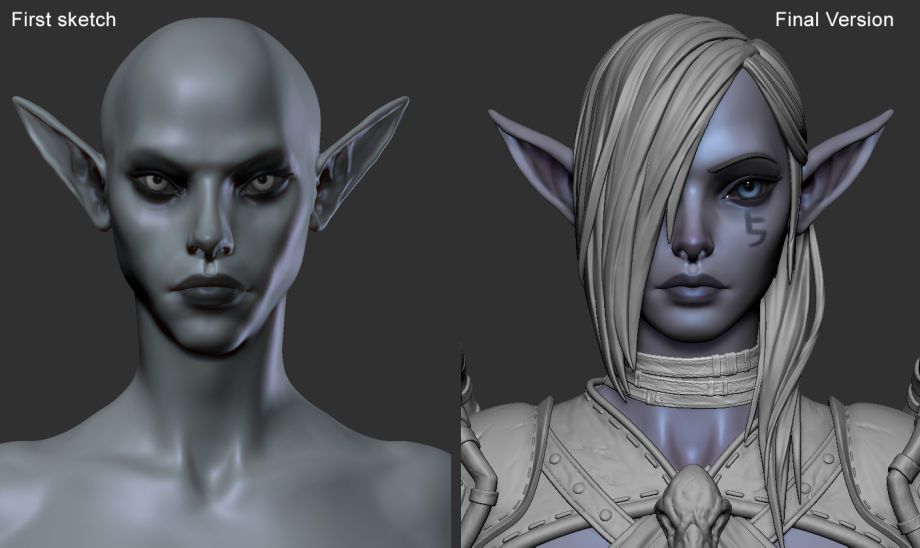 Most of the armor and garments was blocked in 3ds Max and ZBrush to find the overall proportions of the entire character. In this phase, I also sketched the parts that were hidden in the original concept. After that, I defined the meshes in ZBrush adding detail and sculpting the cloths folds. For the two pieces of cloth attached to the front and back of the belt, I made a simulation in Marvelous and then finished the pieces in ZBrush. 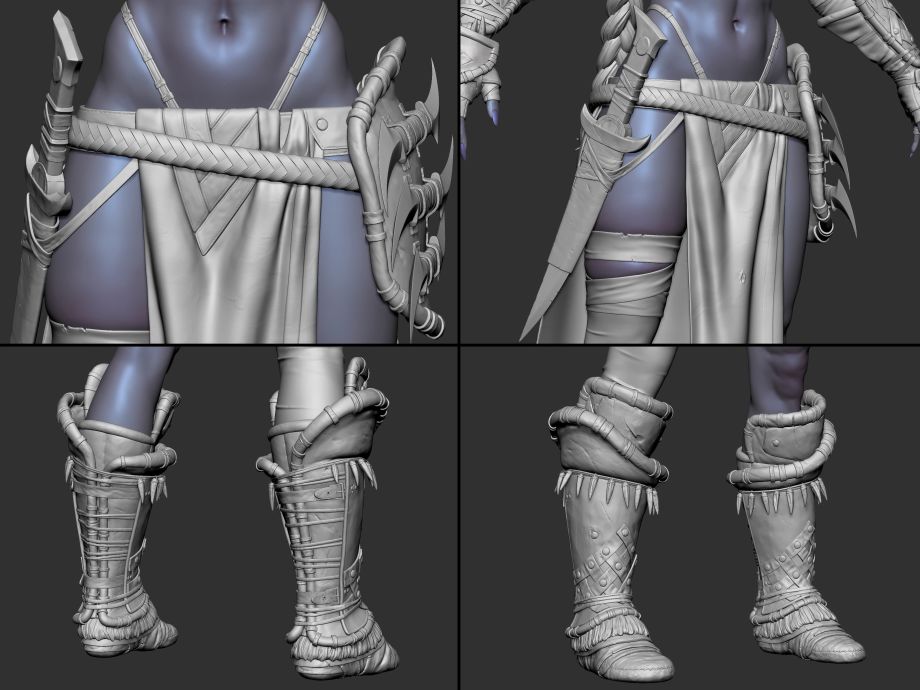 During texturing, I wanted to give the character a slight effect of hand-painting to avoid making it too realistic.

I started with baking all the textures in Substance Painter, then I exported the AO, Curvature and World space Normal maps in Photoshop and blended them together using the blending modes. I used the gradient map to make a color blockout and made a Base Color map with the hand-painting effect.

After that, I imported everything back in Substance Painter and finished texturing using smart materials preset that I adjusted for my needs, plus painted some detail by hand. 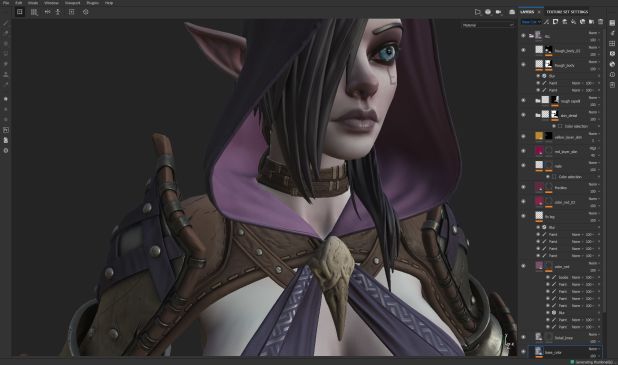 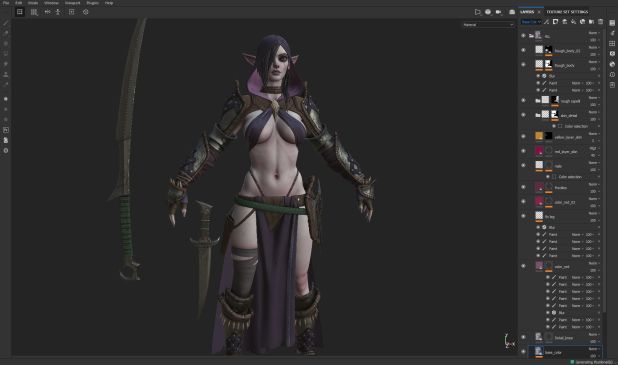 The skin texture has been harder than I thought because it had to be pretty clean just like in the original concept, and I had difficulty in finding the right shade and color balance.

I took the base color map that I created with Photoshop, and in Substance Painter, I added some color layers that I controlled through the masks, trying to make various contrasts and color variation in specific body areas.

For the skin details, I tried to use some displacement textures, but even if I liked the result, it was too realistic and it didn’t fit with the rest of the model. That’s why I limited myself to using only some normal maps that I’ve found in Substance Painter. I tiled them in some fill layers and I painted with the mask.

For this project, I didn’t want to limit the polycount too much, so the final low poly is 95k. I know that it may be too much for a real-time character, but my main focus was more on doing a really good piece and learn new stuff without worrying too much about the optimization. Despite this, as I planned it to be a real-time character, I still wanted to impose a limit of 100k poly. However, in some areas of the model, I could have done a better optimization, especially in the arrangement of the polygons to have a lower polycount without any loss of quality. 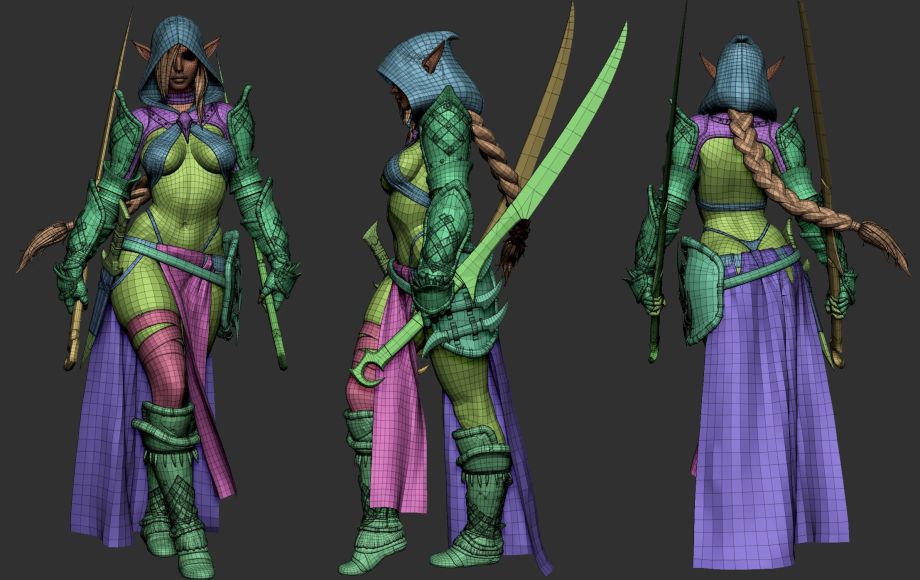 For the presentation, I wanted a strong and sensual pose pretty similar to the original concept. Since I didn’t have a Rig to pose the Elf, I decided to use ZBrush Transpose Master. Personally, I don’t find this method very comfortable for this kind of situation, but in my case, I had the possibility to have full control over the whole model without wasting time trying to make a rig on my own.

I made various poses, all quite similar, but with some differences, and after receiving several feedbacks I decided which pose to continue with and finished it.

For the renders I used Toolbag. I really love Marmoset Toolbag, it’s very simple and practical, you can make amazing renders with good shaders and lights.

The lighting was a big challenge because it’s very important to have a good presentation. You can have a great model, but a bad use of lights can ruin your work. Because of this, I think it’s really important to spend a good amount of time on the lighting set up. Very banal, but true. 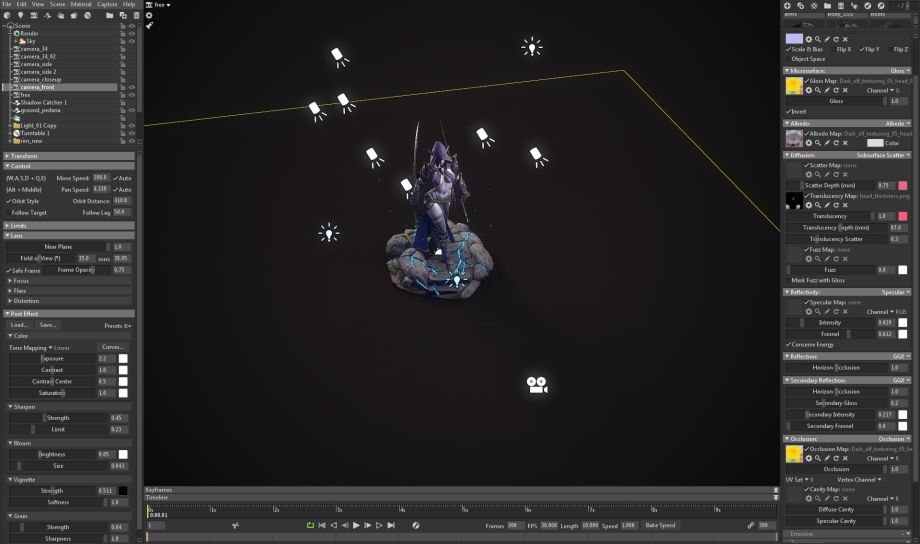 First of all, I set the camera changing some settings, then used the Mountain Sunset as skylight (it emphasized the purple color of the clothes and fitted the whole character very well). After that, I started to work with only 3 lights trying to create good contrasts and shadows that would make my model stand out from the background and create the mood. I loved the idea of having a part of the face in the shade to create a nice contrast with the eye’s glow.

When I was satisfied with the lighting setup, I added other lights aiming to better show additional parts of the model and get a photography look.

This Character was a real journey for me. I totally came out of my comfort zone, and I love the final result, but I also know there are many things that I could improve and do better. I did several mistakes and reworked different parts many times, but this process allowed me to improve as a character artist and prepare for the next projects.

I hope this article can be useful for someone, at least for those who have just begun to study character modeling.