Alexey Zemskov talked about the production of his impressive model of the famous Jackal gun from Hellsing. He discussed the 3d sculpting, the textures design, and other little details.

3D artist Alexey Zemskov from Great Britain talked about the production of his impressive model of the famous Jackal gun from Hellsing. He discussed the models, the textures and other little details of the production. 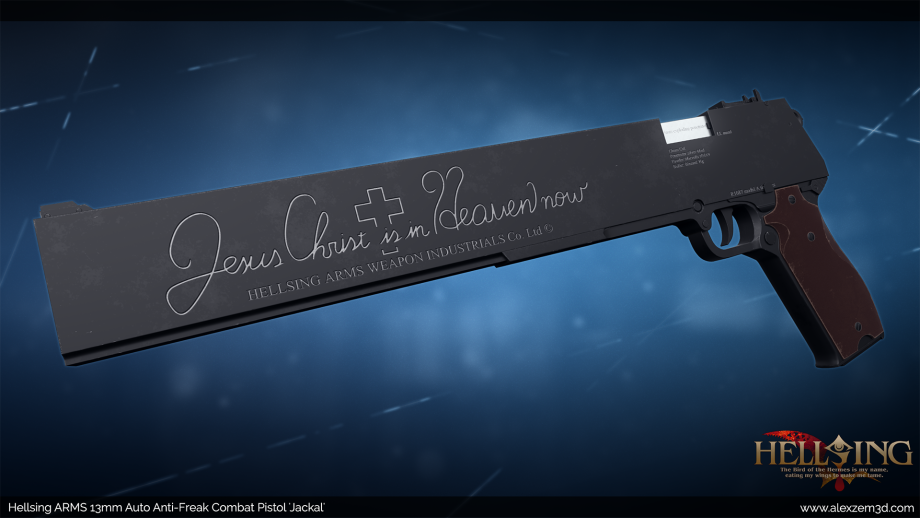 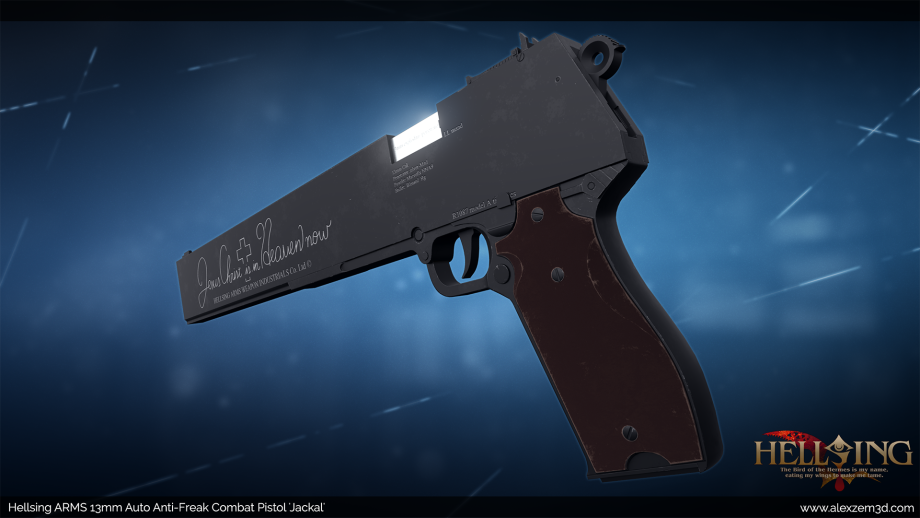 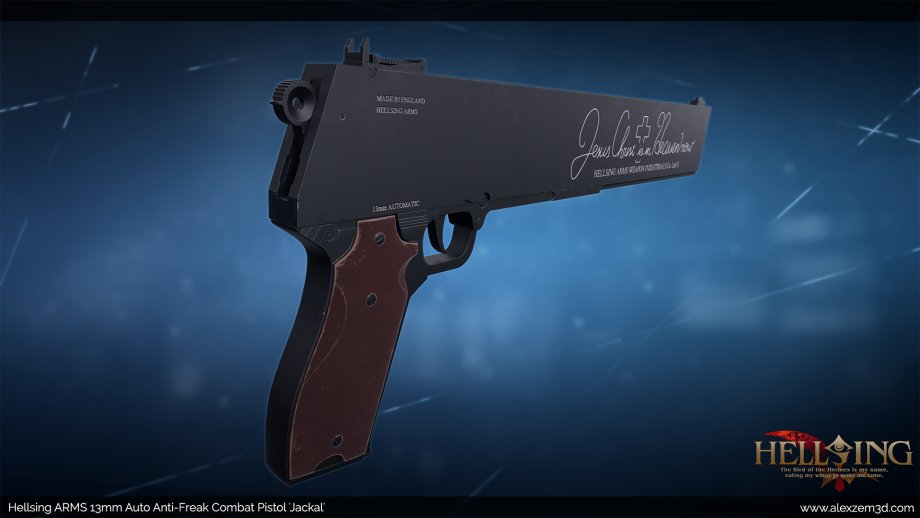 My name is Alexey Zemskov. I’ve graduated from Staffordshire University in 2015 with my bachelor’s degree in Computer Games Design. Since then I’ve been working as an Environment Artist at Playground Games, developing Forza Horizon 3.

While primarily specializing in development of 3d environments for games, I occasionally feel the need to delve into uncharted areas and try to do something out of my comfort zone. Before moving onto my next big environment piece, I wanted to make a stop and practice with Substance Painter in order to utilize it to it’s fullest potential when things will get serious. Considering myself a fan of Kouta Hirano‘s works, “Hellsing” in particular, I thought it would be a perfect opportunity to combine practice with tribute and create a replica of “Jackal”. 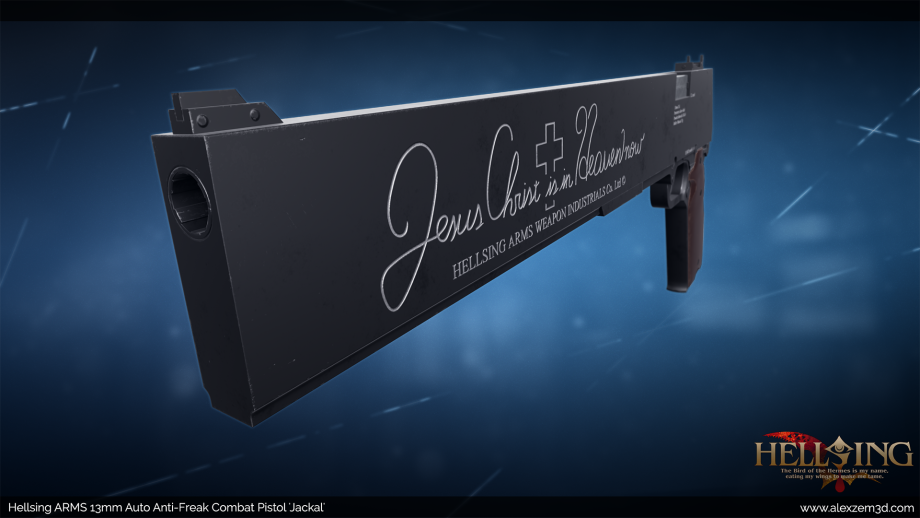 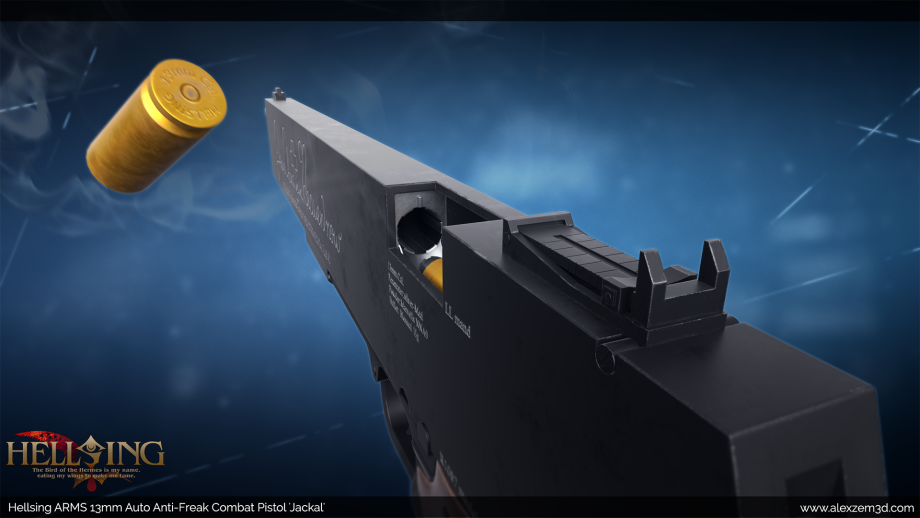 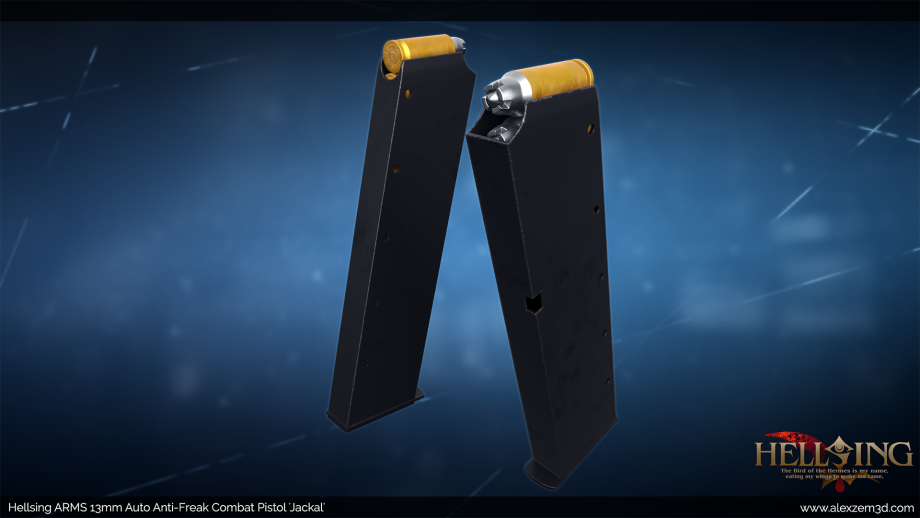 My main goal for this project was to replicate geometrical and texturing features that are seen on the rendered frames of “Jackal” in Hellsing Ultimate as closely as possible, keeping in mind that the final product could have potentially been used for animation or games.

As with any project, I’ve started with finding all necessary reference, which I actually found to be the hardest part of development. Considering the fact that there is Hellsing manga, TV series and “OVA”, in which “Jackal” is always being rendered differently depending on the source, I decided to give “OVA” version of the gun a go as it appeared to be a better model to get references from, featuring extra details on the side of the gun, while compromising on some interesting curvatures around the trigger,unfortunately.

Modeling process was pretty straightforward and was executed with utilization of 3ds Max and Zbrush.

After nailing down general shape of the model with base meshes, I have used two different techniques in order to transfer those meshes into a high polygon model.

In most cases I have used double-turbosmoothing technique, where I have assigned unique smoothing group to each individual face of the element in order to preserve it’s solid shape on specific surface and then filtered it with a set of two turbosmooth modifiers with different parameters in order to get nice polished effect around the edges. In most cases supporting edge loops were required to keep smoothing effects under sharper control. In few other instances I went with standard triple-edge loops.

Further down the pipeline some of the smaller elements such as hammer,safety,bullet,etc. were exported to Zbrush for manual polishing.

At first, Normal and AO maps were scanned from High to Low poly meshes in xNormal and then put into Substance Painter, in order to acquire World space normals and Curvature maps with built-in baking tool. As a matter of fact, throughout several tests of normal an AO scans in both applications, there were minimal to zero differences, so for the next project I will probably focus on baking everything in Substance Painter entirely, in order to optimize my production pipeline.

Before diving further into development, I’ve added a couple of quick normal details, such as screws on the handle, safety, as well as engraved text on the side of the slide in Quixel Suite’s nDo. While all of those details could have been easily added in Substance Painter, I had to specifically use nDo and Photoshop during this phase, in order to manually repaint one of the bigger engravements of the gun that had to be replicated in best possible way, and then used as an alpha to pull normal information into the gun.

Finally, I have scanned color ID map using 3ds Max, in order to start applying different material types on separate parts of the model, easily and non-destructively. All of text information that was already used as an alpha in nDo was also transferred on one of color ID’s. 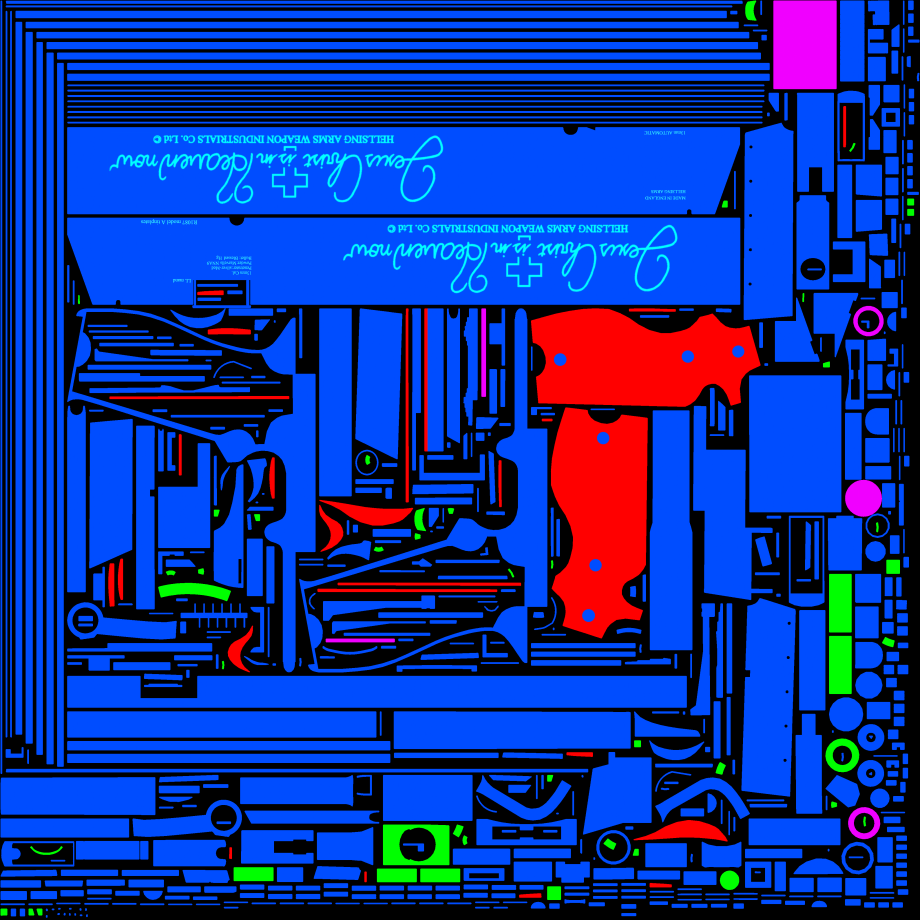 Here are final results for normal and AO maps. 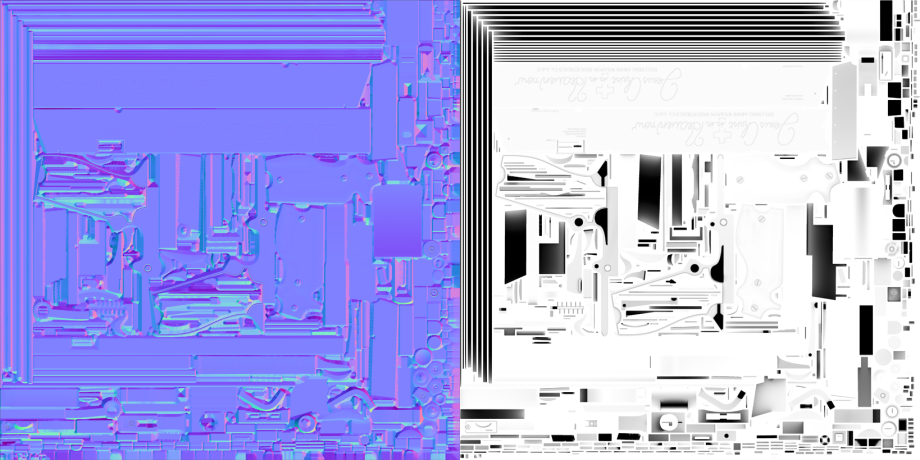 All of the materials were taken from default Substance Painter Material and Smart Material panels. In this particular case, “Steel Gun Painted” smart material was applied as a Fill layer on one of corresponding color ID maps and adjusted further down the development with a set of settings that you can find in “Properties”. The mask to reveal scratched surfaces around the edges was created with “MG Metal Edge Wear” generator, and then manually painted out from unwanted areas with “Paint” generator.

In the reference it was somewhat unclear, whether the handle was made out of glossy plastic or it was actually scratched wood. I felt like it would be a good idea to do best of both worlds and make hand-painted scratched wood with soft gloss that you would see only under certain angles. 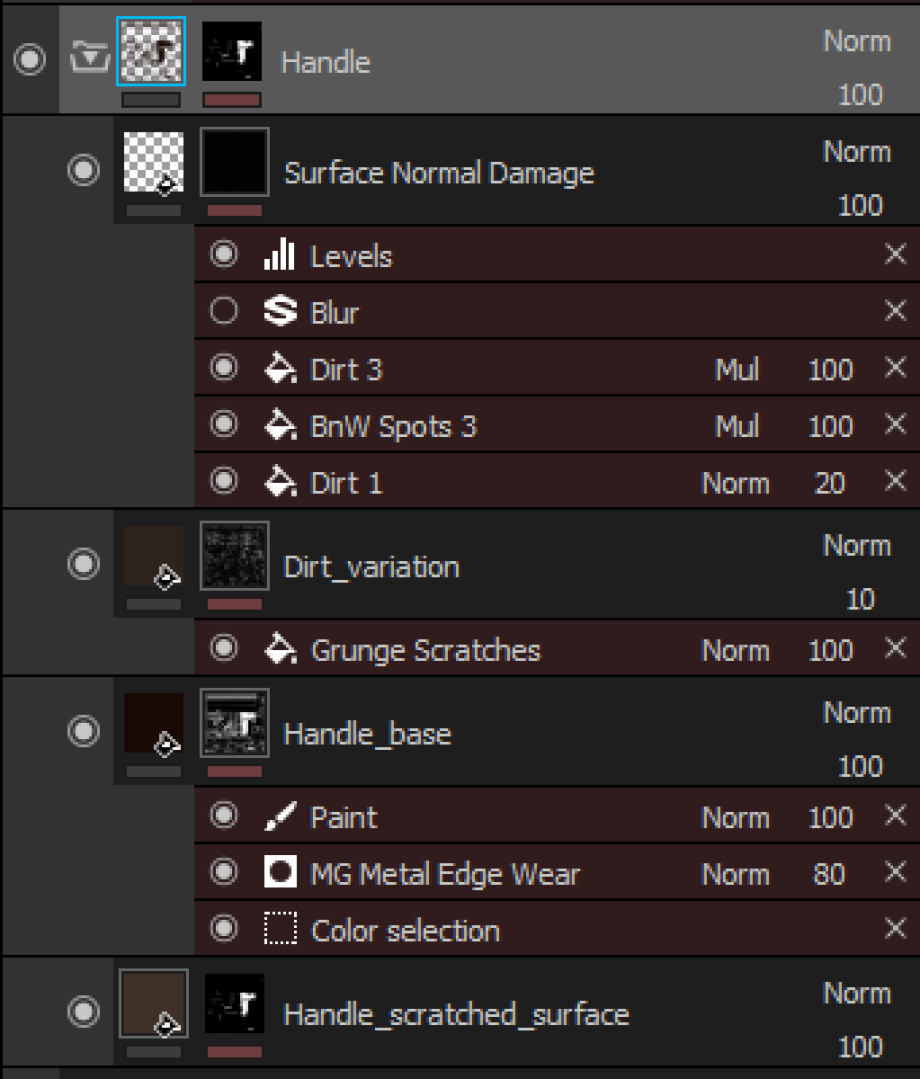 For this material I decided to start working only with base colors, and then progressively apply information on gloss,height and normal maps. All of the scratch information was achieved in a similar way it was done with metal by applying edge wear generator to create a base, which then would be painted out or in by using “Paint” modifier, revealing lighter variation of material underneath.

Looking at original concept where I’ve taken all inspiration from, I feel that I’ve tried to make the gun look more stylized than realistic, as real weapons should have much more intricate material definition and complexity.

I was initially going for realistic feel for the metals, but after seeing heavy grunge spots in the reference, I thought it would be a better option to leave metallic parameters in place, while suppressing some of the gloss information to reveal more of hand-painted base colors and grunges.

If I was about to create a full-on realistic version of this gun, I would have probably relied more heavily on photographic resources of real guns, rather than the shots from an anime.

I am somewhat satisfied with the results, however, after receiving some feedback I feel like it would be a good idea to calibrate some of my materials a bit more, before I will import everything into Marmoset 3 when it will eventually come out, to make final video renders for this piece. For now I’ll just keep on polishing and moving on with my future endeavours.

HOW TO MAKE 3D GUNS FOR FPS GAMES?

UNREAL ENGINE 4 WILL BE USED BY THE MILITARY